OK, as promised a couple of days ago I thought I’d take you on a little guided tour of the Extrawheel trailer I’m taking to S America with me….. Being busy (lazy) I hadn’t actually got around to sorting out the coupling and so on until today, it’s done now and I’ll take it for a road test tomorrow.

The whole thing is incredibly simple and very light – a 26″ wheel (other sizes available) bolted into a light tubular steel sub-frame with a plastic and stiffened cordura (at least it feels like cordura) mudguard, with an adjustable mesh sling hung each side. It comes with heavy duty roll-top dry bags for carrying your luggage and these just get stuffed in the slings.

The attachment to the bike is just via a special quick release lever (included, as are alternative nuts for bolt-on axles) with ball end, complete with little rubber covers for when the trailer isn’t attached. 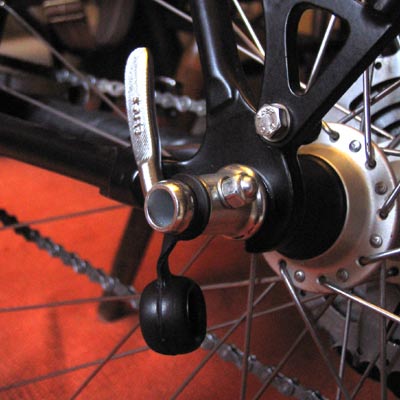 The trailer is attached with a springy y-shaped yoke with concave bushes on the ends that spring over the ball ends on the quick release. The trailer end of the yoke similarly springs (but in a vertical plane) over ball ends welded to the sub-frame. Adjustment and set-up of the whole thing took about 5 minutes, and now it’s done attaching and detaching the trailer only takes a second or so. 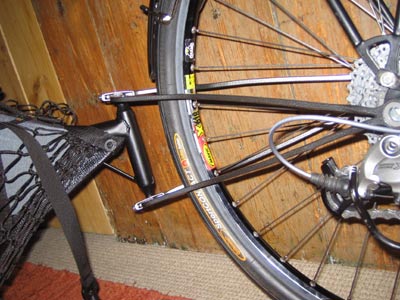 The whole thing makes for a very neat and simple package that should cope well with rough terrain. The max load is rated at 30kg which is more than enough for me with all my camping gear. 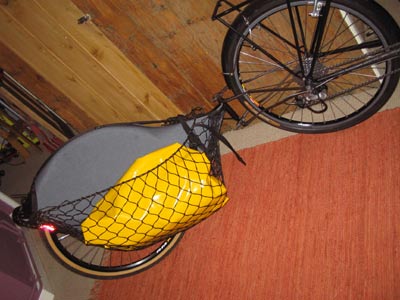 If I have got a criticism it’s that the wheel use a bolt-on axle which means that for handling punctures or swapping tyres with a damaged one on the bike I need to carry an extra spanner to suit which doesn’t double up as a tool anywhere else on the bike. Ideally it would come with either recessed allen bolts into a hollow axle or a simple quick release. I won’t bother to change it for this trip but when I come home i’ll either swap the axle for a hollow one and QR or build a new wheel around a QR hub, probably XT to share some common parts with the hubs on the bike. 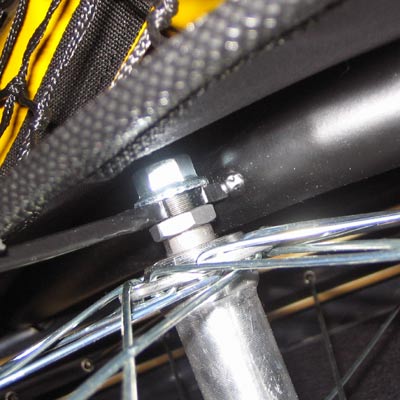 I’ll give you a ride report as soon as I can though the real test will be 2 months in the Andes. In the meantime though there is a pretty useful write-up over on the BikeRadar site.

3 thoughts on “a look at my Extrawheel”