looking at my scribblings below for the last few weeks you could be forgiven for thinking I wasn’t doing any riding… it’s not true, I am.. I am just not writing about it. Nothing has changed in my cycling world… my DeSalvo fixed gear keeps on going.. as does my Storck – I’m happy with everything as it is so there are no new parts to play with or stories to tell. I’m putting in a few miles on my Nomad too just to be sure that I’m happy to commit my skinny arse to 3 months on that Velo Orange saddle (I am). At the cafe on Saturdays fixed gear outing I was chatting with a friend about the cost of cycling.. I’ve pretty much got over my bicycle lust problems of a few years ago and my DeSalvo is so cheap to run with just the occasional chain, sprocket and rear tyre that I’ve fallen out of touch with what the roadie world is charging folk these days for the privilege of riding what is marketed as top flight kit… Take road tyres for example, I guess a top end race tyre (clincher, I’ll not mention tubs as they’re a factor of at least 1.5 times more spendy) these days averages around £35-£40.. all for approx 200gr of rubber and kevlar that may last 2000 miles if you’re lucky.. so how is it that I can have 1kg of rubber and kevlar in the form of a Schwalbe Marathon, with a life of at least 10,000km, on my Nomad for.. £40? The manufacturers no doubt will quote that nebulous concept called ‘technology’.. oh really, like the hi-tech kevlar belt that costs less than £1/metre? Or they’ll quote threads per inch in the casing.. honestly, does it really make a tyre £20 (for arguments sake) more expensive cos the casing uses a thinner cotton thread woven a bit more tightly by machine..? Hmmm. We talked about all sorts of crap and then got around to bike frames… it’s quite easy to drop £3500 on a race bike frame these days. £3500 for some 900 grams of carbon and “technology”.. I’ll not dispute there is some involved engineering design in a  good bike frame.. I am an engineer after all… and manufacturers will say “oh but the price of carbon these days is very high”.. indeed, around £30/sq meter for a good quality twill, lol. So how does 900grams of carbon in the form of a bike frame cost roughly £1000 more than the 25kg of carbon in my Tiderace? The Tiderace is also a very highly engineered moulding and the design of the boat itself to give it the characteristics is has is no trivial matter. There’s tooling of course, a bike frame needs high quality tooling.. but they’re churned out in the 1000s.. my Tiderace also has similarly well engineered tooling.. and is turned out in the 100s. Are certain manufacturers having a laugh…? As I’ve heard said many times in the past.. “expensive paint on a <insert any well known brand of Italian/Canadian/French bike frame)..”. Oh and the next time you see “aerospace technology” quoted by the marketeers it’s worth remembering that wood and string was aerospace tech not that long ago.. and in some cases still is :-)

Oh well, rant over and what started out as a cycling post has managed to bring kayaks into the picture too.. so I may as well carry on in that vein. October has brought some fab weather to Cornwall, we did have a spell of gales which made the Cornwall Sea Kayak Symposium a somewhat windswept affair but since then it’s been cloudless skies and light winds. Yesterday off Lands End was probably the most perfect October day I can remember with not a soul on the water… I do like rough seas to play in but when it is like this Cornwall feels very special :-) 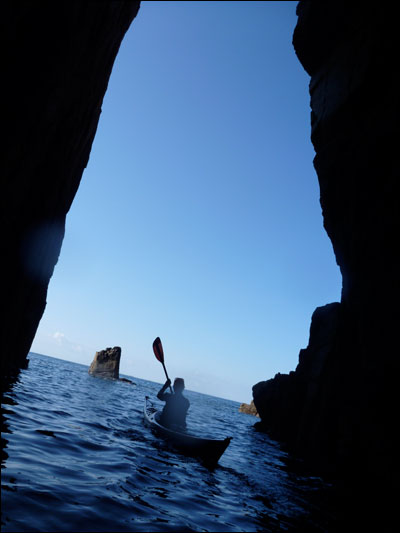 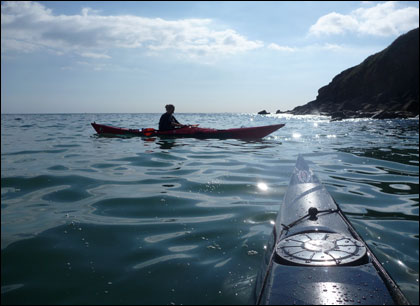 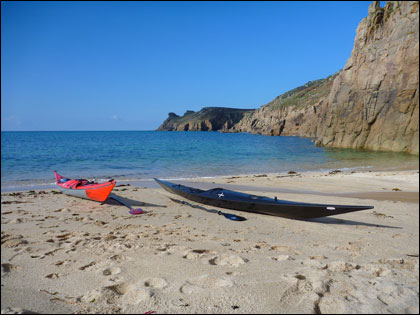 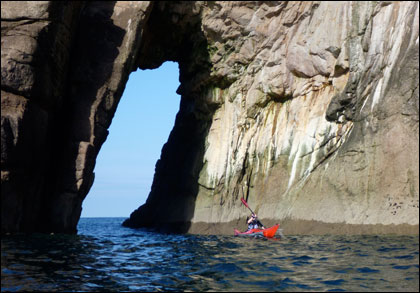 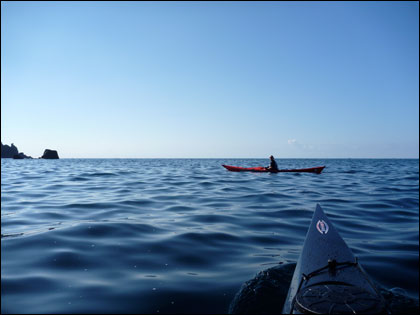 We were shadowed by some seals for a while near Nanjizal, one in particular was very bold swimming close alongside, upside down just below the boats and even tapping it with his flippers. Not sure if he was just curious, playful or feeling particularly randy… and if he was who would blame him, haha, Keara, in the pics, spent 6 weeks earlier this year kayaking the Inside Passage on the Canadian west coast and is shortly to depart on an epic bike ride from Goa to Ireland.. hmm, some people eh? hehe.. When I return from Patagonia in March I’ll be sorely tempted to sling my bike straight on another plane and fly out to meet her and her brother on the road somewhere for a few more weeks of pedalling.. I’ll see how the ££ are going, I am aware of the fact that at some point in the near future I need to figure out a way to earn some wedge again, preferably doing something I like :-)

2 thoughts on “of bikes and kayaks…”