as my time in the Hebrides this summer drew to a close thoughts inevitably turned to the coming winter at home in Cornwall. Having spent the best part of the last two winters away on my bike in South America I could not help but dwell on what winter cycling in Cornwall means… i.e roads lagged with soppy mud & cowshit and lots.. and lots of rain. I persuaded myself that I needed a new winter bike to help me through the dark months.. the reality of course is that I don’t need one, I have one that still runs just fine other than needing a new chain & sprocket. But I wanted one… a condition that will be familiar to vast majority of cyclists I think. I didn’t want any bicycle however, I wanted an orange one. Orange, to my mind, is a brilliant colour for a bike but it has to be all over orange and not sullied by too many decals or contrasting bits. Indeed I have wanted an orange bike for many years now but could never find an excuse. In my cycling career I have only ever owned one orange bike.. at least I think only one, there have been so many over the years it is quite possible I have forgotten one.. oh wait.. correction, I have only ever owned two orange bikes in my cycling career. The first was a Raleigh Meteor with 5 speed Huret gears and cottered steel cranks, bought in 1984 from a bike shop in St Austell run by a pair of pedantic duffers with grating accents from a place quite well north of here… I hated them but my father thought they were quality folk so I had little say in the matter. The other orange bike was a Trek 8500 MTB bought in Montreal in 1998. It was a fabulous shade of orange which complemented it’s fat aluminium pipes and polished XT groupset wonderfully. I loved that bike, a friend of mine bought it off me a couple of years later and he still has it.. it is sitting unridden &  in almost mint condition in a garage somewhere north of Toronto now and I would love to have it back.. but so far my efforts in that direction have failed :-(

A couple of years ago Salsa had a bright orange scandium cyclocross frame in their catalogue. I nearly bought one .. on many occasions but given I already had a titanium cyclocross frame I could, sadly, never quite get past the potential credit card shock. Such a shame, it was a lovely looking machine.. so long as you only used a campagnolo groupset… not like this: 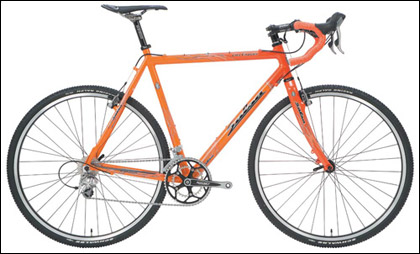 Nothing to do with winter training I have also been rather taken of late with the Surly Troll.. just the thing for an epic adventure somewhere.. and indeed friend Cass Gilbert has been using his for many months now in Latin America and rates it highly. The only thing is I have a brilliant expedition bike, my trusty Thorn Nomad that has been on so many adventures I could not bring myself to sell it. I could get it stripped and powdercoated orange I suppose.. but it wouldn’t be the same. I’d have to find an alternative niche for the Troll.. it has horizontal dropouts so conceivably I could build it as a fat-tyred rigid fork steel fixed gear. Quite perverted. Quite appealing… and ripe for conversion into a full on expedition bike for a future trip, say a return to the high mountains of the Himalayas… <cough>  while my Nomad enjoys a leisurely retirement in Cornwall. Hardly a winter training bike though… 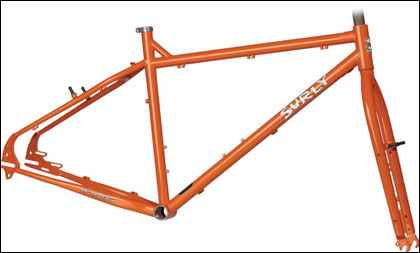 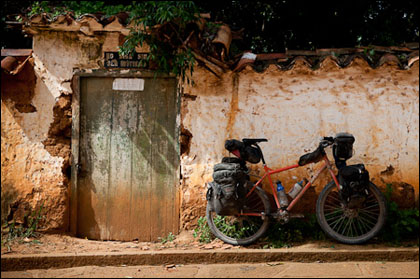 So back to the winter training thing.. I have, on many occasions, also tried to bring myself to fork out for a Genesis Day 01 Alfine.. it ticks a lot of important boxes… i.e it is a very nice shade of orange and it has eyelets for full length fenders.. but with that hub gear it has 7 gears more than I really need and the stock shitbongo shifter is soooo ugly. I suppose I could swap it out for a Jtek bar end one but it doesn’t get past the quite strange idea of having a winter bike with more than one gear… There is a singlespeed version that is an easy fixed conversion.. but it’s yellow. Ugh. 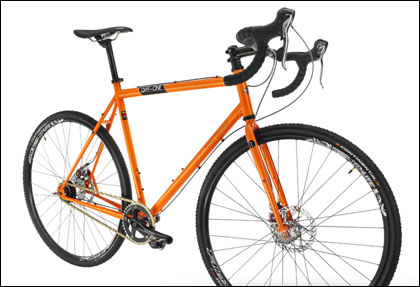 So my ideal winter road frame then is orange, it is steel, it has track ends, spaced at 120mm and it has eyelets for full length fenders/mudguards. Such a beast doesn’t appear to exist. There are loads of cheap steel fixed gear road frames around but they all miss a trick by not having eyelets, can’t understand given the utility they offer for winter training. None of them are orange either. So I suppose I have two choices.. buy a cheap steel track frame like a Genesis Flyer or On-One Macinato and send it off to a frame builder to have eyelets added and an orange coat of paint.. or I just stick with what I have for another winter. Or, and I know I can’t count, I build up a Troll and avoid the winter problem altogether by buggering off on another expedition with it…. oh, dammit..

Or I could get something in lime green.