oh dear, it has been a couple of weeks since I sat down at my keyboard with the purpose of populating these pages with more words and pictures.. It’s not that nothing worth writing about has been going on, it’s just that the brain cell has been otherwise engaged you see… when it’s not been waterlogged. Autumn in Cornwall always brings good surf and the last few weeks have seen some cracking surf, nice, clean, consistent waves with faces up to around 8-10 feet – the point at which my present ball-size threshold is exceeded – with one spectacular day of 30ft which I enjoyed, quite sensibly, by staying mostly dry. Anyway although this is a topic related to paddling I do digress… so back to back in the day, or something.

Of late I have been reminiscing somewhat about past adventures.. Probably something to do with approaching my thirtytenth birthday next spring.. and dark winter evenings of course. I came across some pictures of an interesting, albeit minor, episode in my paddling career. Back in 1996 I found myself “shipwrecked” with a couple of friends for approximately 6 weeks among an inaccessible speckle of tiny islands, at the time barely inhabited by a few fishermen, lost in the Indian Ocean off the coast of north west Sumatra. I had a wonderful canoe borrowed from a local fisherman, fabricated in wood and bamboo.. and this became my vehicle for exploring the network of islets, tidal sandbanks and coral reefs of the area. Despite leaking rather badly it was a wonderful thing to have, I was happy as larry out there amongst the turtles, dolphins, sharks and so on. Looking at the pictures now I cannot help but think how much fun it would be to build a replica here to use for a spot of fishing and messing about down at the kayak club of a summer evening. Only thing is I have no idea where I can lay my hands on those fat bamboo poles here in the UK… I’d love to hear if you do know. 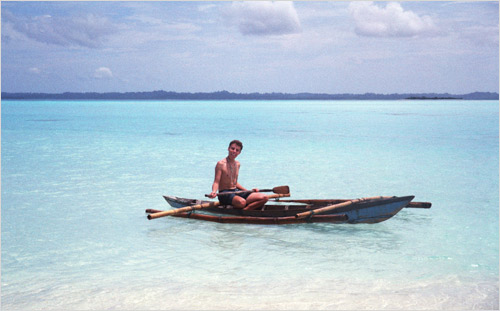 perfect for a simple life.. a very simple life, I had 'nothing' with me.

stopped on one of the many tidal sandbanks between islets 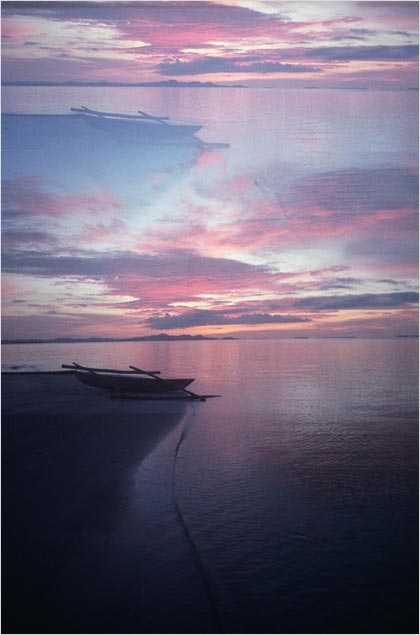 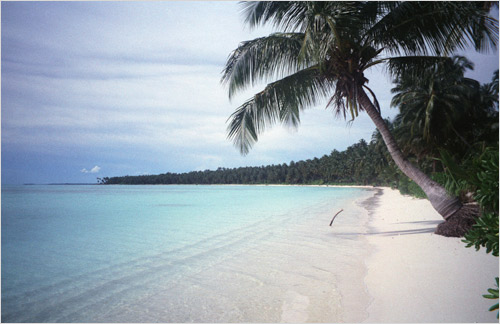 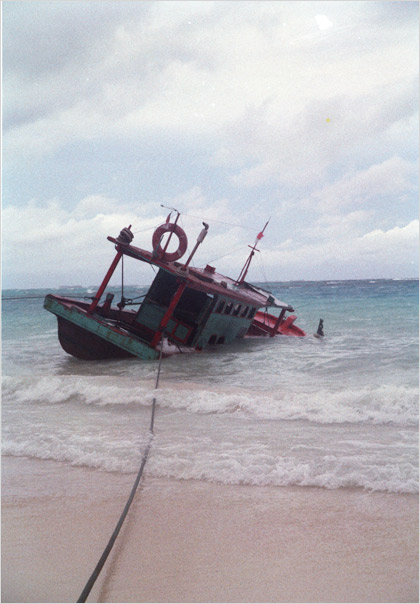 we lived pretty much off fish, coconuts and biscuits.. until one night a storm brought this Indonesian fishing boat in.. she had a cargo of illicit beer (Aceh province is very islamic.. hence dry) on board.. hurrah!

evening entertainment consisted exclusively of lighting a fire and watching the sun go down before bedding down under the palms. Some nights huge electrical storms could be seen over the invisibly distant mountains of Sumatra

When I finally managed to leave I had less then US$10 to my name.. it was a day and half of hitching by fishing boat back to the mainland then 3 days across the rugged interior of Sumatra to Medan on the east coast. Where there was a bank. Happily.

Sadly this group of islands was hit very hard by the tsunami of 2004. The main village on the ‘big’ island lost something like 300 people out of an already tiny population. Sometimes I think I would like to go back but research shows that there is a little more development there now with a more regular boat service so to revisit would only lead to disappointment I think. I shall stick with the memories… and perhaps a wood & bamboo canoe ;-)

Now, on a sort of related topic.. I’m not one generally for writing about what other people are writing about, blogs should be for original content in my opinion.. but this is a special case, especially for those of you interested in the Greenland tradition of kayaking and hunting. Another chap has been reminiscing about past adventures involving kayaks, but on a much grander and more involving & worthwhile scale than my self-indulgent  little journey down memory lane. The Hunting Trip to Umiamako is the story of a summer spent with the inhabitants of the west Greenland village of Illorsuit.. in 1959. The photography and narrative are a fascinating read and wonderful insight into a disappearing way of life. Clicking the image below will take you there.. <highly recommended>