it’s that time of the year again.. a year ago I had been exploring the Valle de Los Exploradores on my bike before returning to Rio Tranquilo to camp on the shores of Lago General Carrera with some Swiss cycling friends. The weather was unexpectedly warm and sunny, and as I gaze out of my window today at the grey rainy crap that has characterised the end of 2011 here I feel I would not mind being somewhere else, on my bike. However.. it’s not all bad, in fact it’s all good. 2011 was a brilliant year with lots of bike riding in Patagonia, a summer afloat in the Western Isles and now a new business venture to think about, I wouldn’t have had it any other way. The business side of things is growing slowly, I’m working on a project that will be a really good one to have in our portfolio – a site for a recruitment agency with all the online jobs management, resources,  applications and so on that entails together with an online timecard submittal application. It’s not particularly complex but there’s lots to think about so my braincell, when not occupied with basic motor functions like breathing, is getting plenty of exercise. As such I’m starting 2012 with a very positive outlook, which experience tells me is more than halfway to having a good year regardless of what happens.. I have freedom, I have work to do, I have expeditions to plan.. and I have a bicycle(s) :-) 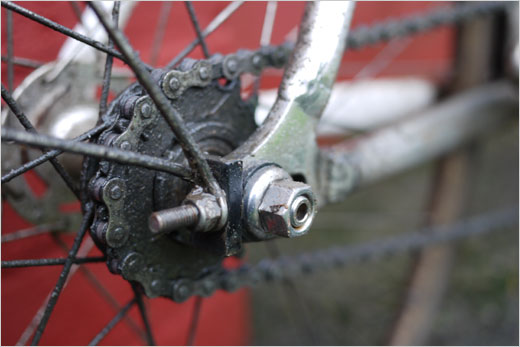 a fixed gear.. totally the way to go in winter.. IMO. Heavy rain keeps the muck level at an acceptable equilibrium and it just keeps on working

Anyway, enough of that… some cycling words I think might be in order. Despite the first part of the year on two wheels in Patagonia 2011 was my shortest cycling year for a very many years.. just 4000 miles/ 6400km, less than half a ‘normal’ year. I was tired after Patagonia and then that summer paddling meant I didn’t turn a pedal for almost 3 months… and come late September/October I was worn out again. The short year has done me some good I have decided, despite hardly riding at all of late, around only 5hrs/week on my fixed. Having been out for a stiff, hilly spin on my fixed gear with friends, on their geared machines, seems my legs are still a match for Cornwall’s climbs on a brisk group ride…. happy about that. Less happy about the state of my winter hack which I have come to know somewhat affectionately as my ‘rattle and squeak’..  it goes fine, it’s just not quite as sorted as I would like. The BB is seized in the frame, but the frame is of such low value I can’t be bothered to do anything about it, instead when the BB (a Miche track) dies I’ll use it as an excuse to bin the frame and go back to a steel frame for winter.. knowing my luck it’ll probably last 10 years when really I would be happy with it failing tomorrow. The integrated headset cups in the frame also seem to have become less of a tight fit for the cartridge bearings so even when adjusted properly the headset has some play in it. This is a weird one that I have not seen before.. the bearings themselves are fine and when packed well into the frame with grease there is still play. I keep meaning to pack them in with some of that teflon plumbers tape but I haven’t got around to it… mainly because to work on the bike I need to wash it…. Washing winter hacks is not my forte, because it’s a bike I don’t really care about, and because the roads are so perpetually wet and filthy there doesn’t seem much point. Being fixed the drivetrain just works and works and works regardless of how minging it is, provided I maintain correct chain tension and give the chain a wipe and drop of lube every now and then. It’s the one bike that lives in the garage rather than indoors and I swear it throws muck at me every time I stray within 5 feet of it. I felt quite ashamed on Thursday meeting up with a buddy for a ride… in the rare patches of sunshine his winter bike freshly washed and all gleaming paint, chrome and polished alloy served only to make mine look quite rubbish, splattered with mud and shit as it is. I was asked if the rims were really a gold colour or was it just the dried on mud.. they are gold coloured but they would have looked just the same regardless of their colour. I might wash it this weekend, it does brush up quite well.. but then again with more rain and hence mud in the forecast I might not… Maybe if I accumulate enough dirt on it I’ll feel the best way to deal with it is buy a new frame anyway :-) 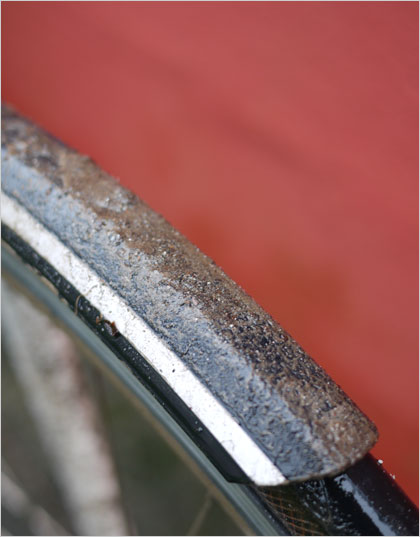 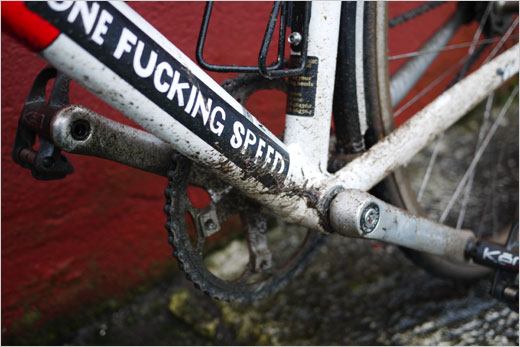 .. and a colony of dung beetles around the BB to take all the cow and horse shit away.. though most likely they'd end up burying the entire machine. The last of my OFS stickers too..

Speaking of bikes a buddy in Canada sent me a pic the other day of a newly acquired steed.. I know he won’t mind me using one of his pictures. It’s a nice classic machine equipped with a mix of vintage Campagnolo and Shimano 600 (oh well… perfection is hard to come by) and as you’d expect of a nice steel frame rides beautifully. He bought my Merlin Extralight a few years ago and says it is comparable to that. A very nice find for not very many $$$. A thoughtfully chosen background too. Back in the days before carbon and titanium I used to race on a Basso Loto, built in Columbus SLX and equipped with a very shiny Campag Chorus groupset, among the very first of the 8 speed groups Campag made.. I was a student at the time and couldn’t afford Record. I regret selling that bike, it was a beautiful thing to ride.. as well as look at. I also feel stupid for selling the Merckx Corsa Extra SLX frame I restored and turned into a fixed gear machine with a sublime ride – a buttery feel that can only come from a fine steel frame…  It’s hard to find frames like that now at a sensible price but at the time it felt like the right thing to do as I had 11 bikes in the house and was feeling somewhat ashamed about it… which on reflection was stupid too :-) 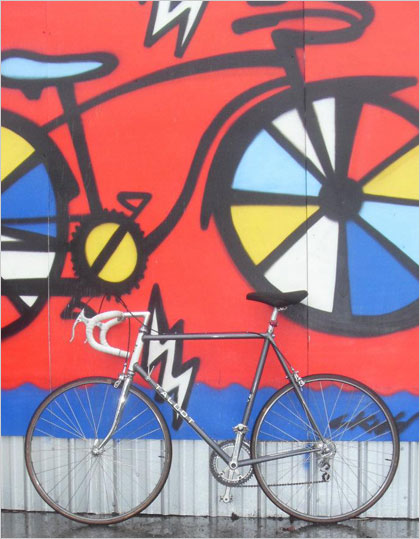 Right that’s enough from me… I wish you all a very Happy New Year and I hope all your dreams and aspirations come true.

Some pics of that Merckx follow below. Just because it was such a pretty bike and I don’t think I have ever posted them on here… 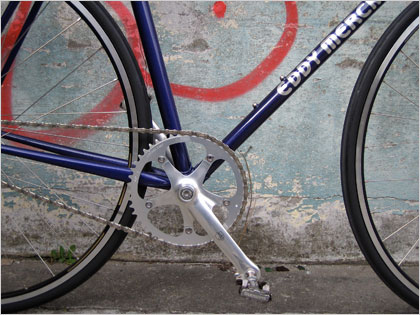 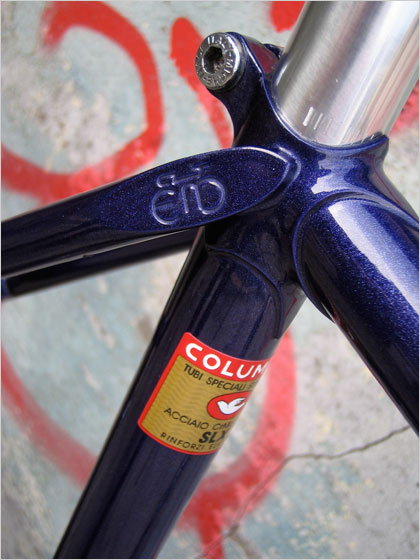 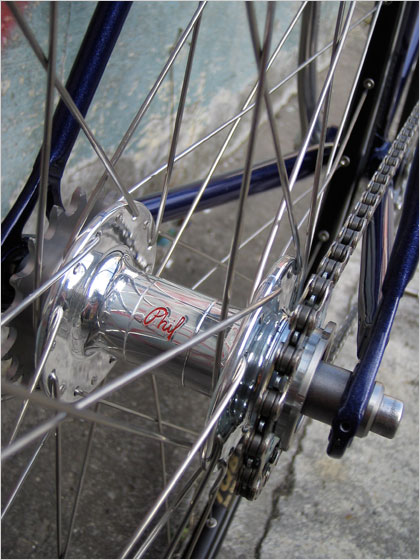 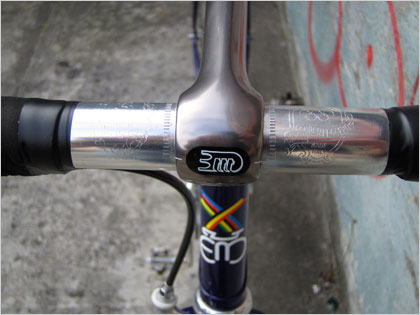 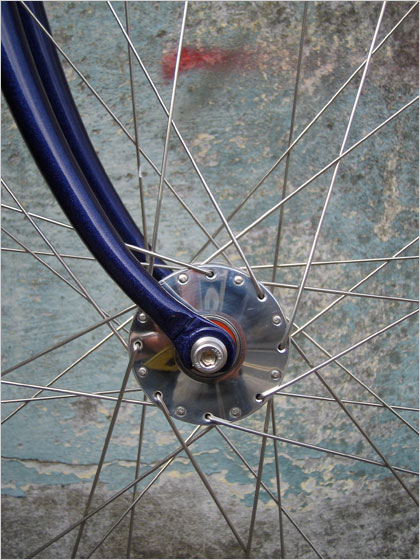 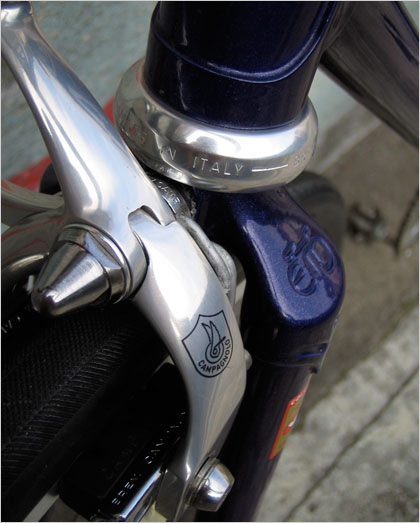 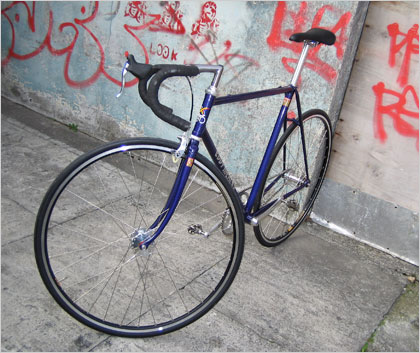