One of the projects I’m engaged in at the moment is putting together a presentation on ‘adventure cycling’ for Truro College.. they have an Adventure Academy there that is tied up with the outdoor-flavoured degree courses. It’s not a paid presentation but we are going to use it to try and raise a bit of extra cash for Shelterbox  so it is an entirely worthwhile project. My audience are going to be primarily first to final year degree students.. not always known for their ability to pay attention so it has to be said I am nervous about it. It is one thing to present to an audience that you know is 100% interested in what you have to say but quite another when the audience is an unknown. I started out worrying over whether or not they’ll be genuinely  interested in seeing photography from the various places I’ve ridden bikes over the years, or want to listen to what I have to say – so putting the presentation together, with a view to filling an hour, is proving a bit of a headache. I want to make it entertaining so there are certain images that I want to include.. but now I am worrying about whether or not I’m going to offend anyone.. take this picture for example.. 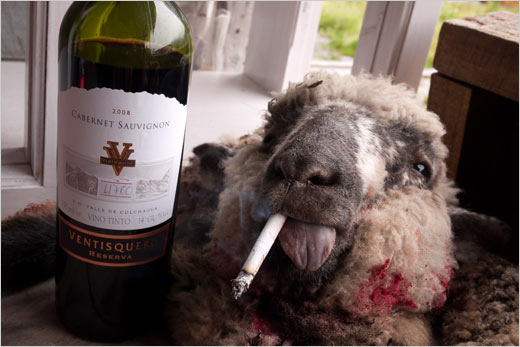 smoking is bad for your health..

I took great pleasure from tucking into a freshly grilled chunk of sheep, accompanied by a glass of red, on a  cold and rainy afternoon in ruined Chaitén but I expect there will be a number of vegetarians/vegans in the audience (and amongst my readers too..) so are they going to angry with me if I show it…? I am going to show it I think, after all butchering and barbecuing sheep is a fairly significant and unavoidable part of life in rural communities all over the world. Choosing to be vegetarian is a luxury that, for example, for folk living on the steppes of Central Asia is simply not realistic. I also like the comedy value of the picture. I think I might include the big cauldrons of stewing sheeps heads in Xinjiang also…. I don’t generally set out to deliberately upset people but at times I confess I have been guilty of some mild provocation (another one of those comfortable human failings I mentioned yesterday)…. I guess the world is just like that. It’s a bit like this blog really, I try to avoid being deliberately provocative or directly insulting as I believe in trying to live harmoniously with the people around me…. but  I also like to write to how I think .. and this past week I’ve been thinking some fairly blunt things as a result of behaviour of some people that I have observed. None of it is directed at anyone in particular  but if you felt offended by some of my words then I do apologise anyway.