I feel as if I am at something of a photographic crossroads… it’s been on the horizon for some time now but my arrival at this point was recently hastened.. well, if the end of 2011 is still recent, by the seemingly unrelated act of upgrading my Mac to OS 10.7 Lion.When I upgraded I found the driver software for my Nikon film scanner would no longer work. Nikon stopped making and supporting their range of film scanners years ago – which is a shame as they were really good, and not inexpensive, bits of kit. The simple fact of being faced with forking out for a third party scanner driver such as Silverfast or Vuescan is making me re-evaluate my whole ethos towards shooting film. 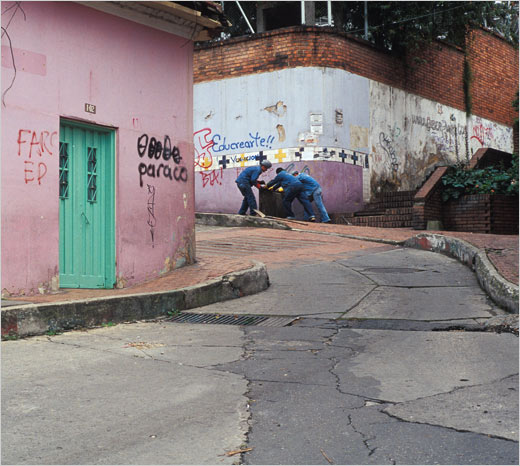 whenever I think about the reasons I like film this is one of the images that springs to mind most often.. the garbage men in Bogotá (cropped here). It's not a particularly remarkable or colourful image, and thus perhaps that is why the subtleties become more apparent. When viewed full size there is an organic quality to it that is hard to define.. it's partly a combination of a subtle graininess combined with the particular rendition of the pastel tones - due both to the film and Leica glass I think. Some folk would say that you can do that digitally.. but I don't think you can, not in the same way.

Lance Armstrong said “It’s not about the bike”.. but I think it is.. a little bit.. especially in my case. It’s the same with me and cameras.. it’s not all about the camera and it’s not all about the film  but it is about a bit of both. With regards to film I like the colour palettes and the more “organic” quality of a film rendering as opposed to a digital rendering, and I like that it is a truly genuine way of recording a moment in that there is no little preview on a screen to tempt me to re-evaluate a shot on the spot. But I wouldn’t shoot film on any old camera.. lets say my camera of choice was a standard film-based SLR like a Nikon F5 or F6. I wouldn’t hesitate to get rid of it and get a digital SLR. I don’t use SLRs however, I don’t enjoy using an SLR in the way I enjoy using a rangefinder. It’s not all about the camera but the right camera inspires me to get out and take pictures.. For years I’ve used Leica rangefinders.. first an M6, and then an M7 which with it’s aperture priority auto-exposure mode missed the point for me so I replaced it with the ultimately basic MP.. and that’s how I’ve been ever since. The MP is a wonderful tool to use so it inspires me to use it. Except I haven’t been of late.. the cost of film and processing means I shoot less and less.. I have a digital camera but it’s not an inspiring tool to use so the bottom line is that when I am at home I just don’t shoot. Much. 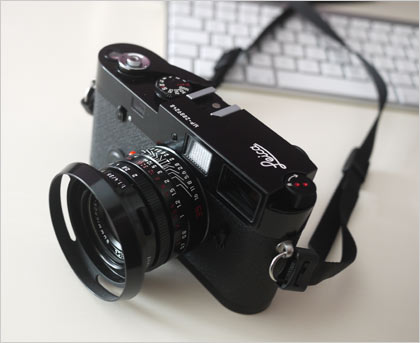 The digital camera is a Panasonic GF1.. it’s handling and form is somewhat similar to a rangefinder and the prime lenses are very good so as an inexpensive tool to take on expeditions, and that I don’t mind breaking,  it’s perfect (I wrote about it here). It is very definitely not an inspiring piece of kit but it doesn’t need to be because when I’m on the road I’m inspired anyway and will shoot no matter what camera I have. It’s a bit like having a beautiful Japanese knife to use in the kitchen at home and a capable but merely functional folding stainless knife to use when camping.. the end result is the same but the process is somehow so much less satisfying.  Prior to the GF1 I had a Zeiss Ikon rangefinder to take on the bike.. a much less expensive thing than the Leica MP but retaining many of the attributes, though not all, that make the M-series cameras such a pleasure to use. 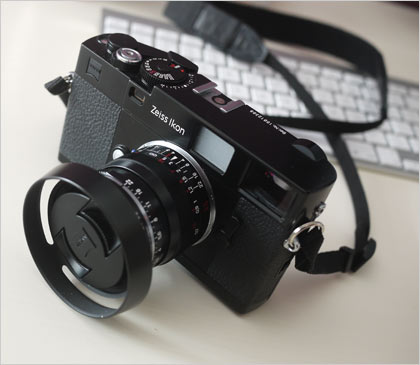 Zeiss Ikon.. quite nice but not in the same league...

So now here I am looking at the cost of third party scanning software.. Silverfast (£400-ish for Silverfast 8) or a mere £50-approx for Vuescan. Each has it’s own pros and cons and relatively speaking Vuescan is a very cheap way of keeping my Nikon scanner in service.. with income low at the moment however I am thinking carefully about the ££ I spend so I could not help but consider alternatives that would get me shooting more at home… i.e with regards to film do I give up, sell up and move on and likely shoot more or stick with it for the time being. The Nikon scanner is worth a fair wedge on the secondhand market at the moment, being a sought-after bit of kit… the Zeiss Ikon would fetch some useful £££ .. and the MP would fetch “quite a lot of £££”.. especially as I have a rare Summicron-M 35mm in matching black paint finish.. the significance of which you would have to be something of a Leica nerd to appreciate. The problem comes in finding something digital to replace it with that is as pleasurable and inspiring to use. The obvious choice is a Leica M9.. but at £5K+ for the body that is out of the question right now and at that price I think I’d be reluctant to stick it in my panniers on rough-stuff bike trips… Next in line would probably have to be the new Fuji X-Pro 1… It gets good reviews but does not appear to be fully sorted in terms of its handling.. and it is a lot of wedge to fork out for something that ultimately could annoy the hell out of me… and somehow it isn’t going to have the soul of the MP.. so I’m stuck. I don’t know what else there is. It’s quite possible I have created my own private camera-flavoured holy grail in my mind that doesn’t exist… the ‘experience’ or the ‘soul’ of an MP, with the image quality of an M9 at an affordable price…. 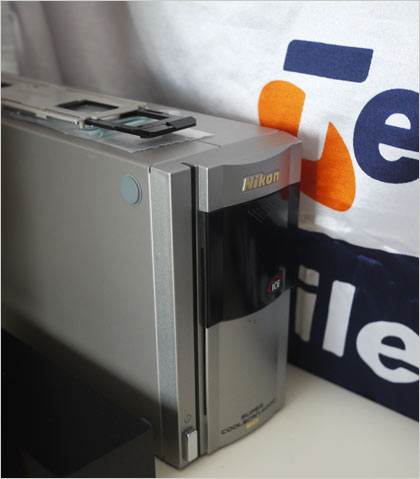 Nikon LS4000.. boring but very useful bit of kit, nearly 10 years old now and near as dammit irreplaceable. By way of an aside the background is a large flag I 'borrowed' from the finish line of the 1995 Sydney-Hobart yacht race.. good party that was :-)

Part of my problem is that the MP is such a lovely thing to use, such a beautiful piece of engineering I think I might regret selling it.. so say I keep it even if I rarely use it.. I would have to keep the Nikon scanner to be able to do anything useful with my processed films (I prefer color slide so I don’t bother with a traditional darkroom).. so all of a sudden the only thing left to sell to fund a digital camera is the Zeiss Ikon… and that probably won’t go far at all towards something else that is going to inspire me to shoot. Back to square one. The Ikon might just stretch to funding a Fuji x100.. the fixed lens predecessor to X-Pro 1.. it has a fast lens at a focal length equivalent to 35mm, my most used length.. an optical finder and has the right look and feel. Fujinon lenses have always been excellent too. It might make a good replacement for the GF1 also if I decide I can live with just one focal length (instead of 2..) on my bike trips…

So after all that thinking out loud I still don’t know what I’m going to do… all I know is that the pressure is building to do something…. stay tuned!