A few days ago I was reminded to write about something that I’ve been meaning to scribble a few words on for ages.  I was sitting in the waiting room at my GP’s surgery, there was a pile of photography magazines in the corner so I picked one up for a flick though. I didn’t like it, it was full of the usual stuff that the mainstream mags churn out.. i.e very rule based about how to take a photograph and what makes a good subject and what doesn’t, plus of course all the usual stuff about having loads of megapixels and how to hack your pictures about in photoshop. Not my scene at all. I subsequently did what I usually do and forgot all about it.  On Tuesday however I had another reminder, one of the “oh look at that” moments that characterise the way I see the world… 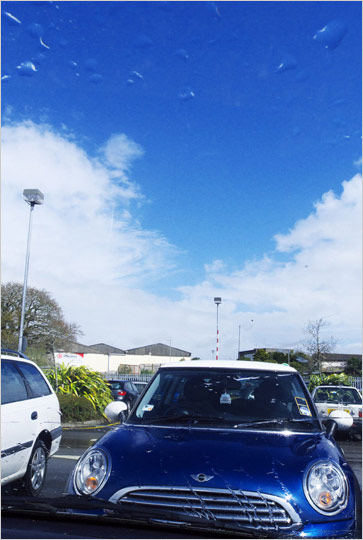 This time however I’m going to make the effort to put down a few thoughts, but before I go any further I’m not intending to be preachy or say my way is best – it isn’t, I just thought it might be of interest if I articulated something about the way I see and respond to the visual elements in the world around me.. especially seeing as I cannot get my brain to focus on work today ;-)

The picture above is what happened on Tuesday. It happens all the time it’s just that I don’t always have a camera. It’s not going to be a particularly interesting picture to everyone and it’s not going in a portfolio or anything, it’s just a snapshot of something that “stopped me”.I was getting into my car just as a heavy rain storm passed. The light was beautifully clear and the combination of blueness, sparkly stuff, water on the windscreen and the particular geometry of the scene stopped me dead. 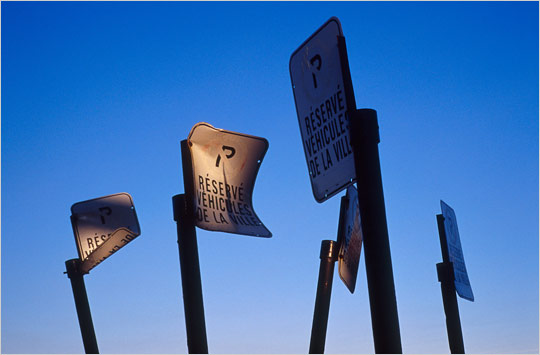 I’m sure it happens to most people that are properly awake.. you’re walking down the street and something catches your eye.. whether a splash of colour, a particular flavour of lighting or the geometric arrangement of things.. whatever it is it is detached from the subject matter itself. It’s that detachment I wanted to mention.. so much photography is subject-based.. i.e a beautiful landscape, a bridge, a flower etc etc… and nothing wrong with that it’s just in my world the subject generally is of much lesser importance. I respond to arrangements of things with respect to each other, colours and light. The camera becomes a secondary factor, it’s just a way of recording the world that I respond to rather than the more conventional school of thought that says you need wide angle lenses, telephoto lenses and a bunch in between to go out and “find” and to “make”photographs.. the key there being “make”.. The photos that result from that way of doing things can be breathtaking, a stunning wide-angle landscape for instance, but they’re not really a true representation of the “world according to me”… :-) 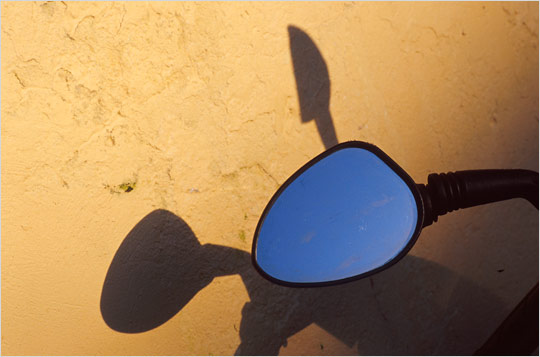 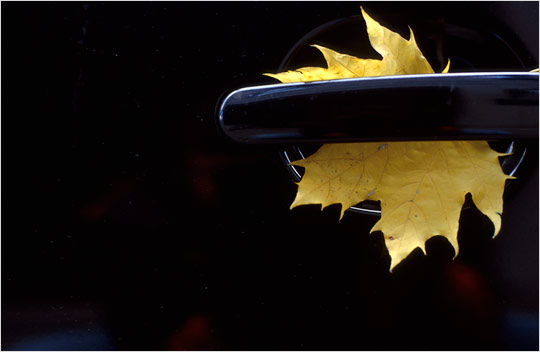 I've been accused of setting this up but I didn't, it was just there as I was walking down the street one morning in Montréal.

So, even without a camera I’m still taking photos.. in the way that I sometimes mind-surf waves I mind-photograph as I’m going about my day, but when I do have a camera with me to capture the things that stop me and make go “oh” the results from what is, on the face of it, a very ordinary world can be quite interesting. The key is to have a camera with you but not be looking for photographs, and the ideal tool to my mind is something as unobtrusive as possible with a fixed focal length lens between 40 and 75mm I think, i.e  a close representation of my own visual field and that doesn’t introduce artificial distortion. 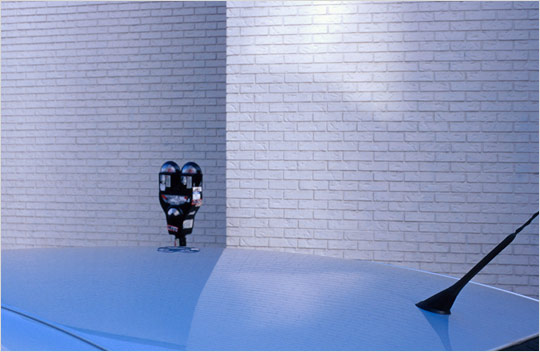 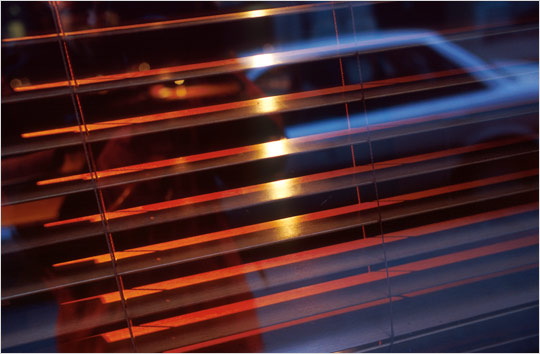 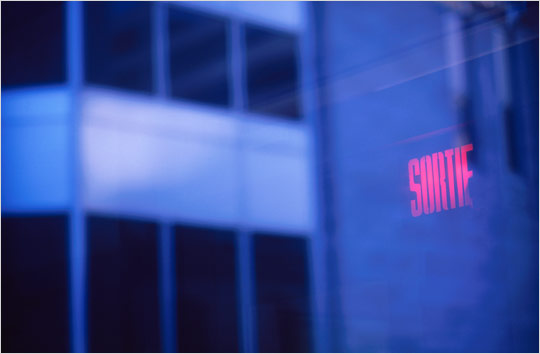 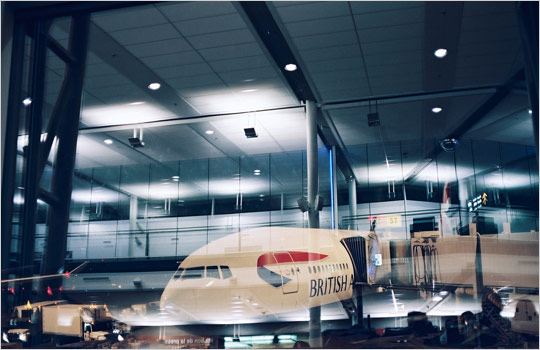 airports are not known as beautiful places.. (thoughts of Douglas Adams and "as pretty as an airport"..)

There’s a book a I came across many years ago which articulated to me perfectly where I was coming from and helped me think a bit more about it. I’d highly recommend it. It’s about as far from a conventional photography book as cheese is from a Blue Whale. It’s about appreciating the nature of the world as it is and being able to express it without the stress of feeling as if one must create something. When I photograph I’m in a sort of meditative state, when I’m not in that frame of mind I don’t even bother to try and take pictures, there’s no point, the results will be “forced”. It’s the same regardless of whether I’m just wandering around on the beach or enjoying some street photography when on the road in some far-flung place. As soon as the state of mind goes it’s not worth continuing. It’s not just photography either, I once spent a weekend once with a group of likeminded folk meditating and  playing about with object arrangment and calligraphy. The calligraphy was most interesting.. nothing to do with what most folk thing of as calligraphy but rather the case of being presented with a large, blank sheet of paper, considering the blank space and then choosing a brush stroke to best complement that blank space. The next stroke would be done by someone else with the similar philosophy of complementing the space and the existing brush stroke. The results were beautiful. It’s something that I’d like to do again with some friends. Anyway, I digress.. the book. It’s called Dharma Art by Chögyam Trungpa and I’d highly recommend it if you’re feeling somewhat “constipated” visually. This is what my edition looks like, dating from 1996, I think there is a newer edition with a slightly different title… I’m sure you’ll figure it out. 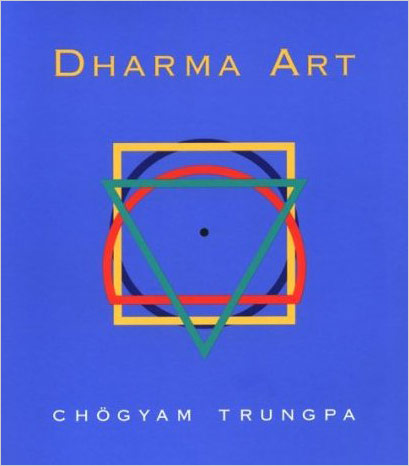 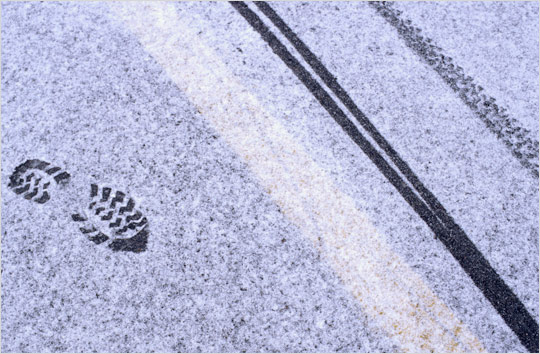 tracks in the snow

All this applies to street photography as well as the abstract stuff, with a little extension. I think the best street photography comes from not trying but rather being able to tune in to what is going on in the world around you and having moments of premonition if you like about something that is about to happen.. becoming aware of the confluence of a number of factors that will combine to produce something remarkable a few seconds into the future. Film is great for that, sometimes when I’ve taken a shot on instinct I’m not even certain what made me take it until after the fact and I can look at the negative.. pictures like that are rare but get more interesting the longer you look at them. 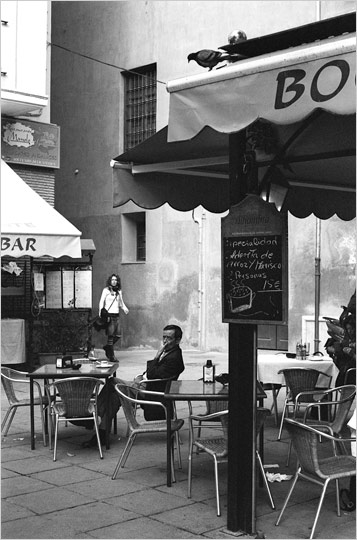 this image is my favourite ever "instinctual moment"..

I’m not  claiming to be even close to a great street photographer but it’s a brilliant feeling when those moments all come together. 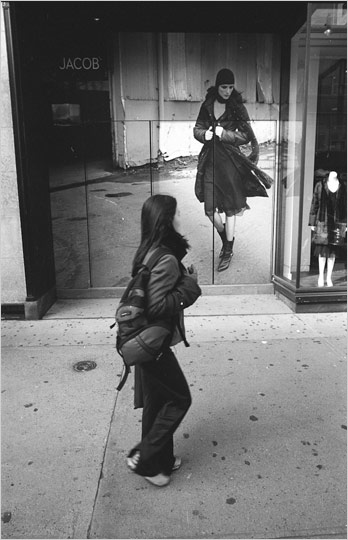 Or something. That’s what I think anyway. So, all that just to recommend a book… blimey! Anyway, loads more street photography (and stuff…) over on my portfolio here. In the meantime I really must try and get on with some work..cheero!

4 thoughts on “in an ordinary world”