Yesterday I gave a talk at Truro College on expedition cycling and riding along the Andes in particular. It went really well and was a very enjoyable thing to do. It was naturally a photo-heavy presentation  but I was a little nervous about it as the audience were a something of an unknown to my mind.. it’s one thing showing photography to a bunch of photographers, or to talk about riding bikes to a bunch of cyclists but quite another to present to an audience of 17-20yr olds whose motivations and interests, and indeed attention span,:-D, are something of a question mark. In the event however it was a big success with many more folk showing up than expected, indeed the theatre was just about full I think, and they were a really nice bunch of people, a pleasure to meet. It all came about because a chap I kayak with is an outdoor instructor at the college, and one of his students, as part of her degree course, had to arrange an “event”. So he put us in touch and I became the event. I think it was a good thing to do as that kind of adventure by bicycle is not something that one hears about so much in the mainstream media. TV at the moment is full of programs about “adventure”.. either reality style TV shows which to be honest, in my opinion, are a bit rubbish and geared towards meaningless “challenges” or the kind of show where a celebrity goes off and has an “adventure” with a film crew, back up and support crew, safety guys and a big budget…. Personally they do nothing for me at all, you just know that at the end of a days filming they all disappear off to either a luxury lodge or at the very least a catered tent camp, and nothing is done without a full safety assessment and so on. It can be interesting viewing but it doesn’t do an awful lot, in my opinion, in inspiring people to just go out and do stuff.. especially by bicycle, where the reality is you don’t need anything but a pair of wheels and some imagination to go off and have an adventure. So, based on the comments and feedback at the end I did manage to inspire a bunch of young folk to want to go ride a bike in interesting places. While I’m on the topic, if you’re in the Newcastle area at the end of May then Pete, the excellent chap I met in Peru riding his bike the length of South America is giving a talk at Newcastle University on 31st May. More details on the other end of this link. Recommended. 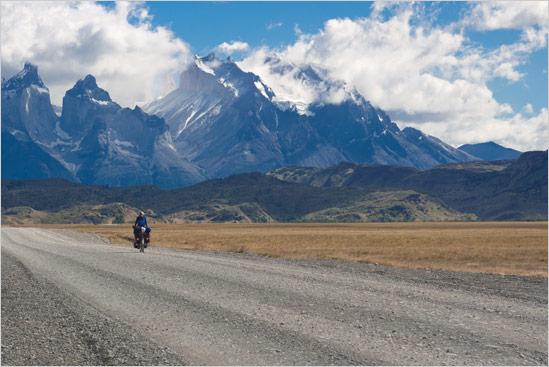 heaven is mountain-shaped with a bicycle flavoured topping.

Despite its success putting the presentation together did me no good at all however. When I’m not on the road  the desire to be on the road somewhere is like a dull ache that never goes away, and then every so often something stirs it all up and becomes something more, perhaps the same kind of feeling you get when separated from a loved one.. although perhaps I’m not particularly well-qualified to comment on that ;-) So just recently the dull ache has become a burning desire.. I think what with trying to get a business going and so on I can only afford to disappear for 3 or 4 weeks this year but whether I have the £££ or not I’m going to have to find the opportunity. I’ve always had a little bit of a problem with mildly depressive tendencies when engaged in what passes for ‘normal life’ and having a regular dose of adventure is the only cure that has ever really worked. Especially now as my plans for the Hebrides this summer had to change. I’m still not on brilliant form, although improving, so given that Chris needs to know he has guides and so on all lined up for his season it wouldn’t have been fair to make a commitment and then have to pull out at the last minute due to not being strong enough. There may still be some waterborne Hebridean antics this summer but going to have to play it by ear. On the bright side today was the first day in almost a month that I’ve been able to physically keep going all day. Hurrah! Definitive results next week but have become pretty sure I picked up a virus somewhere along the way. My state of mind has not been that good at all the last couple of weeks, indicative of just how important riding bikes and paddling kayaks are to my mental health :-) Now, if only one could get such toys on the National Health. ;-) Perhaps in many cases buying someone a bike could even be more cost effective than weight loss surgery or anti-depressants… now there’s a {moderately} controversial topic.

Anyway, enough of my self-indulgent ramblings.

5 thoughts on “mountain shaped with a bicycle flavoured topping”