I’ve lost my mental focus for the day so I thought I’d write a little post that isn’t about bikes or cycling or kayaking, rather I thought perhaps it might be time, for those of my readers that are interested, about how the career change thing is going.. as it’s 2 years to the week since I left Lockheed Martin and the aerospace career behind. The first year (well, year and a third..) doesn’t count.. I just played.. I went back to Patagonia on my bike for the winter, came back in spring 2011.. played for a bit more in the surf and on the sea, then spent the summer sea kayaking in the Hebrides.. although technically I was working up there it didn’t feel like it. I also thought  little bit about what I might do re making a living, but not as much as I thought I might. I’ll have been putting some effort into my own business since Dec 2011. Economically these aren’t the best of times to be starting a business but so far I’m on track for my balance sheet to be in the black (or green.. certainly “not red”) for my first 12 months which is something I’m really pleased about. Only just in the black mind, but it still feels like a success for a first year. I haven’t advertised at all, instead word of mouth is getting around and I’m slowly getting more busier and busier which is ace, especially given that winter is coming. The nicest thing is that it doesn’t feel like work at all, partly because I’m not sure I’ve worked that hard… lets say ‘just hard enough’, and I have the flexibility I wanted to be able to enjoy quiet waves on a Monday morning, go riding or paddling mid-week and so on. Discipline to actually get work done has never been a problem for me, and now that I’m doing it entirely for myself I find I have plenty of energy for it. I’ve also met some terrific people with various collaborative projects bubbling away in the background.. opportunities I would never have dreamed of had I not taken a chance on just doing “something else”. I also owe a debt of gratitude to friends.. not just for support, motivation and endless daytime TV flavoured jokes, but for word of mouth recommendations and some huge favours like my buddy that works as a mechanic for getting my car serviced and through it’s MoT for not very much wedge at all.. he wants a carbon fibre spoon in return..! Luckily I’ve just ordered another roll of carbon for more fins and another Greenland paddle. But I digress… I also have a lot to thank Outset Cornwall for, excellent start-up guidance and motivation. They don’t want carbon fibre spoons.

One of the strangest/hardest things I have found after being entrenched in a career for 16 years is to be unapologetic for my decision to leave all that behind, and swap salary for lifestyle. Success and personal ‘worth’  seems so much to be judged on career and monetary worth.. it took a long time to let go of the senior engineer label but I’m at the point now where I’ve just about let it go except when I find myself catching up with friends or ex-colleagues that are buying bigger houses or bigger cars.. running up bigger debts to be serviced by big salaries and I find myself almost making excuses for the fact that I’m happy now living a simpler life, travelling to meetings on my bike, mixing in some sea kayak guiding, schlepping around in my favourite t-shirt.. (haven’t worn a tie in 2 years :-) with the freedom to do what I want.. especially being able to make the most of the surf when it’s at it’s best, and quietest, rather than having to hope it’ll be good on the weekend. Materially I have everything I need.. a bicycle (or two.. or ..) and my sea kayak, surf kayak and what counts as a tiny mortgage on a groovy little granite cottage somewhere that to the wealthy is untrendy but suits me perfectly as it’s close to the beach, close to some great riding and has storage for kayaks. It’s a funny thing.. probably very western. 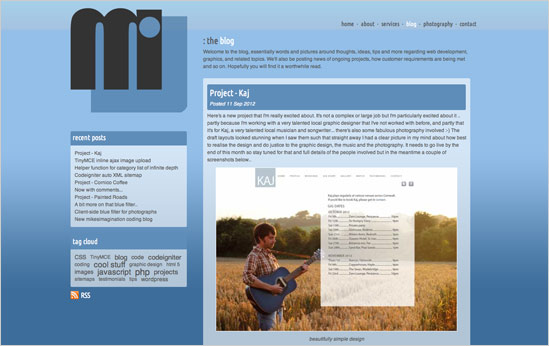 the other mikesimagination blog.. click the image to go there

Anyway, I’m slowly building up content over on my other mikesimagination blog.. a mix of projects, useful code as a resource and so on.. and it’s paying off already judging by traffic statistics. And as the projects come in I’ll have even more to write about. It has been a bit of an emotional rollercoaster the last few months but the future seems brighter and more exciting now than it has done for years :-)

I’ll also have some more to write about Painted Roads very soon, that is just about ready to go live. There have been a couple of changes in the business model, all for the positive I think, but I’ll save that for next time.

That’ll do for now I think.. cheero!