Back at the end of September when I built my latest winter training bike it was done in the true spirit of a proper winter bike.. as cheaply as possible without being crap.. it was one of those builds that relied heavily on decent but worn parts from my bits box and the generosity of friends.. for example those Honjo fenders.. One of the things that needed doing quite urgently at that time was a new rim on the front wheel.. Both wheels, Mavic Open Pro on Goldtec track hubs, dated from summer 2006 and although had been sitting idle for a couple of years had seen a lot of miles, mostly in winter conditions.. the rear rim of course with no brake on it was still as new but the front sidewall had worn so concave I was waiting for the rim to burst every time I hit a significant bump.. pushing my luck.. and due to being busy I’ve been pushing my luck quite a bit. I’ve only just got around to rebuilding the wheel after putting a further 3000km on it on top of the roughly 18,000 wet and gritty km it had already accumulated. I definitely got my money’s worth there :-)  It is the perfect, therapeutic job for a damp winter afternoon by the fire with  pint mug of tea at hand.  Continuing in the spirit of a proper winter trainer the rim is not new.. it’s another Open Pro.. a “slightly used but still with many thousands of miles left in it” rim I spotted collecting cobwebs in the corner of a friend’s garage. Perfect. The only thing I had to fork out for was new spokes (and nipples..).. It was tempting to use the old spokes but I’ve had a couple of breakages in that wheel recently so prudence dictated otherwise. 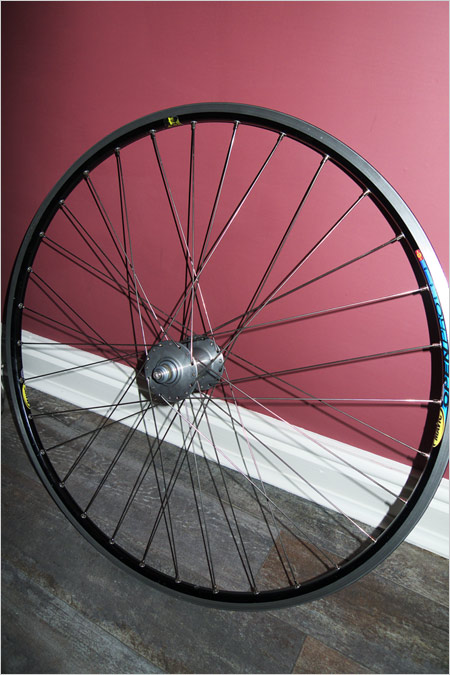 a spot of therapy..

Speaking of money’s worth.. I just swapped out the rear tyre, a Conti Gatorskin.. my favourite skinny winter rubber.. squeezed more than 7000km out of that which is phenomenal for only about 250 grams worth of rubber. The cost of new ones does make me wonder however at the current price of roadie stuff. How is that the rrp can be only a bit less than that which I paid for my Marathon XRs with more than 4x the volume of materials and more than double the useful life..

By the way.. the Goldtec track hubs are ace, very tough, not as spangly as a set of Phils but probably better for winter use as a result.. especially if you’re  a tart about shiny things like I am, and they’re British made which is a rare thing indeed these days.