Around about now, late winter, there always happens a day that feels special. A day that reminds one that spring really is close and that lifts the spirits of everyone after a seemingly endless winter.. Back when I was living in Montreal there would be a day when the temperature ‘soared’ to around zero degrees C, the sun would be out and the winds would be light.. and folk would be out and about in shorts and t-shirts. Here in Cornwall it’s typically a day like today.. today was the day when the back of winter was broken.. the sun was out, the winds were light, the surf was beautifully clean and mellow, and everyone was in a  good mood.. well, more than a good mood.. behaving like children more like.. with just a the odd exception in the form of a grumpy longboarder ;-)

I’d been feeling quite depressed the last couple of weeks.. mostly just working.. and when I was out on the water or on my bike it seemed to be permanently grey, damp and with a gale of wind… hence the lack of words.. So a great morning out on my bike yesterday with a riding buddy, with a stop at the obligatory beachside cafe, followed by a beautifully sunny morning in the waves today and my head is back in a good place :-)

I don’t have any pics of my own as I was out on the water but we did have a photographer on the beach in the form of James’s dad so here’s a couple of snaps, with permission.. the waves weren’t big but were beautifully clean with just enough oomph, and it’s always particularly mellow fun when there’s no risk of having your arse handed to you on a wave-shaped plate ;-) 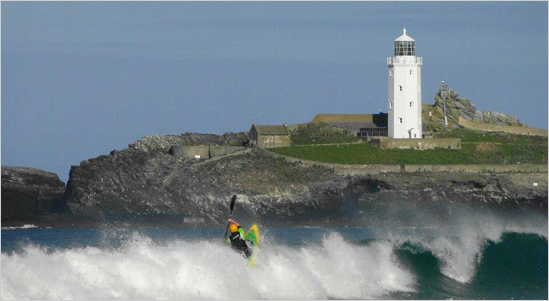 This is James ripping it up in the shadow of Godrevy light.. he’s a better surf kayaker than I will ever be but then he did represent the UK at the last world champs… and being young has that extra bit of bendability .. ;-) 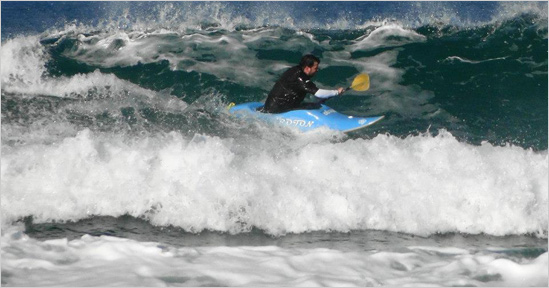 and here’s Ewen tucked in nicely..

In other news I feel as if I am being drawn back to the world of competitive cycling.. it’s like an itch that won’t go away. I’m not sure if it’s a good idea, I was never able to just treat it as a bit of fun.. if I was going to race it was always full on and I’m not sure I want that commitment.. and it does get awfully expensive… but the itch won’t go away so I guess we’ll just have to wait and see what happens I guess :-|