Here’s a good excuse for a ramble. …. I confess I do get excited by spangly bicycle flavoured things, but equally get excited by rather boring things too. With a pile of bits and that Surly Cross Check frame still sitting in the workshop I figured it was probably about time I got my arse in gear and did some bicycle-building before I hit the road next month. Really my well-worn Nomad would have been more than fine for the upcoming trip but sometimes it’s just necessary to build a new bike with no justification other than it is, errm, necessary. Anyway, touring bikes.. I very much lean towards the simple and strong school of thought, hence the wheels I put together this morning.. rather dull 36h shibongo LX hubs on equally dull Rigida Sputnik rims.. The rims are ace, I have the 26″ versions on my Nomad and they’ve proven themselves to near as dammit as bombproof as a rim can be… rather better than the Mavic 618 rims I was using before. Mavic rims always crack eventually when used for loaded touring. I’ve cracked a set after less than 10,000km use, without a particularly heavy load, which is a bit rubbish.. and I’ve seen numerous other Mavic rims badly split.. they start to crack between the spoke holes on the inside of the rim under the rim tape.. you’ll know about it when your brakes start grabbing, but when you spin the wheel and look at it the rim will look perfectly true.. rather the grab is caused by a subtle outwards bulge of the rim sidewalls as the crack spreads around the circumference of the rim. Anyway, I digress…  Sputniks are dirt cheap too, you should be able to find them for around £18-£20 each. 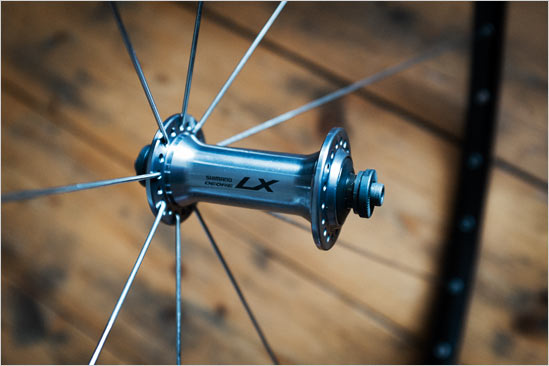 low spoke count, radially laced front wheels are all the rage on lightweight road machines, but really I think I ought to add a few more spokes to this one…

I have sleepless nights.. well, almost, when it comes to deciding what hubs to use on a  set of touring wheels. I don’t like cartridge bearings for touring, old fashioned cup and cone bearings are much more useful as even the most basic bike shop, or even machine shop, will probably have some balls of the right size… either new or swiped from an old hub…so if the cones and races are still good it’s easy to get rolling again. Spending loads doesn’t guarantee you trouble free riding either.. I’ve seen Chris King and even *Royce hubs fail catastrophically after not very many miles at all.. so I won’t buy those. If Shimano still made the 12 year old XT M752 hubs that are on my Nomad I’d buy those.. They’re a brilliant hub with a terrific reputation for reliability, mine have  tens of thousands of mixed terrain expedition use on them and spin as nicely as the day they were new. I’ve serviced them a couple of times and there were no signs of degradation inside.. and they didn’t really need servicing, so very much fit and forget. Current/newer XT hubs don’t have a very good reputation for reliability and I’ve met a number of folk on the road with them that were having trouble .. For whatever reason they’re just not that great. The current LX hub however apparently is very similar internally to those old XT hubs and does have a good reputation.. so I bought those. They’re very cheap too, I paid about £35 for the pair…. I think.. I’m not entirely sure what I paid as I have a very good relationship with my local bikeshop, hehe..   I tend to just sort of accumulate piles of odd bits and pieces from parts bins upstairs and it all gets lumped in together. But they are cheap anyway.

Having said that I would buy a set of Phil Wood touring hubs. If I had the spare wedge…   Phil hubs are ace in my entirely biased, unscientific opinion. I have some Phils on my DeSalvo and they’re just brilliant. Not to mention shiny. Phil customer service is ace too. I know that from first hand experience. 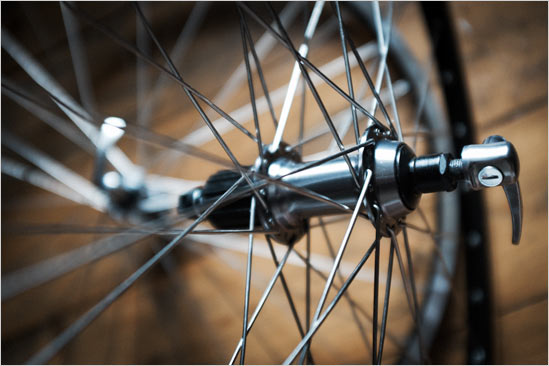 Speaking of digging around in bikeshops, I was very excited to find workshop-sized rolls of Velox rim tape in lengths sufficient to fit a lot of wheels :-) Yeh, sad I know… but I like Velox. It’s nice and old-fashioned and bloody tough. – it won’t ever spit or degrade, and it’s another one of those ‘dirty little secrets’ that all the folk who only know modern mass-produced bikes know nothing about :-) 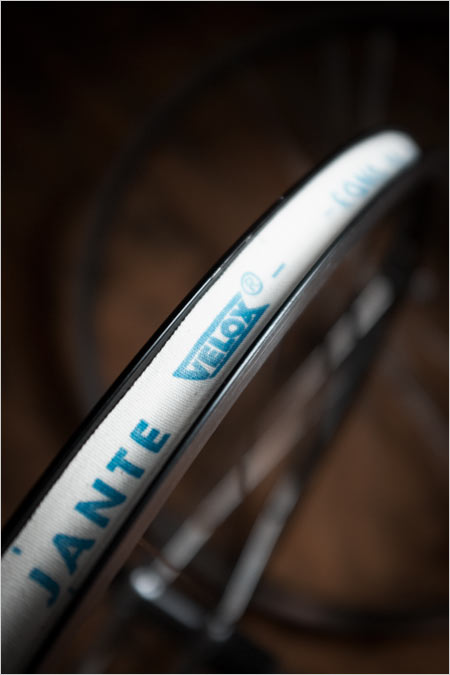 My resulting wheels are quite heavy I’ll admit.. I might have overdone it really, but I know they’ll take an absolute beasting.. and anyway for use at home I’m gonna build a lighter set of wheels on a double-sided fixed/free hub for mucking about up on the moors.. fixed because I do have a somewhat perverted interest in fixed gear off-road riding, and free on the other side for when it all goes horribly wrong :-)

*To be fair to Royce in this event their customer service/warranty support with regard to an overseas hub failure was first class. Chris King on the other hand were a rather different story..