Back around Christmas time I ordered a new surf boat from Malcolm at Mega Kayaks. Same hull design as my then current boat – a Boost – but rather than the single-skin carbon kevlar construction of that boat I wanted Malcolm’s top end carbon/foam sandwich vacuum-bagged construction. Not so much for the very light  weight – although it is significantly lighter – but rather for it’s stiffness. My old boat was stiff and very tough but I could feel it flexing a bit at high speed on decent waves which of course is going to take the edge off the handling.. well, that’s my excuse although I suspect a significant motivator here was that I just fancied a shiny new boat… in fact I think that probably was the primary motivator.. all those other things like faster and sharper handling being secondary benefits ;-)  It was finished last week so I collected it on Friday and took it for a spin this morning. The waves were not big, just 3 or 4ft but a very ‘old’ swell with a long period of around 19s so enough power for a small wave.. and very clean, albeit with  long wait between sets. Ideal conditions for getting the feel of a new boat while sorting out the outfitting. Despite being the same hull shape it does feel different.. just ‘sharper’ on a wave.. and a bit quicker.. so I’m very happy. Malcom’s latest boat, the  Phantom has become hugely popular in the surf kayak community and is an outstanding boat.. but it is larger than the Boost so although tempted I figured best stick with a design that fits my lean, light frame well rather than try and make a larger volume boat work. The Boost is not an old design by any means, it’s been around 4 or 5 years or so I think and together with its bigger brother the Proton is still a very high performing kayak and perhaps could be considered as something of a modern classic.. along with his other HP designs such as Bullitt S and XS… So I’m happy and should be happy for at least a couple of years more ;-) Looking forward to getting it out in some solid waves now. My old Boost has gone to a surf kayaking friend.. she near bit my hand off to get it and seems happy with it so all good :-) 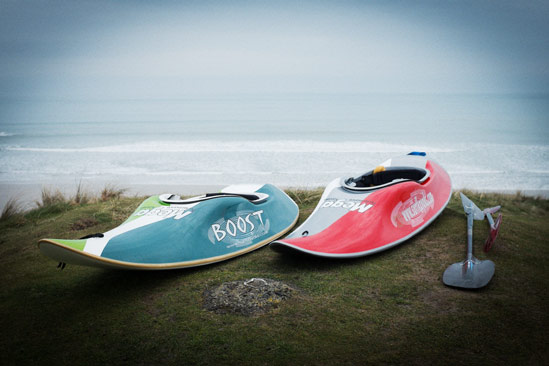 new Boost in red.. and my old one in green .

You’ve seen this pic on here before of J in his Phantom.. but no harm in a bit gratuitous picture posting.. it’s a great pic after all and I have a chronic shortage of relevant pics as never on the beach with a camera when the waves are good  :-). Pic @ J Gossan

what else.. oh yes, came off my bike yesterday for the first in time a very long time.. and in an appropriately amusing manner :-)  There is also a moral to this story to do with replacing knackered cycling kit rather than trying to eke out every last bit of usefulness. So.. my overshoes, like an awful lot of my winter  riding clobber, are utterly shagged… worn out, and despite the rain I very nearly didn’t put them on because I was thinking I should throw them away… There is a tear in the front of one. I was hopping off a kerb in Hayle having stopped at the bike shop, the tear was on the foot in front if that make sense.. and the tear snagged in the end of the front mudguard – which is a polished alloy Honjo.. so the mudguard bent up inside itself.. which locked the front wheel… which sent me slowly over the handlebars into the back of a Honda Jazz parked next to me, pensioners contained within (I think these cars are only bought by pensioners.. although now I have said that no doubt someone will be along to inform me otherwise..), I slithered gently down the back of the car into an untidy heap on the road – feet still clipped in to my pedals and all tangled up in my bike. The pensioner dude clearly heard me hit his car so got out and picked me up off the road. Was very nice about it because I did leave a tiny little scratch…. All very funny I thought. A bit less funny was that the very minor impact broke my saddle.. it’s a Velo Orange model 6 – leather, very much like a Brooks Swallow.. all the rivets holding the tensioning mechanism to the leather at the front sheared off and the tension bolt itself, 8mm steel, snapped too… It all fell to bits with a clonk as I set off to ride home so the journey was completed with the leather saddle flopping around like a pre-rigor-mortis dead fish on top of the seatpost. Still funny really. All the hardware must have been very soft, poor quality steel to fail so easily – hell the leather isn’t even scuffed. So.. won’t be buying another one of those. Bit rubbish really. The bike (my winter trainer) now has an ancient San Marco Regal on it that, quite literally, has been to the ends of the earth and back on my touring bike yet refuses to die :-)

2 thoughts on “a new Boost.. amongst other things”