I’m really not on board with the way the bike industry is constantly inventing new standards for things under the pretence that the new standard is “better” than what came before.. much of it is a simple exercise in trying to convince the customer that the stuff they bought last year is now obsolete and they must change… because you know.. the new stuff somehow manages to be “10% lighter, and 20% stiffer yet more vertically compliant than ever..”. That old chestnut that has been wheeled out by the marketeers every new product year since pretty much forever. If it were true the modern bicycle would be somewhat unicorn-like in its magical qualities and probably come with a complimentary bag of fairies. I get that sometimes light weight is more important than durability, I get that sometimes it’s OK to have to replace bearings every couple of thousand km. But not if you’re me. I also wish folk would question what “better” really means in the context of what they’re going to do with the bike instead of just becoming all weak at the knees and wet at the thought of whatever is the latest brainchild of an industry whose primary motivation these days seems to be to separate the individual from as many ££ as possible as frequently as possible. Which is why I really, really like this rather lovely frame I’ve had kicking around for a while. It supports some old-fashioned standards that mean I can fit parts that I know will survive many thousands of km abuse, and that can be serviced in distant places. 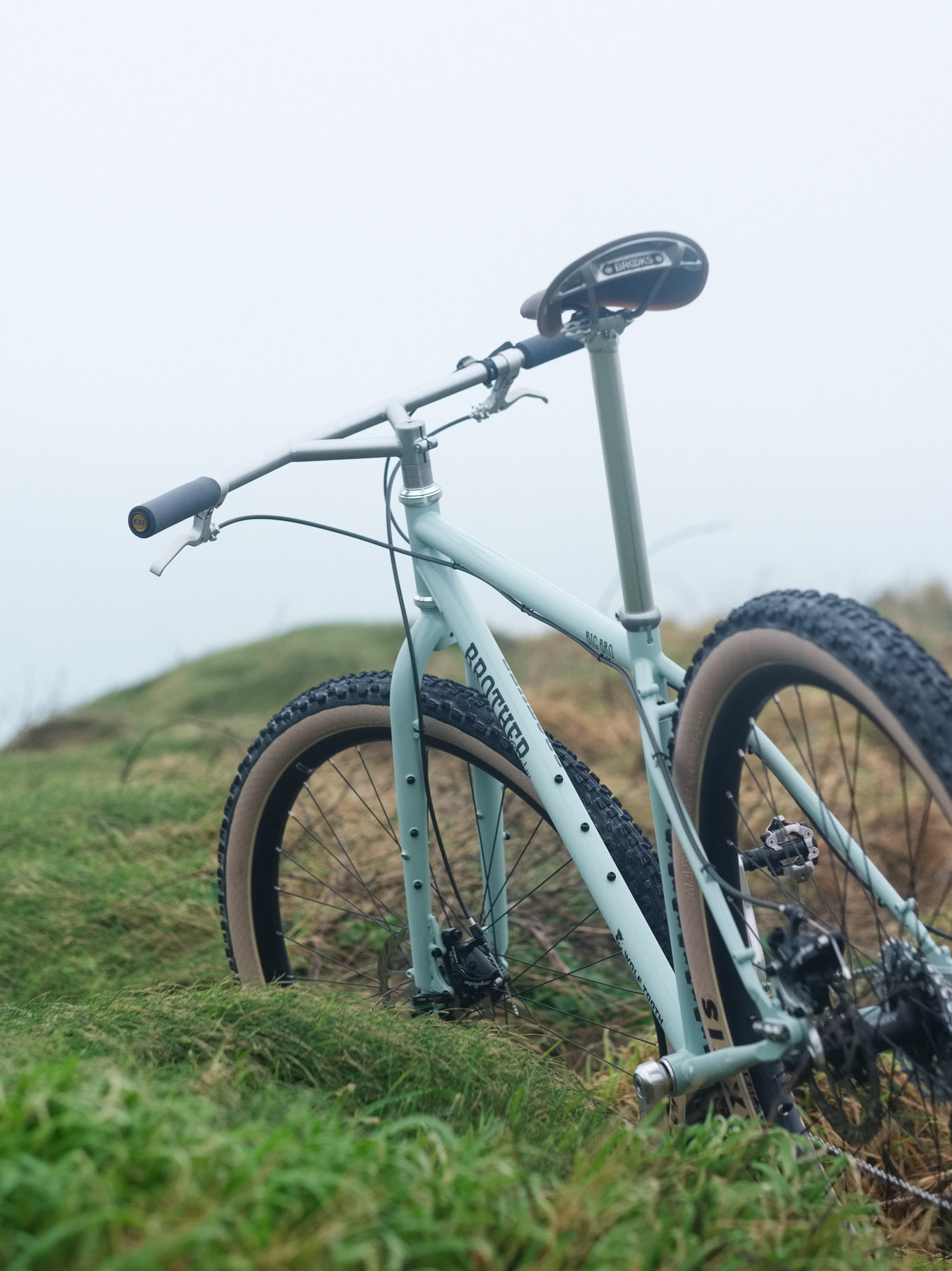 It took me a few months to put it all together…  A mix of old and new parts with my favourite being the rather lovely Nitto nickel-plated cro-mo bullhorn bar.

I know.. another bike.. yeh, whatever… I wanted something a little more nimble than my ECR for adventures with more of a single-track flavour than long-distance dirt road chugging. The ECR is great, it’s like a comfy, long-distance tractor but its touring-oriented geometry  does fall down (literally sometimes..) in twisty stuff. The Big Bro on the other hand is a super trail bike for someone like me that just wants simple and fun. Oh and it has sliding dropouts so I can run it as a single speed.. or fixed if really looking to look a bit silly on the trails round here.. Admittedly there is very little difference between this and a Surly Ogre, except that, in my opinion, this is rather prettier, doesn’t have redundant v-brake bosses to mess with the lines… and with the ££ being what it is.. this is considerably cheaper.

I bought it mainly not because I had an immediate and pressing need, though of course I convinced myself I did, but rather because it’s getting harder and harder to find such frames as manufacturers are forced to keep up with a bandwagon-jumping market and I felt that if I was going to build one I might as well get the frame while I still could… and there was the question of some ££ off the retail price. Always handy. I also just like fiddling with bikes. 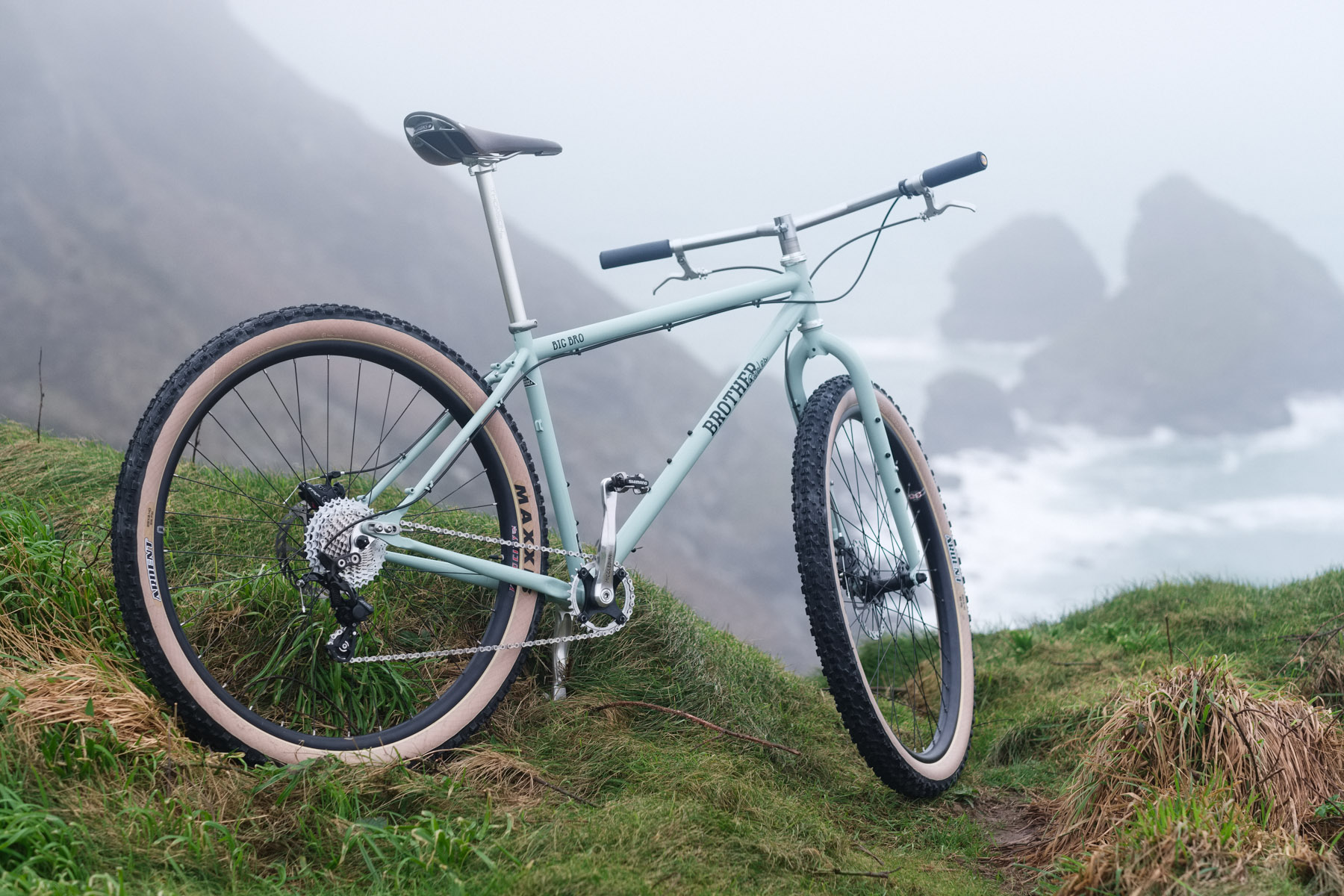 I thought I’d best get a few pictures before I start building a nice patina of scrapes, scuffs, and grained in dirt so took it out on the cliffs above Bassett Cove in the Cornish perma-drizzle. It’s got a 1 x 10 drivetrain  – 30T x 36T in this pic which is all that’s necessary for local trails, but it’s setup to take a 42T cassette. Despite all the steel and zero concessions to light weight it’s really not heavy at all and has a lovely, nimble ride.

From Brother Cycles  – I swear there is no relationship going on here… I just like the frames and the geo suits me – it’s got braze-ons for pretty much everything and can take a 29″ x 2.5″ tyre which is great for both running knobbies or a long distance tyre like the 29″ x 2.5″ Surly Extraterrestrial. It doesn’t have clearance to go to a 27.5″ x 3″ setup, which the Ogre does, and I’ve seen that touted around as a negative but I decided I really don’t care for the stuff I’m going to use it for. I’ve become aware over the last few years that 29″ tyres are becoming more widespread around the world, lots of the rental bikes I saw in towns in Peru last year were 29″, whereas 27.5″ really isn’t. Yet.

Anyway, I best get on and take it off on an adventure. I’ll probably still take my ECR back to Peru in June, it’s ace for that sort of stuff, but I’m not sure… and June is a long way off with lots of opportunities for two-wheeled fun in the interim. 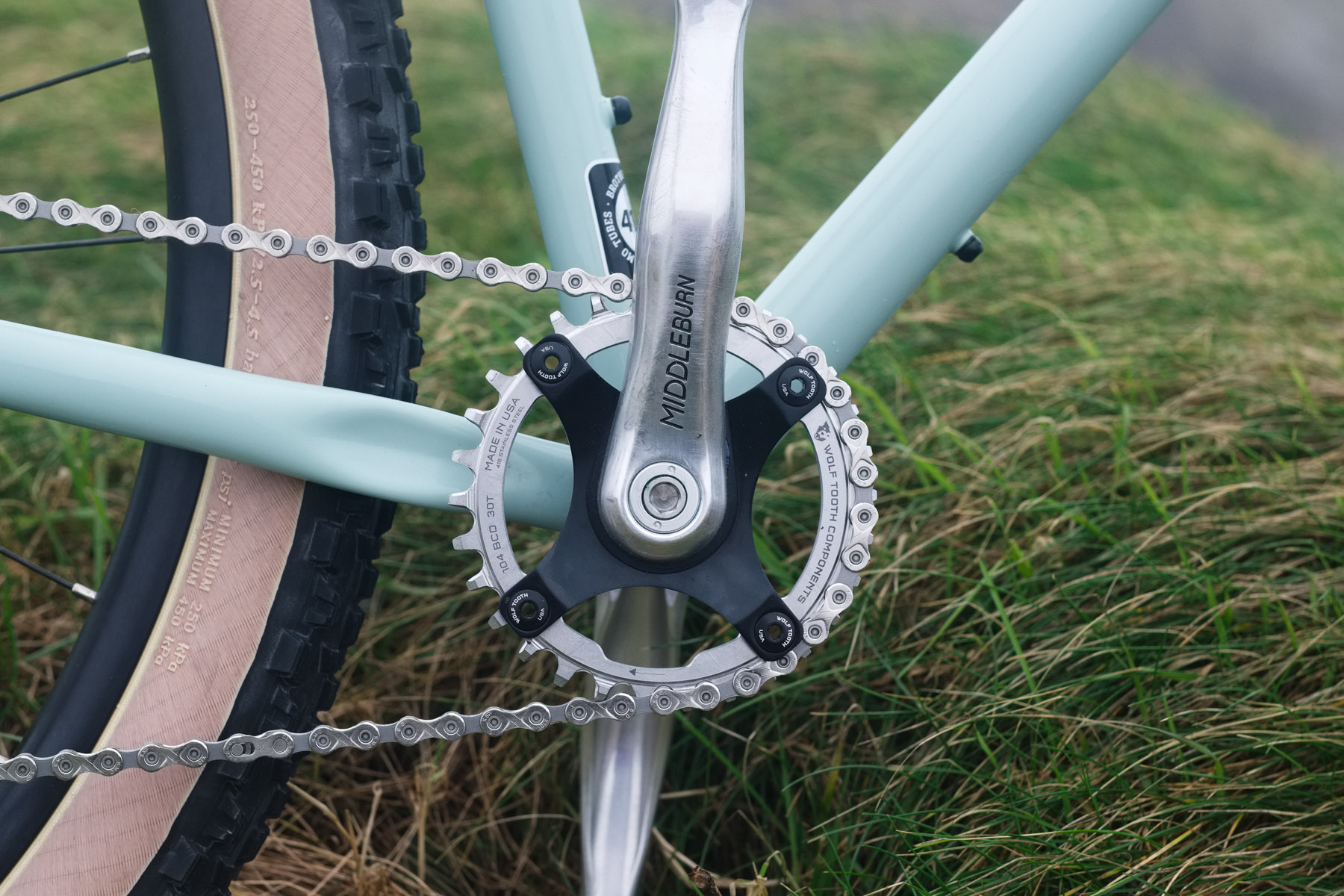 My old square-taper Middleburn RS-7s with a new single spider and Wolftooth Components stainless ring. The wheels are the Velocity Blunt 35 rims I built onto old-style XT cup and cone hubs last year for my ECR. I’ve put tens of thousands of rough km on a similar hubs with nothing more than the occasional re-grease of the bearings. I know not everyone likes the faff of adjusting such bearings.. but if you can be bothered they’ll always outlast the cheap cartridges that are the current norm. The hubs also have steel axles and a steel freehub which is reassuring for remote adventures. I’ve seen many broken axles and buggered freehubs from high end hubs like Hope built with weight as a priority rather than toughness. 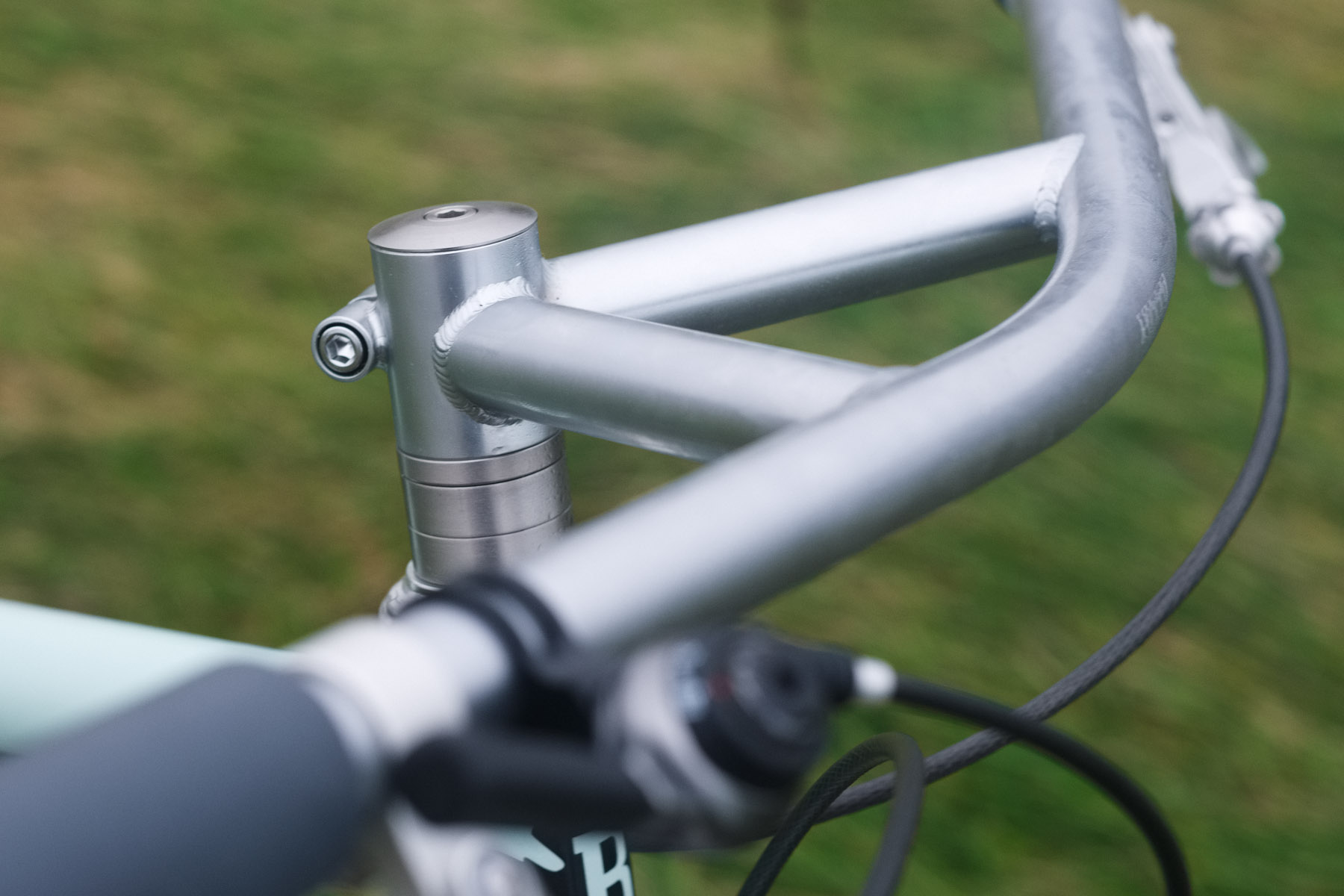 Yum. They’re not light but oh so nice, and a somewhat nostalgic nod to my early mountain biking days in the ’80s. The thin wall thickness of the steerer clamp means the usual alloy spaces won’t do – too thick-walled so the spacers are chopped from thin-walled titanium tube. 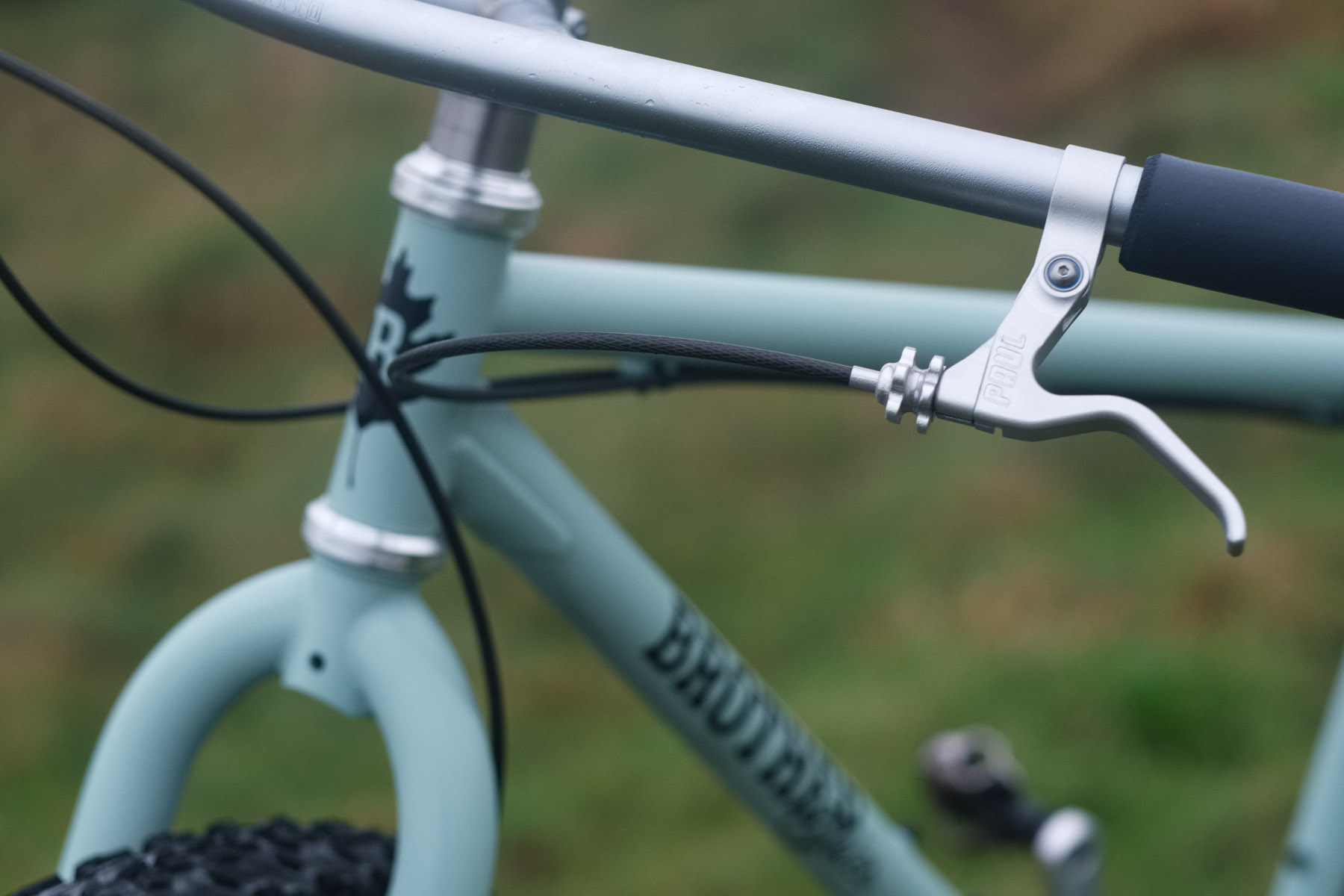 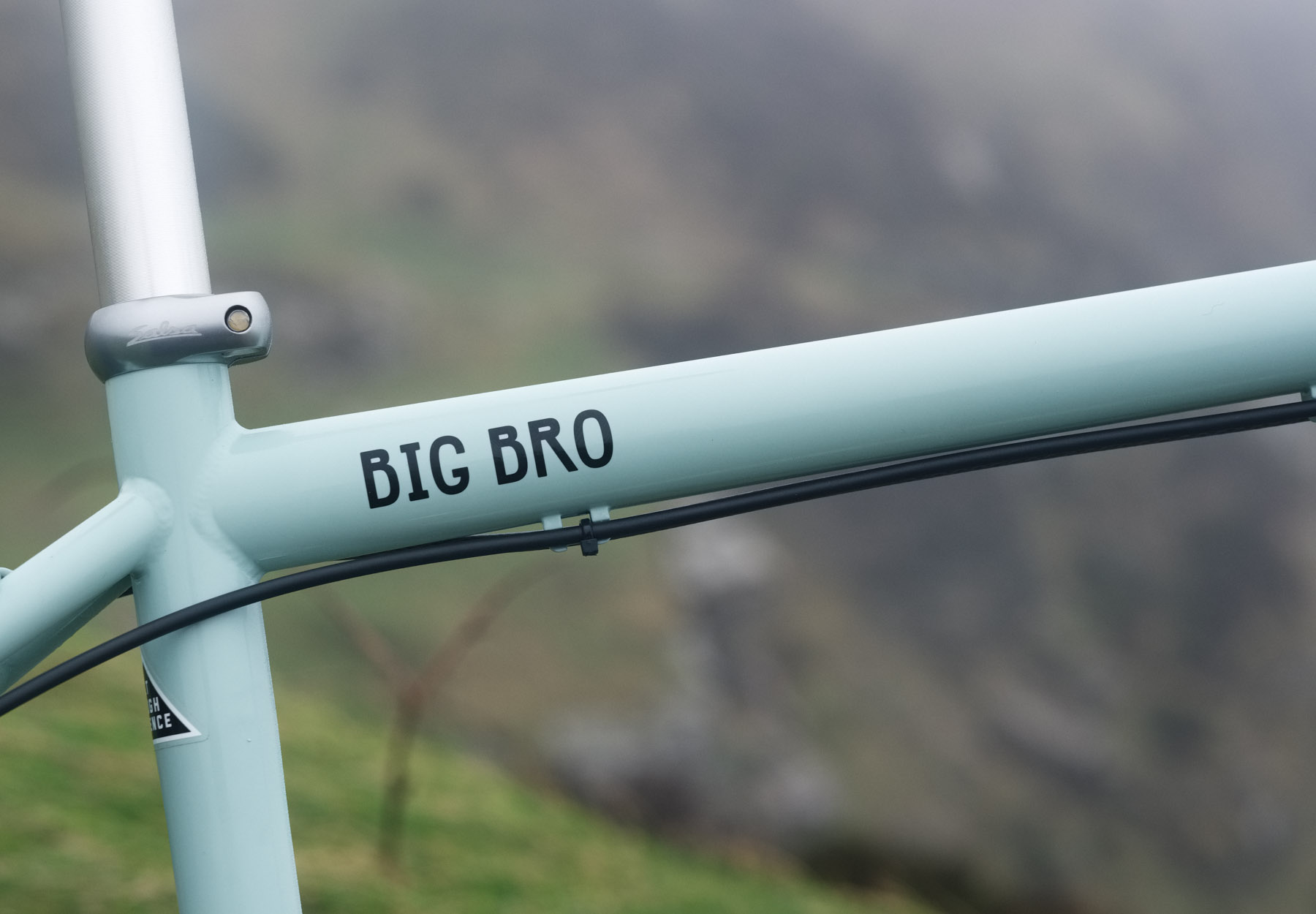