Skip to content
My 2009 Salsa Casseroll light tourer. Now updated, 11 years on, with a fresh perspective and new pictures.

The original post from 2009 is further below however I thought it might be worth updating 11 years on as this bike is very much still a well-loved part of the family. Pictures follow; not much has changed… some Gilles Berthoud stainless mudguards suit it and work very well, and the original chainset was dropped a few years ago in favour of a Middleburn R01. Also added a few years ago were some ‘drillium’ TRP brake levers. The TRP levers work very well, I have the same shape (but not drilled) on other bikes and they really do provide improved leverage, particularly when on the hoods. Together with the 1985 (I think) vintage calipers there is more than adequate stopping power when loaded for a tour. I do have some original (new in box) 600 non-aero levers from the same year as the calipers, complete with gum hoods and original cables, but I’ve not fitted them as the modern levers make for a more practical bike; besides  it’s not a ‘vintage’ bike.

I took it on a couple of long road tours and, as I’ve shifted more towards dirt touring, now use it for weekends, long day tours, and just riding around. The frame really is lovely, despite being a touring frame it has the light, responsive quality of the very best steel road frames. It’s a pleasure to take it for a spin and as such I can’t see myself ever moving it on. The older componentry – hubs, mechs etc – as expected have been super hard-wearing. The only difficulty was finding a new freehub body for the rear 600 hub.. it’s too old; however with a little shimming a newer model of 600 freehub went on just fine and has been doing duty ever since.

I finished ‘baking’ this Casseroll over a week ago having managed to lay my hands on the final few ingredients in the form of a Dura-ace front mech and completing the bar tape decision process.. It’s taken a few weeks* to put together but the result is a decent build that would keep me happy. It has turned out to be a perfect blend of retro flavour in a thoroughly modern bike.

The photos aren’t great, I only had my cheapy little compact with me last weekend but they’ll do for now…  I won’t ramble on at length about it… much anyway, it’s only a bike after all but there a few little things I’m rather pleased with aside from the frame itself which is beautiful. The Dura Ace drivetrain (shifters, derailleurs, cassette) , chainset aside, cost me the grand total of £95 and is barely used … which I thought is really rather cool.. about half the price of a new pair of cheap Tiagra shifters alone… It all works beautifully as you’d expect and the downtube shifters are fun, it’ a tourer so they’re perfect – simple, tough, cheap and they work so so nicely. Other nice things.. the Nitto Randonneur bars are a pair I have had kicking around for a while just waiting for a build like this, the Velo Orange stem matches them nicely. The saddle is a Brooks Swift Titanium courtesy of a good friend and that thing hanging from it is a Velo Orange Baguette bag.. the stainless bottle cages are Velo Orange too. The old school Ambrosio box section rims suit the ‘fat’ 28c gatorskin tyres very well. It rides beautifully, looking forward to cruising through Eastern Europe on this in a couple of weeks time… 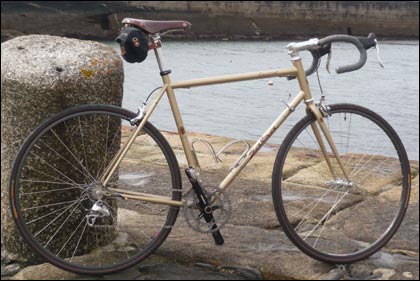 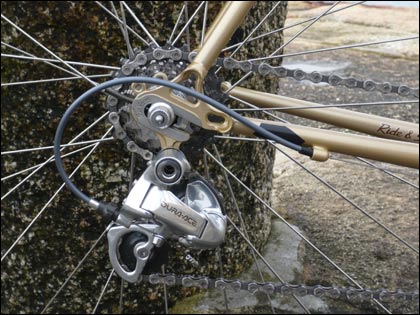 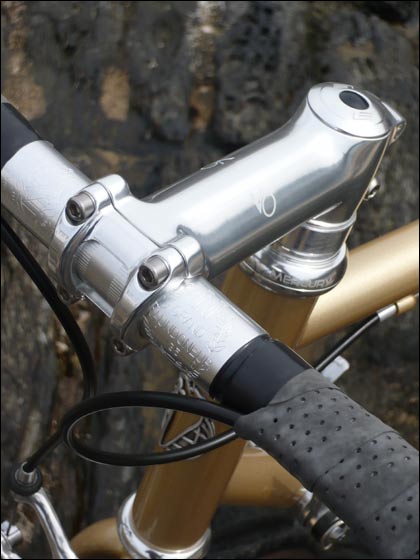 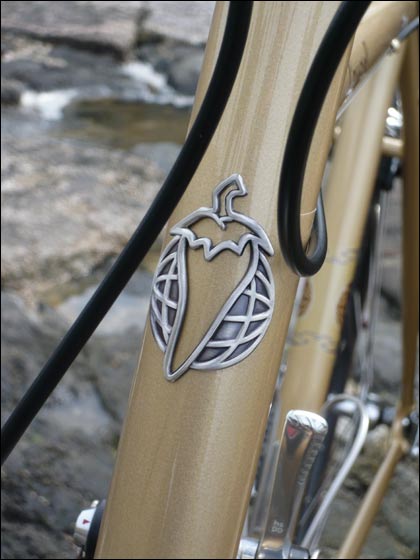 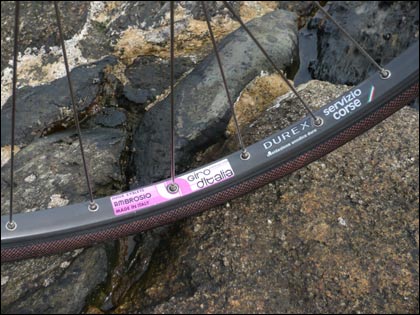