** A quick update on this post, a couple of years on, while I remember. I’ve since ‘cold-set’ the Vega rack such it fits over a 3″ Knard on Rabbit Holes without any adapters/risers and with about 1/4″ clearance each side. I cut a block of scrap wood to just a bit wider than the gap between stays at the tyre position. Wedge the wood in place. Bung a quick release through the mounting holes at the end of the stays to stop them spreading there, then with a mallet tab the block of wood down to bend the stays just enough at the top to clear the tyre. be careful, don’t want to stress or fracture the weld. Worked beautifully and my rack is long past any warranty concerns. **

There is a liberal scattering of posts and articles around the internet with regard to fitting a rack to a Surly ECR, especially with regard to my favourite rack.. a Tubus Vega (you can tell already this is going to be a dry post can’t you.. non-cyclists can probably switch off now although it might be worth persevering..). The bottom line is the Vega sort of fits but doesn’t really, at least not on an ECR in standard trim with Rabbit Hole rims and 3″ Knards… the tyre is too wide. Apparently it can be made to fit over Knards on narrower rims but I don’t really want to build myself some new wheels.. not just yet anyway.. The 29er version of the Vega won’t fit over Rabbit Holes + Knards either.. it’s still not tall enough. However.. the Vega 29er with additional stainless extensions from Tubus will fit. Sort of.. the clearance with the tyre is pretty tight. The problem, well not really a problem, is that the stays are then a bit too short to reach the seatstay bosses without the top of the rack being inclined downwards a few degrees. It doesn’t cause any issues, just looks a bit odd.. if you care about such things. I don’t normally use a rack with the ECR but where I’m going next week I need to be able to carry a bit more than recent journeys .. food for a few days, my multifuel stove so I can cook with petrol/gasoline.. and some properly warm clobber because in late September/October nights above 4000m I can expect to be pretty bloody cold.. also carrying a couple of extra lenses for my camera. So with that in mind I’m taking a couple of small Ortlieb panniers (‘fronts’ technically) on the back. You might ask why not just get a different rack that fits better… the answer really is I’m tight fisted which makes £60 for a Vega as opposed to a couple of hundred quid for various alternatives rather attractive.. it is also a very light and simple rack (I’m simple so I like simple things..).. and it’s not like it’s a permanent fitment. 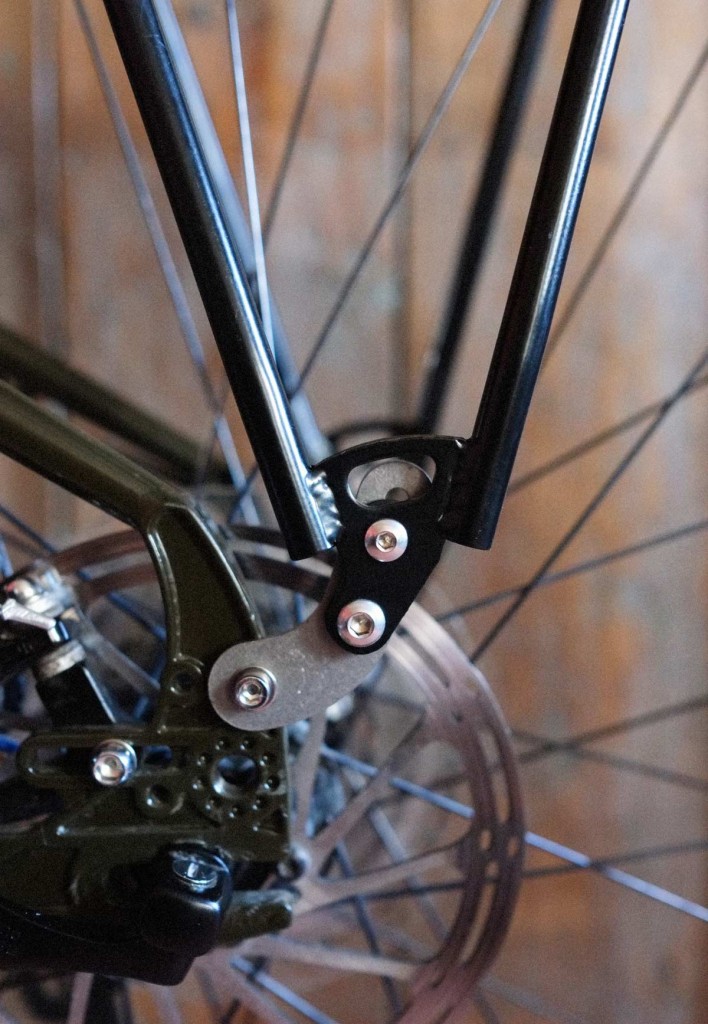 Honestly, about as exciting as this post gets… Tubus Vega with little stainless ‘lifters’.

Moving on then… the stays of the Vega could make a handy spot for carrying stuff… except the tyre sticks up between them. I had a sheet of 2mm ABS plastic kicking around which made a terrific ‘guard’ to fit between the stays, softened with a heat gun and formed around my stainless flask gave it the perfect curvature to provide clearance for the tyre and extra strength for carrying shite. Might also keep some mud off. In my case the shite in question is my fuel bottle. Only taking a tiny 350ml one so bottle cages and so on won’t work.. A couple of slots cut either side of the center line of the ABS guard big enough to thread an old toe strap through and a velcro cable tie to secure the cap to the rack has produced a rough and ready but completely serviceable way of carrying the fuel bottle. I glued a strip of foam rubber onto the ABS to provide a little extra friction and cushioning for the bottle… less likely to rattle. 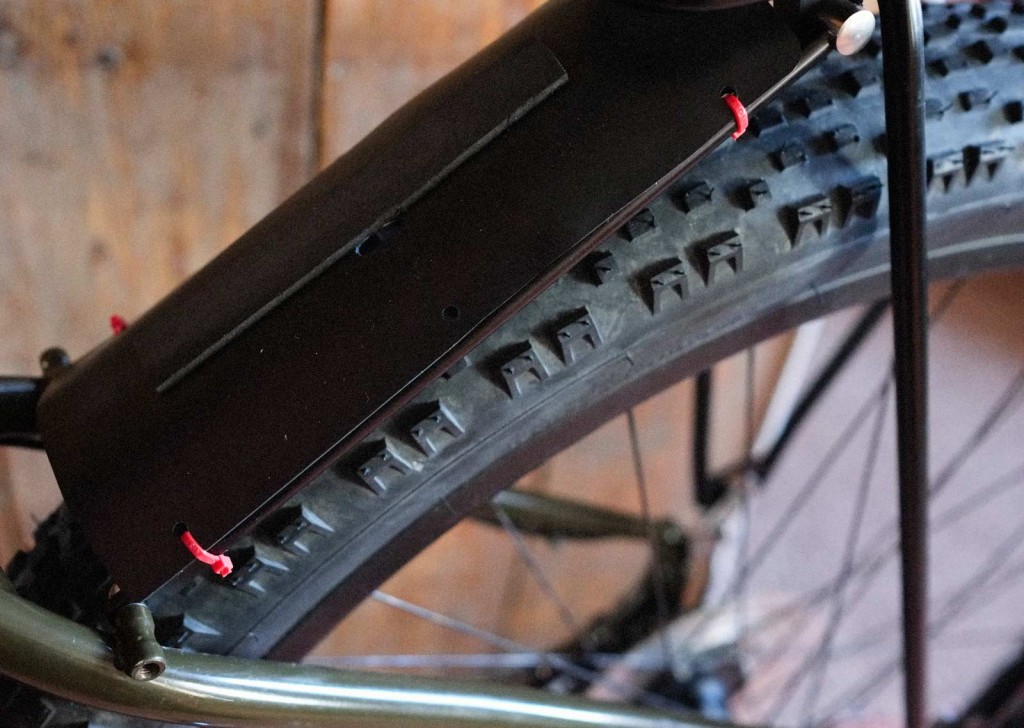 2mm ABS, it’s a tiny bit lumpy as a result of not getting the heating completely uniform while forming the curvature.. but who cares. Quick and dirty. 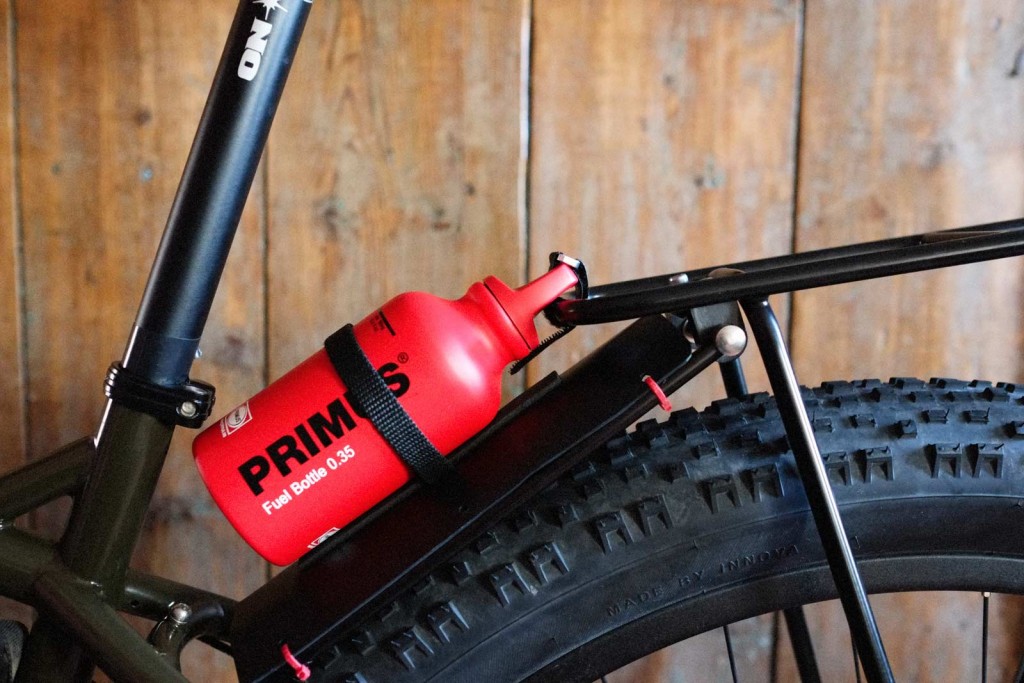 Works well with a fuel bottle though. This one is ashamedly new and shiny. Won’t be like that in a few weeks time :-)

So… where off to. Back to the Indian Himalaya. I did a ride through Himachel Pradesh and Ladakh all the way back in 2003 and have been meaning to go back ever since, but there were so many other places to ride and things to do and so on. So.. when I saw some cheap flights to Delhi a few weeks ago I booked them (and have been working bloody hard ever since to make sure all my work converged and completed such that I could disappear for a few weeks :-). This time probably not heading into Ladakh (but I might), keen on having a good look around Spiti and Kinnaur rather than just riding through, and got some ideas about tackling some trekking routes, or stretches thereof, given my bike.. all depends where my nose takes me and what conditions on the ground are like with respect to how much is rideable, difficult river crossings and all that stuff. I’m really there just to have fun in some cool spots rather than to try and achieve some particular goal.  I’ve got my total gear weight down, including bags, down to below 14.5kg which is about as low as I’m willing to go I think for the environment. Still pretty light though. I can remember what it was like riding a bike at almost 6000m in altitude last time.. and every little bit of weight dropped helps.