Over time gear changes (mostly gets lighter), personal philosophy changes, bikes change and as a consequence so does my packing list for a bike trip. The last time I wrote one (in 2011, here) it represented a pretty heavyweight outfitting for a long, partly off-road journey featuring mountains, deserts and the potential for really bad weather and as such is still completely valid to my mind even if these days I would probably leave some stuff out and other items will have been updated. That was also the last time I used front panniers, favouring instead rear panniers + frame bag + a dry bag under my handlebars if required. Soo… with that in mind here’s my ECR packed as it was for its shakedown cruise in the mountains of Crete.. it’s a packing configuration (i.e no panniers) I’d like to keep for when I take it to some proper big mountains later this year.. which could be a challenge carrying multiple days worth of food and a multifuel stove, but a worthy one.. ;-)

By the way, Cass has loads of useful gear flavoured and packing stuff over on his awesome blog here, and there is also some really good packing/gear stuff over on The Sportswool Diaries. Always worth looking around at what folk at doing – different philosophies, kit and so on. 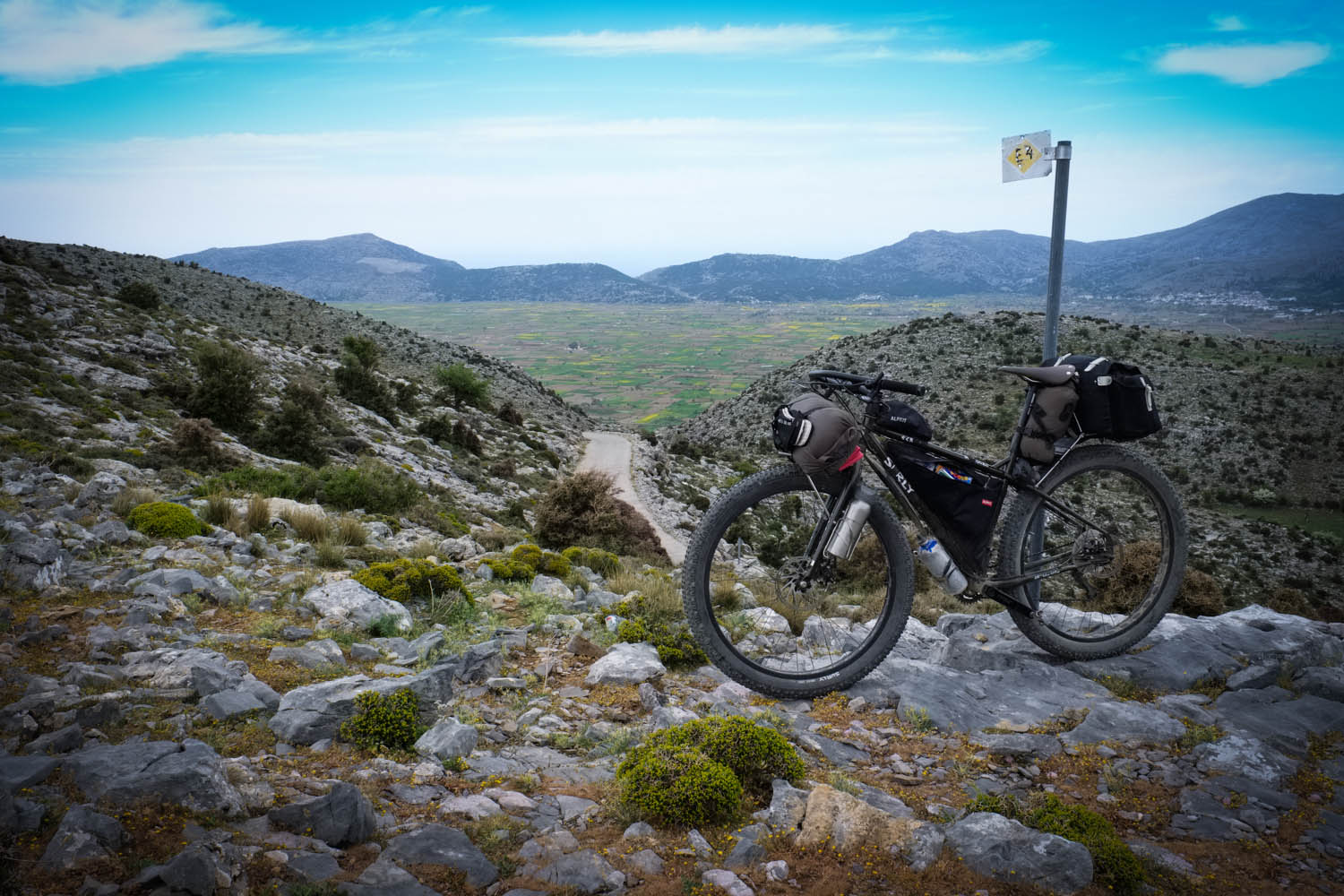 On the E4 Trail above Lasithi

So.. working from the front of the bike backwards…

On the Nitto front rack:

– Alpkit 13l dry bag with my sleeping bag (PHD), Thermarest NeoAir mattress, sleeping bag liner, a small fleece pillowcase that stuffs with down jacket, clothes etc, PHD sleeping bag cover (not required if using a tent rather than tarp, although it is so light that I’d be inclined to take it anyway if likelihood of heavy rain and being very cold), Integral Designs ‘Sil-tarp’, a bit of cheap ‘blue tarp’ to use as a ground sheet, my well-used multi-purpose sarong.

– flipflops for when I’m not wearing my riding shoes

– a piece of folding foam as a seat-pad. Bit of a luxury but it weighs just a few grams and it’s really nice having such a thing for sitting on rocky ground when camping, and serves other random purposes from time to time.

– my MSR Hyperflow water filter, sunblock lip balm and whatever stuff to eat I can wedge in.

– stove (can be little woodburng pocket stove, little gas stove and in future I’m going to have to wedge my Primus Himalaya multifuel stove in here.. or somewhere anyway)

– first aid kit in a really light pertex bag – geared towards abrasions (so pads and stuff) as those are most likely but also a triangular sling (can be useful for things other than the intended use..), painkillers, antihistamine, antiseptic cream etc. Gaffer tape in the item above also extremely useful bit of first aid kit.

– little pertex bag for the pegs and guys I use with the tarp, or if carrying a tent.. for the tent :-)

– rain gear – lightweight Montane jacket and rain trousers that have been with me for years. Pack down very small but seem to be reasonably durable despite the light weight.

The rest of the room in the framebag gets used for food.

My clothes… (not including what I’m wearing while riding) consisting of extra pair of padded short liners, short sleeve merino base layer, pair of bamboo fibre boxer shorts, long sleeve merino shirt, extra pair of socks, lightweight Sealskinz waterproof socks (also warm for cold nights camping), lightweight windproof overgloves, regular t-shirt.. you know.. for looking a bit less feral off the bike when everything else is filthy, a pair of roubaix cycling legwarmers that also double as a sort of long-john for cold nights camping. If I have room after packing I might sling in an extra short sleeve merino baselayer so I always have something clean to sleep in for ex, and if it’s going be chilly then jam in a micro-fleece pullover as well.

There is also a spare inner tube strapped across the seatstay under the bag with a velcro strip.

As an aside I’m very attached to the Endura camo-pattern 3/4 length shorts that I ride in.. they’ve survived multiple journeys and the brown camo pattern is brilliant at hiding dirt.. so I just live in them all the time. If they need a wash can just do it overnight when stopped in a pension or something. I also favour 3/4 shorts because they keep the sun off my legs and are handy for kneeling in the dirt when camping and so on.

Carradice Camper Longflap on the back

The Camper Longflap is ace with it’s extendible ‘lid’ that is great for restraining a couple of loaves of bread for ex on top of everything else). I have quite a lot of stuff distributed around this..

– Petzl Spatha knife.. a favoutrite for years that is near the end of it’s life – lightweight knife with a decent sized blade

– Balm/general purpose moisturiser in a tin – I suffer from eczema and chronically dry skin so my hands and face are prone to cracking in wind and rain. I’m currently a fan of a locally produced one from PureNuffStuff in Penzance.

– chargers for camera and tablet

– small tin with a lump of natural soap in it.. does for showering, washing hair, washing clothes and washing cooking stuff if a handful of sand doesn’t work

– Orikaso folding bowl and mug.. they’re very light but have lasted extremely well, tougher than you’d expect despite me using the bowl when unfolded as a cutting board from time to time…..

– also a couple of packing spares as it gives me options for carrying extra food for ex over an extended section – consisting of a lightweight Alpkit dry bag and a couple of extra straps so I can lash stuff to my bars or on top of the Carradice bag for ex. Combined they pack really small but very useful from time to time

I think that’s just about it. My camera isn’t in there.. because my Fuji X100s is so small & light I started carrying it in a small waist pack to free up more food room on the bike. It wasn’t annoying in the slightest. It’s not waterproof but if it rains I just wrap it in one of the couple of pedal bin liners that are stuffed in the bag with the camera.

Food wise.. stuff just gets distributed wherever. Haven’t yet figured out where I’ll carry the stove fuel bottle on the next journey as I rather value being able to have lots of water in bottles on the bike.. but no doubt I’l sort something out. I did recently pick up a 20 litre folding backpack made from siliconised Pertex that packs down to the size of a plum and weighs just 60gr.. it’s phenomenal.. the idea being that if I’m facing an exceptional stage of say 4 or 5 days (or more) in the mountains without access to supplies I can just move some soft stuff off the bike into that and fill the bike up with food.. rather than carrying around larger bags/panniers that will be redundant much of the time. I don’t like carrying a backpack when riding but for a few days I can live with it. The foam seatpad mentioned above should work quite well as a backpad inside it. The straps are quite slippery but a bit of cord tied across my chest does just fine to stop them slipping off my shoulders.