It took a whole year of procrastination and the opportunity to acquire one at a somewhat reduced price, but on reflection I think it was inevitable that it would happen; the possibilities for grin-inducing adventures aboard a fat-tyred, off-road cargo bike, not to mention just not having to use a car, were just too great to ignore. Initially I had been thinking about it purely from the point of view of whether I really did enough hauling of stuff to need such a bicycle, a perfectly valid approach but one that ignores the fun potential… as well as reducing still further any reliance on cars. At first glance for most the Surly Big Fat Dummy wouldn’t meet expectations of an everyday bicycle but really it is when you think of what it can do from taking kids to school (the rear deck will take seats and is rated for loads of something like 250lbs) to picking up groceries, shifting furniture, farm work, taking a kayak to the beach…. 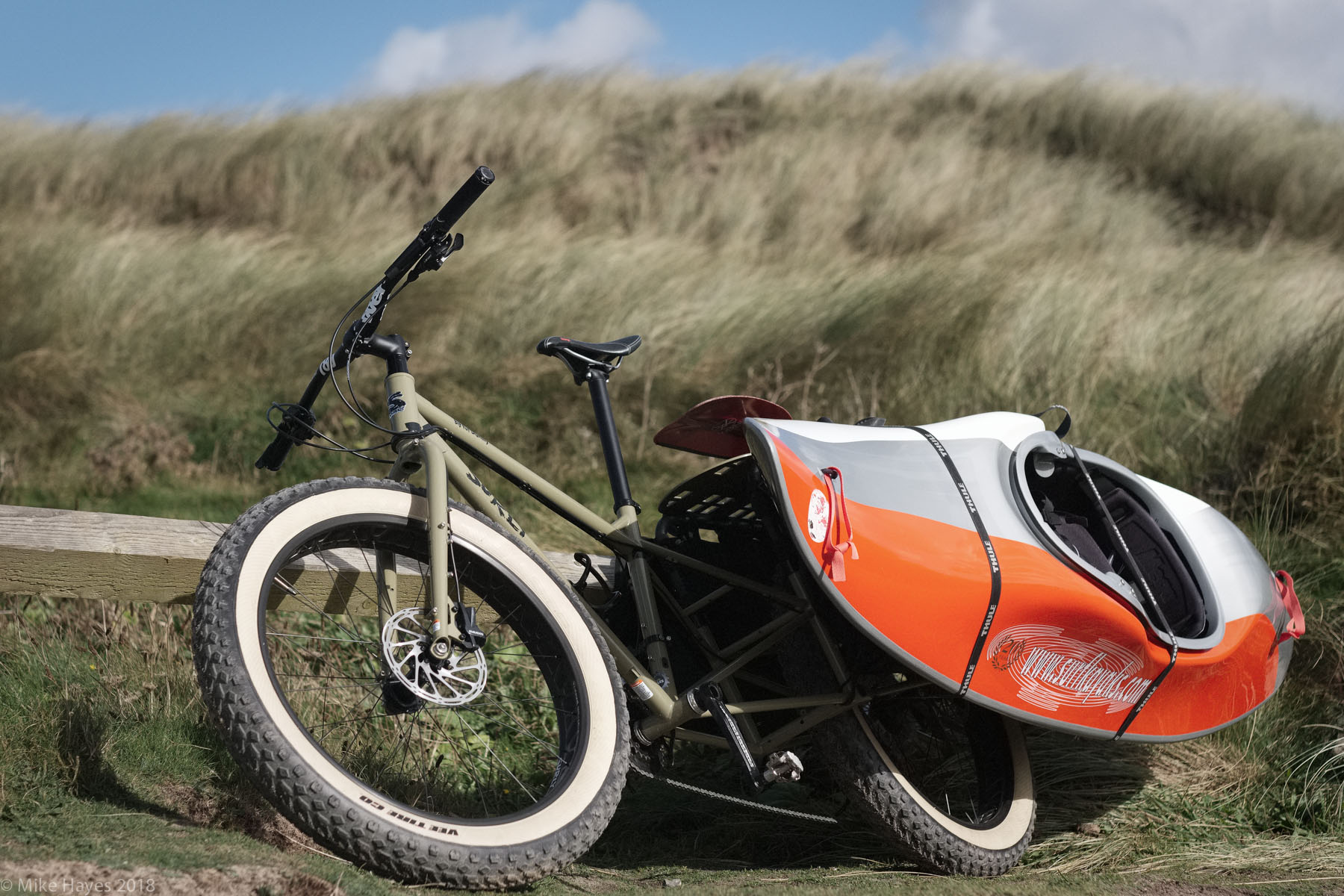 I hardly went near the beach this summer. Cornwall was utterly overwhelmed with tourists to the extent that certain roads to the beach in west Cornwall were gridlocked for hours at a time. Having to deal with crowded roads, high car parking fees,and zealous parking enforcement officers felt like a really shit way to bookend a session in the surf so I just didn’t bother. With the Big Fat Dummy however I can head to the beach via a mix of trails and backroads, park up away from people, and stay for as long as I like… For everyday use I fitted some slightly less bonkers 4″ wide rubber to replace the super fat and knobbly 5″ stuff that was on there initially. I’ll save that for off-road travels.  I may be somewhat biased but parked up next to all the expensive ‘lifestyle vans’ that fill Cornish beach car parks it was pretty clear to me who had the coolest set of wheels…

Having lived it with for a couple of months now I’m very happy; it is a very fun bike to ride whether I need to carry a lot of crap or not, and as well as finding unexpected reasons to use it I find myself making excuses to take it rather than a normal bike on occasions when I don’t need to carry much stuff at all. It’s a big bit to stick on a plane but a mate is building one too and we’ve been bouncing around ideas around for some winter expeditiony type stuff in Scotland.. something at which it will excel with all the carrying capacity for bulky warm clothing, bottles of fortifying whisky and so on..  It is also a terrific machine for challenging people’s preconceptions of what is possible by bike. Drivers mostly seem to think it’s a stupid idea judging by the looks on their faces, something I find perfectly ironic, while other folk seem utterly baffled by it and either want to know where the engine is or what the point of a tandem without a second seat is… or simply can’t wrap their heads around it at all… although one woman did stop me on the beach one evening to tell me how pretty it was… sentences involving beauty, eyes and beholders spring to mind perhaps. Hauling a huge load of garden waste to the recycling center recently was a delight if only for the baffled looks and attempts by others not to stare too hard… I also managed to pass a couple of cyclists on ‘proper bikes’ enroute which was even better… The only downside of the thing, if indeed it is one, is that the less I have to use a car in every day life the less I want to; for the last 12 months my piece of crap old car averaged just 200 miles/month. I expect that to drop even further now. Cars, the relationships people have with them, and the way they’re promoted as a panacea for that which might seem wrong with life, not to mention the continuous financial drain, all feel a bit toxic in the context of living a low stress, satisfying, sustainable life. 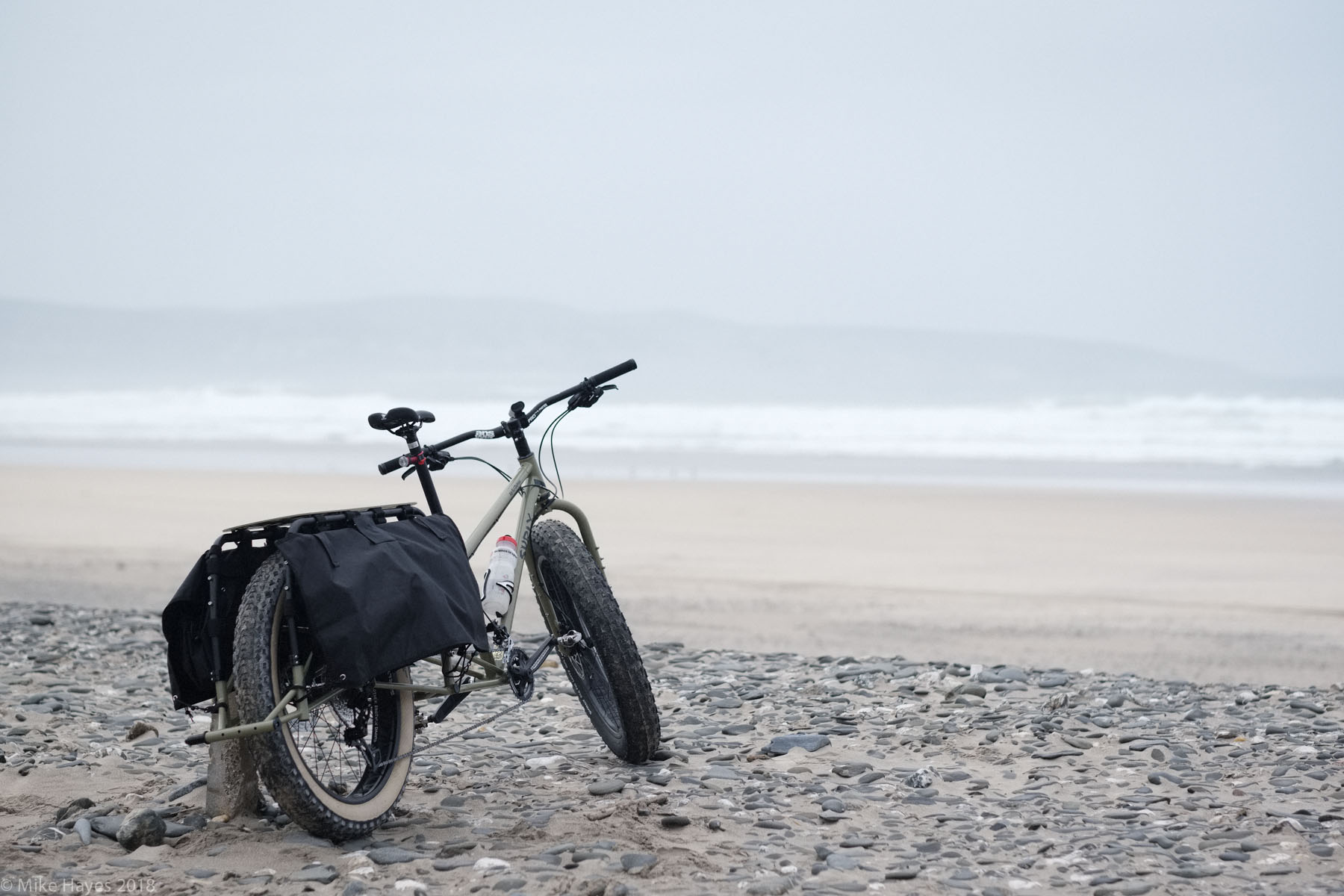 The Surly Big Fat Dummy and the beach are perfect partners I think and not just because of the flotation from the fat rubber. I rather like the idea of making a removable solar powered (+ battery) beer fridge arrangement for summer BBQs with friends. 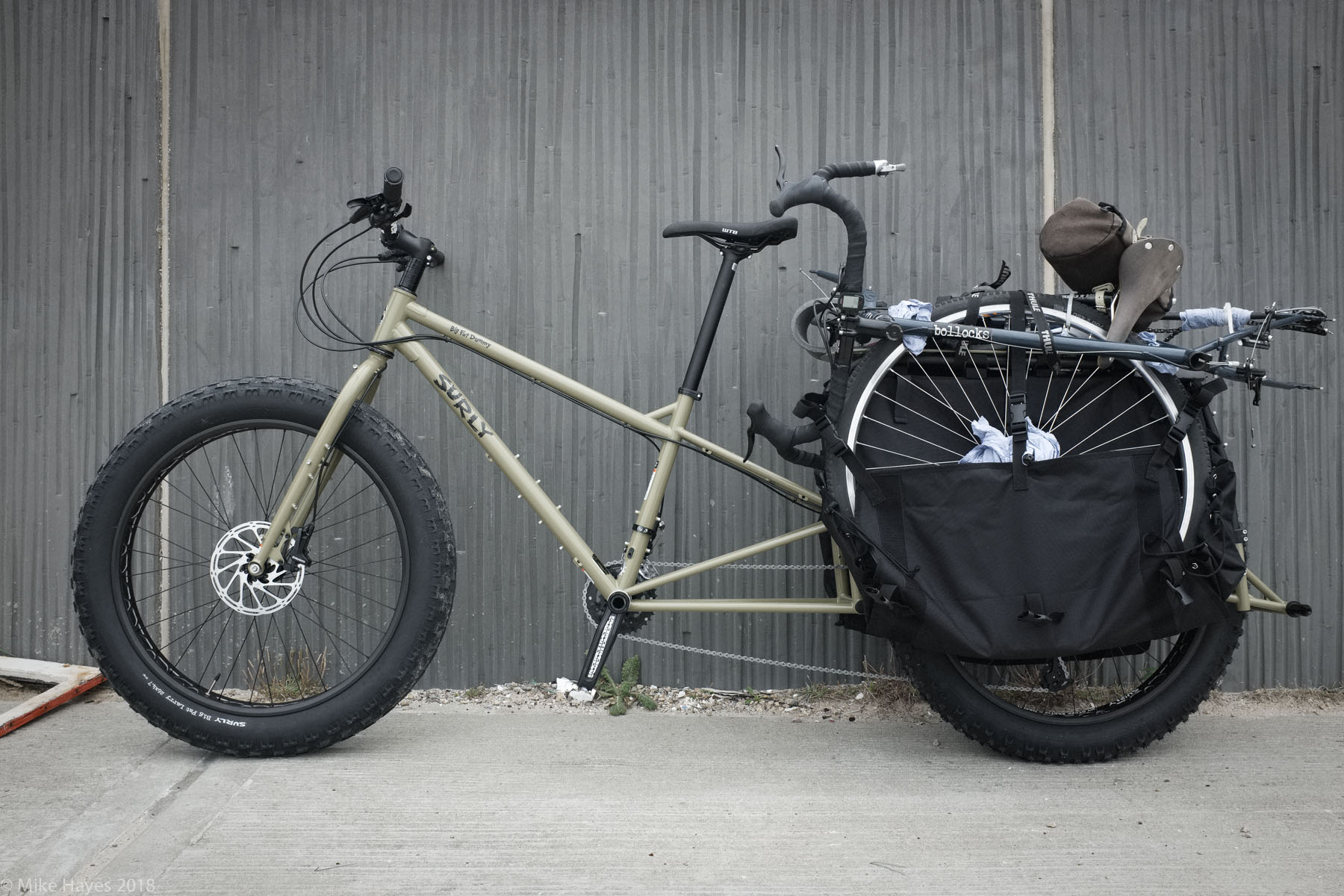 It will also carry another bicycle should you need to.. kind of like people that go on holiday in their RVs and tow a car behind. I must confess this was something I’ve wanted to have a need to do for a long time and it was brilliant. That’s my trusty old Surly Cross Check on the back. 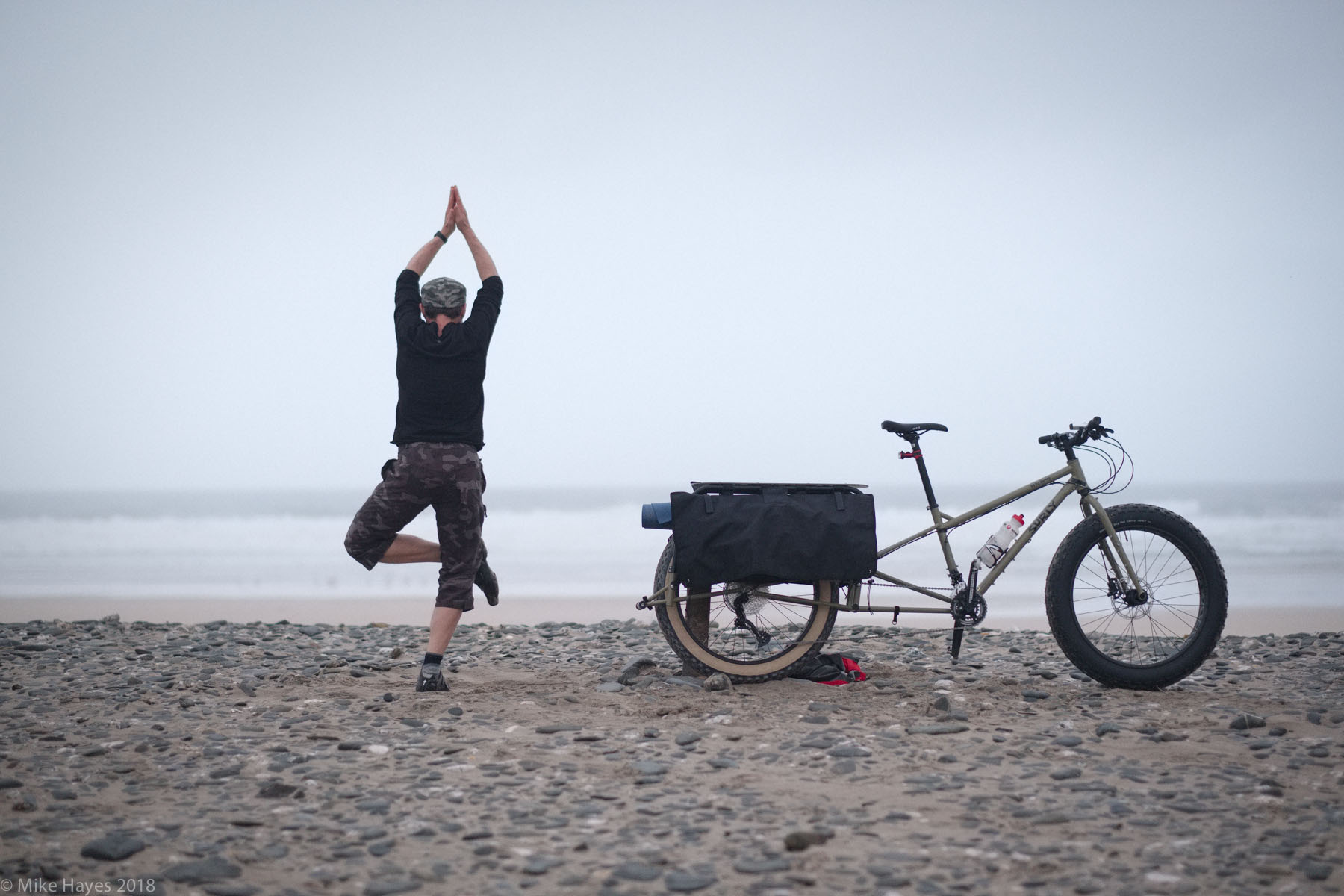 I’m a little teapot…. my friend’s beach yoga sessions are continuing through autumn, but not only that “Big Fat Dummy chilly drizzle beach yoga” is also a thing here in Cornwall now. We’re a pretty hardcore bunch. 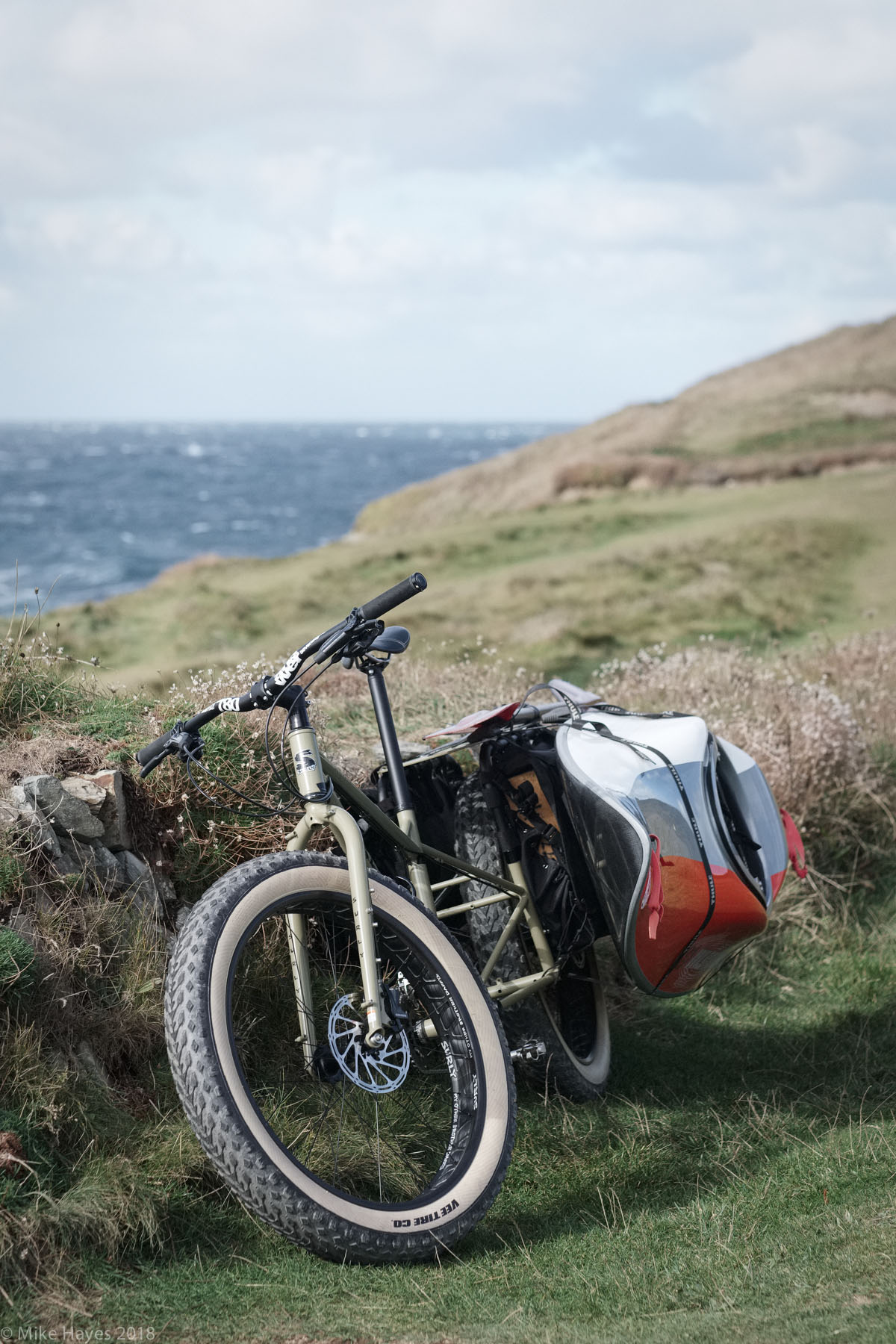 Back to the surf kayak.. I had planned to make a custom sling for it but while mucking about with concepts and working out the spacing needed for it to clear my legs I found that with careful strap positioning and a 4″ thick block of foam inside one of the panniers the kayak could be held very solidly. This is perfect because the panniers are a faff to remove to and fit. The only change I’m going to make is to replace the heavy foam block with an inflatable pad. All my paddling gear goes in a dry bag on the opposite side which, together with a hefty lock, balances it all pretty well. The paddle just straps to the side of the deck alongside the kayak. 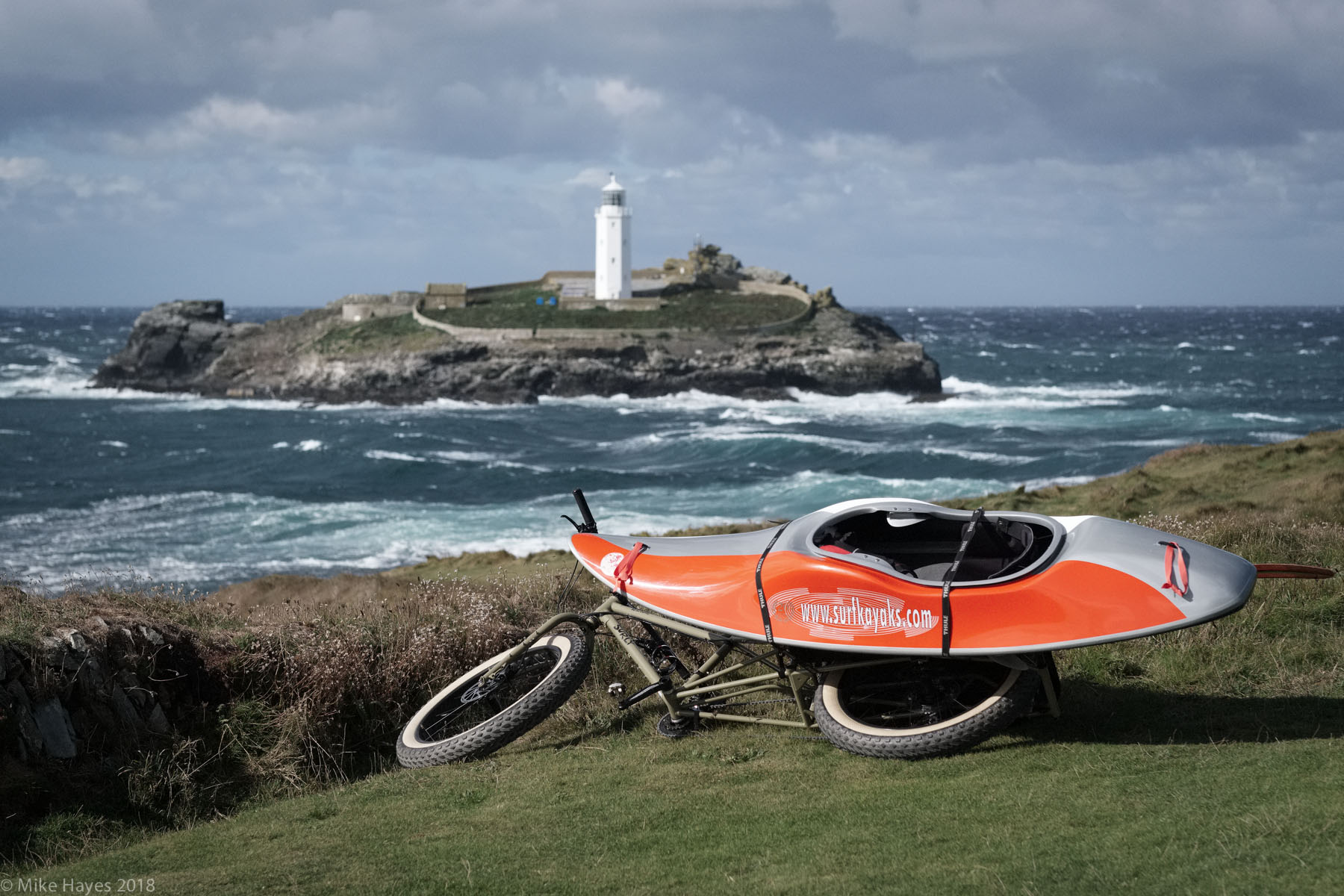 I’ve been having a bit of a love – hate thing with my surf kayak recently. Because I haven’t been in the water much of late, too much time on two wheels, I’ve suffered some skill fade with regard to rolling it – as a short, wide HP kayak it’s fantastic on fast, steep waves but, unless I’m paddling it regularly I find it a bit of a pig to roll in surf, at times exhibiting more kinship with a large sheet of plywood than a kayak once it’s upside down. It makes the paddle out in big surf a bit fraught at times which isn’t always ideal when working on getting one’s mojo back. Swapping it for a more forgiving boat feels like the easy option, not to mention the more expensive, so I imagine I’ll keep on with the brown trousers approach to it for a bit and try and get back into a regular surf habit. Something that feels much more accessible now that I’m car-independent for that :-)

For a project to make some laminated wooden fenders for a Surly Big Fat Dummy click here. 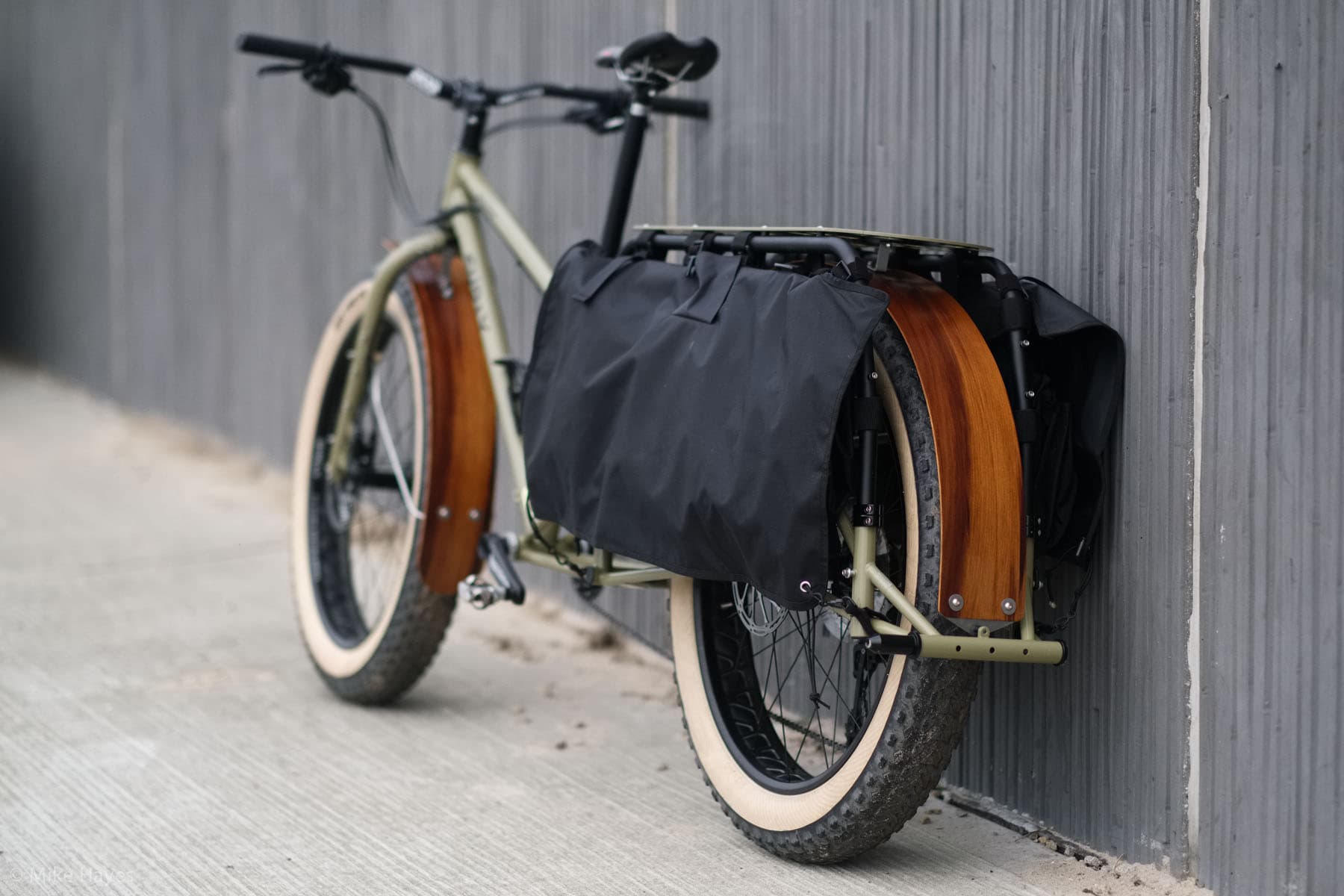 A bit of a winter workshop project to laminate some wooden mudguards for the Dummy. Deeply satisfying and look ace.. in my opinion.