*** Caveat.. this is now a really old list. I haven’t got around to updating it for most recent bike travels. There is an update that’s more minimal – link here  that’s also not quite bang up to date but may be useful…***

This is the latest iteration of my packing list as of March 2011… this is what I carried in the Andes. You could go lighter, I was geared for rain, sub-zero temperatures and high winds. For a shorter, fairer weather trips a small bivy or tarp tent would be perfect, as would a lighter sleeping mat and you could leave out some clothing and the tarp… and some other stuff of course depending on where you’re going… water filter for example.

I have listed by bag/pannier as it might show that that there is some logic to my bike packing.. maybe. So this is what my bike looks like on a cycling day.. (where I have reviewed a bit of kit elsewhere on this site I have hyperlinked to the relevant page). This lot weighs about 21kg including the panniers themselves, but not including food. I could go lighter easily but experience has shown that on a long trip the extra luxury of a bit more gear is quite welcome, and 21kg is still very light compared to most folk I meet who are often carrying 30kg or more. As a general rule of thumb if I cannot lift my bike (with food and water on-board) with one arm then I have too much.. the logic being that you may find yourself in a situation of having to negotiate rivers, drop-offs (for example between Lago O’Higgins and El Chalten here) or load/unload your bike from trains, boats, buses or trucks quickly, and especially if there are thieves around as is often the case in cities it is nice to be able to manhandle the lot all as one…

Me (typically) from head downwards:

My 1 litre fuel bottle is also strapped on the back, it sits nestled in between tent and rear right pannier. I burn gasoline but use a little bottle of pure alcohol, v cheap from pharmacies, for priming. It reduces the soot. You can also burn Benzina Blanca instead, also burns cleaner than gasoline but is about 4x the price. Buy it from ferreterias.

That is about it, I probably forgot something as I am writing this in a cafe.. but I’ll go back and edit later if I did. The logic in my packing is that stuff I need to get at while on the road is all on the left hand side of the bike.. so that riding on the right if I stop and lean my bike against something at the roadside then that stuff is always on the outside. Clever eh…

One other thing is that the Ortlieb front panniers rattle at the bottom on my racks on bad roads no matter what I do.. hence the bungee cords you might have seen wrapped around them in some photos. I don’t use a bar bag, I don’t like having stuff on my bars and my gear is compact enough that I can fit my camera gear in my rear pannier quite easily. It is as quick to reach, I reach round, release the strap and pull it out from it’s bag that sits at the top of the pannier.

In combination all the clothes I have work together well to handle various temperatures/conditions… and the merino stuff is amazing for not being smelly after days (and days) of use. Excellent stuff.

As for my bike… you can see that here. 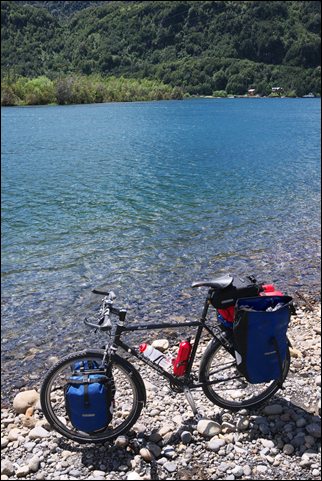