One for the bike nerds :-) It was inevitable really I suppose that sooner or later along would come a new dedicated fixed-gear TT machine to replace my now long-gone Condor Stadio… Budget this time around much much smaller so nearly all second hand parts, which is no bad thing, but I in theory the end result is a quicker bike… if not quite so pretty.. 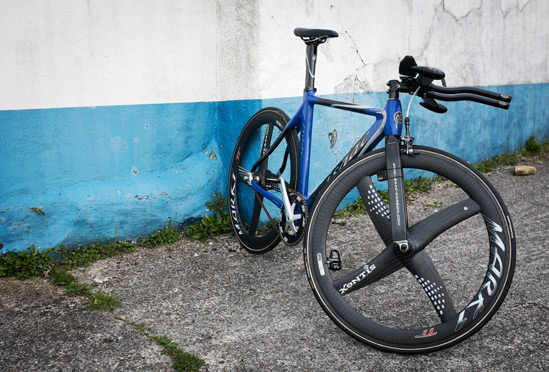 I couldn’t afford new Xentis wheels when they first appeared… and still can’t ;-)

The frame was a really lucky find. Back in 2005 I was racing on an Isaac ‘Efficiency’ TT frame.. that was before I started TTing on a fixed.. then in 2006 I adapted a steel Condor Pista EOM for fixed gear TT use.. at the same time Isaac started producing a track frame called the Velocity which was essentially identical to the Efficiency – popped out of the same mould but with some bolt-on track ends and no cable guides. I remember being tempted then but I was only just getting to grips with racing a fixed wheel so did nothing about it. Fast forward to now and I recently found a secondhand Velocity frame. Given it’s background it is the perfect tool for fixed gear time trialling – nice and low at the front end, with a steep 76 degree seat angle and a slack front end to keep things predictable when forward on aero bars. I also lucked out with a bunch of decent parts for a build.. Dura Ace track crank, some Xentis Mk1 TT wheels with a factory-fit track axle and even a “well-used but still good and spangly” USE Tula bar – minus the left hand brake lever which would be redundant anyway. I had a  Tula in 2008 on a BMC Time Machine.. (a geared aberration..;-).. they were eyewateringly expensive when new even then.. I think when I can afford it I’ll stick a set of black Sugino 75 cranks on.. but that’s about all I’d like to change. The only new part on the build is the stem, the rest either secondhand or from a now quite depleted parts bin :-) 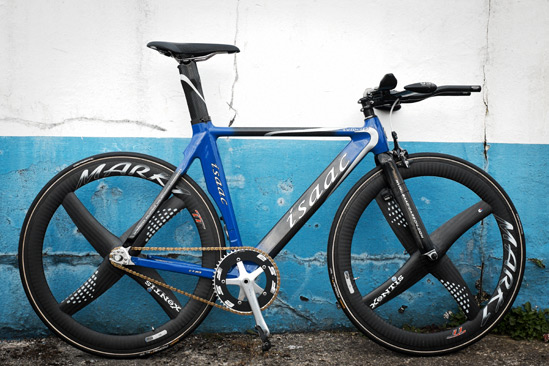 everything has a few chips and scratches but is still in fundamentally good nick.

Cornish courses are far from flat so I’ve geared it at 52 x 13  for this weekend and very interested to see how it goes. The bars could drop a little lower for better aerodynamics but I have found when on a fixed I’m better off a cm or two higher at the front than on a geared machine.. it lets me make better use of my back muscles on the uphill sections while still in a tuck. (update: after experimentation subsequently settled on 57×14, 57×13 if flat, for most courses later in the season) 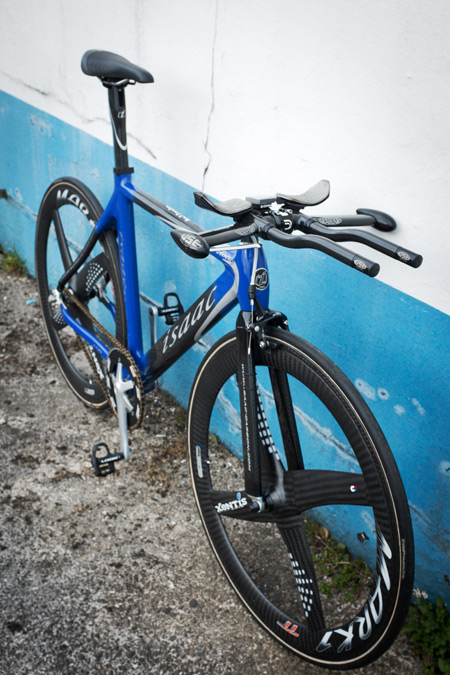 This has made me all nostalgic for past TT machines (road bikes whole other topic..).. wish I still had the Joe Waugh 653 (student, 753 was out of reach) I used for TTs back in the very early 90’s… ho hum. In the meantime however have got good reason once again to have to dig out all my previous fixed gear PBs for Cornish courses and see if I can do better… :-)