In the end I needed 3 nights in Puerto Varas to get all the inflammation under control and my head back in the right place :-) Time well spent eating cake, watching movies, reading and generally chilling out. The only downside to the time spent in Pto Varas was that some miserable bugger stole my MSR fuel bottle. My bike was parked in the covered interior courtyard of the hostal, pretty much out of sight and not accessible by anyone other than hostal staff and curious guests. I have little doubt it will have been taken by a backpacker rather than a local. My fault for leaving it on the bike, I figured as it had gasoline in it I should leave it with the bike rather than take it indoors. It could have been awkward, such stuff is generally hard to find but at least Puerto Varas has a mountain guide/outfitters.. and they were able to sort me out with a replacement. Phew. 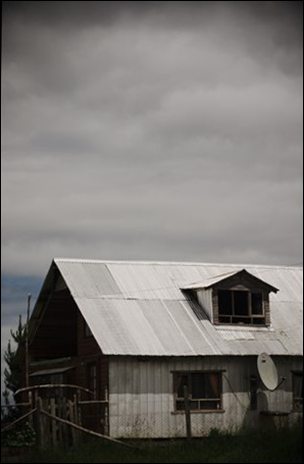 The 110km ride from Puerto Varas to Ancud was a good one. At last it feels like the journey is properly under way rather than just mucking about in the lakes trying to get over being sick, and I had good legs :-) Hurrah!
Riding out of town I passed a local woman carting her child around in a wheelbarrow. Makes an awful lot of sense compared to those fashionably expensive pushchairs with large wheels beloved of mothers in the UK. After all you can use it for an awful lot more than just your child.. like carting firewood or horse shit around for example and I expect a wheelbarrow is far better on difficult terrain :-) The best means of carrying a child however, in my humble opinion.. is the simple cloth sling you see among the people of the high Andes, aside from the obvious benefits like being cheap, simple and leaving hands free, from a childs point of view it has to be the best place to be, high up and reassuringly close to mum, peeking over her shoulder and relaxed by the natural motion of walking. Compare the western way.. in a pushchair, low down and looking up at all the big people and motorcars.. and exposed to the big, scary world by being shoved out in front. Is it any wonder kids at home seem to scream a lot yet in the Andes, in my experience, they are as good as gold… funny how the ‘developed world’ often involves complex, expensive and inferior solutions to problems that weren’t really problems at all. 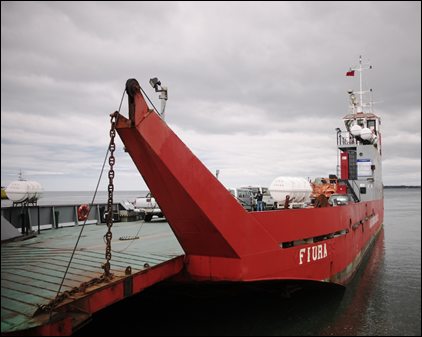 the ferry to Chiloe..

Anyway, I digress, soap box away… back to the road. 30km of ugliness getting past Puerto Montt and then another 50km, straight as a die to meet the ferry to Chiloe. This stretch of road was not particularly memorable.. it passes through an unchanging area of scrubby forest with little smallholdings carved out of it and punctuated by occasional shacks weathered to the same colour as the cold and heavily overcast sky. The only brightness in the landscape this day being the occasional large bill-board appropriately advertising chainsaws of the chunky variety beloved of lumberjacks around the world. 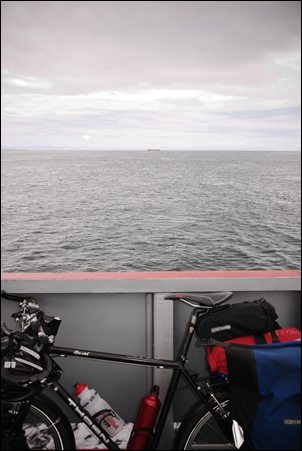 bleak on the water

The ferry however.. now that was a different matter. Bicycles and boats go together on journeys like fish and chips.. they are an ace combination. Aside from getting a chance to rest ones legs a boat ride really gives a sense of the journey, of leaving one place behind and arriving somewhere new, somewhere isolated by a stretch of water. In this case the island of Chiloe. It is not a long journey across the Chacao Channel, just 35 minutes or so.. but it is enough. I was able to ride straight onto the ferry just before it departed. On board I met a friendly family from Bariloche in Argentina here on holiday. We chatted a while before they sought refuge from the cold wind in their van. Just 10 degrees or so on the water today. 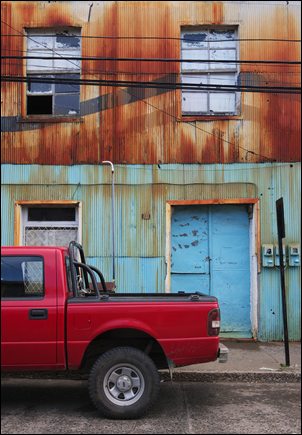 Riding off the ferry with just 30km or so to go to Ancud I met a Dutch cyclist enjoying a brew at a roadside shack. He had arrived on an earlier ferry and was also headed to Ancud and eventually on to Ushuaia. Our conversation however was somewhat limited, he had no Spanish and only a little English. His bike caught my eye… it was a techy wonder… a German machine with chunky and rather square alloy frame members in gleaming white and gold, a Magura suspension fork, Magura hydraulic rim brakes, a Rohloff hub and lots of pretty carbon and CNC’d anodized alloy parts. As an exercise in bicycle technology it looked pretty amazing.. but as a bike for adventure touring on it looked, errm… hideous.. Is that rude? With a suspension fork up front all his gear was piled on the back.. and in a backpack which must really have sucked. It looked like he had about half as much gear again as I do.. and his tyres were off-road knobbies of the super soft and sticky variety. This is not intended as a criticsm, different strokes for different folks and all that.. but a significant.. really significant amount of wedge would have had to change hands, in my direction, to get me to swap my old steel Nomad for that. We rode together for a few km.. the buzz of his rohloff and the energy-sapping sound of his tyres sucking the asphalt in contrast to the silence of my derailleur transmission and Marathon XRs pumped up as hard as I thought sensible.. and then a little more to ease to my passage across the asphalt. He fell quickly behind on the first hill.. I dawdled to allow him to catch up at the top and figured he may as well sit in on my wheel in the fresh headwind.. it didn’t work, as soon as the road went slightly up again he was off the back. Always a mild ethical dilemma.. to hang about and wait or just to ride away.. I chose the latter. After all we’re not riding buddies and if I met someone on the road faster than me the last thing I want is to hold them up. We will meet again I suspect with just one boat off this island to Chaiten.. at midnight next Friday night. The witching hour, it’ll be a couple of two wheeled pumpkins riding onto the boat… 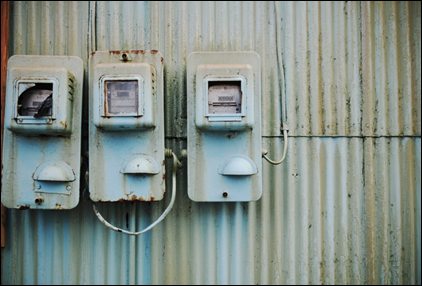 The ride into Ancud was a pleasant one, the last few km along dunes on the pacific coast before crossing a long bridge into the colourful, weatherbeaten town with the familiar aroma of fish on the breeze coming from the harbour. It is a friendly town too, more than a few folk along the road nodded greetings as I passed and a crusty old salt at the harbour I asked for directions was positively gushing in his conversation. 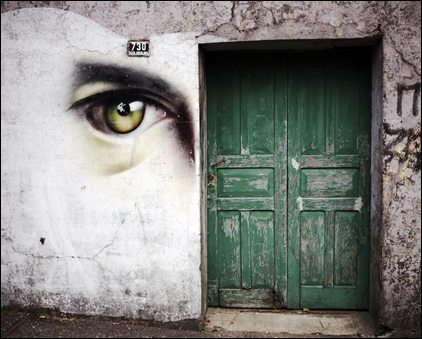 the evil eye of Ancud..? nah, it is a great place.

Wandering around after arrival I bumped into the same family from Bariloche I met on the boat. We shared coffee from their flask while sitting on the quayside looking at a couple of old hulks and some seaweed. The conversation came around to the variety of dialects in Chile and Argentina. Interestingly they said that the further north they go in their own country then the harder they find it to communicate. I have the opposite experience, the southern dialects down here are harder for me than in the north where the language spoken is closer to regular Spanish.

Anyway, little else to report, other than the lomito wolfed down on arrival that I realised, after most was gone, was not cooked properly.. buggerance. A quick visit to the bottle shop for a litre of aged rum, sadly not available in a brown paper bag, by way of a preventative measure (it’s true, it does work.. google it) hopefully will keep me well. I didn’t drink the whole litre of course, I would not be here writing this.. but please excuse any typos ;-) One of my water bottles is metal with a screw cap. Strikes me as the perfect vehicle for taking a drop south for those lonely tented evenings.. So how good does rum at £3 a litre taste… umm, pretty damn good actually :-)