Puerto Varas, I have a room in a rambling old hospedaje.. a veritable rabbit warren of dark wooden corridors and alcoves illuminated by little rectangular skylights. There are redundant bakelite fittings on the walls from an earlier electrical age and I can enjoy such curious innovations as the light switch for my room being situated on the outside of the door, or an old enamel sink, complete with pot-plants, plumbed into the stairwell. I am coming to the conclusion that southern Chile exhibits a peculiar flavour of weirdness absent from other South American nations. 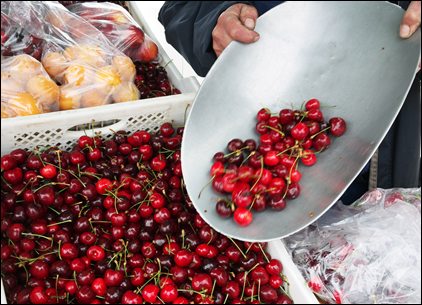 cherries in season and available on every street corner. I have indulged. Significantly..

It is a fine day for hanging out, the rain is coming down in buckets and every so often the building is rocked by a blast of wind. I changed rooms earlier this morning thanks to a leaky skylight. 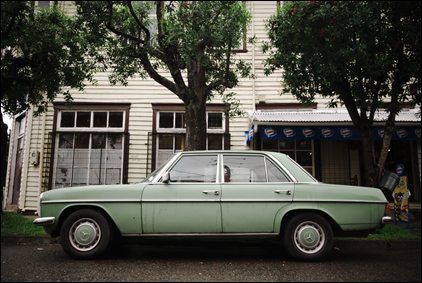 The town itself is small and pleasant yet as with all up and coming tourist spots it is perhaps over-endowed with trendy little cafes, restaurants and bars. Prices are worthy of a European resort although there are still a few local-flavoured eateries in the backstreets that will do a 3 course set lunch for around 2500pesos. In keeping with the outdoorsy resort theme both Salomon and The North Face have boutiques here.. but they don’t sell anything useful like tents and big knives and stuff, only the fashion lines are available at prices that appeal to the wealthy package tourist. 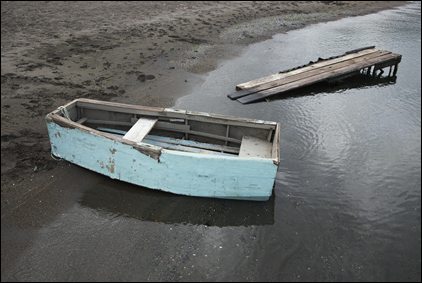 There is a black sand beach on the lake-front past the modern casino. As I walked past the Star Wars theme was drifting out over the mist-enshrouded lake and the vaguely ship-shaped pile of twisted metal on the beach. One wonders if the town council put it there deliberately to enhance the ‘atmosphere’ or for small children to hurt themselves on. 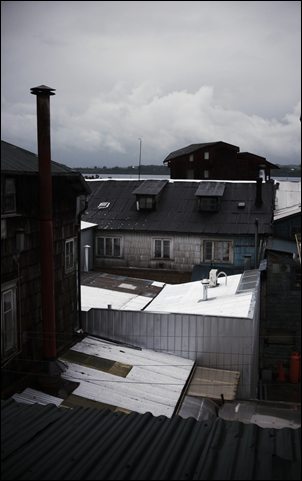 even the prettiest of things have an arsehole.. actually I think it is rather characterful, it's the view from my room

I feel I should apologise for my little whinge yesterday, lol, I was at a low ebb. Still, at least I’m not hiding any reality…  Still feeling rough today but there is no rush to leave. I had felt pressured to catch the once a week boat from Quellon at the south end of Chiloe to Chaiten, but say I take a week longer.. it’s no big deal. I am wondering whether to go to Chiloe at all now and instead catch a boat from Puerto Montt to Chaiten. You see I just met a Swiss couple who came from there. I asked them what it was like. They said “like Switzerland”. Damn, I didn’t come all this way just for chocolate and cuckoo clocks ;-) 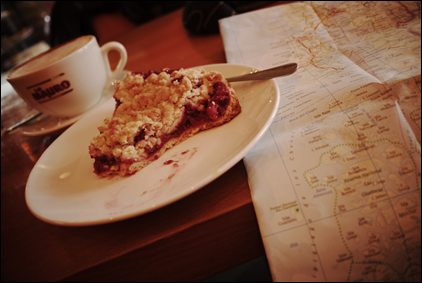 what a cyclist likes.. 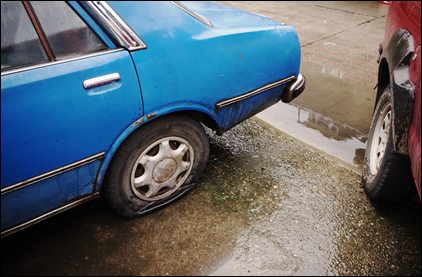 I cannot help taking pics like this, just colour and shape. It says nothing about Puerto Varas.. other than that there are some scabby old cars with flat tyres. I nearly posted a picture of the 'Super Pollo' truck.. "No hay pollo como Super Pollo". Indeed. 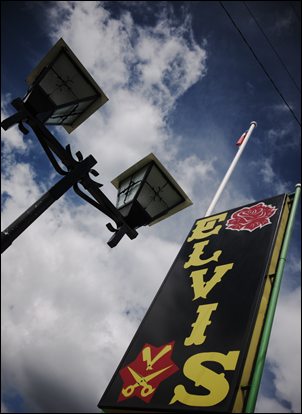 Elvis lives! As a hairdresser in Pto Varas it seems..

p.s there are two volcanoes ‘visible’ from town. The Osorno one is a perfect cone, happily the sun was shining when I came this way in January. Here it is: