It was a very definite sense of deja-vu. Not the first time I’d found myself sat by a fire beneath a wonderful starscape on a cold night on top of a mountain sharing a meal with a friendly Berber. That previous time, a few years ago, it was on top of the Tizi n’Test and I was on my way out of the High Atlas headed south to the Anti Atlas.. This time I was heading north towards the High Atlas and the pass was the Tizi n’Tazazert… 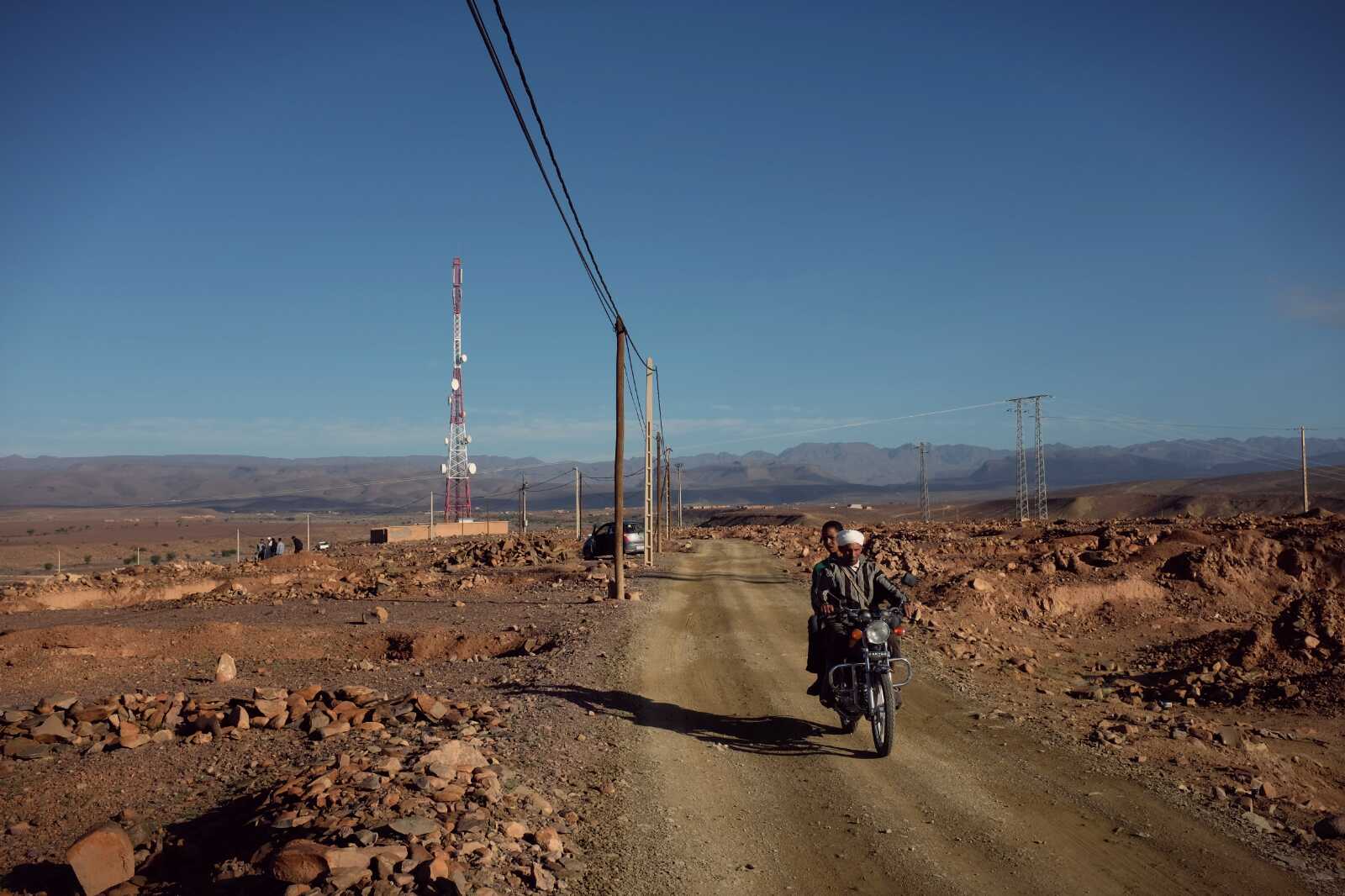 the road out of N’kob on a lovely, fresh morning

In the event my second forced day off in N’kob turned out to be no bad thing, around midday a big storm system moved in with torrential rain and almost non-stop thunder and lightening. It would not have been a fun thing to be caught on a bicycle on an exposed mountainside in such conditions. The morning I did leave however the storms had cleansed the air and put down the dust on the trail north out of N’kob. I was still feeling rubbish but dosed up with aspirin had the feeling that while riding mightn’t do me any good I was probably past the point at which it would have made things worse.. I’d always planned to take 2 days over the traverse of the Jebel Sahro with a high camp somewhere so loaded down with food and water figured I’d just trundle… to the extent that it is possible to trundle when climbing over a mountain range on a rough dirt track.

It was a truly spectacular journey…. although I am paying the price now here in Boumalne, still chesty and feeling absolutely destroyed… but well worth it. Rather than sling a load more words your way I’ll instead throw some pics at you, and then I can go back to sleep :-) 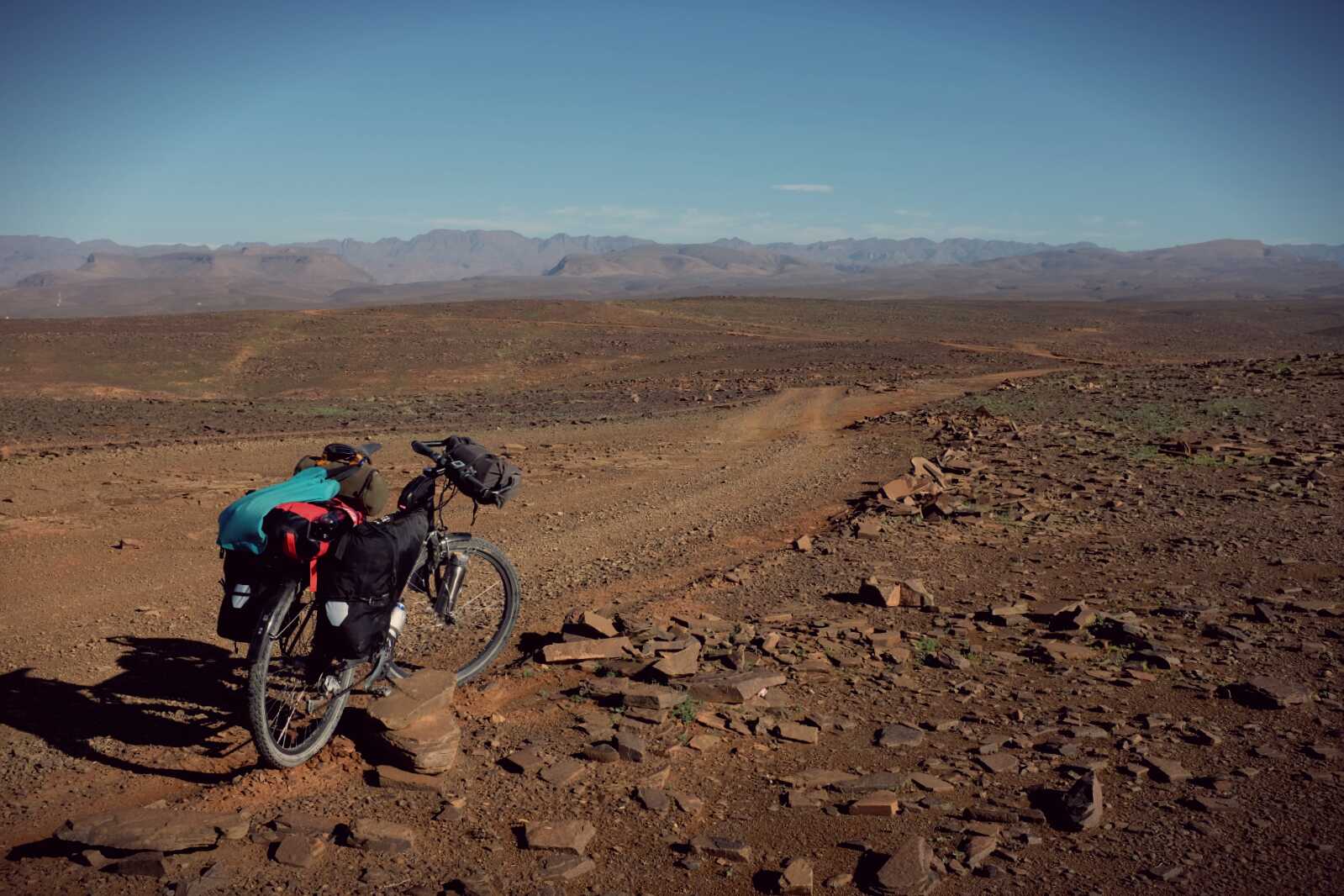 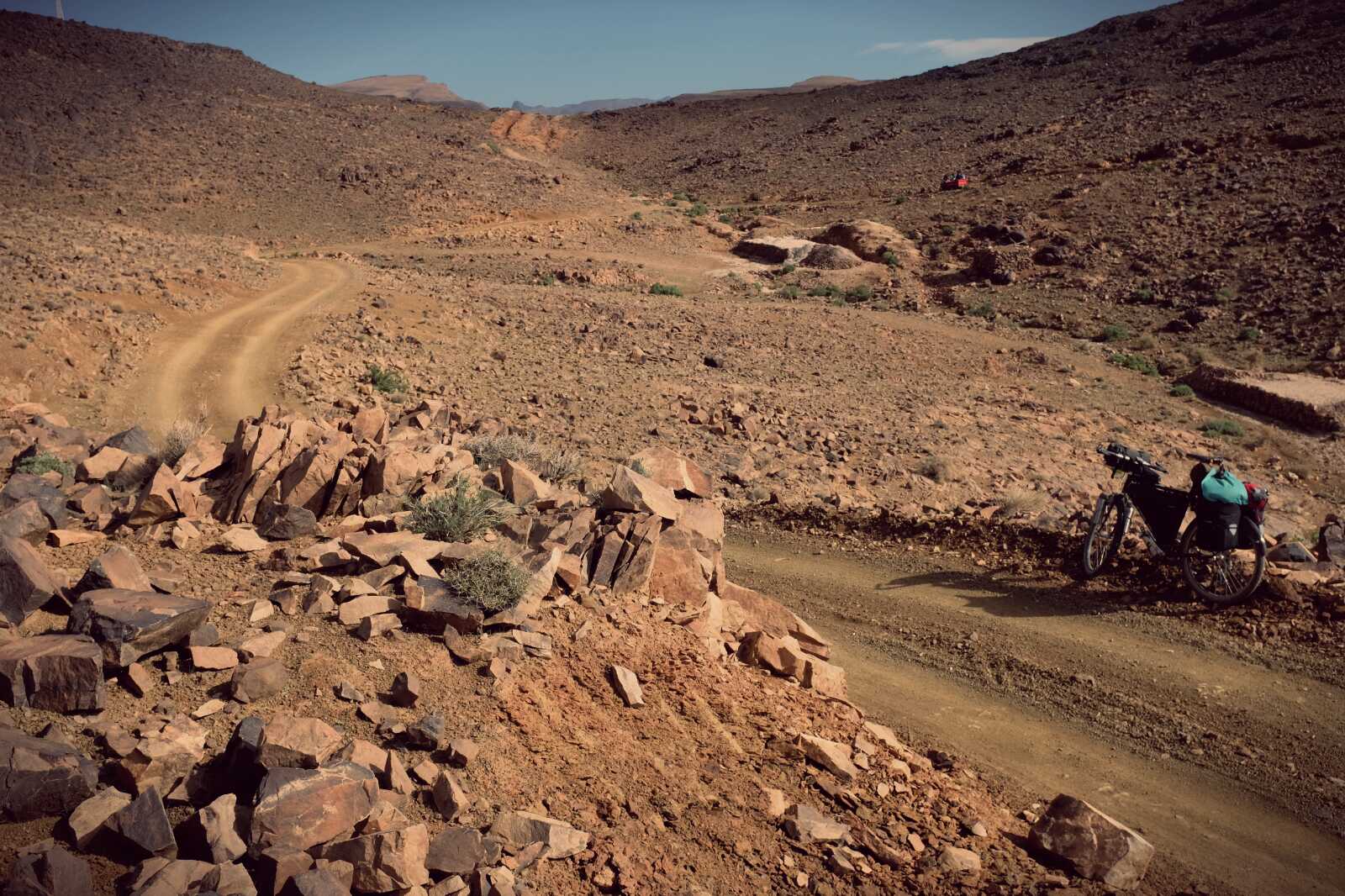 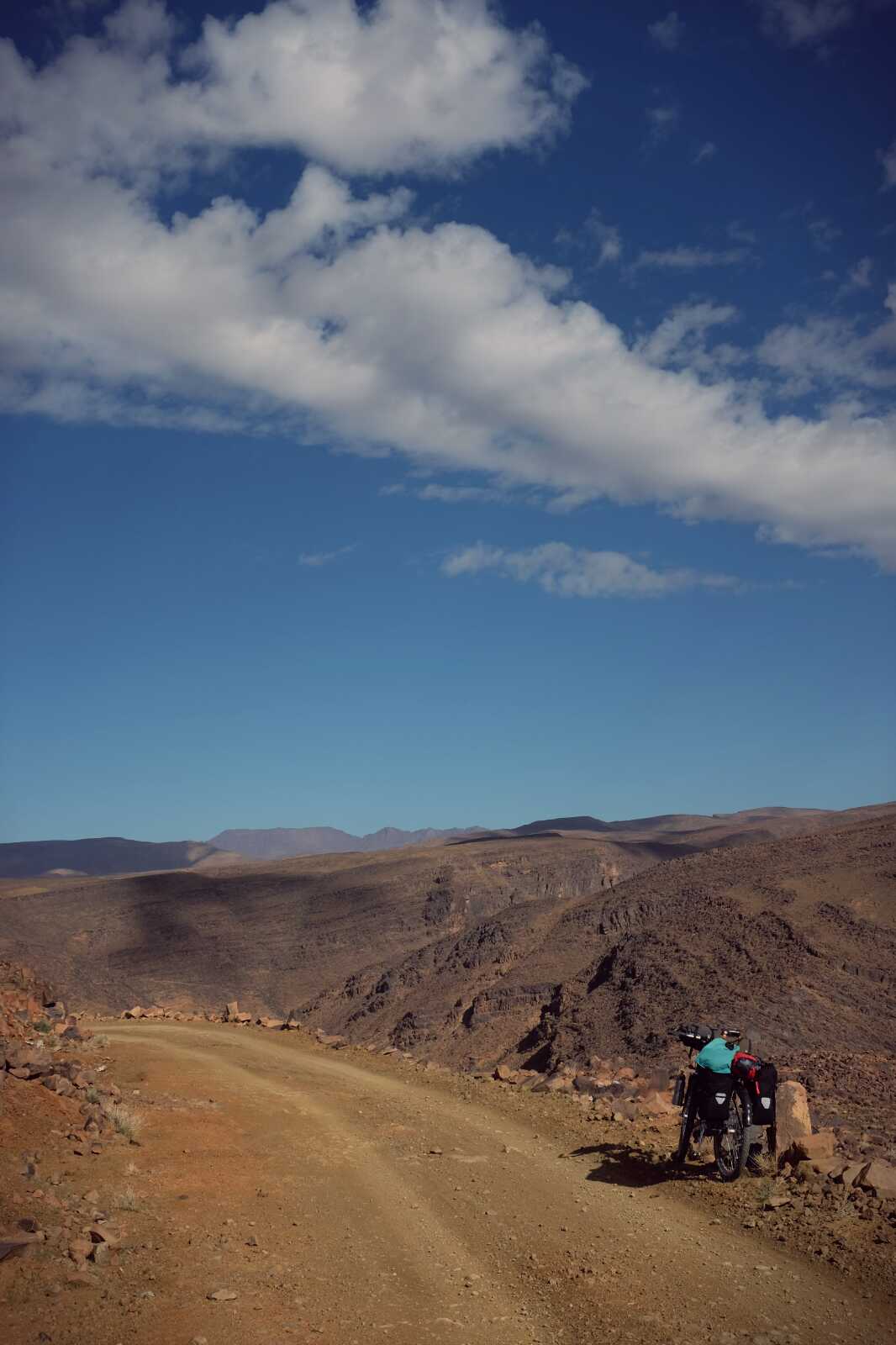 there is some early climbing on a good track.. 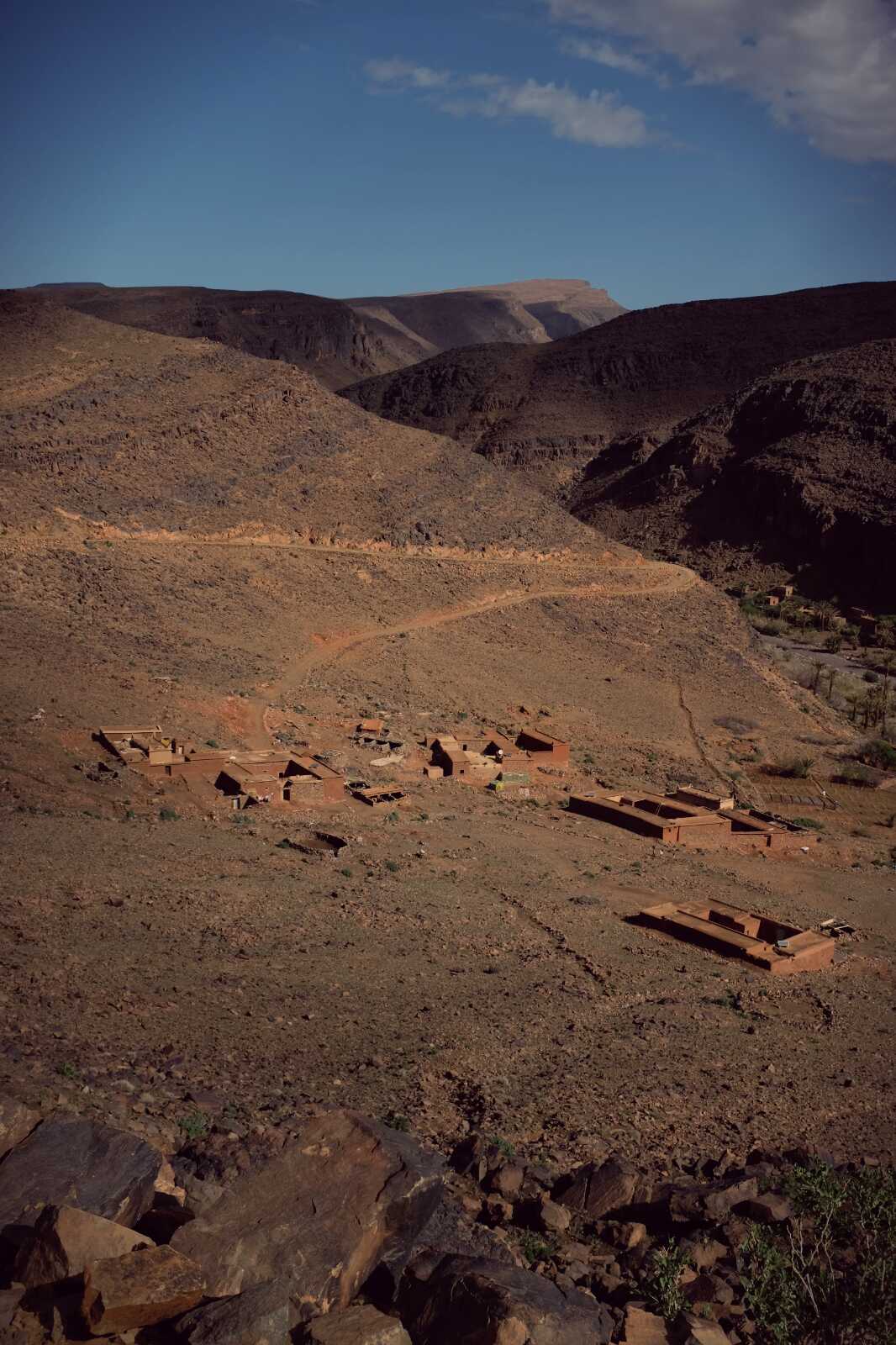 .. and some descending to a valley past a number of tiny villages. 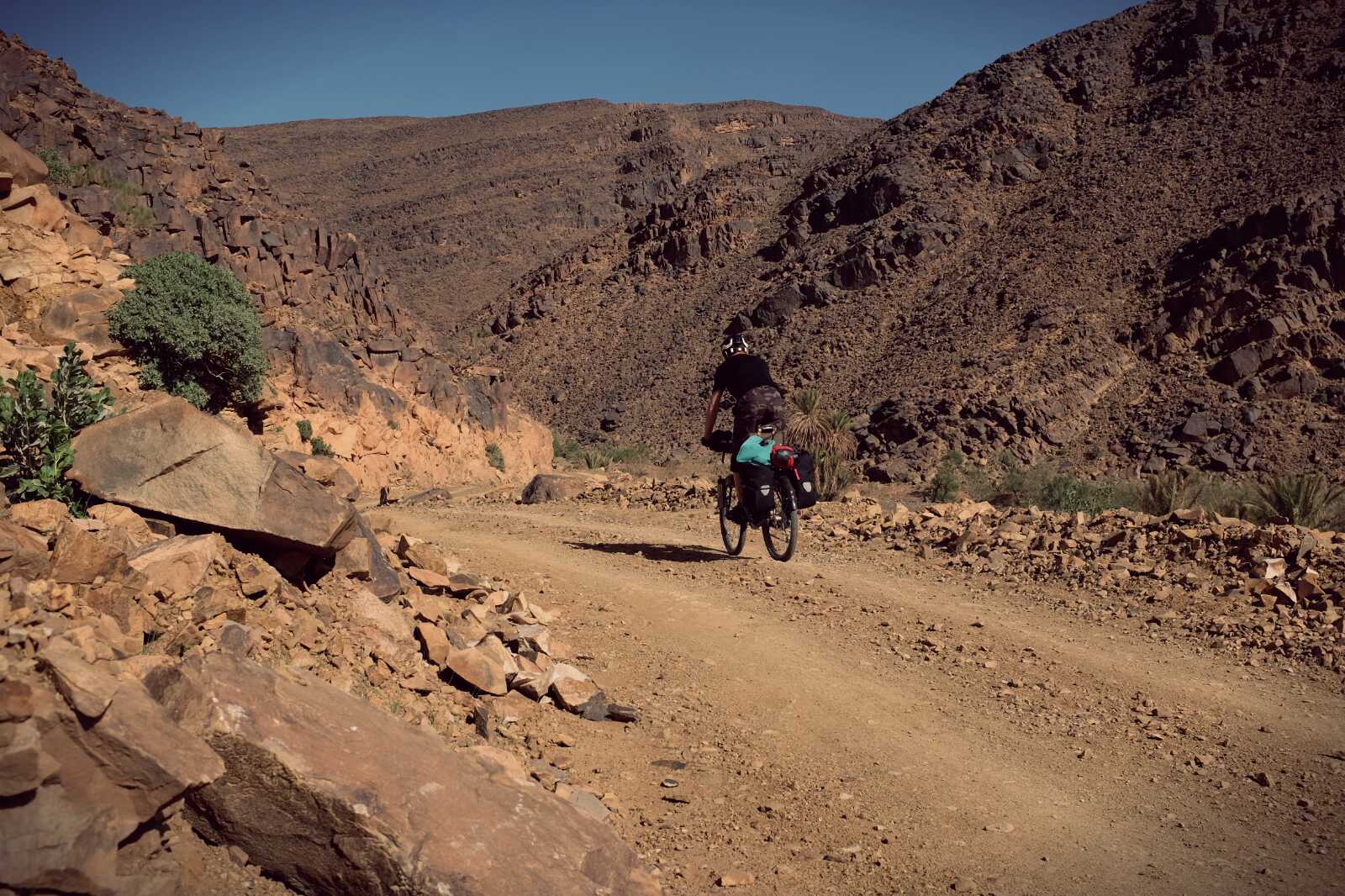 Taking it easy I even spent some time messing with putting my camera on a rock. It would be great to ride this route with somebody to give photos some context 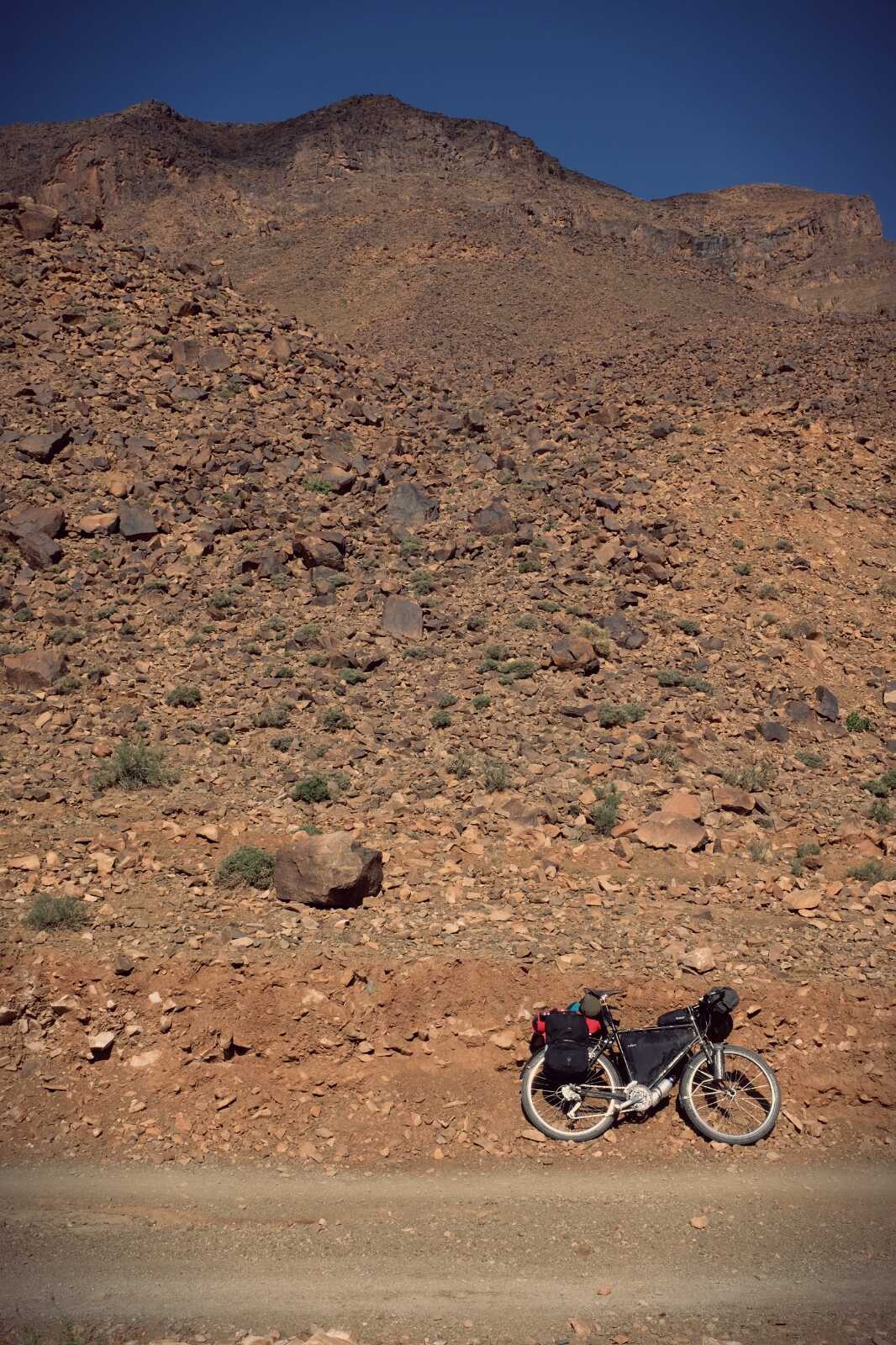 for a further 10km or so it’s an easy ride below red cliffs on a surface that varies from soft sand, to pebbles, to loose rocks. Good fun. 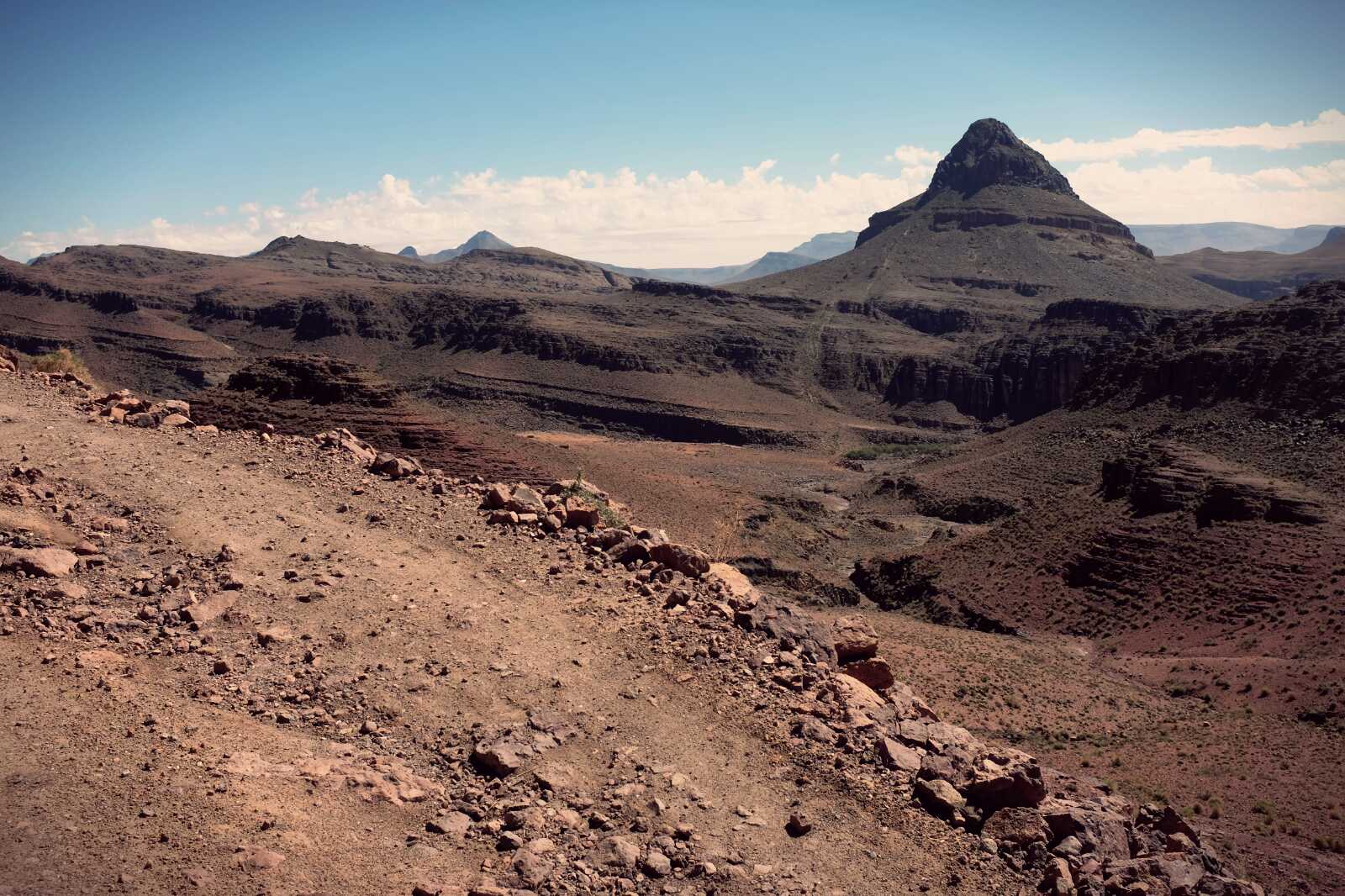 the climbing proper begins about 25km from N’kob. It’s a steep climb of about 15km to the pass on a very rough, rocky surface. I enjoy climbs like this, very engaging working to find a good line through the rocks and deep ruts. Beats asphalt any day. Apols for horrid midday light. 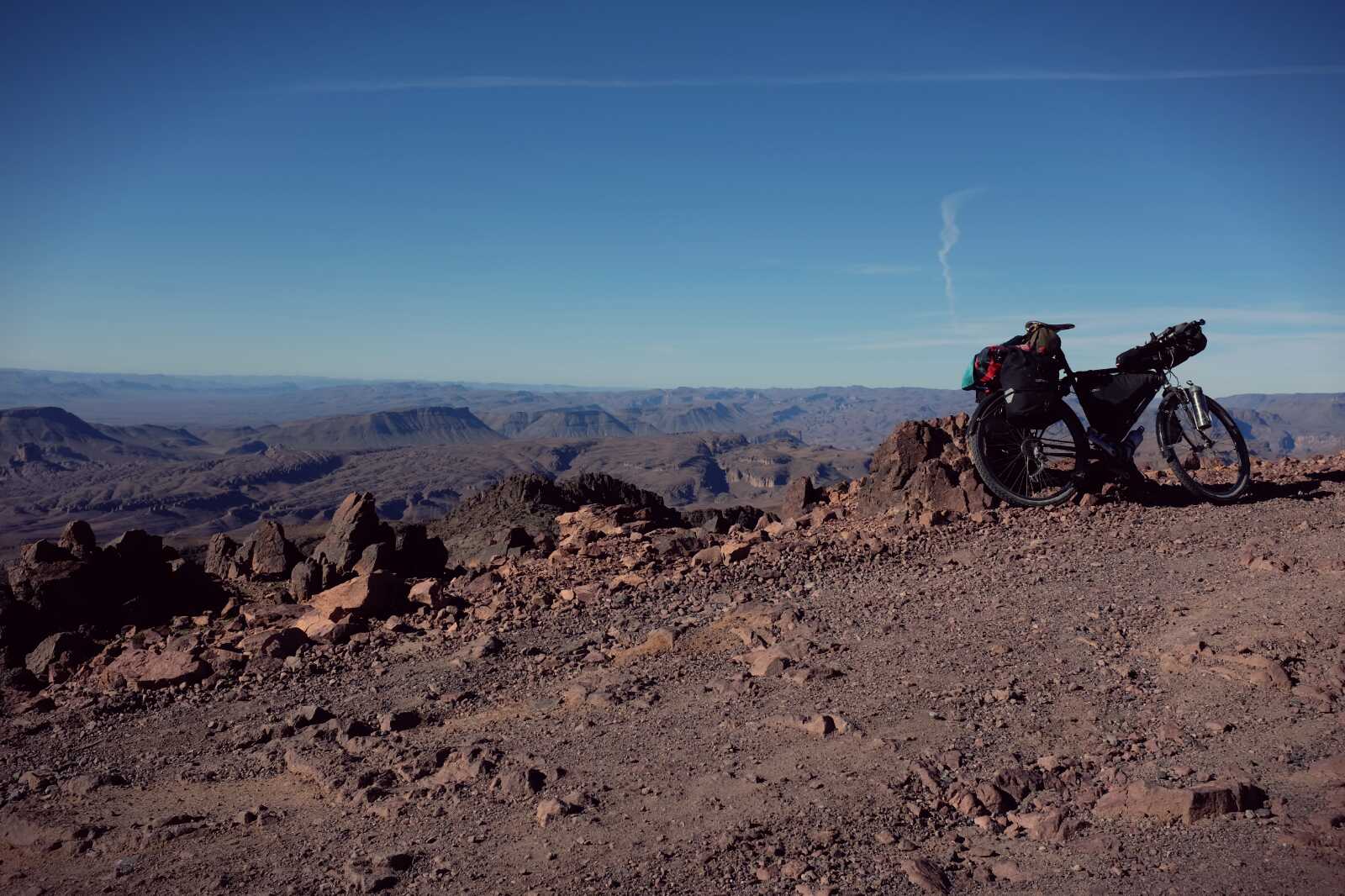 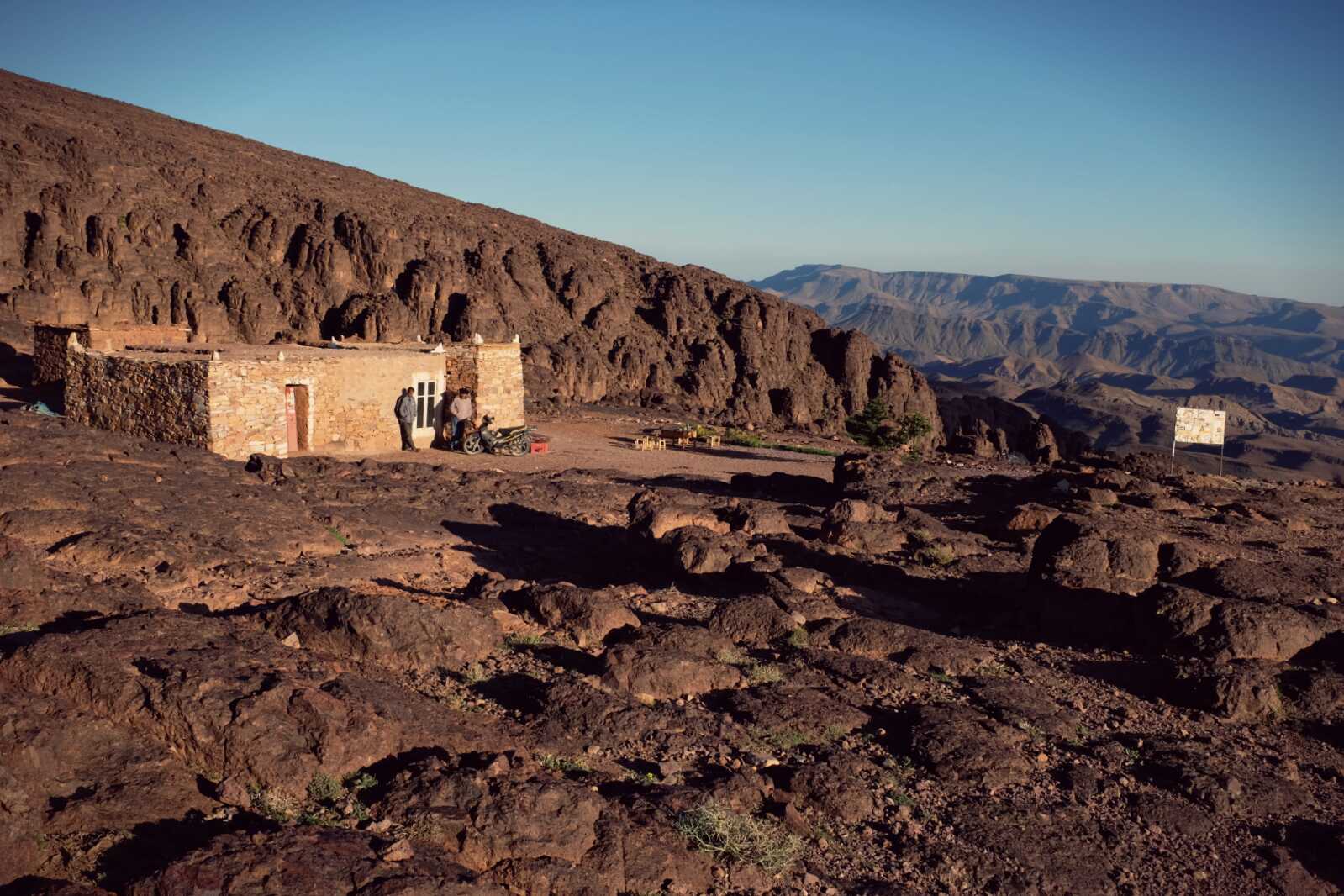 a couple of km below the summit, lost in the wilderness is the home of Ahmed and Fatima.. 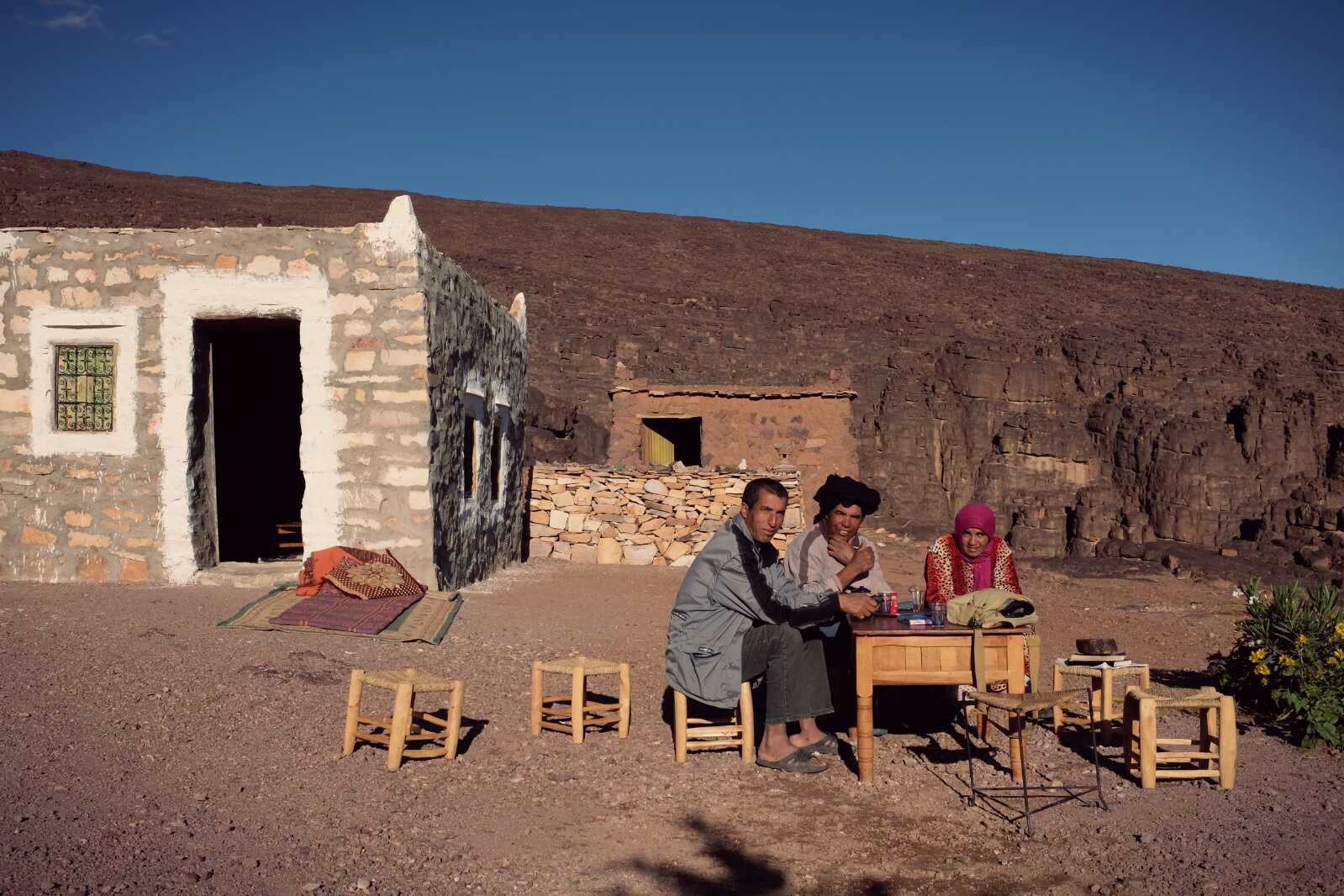 A wonderfully hospitable couple (that’s Ahmed’s brother on the left, just visiting) they make a living offering tea and simple meals to passing travellers. I arrived about 2pm I think feeling pretty tired so put my feet up with them for the afternoon. We drank tea of course, I emptied my bike of cake and biscuits… and dozed in the sun on some rugs that Ahmed dug out for me. Really life does not get better. 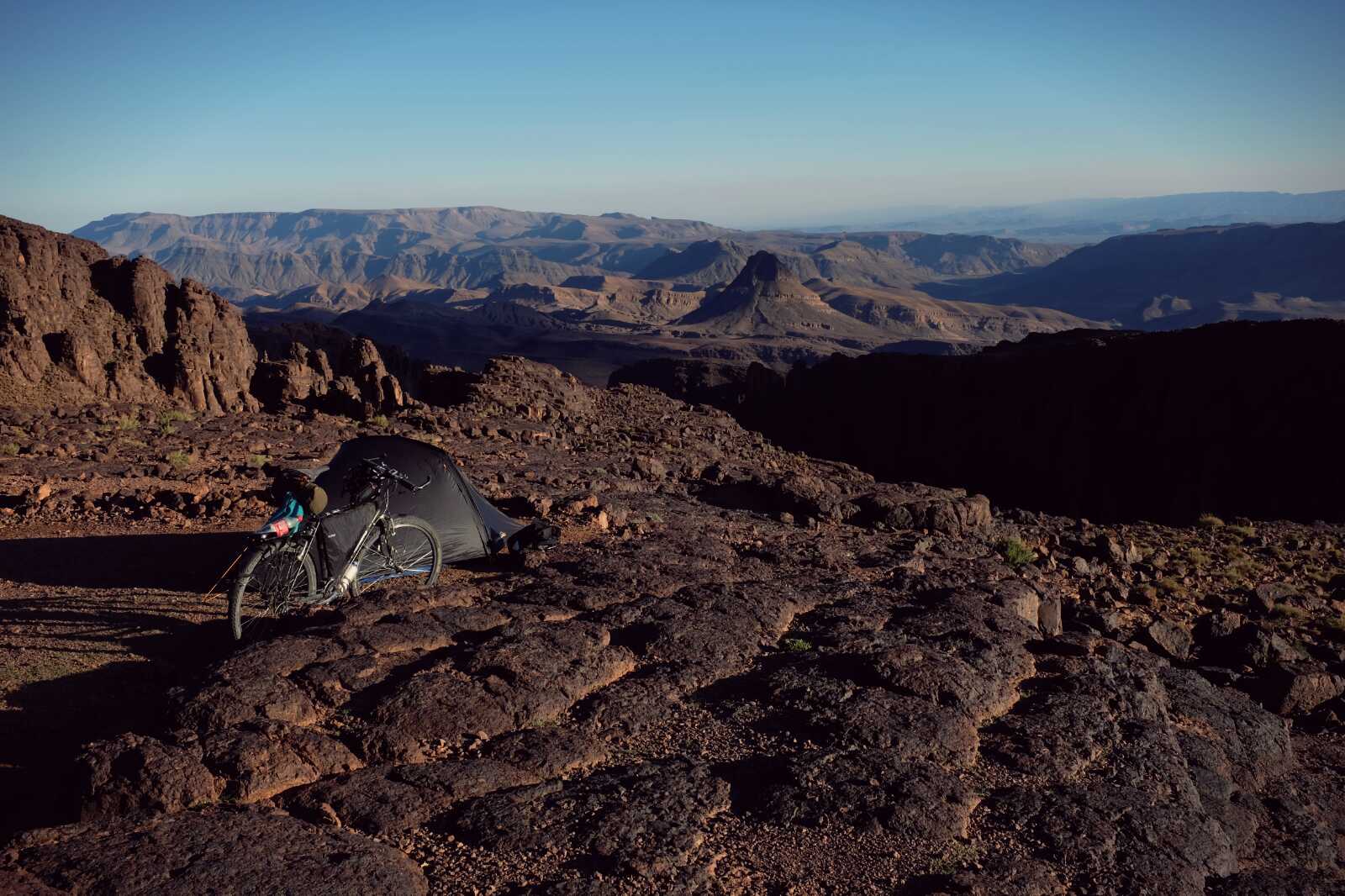 Shortly before the sun disappeared behind the peaks I put my tent on the cliff edge near their hut, 2100m up with a fabulous view to the south… before joining them for a simple dinner of couscous cooked with vine leaves under the stars. It was very cold. I enjoyed the cold :-) 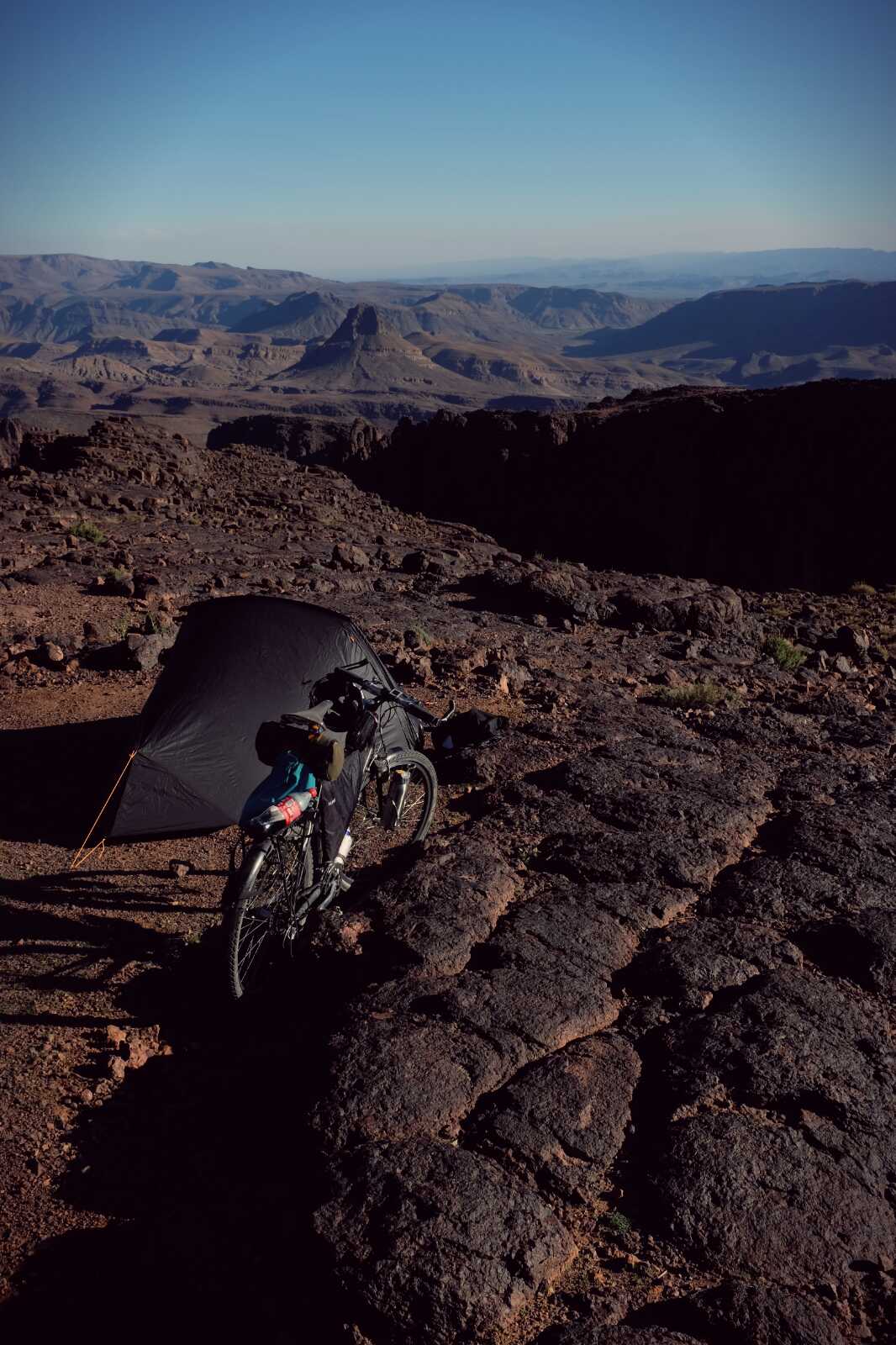 such a great spot, a campsite to remember 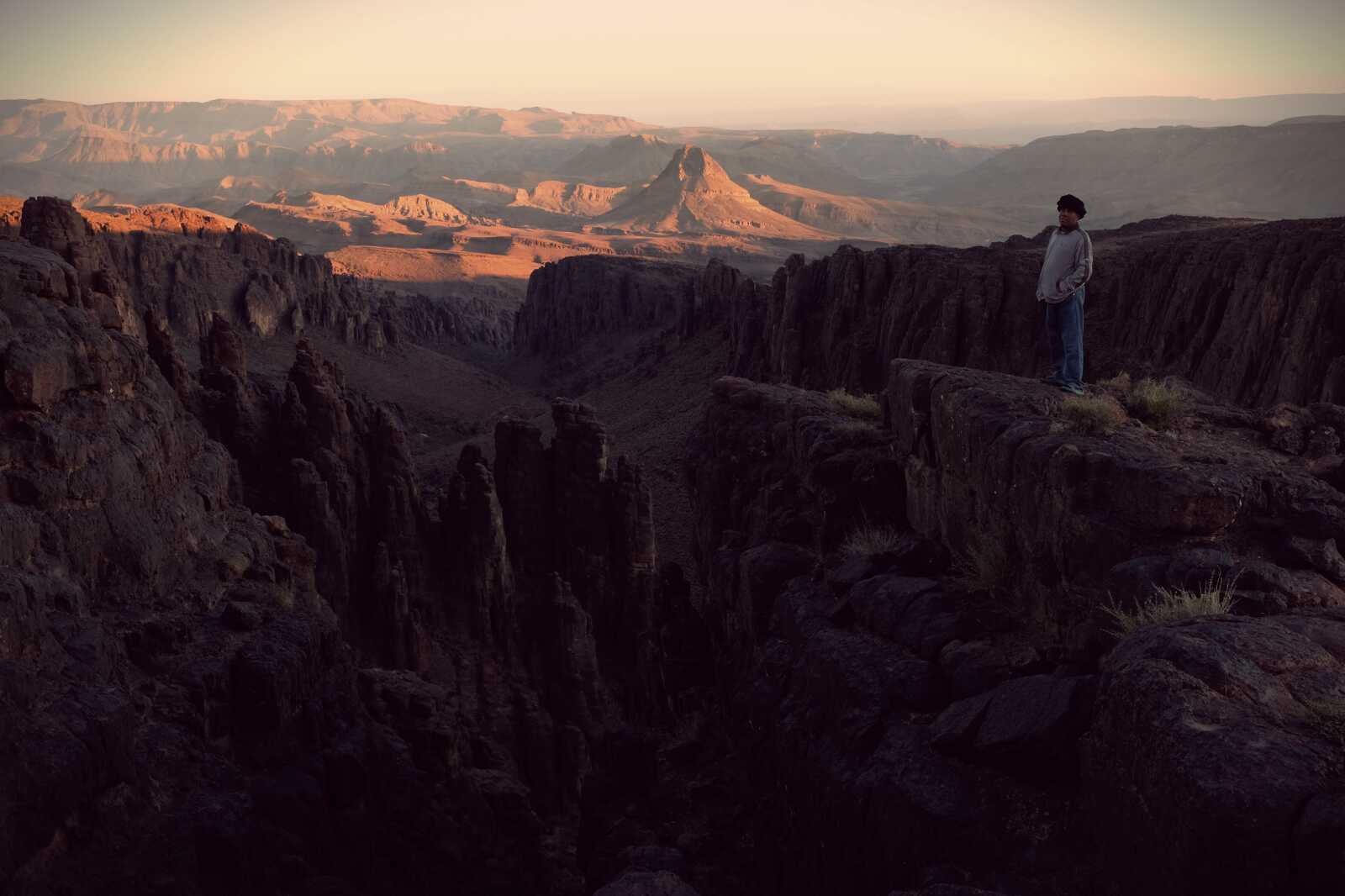 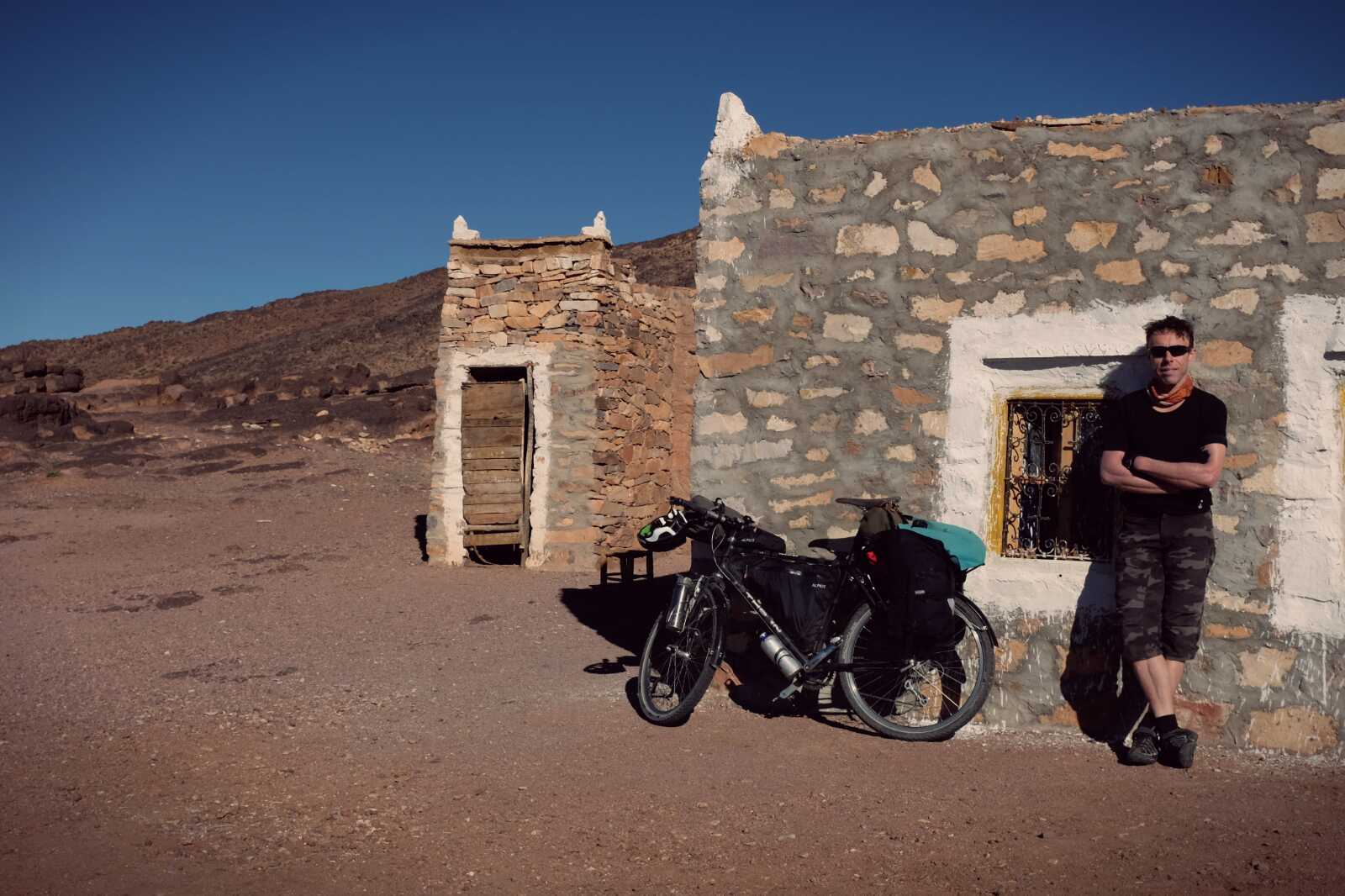 a rare pic of moi… I hacked my beard off in N’kob, with a sharpened flint of course… It was about 10am when I finally got going after some coffee, bread and jam. Ahmed had been very taken with my english-moroccan arabic dictionary/phrasebook so I left it with him. With only 8 days left here and being tired I’m too lazy to learn more… and I think he will find it far more useful as judging by his prized notebooks european folk find their way past his door by bicycle, foot and motorbike reasonably regularly. 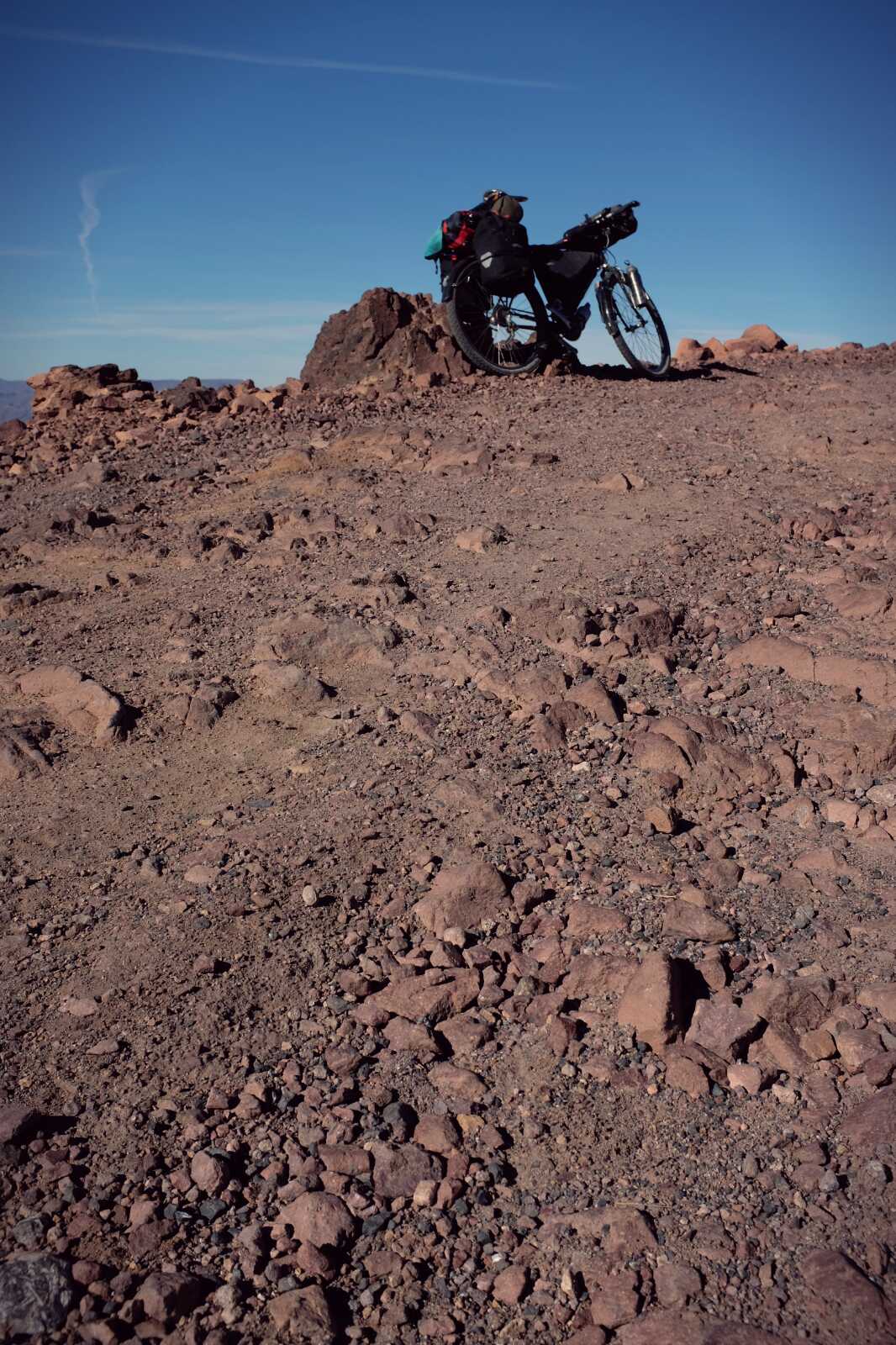 climbing once again, but only a few km to the pass 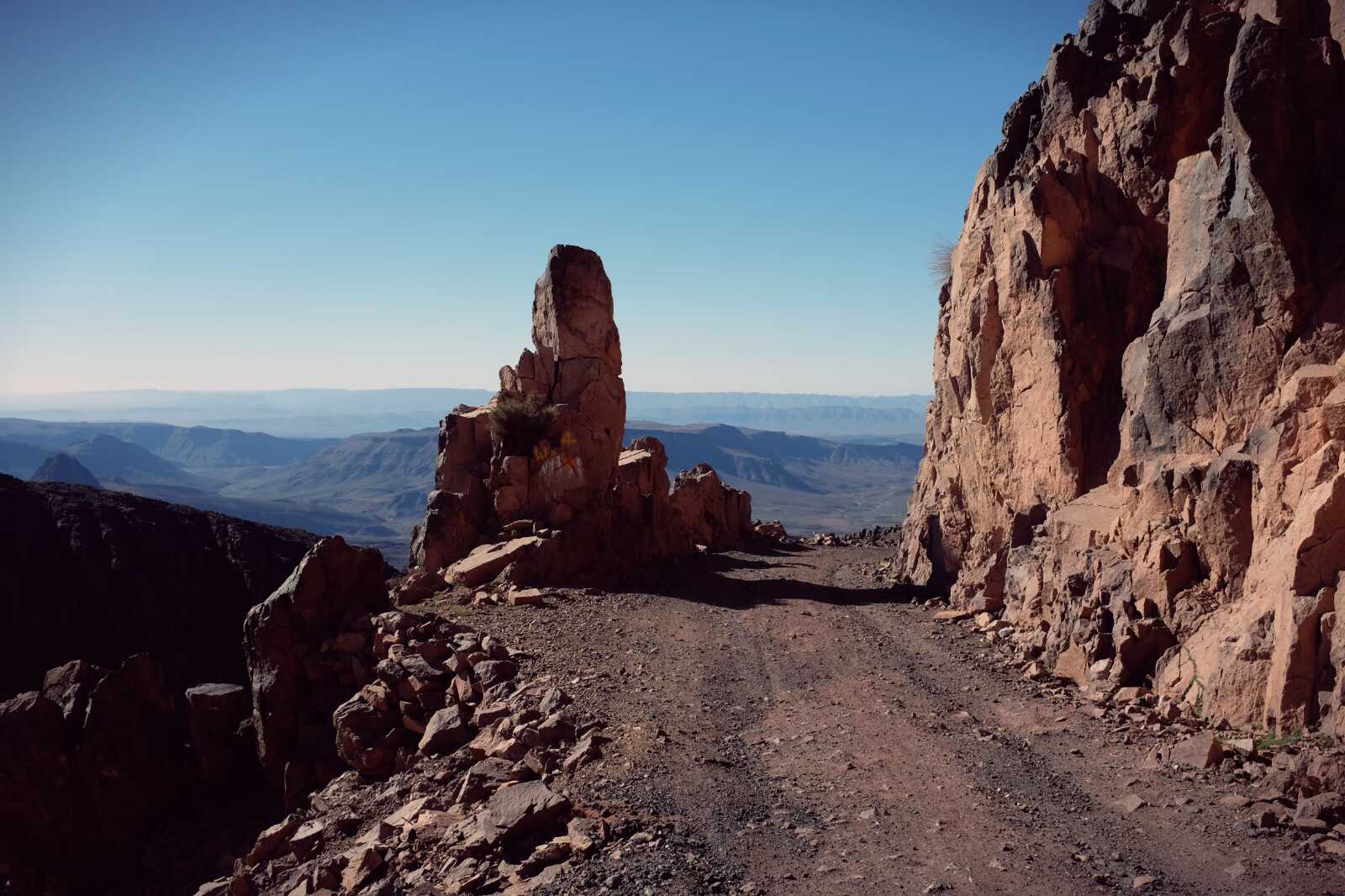 quite an achievement blasting this road through 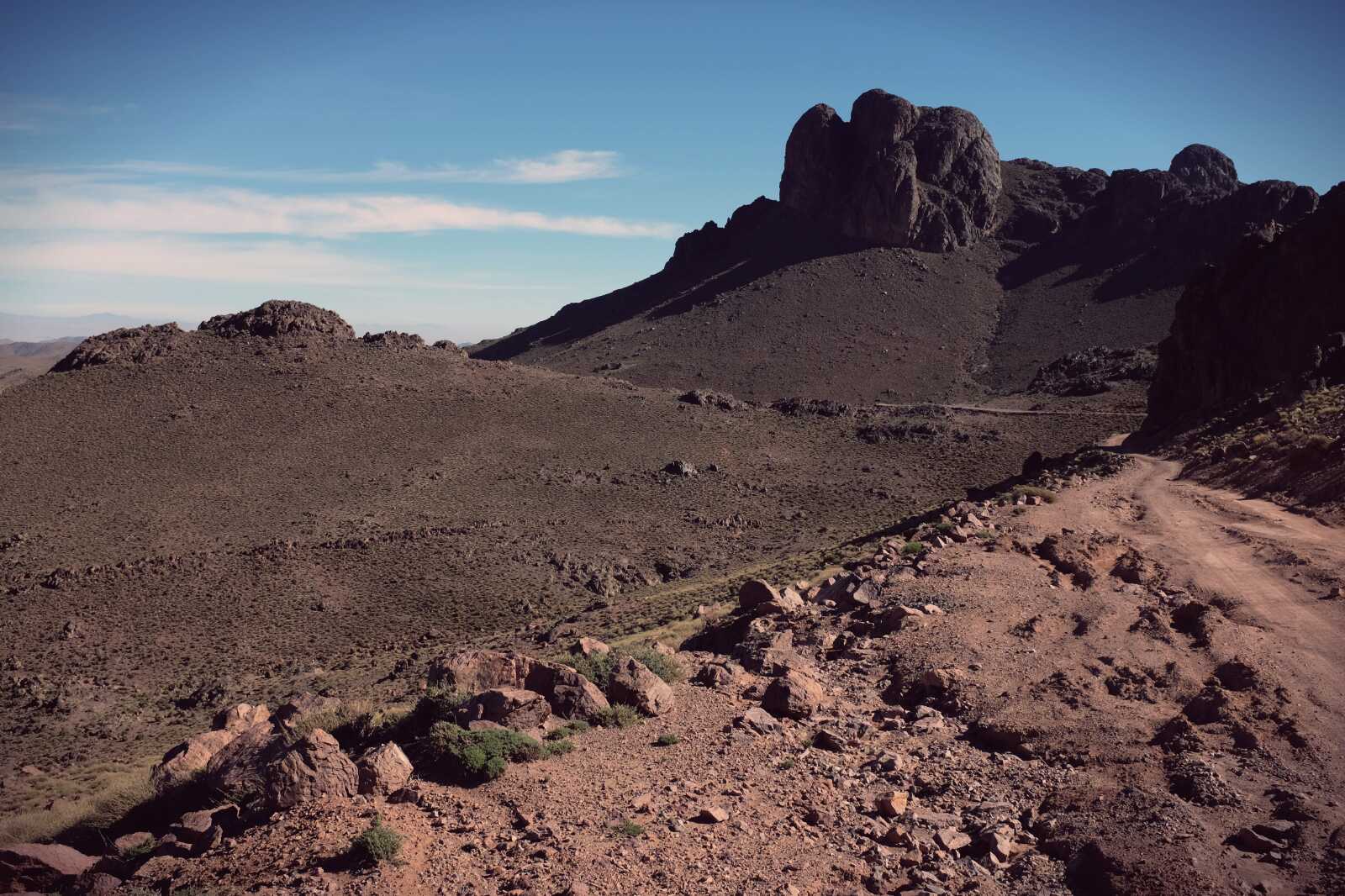 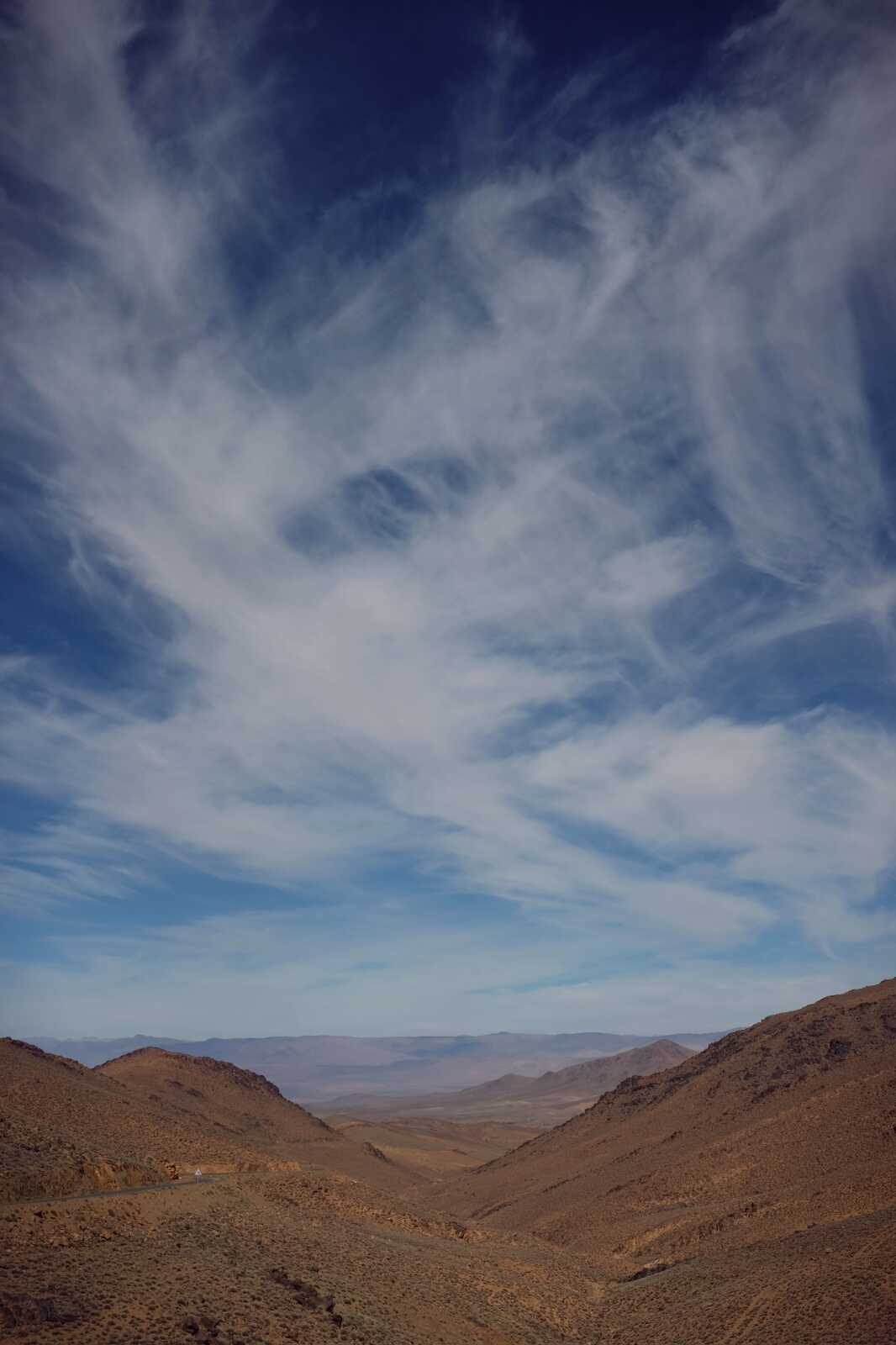 until joining with an asphalt road after about 10km, with booming great views north to the High Atlas… 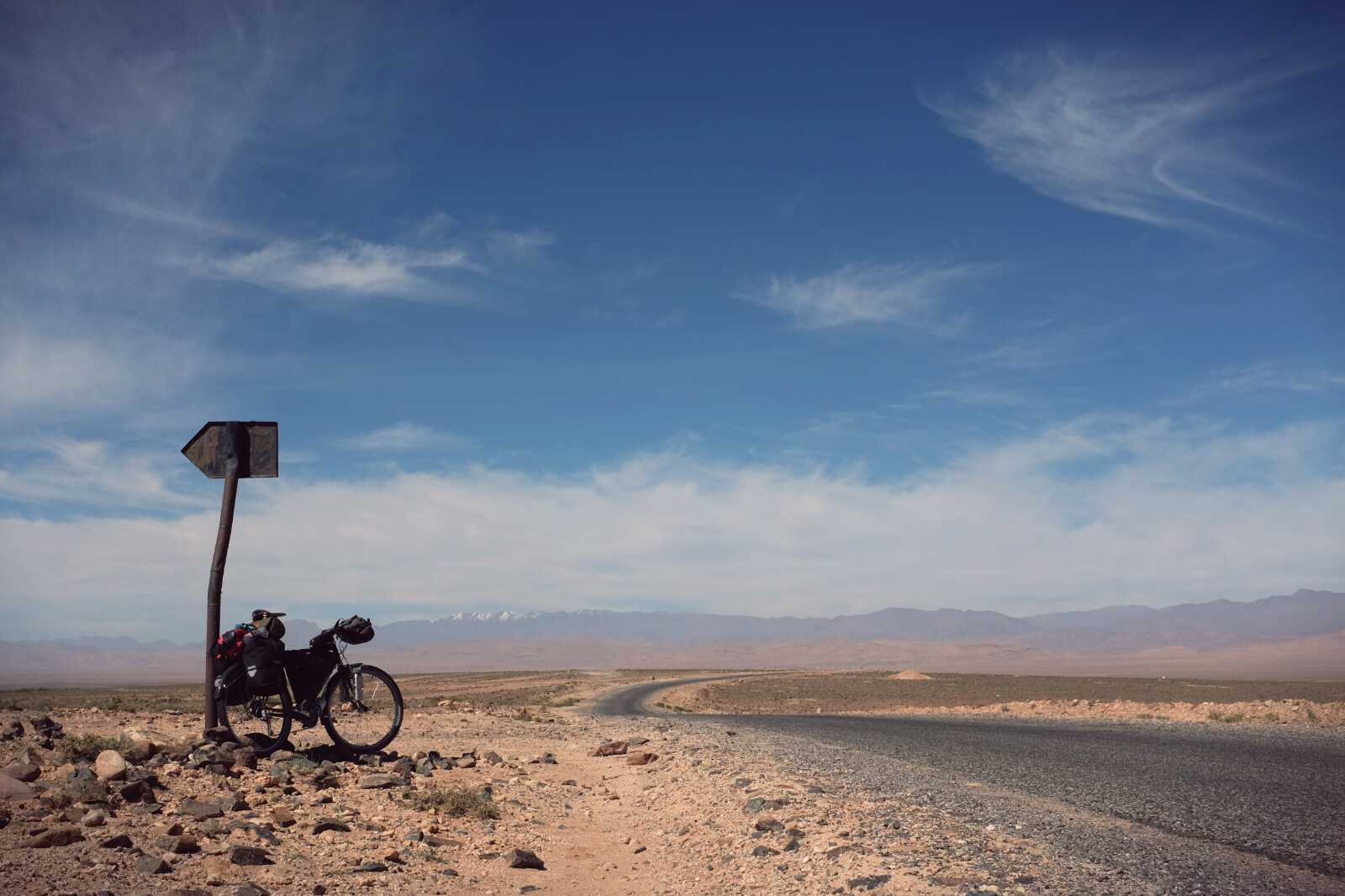 … which ultimately spits you out on the plain separating the Jebel Sahro from the High Atlas. You can just see the early snows on the peaks of the Atlas.

There. It is only 101km from N’Kob to Boumalne but a really rather good 101km. Now, if you’ll excuse me I’m feeling somewhat knackered…. ’till next time :-)

4 thoughts on “via Tizi n’Tazazert…”