Fear, I think, is one of the greatest obstacles to doing ‘stuff’ in life; fear of what might happen, or what people might think for example, whether it’s changing jobs, trying something new, or disappearing off for a bike ride “somewhere else”…. There has always been a little bit of fear in me before heading off on a bicycle to remote, high places for weeks, or months at a home. I don’t think it would be normal to not feel that. I’ve always been able to rationalise it away  however, and in this context ‘rationalise’ usually just means an “it’ll probably be fine” shrug of the shoulders and simply slinging a leg over my bike; the fear always evaporates with the first pedal stroke. I should probably note at this point that an understanding of the risks is always present so I’m never reckless. Two years ago in Peru I would not have expected pneumonia, mild as it was, to have had the long lasting impact that it did. Before Christmas last year I thought it was behind me at last so booked a flight back to the Andes… and then in January I caught bronchitis. I’m still dealing with the consequences in the form of a persistent chesty cough and aggravated asthma five months later.

Consequently for the last couple of months the annoying little voice that says “what if things aren’t alright this time” has been gnawing at me, and it bothers me that it’s happening, and I fear that if I do not nip it in the bud it could become somewhat paralysing. That second fear is the stronger, and finding myself unable to accept that my ‘high altitude career’ as such is over, then it seems the only thing to do is face the fear, again, and keep my fingers crossed. My chest has been slowly improving over the last few weeks so I’m hopeful that with perhaps a gentler start to a journey than I’m used to.. well, what passes for gentle in the Peruvian Andes that I might be OK, especially with a bag of inhalers in my luggage a’la Chris Froome… With that in mind then this past weekend was a perfect opportunity for a gear shakedown, so I grabbed a two-wheeled mate and headed up to Dartmoor for  couple of days.

I’d plotted a route of about 120km that essentially did an anti-clockwise lap of the moor in a particularly wandering fashion. It’s not always possible to know what it is rideable and what is not from a map, so we were treated to a terrific upper body workout too as loaded bikes were hiked and carried an additional few km over boulders and through particularly steep scrub. It was good fun. 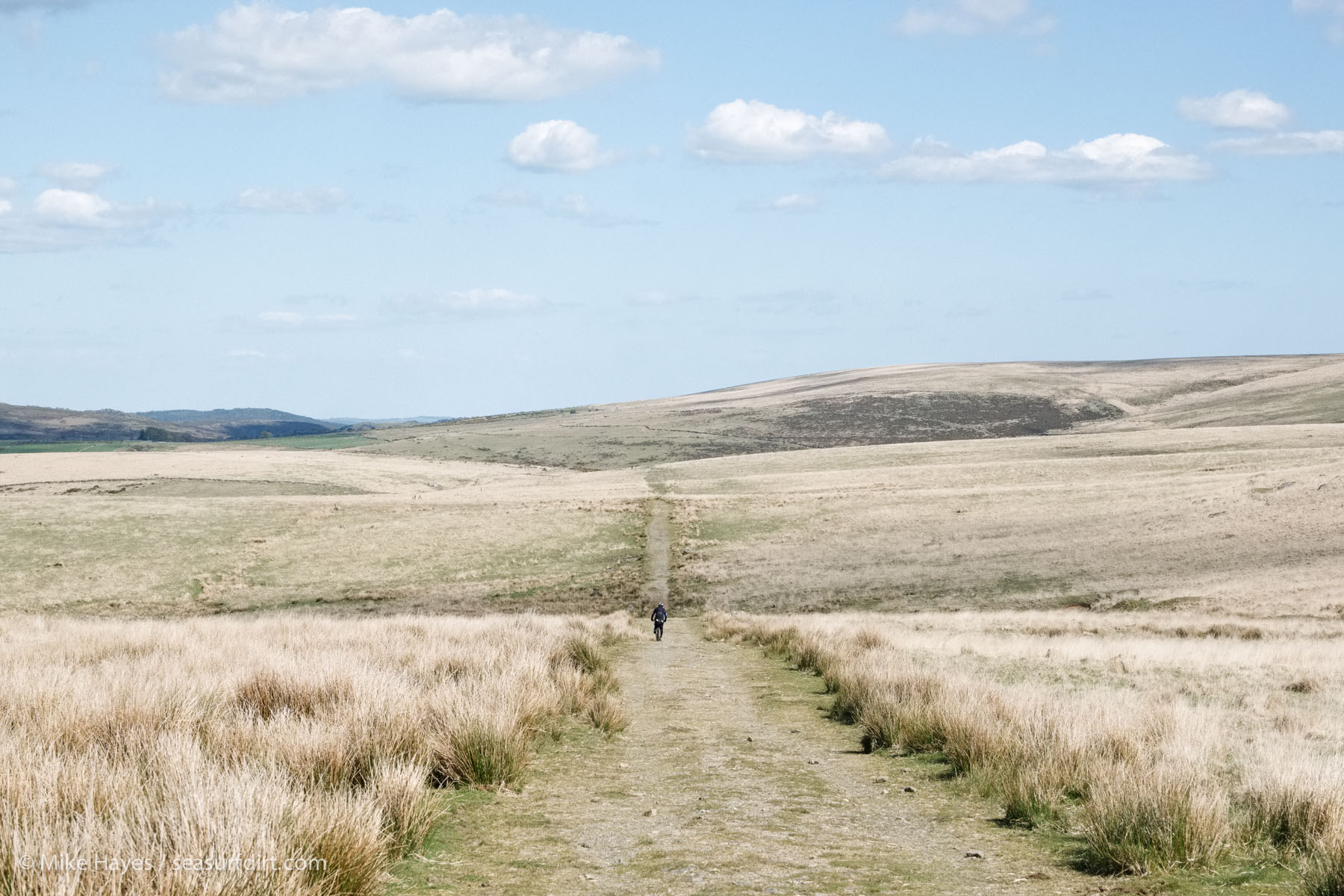 We lucked out with a fabulous weather forecast. An Arctic-maritime airstream brought skies of wonderful clarity and a strong north-westerly wind. 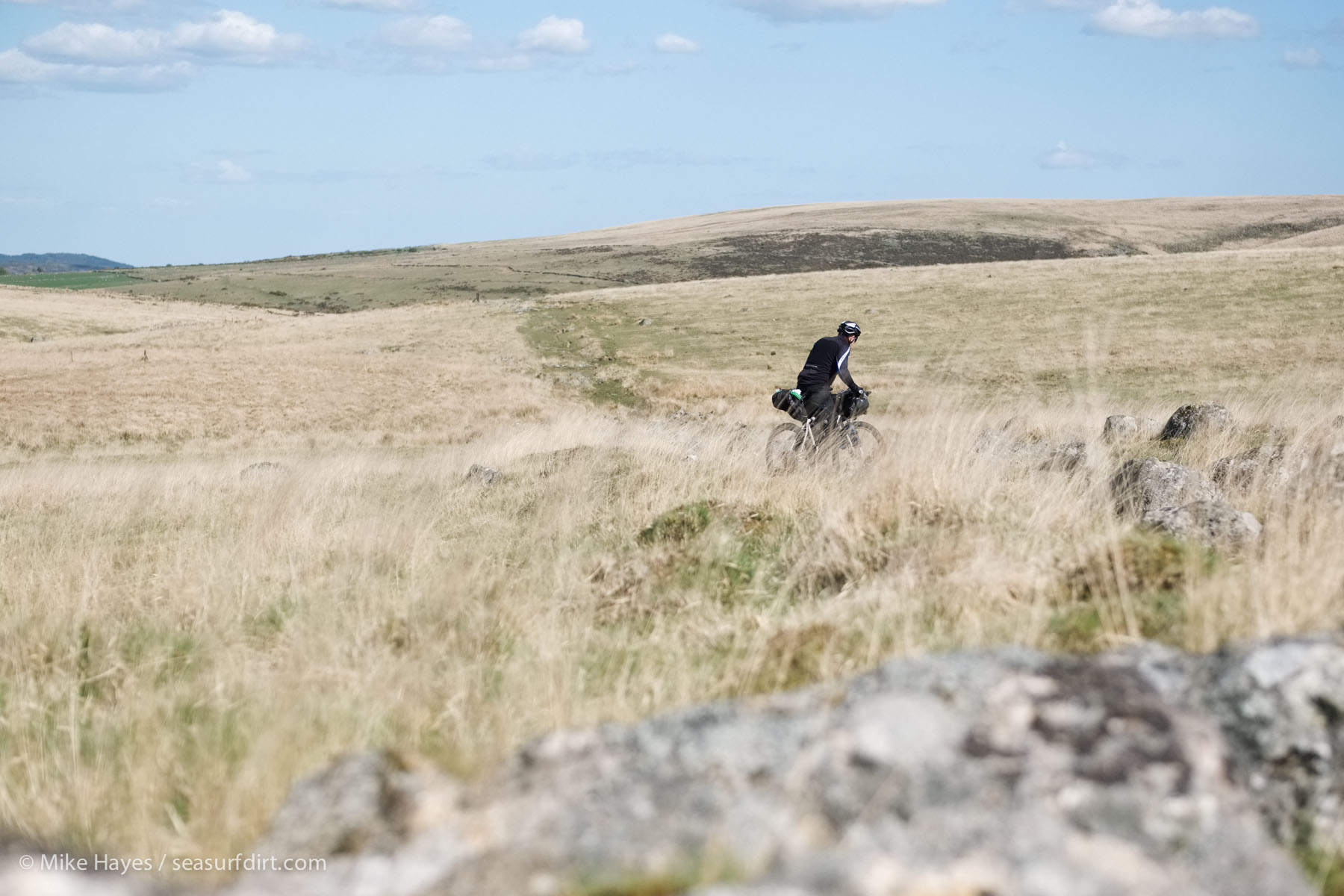 The windswept moor-tops are terrific. Trails are a mix of fast, stony tracks, ‘heavy’ sections of bog, and in some cases just a series of large boulders. It is never boring. 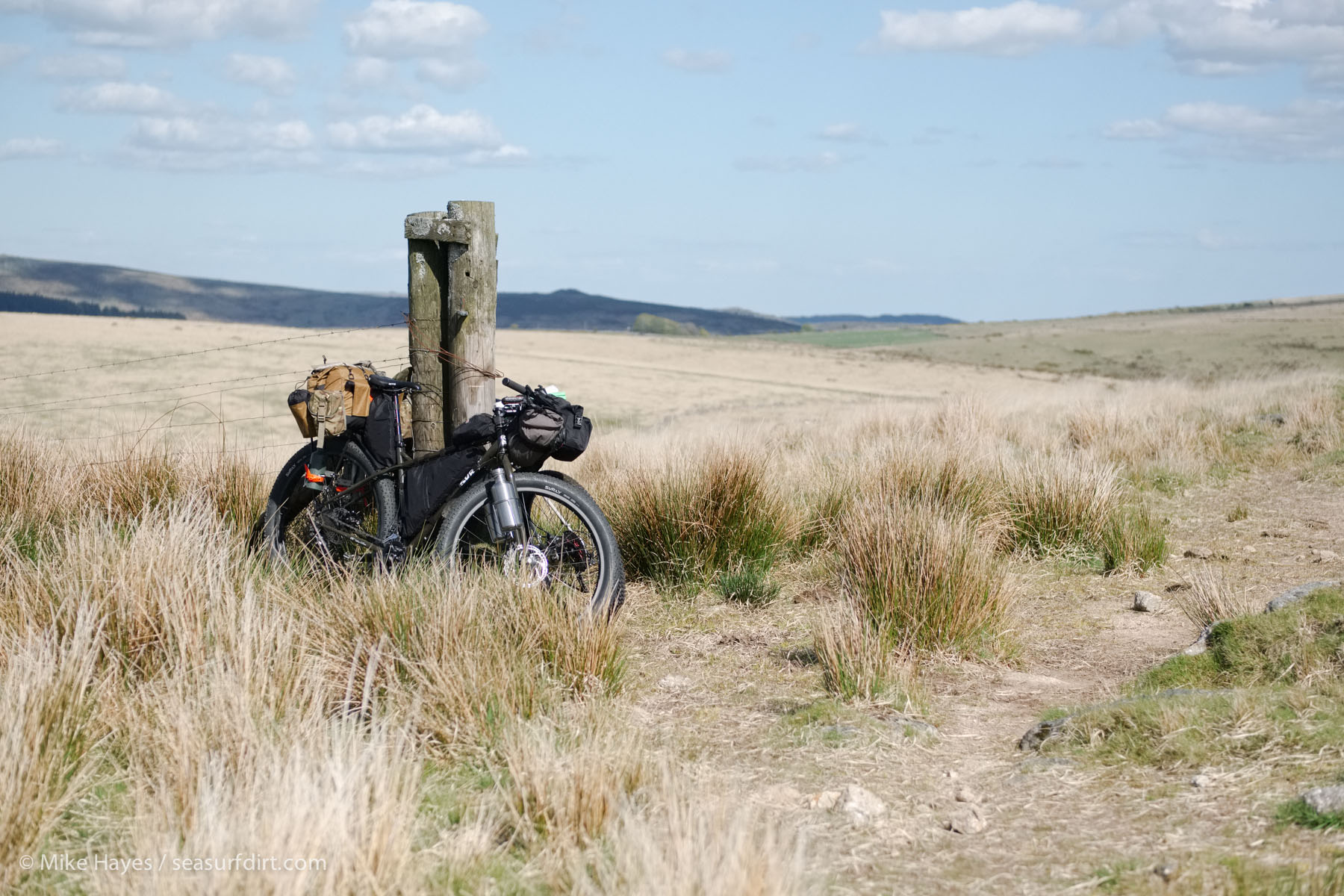 A “bike parked against a lonely fence post” picture is near obligatory in such locations. 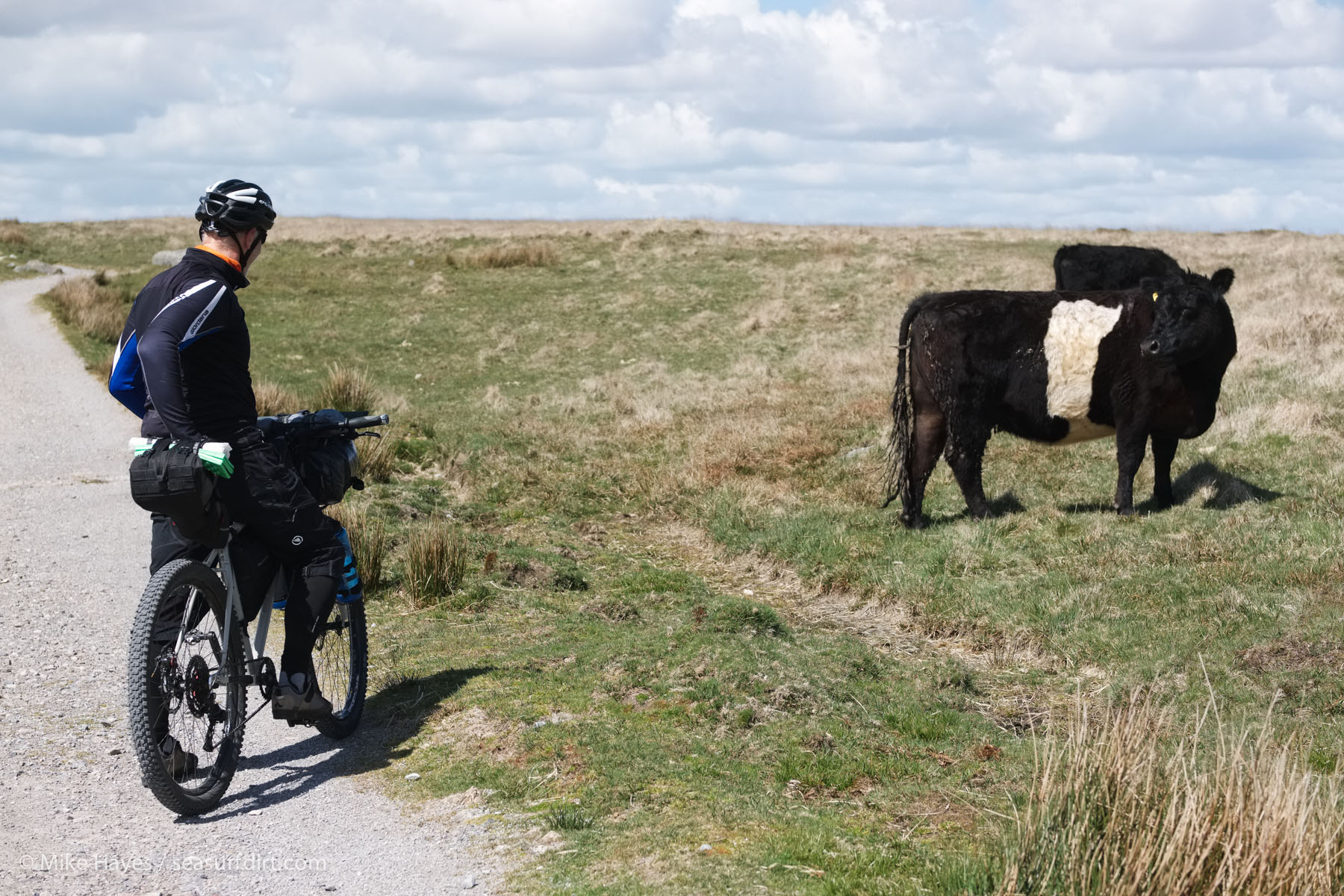 It turns out that the moor is home to a number of ‘galloway pandas’.. Belted Galloways are all over the place really, even here in west Cornwall, but I’d never paid them much attention until I went riding with friends… in Galloway.. 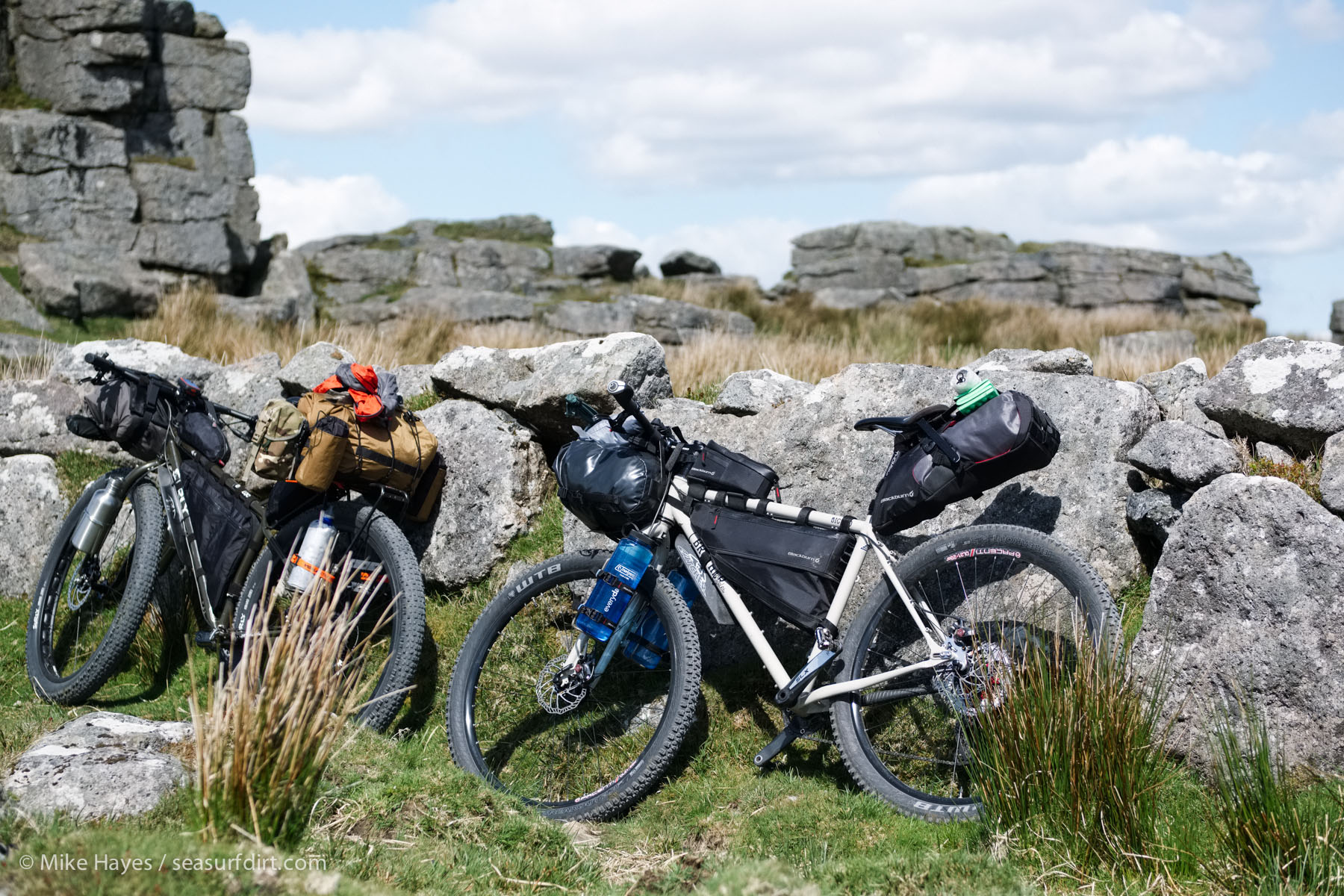 The granite tors are Dartmoor’s signature.. 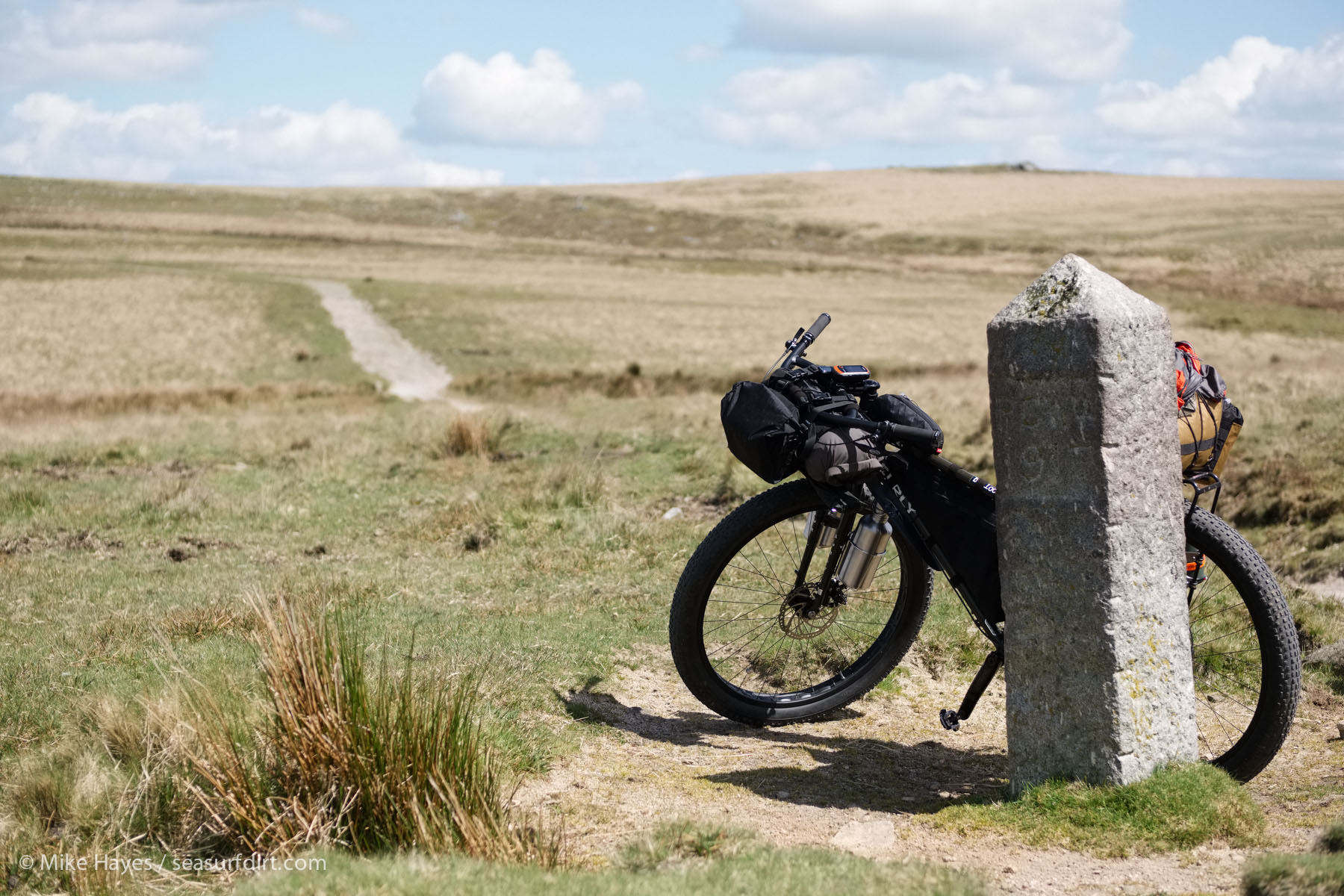 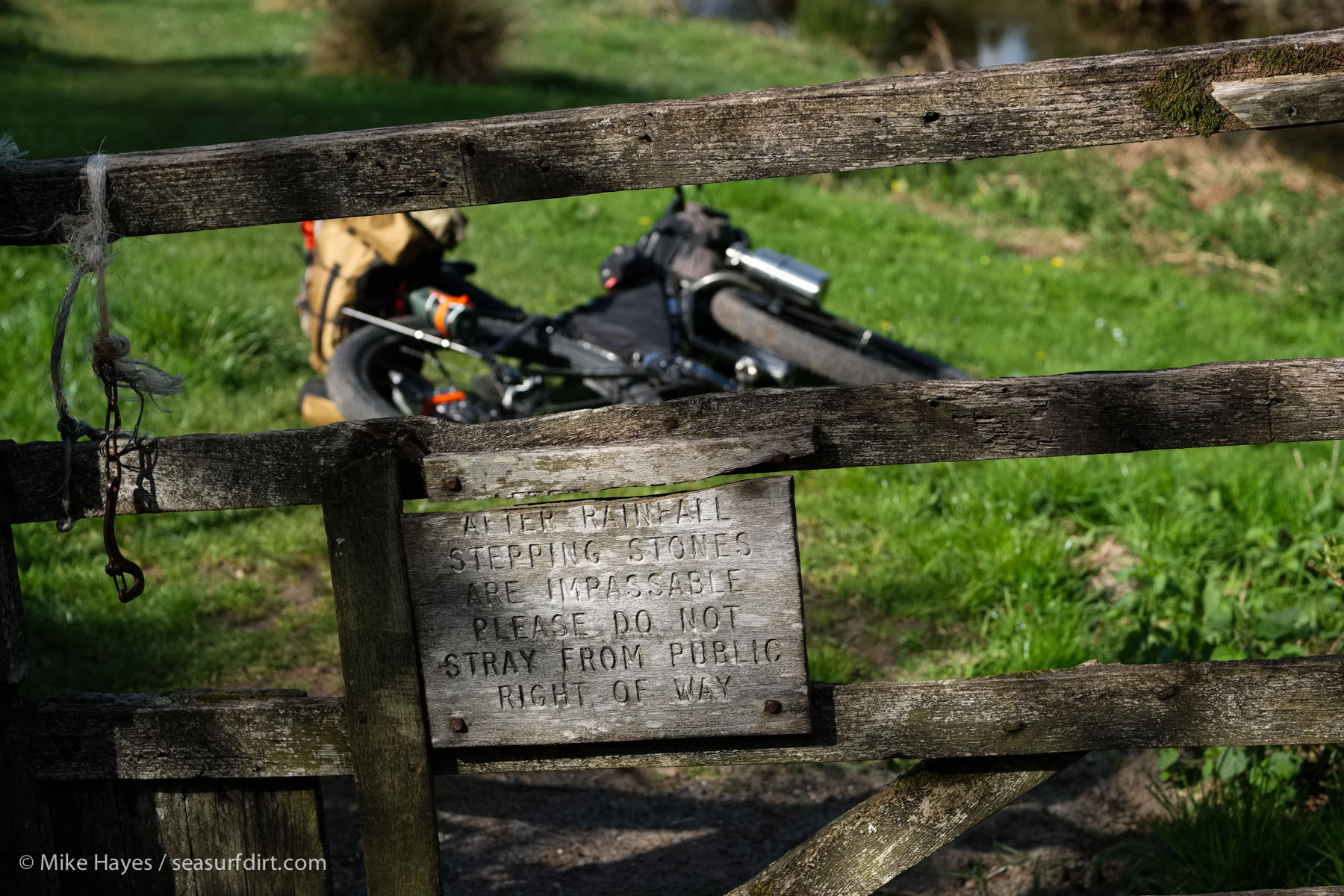 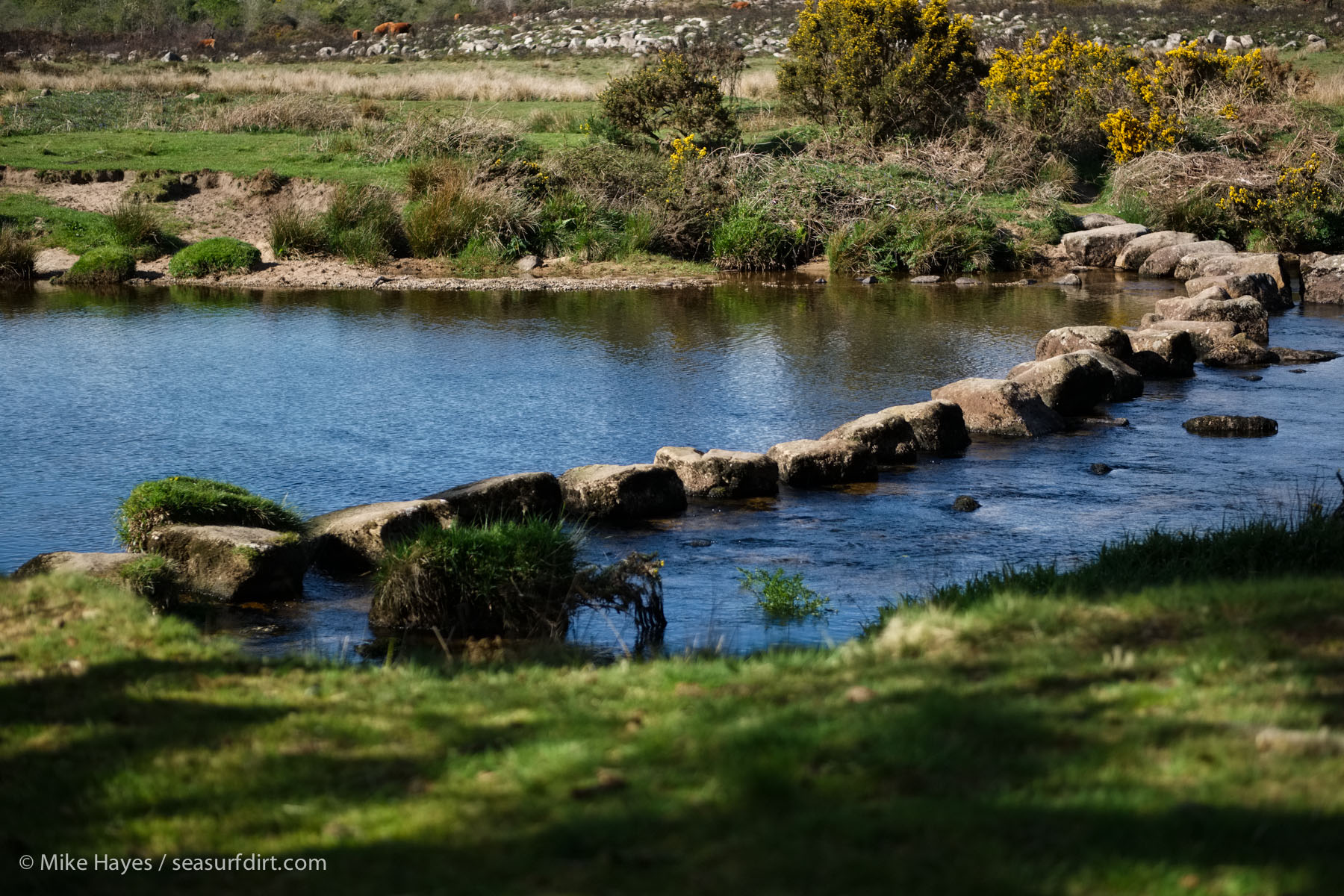 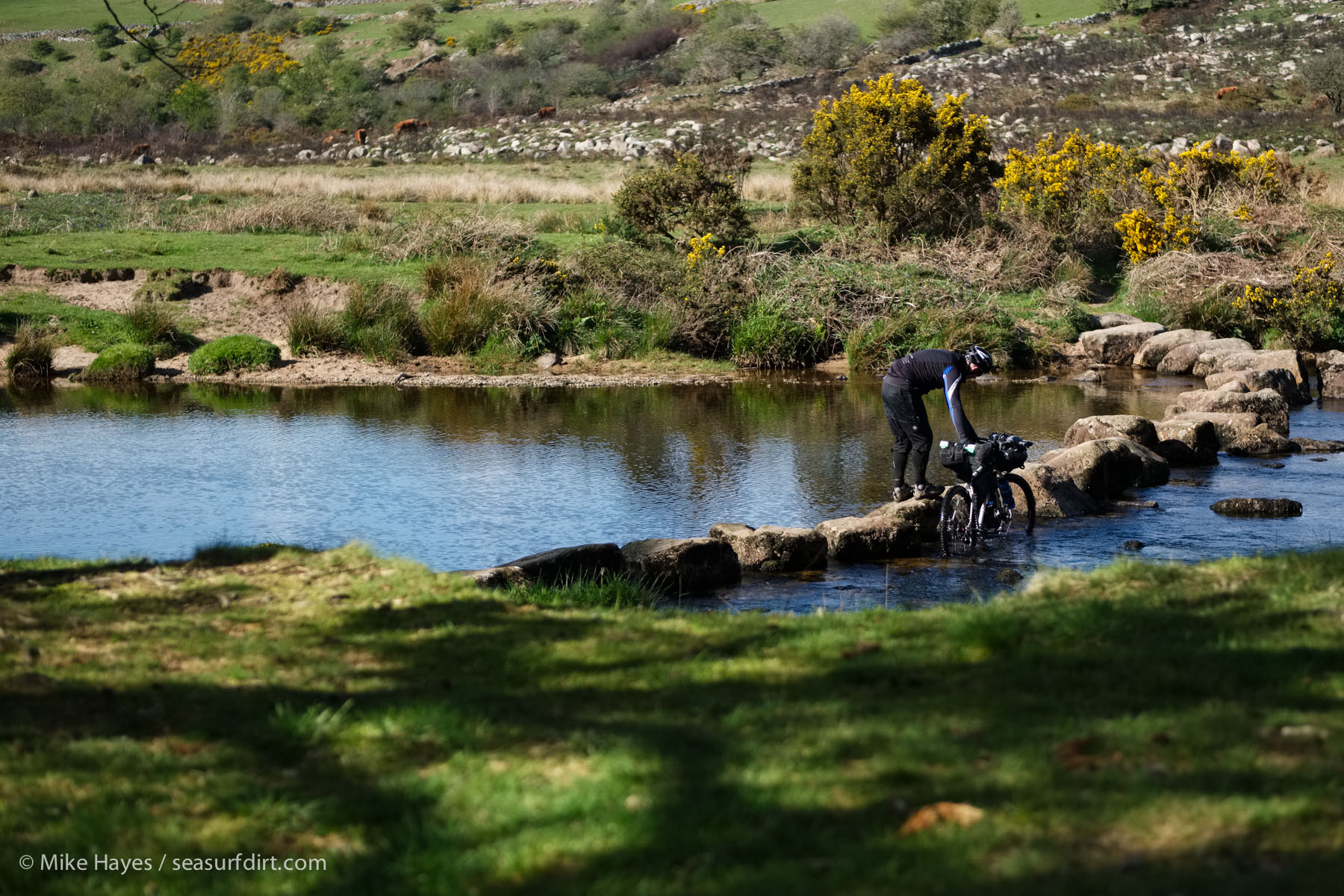 The water was not deep but covered large, slippery boulders, so with loaded bicycles the safest means of crossing was an awkward pushing, lifting sort of a thing.. not elegant or impressive but useful for avoiding broken bones. 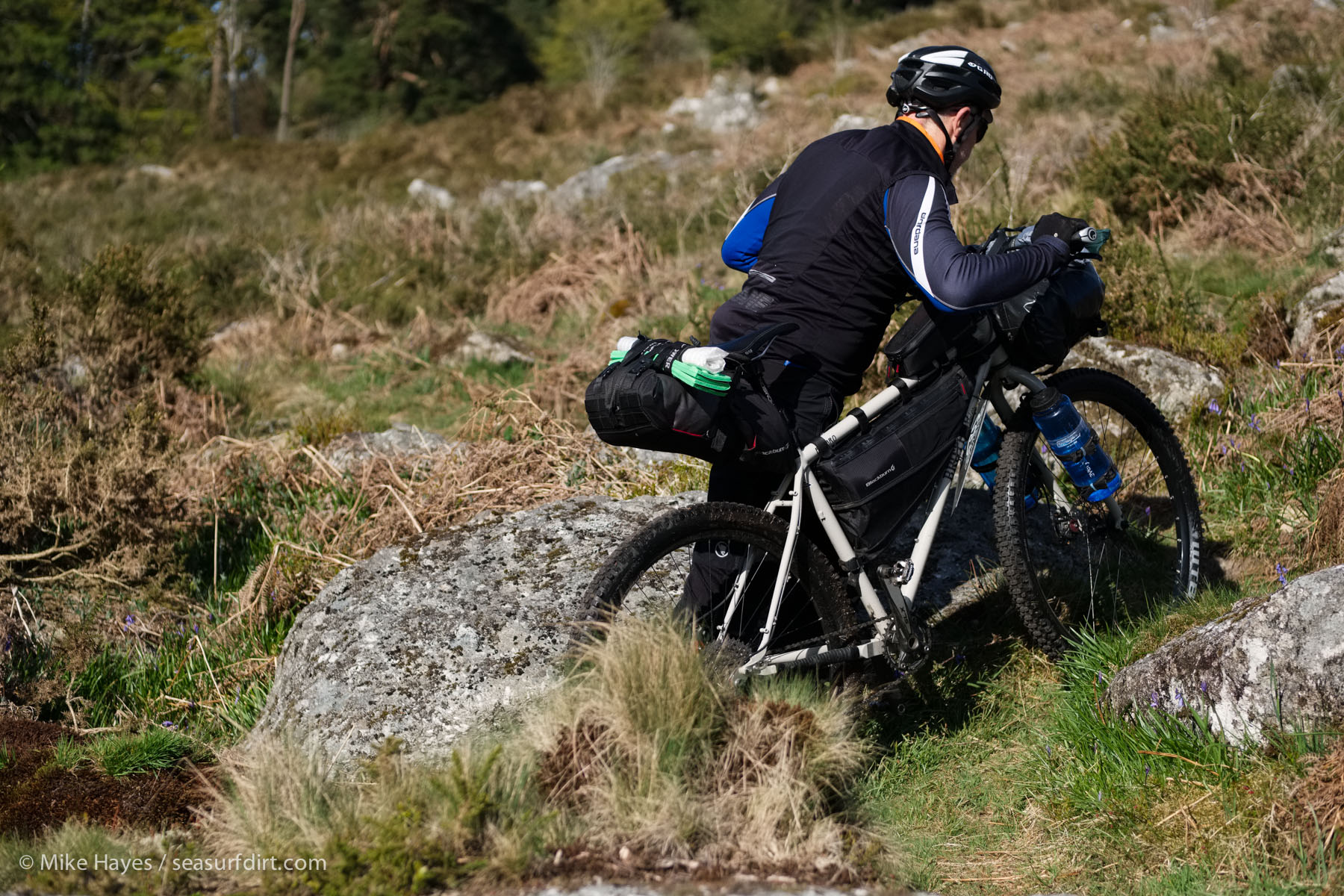 pushy bit… one of many. 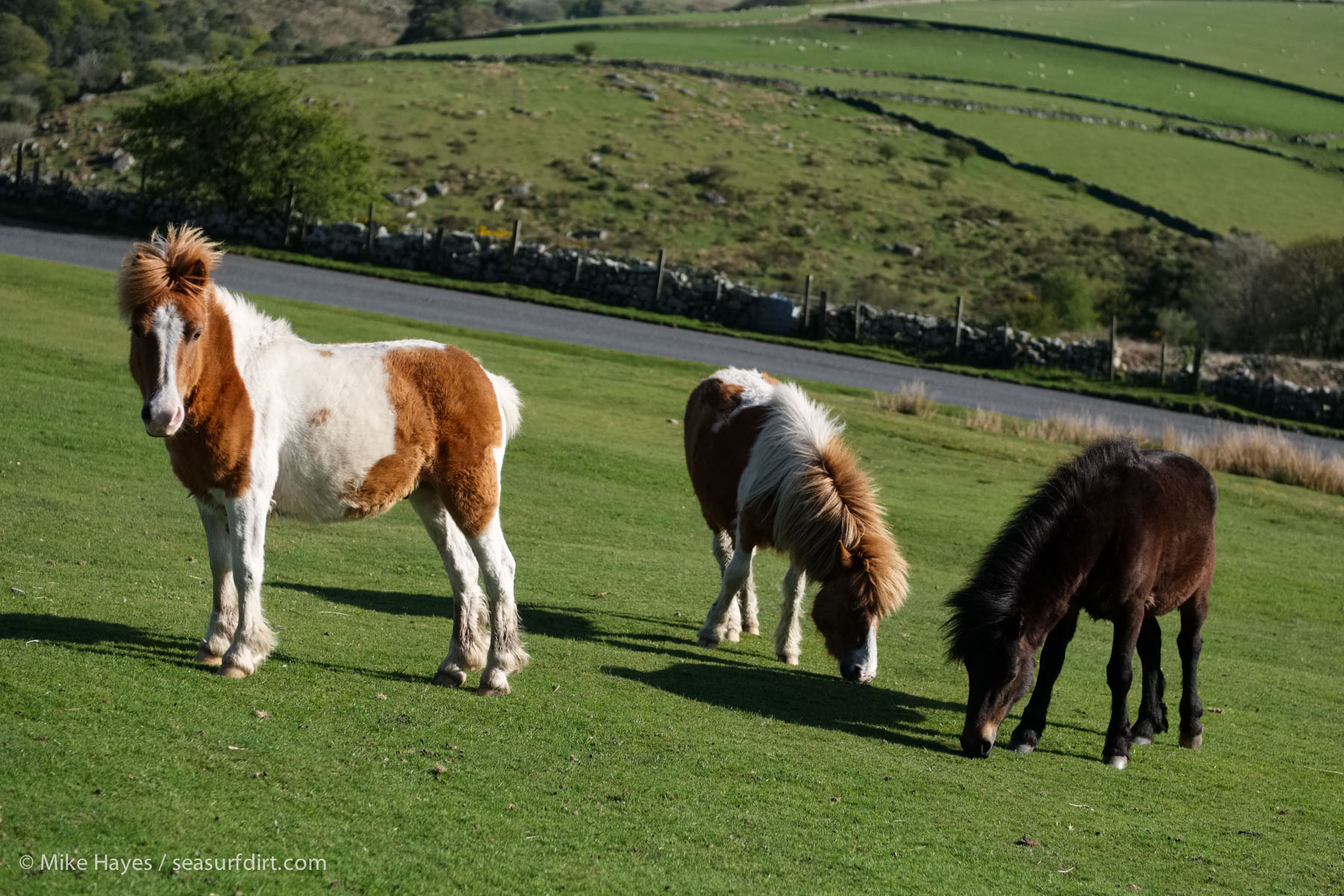 Other residents of the moor. 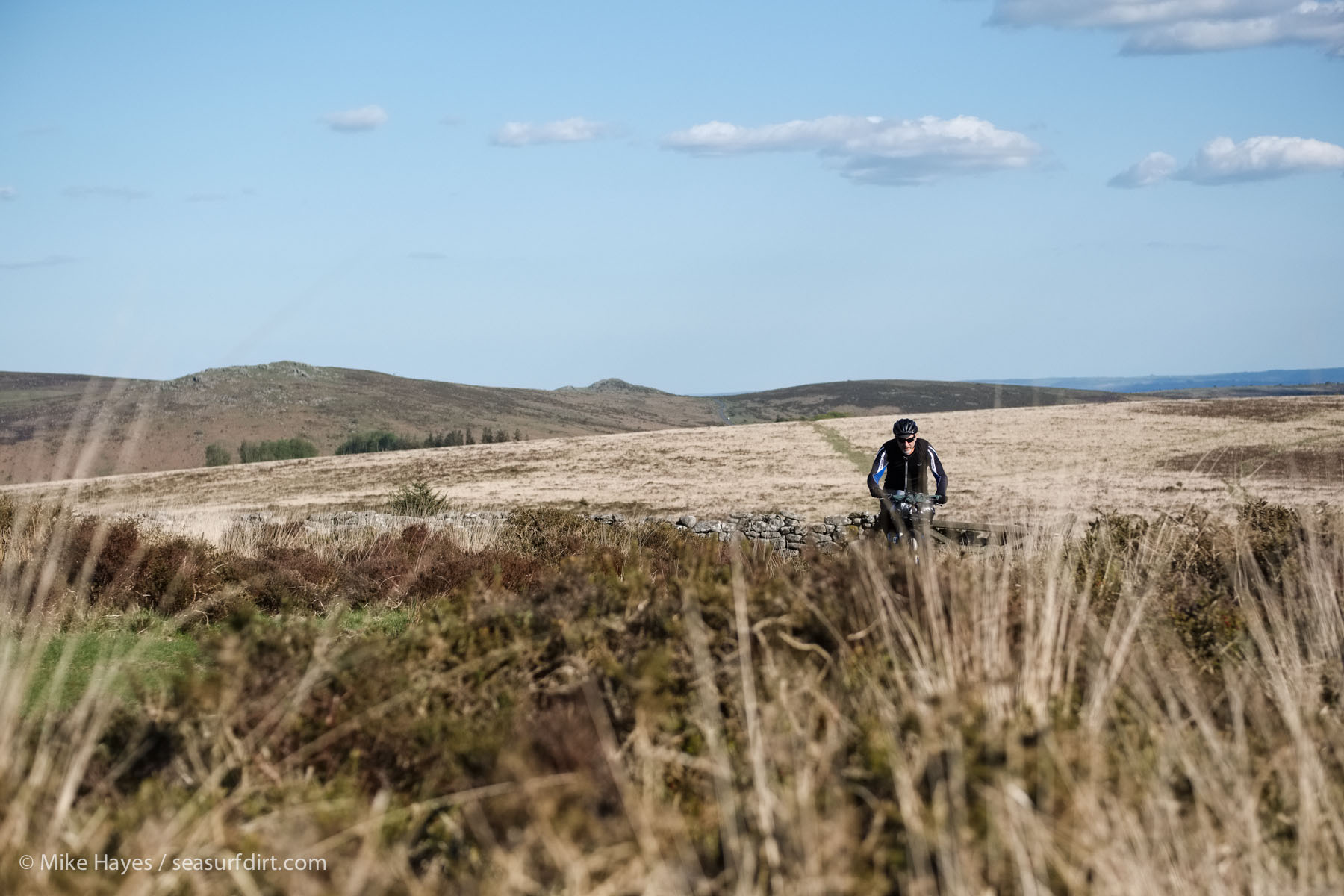 We rode until about 7.30 in the evening… 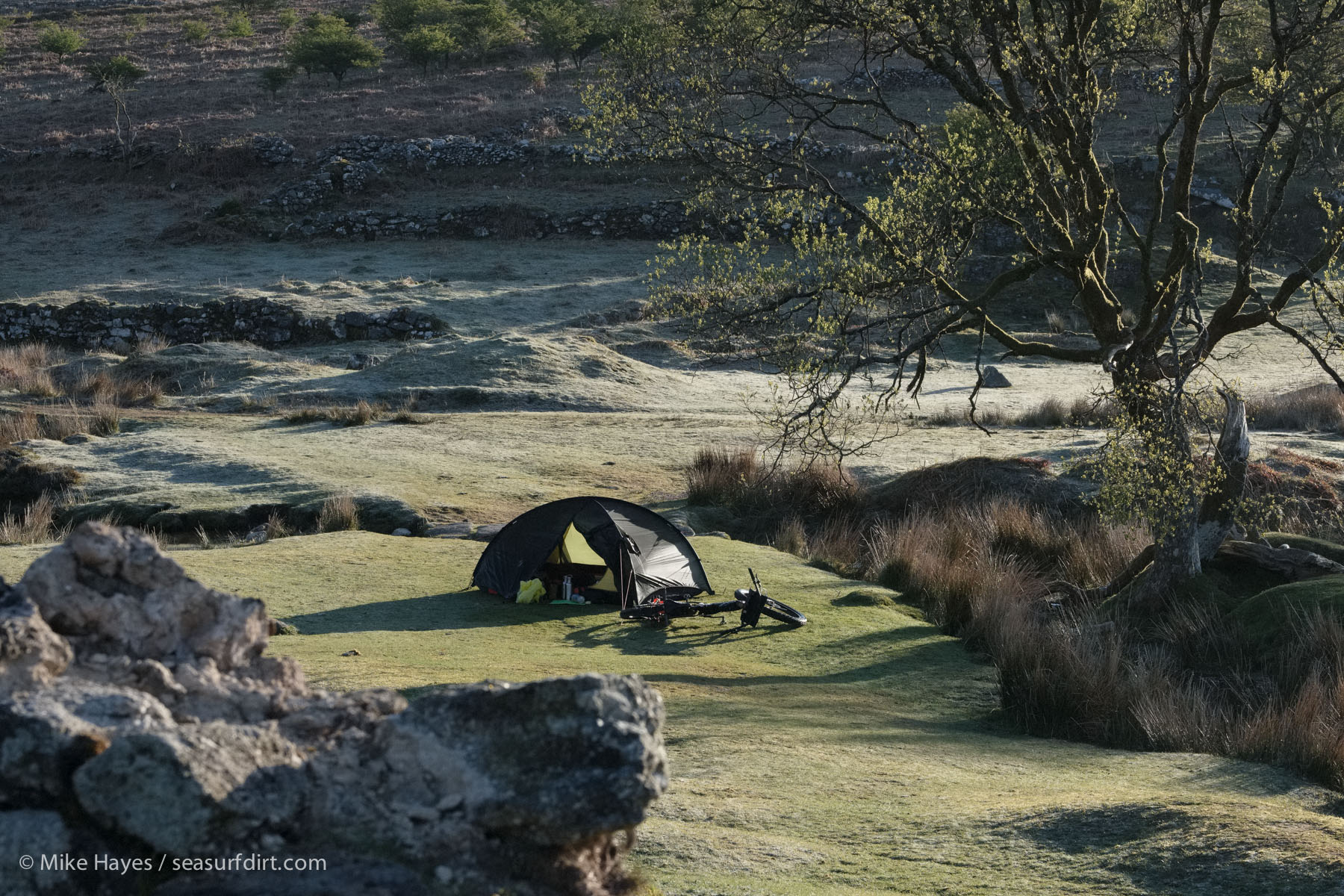 … before stumbling on a rather fabulous spot for a camp. A sheep-shorn meadow tucked away in a valley by a bubbling brook for a water supply. 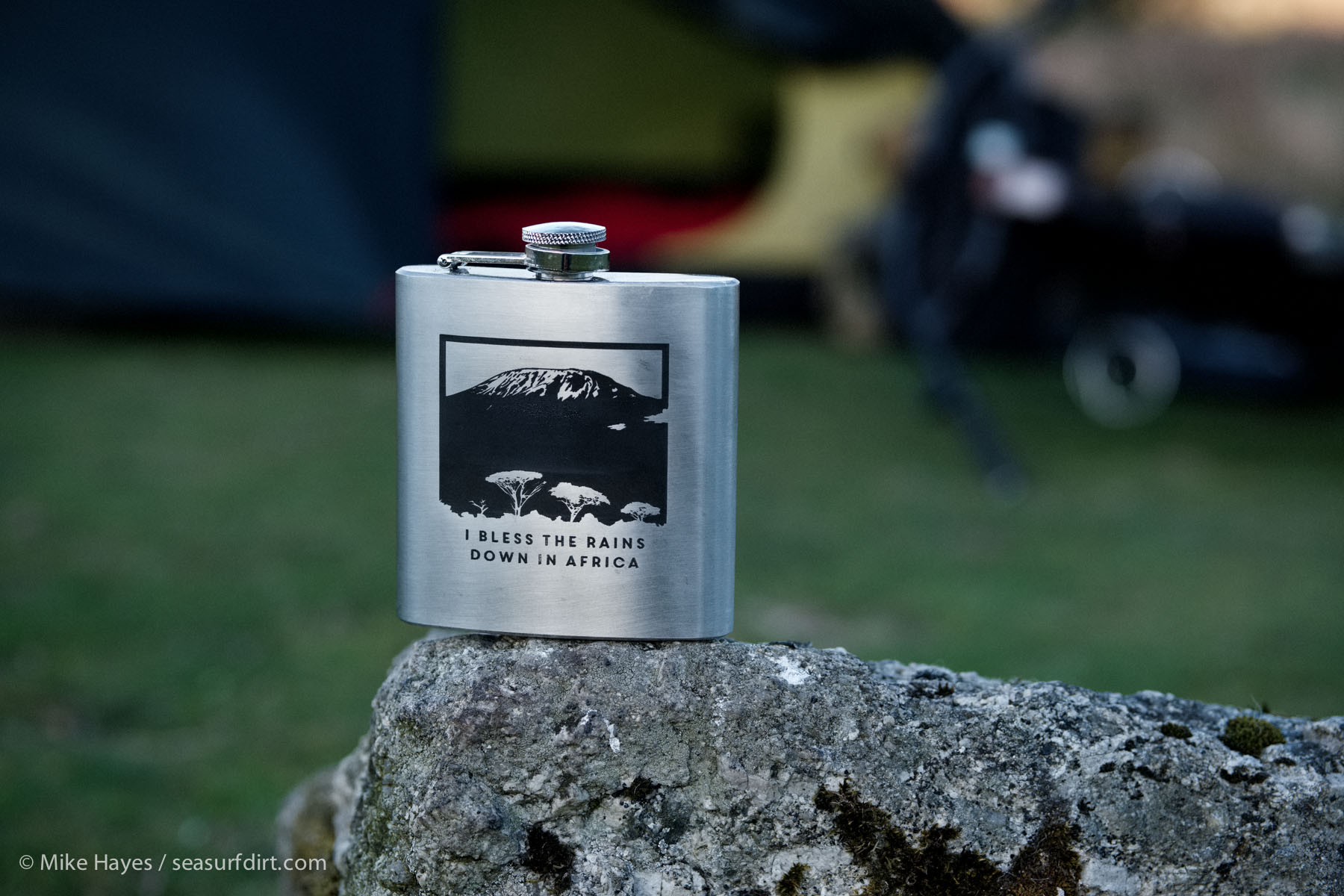 It was a peaceful evening with a soundtrack of bird song and the tinkling of the stream. My sister does good Christmas presents, the contents of which in this case helped keep the cold at bay. Toto’s ‘Africa’ is a bit of an in-joke at the moment. 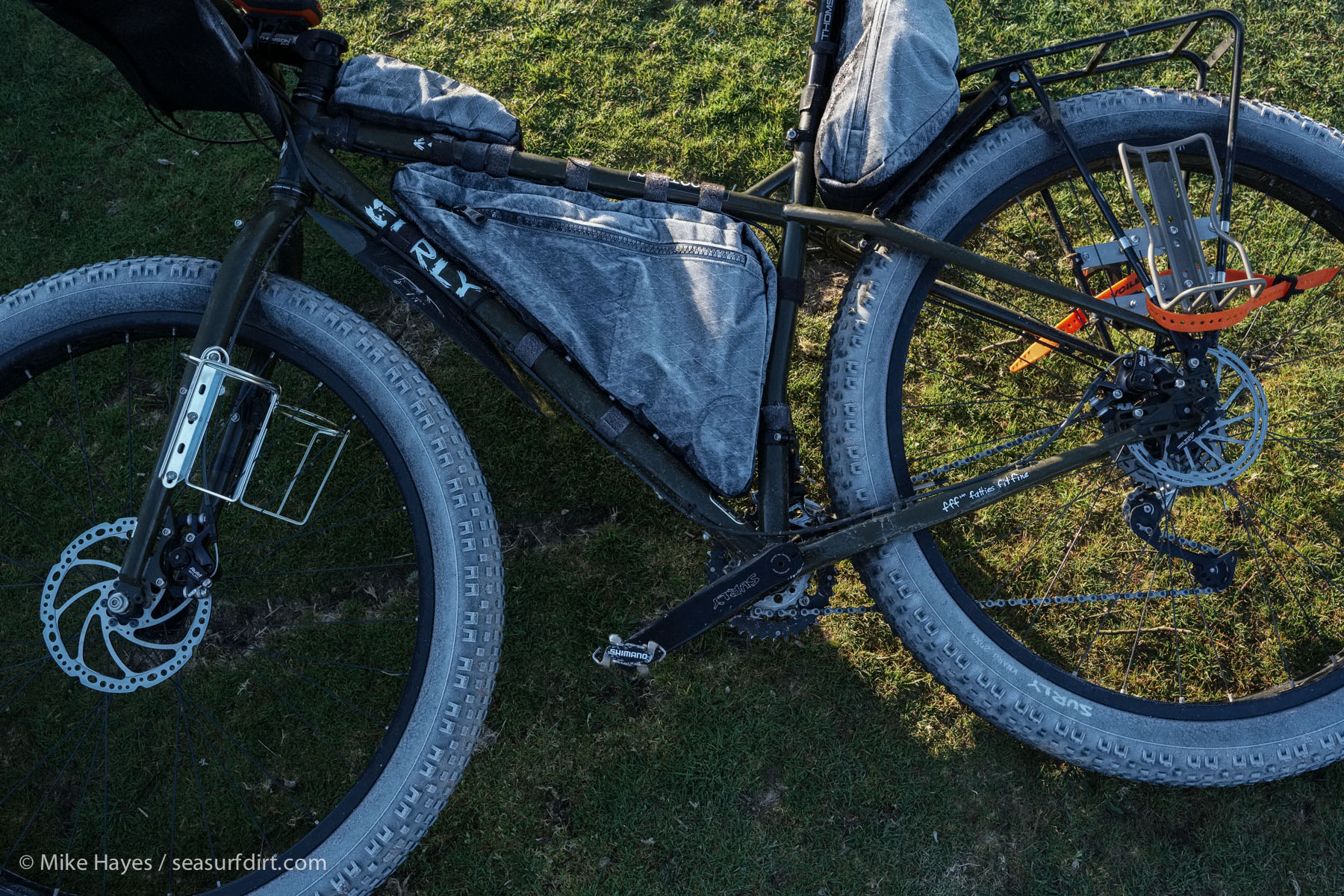 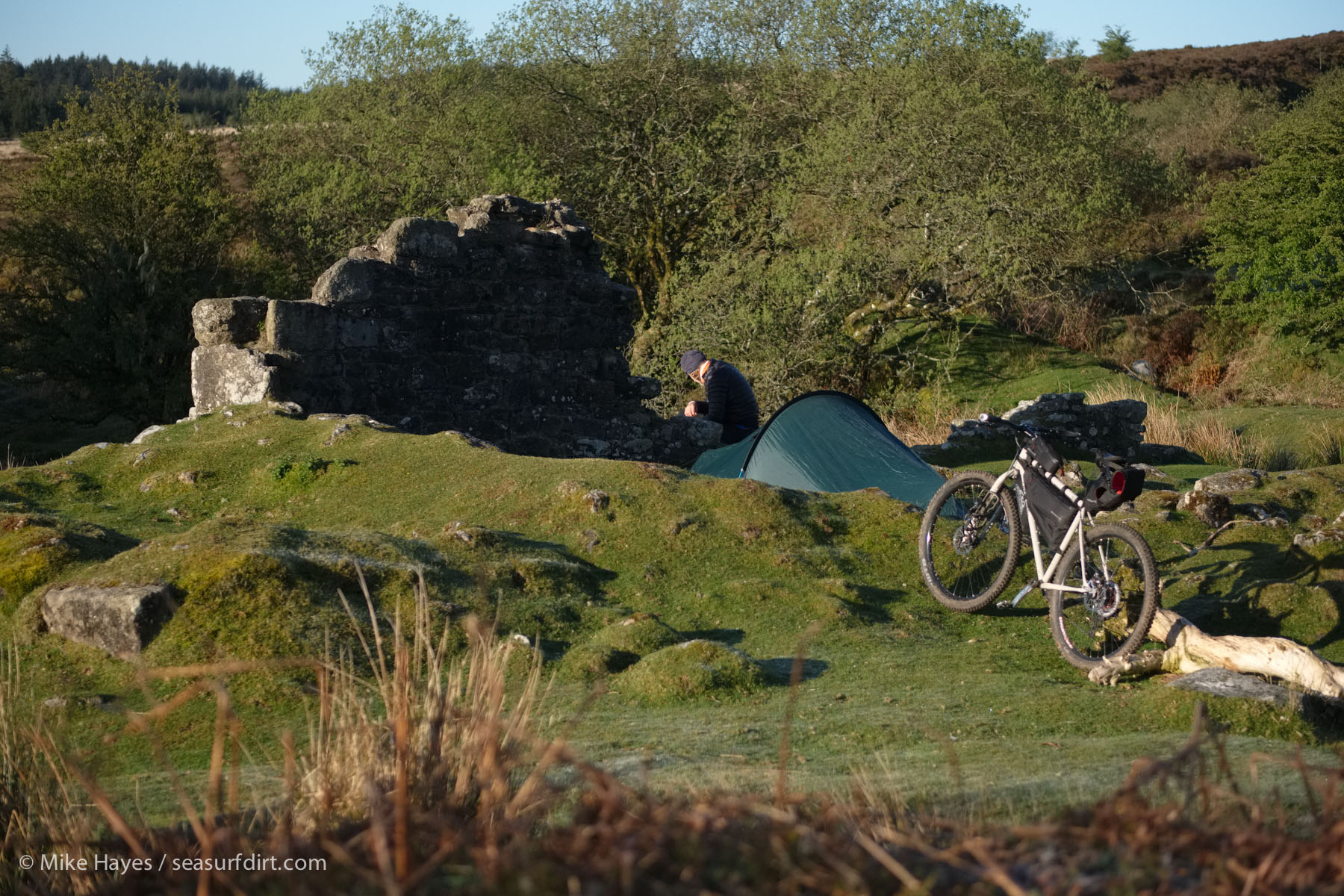 The valley had a handy ruin to break the wind and make for a good camp and kitchen spot. 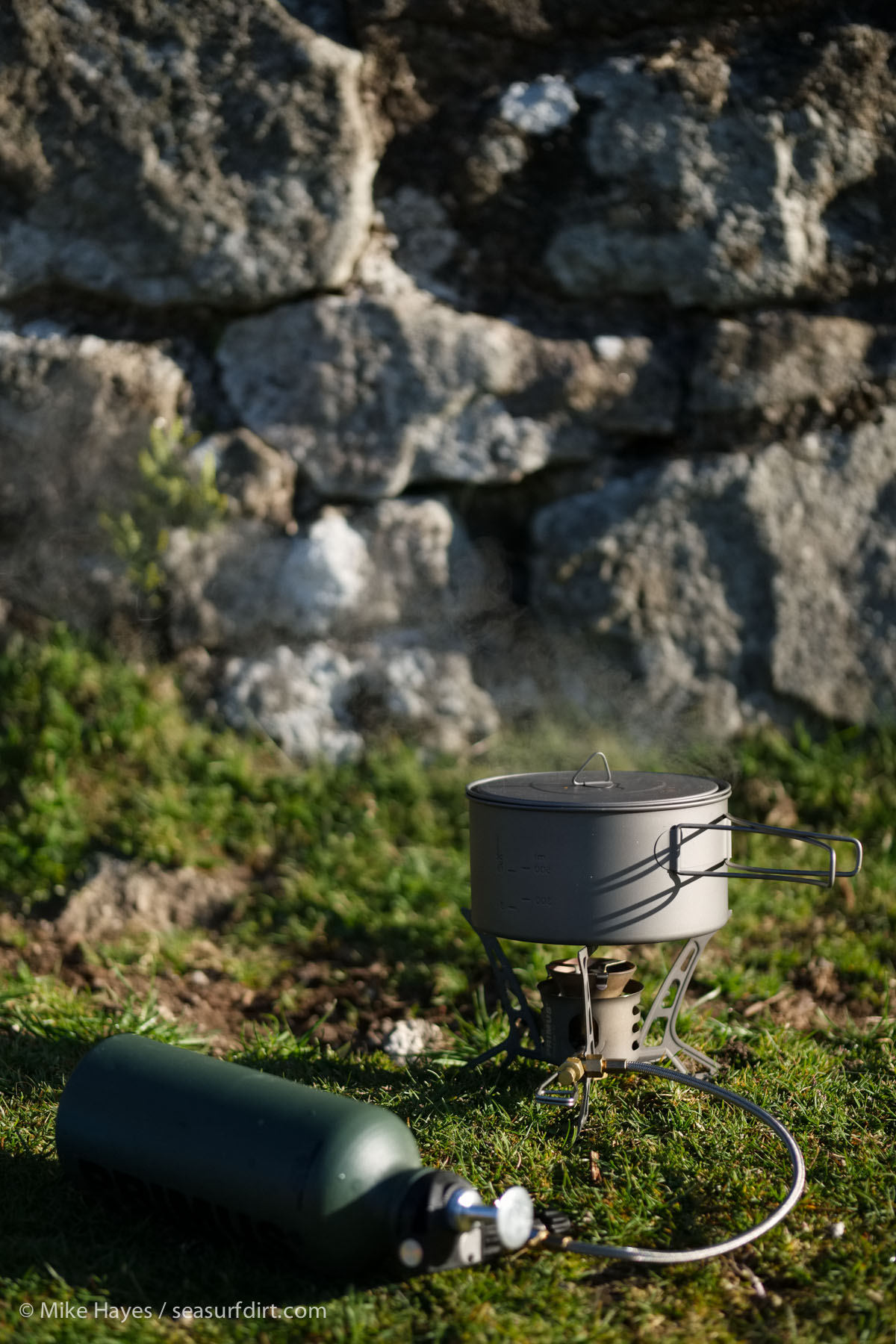 Brew on… I took my multifuel stove, It’s heavier and bulkier than an alcohol stove but not having used it for a while I wanted to re-baseline my expectations of fuel consumption. 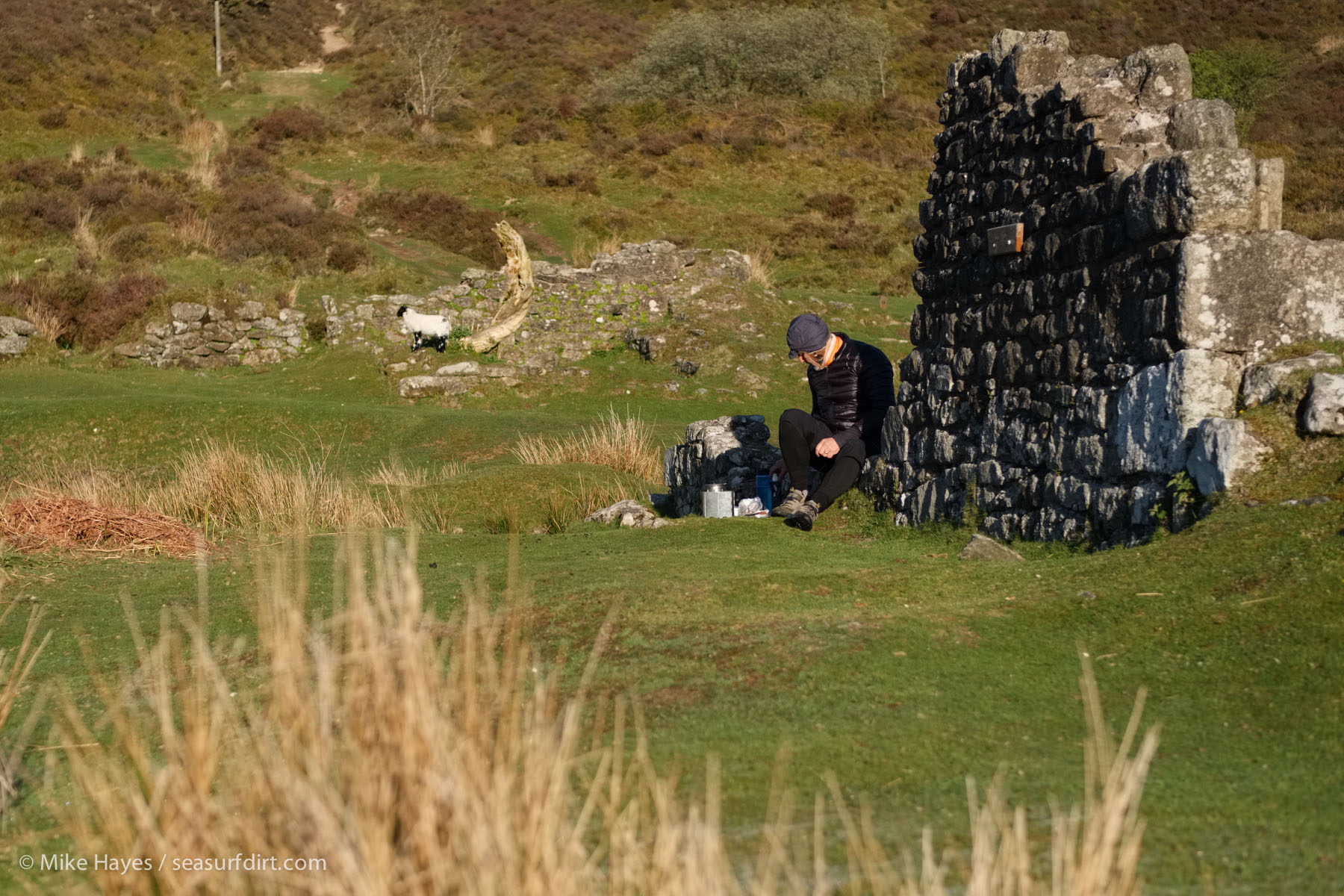 Breakfast was a leisurely affair. Being such a fabulous morning we didn’t manage to get moving until 10am. 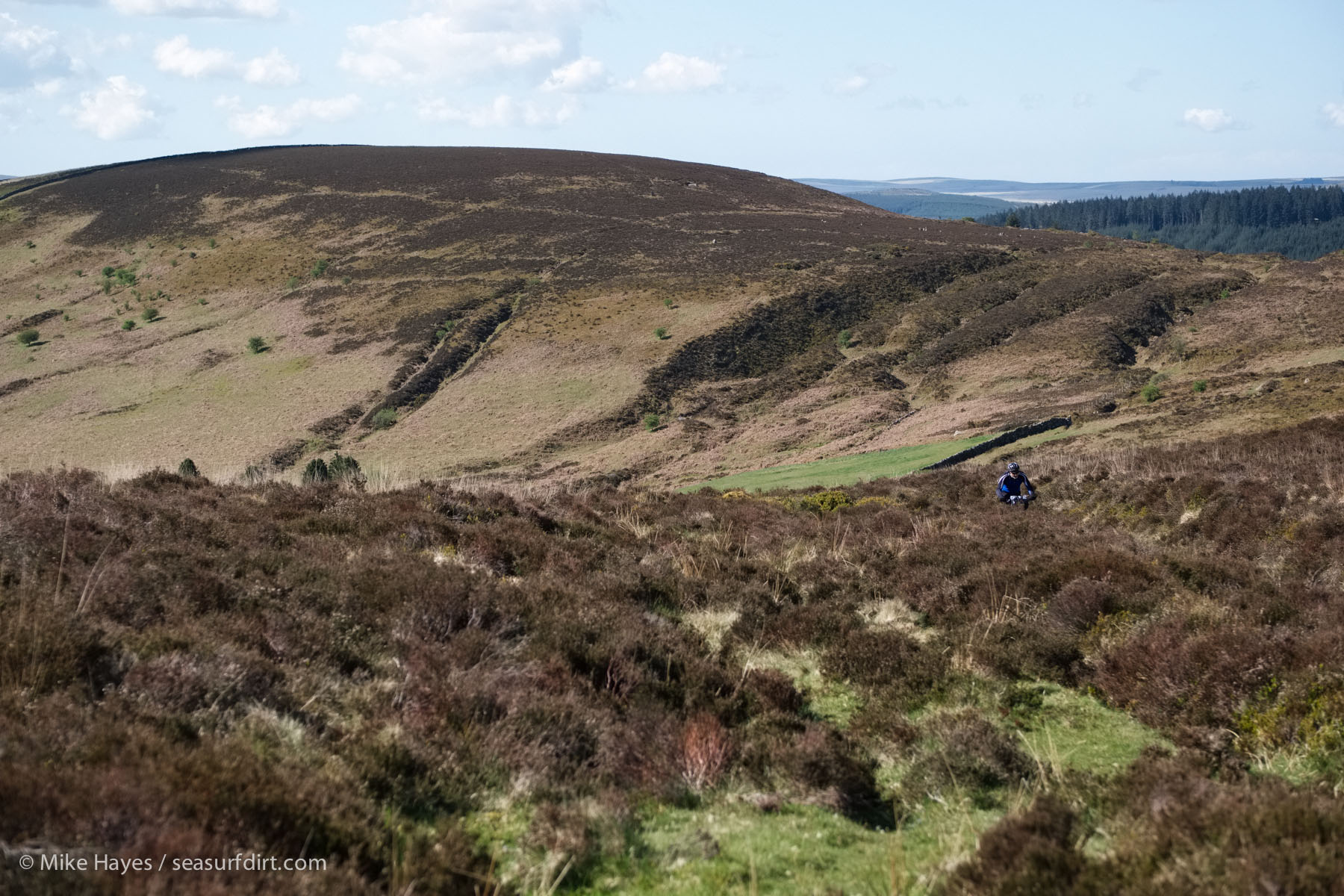 A long climb back up onto the tops. 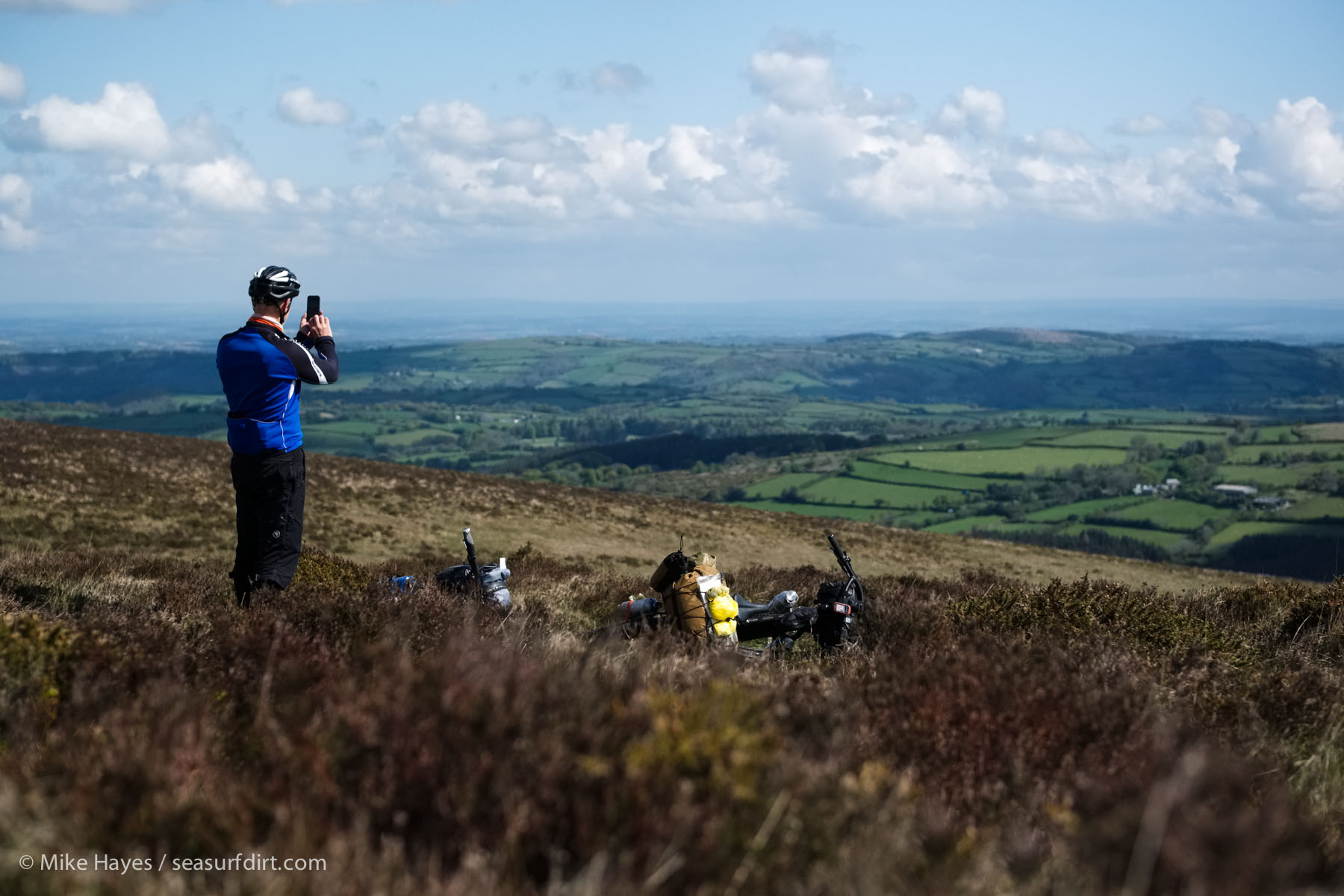 Terrific views to the north east. 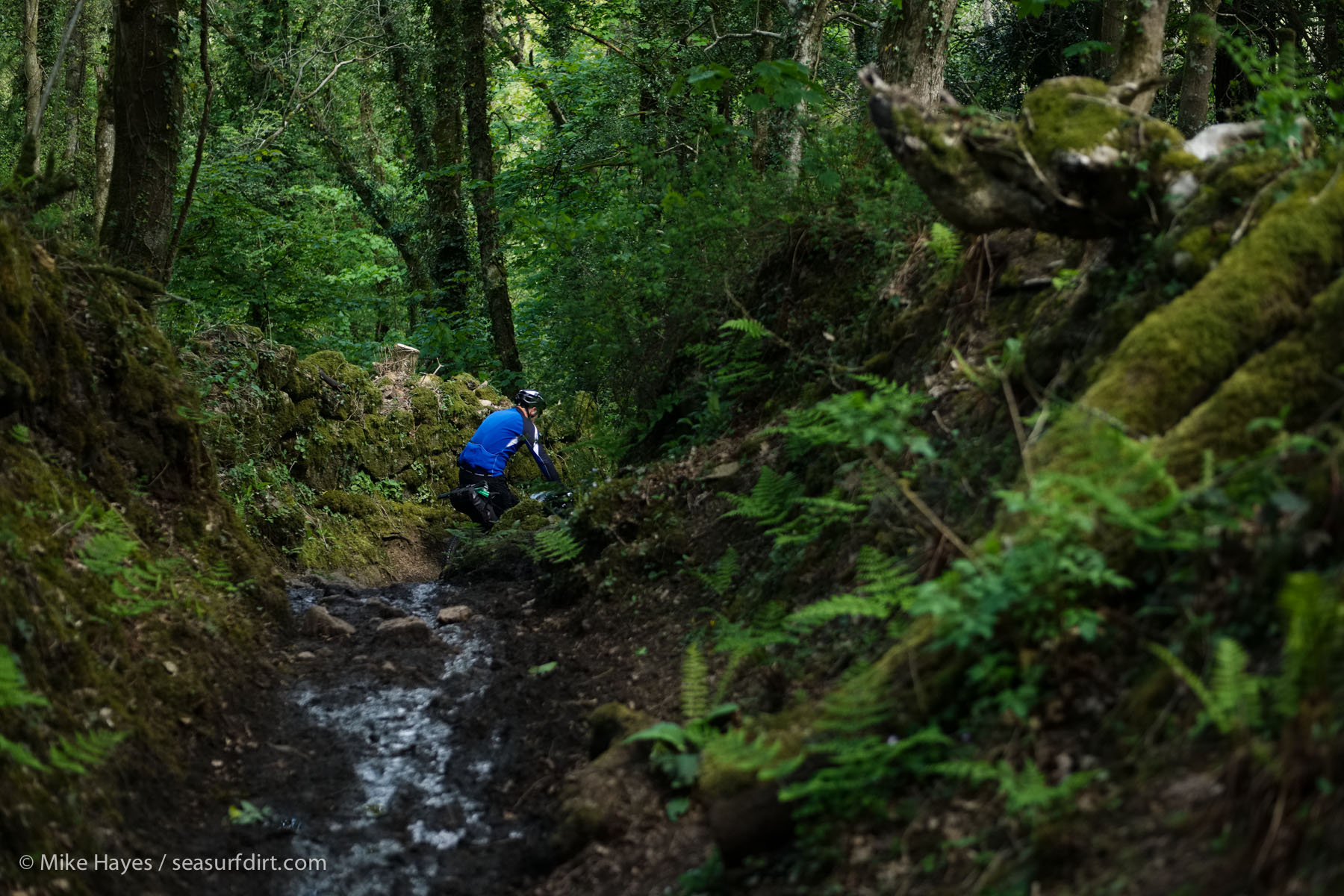 The eastern side of the moor features steep, deep, wooded ‘cleaves’ such as this one… 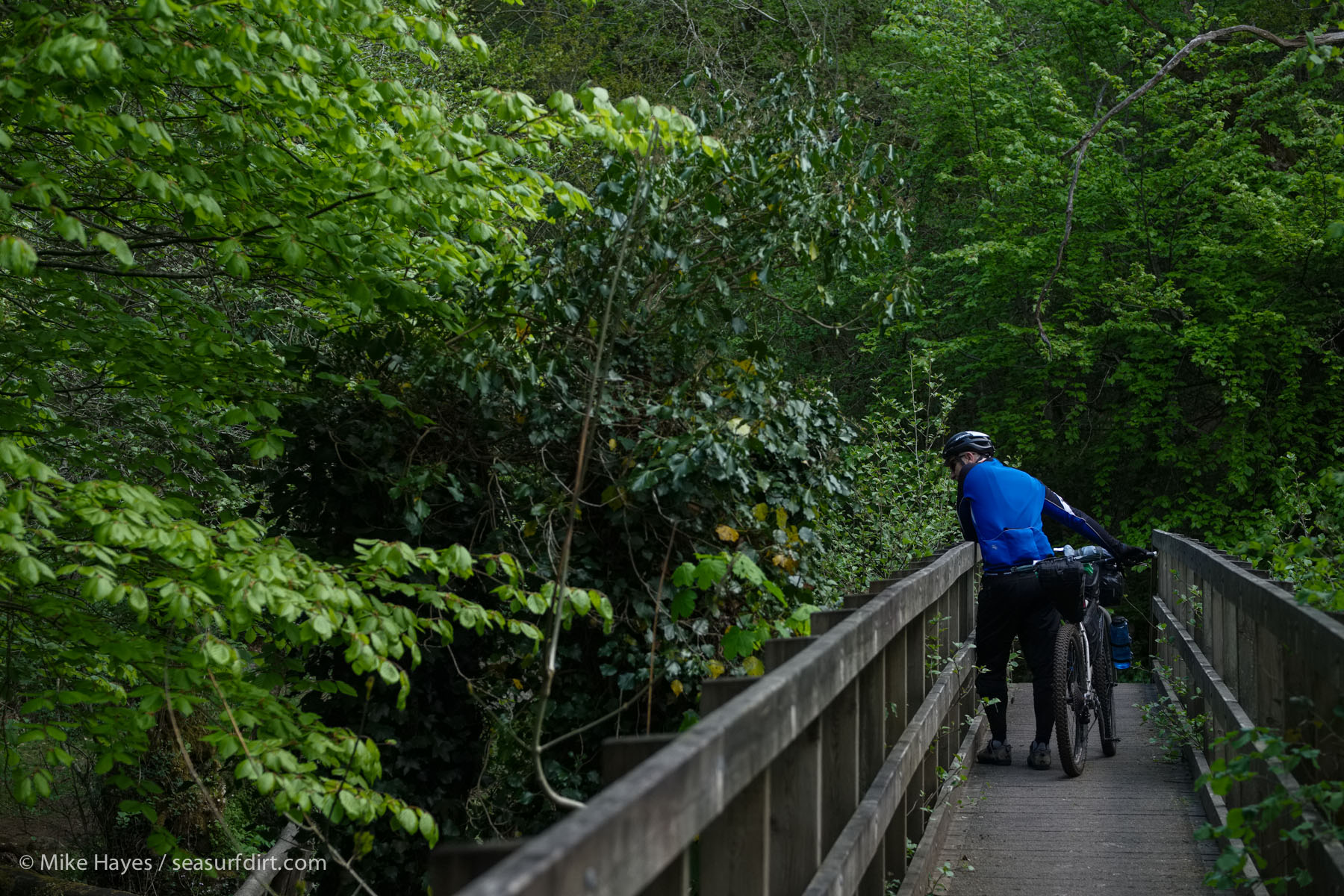 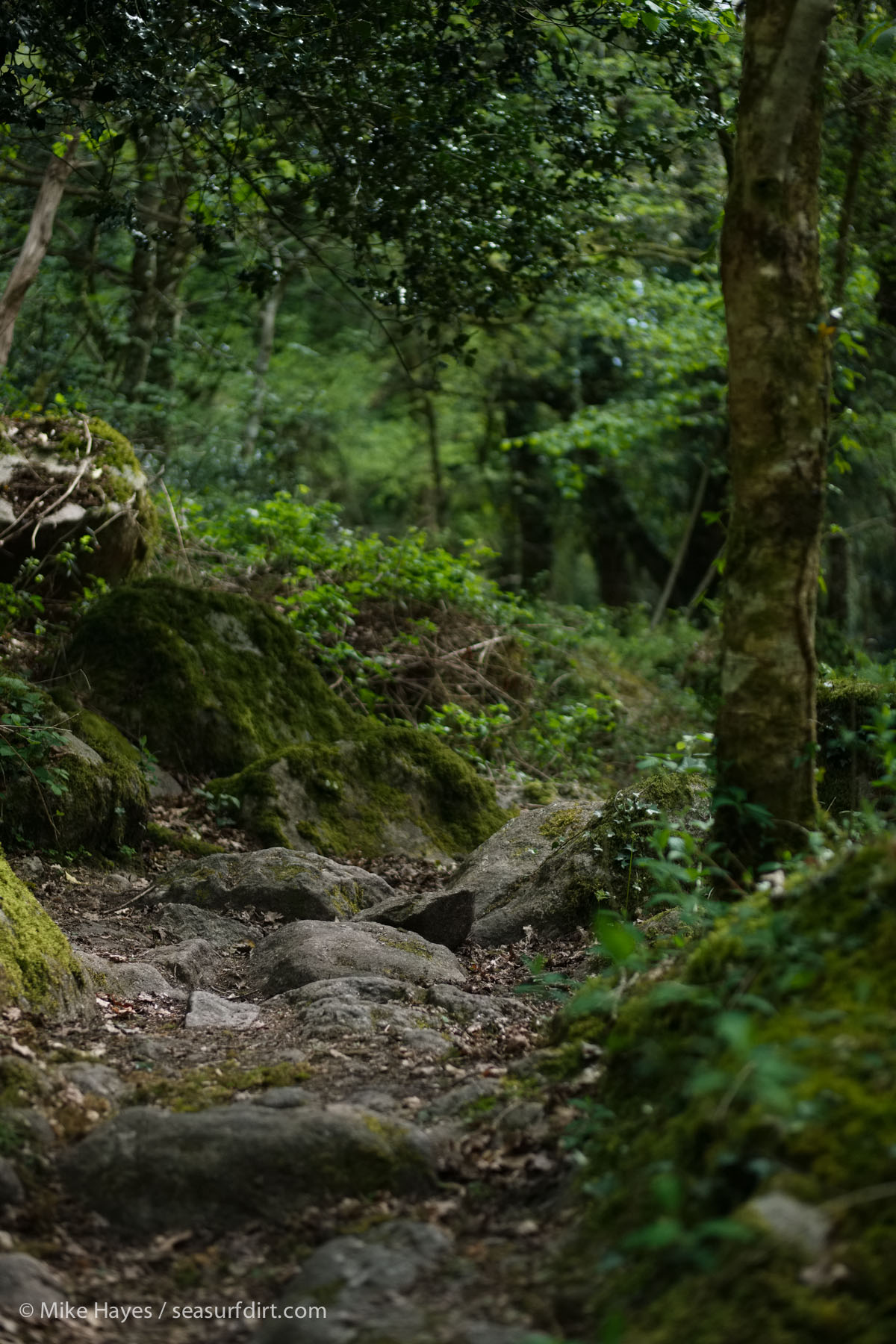 The trails can be extremely steep and occasionally challenging on a loaded bike. 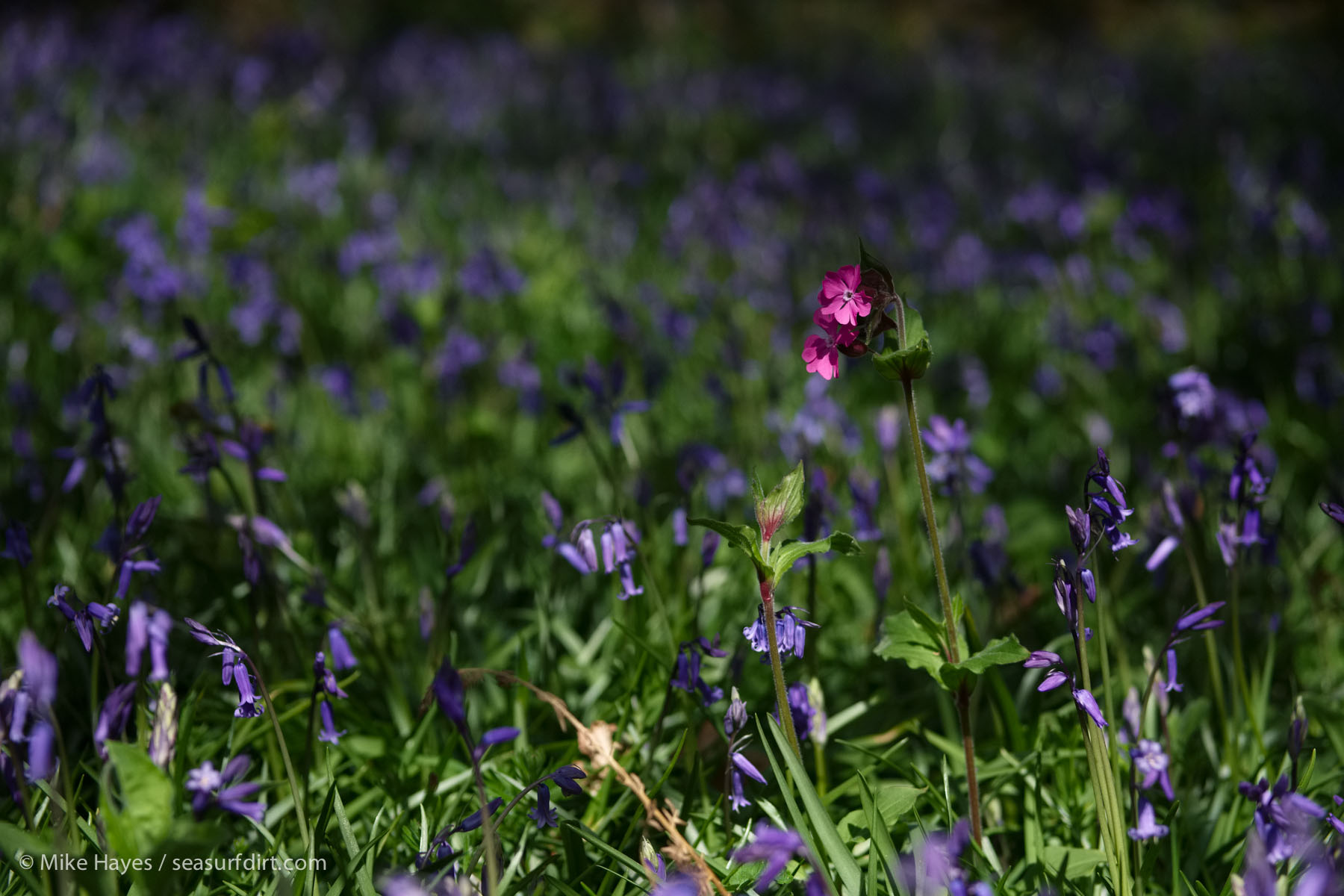 At this time of year the forest glades are gloriously carpeted with bluebells, and the occasional pink interloper… 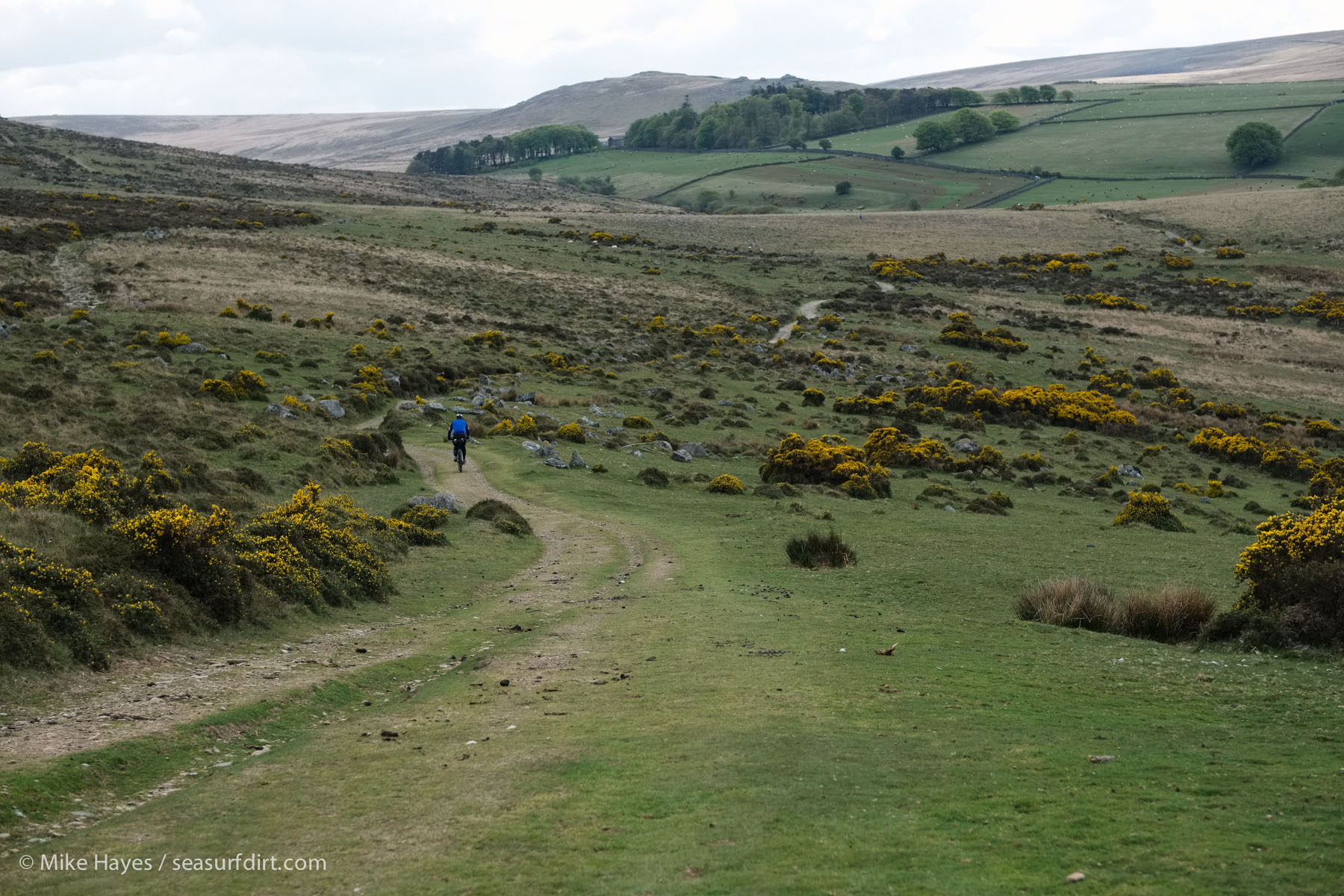 Heading around the north-west of the moor to close the loop.