It wasn’t quite what I had planned for the road ahead, however there are far worse ways to spend an afternoon than introducing a ten year old Aymara lad to the delights of skimming stones on the shore of Lake Titicaca, not to mention enjoying other ten year old things, reminiscent of my own childhood, such as getting filthy scrambling up and down loose cliffs, messing in old boats and so on. The sort of stuff I will never tire of. 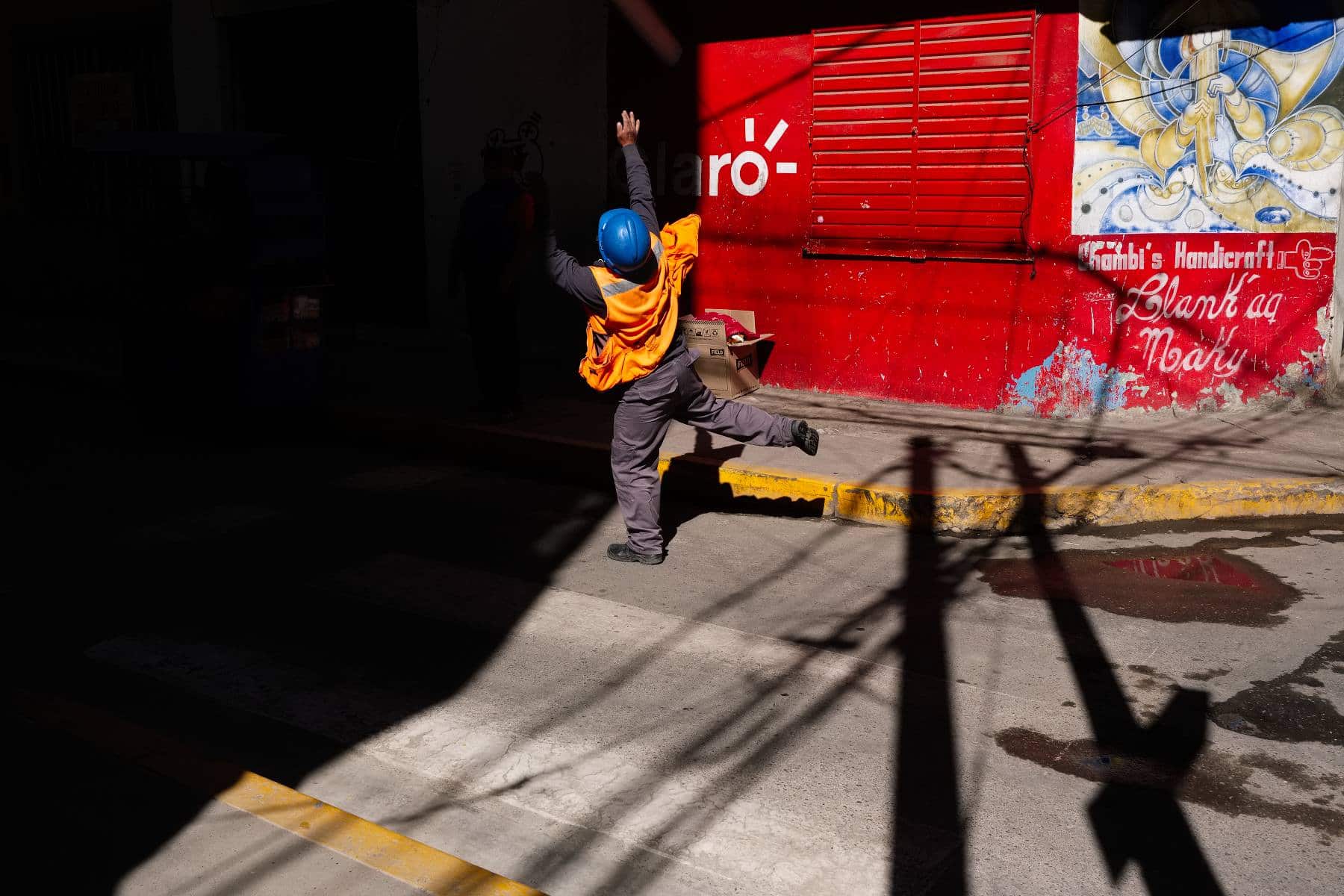 Had I not spent a bit of time in Puno I would not have stumbled across this moment. Something of a recent favourite, it only takes one good frame to make my day.

My ride to Arequipa didn’t happen. The impact of the volcano turned out to be much greater than I originally expected, covering a large swath of land northeast of the volcano in ash; exactly the direction I’d have been riding. While the eruption has settled down volcanic ash is really nasty stuff if it gets into lungs, and the volcano remains on high alert so, despite rather fancying the photo ops, I’d look a bit of a wally if I rode that way anyway and either ended up with ash in my lungs, or caught out in another eruption. I would have enjoyed visiting the place again but such is life.

This link, https://watchers.news/2019/07/19/ubinas-volcano-eruption-peru-july-19-2019/ , has some really great pictures and a satellite photo showing the extent of the ash cloud.

Having already forked out for a bus ticket to Puno I just went that way anyway. Not as ‘blessed’ as, say Cusco or Arequipa, Puno is mostly a wash of bare block constructions of unfinished appearance sweeping up the hillsides on the shores of Lake Titicaca. On a bitingly cold, heavily overcast day it is not a particularly alluring prospect, and exists as a destination purely for the floating villages and offshore islands. Islands that seem to have largely been turned into a theme park, even more so now than when I visited in 2010. I did not feel the need to revisit. 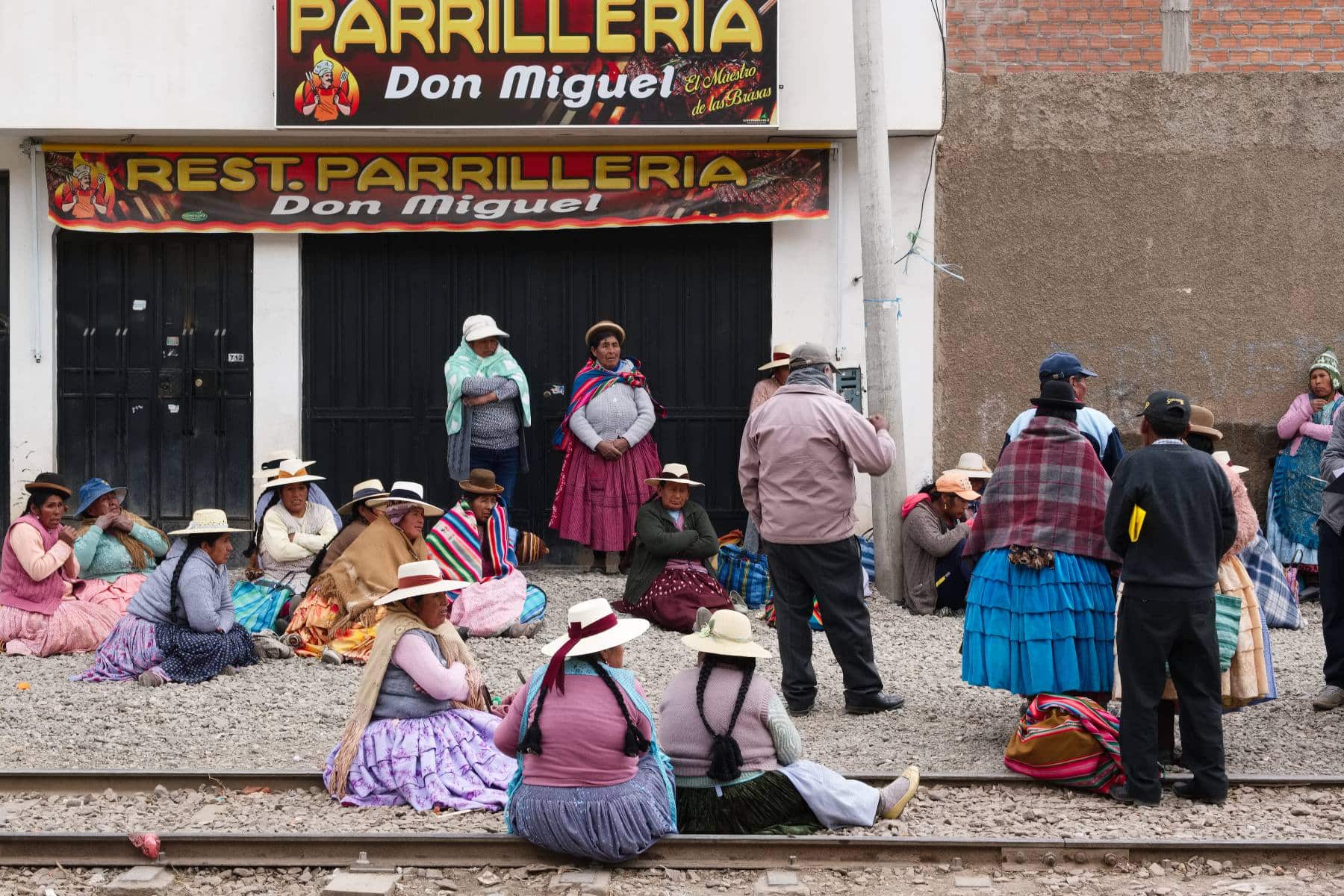 The thing about places like Puno is that when you make a bit of time to mooch around there are always unexpected highlights, highlights that perhaps bring greater pleasure than they might otherwise have done in a place more obviously ‘blessed’. Having strolled along the scruffy, grey waterfront with its collection of well-worn and faded Disney-themed pedalos for hire, and while looking for lunch I stumbled across a vegan restaurant of all things. A somewhat unexpected find it turned out to be absolutely packed with locals, all busily tucking into a variety of ‘vegan equivalent’ dishes, brought from the kitchen by a steady stream of cheerful, yellow-uniformed staff. The menu included such wonders as vegan trout and vegan alpaca.. from what I could see these were variations on a theme of fried or baked quinoa patties. My choice of an enigmatically named “stew of local ingredients” was alright, albeit very yellow, however the highlight for me was the self-serve salad bar with rare delights such as beetroot and white beans. I shared a bright yellow table in the corner with two old ladies who told me they ate there almost every day, while what appeared to be a muted Korean news and dance channel played on the widescreen TV up on the wall. All this to a soundtrack of Chris de Burgh’s Lady in Red on pan-pipes wafting from the stereo. Just one of those wonderfully odd moments that travel dishes up from time to time. After a morning of feeling weary and a little depressed from a long bus ride I felt at home and happy.  I’m sure the place will be in the Lonely Planet or whatever people use these days but I don’t have one of those, instead I thoroughly enjoyed my trivial little ‘discovery’. 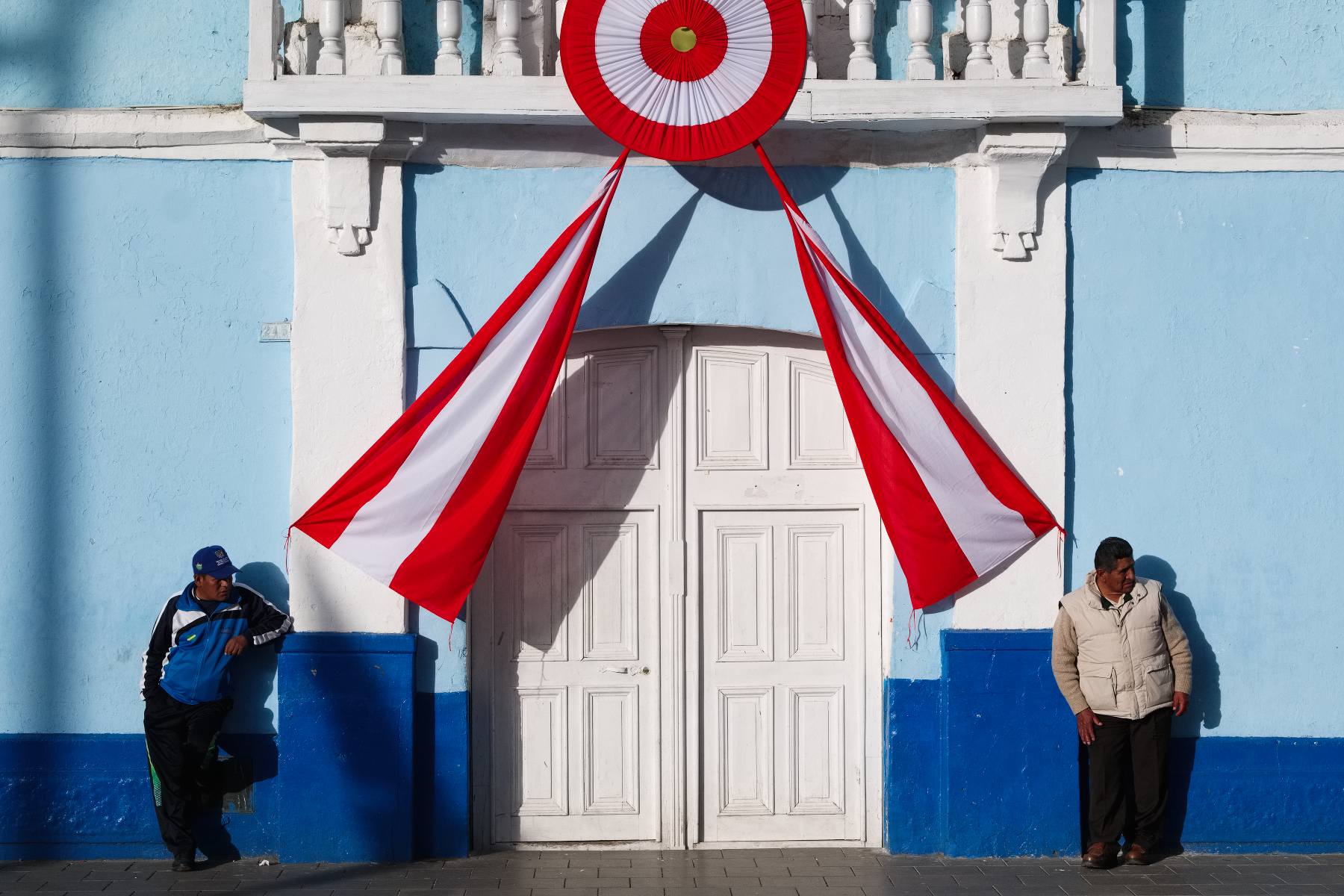 I stayed two days in Puno, in part to get over the bus ride, in part because I needed to fiddle with my bike before hitting the road again, make some plans for the road ahead.. and in part because I just don’t like rushing. The bus was also a reminder that I was now very much back in tourist land, being mostly full of young backpackers. Sadly the first time in some three weeks that I got to dust off my English was to tell a backpacker in the seat behind to stop being such an asshole to the Mexican girl in the seat next to me. She spoke no English and turned out to be a terrific journey companion with a lovely musical voice and a great sense of humour. 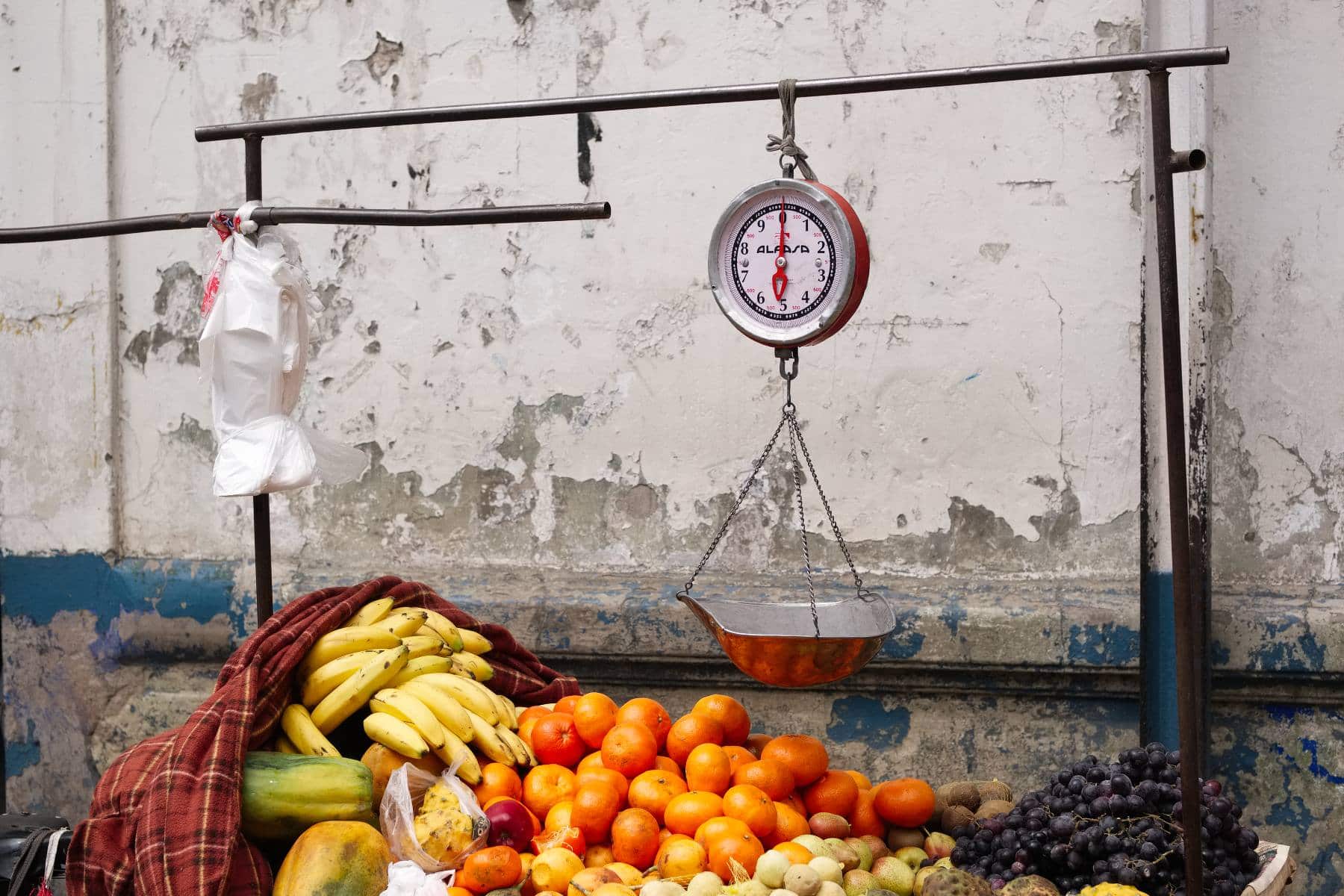 Leaving Puno, on two wheels at last, was interesting. Similar to the events while riding around Sibayo a couple of years ago, all the roads were closed by violent protests. The government hands out mining concessions willy-nilly, essentially to whoever has the largest wallet (mostly British, Australian, and Canadian businesses), and in consequence Peru has one of the most damaged environments on the planet. Communities are destroyed and/or forcibly relocated, landscapes destroyed, water sources are contaminated and so on. There is a huge degree of discontent amongst the people about what is going on and with the announcement of new concessions and the approach of Peru’s Independence Day (28th Jul) matters came to a head once again. I walked my bike through a large protest blocking the road out of Puno… burning tyres, rocks, and the evidence of some fierce fighting. The riot police were much in evidence but largely standing by.. I get the feeling that many of the police may share the same sentiments. From a purely selfish point of view I benefited enormously from a road utterly devoid of traffic. A sad story that I’ve seen repeated all over South America. 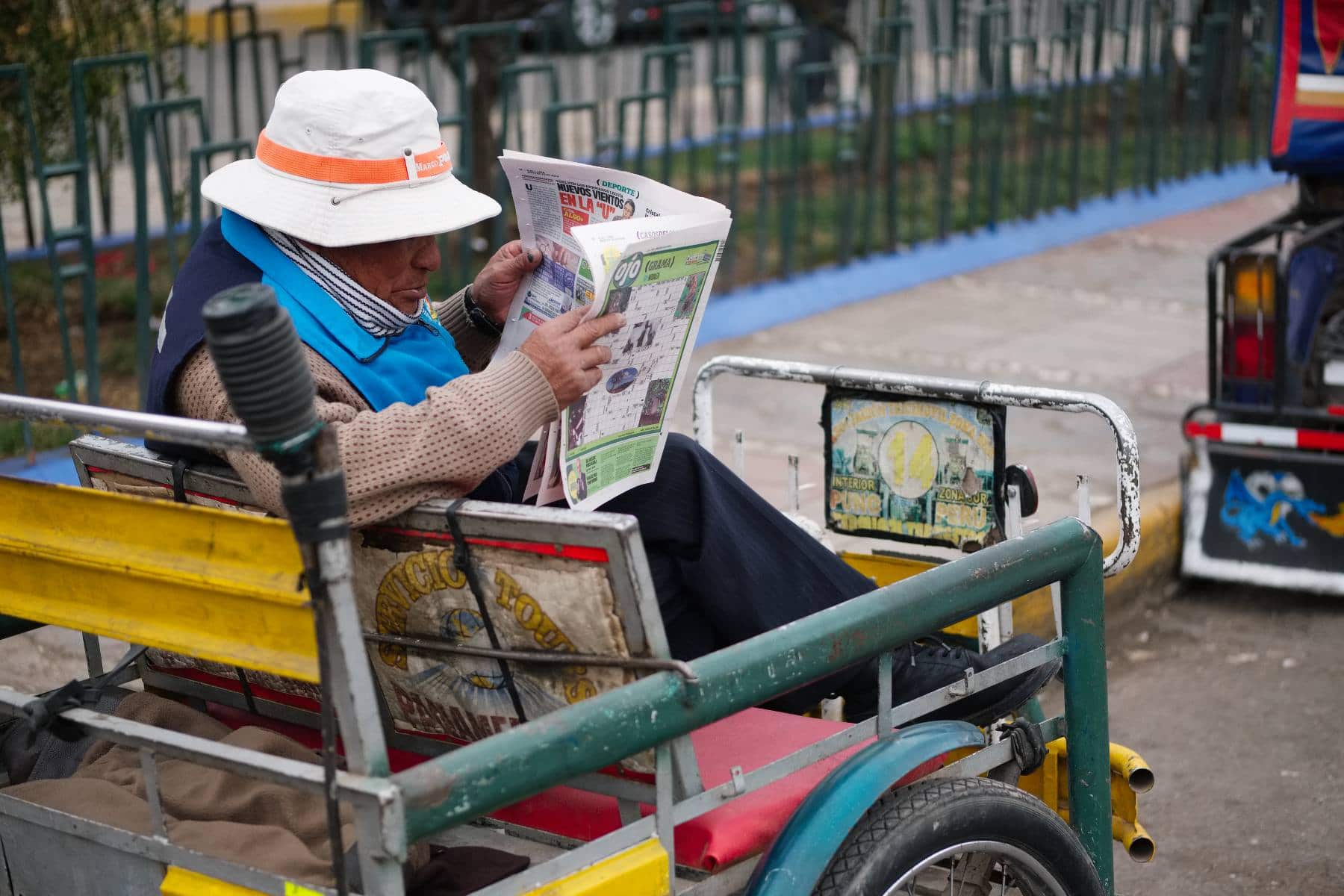 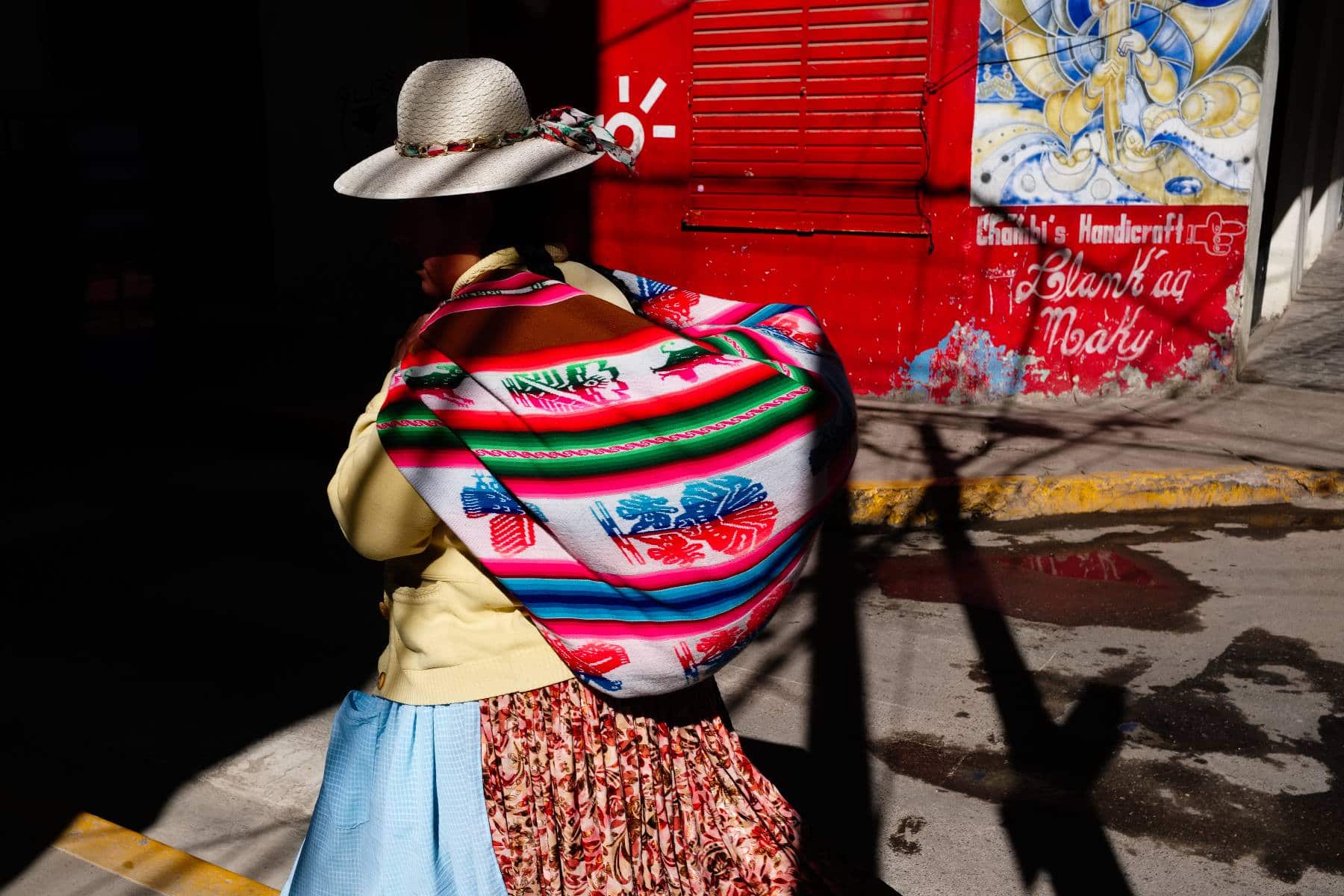 The light and colour at that corner in the first pic was so good that having arrived at that perfect moment I hung out for a few minutes to see if anything else interesting came along. 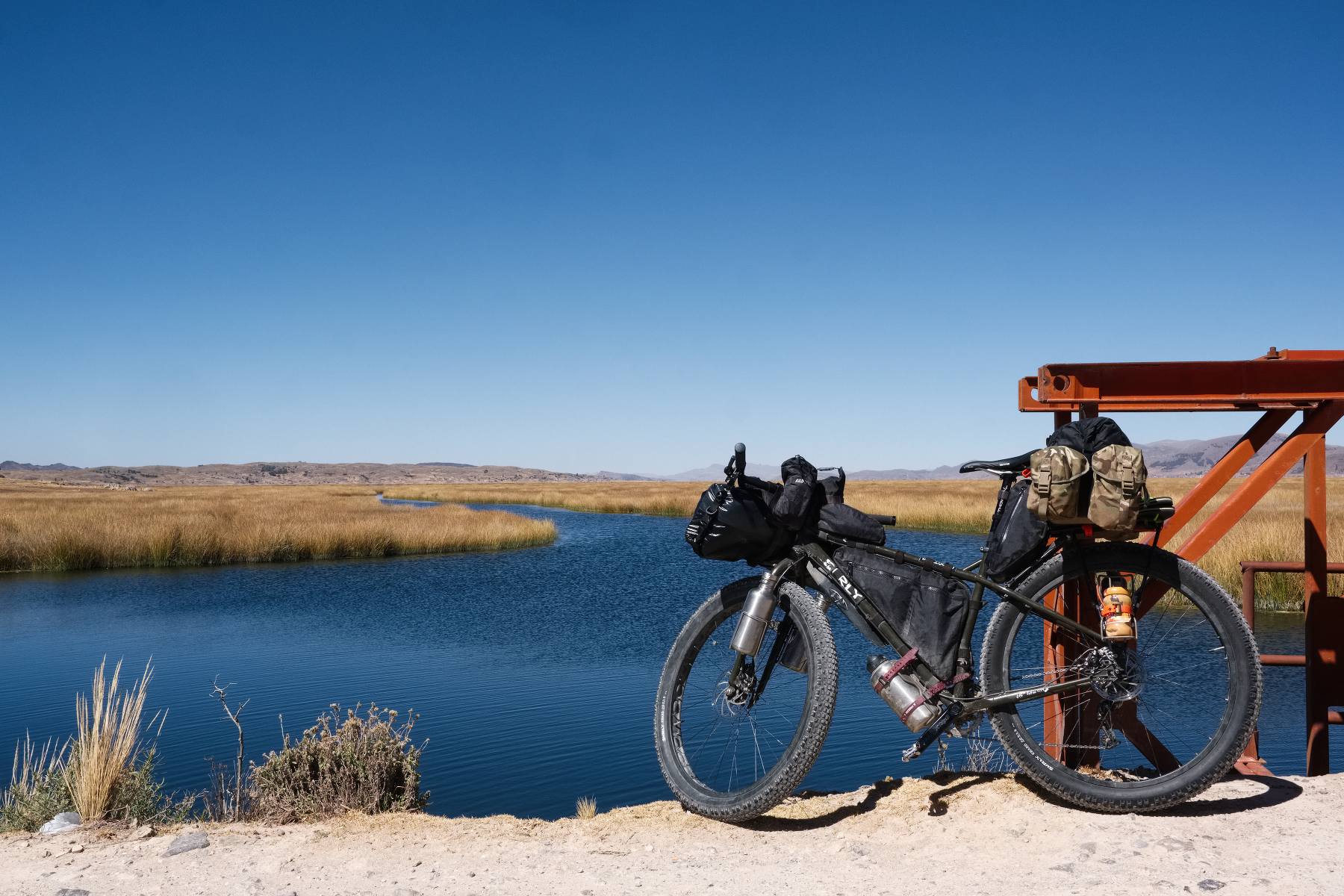 On the road again, at last.

Given the Ubinas eruption I needed a new plan. Still feeing unsure of my fitness I elected for a relatively chilled (it’s still 3812m / 12,500ft ASL after all) trundle along the shores of Titicaca on a scenic, meandering dirt track far removed from the busy road from Puno down to the Bolivia border. It turned out to be a good move, feeling tired after just a morning of riding, and with a noticeable lack of strength. I stopped in the little community of Luquina and found myself a lovely Aymara family to stay with. 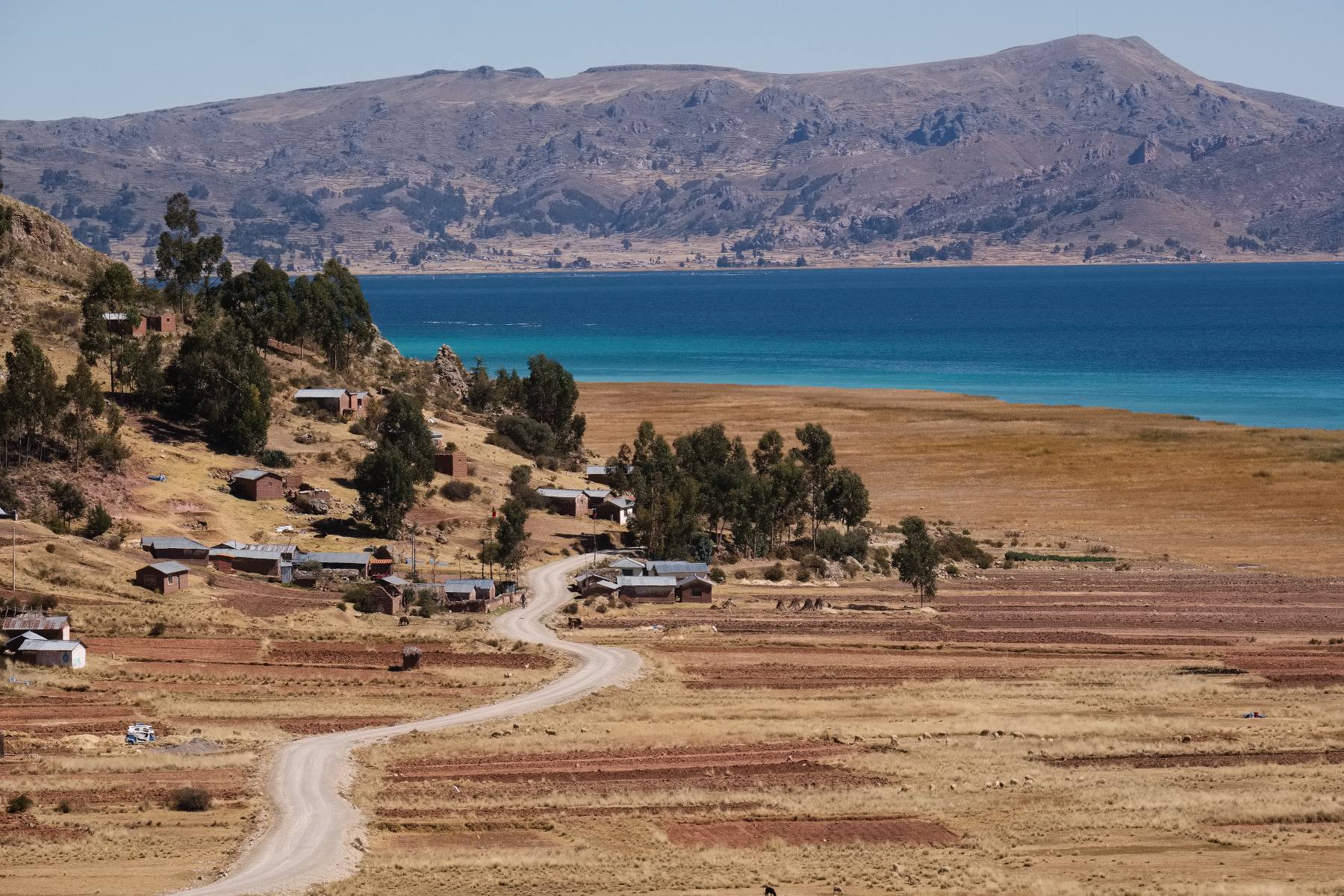 The little village of Luquina is a lovely spot for those willing to make the effort to reach it. The local Aymara community are engaged in a much more sustainable form of tourism; many families keep a spare room in which they can host travellers, and share a little of their community life. It was simply a case of asking around as I arrived in the village; I was soon installed with a lovely lady, and quickly ‘adopted’ by the aforementioned young chap for a tour of all his favourite spots. We shared dinner in a tiny, smokey adobe kitchen warmed by the dung-fired clay stove in the corner. That night, somewhat under duress, I was dressed up in traditional Aymara clobber – a bright poncho, fedora, and woven shoulder bag… given some wool tassles to wave and dragged off to a community dance. Very good fun. There are no photos, it was getting dark. Probably just as well.. tengo dos pies izquierdos… 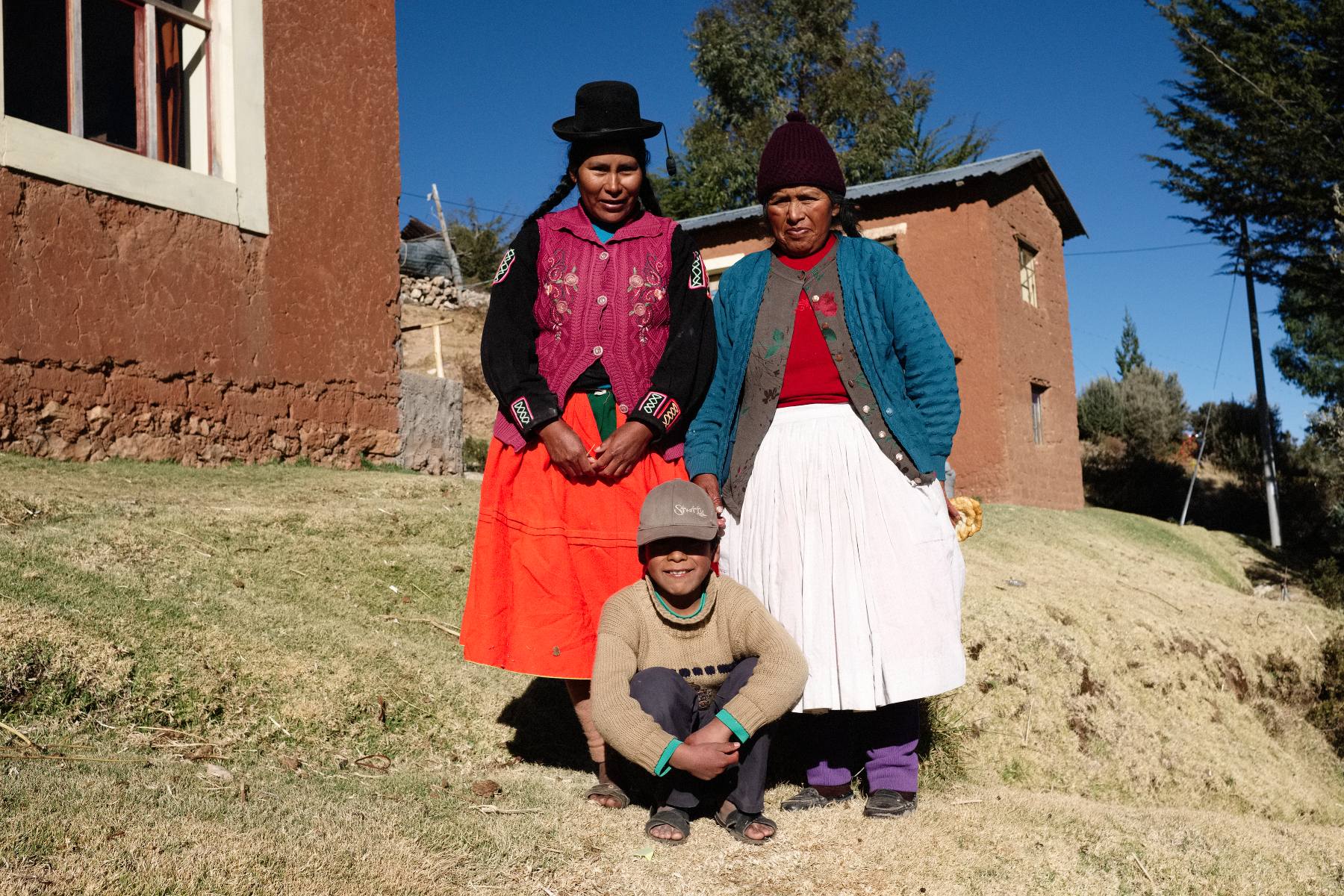 The following morning I was sent packing after breakfast with a bag of fresh local bread (a delicious, chewy, crispy fried flatbread) and a big hug for the road ahead. I treasure these moments with the people I meet around the world more than I do the big mountain adventures. There are always more mountains to ride up but time with people, and the opportunity to share in their lives, is something that feels very special to me. 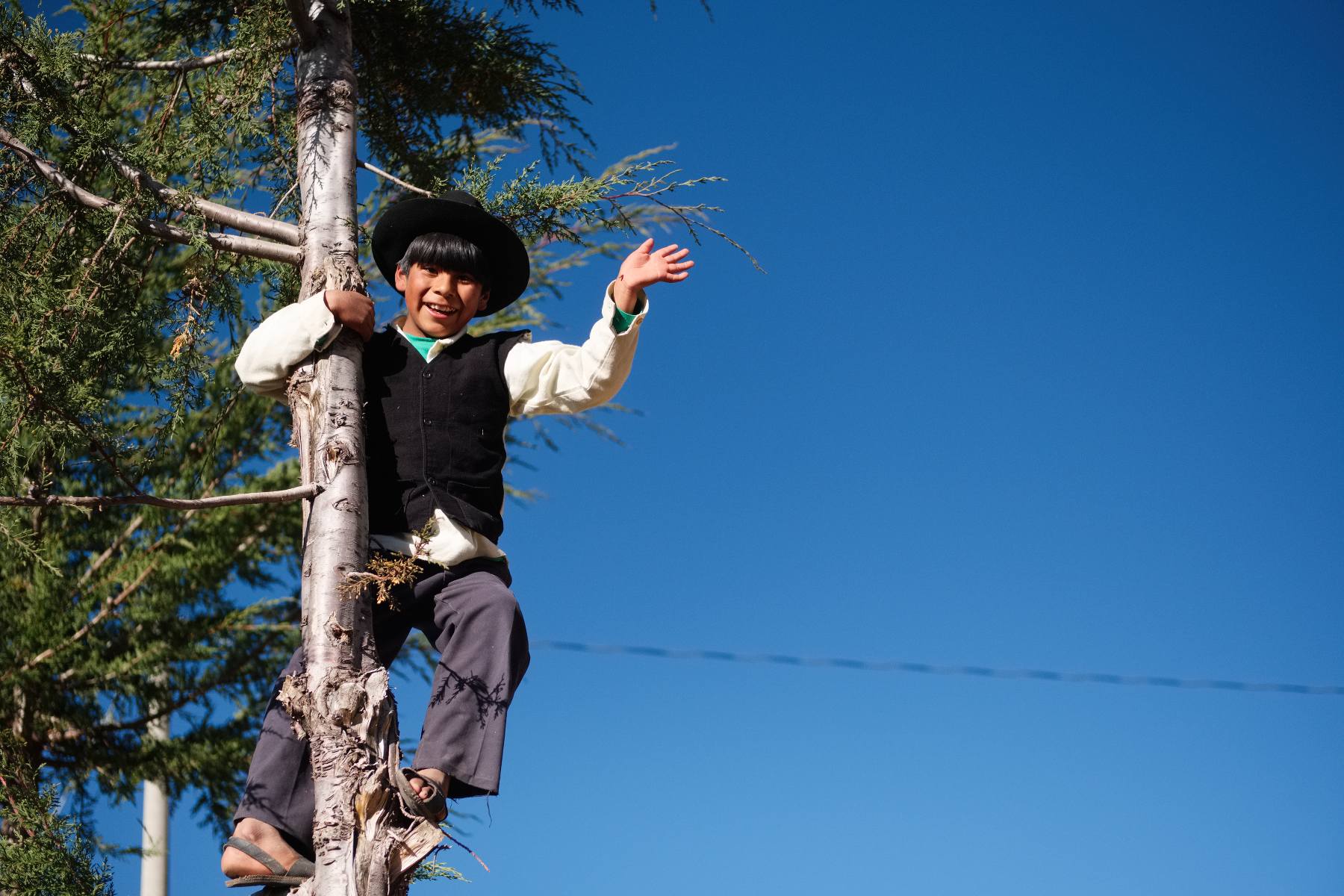 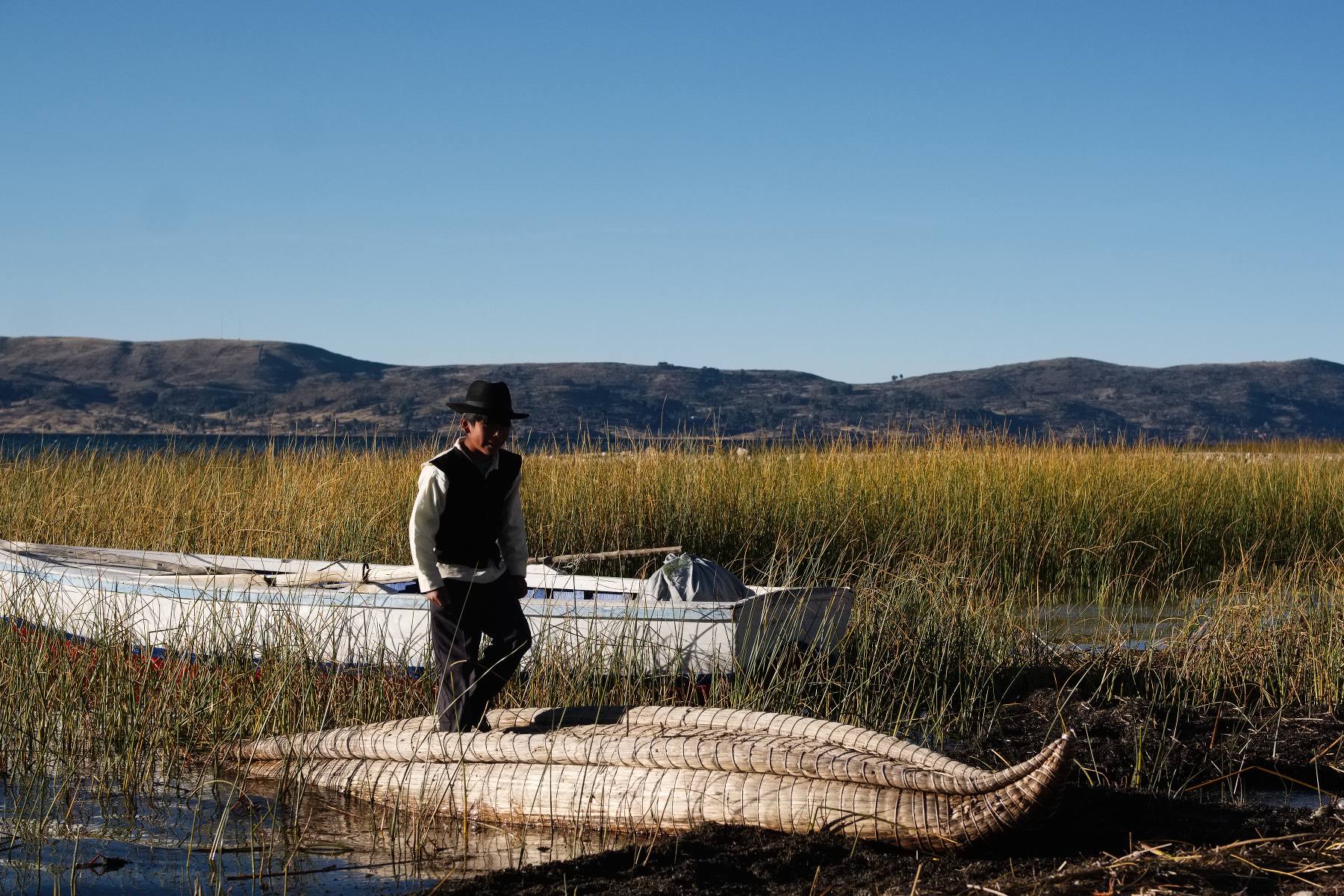 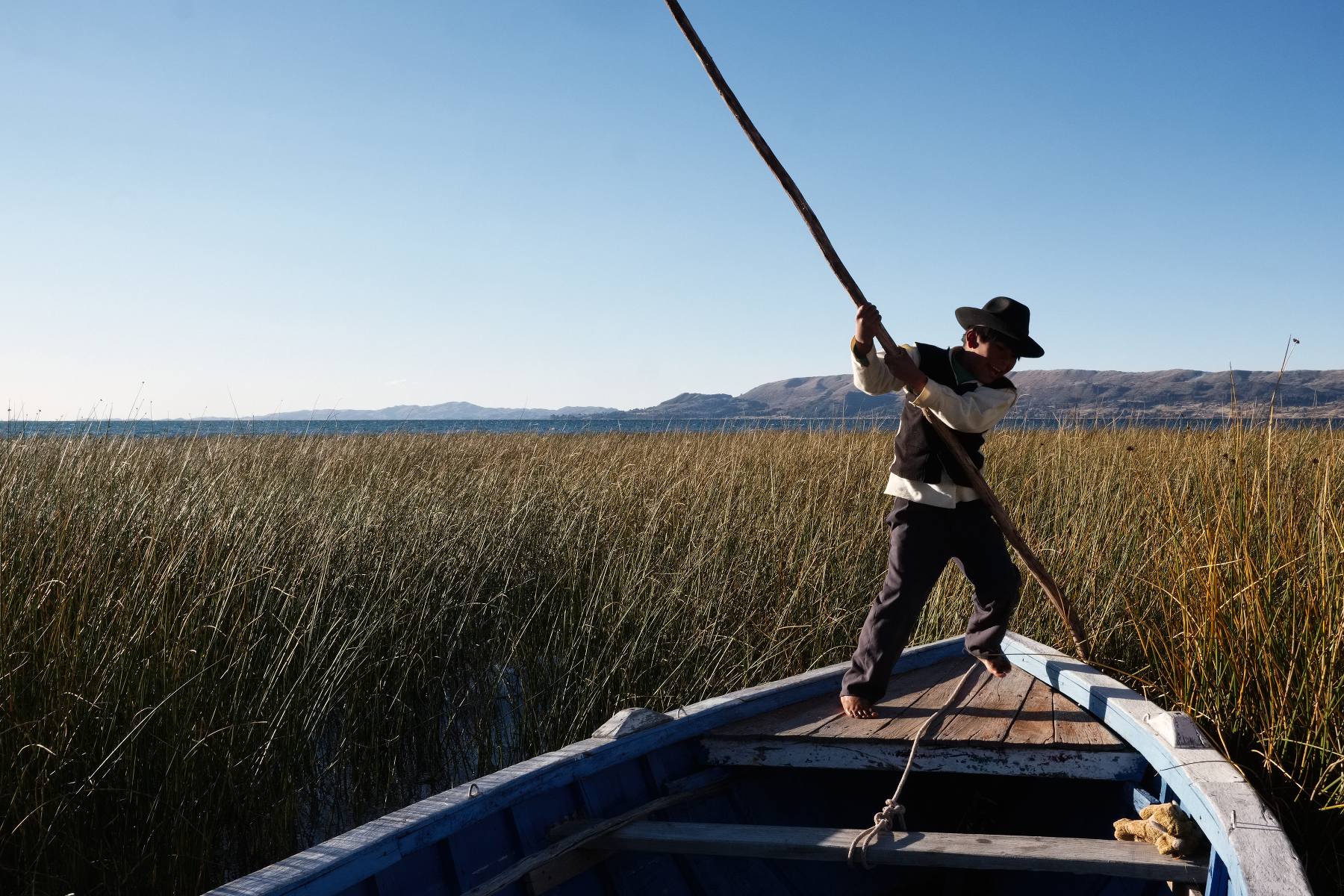 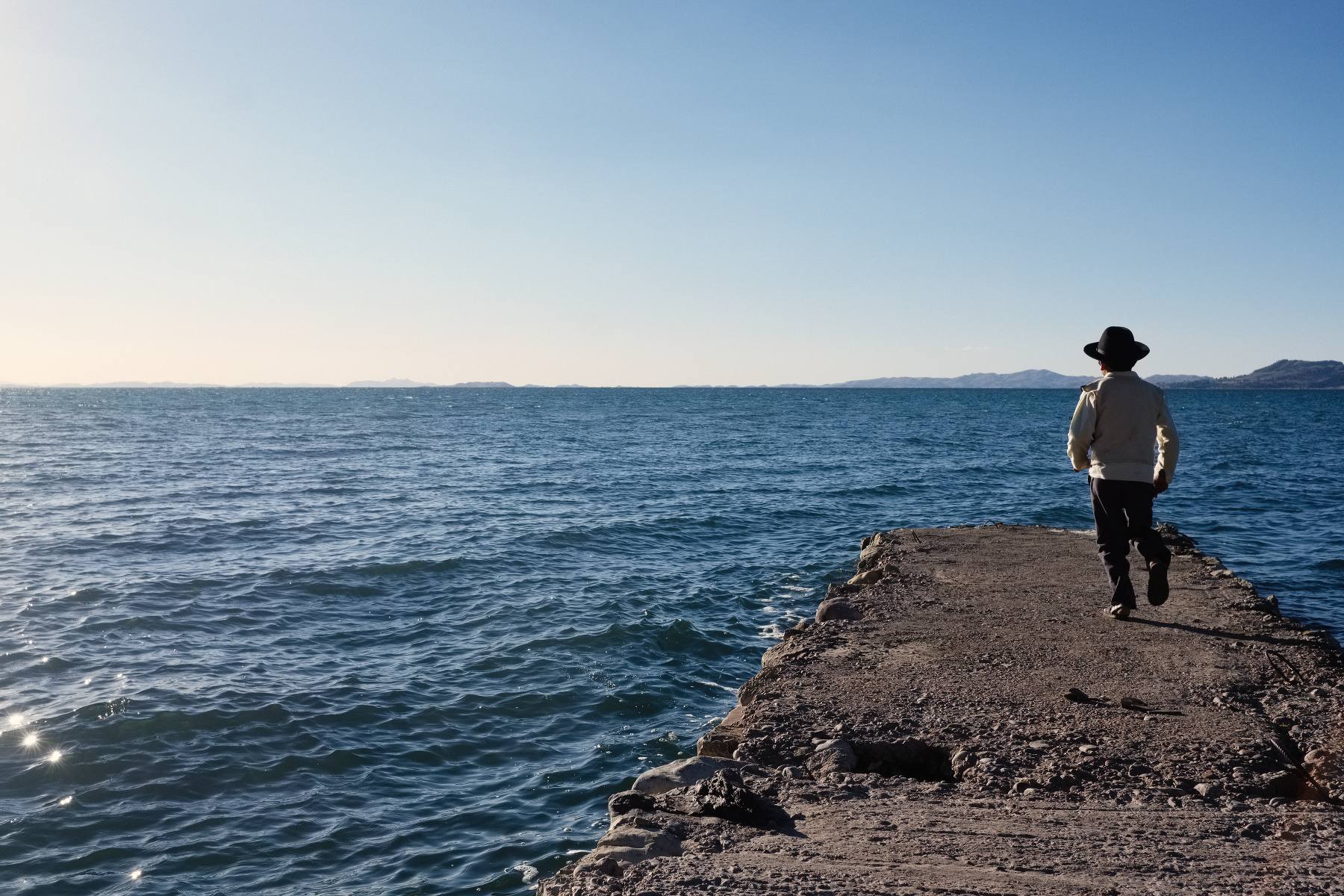 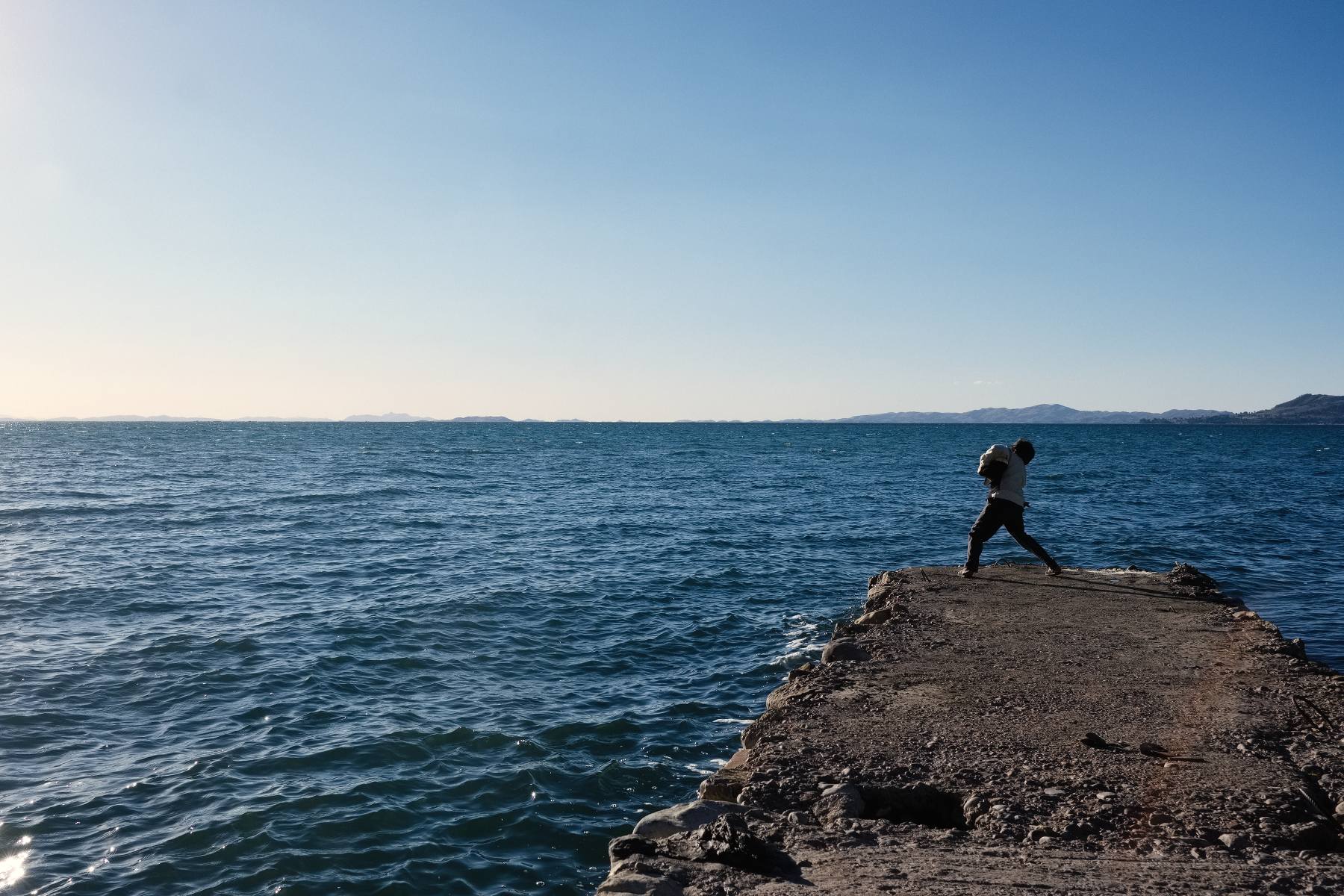 It’s possible that I’m responsible for introducing the art of stone skimming to the people of Titicaca…. ;-) 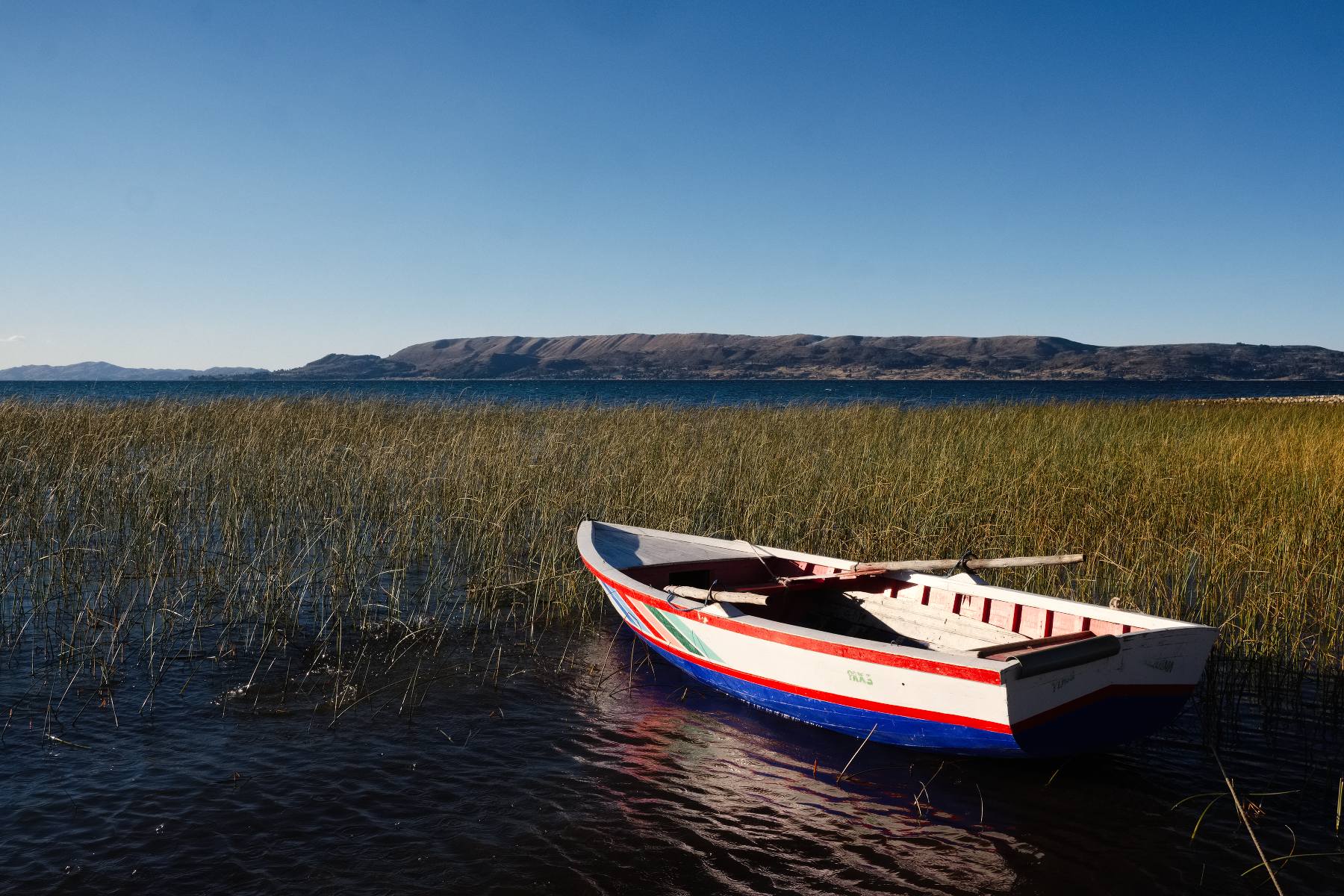 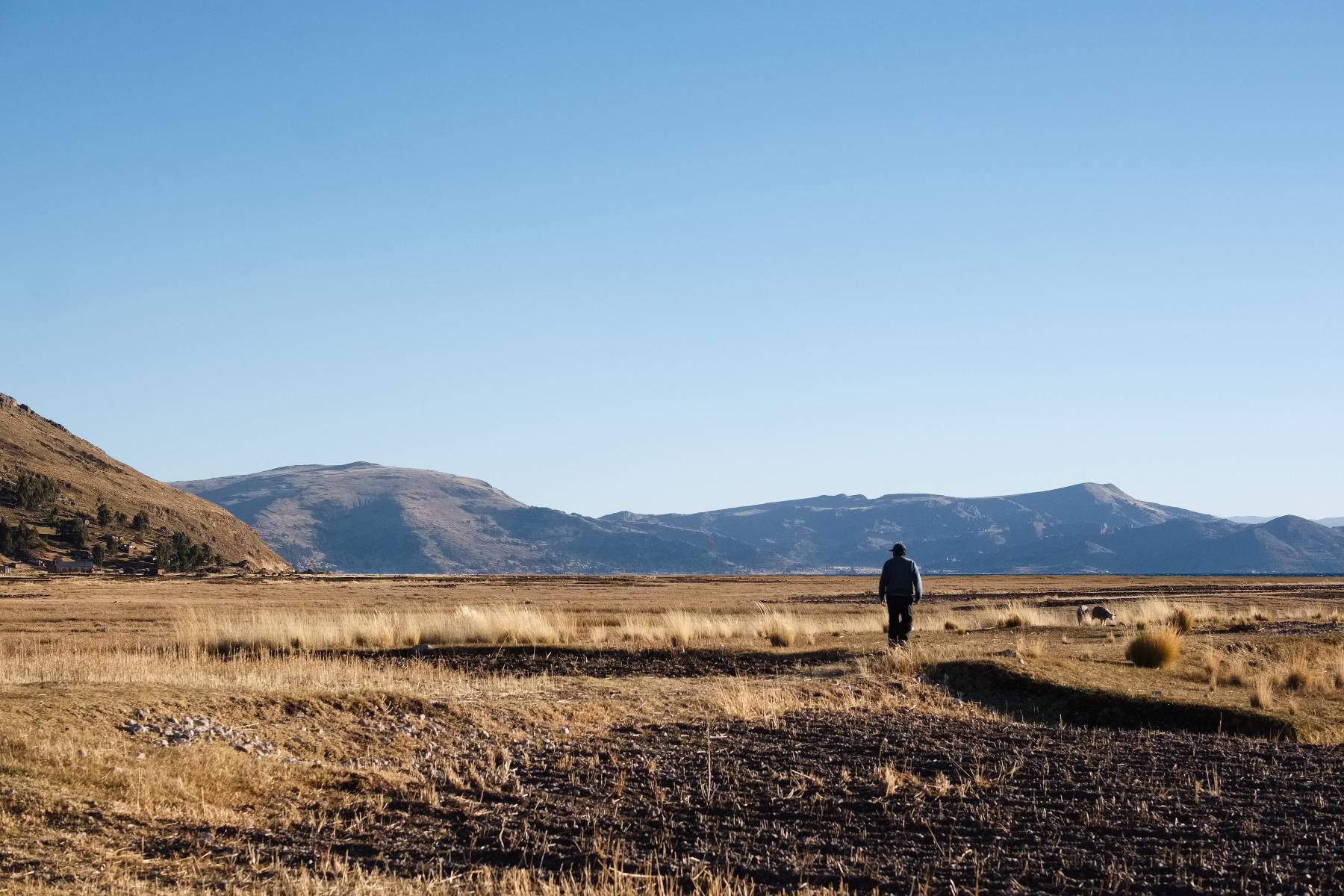 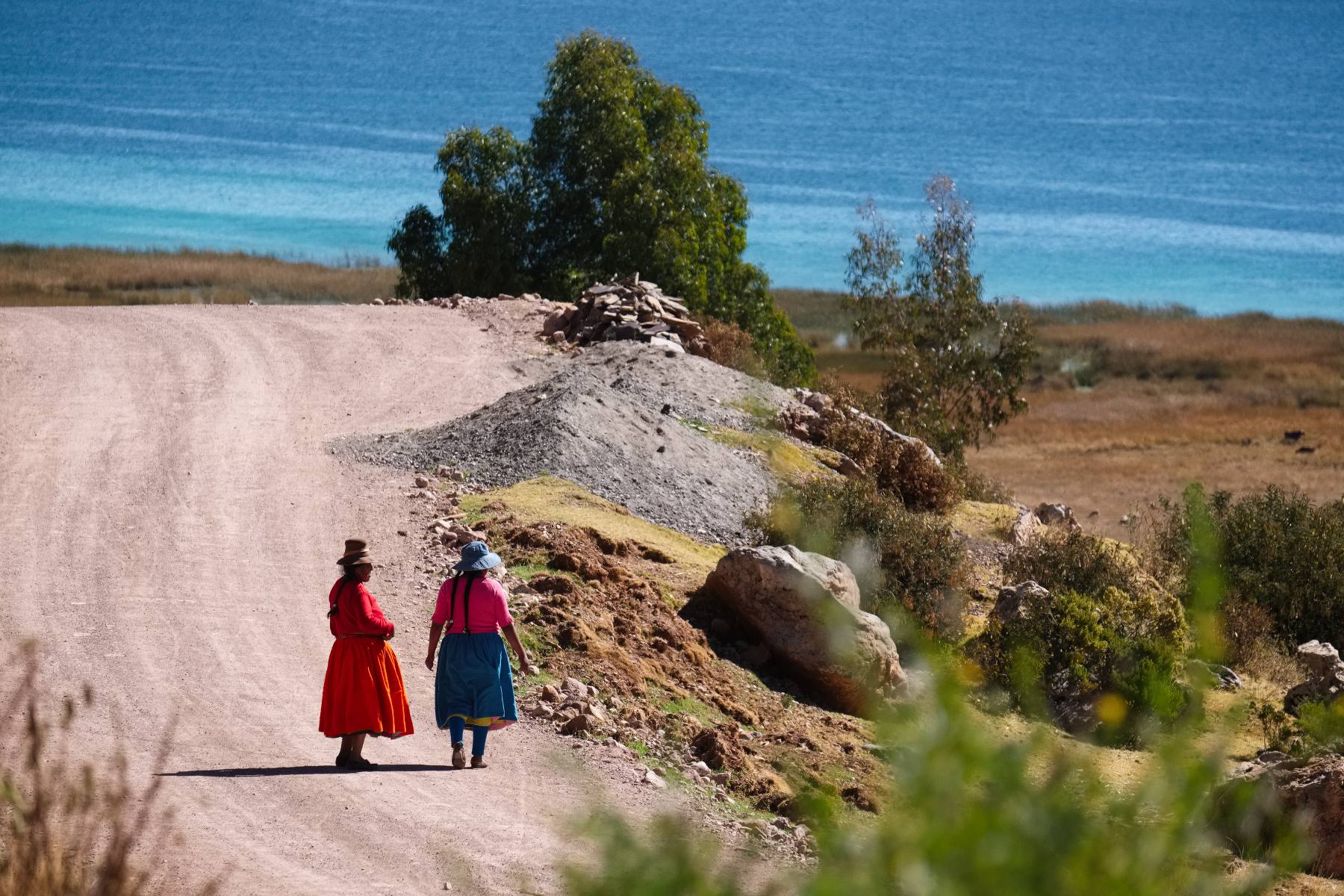 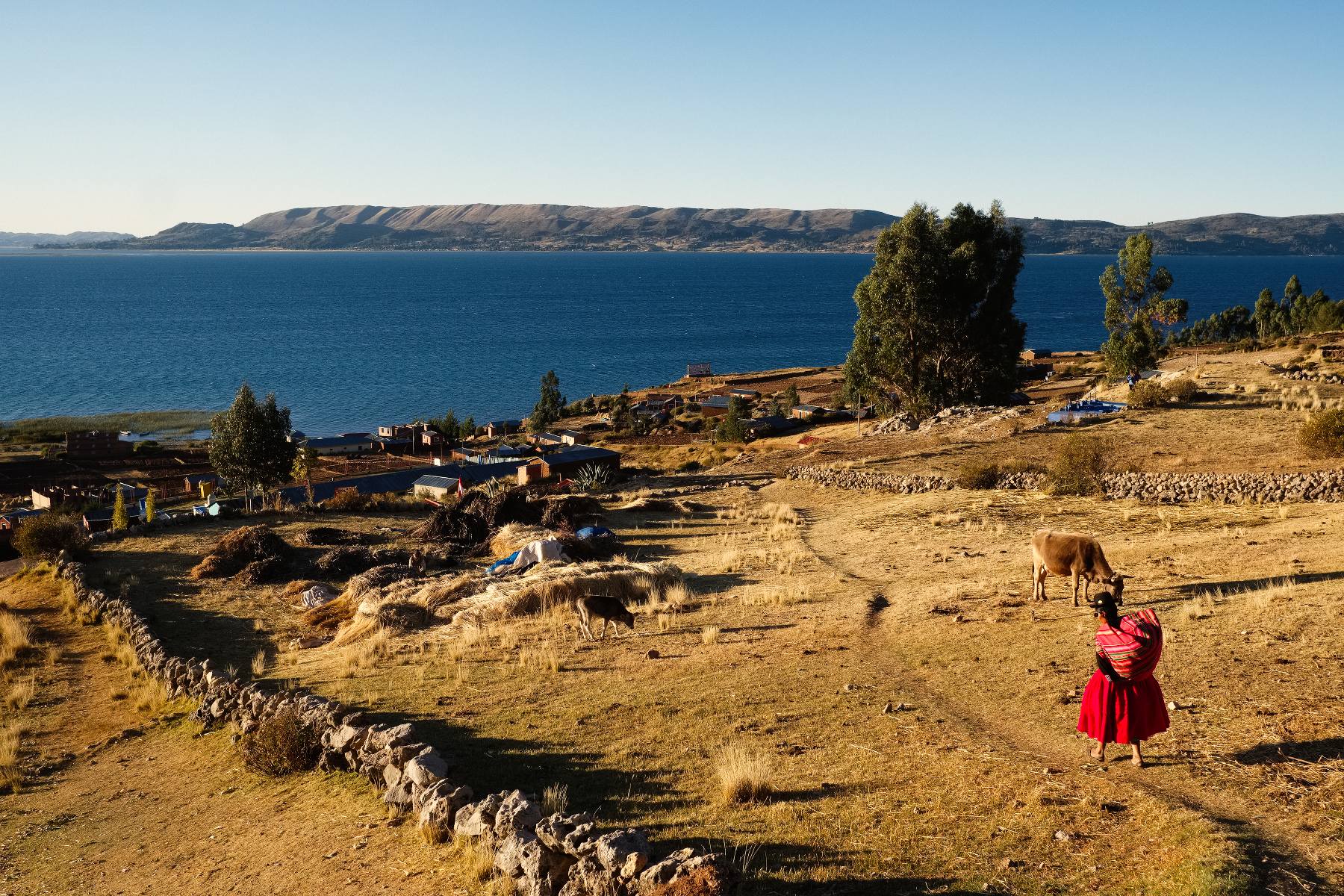 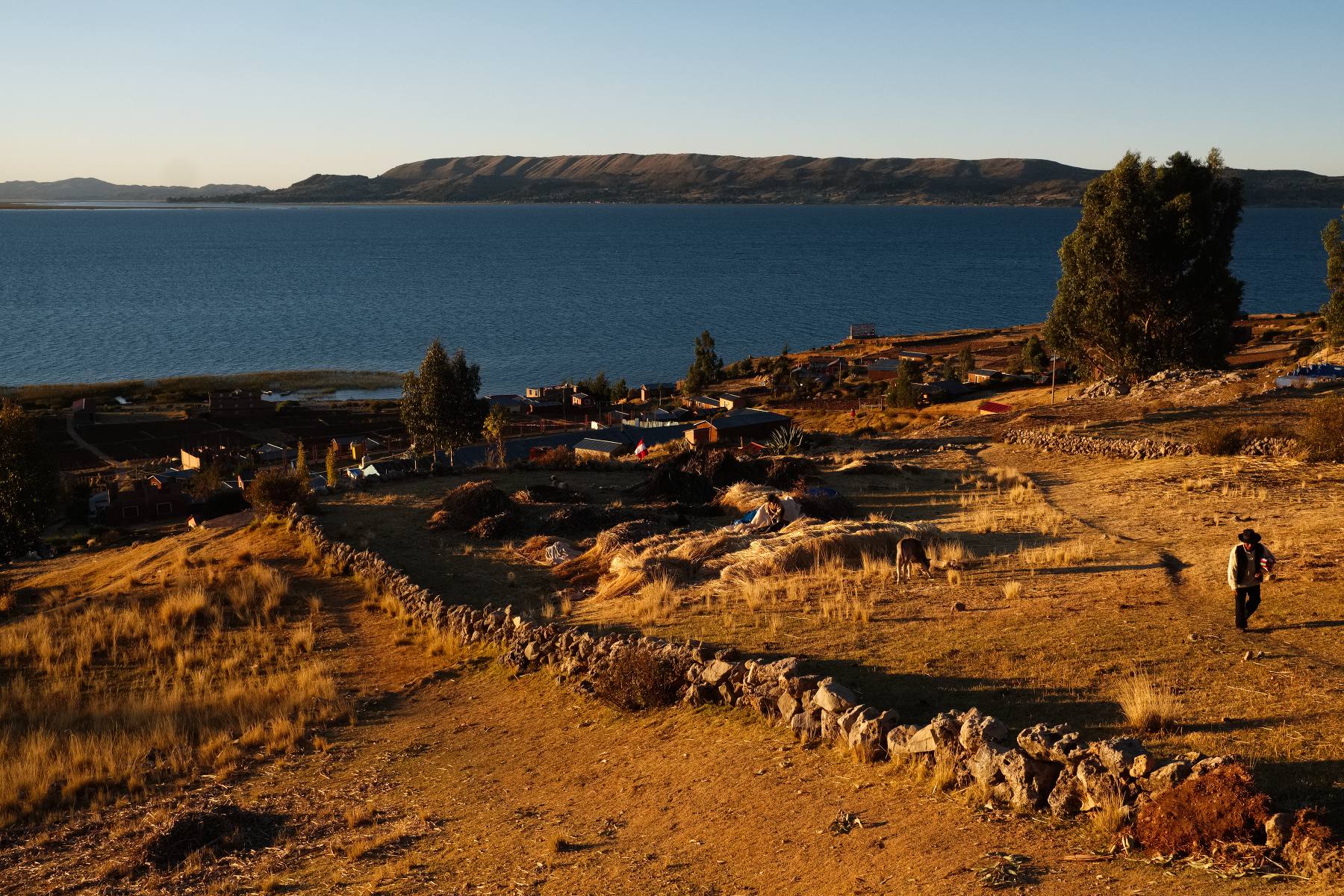 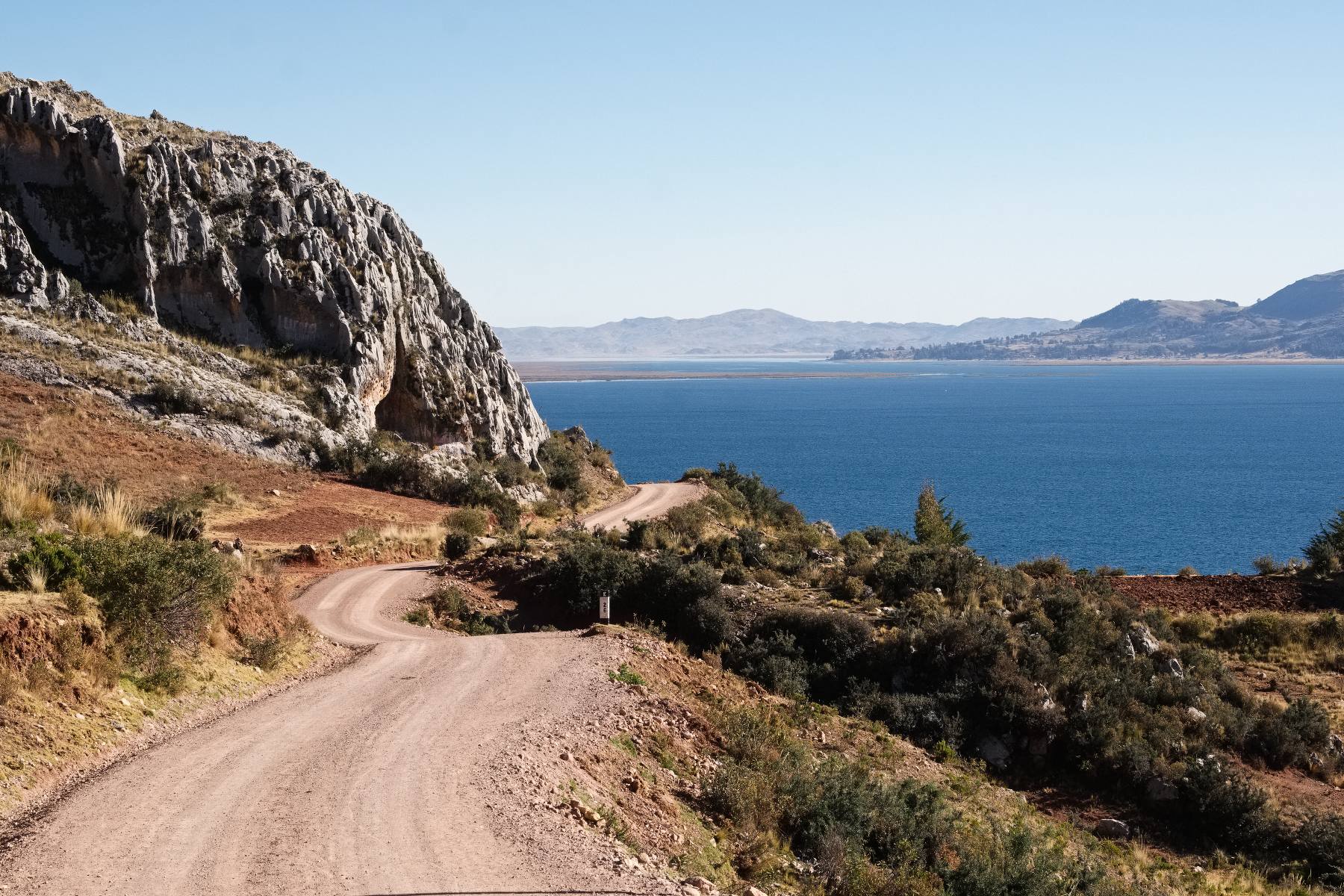 It was a beautiful, bright, but frosty morning when I left Luquina on a sublime track. 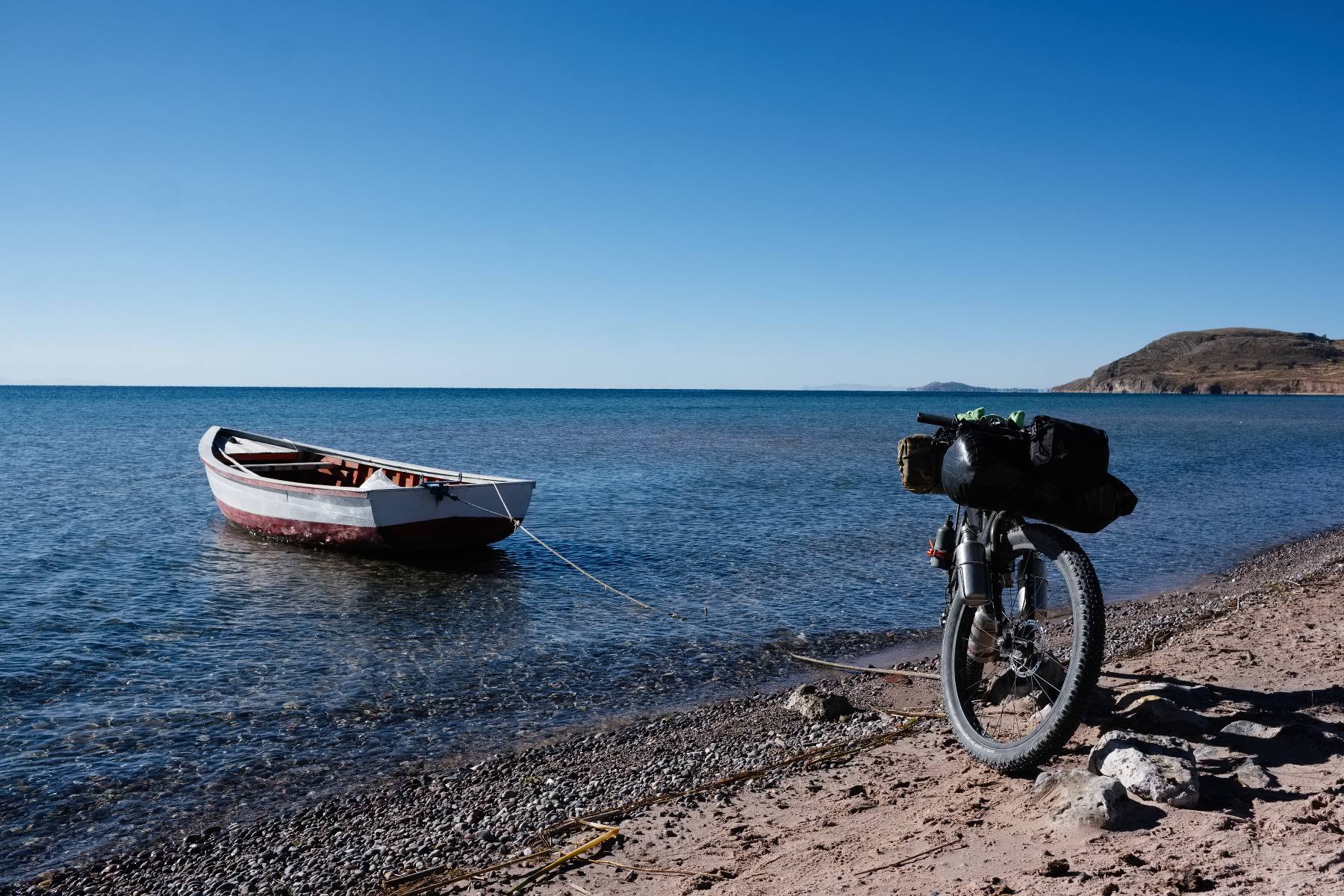 Titicaca has beaches, rather nice ones of fine sand. It would have been rude not to have visited. No signs of tourism at all, just an old chap herding his cows along the beach. 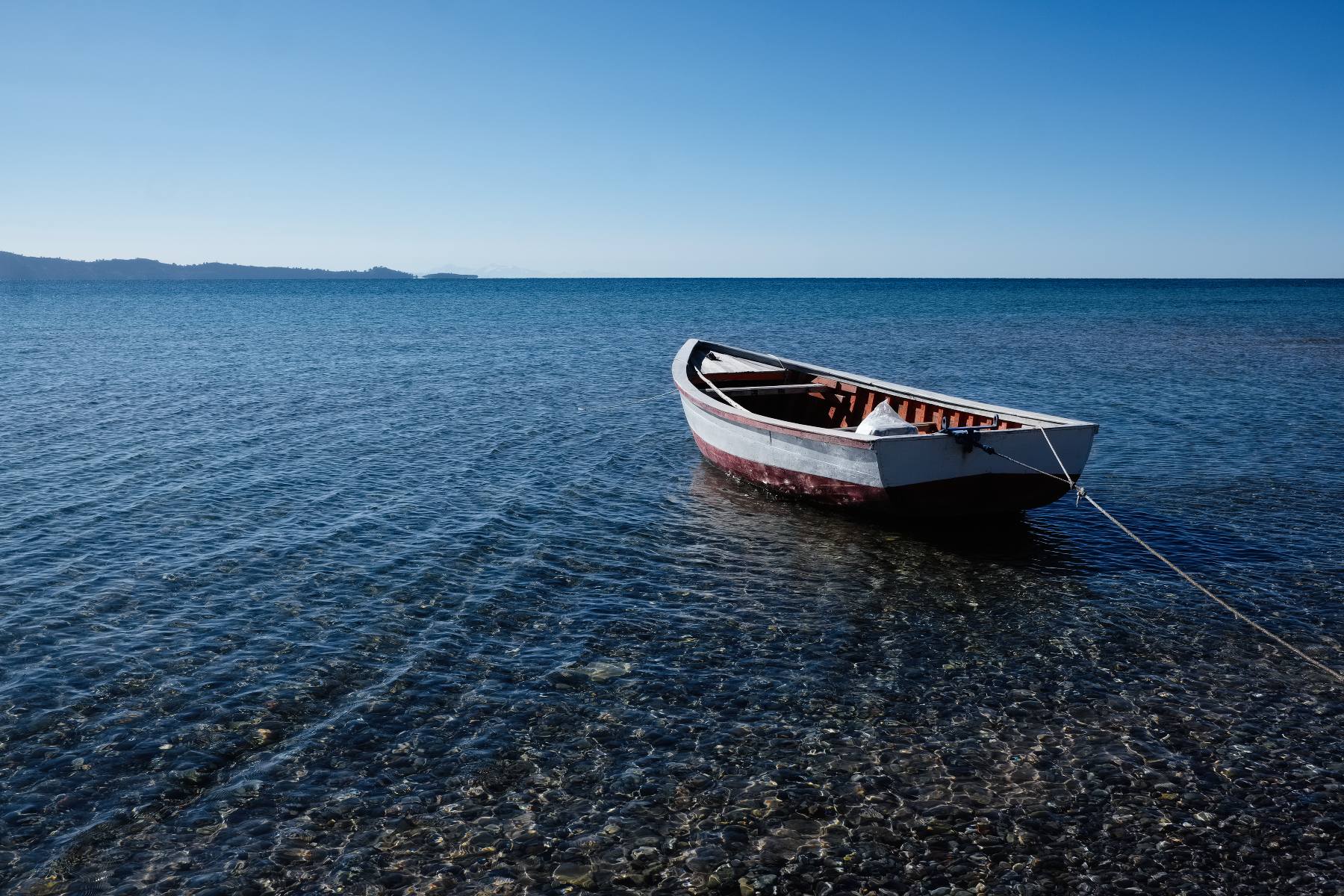 Titicaca, as with so many environments is under stress from pollution… still, the water is crystal clear and looks inviting… but it’s chilly and I’m just not hard enough… 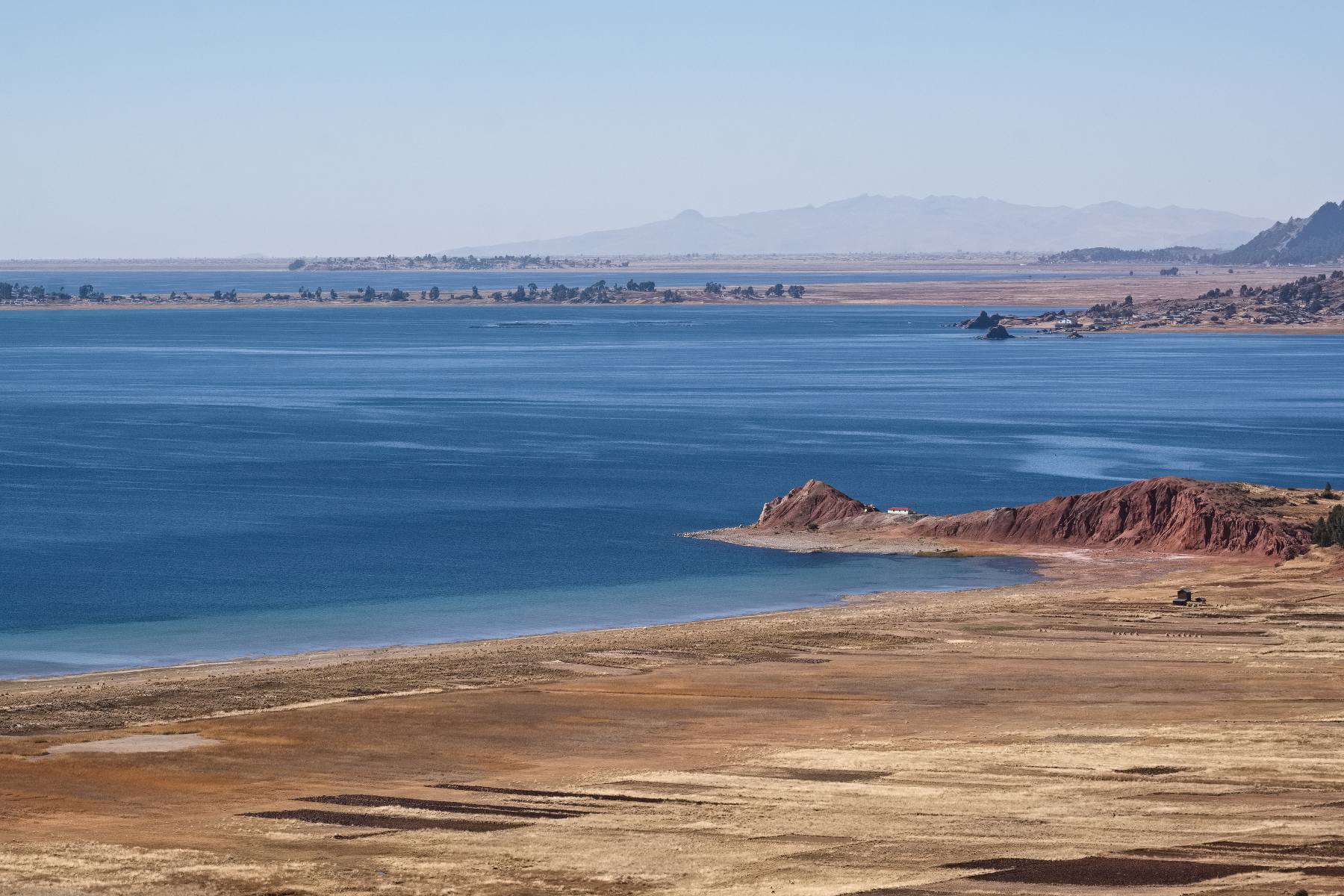 The landscape here reminded me an awful lot of the south cast of Crete around Kali Limines… the same dry hills and rocky outcrops, and sparking blue water. 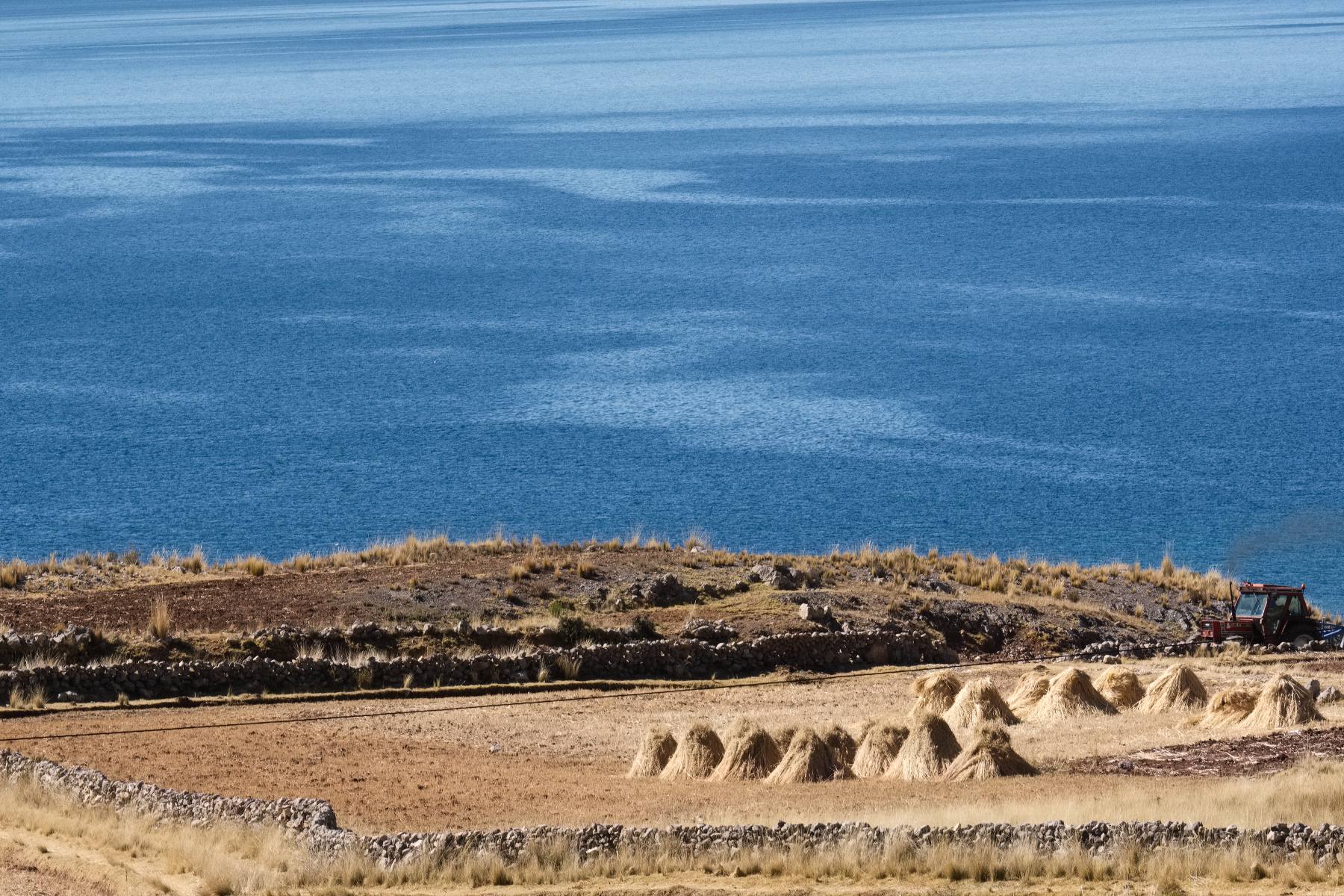 Sadly it was necessary to rejoin the main road south at the town of Ilave. The remaining 75km or so to the Bolivian border were something of a grim slog into a headwind on a wide, soul-crushingly dull asphalt road. I stopped for the night at Juli, some 90km from Luquina, and found it be the most unfriendly town I’ve come across in Peru. In part possibly it was just reserve however many of my ‘transactions’ seemed almost surly with the exception of the girl in the market from whom I bought cheese. It may not have helped that when I arrived in the plaza pretty much everyone was blind drunk. Not just a bit tipsy but practically legless. This weekend is Peru’s Independence Day holiday and it seemed that many were determined to start it early… the plaza smelled of beer despite the fresh breeze. I found a basic room for the night, and a bad lomo saltado for dinner. On the road at 7am the following morning I could not wait to leave despite the beautiful churches to look at, and made the exceedingly dull into-wind slog of 60km to Copacabana, just across the border in Bolivia, to arrive in time for lunch. At the border I converted my Peruvian notes into Bolivianos with a roadside money changer, and converted my remaining Peruvian coins into chocolate before smugly riding past the vast queue of cars and buses, and straight to immigration. 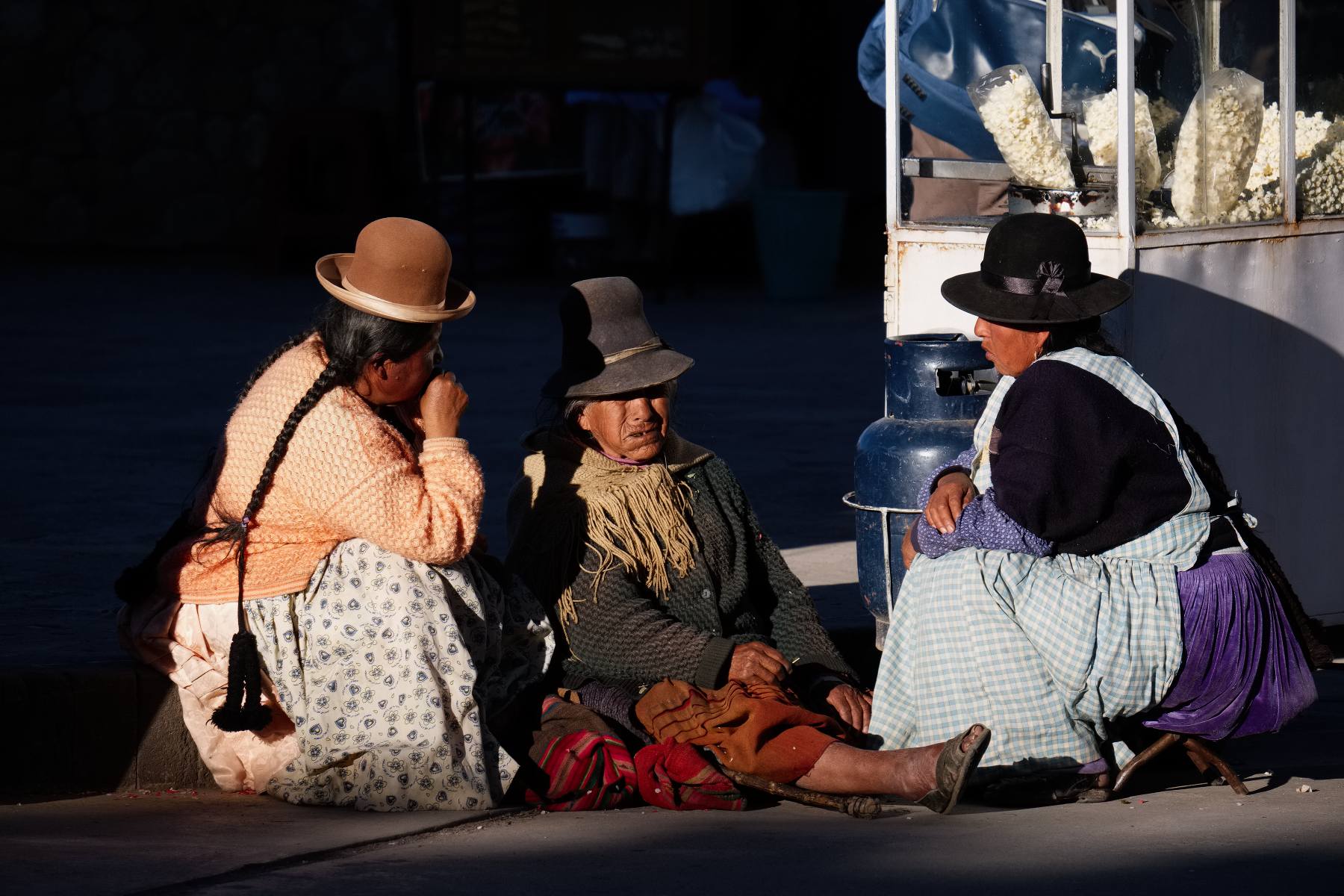 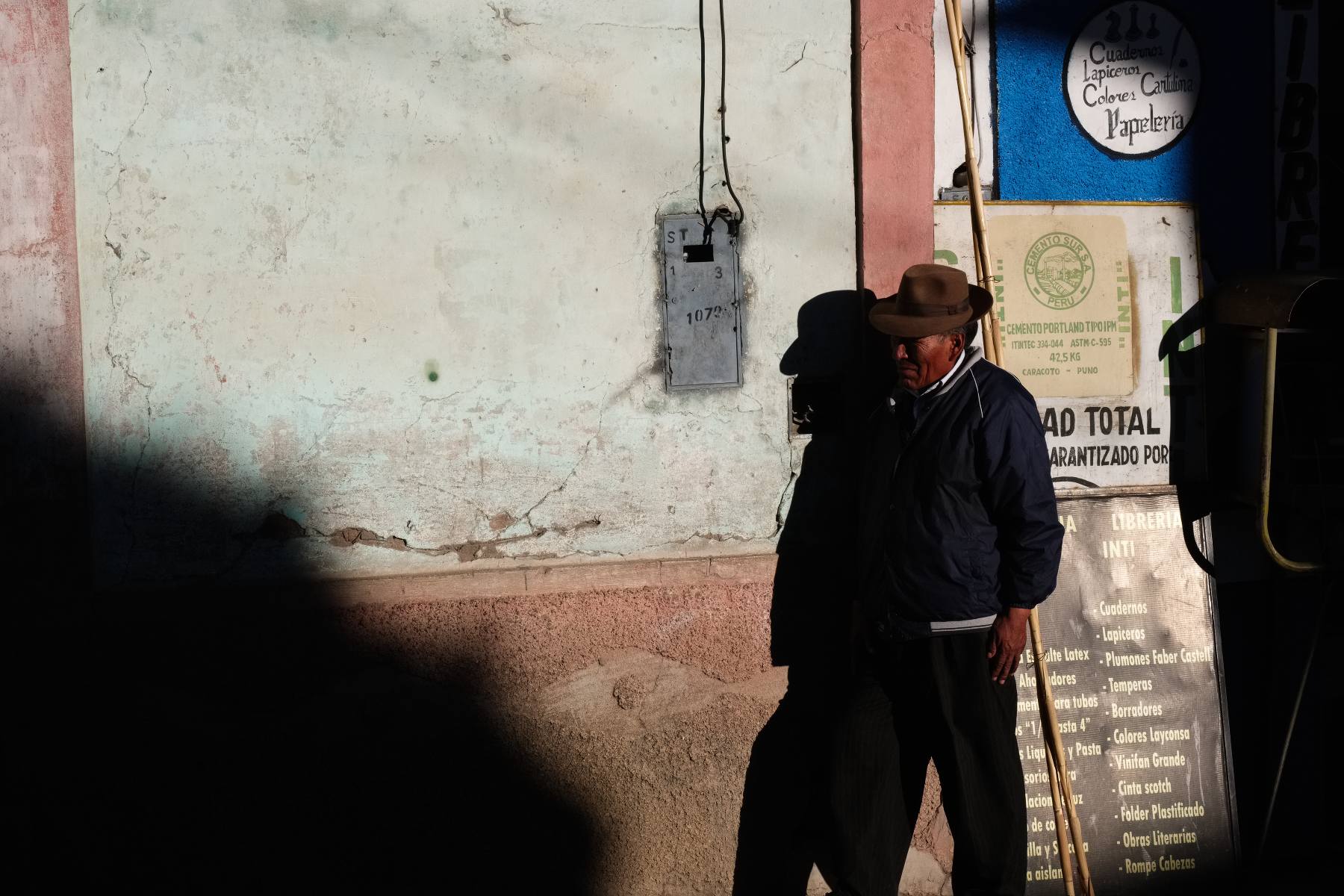 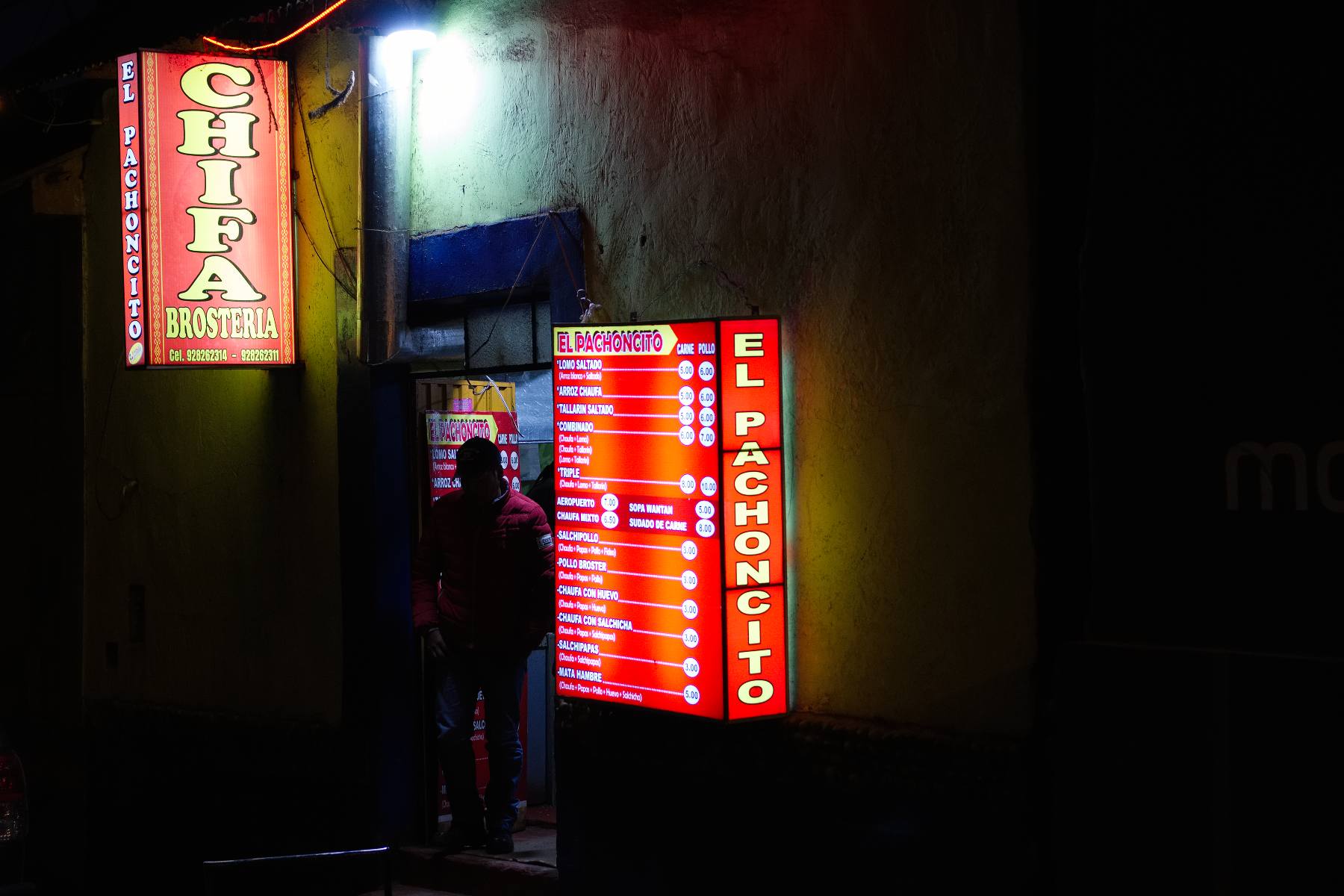