Jauja, pronounced “How-ha” is a small town in the central highlands east of Lima. Being just a seven hour bus ride from Lima, tiny by Peruvian standards, and sitting at an altitude of 3400m (11,200ft) in the fertile Mantaro valley it seemed like a good place to come and sit on my arse while acclimatising to the altitude and collecting my thoughts for the onward journey. 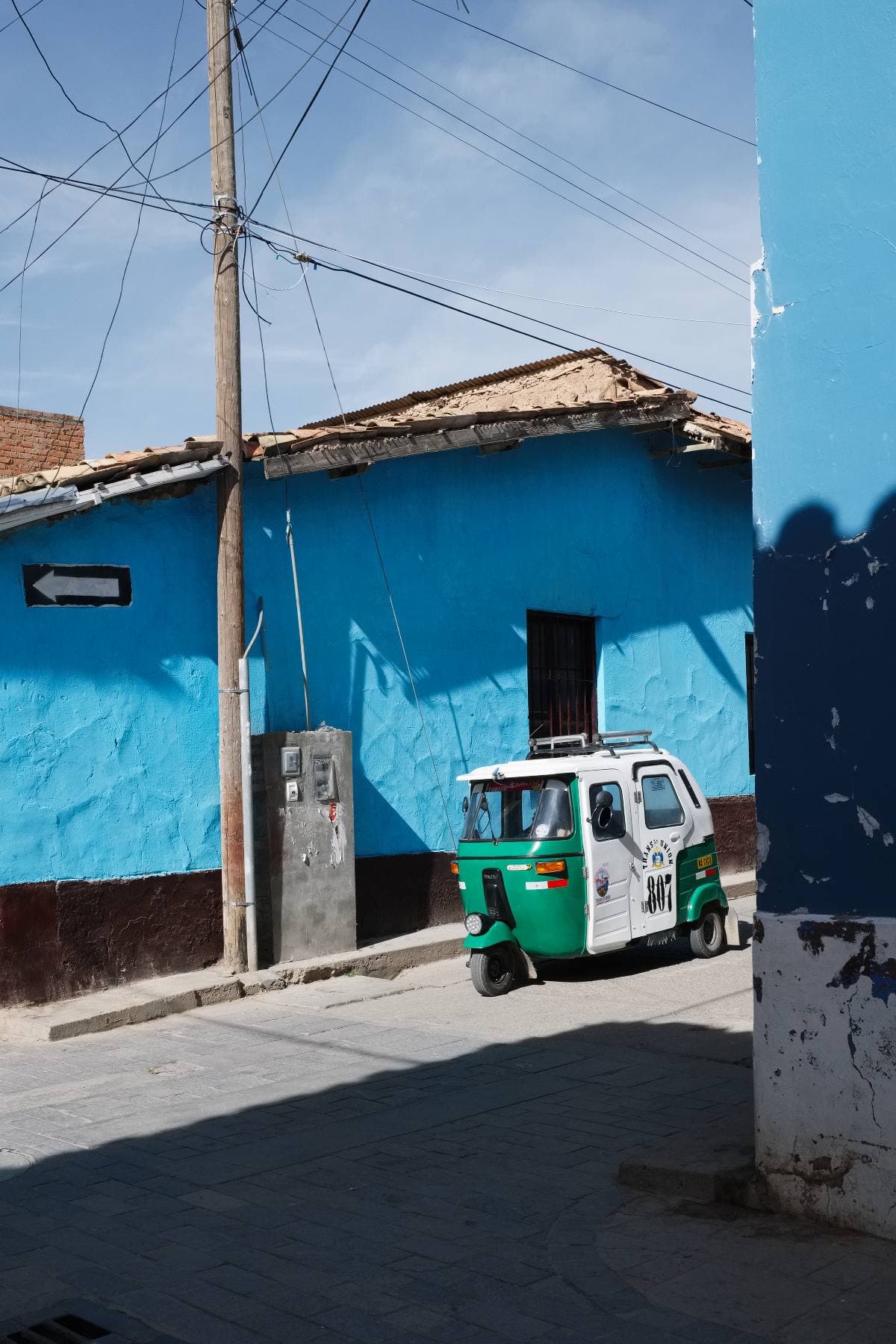 I did not know this until after I arrived but prior to the founding of Lima, Jauja was the capital of Spanish Peru. You wouldn’t know it now, I was the only person to get off the bus here, and there is no apparent tourism. As such it’s just an attractive, mellow, friendly hill town of about 15,000 people. The only downside I’ve yet found is the absence of decent coffee. It’s just not in the local culture and with no demand from visitors there’s little motivation for cafe owners to serve up anything beyond a weak powdered instant sort of thing. That aside, as a place to recover from the long trek from Cornwall it’s pretty good. There’s some decent food, a good market, and once I feel a bit less shagged, there are a few spots worth visiting in the surrounding countryside. I’ll put my bike together at the weekend and start with some short acclimatisation rides. The town itself is very attractive with narrow streets, traditional plaster-on-adobe buildings painted in an array of bright colours. The small commercial street is typically Peruvian in that it’s loud and busy with Latin American tunes vying with ’80’s western pop in the form of Wham or the Pet Shop Boys blasting out from the storefronts. 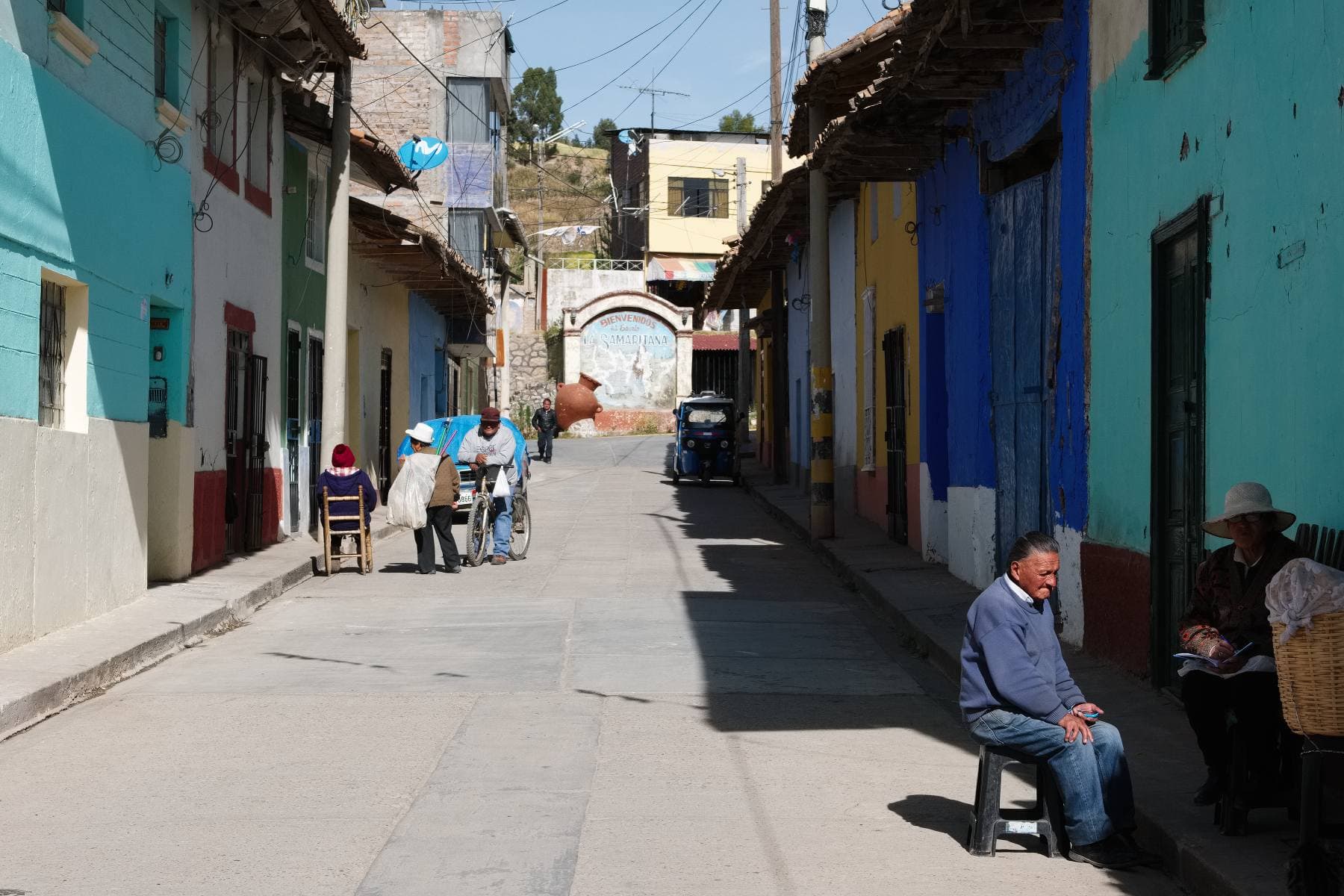 Sitting still is not really something I’m particularly good at, and the last couple of days have been quite hard. Feeling utterly shagged out it’s an opportunity for all the self-doubt and worry about the hardships that lie ahead to manifest itself. I lost some self-belief after the problems of the last two years and wonder if I can still handle arduous journeys of this flavour. There is only one way to find out however. In the meantime during periods of feeling thoroughly smashed there is one South American constant in which to seek consolation… Friends reruns on the telly. Years ago in Oruro, Bolivia, I suffered quite a nasty dose of food poisoning so I booked myself into the poshest joint in town at US$10/night and spent the next week half-asleep with reruns of Friends. Nothing has changed. 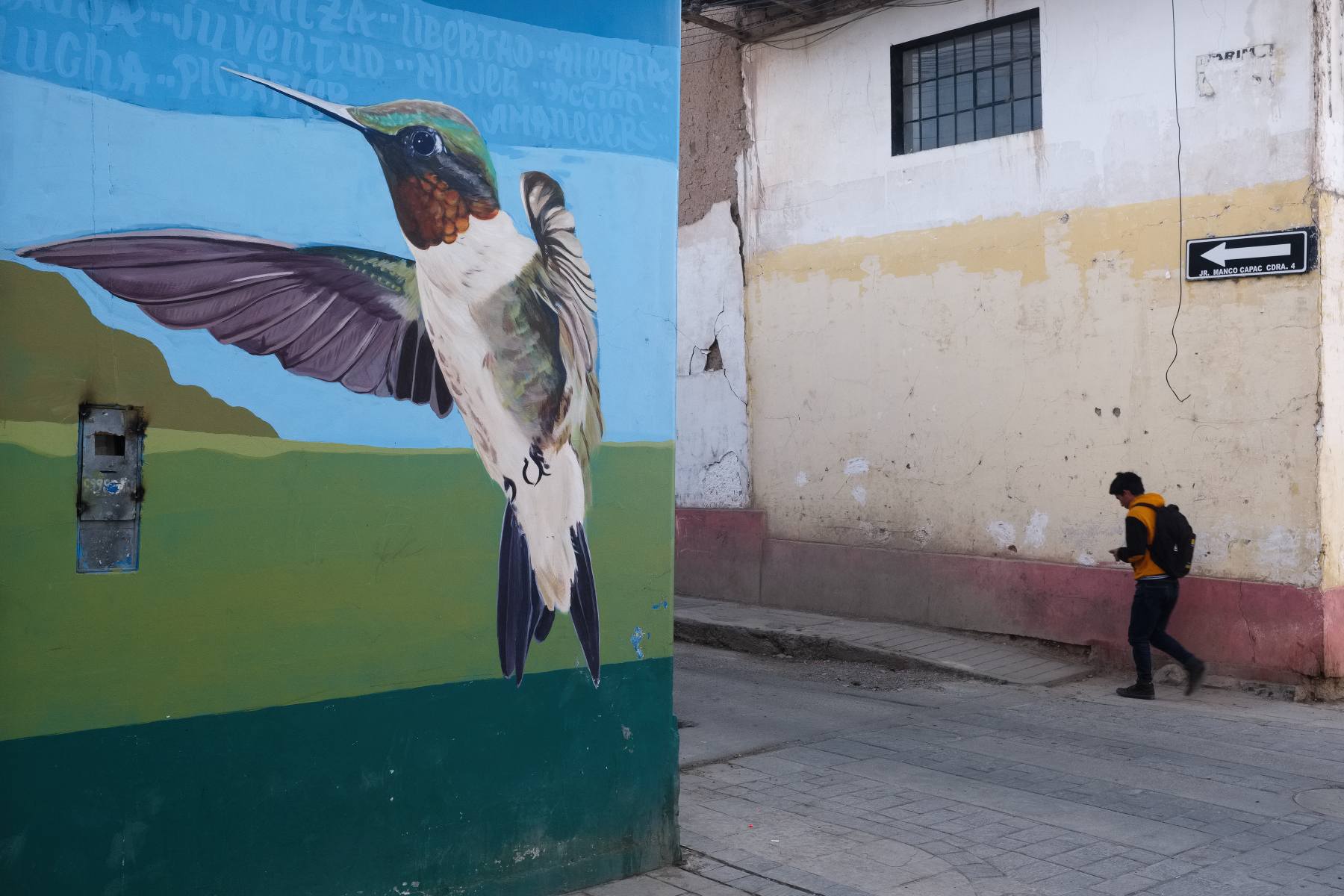 Jauja. I love the colour of these places, and wonder at the potential positive impact on mental health if towns in the UK were a little less “beige” (or grey, or white), particularly during the winters. Having said that I imagine a mural such as this would be quickly defaced at home.

I imagine I’ll be here at least until Tuesday or Wednesday next week. The trail goes straight up to 16,000ft from here so time acclimatising and recovering properly here will be time well spent. There’s also work to be going on with, and I expect there’ll be a few more pics at some point too. 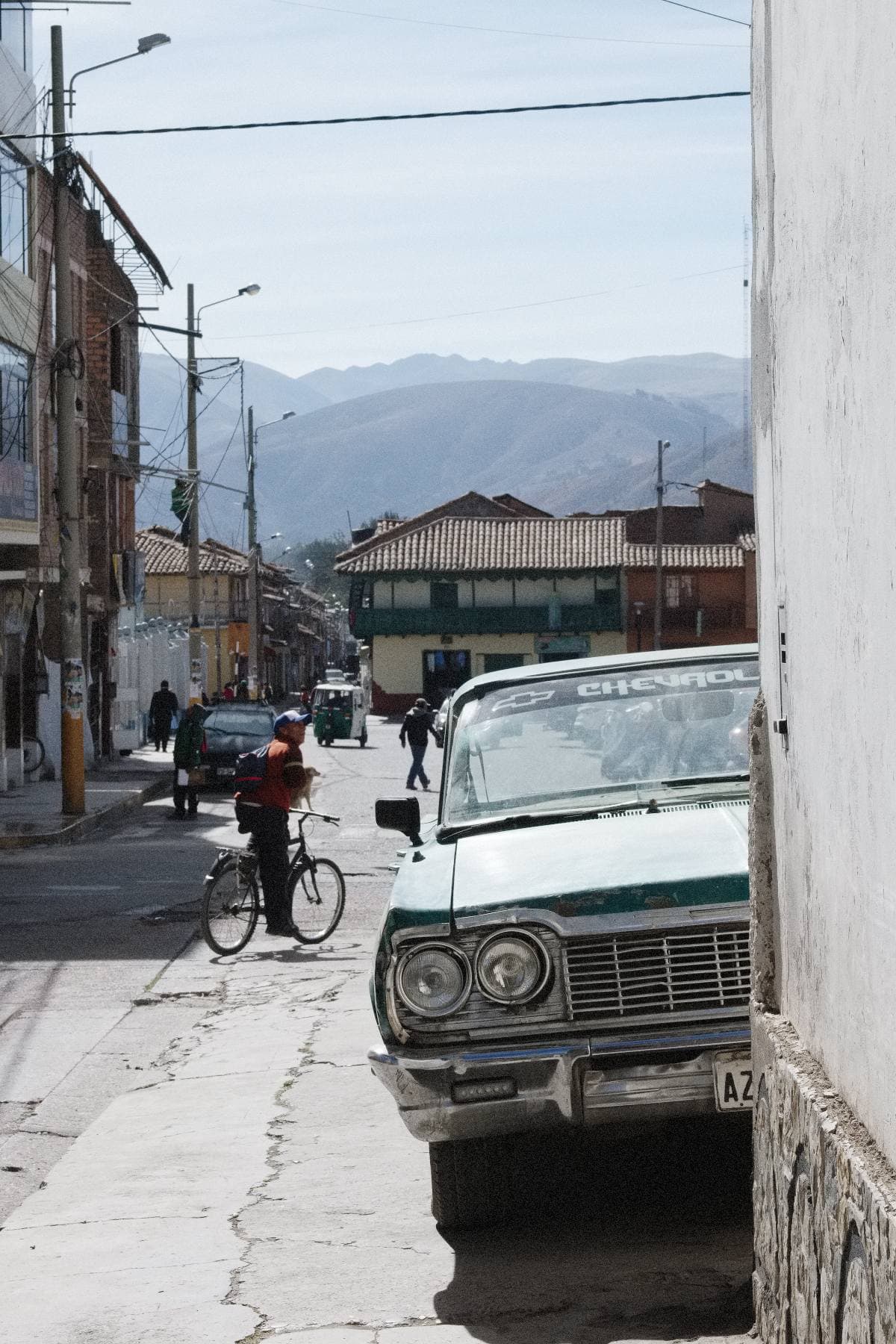 Jauja. Peru is mostly the domain of Japanese vehicles but there are one or two examples of vintage Americana kicking around such as this super-tanker sized, battered old Chevy… 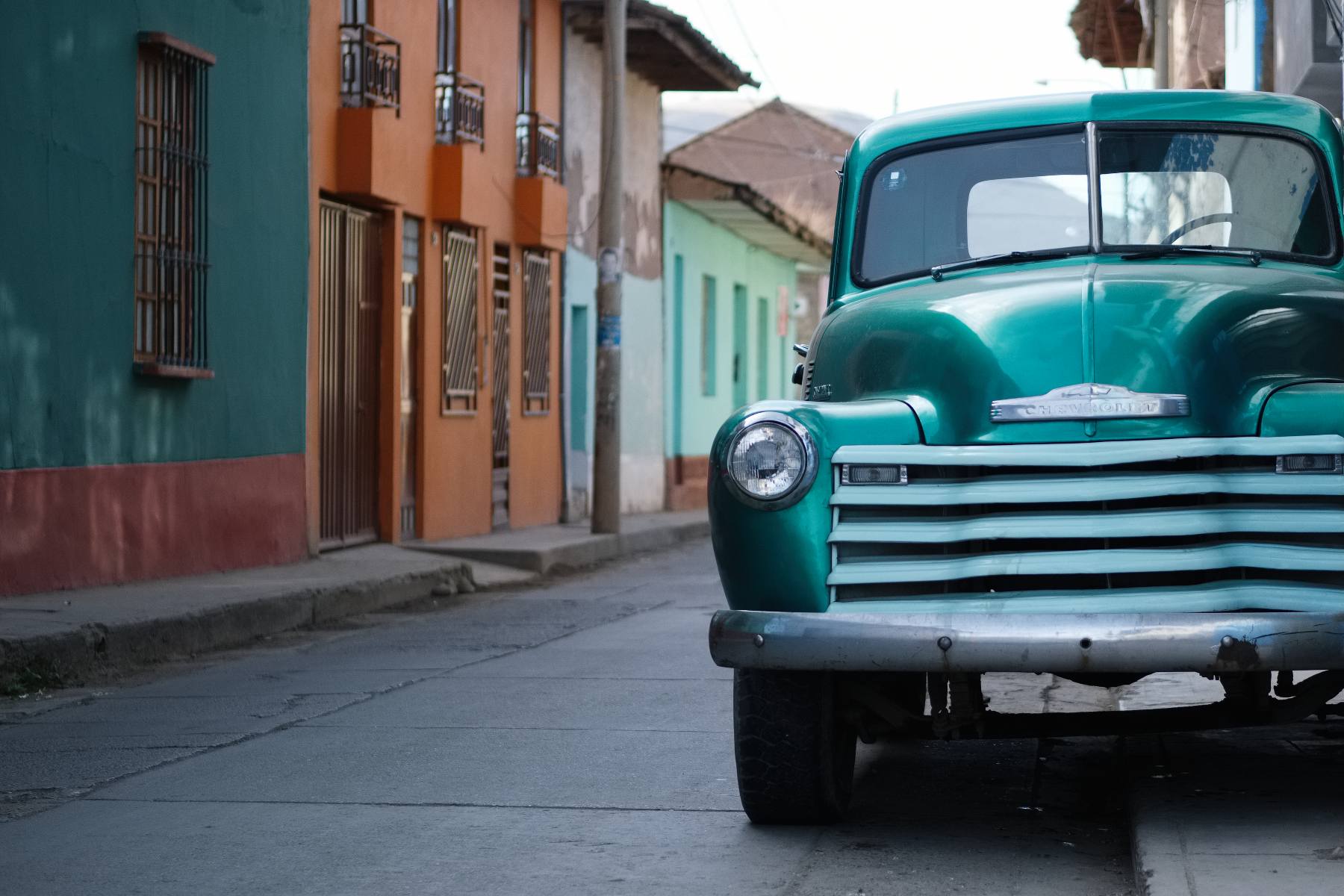 .. and this rather wonderful Chevy pickup truck. 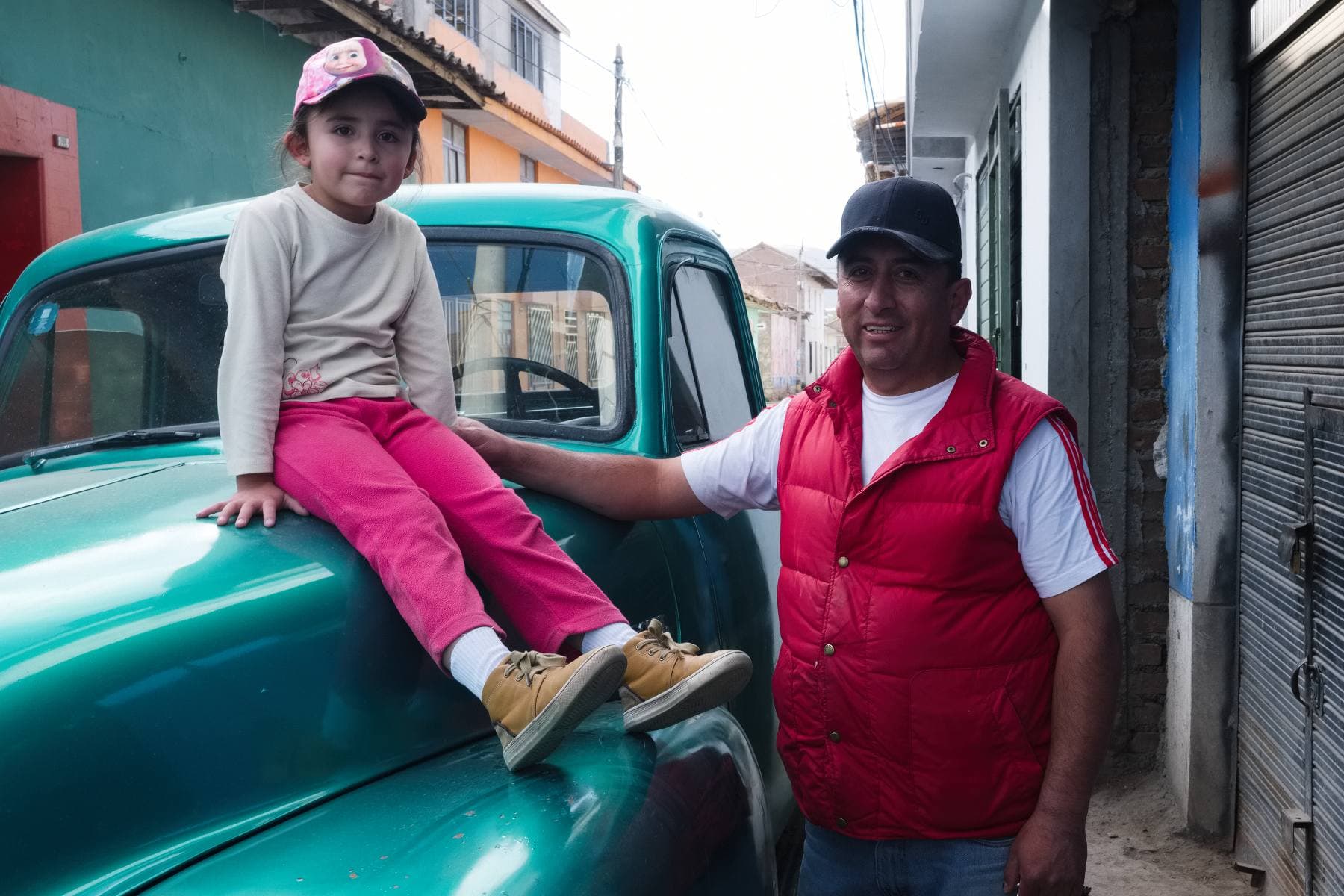 Here’s the owner and his daughter. A super chap. They were on their way somewhere so I didn’t want to mess around with setting up a nice portrait. It’s a nice snap however I think. Jauja being the small town it is I occasionally see them out driving around and always get a nice wave which is great, makes me feel at home. 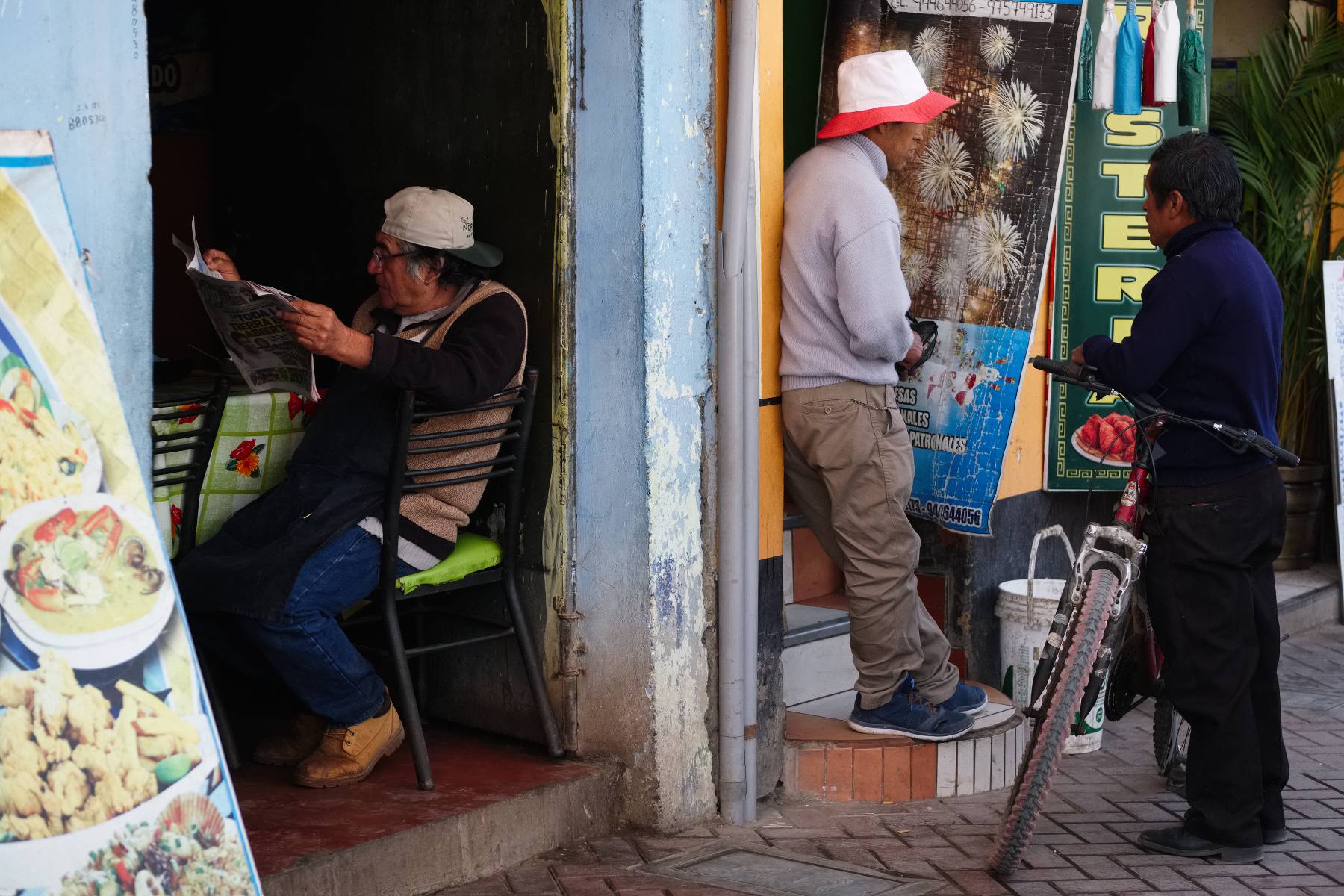 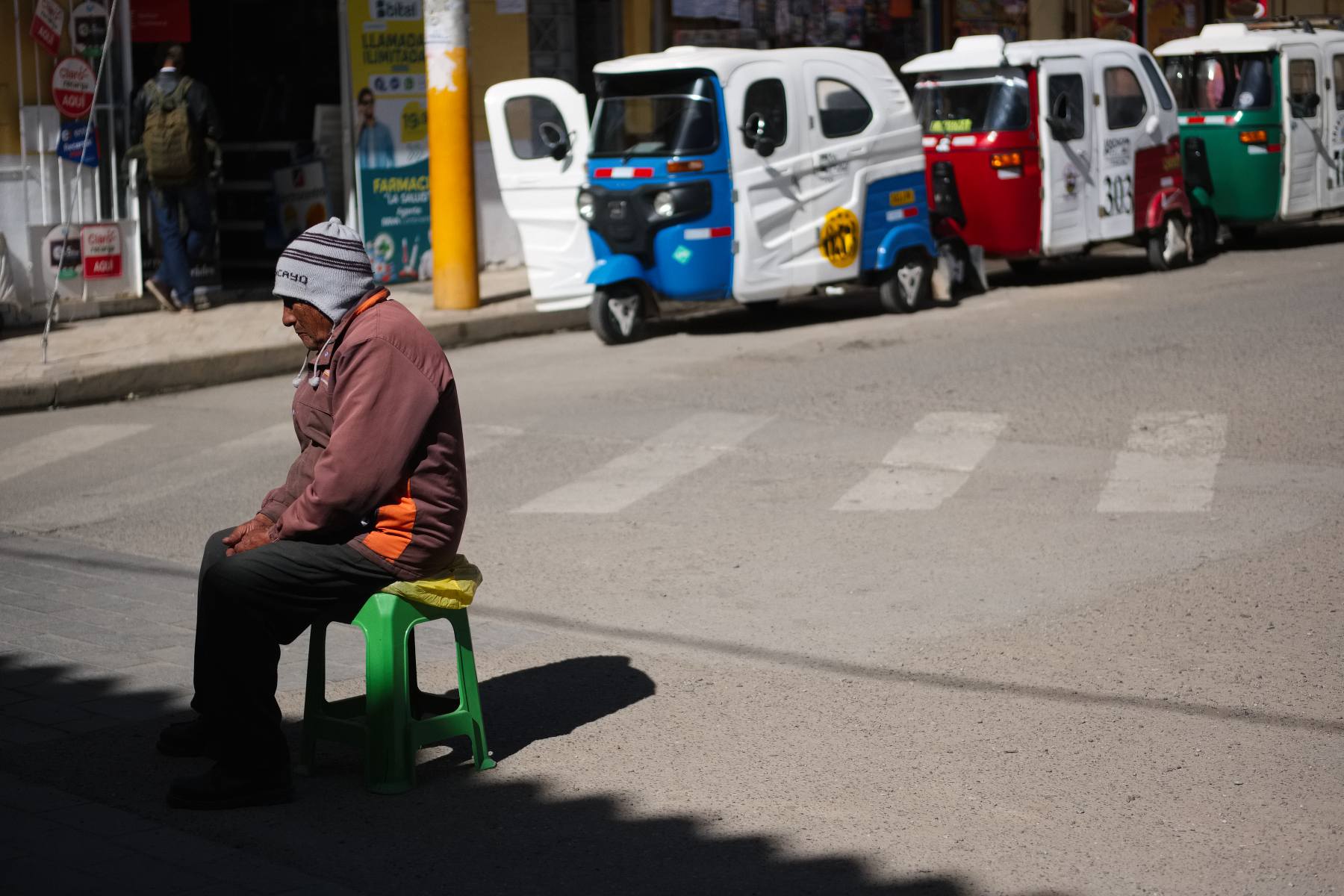 Jauja. Getting some early morning warmth into old bones. 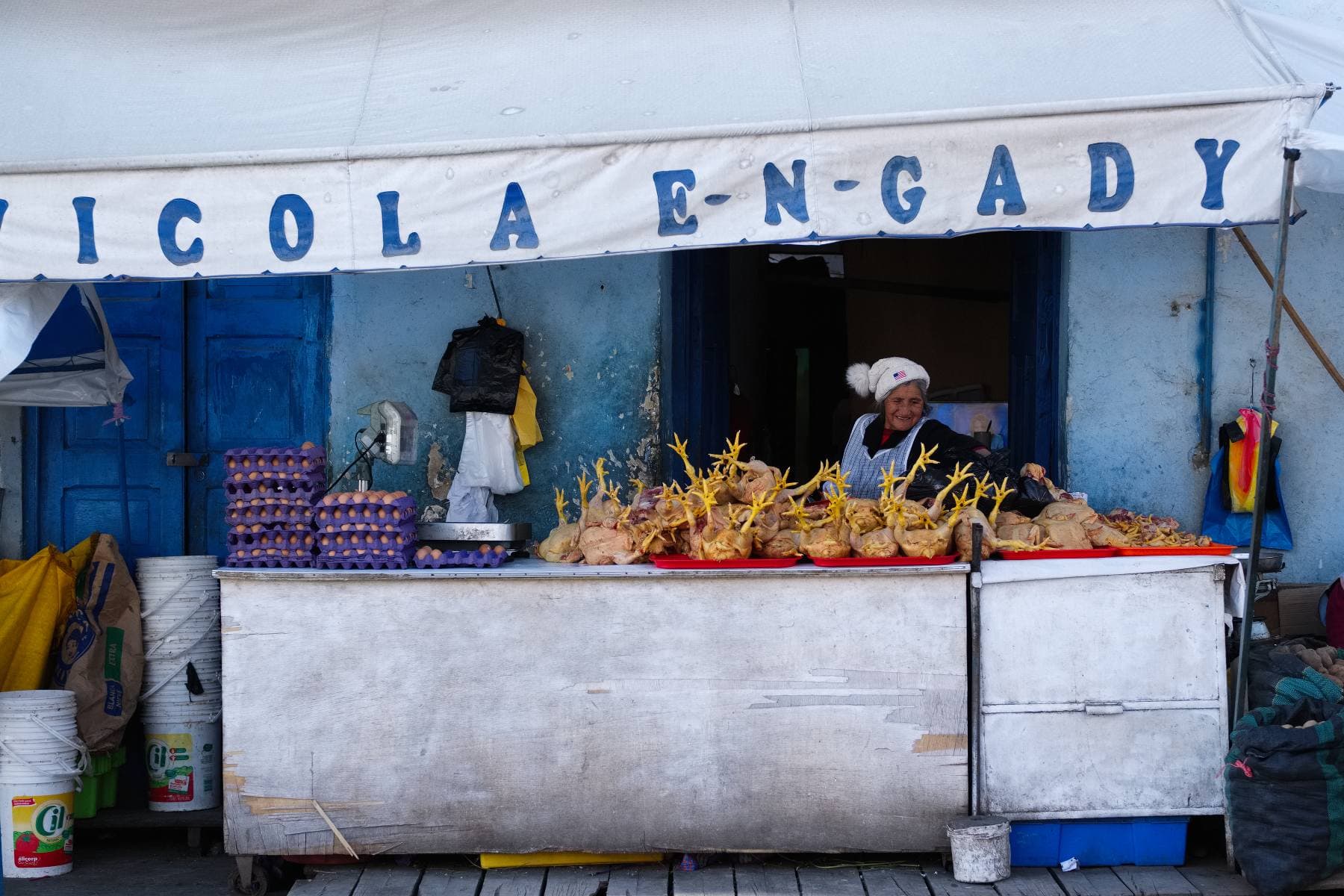 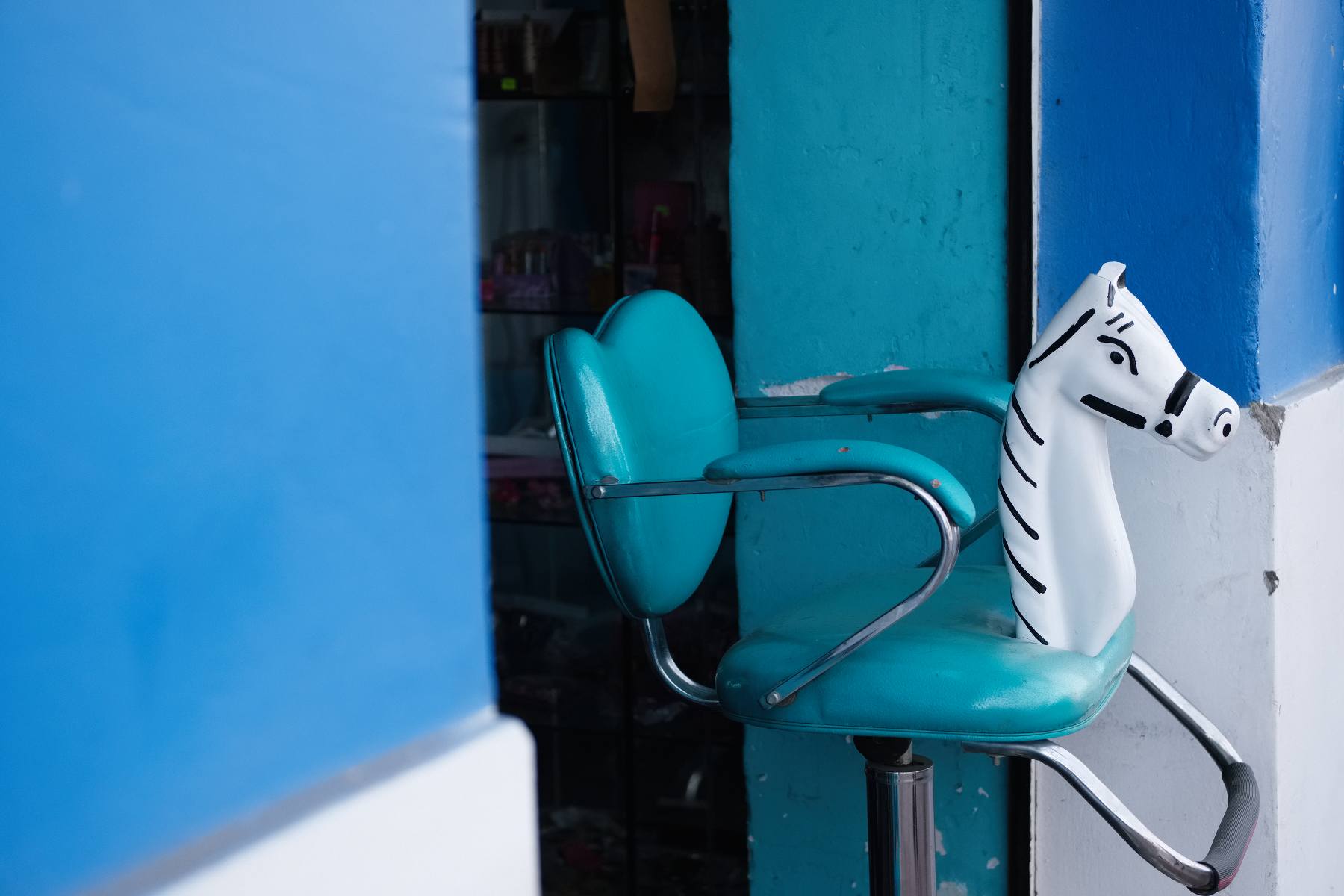 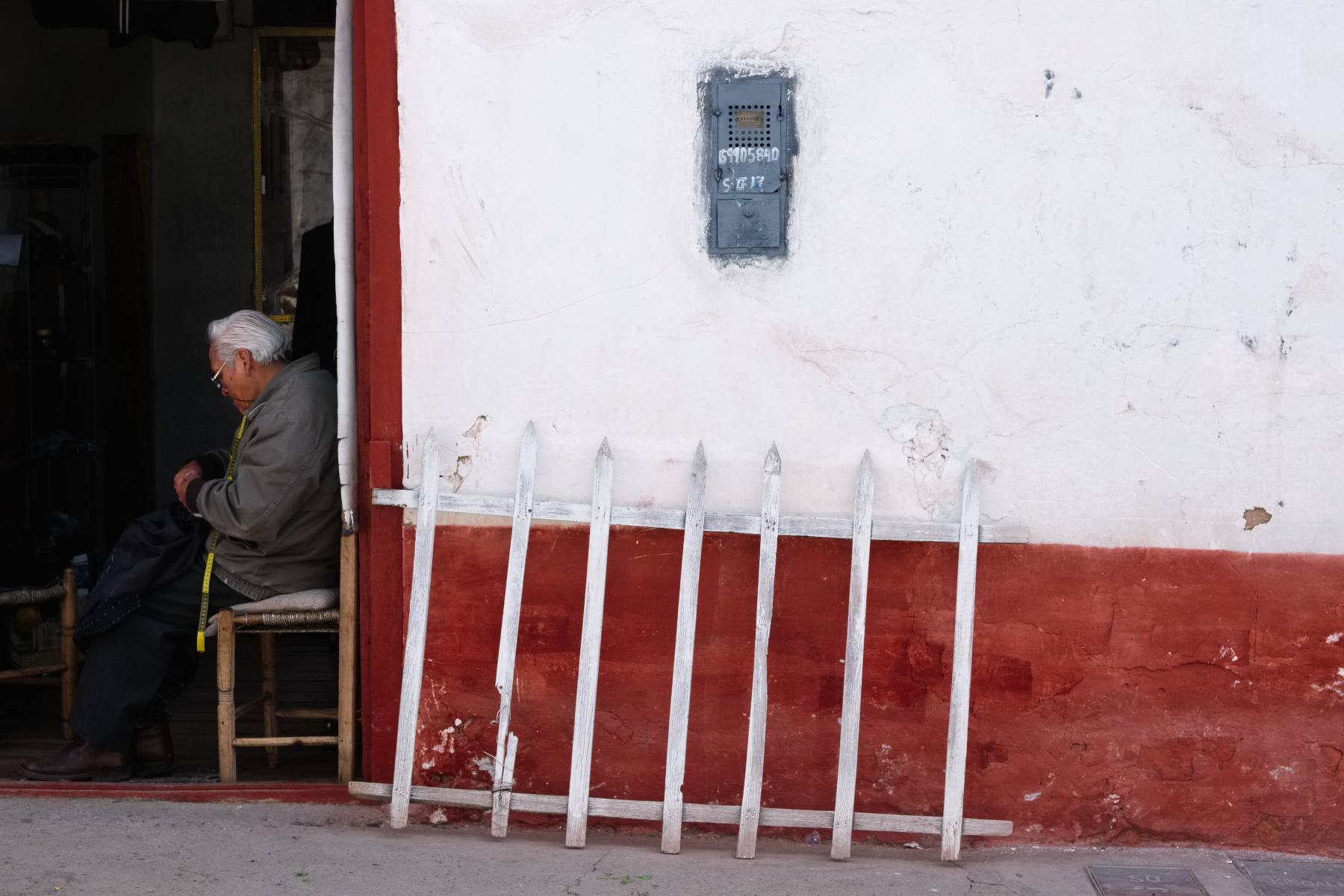 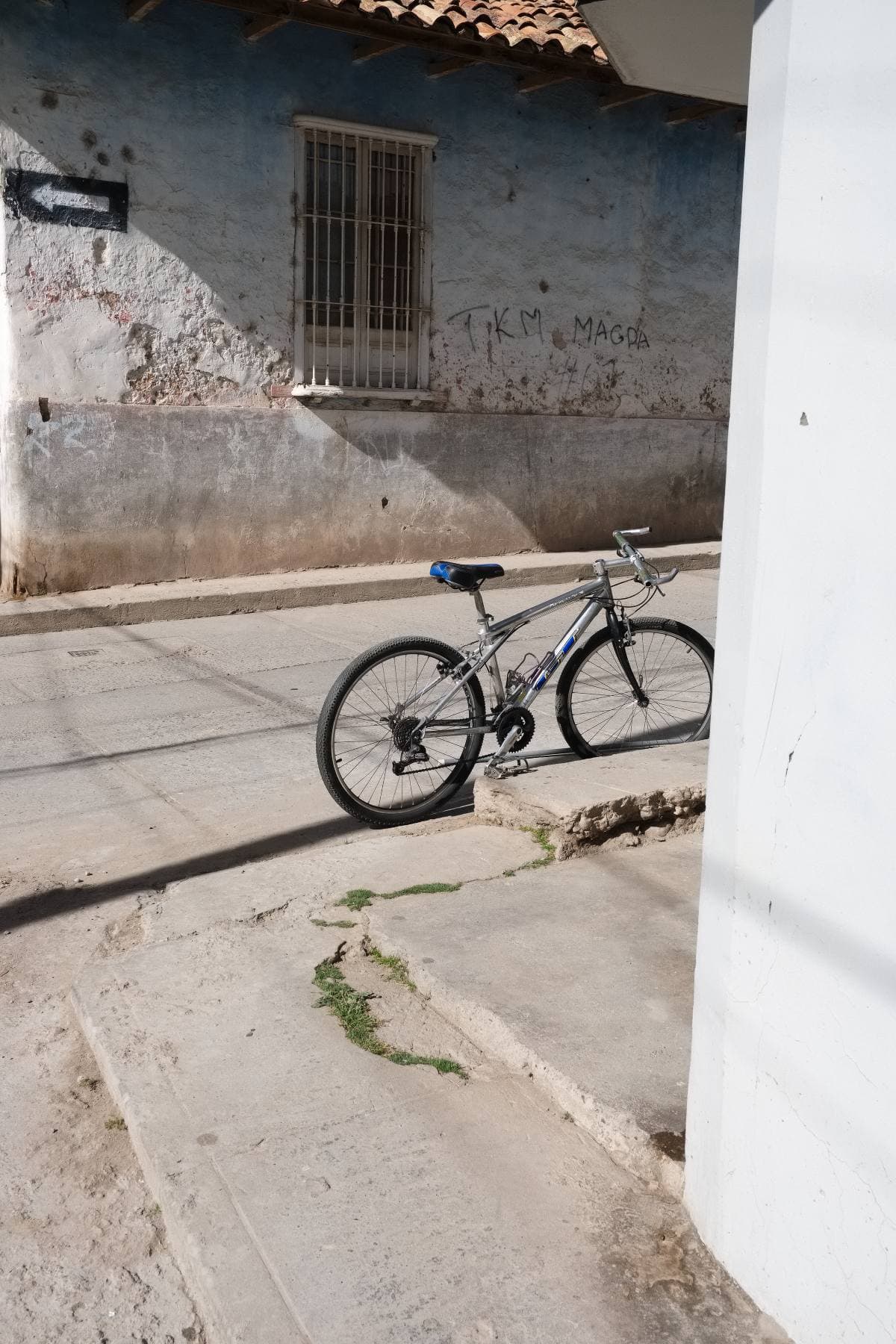 Jauja. As with many Peruvian towns bicycles are a popular, and accepted way of getting around for people of all ages. That and the ease of sticking them on pubic transport often makes me feel as if the UK has a long way to go.