I lost my lucky hat….  I lost it in the gale of wind crossing Lago O’Higgins on the boat. But it’s OK, being well prepared as always I have a back-up hat, a woolly one from home in Cornwall. Given its origins I may well find it to be attractive to birdshit instead :-) 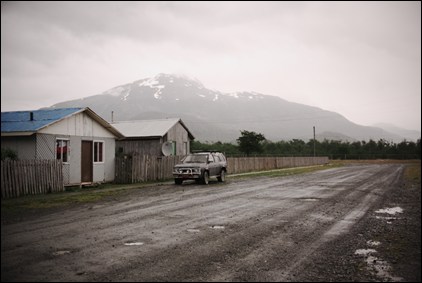 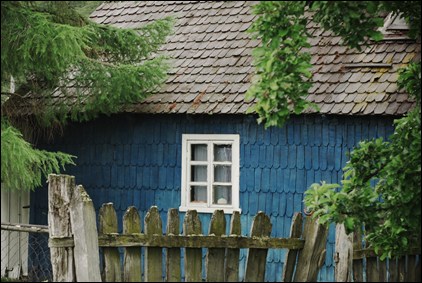 I was happy to stay in Villa O’Higgins as long as necessary, it was a great place and with access to a woodburning oven I baked fresh bread.. perfect for a cold and stormy day. The weather eased enough for the boat depart on Thursday, but earlier than the usual time so it was a hideously early start, riding the very last 7km of the Carretera Austral to the lake in a light rain at stupid o’clock in the morning. 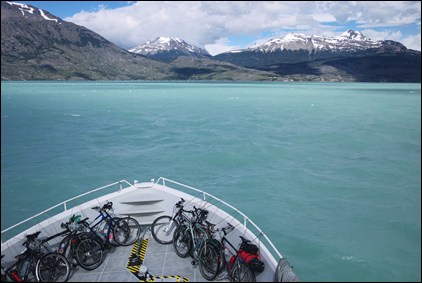 the boat to Candelario Mansilla… look at all those bikes! This crossing is very much a cyclist bottleneck

It is a 2 1/2hr journey south down the lake and a hideously expensive one at that. With the sole concession on the lake and with a steady trickle of tourists on package tours wanting to see glaciers and the like the price has been jacked up from 12,000 pesos just a couple of years ago to 40,000 now.. US$80. But they did offer a free paper cup of coffee, instant of course….

The rain cleared shortly after departure and it was enjoyable ride down the lake provided one did not think too much about the somewhat alarming list to starboard and the rather knackered, mostly deflated zodiac hanging limply over the stern… 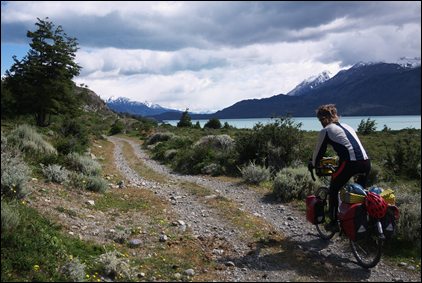 leaving Chile by the back door… 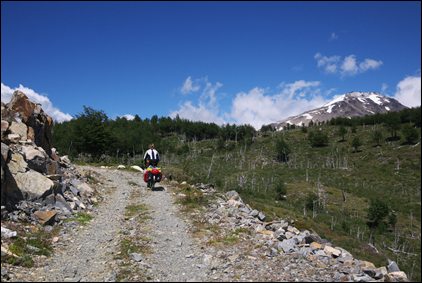 We, as in Nina, myself and another cyclist, Patrick, left the boat at the slipway and stunningly situated immigration post known as Candelario Mansilla. With passports stamped we were off. 17km of steep, loose, stony track through the mountains to the border with Argentina followed by another 7km of nicely tight and technical singletrack in a forest.. this section was fantastic and frustrating in equal measure. Some nice twisty, rocky and rooty sections to test bike handling skills… interesting on a fully loaded bike.. but also sections ankle deep in stinking, oozing mud and to finish sections of sunken trail, maybe 2 feet deep and not wide enough for panniers to fit through. A lot of lifting and hauling. I managed to ride about 90% of it but wrenched my shoulder badly flying over the handlebars while trying to ride one section I should probably not have even attempted. It will need attention when I get home I think but there you go, occupational hazard despite which it was a lot of fun. 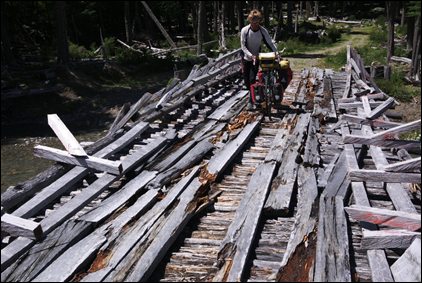 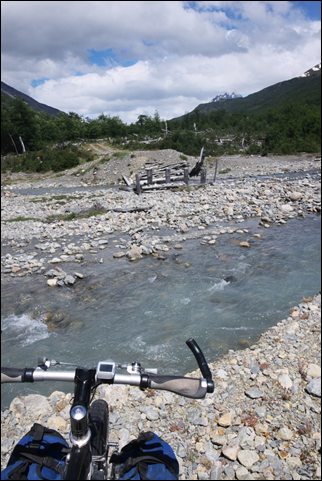 …or in some cases a lot of attention. It was a 5ft drop to the river.. 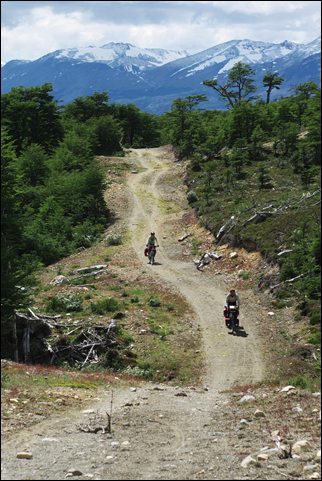 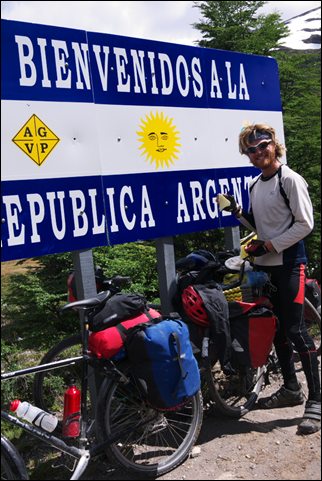 .. and so a return to Argentina. Patrick says ‘cheese’…

I rode the whole section  maybe a little too aggressively getting myself and my bike filthy in the process… Nina showed up at the northern end of Lago Desierto about 40 minutes after I did looking absolutely pristine… women, how do they do that? Patrick was a little slower again, handicapped on the rough stuff by his drop handlebars and relatively skinny 700C rubber. 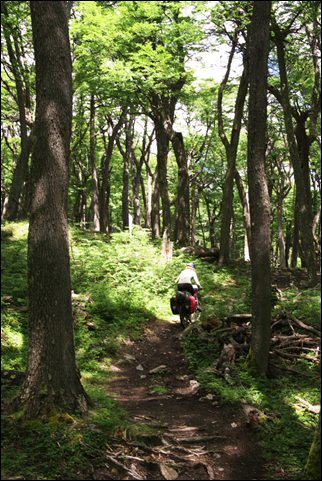 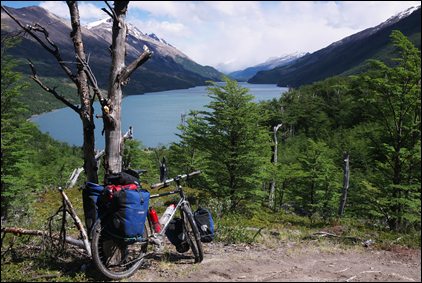 Lago Desierto.. Fitzroy sadly hiding in the cloud at the southern end.

It was pleasant dozing in the sun by the Argentine immigration shack while waiting for the boat to the southern end of the lake. When it arrived it turned out to be a tour boat so when it finally departed at 7pm it wasn’t a case of straight down the lake, rather a lot of faffing and messing about at the edges of the lake while the tourists on board climbed and elbowed their way over other to take pictures of a couple of very average, and very small waterfalls. 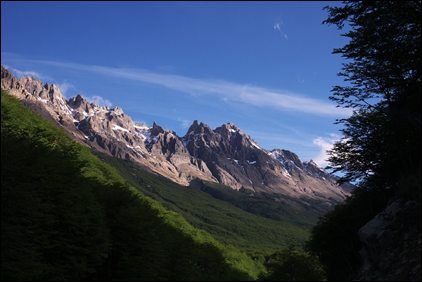 Back on dry land and back firmly in tourist land. Los Glaciares is Argentinas most popular national park. There is a camp ground near where the boat landed but being holiday season it looked hideous with kids running around so we rode a few km further and camped in the peaceful forest much to the bemusement of the occupants a passing tourist bus that stopped to look at a nearby waterfall. Honestly you’d think some folk had never seen feral cyclists… or waterfalls for that matter. 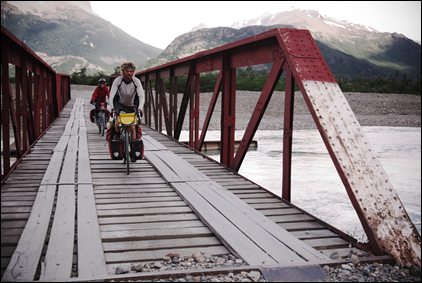 cool bridges on the road south to El Chalten

When he’s not riding Patrick fights forest fires back home in his native Canada so it was no suprise he was keen to make a big campfire, and one that he managed to revive again for breakfast. It was much appreciated, the morning dawned very cold and cloudy so it was nice to warm toes and dry wet shoes over breakfast :-) Amazingly Patrick works with the helicopter pilot that dropped myself and 3 friends deep into the Purcell Mountains, BC, for a wild climbing expedition back in 2001. Small world :-) 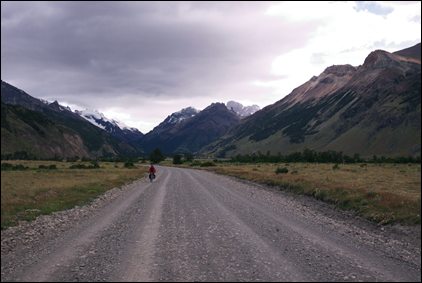 another cold, bleak morning. Great place to ride though :-)

From camp to El Chalten… 37km or rough dirt road. Quite beautiful and with a fresh tailwind. El Chalten itself is a small town of about 3000 people in a fabulously windswept location. The last few km into town we flew over the ripio at 50km/hr with a screaming gale at our backs :-) 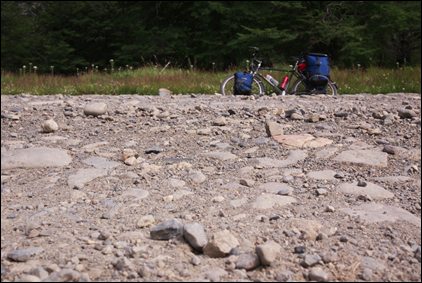 Argentine ripio. No different to Chilean but this morning I found it hurt more than the Carretera. Tiredness perhaps or memory of being beaten up by many many km of the stuff in the north of Argentina 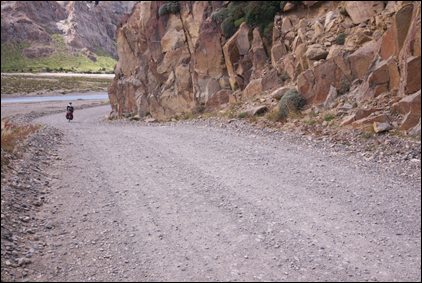 Thanks to it’s location El Chalten is also the trekking capital of Argentina. If the town has a soundtrack it is the tap tap tap of trekking poles on the pavement. Zip-off trousers and shiny North Face branded gear much in evidence here… The town only really ‘started’ about 25yrs ago. It is a strange mix of outback scruff and modern tourist facility. Small buildings sprout from the scrubby landscape and the town has quite a collection of battered old caravans firmly tied down against the wind. It feels quite strange to be back on the tourist trail but the excellent bakeries and reasonably well stocked supermarkets are quite welcome. There is no bank but there is an ATM… empty of money 99% of the time. Strangely the Argentinians have not cottoned on to the fact that lack of ready cash is throttling the local economy. 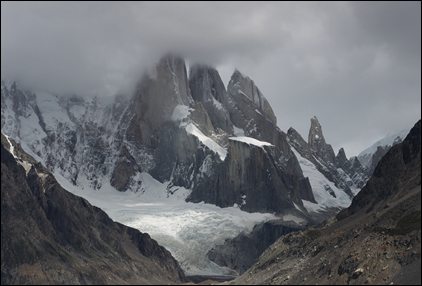 the great cliffs of Cerro Torre hiding in the clouds… 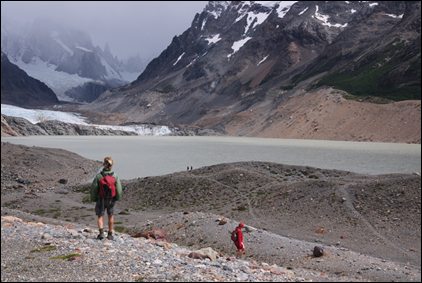 I bumped into Kevin the motorcyclist again here. He’s good company, we got quite drunk on some fine, dark Argentine ale :-) 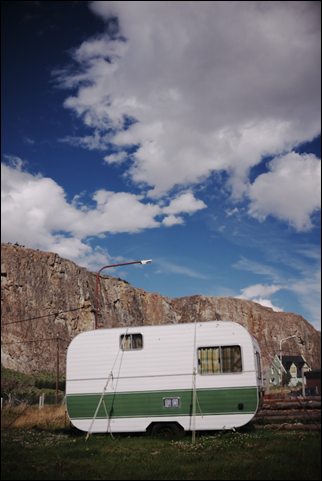 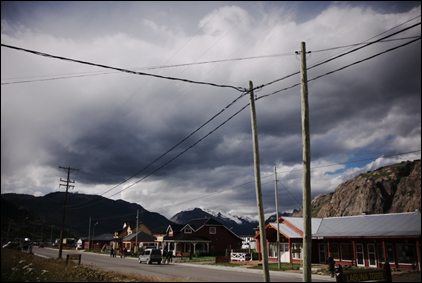 So, as I write I have been here 2 days. Today is a much needed rest day, I have a significant sleep debt and my hands, face, feet and so on are raw and bleeding thanks to the cold, the alternating dry & wet and the wind so I need to start getting that healed. Yesterday was a terrific 5hr hike up to Cerro Torre and tomorrow I will do the same to Fitzroy, 8hrs away. Nina and Patrick leave town tomorrow but I have company yet in the form of Ennio & Dina who made it here yesterday after taking an extended boat ride to the O’Higgins glacier :-) 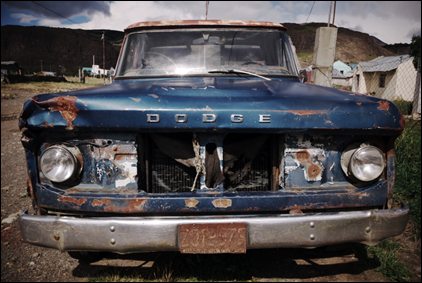 Hurrah! Argentina, the land of the gloriously shagged American pickup

I am certain it is just fatigue, motivation to ride is low today. I suspect however may be partly the thought of returning to Argentina’s Ruta 40. Last ridden long ago in the north I think the stretches ahead of me maybe just as arid and difficult, albeit somewhat colder… I am hanging on to the thought that some decent stretches of it, in theory, should be blessed with fresh tailwinds :-) 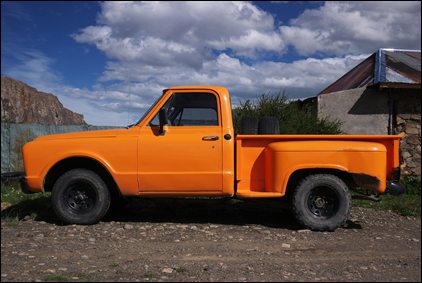 .. and the not so shagged. This one was for sale… now there is temptation ;-)

5 thoughts on “to El Chalten…”