I think I rambled on somewhere in my posts below about the intensity of experience when exploring a country by bike…. yesterday was a pretty intense day… everything good about riding in high mountains (and the bad bits like sore legs…).

So today I am in Guaranda having a day off… “estoy muy cansado hoy” as they say hereabouts… I needed 13hrs in bed last night after a good feed and I’m still feeling it in my legs. 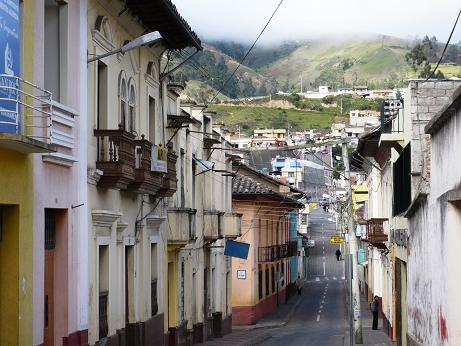 Guaranda is a little off the beaten track, it’s a very quiet little hill town at an altitude of around 2800m.. colourful buildings, steep cobbled streets and all those other picture book characteristics with a trimming of ramshackle electrical wires, peeling paint and fadad signs… I like it. Nothing to see as such but I’m happy to just chill here for day, maybe go for a walk in the hills later. The people here are pretty reserved though compared to say Baños or Latacunga. 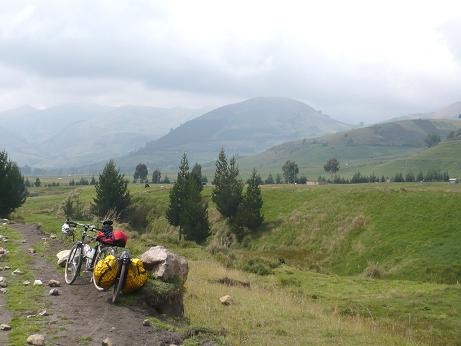 OK, back to yesterday then…. turned into quite a tough day on the bike. I left Riobamba at 8am, I rode to the village of San Juan where apparently you can hook into a network of dirt roads that head to Guaranda.. gave up on that idea eventually after too many conflicting directions from locals so returned to the paved road… glad I did, it was wicked in a perverse, masochistic kind of way. The road climbed continuously from about 2700m (Riobamba) to 4500m/14,700ft (on my altimeter so give or take 100m) on the southern side of Volcan Chimborazo… 50km of continuous uphill riding, not as “bad” as the Himalayas but it kind of puts the Alps and Pyrenees in perspective, it felt like riding up the Col du Tourmalet 3 times in one go.. with a full load. Riding at altitude, like mountaineering, I think is as much an effort of will as it is physical… everytime it gets really hard I think about the times I spent climbing some some of Europe’s highest peaks and then imagine riding the bike across those summits above 4000m. It’s a huge adrenalin rush. 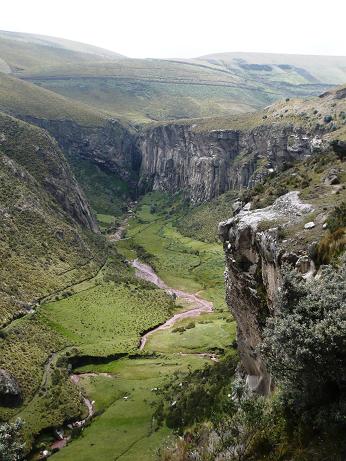 (on the way to Chimborazo)

Although only 96km or so it took nearly 7hrs of effort. The altitude sucks all the strength out of your legs although I am lucky… a lot of folk can barely function at 4500m. I went 1000m higher in the Himalayas but there I was already a long time at altitude, here I climbed 1800m in one go so the altitude hurts more. I am lucky though in that I cope with altitude really well… no headaches or anything… just tired legs. 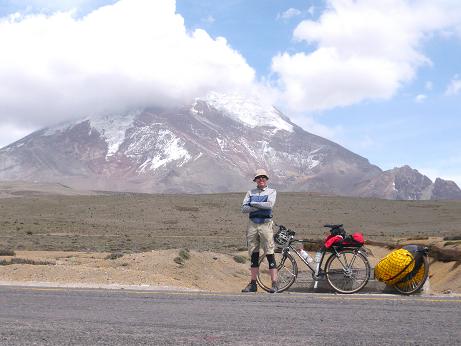 The views of Chimborazo’s summit at 6310m were breathtaking. Is very wild and desolate up there. It was fantastic actually to climb through the different “ecological zones”.. starting in Riobamba’s scruffy suburbs I climbed into lush farmland and then eventually into pine forest (in the tropics!), then to a zone of very sparse scrubby vegetation and eventually to the barren “moon-scape” (known as the Arenal) of the high slopes of Chimborazo herself. I rode by a small pueblo in the shadow of the mountain, I hadn’t planned to camp so hadn’t brought extra food or stove fuel but figured it would be an amazing place to stop for the night… The locals once they had got over their surprise said it would be fine for me to stay the night but they had no food… none spare I imagine unless they eat dust so I kept going instead. The road was superb, surprisingly good surface but very quiet, I was alone for much of the time to enjoy the delicious feeling of riding a bike up there. 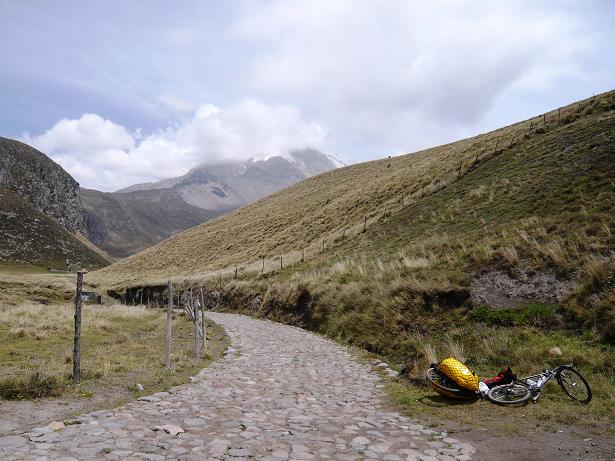 (excuse my untidy bike parking, I was hungry..)

The descent was on the western side of the mountain, I was well above the clouds in the valleys to the west and it was fantastic to watch the clouds boiling up from the cliffs below on my left, it was quite an exerience to descend into cloud in this barren, desolate landscape and then about 30km later pop out of the bottom of the cloud into a beautifully lush, green valley with fields, orchards, grazing animals and litte homesteads… with thicker air and warm! 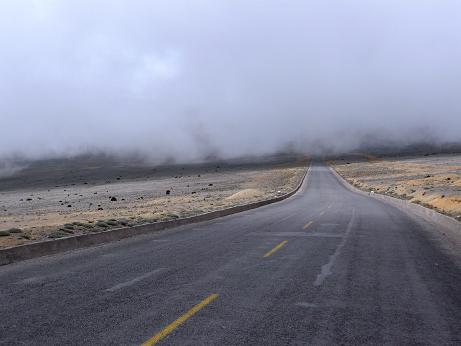 There is a tour outfit in Riobamba that takes people up the mountain so they can just ride down on mountain bikes (lazy… :o), I crested the top of the road over Chimborazo just as the truck had dropped off a couple of tourists with bikes… the guy in the truck stopped and got out to shake my hand! {warning, smug content coming… please forgive, I have to feel good about something in life…!} He was very impressed I had ridden all the way up there, he also said he had heard about me from some people who had seen me on the bike a day or two earlier on the eastern side of Chimborazo… my reputation precedes me!! This happened in India too… in the wild mountains of Ladakh I met 2 Germans on motorbikes… they were going same way as me but faster so after that every place I came to the people had heard all about me and wanted to come and talk.. lots of fun. Last night in town I stopped by a little street stall to buy some fruit, got talking to the lady about various things and I mentioned I’d cycled over from Riobamba… she looked at me and said (in Spanish of course) something along the lines of “no way… on your bicycle?!” so I showed her a pic of me and my bike up on the mountain on my digital camera…. she just looked at me. Was funny also when a tourist minibus went past with folk on a package tour I imagine… all the faces were pressed to the window looking at me… probably thinking “look at that twit” or “idiot” …. 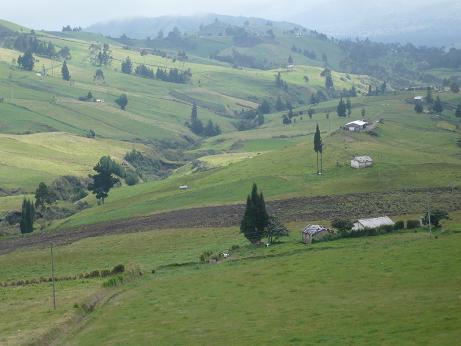 Only had one bad experience (aside from the dogs…. trying to sprint a loaded bike after 7hrs of riding really hurts….) coming into town when a bloke riding on top of a truck threw a bottle of full bottle water at me… lucky I was wearing my crash hat for the descent – it hit that and I managed to stay in control.. was doing 50km/hr at the time…. I don’t think (hope) it was particularly malicious, just someone being a dickhead…..

I was so so dirty from the road yesterday, it was very very windy and dusty up on the mountain and the sun was fierce but the air very cold. Love it….