“The Plan” this morning during my stay in Riobamba was to ride the 50km round trip to Cajabamba and Laguna Colta (which is supposed to be rather pretty), ideal I thought for an easy day to loosen the legs after the last 2 days of climbing….. but as is so often the way I ended up doing something completely different that turned out completely brilliantly :o) About 20km outside of Riobamba enroute to Cajabamba, near Calpi, the road crosses the railway line… this is the famous “Devil’s Nose Railway” (you can read about it here). It´s apparently very spectacular but is now mostly run just for the tourists 3 days each week, departing at 7am as it did this morning with a great blast of it´s whistle… I was happily still in bed feeling the effects of last night (more on that in a mo..). Maybe I´m just a jaundiced old tw@t but I’m really not bothered about the ride, I’ve travelled so much that people and experiences are more important to me now than “doing the sights” if that makes sense and besides being on a bike is such an intense experience anyway, plus of course I get to see stuff that regular tourists don’t. I have been on some spectacular railways around the world so don’t feel particularly as if I’m missing out, and have no real desire to sit in a little box car with a bunch of other visitors… hang on, I digress…. where was I…? oh yeah, Calpi.. well when I saw the railway disappearing off down a narrow canyon I couldn´t resist and ditched The Plan in favour of riding my bike off down the railway line… it really was rather fun as it descended into a very secluded and beautiful canyon with some cultivation in the bottom below the railway line. It wasn´t a bad trail, in places there was a narrow track alongside the line, in others the sleepers were either half buried or missing completely so it was 99% rideable apart from a couple of groovy wooden bridges. I only rode a few km down the line as I wanted really just to loosen my legs rather than get even more tired… Along the way I came across a group of “campesinos” in traditional dress digging on the embankment by the line, drainage or something for the crops I imagine… needless to say they were a little bemused by the arrival of a gringo on two wheels. Broke the ice with the packet of biscuits in my backpack and spent apleasant few minutes chatting. I gave up trying to explain the concept of actually wanting to ride a bike round South America… my Spanish isn´t good enough though even if it was I doubt the message would have made sense anyway… so we stuck to the usual questions like where am I from, where am I going, do I like Ecuador, am I married, how much did my bike cost (always an awkward topic, I have to fib… I can´t tell them it´s worth $3000… ). So yeh, that was my morning… wonder if any of the folk on that train had a chance to sit down and share a snack with a few locals on a railway line in the middle of nowhere… it´s why I so love travel by bike. They would have made a lovely photo and I did ask as I was leaving but they looked so uncomfortable with the idea I let it drop. Stupidly though (yes, I have my moments…) I forgot my digicam so only had my Leica so you can either wait 7 weeks more for the pics or go here.

I’m feeling pretty knackered this morning, the last couple of days have been hard work, I would have been OK but my early night plan was sabotaged once again when I hooked up with Swiss Shawn from Baños (think he’s stalking me.. :o) and the two girls I met in the hot springs that evening (this was a good thing…) so we went out for dinner and few beers after… it wasn’t actually that late a night as those 3 were all on the train at 7 to Alausi before heading on down to Cuenca. This is the only bad thing about travel… the continuous goodbyes. ho hum.

I’m “resting” this afternoon, there is an old sofa kicking around on the patio at the place I’m staying so I’ve commandeered that, it’s now right outside my room in a quiet corner just out of the direct sun… I shall be back there horizontal shortly I think. I’ll maybe upload a pic later…

Before I go though I thought it might be fun to write down exactly what I ate yesterday.. it’s always like this when I’m touring in the mountains…. just hungry all the time so in chronological order starting at 6am… entire 300gr box of cornflakes and litre of yoghurt, two peaches, 4 bananas, packet of biscuits, 3 course set Ecuadorean lunch, 4 oranges, giant cookie, tuna sandwich, packet of raisins, big avocado and ham salad, steak with chips, rice and beans, an apple…. and I still woke up at 2am this morning ravenous :o)

I have a dilemma now for moving on tomorrow. Originally I planned to ride the dirt roads, about 70-80km and up to 4300m, across the southern slopes of Chimborazo to Guaranda… but I would also like to visit Cuenca. The only flaw with that is that Cuenca is 250km down the Pan Americana with bugger all between here and there. I don’t have time to ride the round trip given I want to spend as much time up in Colombia as possible, I could ride one way and be there by Sunday, spend a day or two and bus back to Riobamba….. this is a toughie. I have a feeling I will pass this way again before too long on my “must do before I die” (meaning maybe next year…) ride down the whole length of S America to the tip of Tierra del Fuego and barring earthquakes or volcanoes Cuenca ain’t going anywhere…. I’ll sleep on it .

Anyway I just picked up some mangos at the market so if you’ll excuse me it’s sticky fingers time :o)

p.s just a late update, I decided that instead of a pic of a scruffy old sofa with me on it (even tho I am very nice to look at.. ahem) you’d rather see a pic of Chimborazo.. so here it is: 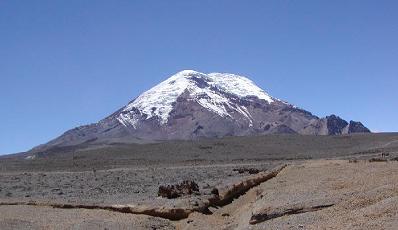