Hey, with reference to my last post… it’s the same day and I already found cooler climes… a cafe with air-con :o)

The last couple of days have been pretty good going, but bloody hot – especially today. I arrived in Neiva having lost my voice from the stress of the ride.

Back to the beginning… I finally dragged myself away from San Agustin yesterday at 9am after a particularly leisurely breakfast… it was the mountains of oven fresh bread that scuppered any ideas of an early start. The ride, about 120km, to Garzon was nice, a few little climbs but mostly very pretty rolling countryside as I moved away from the higher mountains with a couple of spectacular red rock gorges and so on thrown in for good measure. It was getting warm though, I was already feeling it by the time I reached Pitalito just 37km from San Agustin, I lucked out there though with a cafe stop.. good coffee, really nice cheese bread (but not as good as El Maco) and free drinking water. 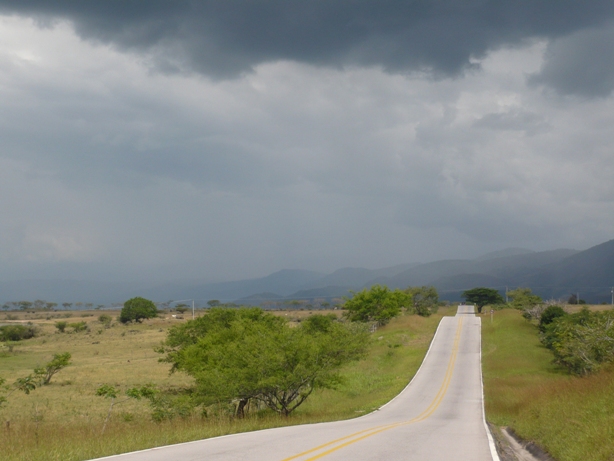 I’m trying to remember what was memorable in particular about yesterday, it was a very good day of riding but the heat this afternoon has addled my brain… ah yes, the guy on the motorbike… this was fun, I was cruising with a tailwind at around 40km/hr when a chap on a motorbike pulls alongside, says hello and we then proceeded to hold a conversation for the next few km until the road started to go uphill and I rapidly went backwards relative to him… Talking of uphill, some of those climbs were killers in the heat…

Approaching the town of Altamira after about 90km the sky went black up ahead and the mountains disappeared behind a veil of rain… the timing for lunch was perfect, I pulled into a cafe on the outskirts of Altamira just as the first drops started to fall. The storm lasted about as long as it takes me to eat a big plate of rice and beans so when I left the roads were wet but the edge had gone from the heat.. ideal for a leisurely cruise along the final 30km to Garzon.

Garzon then… nothing special, just the usual chaotic, colourful country town. It felt a bit odd riding in, they don’t ever see foreigners, especially ones on bikes pulling trailers.. every set of eyeballs followed me up the street… they were nice people though I decided once I’d got cleaned up in the pretty crappy (but clean and friendly..) pension I found and headed out in search of food. 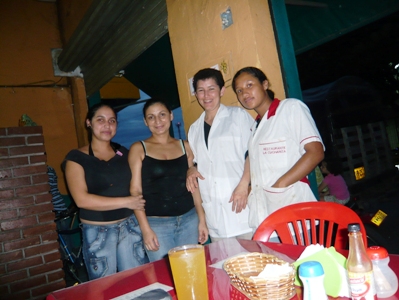 Dinner last night was a hoot, the Spanish in Colombia seems to have a different pronounciation to that in Ecuador, I find it harder here to make myself understood… and there always seems to be more background noise in Colombia to mess things up further… The four girls working the restaurant I stopped in for dinner were a right bunch of comedians and had no qualms about taking the mick out of the silly gringo… but all in the nicest possible way, it was a fun evening.

I left Garzon this morning at 7am with an escort in the form of one of the local road racers out for an early morning training session which was cool. He turned off after a few km and I settled down for the ride to Neiva. The first half was quite hilly as the road skirted around the edge of the mountains before finally descending to the floor of the Magdalena River valley. I had some welcome cloud cover ’till around 10am, when I stopped for coffee and food in Hobo (pronounced “Obo”) not long after 11am the heat was already intense. As I sat in the shade of a roadside cafe I started wondering just how an earth I could face the final 50km to Neiva… I measured 38 degs C in the shade… 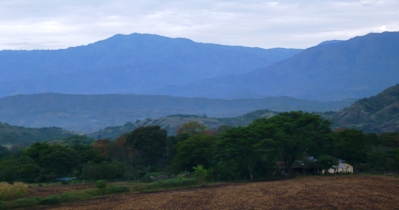 It was hard… this is the hottest place I have ridden for any sustained period I think, just as well water wasn’t an issue with plenty of little villages and so on – I drank 7 litres this morning. The final km into Neiva were mentally painful though, the road signage measures distances to city limits… and Neiva’s city limits are way out in the countryside so I had to deal with the crushing reality that the 1km to go sign for Neiva was still miles out in the countryside with another 12km to the town centre… in the hottest part of the day, hence the expected 113km was 125 in reality. I should qualify all my whinging tho, it was a great ride and the scenery was stupendous. I would not have swapped today for 4 hrs in an air-con bus…. and the pineapple milkshake at ride end could not have tasted more delicious… :o)

Neiva is nothing special… just a very noisy, chaotic Latin American town.. so quite OK really.

As for tonight, well I have a warm (very) hotel room, a cold shower with warm water coming out of it and, errm, some very crusty riding clothes… I will wash them tonight and wear them wet for a nice cool start tomorrow…. I know it won’t last though. I have another 3 or 4 days to go in this oven before I start climbing back up to Bogota. I might have to scale the distances back a bit, it only takes 5hrs but 125km a day on a loaded touring bike in this heat is quite hard work….

Tomorrow’s plan… well if I can find the right road out of town then a short ride of about 40km to Villaveija and the Tatacoa Desert.

One thought on “San Agustin to Neiva…”