Sunday today, last day in this area so I did what any self respecting cyclist would do on a Sunday… go for a ride (enjoying the freedom my bike gives me), stop at a cafe for a brew (in this case a “tinto” – strong black coffee) and finish off with a big lunch. I wanted to go back to Isnos 25km back up the mountain to have a look around as it looked a colourful little place when I whistled (or rather dragged my weary legs) through on my way to San Agustin. I didn’t stop then because I wanted to reach San Agustin before dark. I was right, Isnos is a nice and very friendly little place, being Sunday the plaza in front of the church was packed with icecream sellers and juice vendors… and folk enjoying those nice things… The cafe was the usual Colombian story of being welcomed with open arms, it never gets boring though it does get hard work sometimes answering the inevitable questions (I shouldn’t complain, it’s brilliant really). This would be an OK village to spend a night, seemed to be a few pensions around the main plaza, the cafe owner said they don’t see many visitors, let alone foreigners because they all go straight through on the bus to San Agustin which is understandably the main draw because of the archeology. 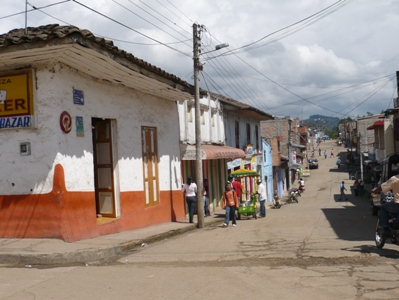 Plenty of local folk out on bikes today, riding just for the hell of it which was really nice to see. It was so hot this morning, if it is this hot up here at 1700m I dread to think what the next few days will be like down in the valley… around 1000m lower…. It’s been lashing down with rain again this afternoon so temperatures are back to being just perfect as I write.
Coming back into San Agustin about midday I stopped by a funky little restaurant (El Fogon) I ate in yesterday, they have a couple of green parrots hopping around and the light inside is really nice thanks to a couple of rust-stained translucent panels in the corrugated steel roof. I parked my bike in the entrance hall and walked in red hot & dripping sweat all over the floor…… but the folk in there were really nice and showed me out the back through the kitchen where they had a big tank of water to freshen up while they sorted my lunch… the usual midday soup followed by a great plate of rice, beans and fried chicken with a couple of tall glasses of blackberry juice. My Spanish is not really up to being able to hold a proper deep and meaningful conversation (beyond bikes, travelling, home and stuff) so it was slightly embarassing when the 2 waitresses took a huge interest in me while I was trying to eat… we managed OK though I think….
Tomorrow then if I can drag myself away I will descend into the furnace of the Valle de Rio Magdalena…. but it would be so easy to stay another day in this town and just go riding in the hills again and enjoy this little community. I think Colombia will be different in 5 or 6 years time as the “gringo” trail extends it’s tentacles down into the south… of course, I could come back next year.

Bit nervous of how my trailer will hold up over the coming days… I have plenty of string and zip-ties however so we’ll manage somehow I imagine :o)

Oh yes, I passed the same chap today who gave me water the day I arrived, this time he was by the road with a big sack of potatoes… I waved, he waved, then pointed at the sack… I kept going thinking “shit, I hope he didn’t want me to carry those into town for him on my rack….” but he came past soon after on the back of a motorbike (with his sack) and another cheery wave so I guess no offence caused on my part….