I’m going through a ‘bit’ of mental downer at the moment… I left Oruro on my bike a couple of days ago… and got about 500m down the road before giving up.. I was feeling stupidly weak so did a u-turn and slung my bike on a bus to La Paz… so ashamed to say I skipped 200km of riding… having said that though there was no way I could have ridden it and from the bus window it looked flat, boring and a very busy stretch of road, and it’s only 4% of the distance I’ve ridden so far. It’s very much the nature of bike travel… huge highs and massive lows… I met up with James again here in La Paz and he confirmed the only thing I missed was the descent into La Paz… which is truly amazing by the way, it is an incredible sight to see the city sprawled in a  deep canyon.

Talking with J over beer (rehydration you see…) have been wondering if in fact I picked up this bug in Tahua… I was strong all the way through Bolivia from Villazon to Uyuni and across the salt.. but from Tahua my strength and well-being went rapidly downhill… 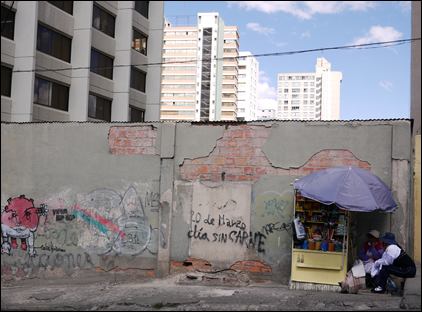 I’m stopping here in La Paz until I’m strong enough to ride back out of the city. I’m still needing around 16hrs/day in bed… ho hum. I’m happy to be in La Paz rather than Oruro, what a contrast.. the centre of town is thoroughly modern with great cafes and so on while the steep cobbled streets up each side of the canyon hark back to earlier days… it’s a fascinating place. As soon as I am strong enough I’ll get out and about for some street photography. There is also a “100% fake english pub” (their words, lol) here run by a chap from Birmingham… it sounds awful .. a typical backpacker hangout but it’s not… Being too expensive for the whinging stingy  or Israeli crowd and offering a menu limited to english pub grub it seems to attract a better class of traveller, lol, which if course is why I have been there :-) My stomach can still barely cope with food but I threw some lincolnshire bangers and mash with gravy at it last night and although slightly overwhelmed afterwards it was delicious and worth the subsequentrestless night… Genuine mum’s recipe for the sausages… Hoping I feel up for fish and chips tonight :-)  Have also found a cafe with great music, great coffee and chocolate cake too… therapy :-) 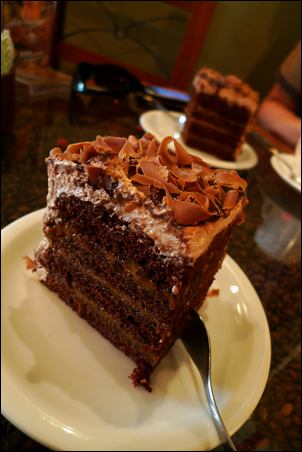 mmmm, good for the head

The only thing wrong with the city are it’s drivers.. the streets are utterly clogged with cars, 4x4s and minibuses and they really are piloted, seemingly without exception, by a bunch of tossers, it is very much a case of the pedestrian or cyclist feeling like a deliberate target rather than just “in the way”… even worse than Quito… and Delhi..

I went to see a pharmacist yesterday to see if they could suggest anything to help my stomach along… antibiotics may have been sensible but I decided to just leave the drug choice to her… She gave me some large grey pills of a name I had never heard of so being reasonably cautious I decided I’d look them up on the web to find out for myself exactly what they were… The first page Google took me to listed recommended doses… for horses, sheep and so on… hmmmm. The manufacturers page was a little more useful, seems they are benign, and old fashioned, drug designed to help restore the natural balance of bacteria in the gut, and the recommended  dose for the average human is only slightly more than that for a large dog. Very useful… so we will see. 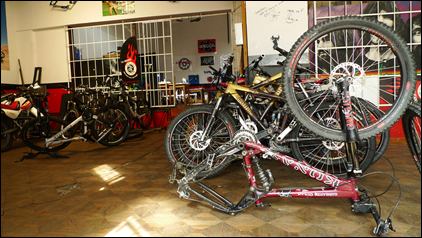 Yesterday I was also able to take advantage of some solid ground work by James on the bike repair front… he needed new bottom bracket cups so went to the Gravity Biking outfit that run trips down the Yungas highway… they directed him to their workshop where they maintain their fleet of Kona downhill bikes…. so yesterday I took my bike along on the way to collect his to see if they could do a proper job with that sheared bolt… They did.. and what a fantastic workshop with fantastic people :-) 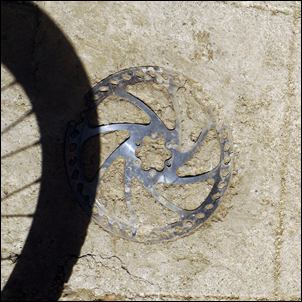 a hint at the treasures beyond the door... lol

A downhill bikers wet dream with decent bikes probably numbered in the 100’s including a classic Kona Explosif (mmm), a huge, well equipped workshop and racks and racks and racks of spare parts and equipment… XTR, park tool etc etc. So, if you ever need work done on your bike in La Paz then they really have to be the only choice. Go the Gravity Assisted Mountainbiking Office on the Prado (they are in all the guidebooks) and ask for directions. The workshop itself has no sign but you’ll recognise it by the disc rotors set in the concrete outside the steel door… and the view from out front is fantastic. 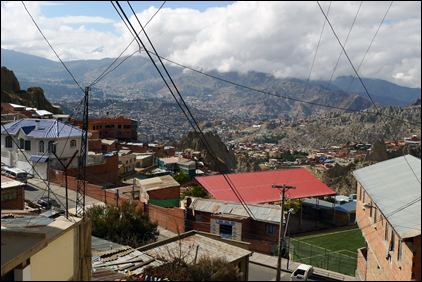 the view out front..

As for me.. well, have a dilemma now, feeling weak my body is not recovering, getting sick while run down cycling always takes time to get over, though the horse medicine may help… I was designed to be a sea level creature and I keep forgetting I am 4km up in the sky here. I had a plan to detour on the way to Cuzco to descend to Arequipa, cycle along the edge of the Colca Canyon and then climb all the way back to Cuzco… it’s a lot of extra effort involving a 4700m pass on the way to Arequipa, then a descent to 2000m … then I’d need to climb a steep 2000m back up as well as cope with all the regular climbs and dips along the way. After Lake Titicaca the direct (high) road to Cuzco is awfully tempting, probably only 500km or so from the border with Peru… If I do that it means my journey will have been around 5700km.. so not as far as originally planned but when I was sitting at home back in December looking at just a large map of South America with no firm route plan (the best way) my estimate of around 7K km was not much more than guesstimate…

Being here for a few days does give me time to tune in to what is going on in Bolivia, the funniest piece of news is that just a couple of days ago a company here launched an energy drink looking suspiciously like Coca Cola, tasting suspiciously like Coca Cola but under the wildly different branding of Coca Colla… apparently the name comes from a highland people local the area where the leaves are harvested.. The properly different thing is that it contains Cocoa leaf extract.. the same stuff, though less concentrated, that governments and police forces around the world get so excited about in it’s powder form, and the same stuff that the original Coca Cola had in it.  The press release I saw said that.. ” the main objective  is to promote the industrialization of the coca leaf to show their qualities and erase the stigma of drug trafficking…” (best translation). It also said it was a good thing because this the drink will allow Bolivian bus and truck drivers to drive even longer hours without sleeping … and in my own mind I imagine with less resort to alcohol and amphetamines etc etc, lol.  Heck, folk have been chewing coca leaves up here for centuries so I suppose it’s just the natural next step. Coca Cola Corp have yet to comment… Wonder if I can take a bottle back to the UK with me..

, that’s enough for now… time for more ‘therapy of the chocolate kind’ I think…

p.s. sea level tour next year… Holland or something, lol.