It is strange how not being able to do something increases ones desire to do that very thing… in this case cycling, the motivation is back after a couple of days hiking and a couple of days chilling… but there is little point in rushing south from here. I have to go back into Chile to continue, either to Torres del Paine and at any rate to reach Ushuaia, isolated as it is on a little wedge of Argentina surrounded by Chile on the Grande Isla de Tierra del Fuego… the problem is not one of injury or bicycle problems, rather Chiles borders down here are closed. The goverment is hiking the price of gas by 17%, it is already as expensive as the UK in southern Chile so an extra 17% in a primarily rural economy with cold temperatures and vast distances to travel is going to hurt. The roads are blockaded by protests.. burning tyres, petrol bombs etc, that kind of thing. The police are using tear gas and people have died. I am sure I can sneak across on a bicycle and I have every intention of trying.. but given it is only about 1100km to Ushuaia I do not need to rush to do so. Today instead I have an appointment with a friend from New York, a fire, a steak and a beer.. or two. An Argentine salad if you like… of meat and beer. The sun is shining, the wind is howling. Life is good :-) 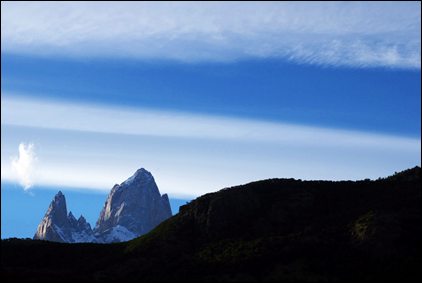 a clear and cold evening, the summit of Fitzroy looms over town

A few pics follow… but not many – this connection is as slow as the glaciers coming down from the icecap.  Yesterday I made the 25km return hike up to Fitzroy. On the trail at first light around 5.30am I had the place to myself. Magic. It was only on the way back as it started to rain and the wind began to howl that I met the guided day hike tour groups, shuffling their way upwards in lines of heavy boots… I felt ashamedly smug as I skipped my way past in my running shoes with a little dry bag over my shoulder :-) Just 10 minutes from the trailhead and looking forward to a siesta the trail became busy… people already out of breath and asking me if there was much more climbing to do… “errm, yes, a little..” was my answer. After all one doesn’t want to discourage folk by telling them they have another 12km and a lot of steep uphill to get to the amphitheatre ;-) 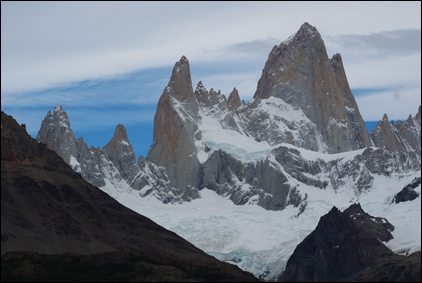 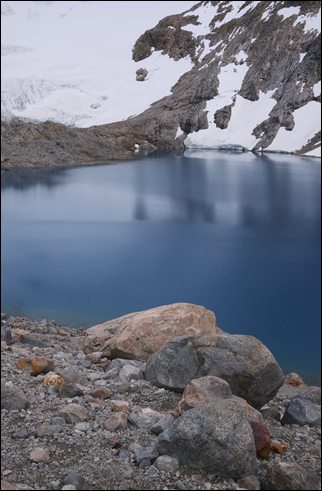 beautiful blue waters at the foot of Fitzroys cliffs... this lake flows into another, more blue, that has a surface littered with scrps of floating ice from the glacier above. 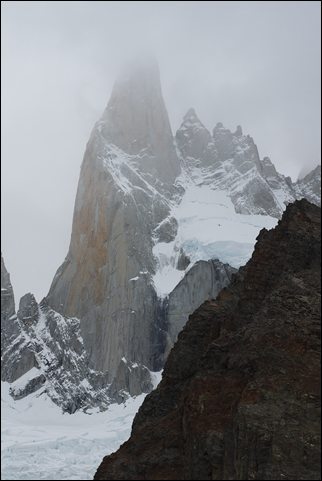 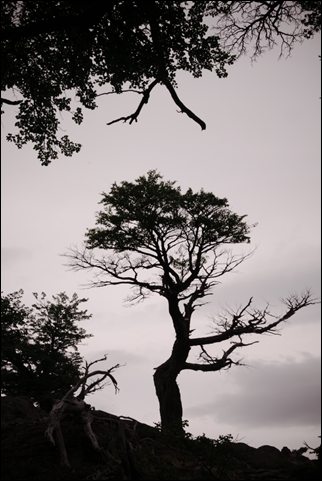 Back in El Chalten the logic of touring on a simple, understated bike like my Nomad was illustrated to me perfectly. I found a Russian chap inspecting it closely, he turned to me and said “where did you buy this bicycle, in South America no?”. I explained it was English and, in my opinion, a really rather excellent bicycle. “How can this be” he said, ” it is so very simple and it does not even have suspension, you are crazy to pay more than 200 euros for this bicycle”. I didn’t try and explain the concept of a quality handbuilt steel frame able to absorb the worst of the bumps and durable, high quality components for touring. The point was he didn’t consider it would be worth nicking even when parked alongside the local beaters and ATBs :-) Admittedly the skinny steel frame and thumbshifters look old fashioned… and it is useful perhaps that I rarely clean it apart from the essentials like drivetrain and brakes. The matt black finish buried under a coating of dust is highly effective at disguising what is, in my unashamedly biased opinion, a really rather nice bike :-) 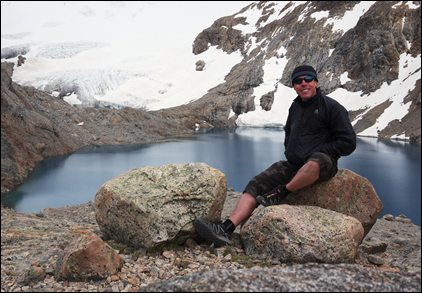 here's trouble...a rare pic of yours truly in the backup hat ;-)

4 thoughts on “a salad of meat and beer…”