“ach, the fuc*ing wind…!” is a phrase I have heard often over the last few weeks.. it is usually the second, if not the first thing cyclists I meet coming from the south say to me. Regardless of their native language they at least have this much English. Statistically it is true, going to the north is harder… in theory, the winds down here mostly blow from the west/northwest. It doesn’t always work like that however. 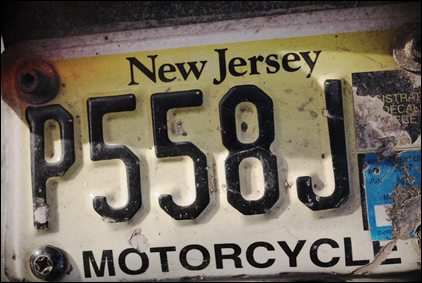 a long way from home 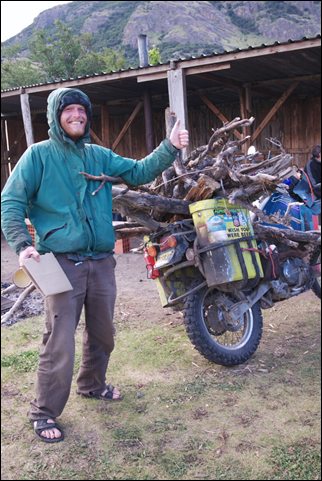 I somewhat reluctantly unstuck myself from El Chalten on the 7th day… nothing biblical about it however. I felt as if I had run aground there, I made friends, drank beer.. and wine, enjoyed great slabs of beef cooked over the embers of a fire under the stars of the southern sky… all that romantic sort of stuff, as well as the amusement of watching various inebriated males fail miserably to ingratiate themselves with a group of 4 French girls that joined us by the fire :-) 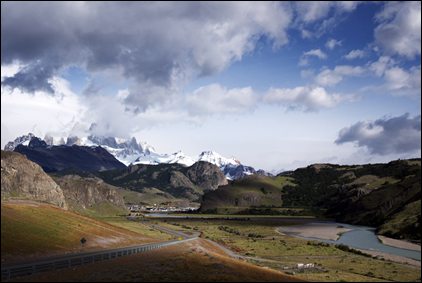 the valley at El Chalten

I felt a little sick in my stomach as I rolled out of town with 6 litres of water on board, having suffered crossing the vast deserts in the north I knew I was likely to suffer again in the wastes of Patagonia. Dramatic eh! My hope was that the winds would be favourable, from the northwest…. 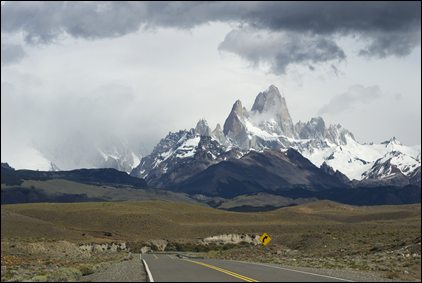 Indeed theory was borne out by reality as I climbed out of El Chalten onto the appropriately named Meseta del Vientos, a pair of Condors flew alongside me briefly as I enjoyed the pressure of the gale at my back. 10km later and clear of the mountains that changed. The wind shifted to the southwest.. a cross wind for the 90km stretch out to Ruta 40 where I would turn south. 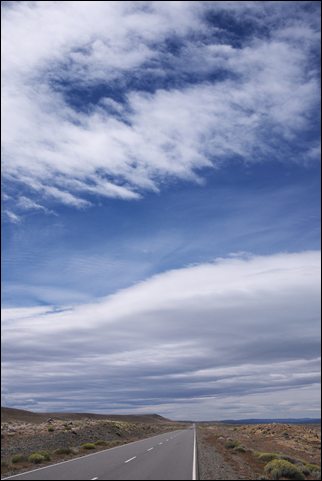 Great gusts tore into me like cannonballs, sending me skidding across the road and into the gravel on the opposite verge. With little to relieve the monotony of the pampa and in an attempt to block the roaring of the wind in my ears I plugged myself into my iPod, found a small gear and plodded across the wastes. 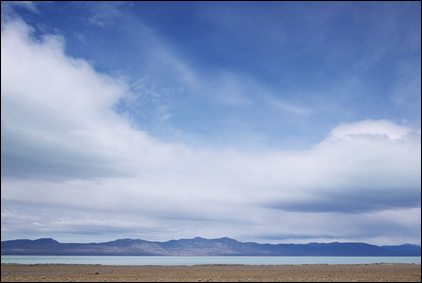 looking south… some scrubby bugger all, then lago Viedma, then some more bugger all. Great icebergs could be seen on the lake, the children of a vast glacier just visible in the far southwest corner. 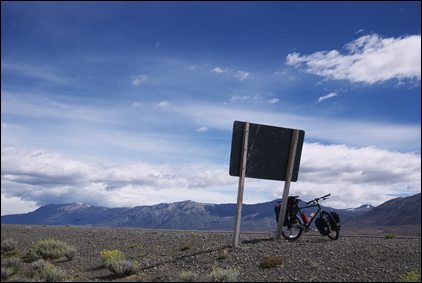 As the day wore on I watched my shadow grow shorter then longer again.. and then disappear altogether as the sky clouded over and what little colour existed in the landscape was erased altogether by the gloomy light. 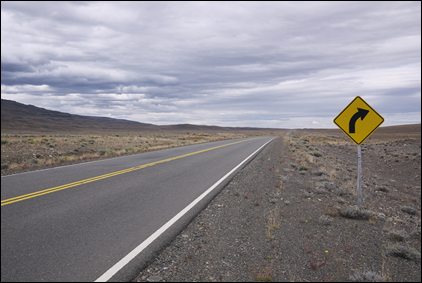 curves in the road are all relative out here. in this case the sign warned of a barely perceptible change in direction of a half-degree or so.

I joined Ruta 40, last seen many 1000’s of km away in the north of Argentina, with empty legs. Now into the wind I grovelled a further 20km before calling it quits for the day at 110km and pitching my tent behind what was probably the only roadhouse for 100’s of km. 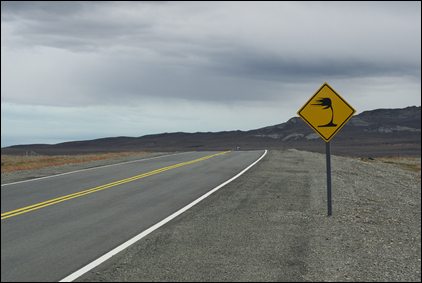 depending on your persuasion this sign may mean “paintbrush”, “desert island”, “stupid cheese-string man from the TV commercial”, “bizarre sexual fetish” or simply “windy”. I thought of all of those in the space of about 30 seconds as I rode by so not sure what that says about me. 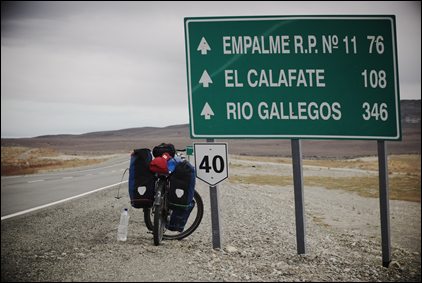 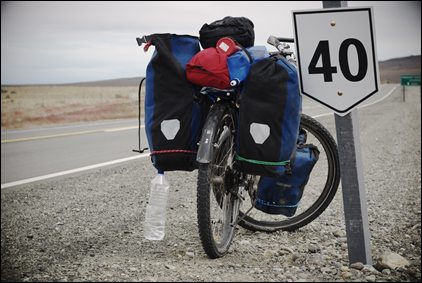 I’ll include this pic too simply ‘cos I like it. I shouldn’t grumble about Ruta 40, at least this bit is paved :-) Plastic waterbottle ethically scavenged from the garbage in El Chalten ;-)

Here the staff were not overly friendly but nevertheless were quite happy to take large sums of money from visitors. English to the core I chose a slab of rather nice looking walnut cake from the counter to have with my afternoon tea. US$5. For a piece of cake. I didn’t buy anything else. Judging by the steady trickle of tour buses that stopped by that evening I suspect they do rather well out here. 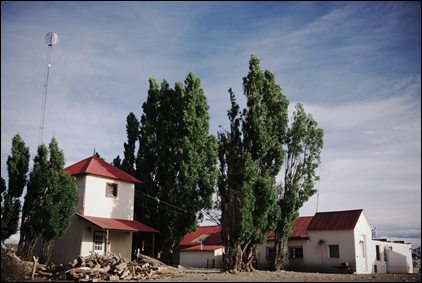 the roadhouse at La Leona 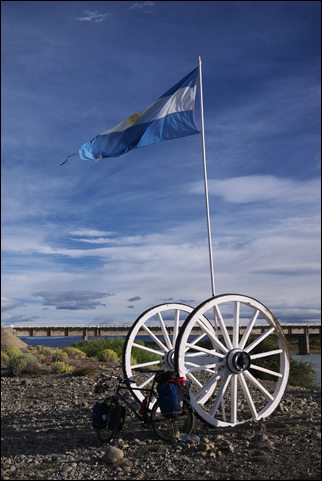 there was a sign saying it was a ‘historic site’… but I think that means simply that before it was built there was just dust. No great civil war took place or anything exciting like that ;-)

The wind raged all night, I finally dropped off in the small hours before waking at 5am to… silence. A rare and unusual absence of wind. I should have got going there and then but I didn’t. I was too comfortable in my sleeping bag so spent the next hour and forty-five minutes trying to decide if I should get up or not. I did, eventually and hit the road around 8am. 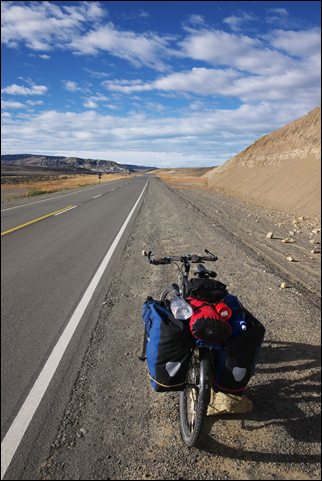 The wind when it came stayed light most of the day, a rare occurrence in southern Patagonia. I thought I might manage without my iPod but I only lasted 45 minutes. The monotony of the road, asphalt at least, and the long, draggy climbs slowly sapped my willpower and my legs.
Early in the day I met a Swiss cyclist going north. His gleaming bike and spotless gear suggested he was only at the start of his journey and had yet to enjoy some ripio. His bike was amazing, lots of gleaming carbon and anodized bits with hydraulic discs and suspension. The Russian guy would definitely have considered it worth  stealing… ;-)

“I am going all the way north on Ruta 40” he said. Keen to find out about road conditions south to Torres del Paine I asked if he had been there. “No, it is not on Ruta 40” came the answer. “ah, OK, will you go to El Chalten or ride the Carretera Austral?” I asked. “No, it is not on Ruta 40 .,..“… “ah but it is very beautiful with lots of water and the trees shelter you from the wind” I answered. “No” he said, “I think the Carretera is a bad road, it is too slow“. Somewhat more imaginative than his previous replies but I said no more, thinking only “bah, you’re welcome to Ruta 40“. Down here Ruta 40 is mostly monotonous windswept desert for a very long way… pretty much as it is in the north, just colder. For cycling.. it sucks… in my opinion ;-) 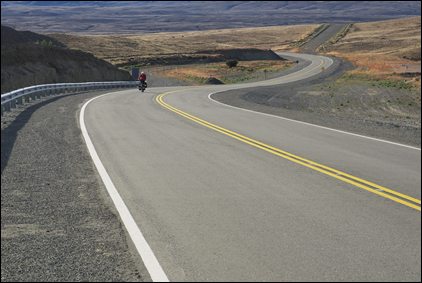 the timing of the arrival of the Swiss Ruta 40 guy was perfect for this photo!

With 30km to go to El Calafate the wind returned.. and from its usual direction, the west. Unfortunately the road at this point goes west too. I grovelled, arriving in town around 3pm. I met Jonathan & Monica on the way in, one of the Swiss couples I’ve been playing leapfrog with over the last few weeks. They sensibly took 3 days to cover the 220km from El Chalten. I could barely stand up when I got off my bike.. but when alone with nothing else to do but ride I just ride…. 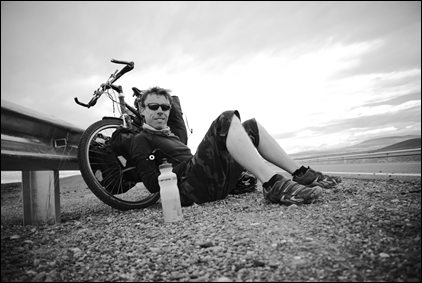 As for El Calafate… well.. it is hideously touristy with shop names like “Del Turista Chocolates” and “Arte Indio” selling mass-produced souvenirs, and the streets rustle with large manicured people adorned in colourful gortex and daypacks worn on their chests with Nikon camera straps proudly displayed. It is a good thing they are here because it means they are not elsewhere.. in the quiet little pueblos I like so much. One can walk into a shop and hear an Englishman talking to the locals in the same slow, loud & patronising English used by the plebs on the Costa del Sol, as if speaking like this somehow mitigates their laziness in not even bothering to learn a few cardinal numbers.. despite which most of the locals speak English anyway. Oh and when will they all wake up to the fact that the tap water is fine and buying armfuls of plastic mineral water bottles is not sound practice :-| I wish I had stayed a little longer in El Chalten which is still a mere pueblo with a bakery and mountain shop. Perhaps the lack of ready cash there is a good thing. There is a mitigating factor in El Calafate however.. food. Lots of it. Feeling in need of a serious meat fix I headed to a parilla advertising an all you can eat for US$15. It was worth it. A hungry cyclist can eat quite a lot. I tucked into chunks of beef, spicy sausage, ribs of lamb and a chicken breast while watching a lady in North Face & heels, gold jewellery clanking, take photos of her tour group, her dinner, the salad bar, the waiter, the tablecloth and the grill.. and quite possibly the toilets too :-) 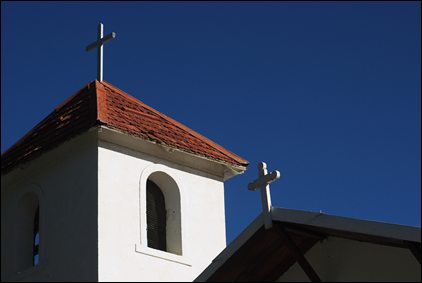 Calafate has a pretty little church at least amongst the modern restaurants and souvenir shops….

As I write this by my tent with a mug of coffee I am thinking today is a good day for washing some clothes and drinking coffee. I have to decide if it is worth the effort of washing my riding shorts… probably not, the dirt is so ground in it may as well stay there. I may also try and find a new lucky hat but so far all I have seen are caps emblazoned with “Patagonia” or “Ruta 40” or “Tourist Inside”.. well, maybe not that latter but as good as. Tomorrow I may visit the glacier 80km west.. or I may not. It is said to be stunning but I have climbed on, in and over many glaciers in my time… and a copy of the Lonely Planet I saw in Cochrane described it as a “life-affirming experience” which is typically the kind of bollocks wheeled out by the LP that makes me want to go in the opposite direction…  The wind is forecast to be 100km/hr later so riding there could be … tedious.

From here I want to go south then west to Torres del Paine. The forecast online for the next 5 days is for southerly winds…. On the map the road looks hard.. not that it is anything unusual, 4 or 5 days, depending on winds, of ripio across the pampa. No supplies and possibly very little water. I have not yet met a single cyclist that has gone this way unfortunately… other cyclists are the best source of reliable road information. Drivers haven’t a clue ;-)

p.s. to save you the trouble of telling me… yes I know I am a tourist too and I write like an arrogant cock sometimes… I enjoy it… ;-)

p.p.s oh I just remembered something else… on ruta 40, a generally empty road I was nearly taken down by a pair of Landcruisers passing at high speed just inches away. They were emblazoned with huge stickers saying “Expedición Ruta 40″… now, I always thought the idea of an expedition was to face a challenge or explore something new… to drive a Landcruiser from the north to the south of Argentina on ruta 40 at the time I did not think met those criteria, though now I realise of course it is a challenge… that of not falling asleep at the wheel and killing a few cyclists along the way. Pillocks…