I’m not one of those lucky folk that is just ace with languages and that can switch effortlessly from language to language, rather I have to work hard to make a language stick and need to use it frequently to be even remotely  comfortable with it, although stuff does come back to me eventually… so having been working hard to add some Arabic to my vocabulary while at the same time scraping the rust off my French, it was a bit confusing to find myself having a lengthy conversation in Spanish with a chap selling apples at the market in Aoulouz…messed me up properly, or as the locals say “my head was full of couscous”. I struggled to switch back to French after that…. 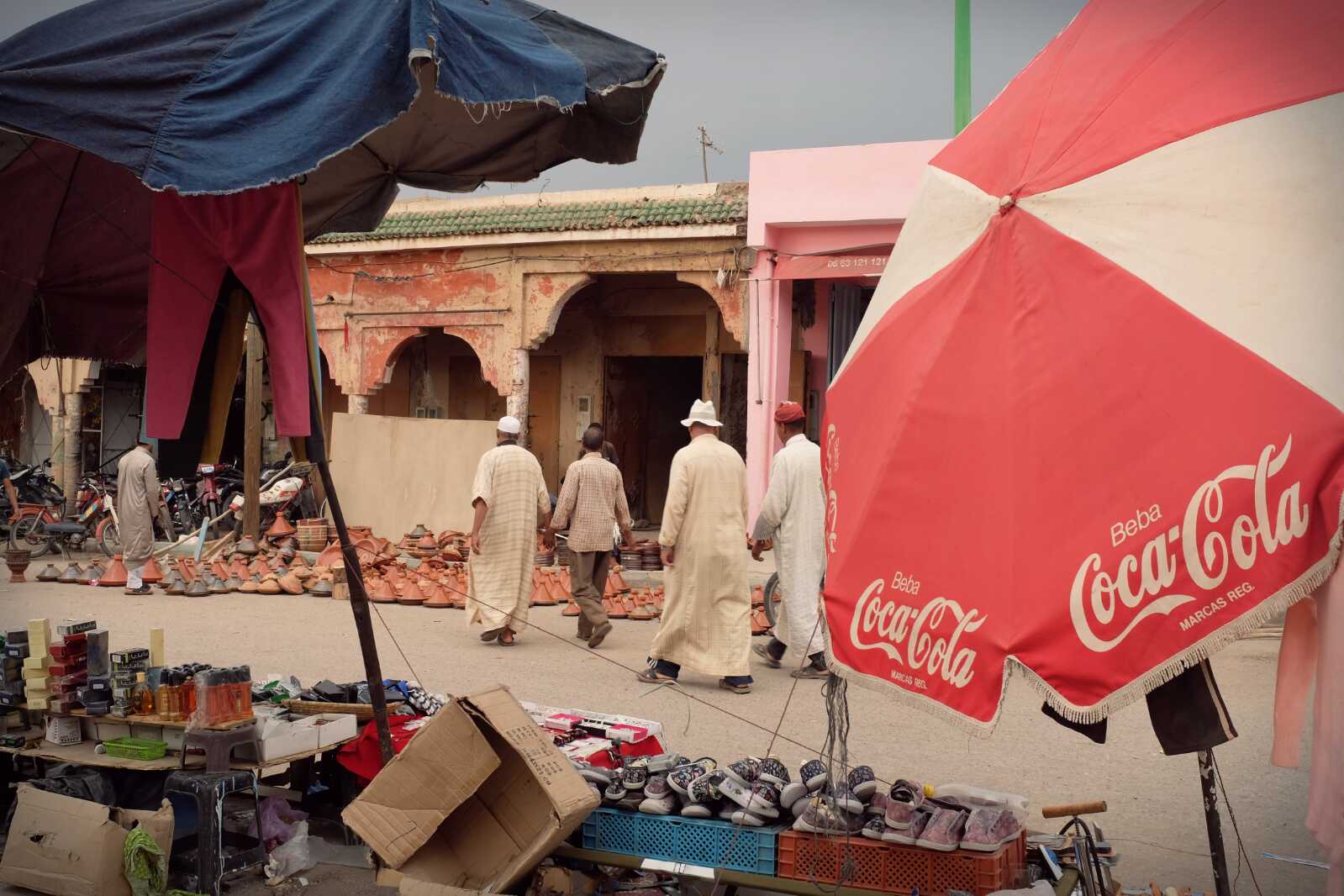 I enjoyed my day off in Aoulouz. I always experience a sense of wellbeing when I find myself in such genuine, out of the way places. There are no tourists, it is just a regular Moroccan town full of bustle and many opportunities to enjoy a pot of mint tea with friendly locals. I met Abdoul while buying bananas from an adjacent cart and subsequently met his friends and most of his family while sat on a crate behind his cart. So often one meets bright people in unexpected places. Abdoul has no schooling but is self taught and has 6 languages if you include Arabic and his own Berber dialect. Part of his motivation being some work with tourism-related activities further north.. camel treks  and the like, and partly just because he likes to. He was keen to practise Spanish… being a bit rusty and lacking for opportunity, like myself, so we passed some time in a somewhat messy melange of spanish and french plus some english when I got totally lost, with breaks only when he needed to sell some apples. We also drank tea. 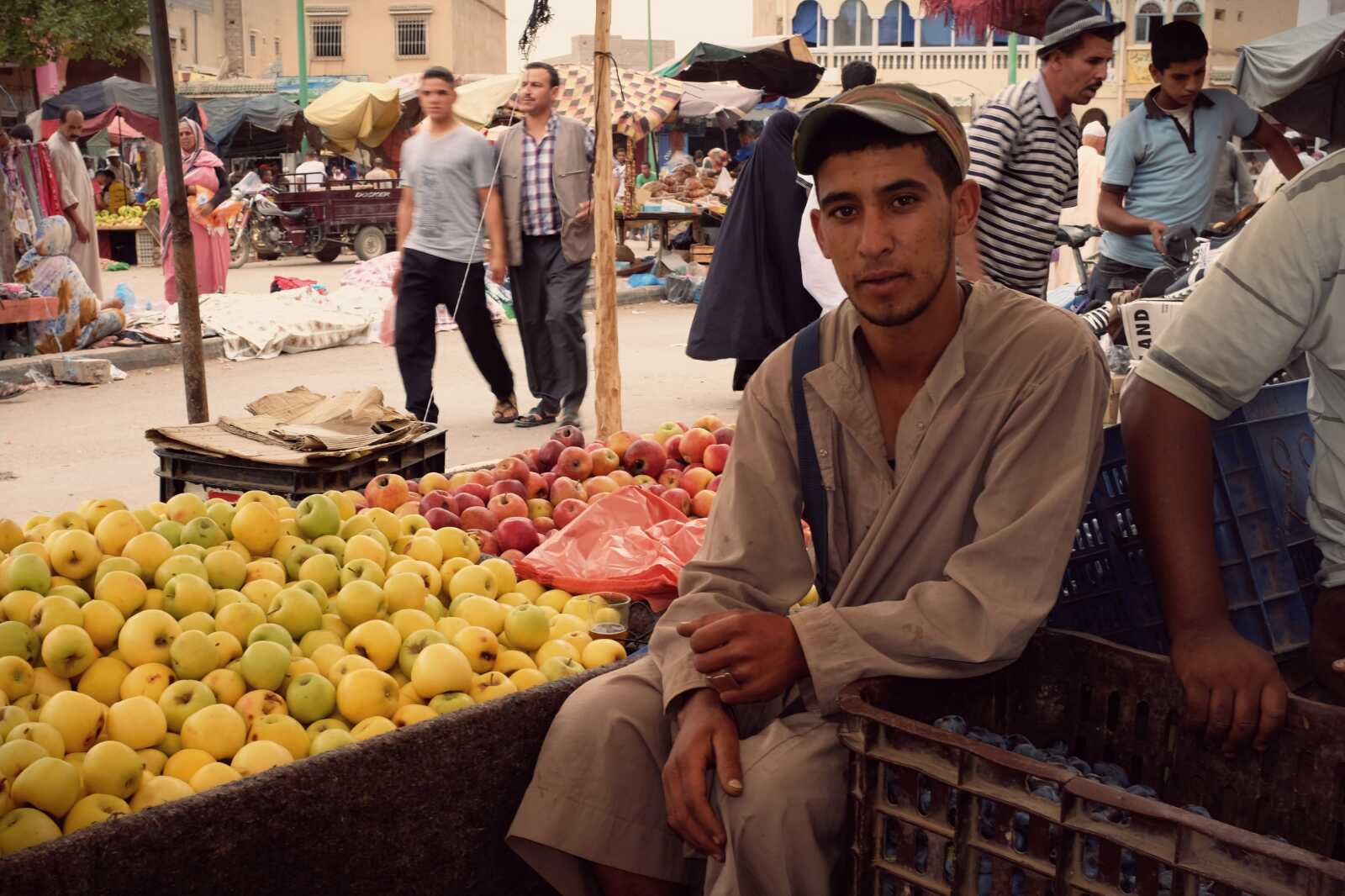 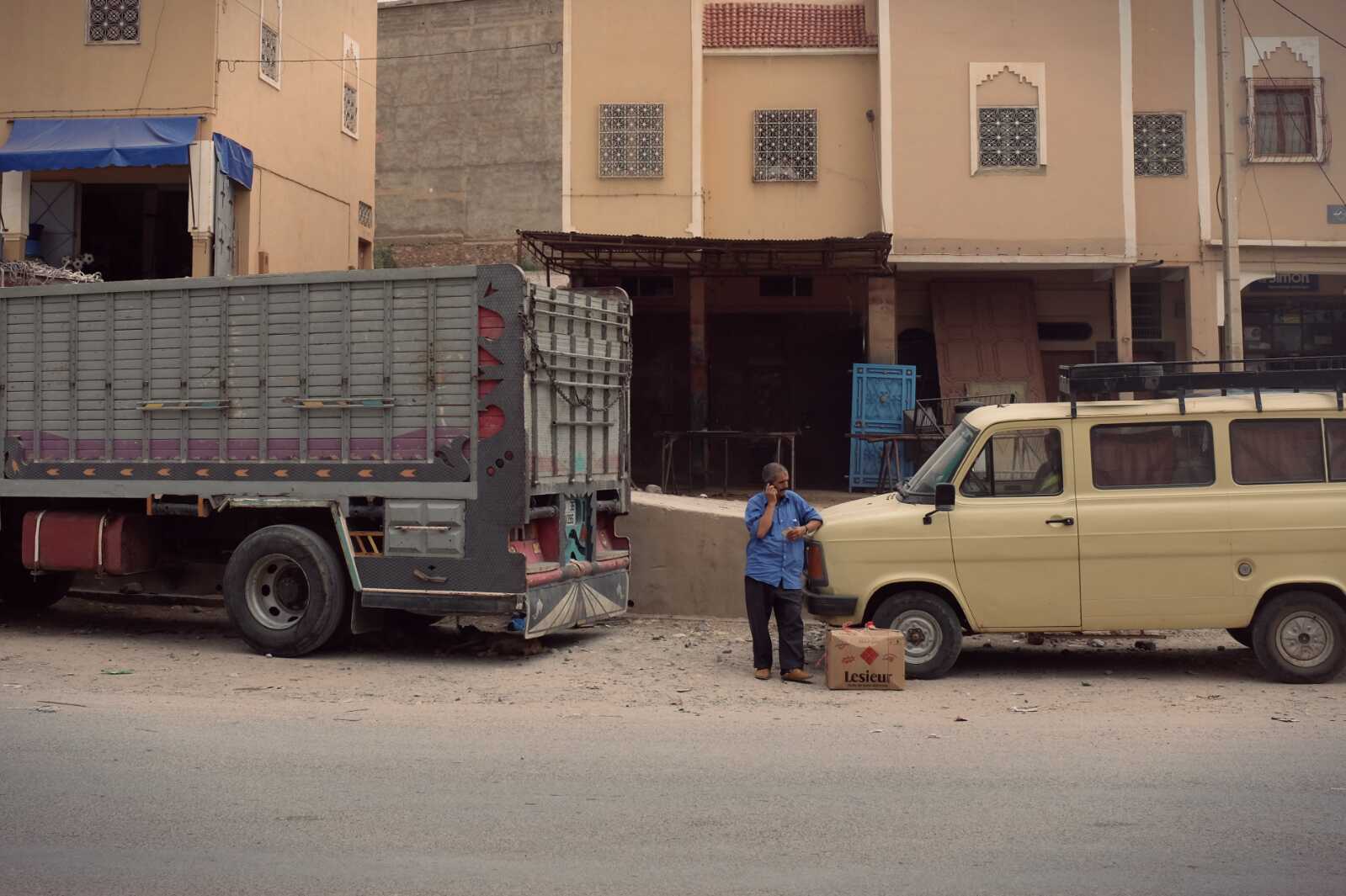 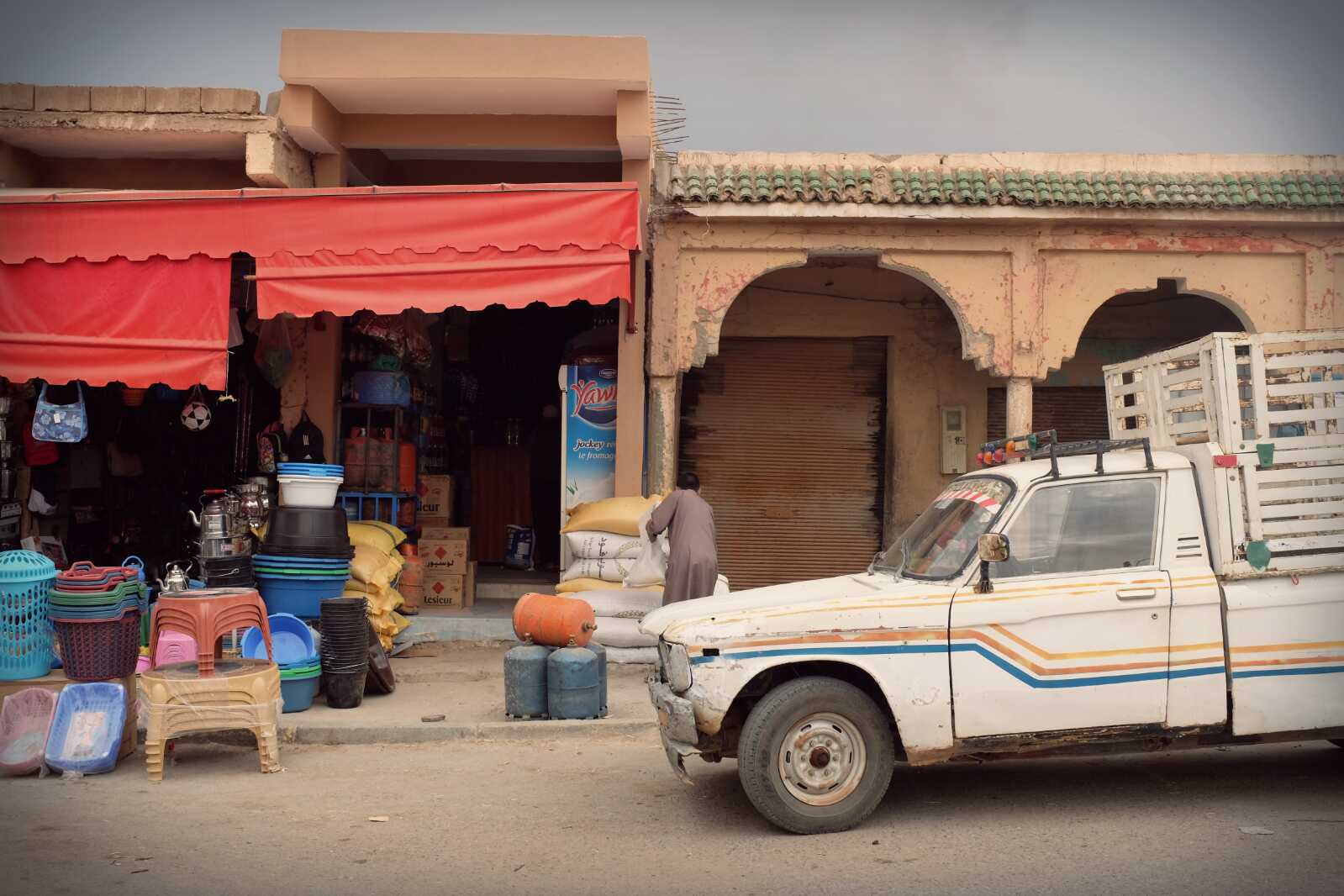 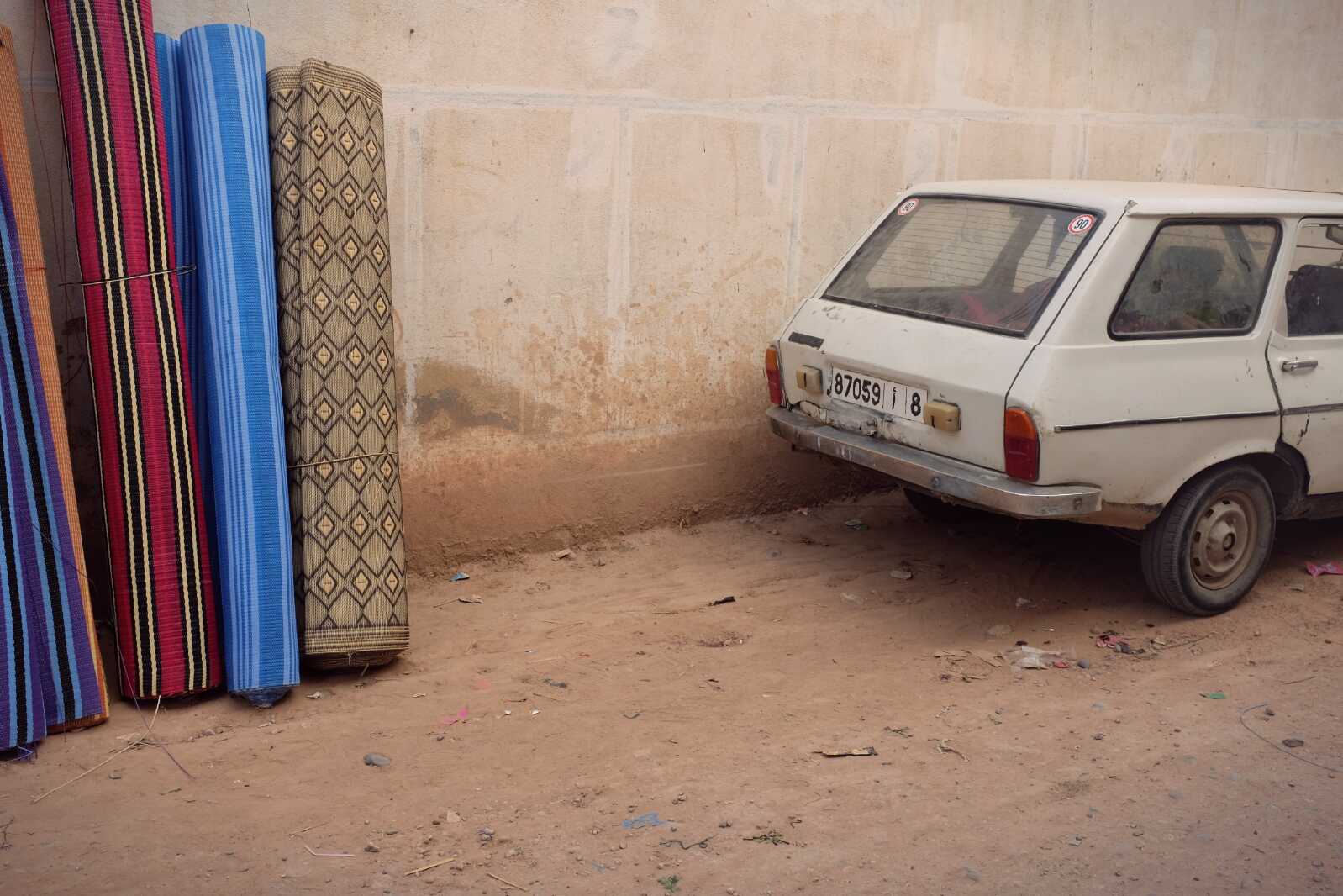 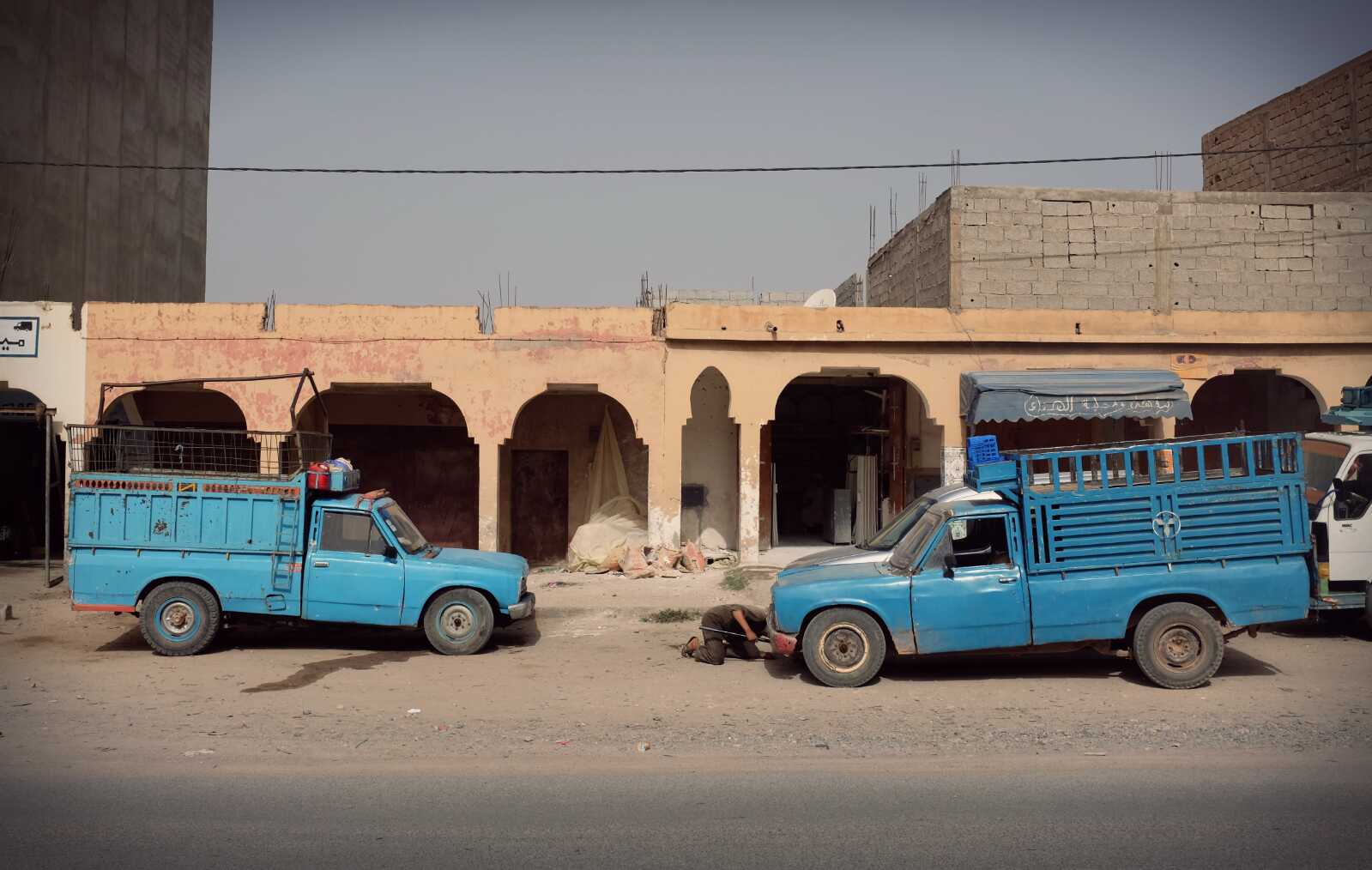 Aoulouz.. a lot of blue pickups 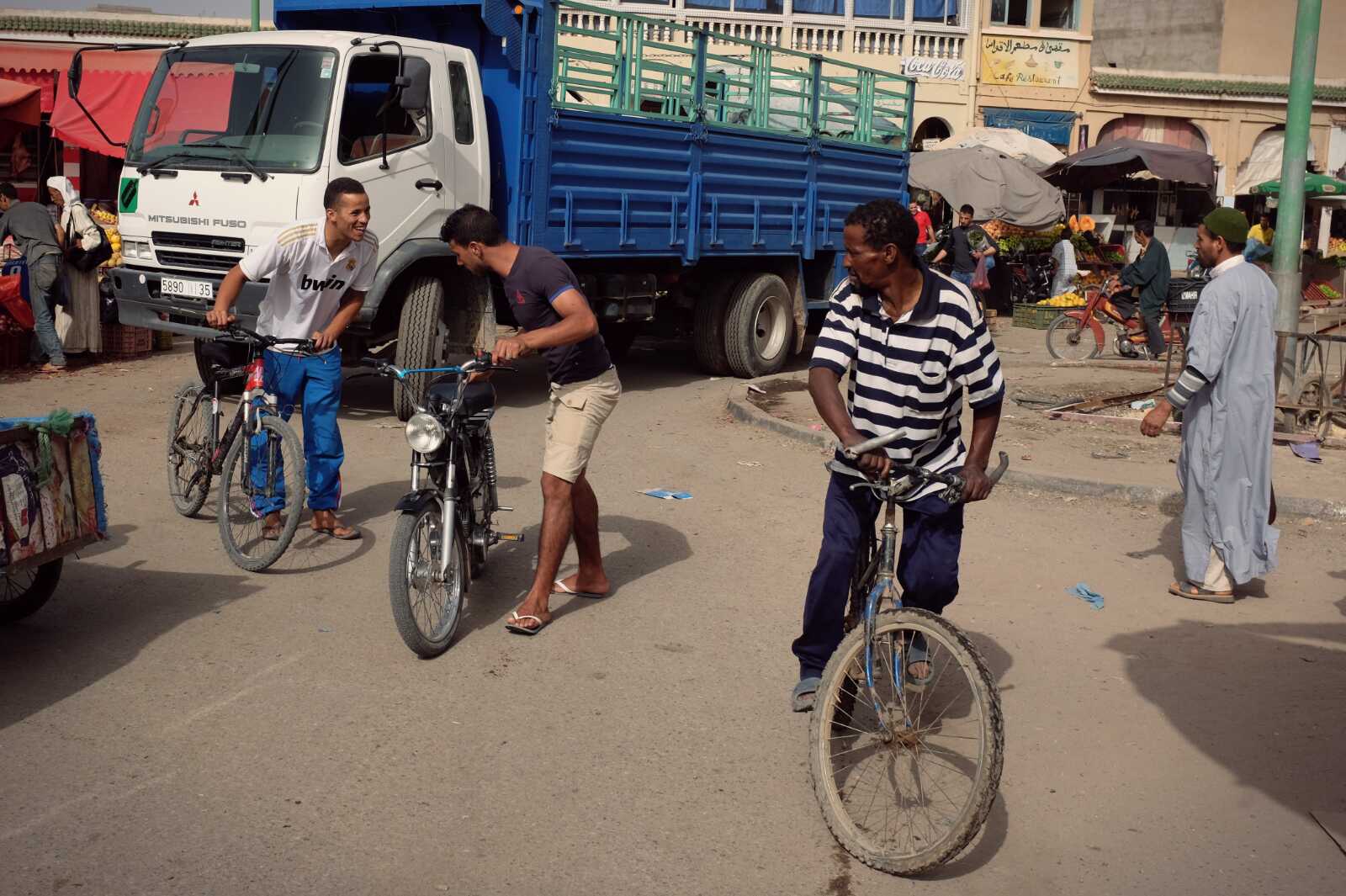 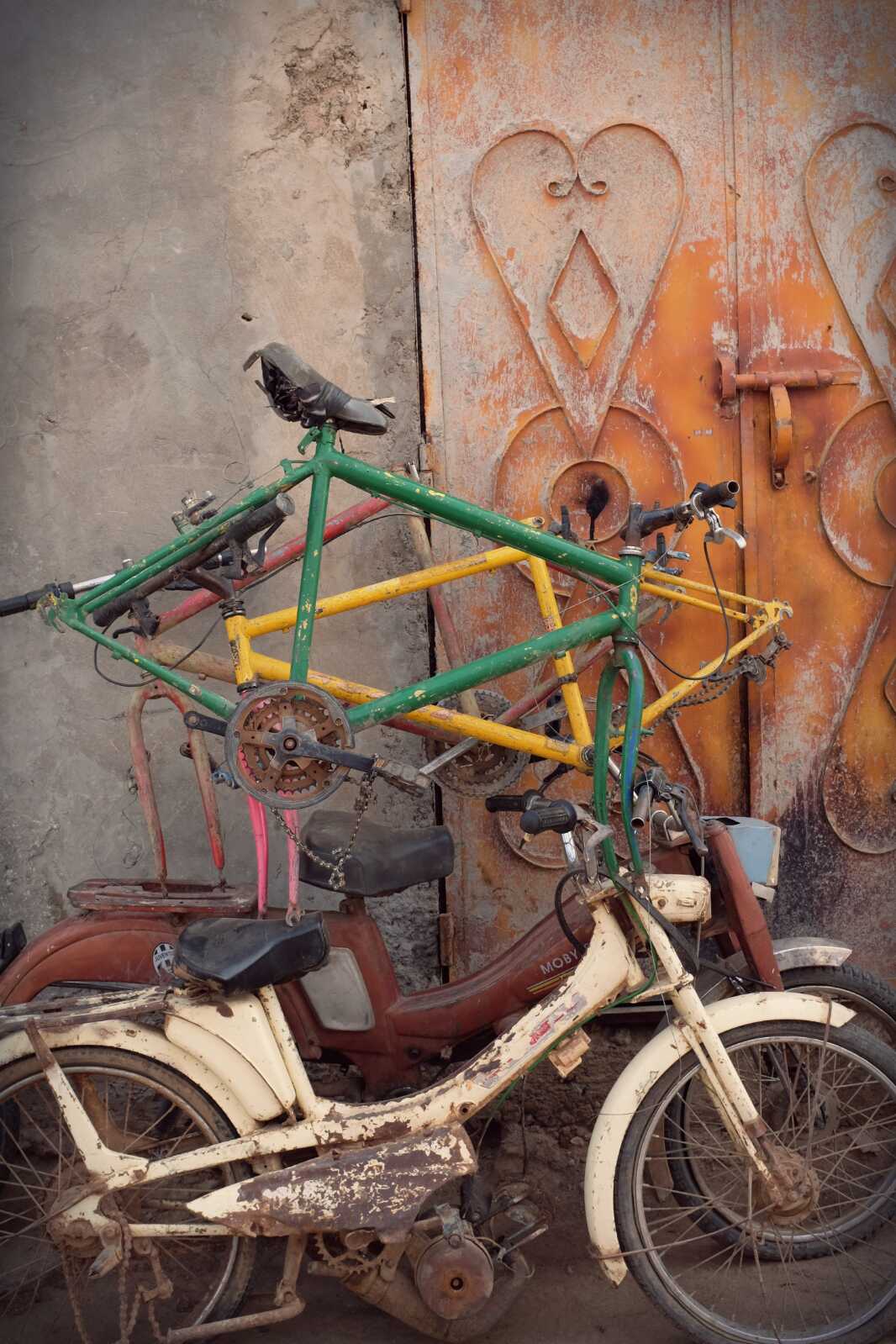 It was a stiflingly hot night and it was severly lacking sleep that I finally got my legs turning for what I decided was going to be a short day by way of continuing recovery from the journey from Ijoukak ….just 40km northeast to the village of Taliouine.. once under way I started feeling better and nearly kept on going but glad I didn’t, I liked Taliouine, in a rather stunning setting at the head of the Souss Valley the main drag was intensely busy, great for people watching, and after a much needed siesta I spent a pleasant evening exploring the village and its kasbah on my bike. Taliouine is also higher than Aoulouz, not a great deal but enough such that the intense heat of the afternoon melllows into a wonderful cool as the sun drops towards the mountain tops.  I was also able to wash some clothes, leaving enough sediment in the bucket for  vegetable garden… the hot, desert wind of mid-afternoon dried everything in minutes. 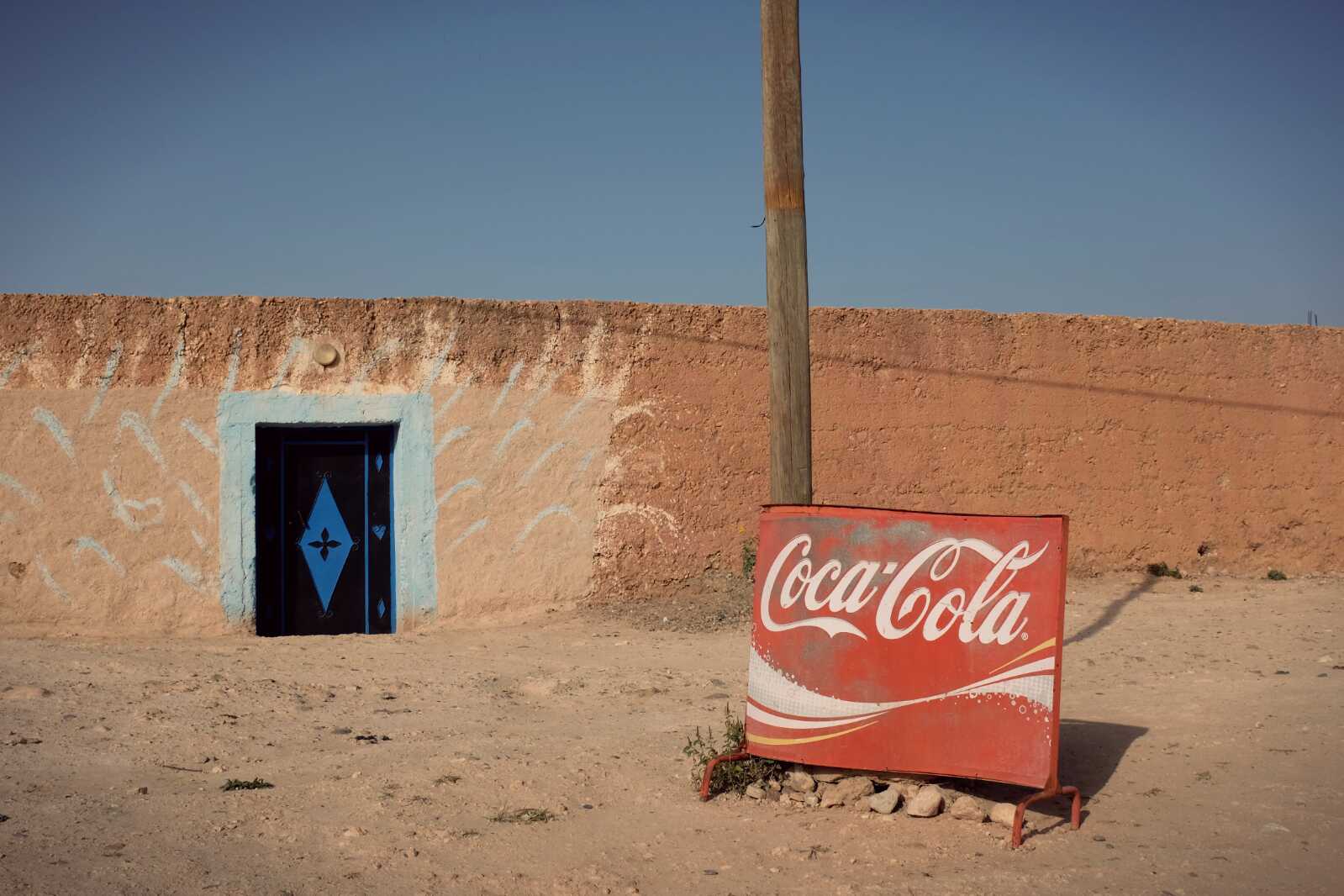 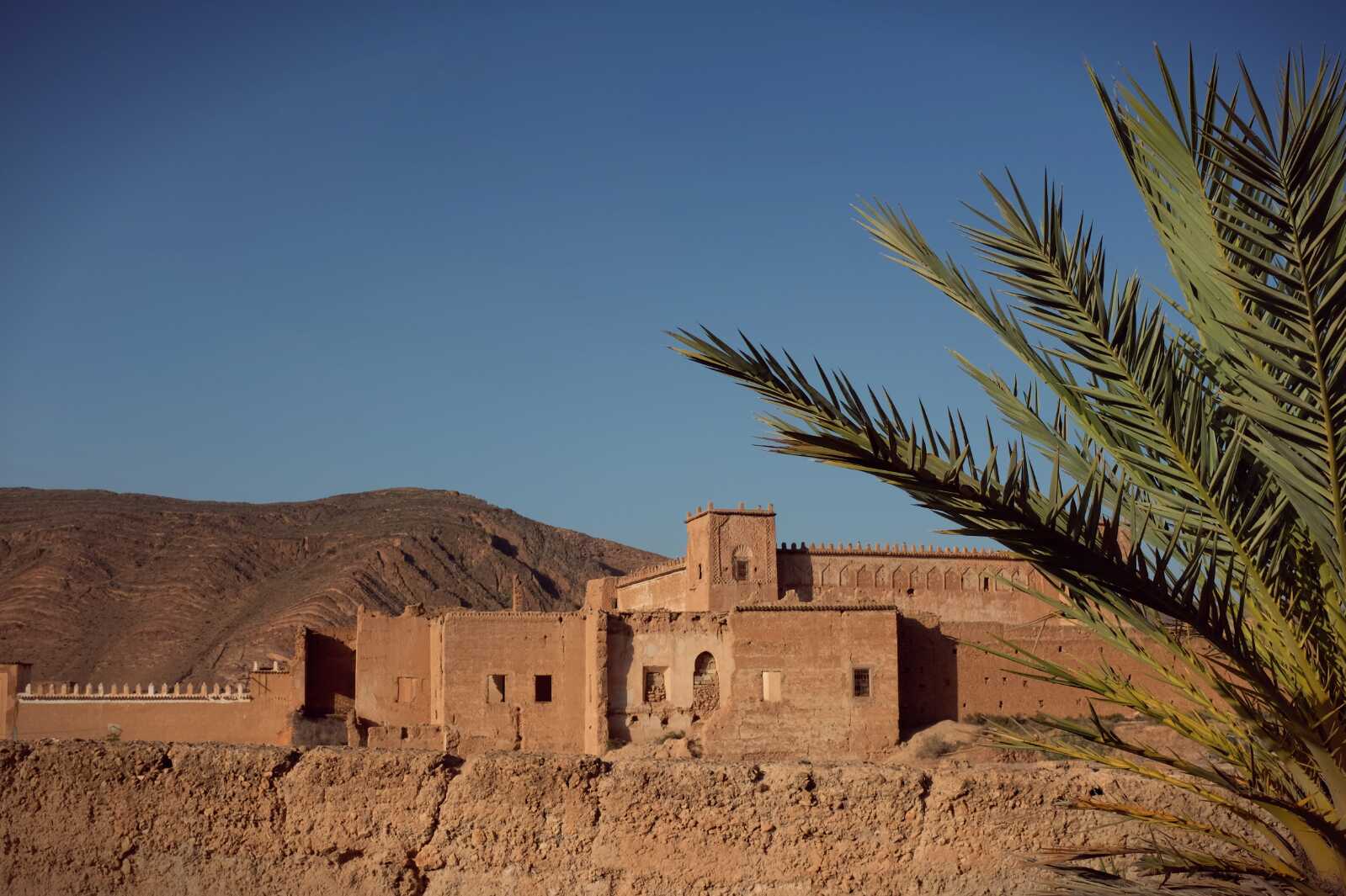 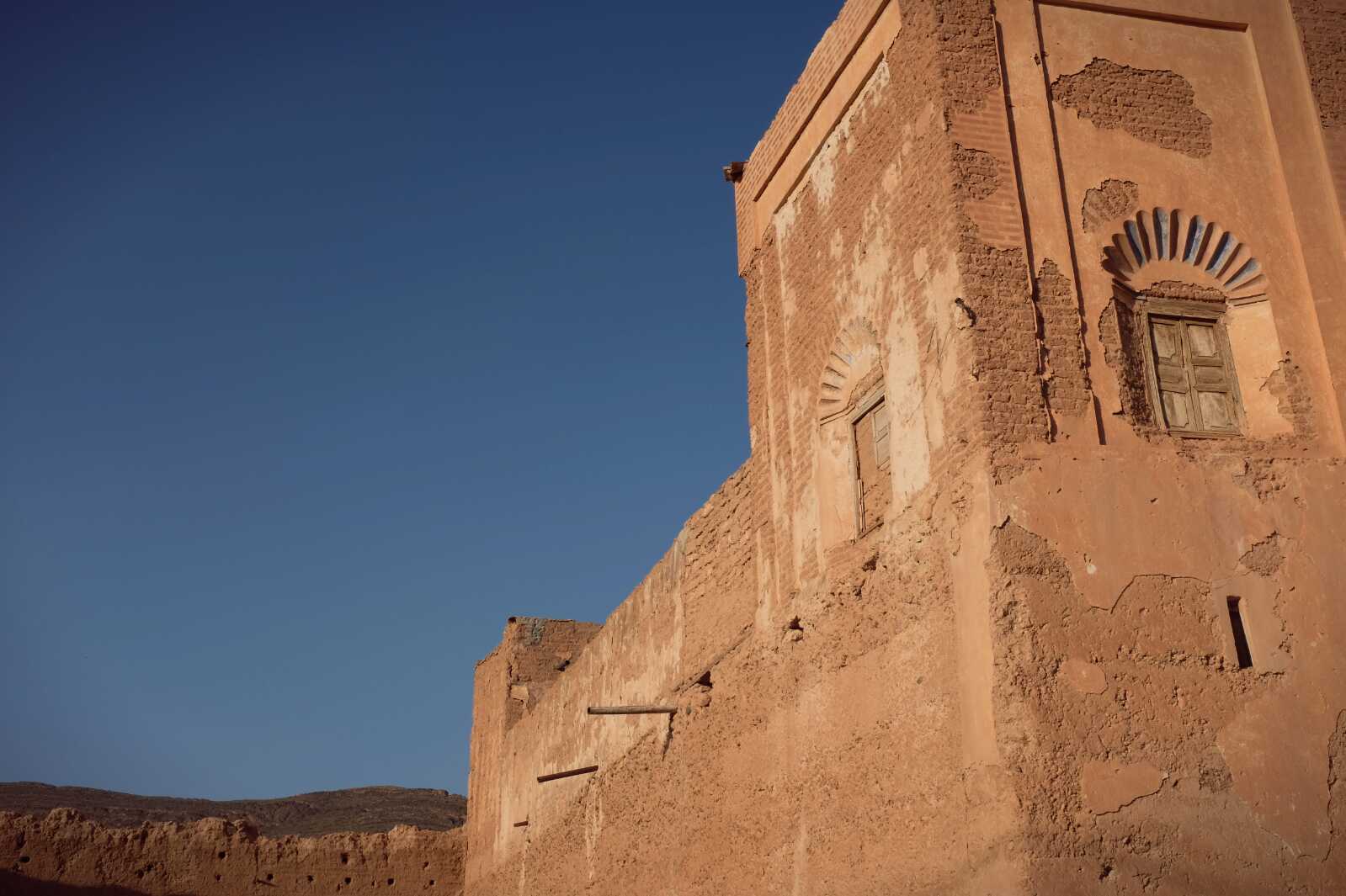 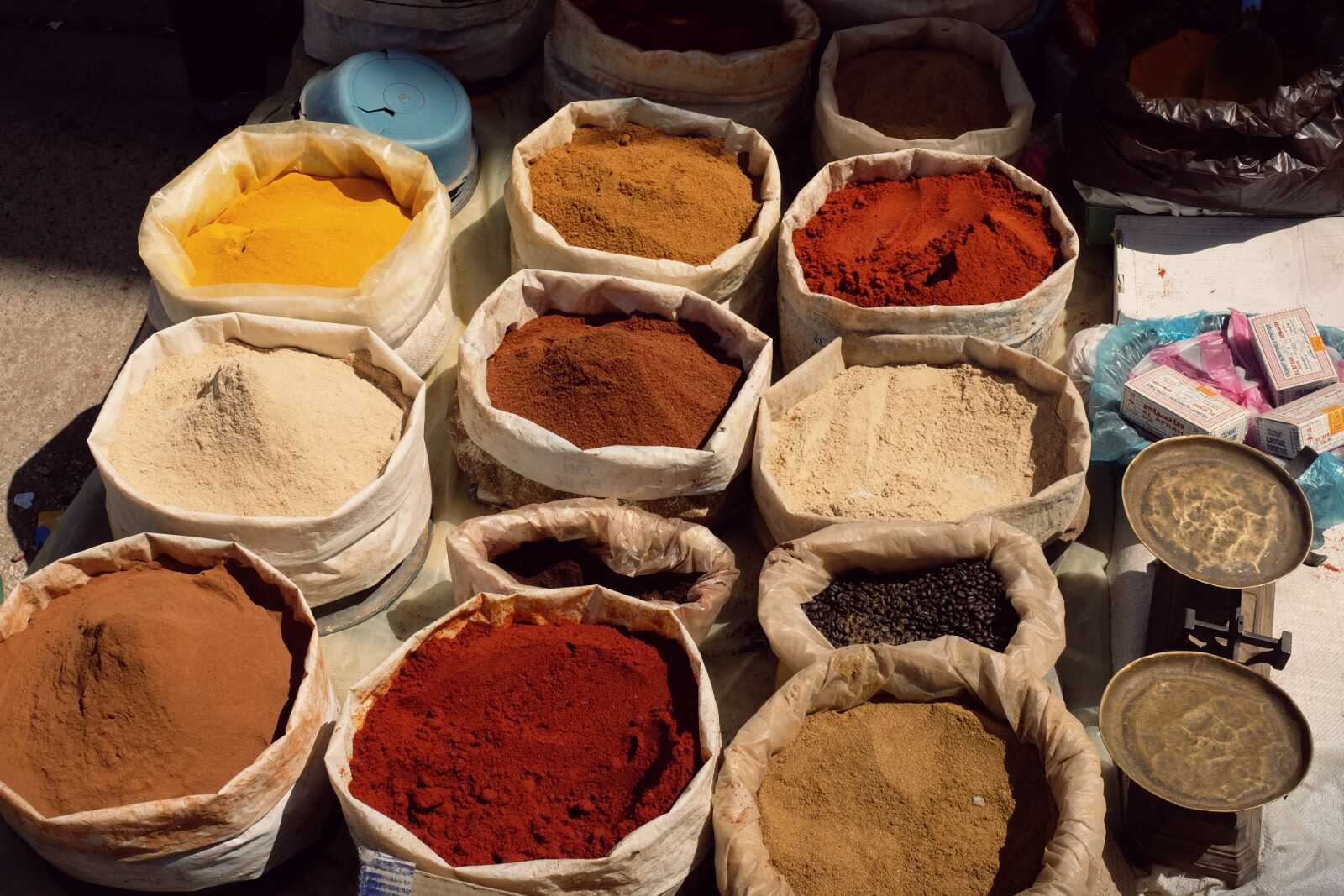 Taliouine.. spices for sale by the roadside 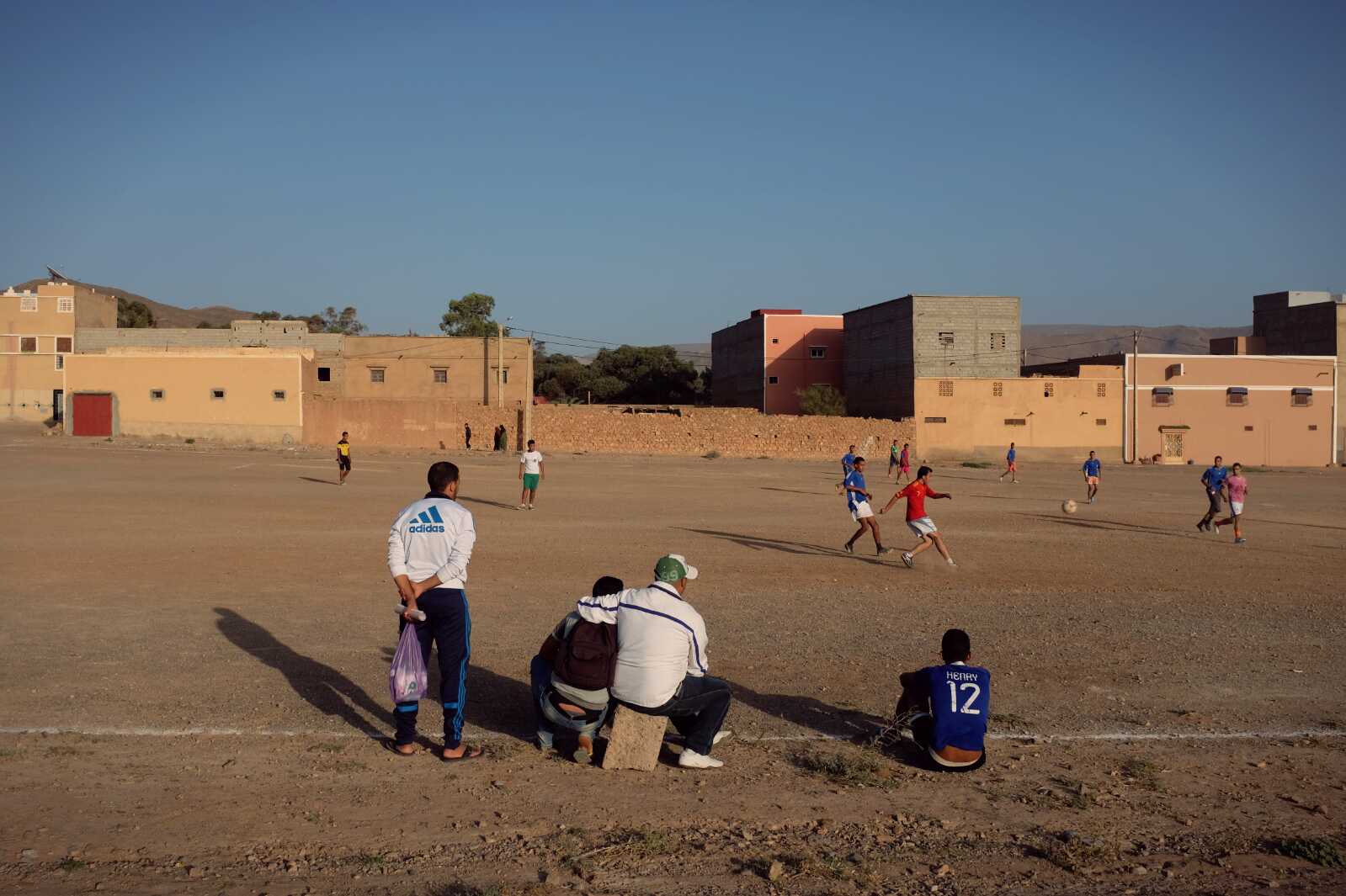 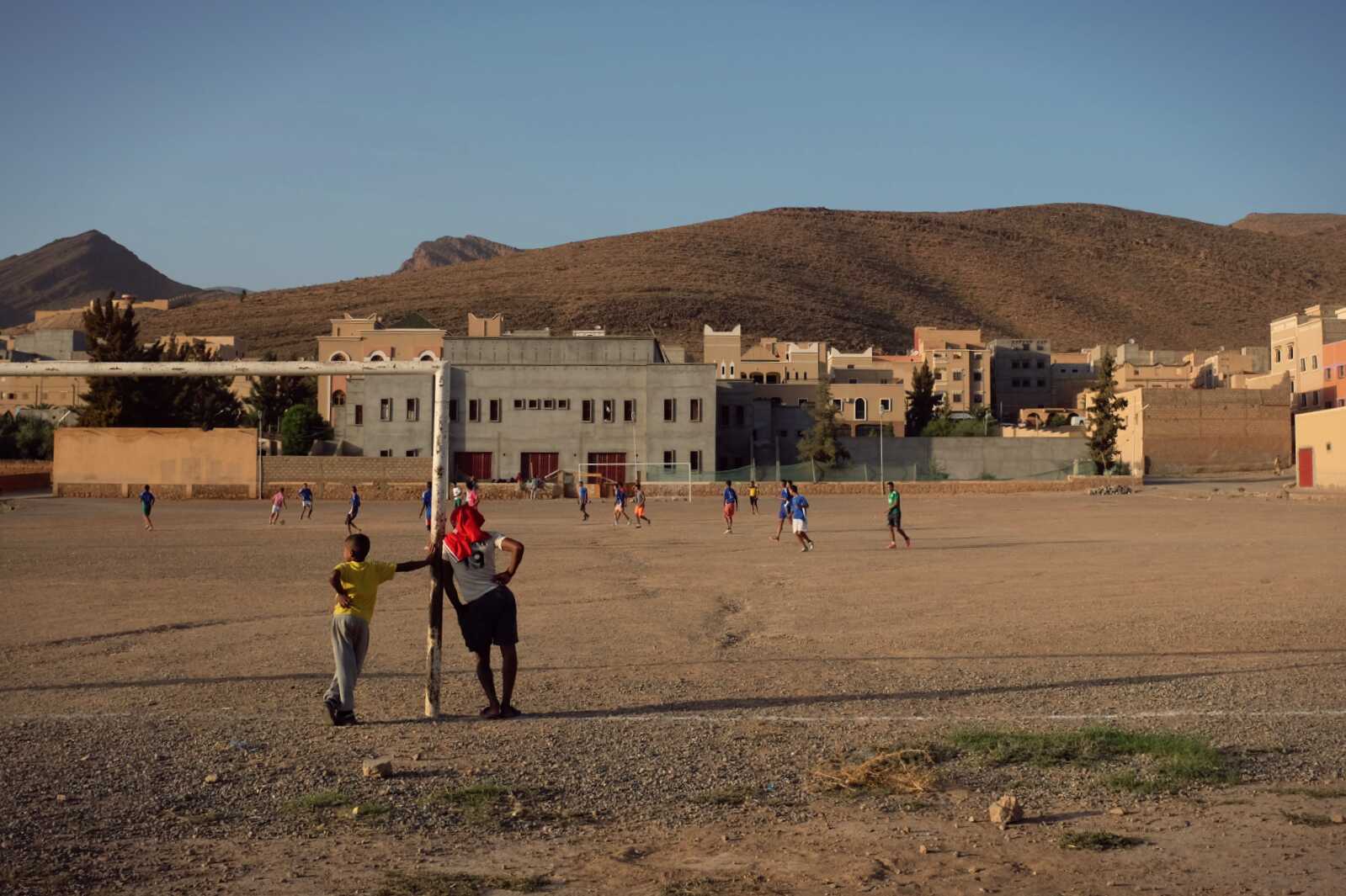 Leaving Talioune things went slightly awry again… riding into the village to stock up on supplies for the journey ahead everything was closed and not a soul in sight… I’d completely forgotten about the three day religious holiday Abdoul had mentioned… so quickly nipped back to the pad I had stayed at to scrounge what I could… as I arrived, along with millions of sheep all over Morocco, one was coming to a sticky end in an easterly direction behind the hut I’d slept in. I was happy with some biscuits and cake. 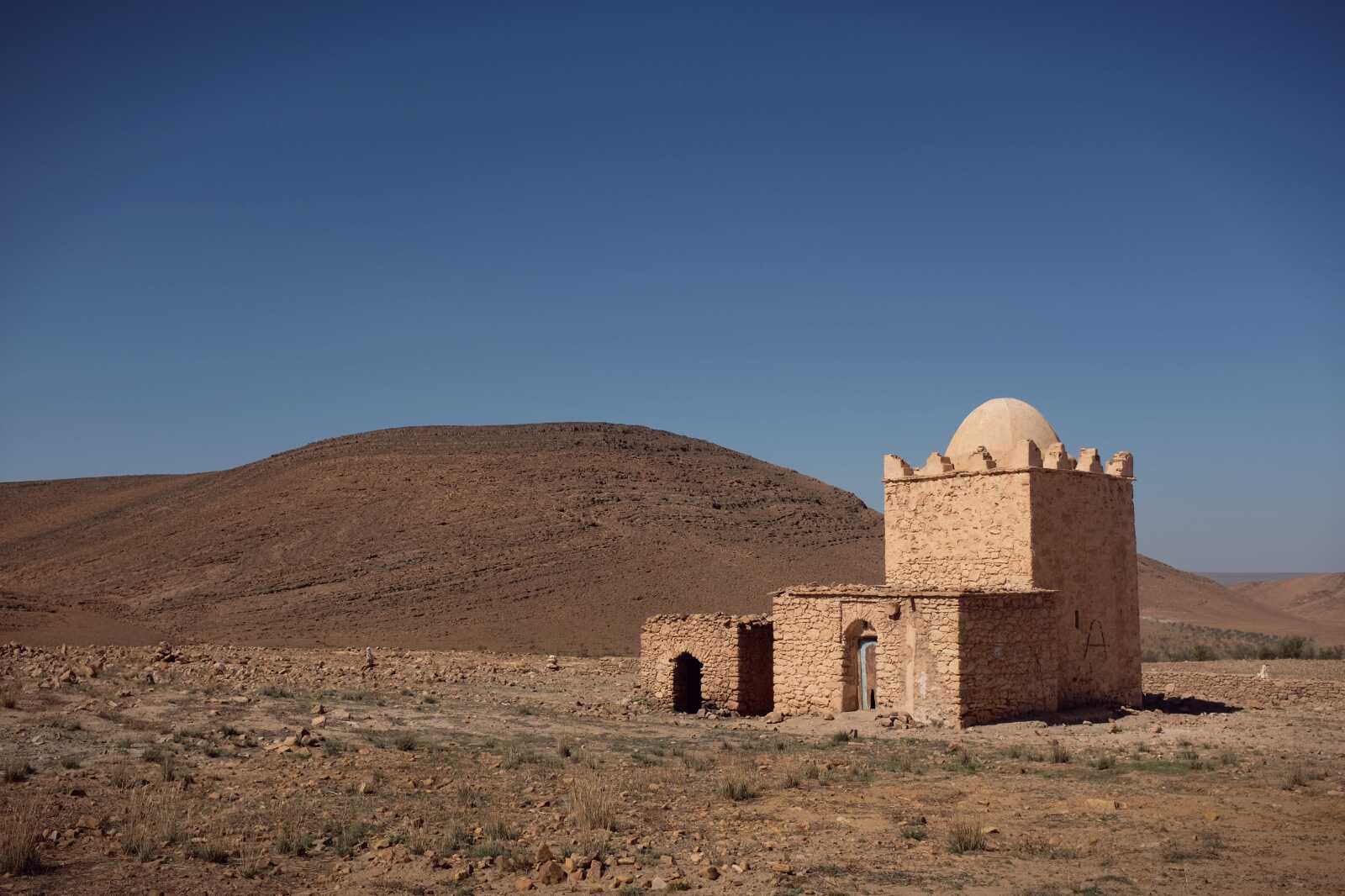 The holiday had one benefit..the road was utterly devoid of traffic.. a car with French plates came past after about 10km, and about 1km later I joined them by the roadside for tea, a chap with his grandfather enroute from Perpignan to join the rest of the family in their small village south of Talioune. 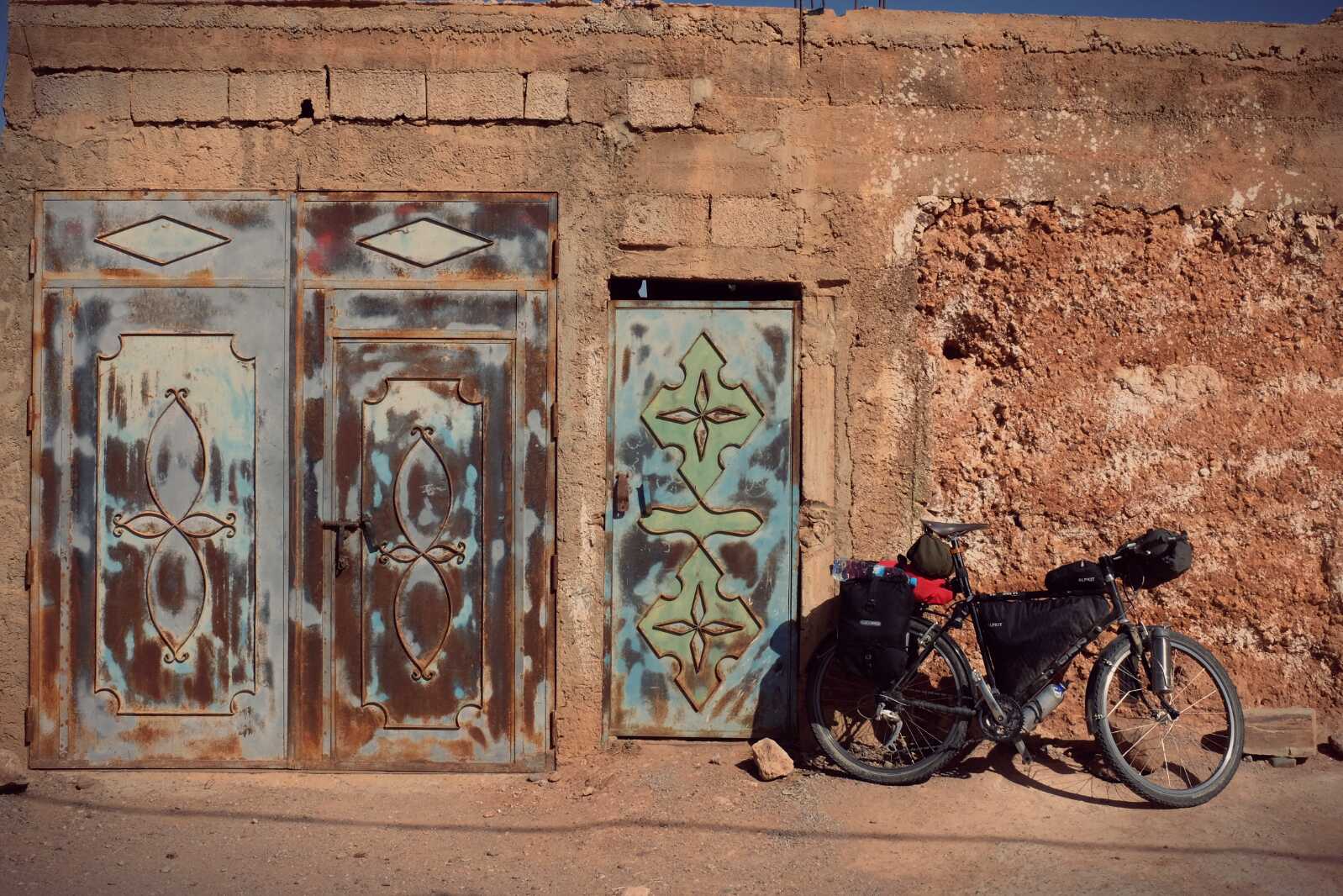 From Taliouine the road climbed almost continuously for around 40km, steeply  at times, the gradient made worse by the very strong headwind. The wind did get a bit tedious but very much took the edge off the heat.. to escape from the wind I lost myself in my iPod as I cruised through the spectacular, high desert scenery. 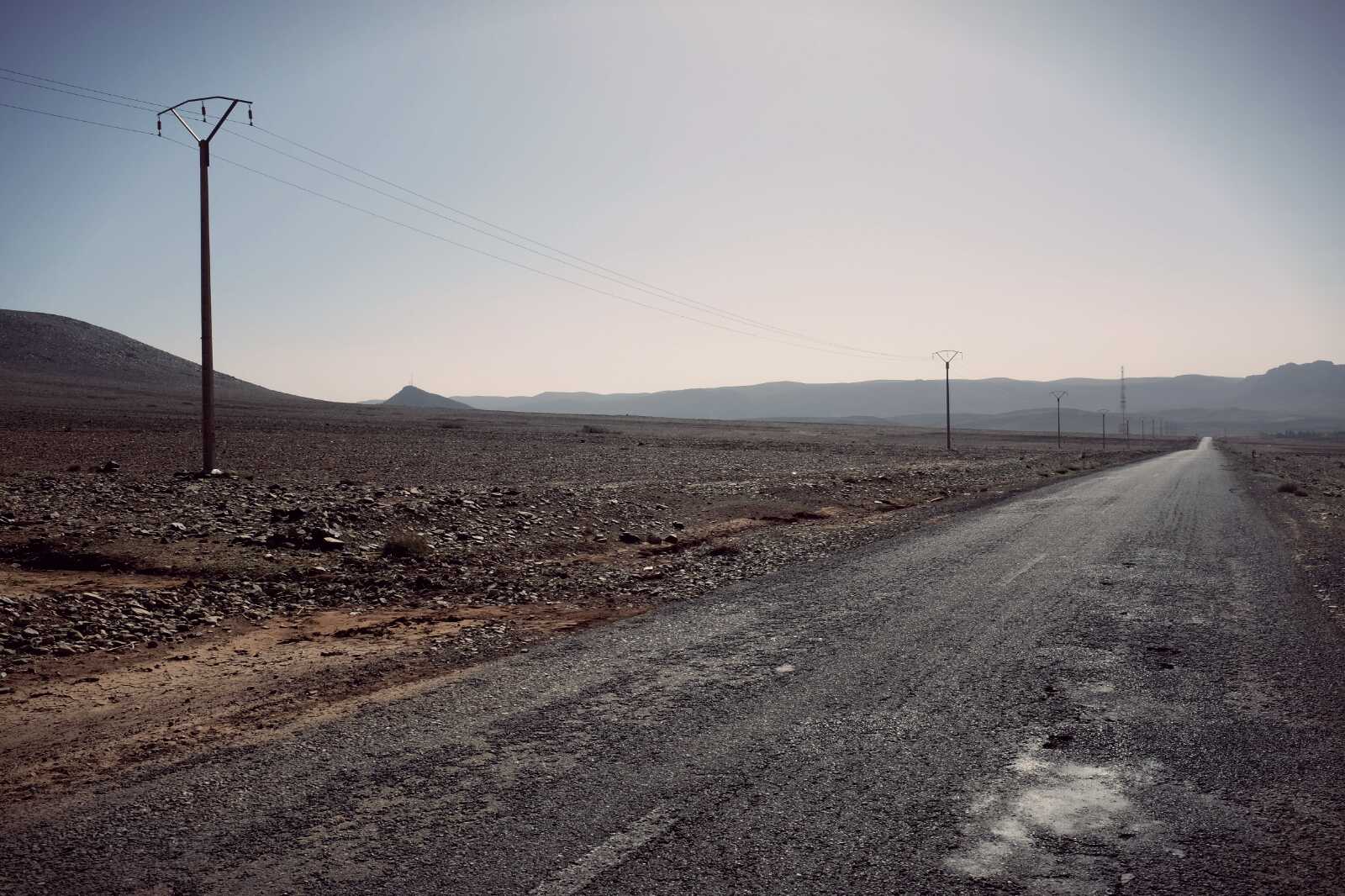 the road from Taliouine 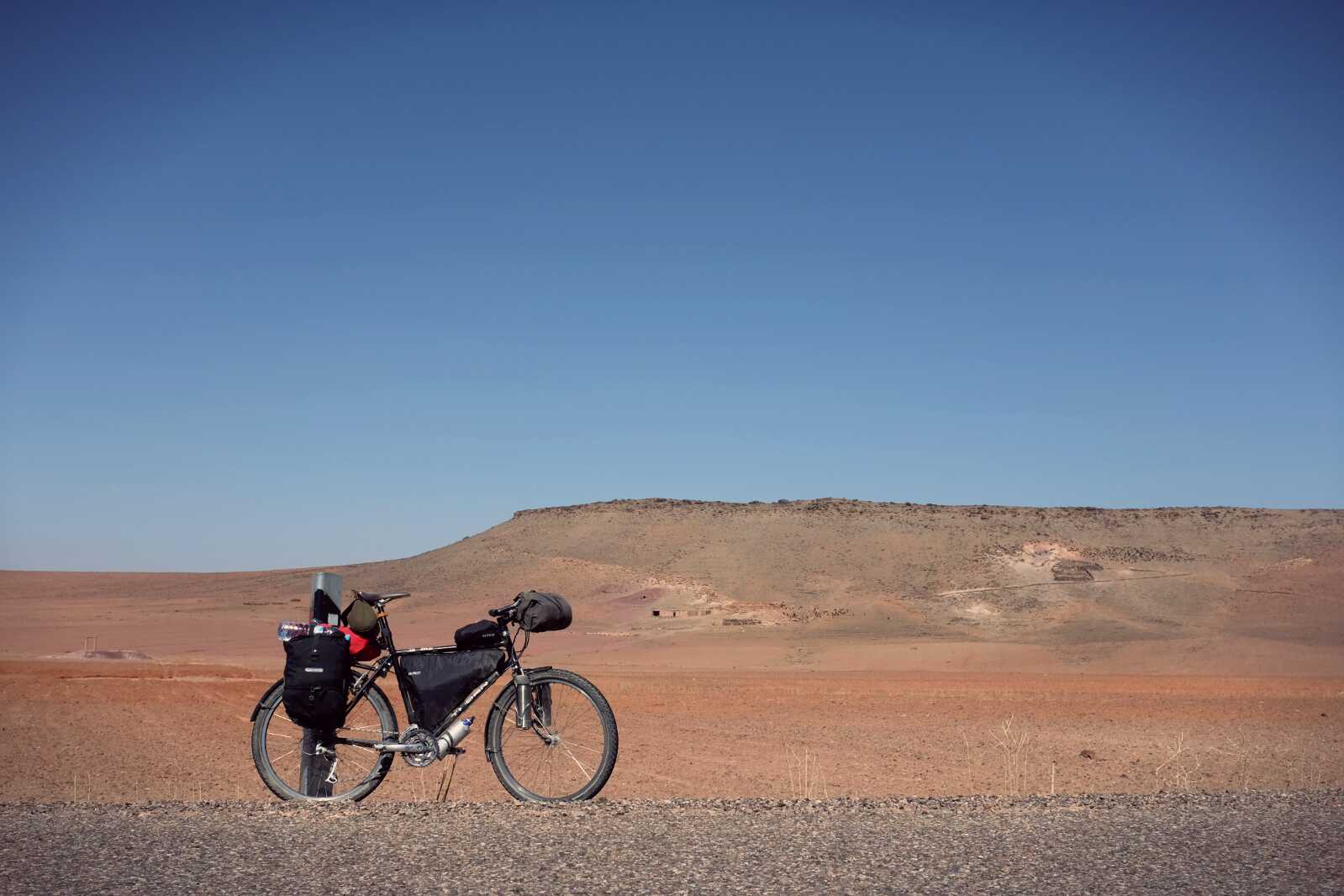 It is only 88km from Talioune to Tazenakht but the wind and the climbing made it a hard day… and rolling into Tazenakht at the end of it was very much a Mad Max experience.. tyres crunching over the accumulations of desert grit in the streets, not a soul in sight and every business shuttered… if Morocco had tumbleweed… it doesn’t but it does have garbage.. and Tazenakht had an awful lot of it.. presumably because civil workers packed up early for the hols (at least, I hope that’s what it was)… so it was garbage blowing through the streets instead. 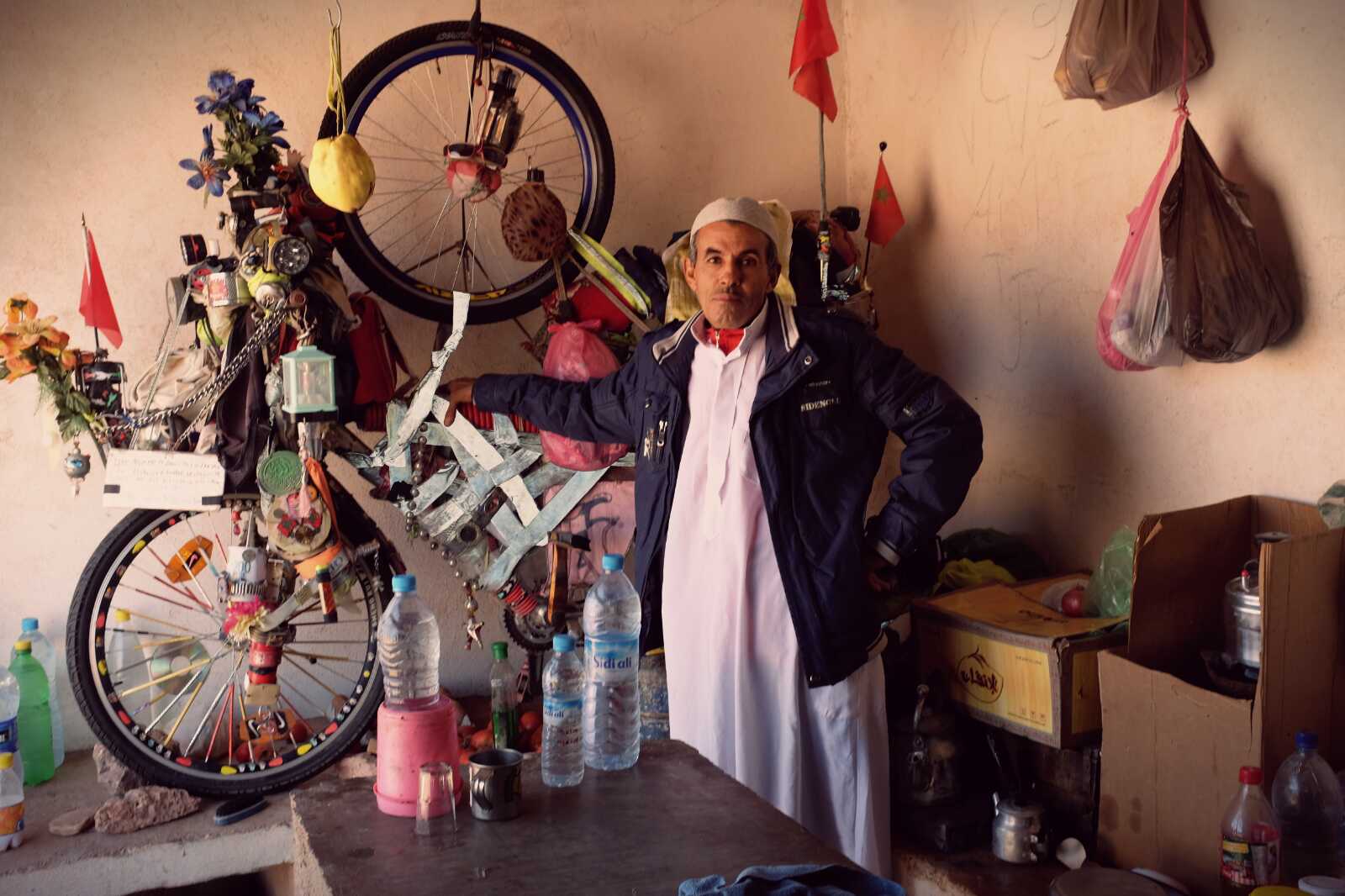 I met this chap living in a hut about 30km from Tazenakht, rode his bike all over Morocco and Mauretania apparently, carrying a lot of shit by the looks of it… Very cool. Inevitably we drank tea. 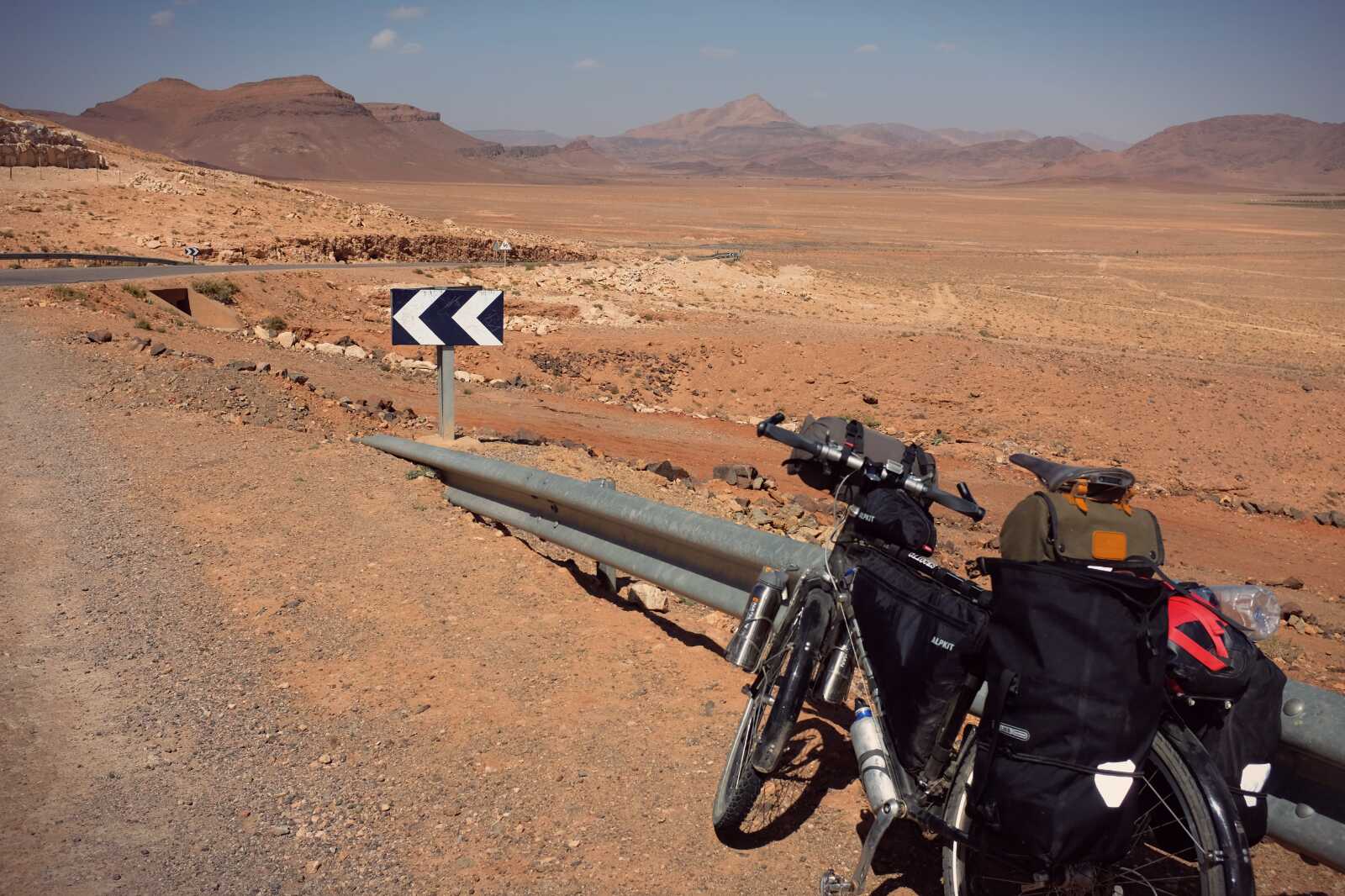 around a bend and the magnificent vista of the desert opened up. Very much one of those addictive goosebump moments.

Having subsisted on dry cakes all day I was exhausted and in need of a good feed and watering, so no other option than to bang on the door of a scruffy looking hotel and hope… :-) I guess I paid a premium at £15 but the chap was friendly and cooked me an ace berber omelette with fries and bread. The hotel was one of those brilliantly ramshackle places that one finds in dusty outback towns… the light didnt work without twiddling the bulb holder till it sparked, the one socket was hanging out of the wall and somewhere along the way the raggedy curtain had lost all it’s rings bar two. I was very happy :-) I spent my evening on a chair out front watching as folk started to emerge from their houses and parade up and down the dusty, garbage strewn street. Some of the young men looking a bit chavvy in an out of context sense strutting in neon coloured adidas tracksuits (best clobber presumably), with women and everyone else in their traditional silks  and jellabas respectively. I could really have done with an ice-cold pack of beer… but here, no chance. 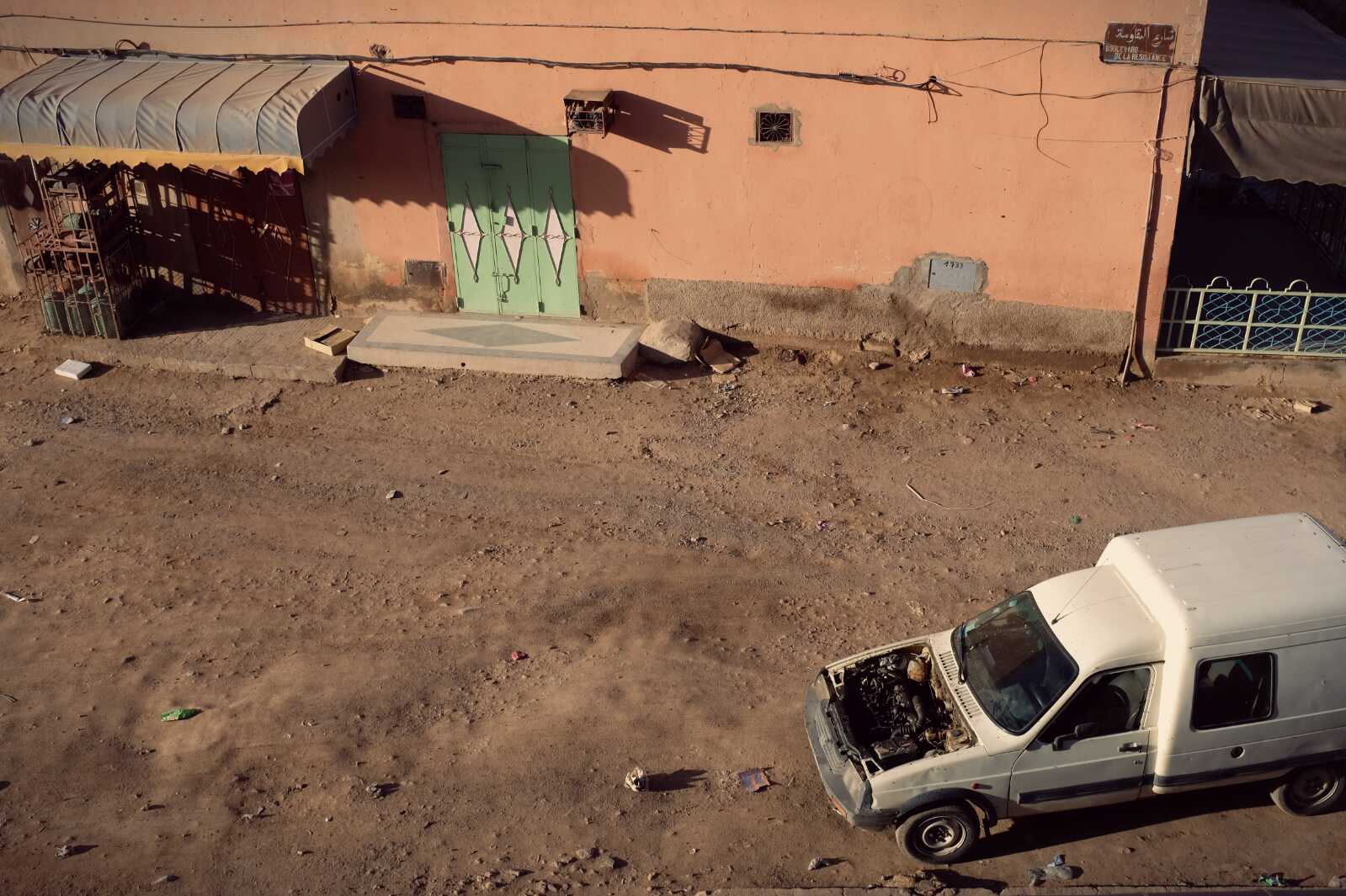 With everything still closed in the morning I scrounged some more cakes and a couple of two day old bread rolls (I do have a jar of peanut butter with me ) … it’s fuel, it works and it reminded me very much of riding through the Andes of Central Argentina… as did the scenery heading east from Tazenakht. It is an utterly spectacular ride from Tazenakht to Agdz at the head of the Draa Valley. Leaving town below dark cliffs the road is asphalt for about 18km then forks… the right fork heads south to the Sahara proper at Foum Zguid and M’Hamid, the left fork turns to a rough dirt piste and heads east north east into the mountains. This stretch was wonderful, and the few folk I saw along the way all stopped what they were doing to wave.. and whenever I stopped…the absolute silence of the desert. 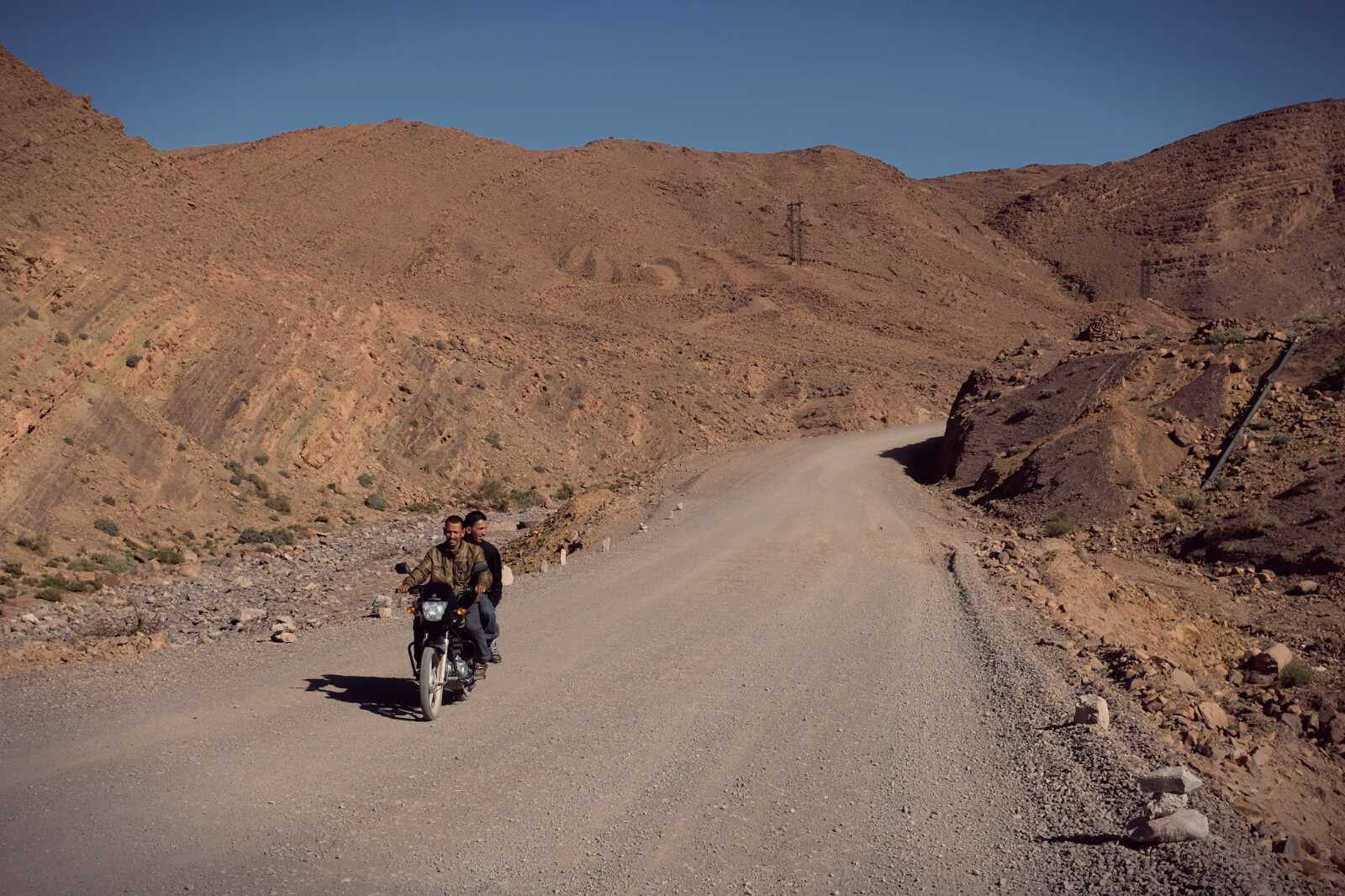 leaving Tazenakht, about the only traffic I met all day 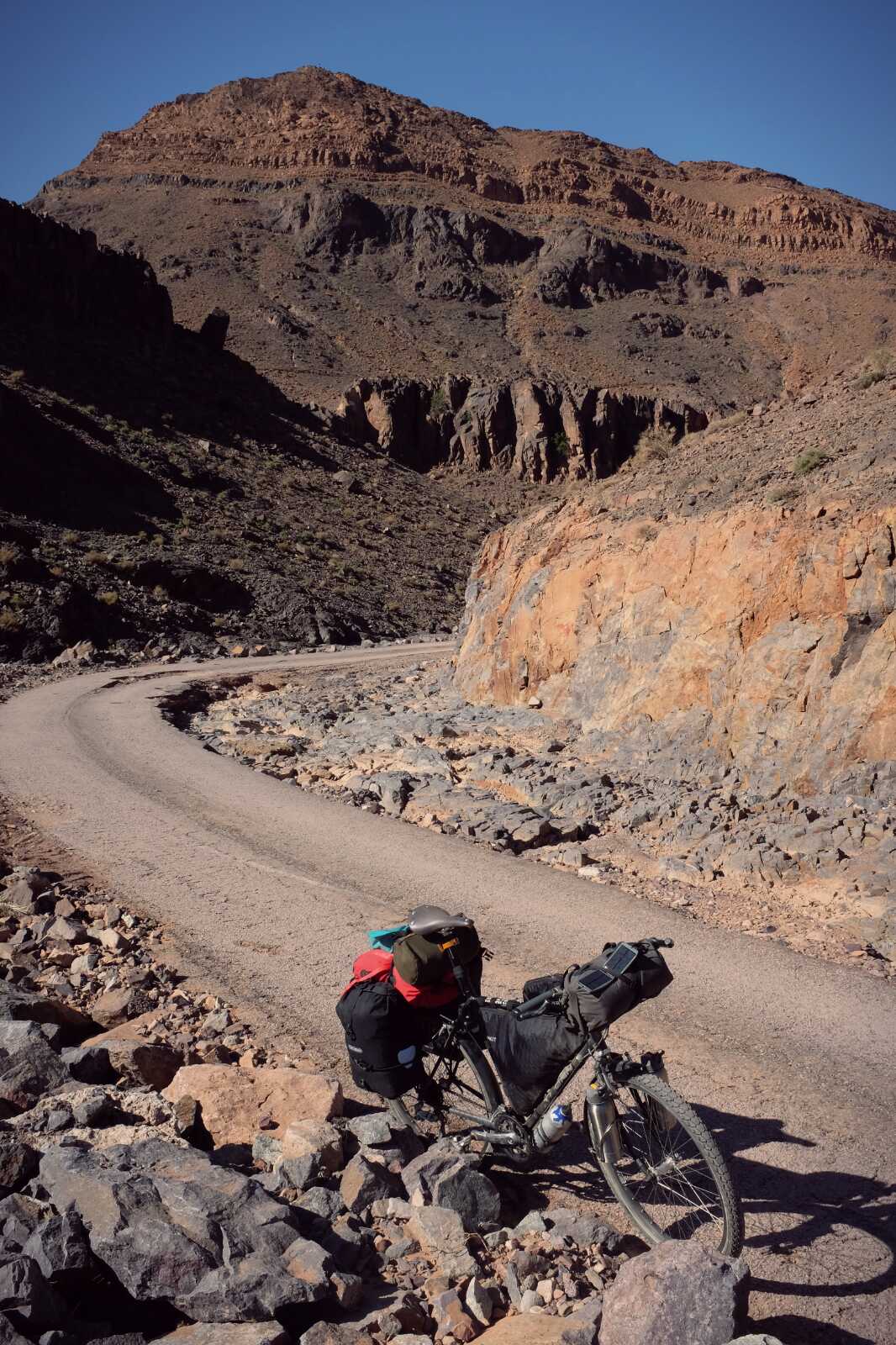 The road/track to Agdz, utterly brilliant… 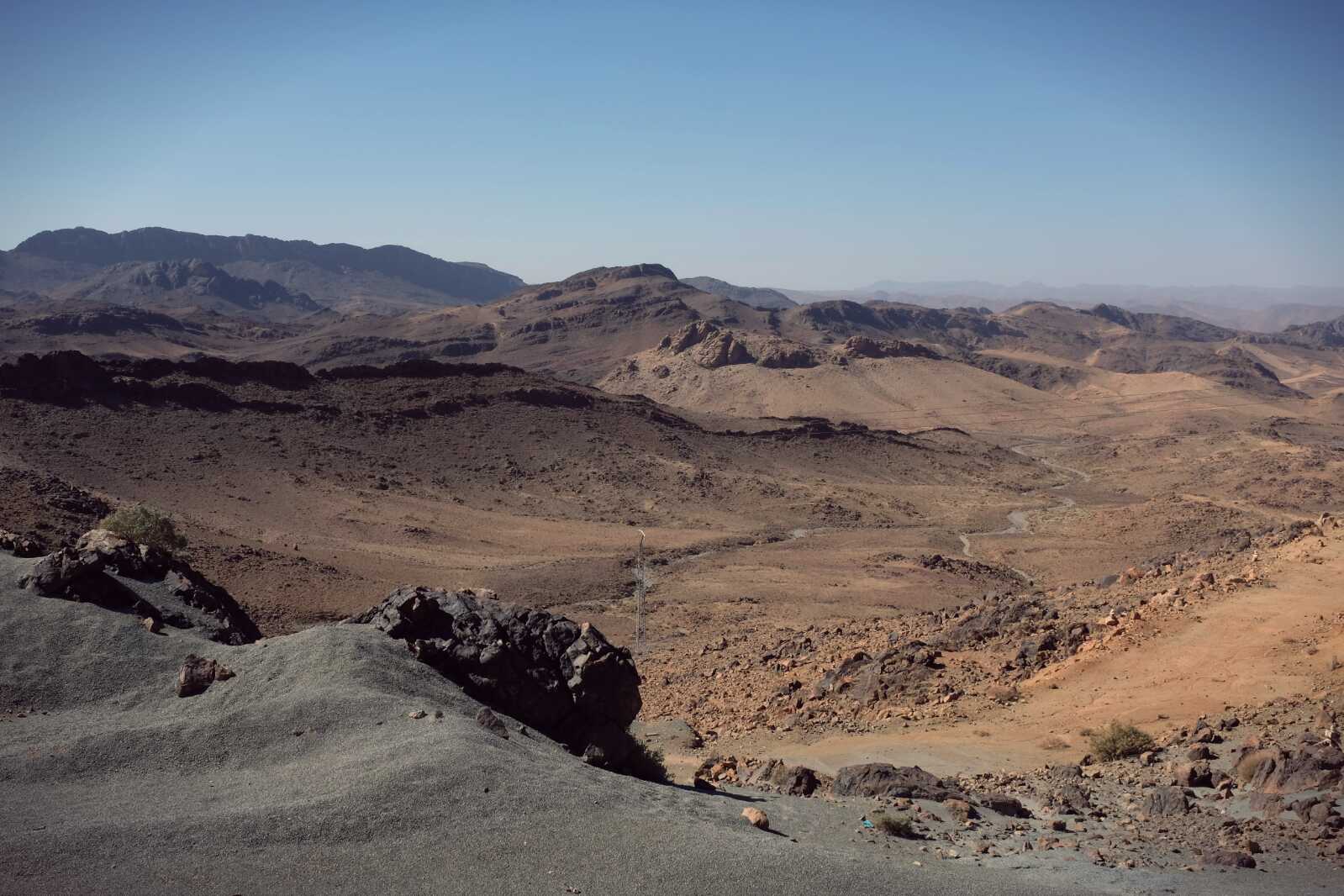 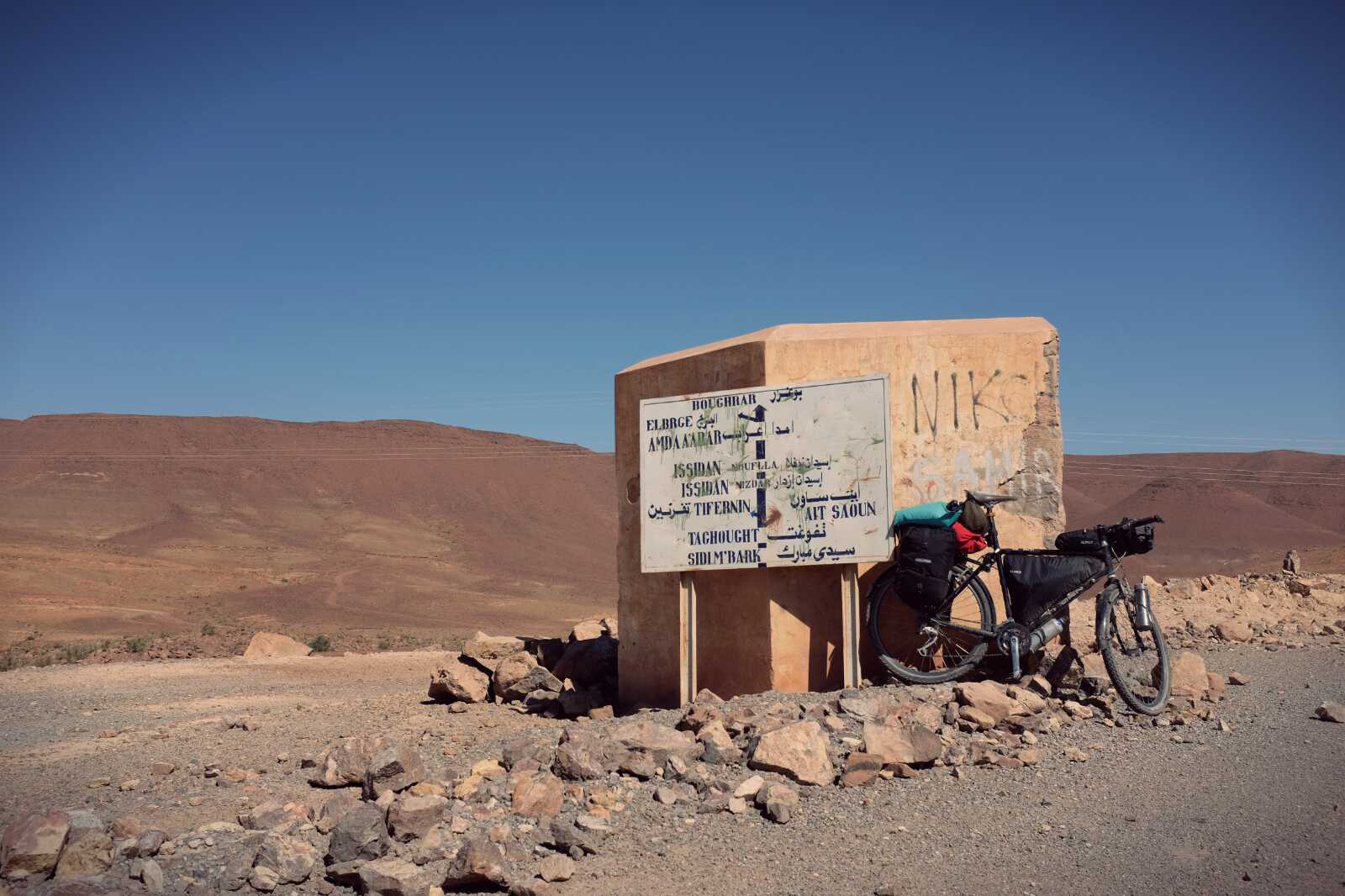 signpost to villages in the hills… isn’t a bicycle that can carry you to such places just a most brilliant thing :-) 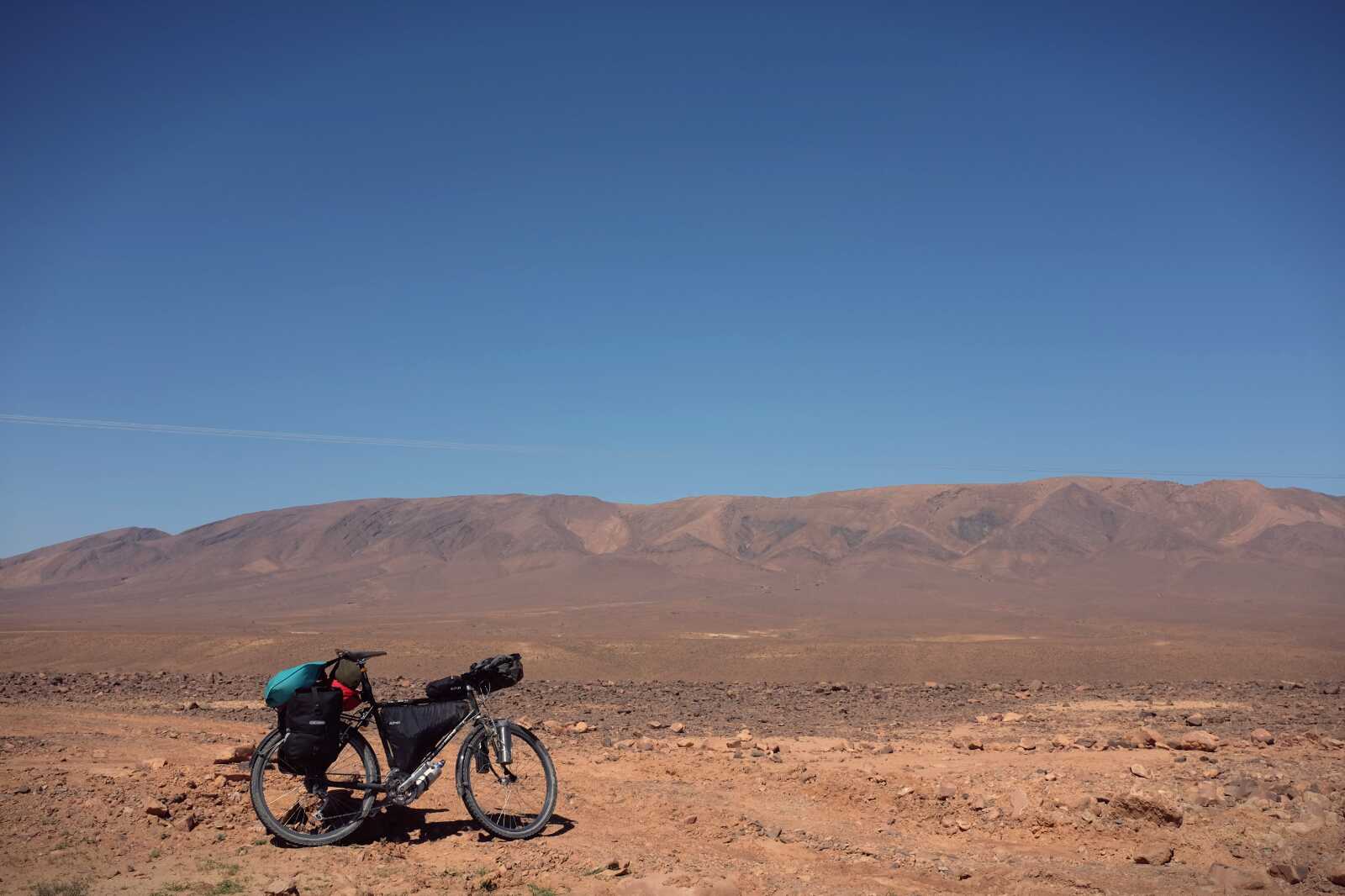 After 50km or so the road turns back to asphalt and begins the long, gentle descent from around 1500m to Agdz in the Draa Valley. The pleasantly cooling headwind become a hot one as I descended into the palmeries of the valley. It truly is an oven with 37C showing on my thermometer as I rolled into town at about 2pm, I had drunk nearly all of the 8 litres of water I started the day with. So.. 95km from Tazenakht and almost 500km from Marrakech (in a circuitous sense..) and with everything still shut down for the festival I am spending a couple of nights with my feet up in a rather beautiful old kasbah. Camping is possible in the palmerie but with a day off it is far too hot to siesta in a tent, and besides at still less than 20 quid a night for a lovely cool room in which to while away the afternoon  heat it is well worth it on such a short trip… I need the rest, feel like I’ve done quite a lot this past few days. From here it’s on to N’kob and into the mountains of the Jebel Sahro… on the map it looks…. difficult. I might treat myself to 3 nights here, it really is rather lovely :-)

12 thoughts on “A head full of couscous”