Got some late afternoon shade and a mug of tea here in Zaros so time for a quick blog post I think.. it’s been a terrific couple of days, albeit hard ones, crossing the Psiloritis mountains. Legs were really quite stuffed this morning so basing ourselves in the quiet little village of Zaros at the foot of the range on the south side it’s been a day of local exploration… quietly spinning along fragrant dirt roads, lolling by a crystal clear river in the sun.. that sort of thing. 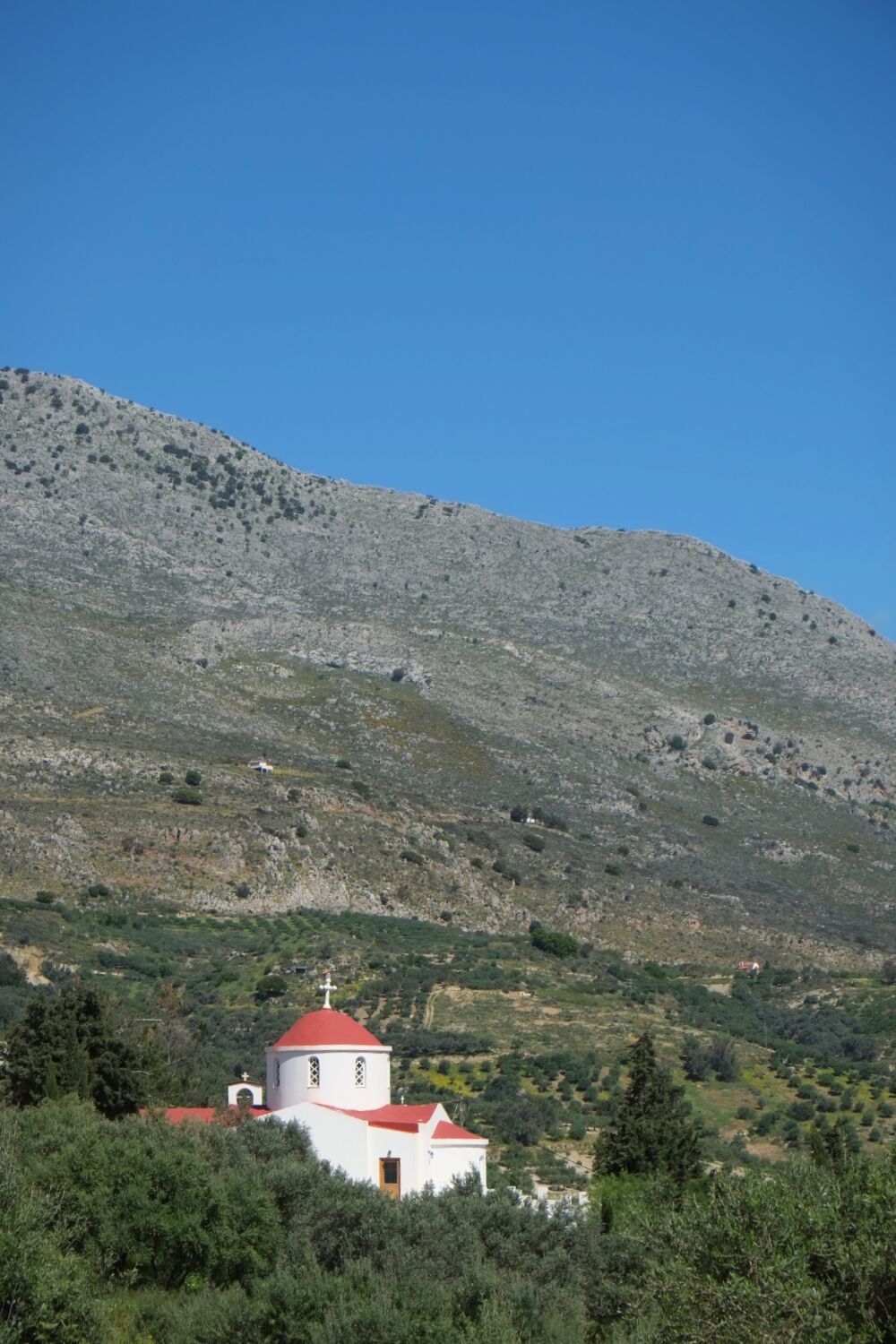 From Heraklion it’s an easy 15km spin south on a good road to the village of Krousonas…. 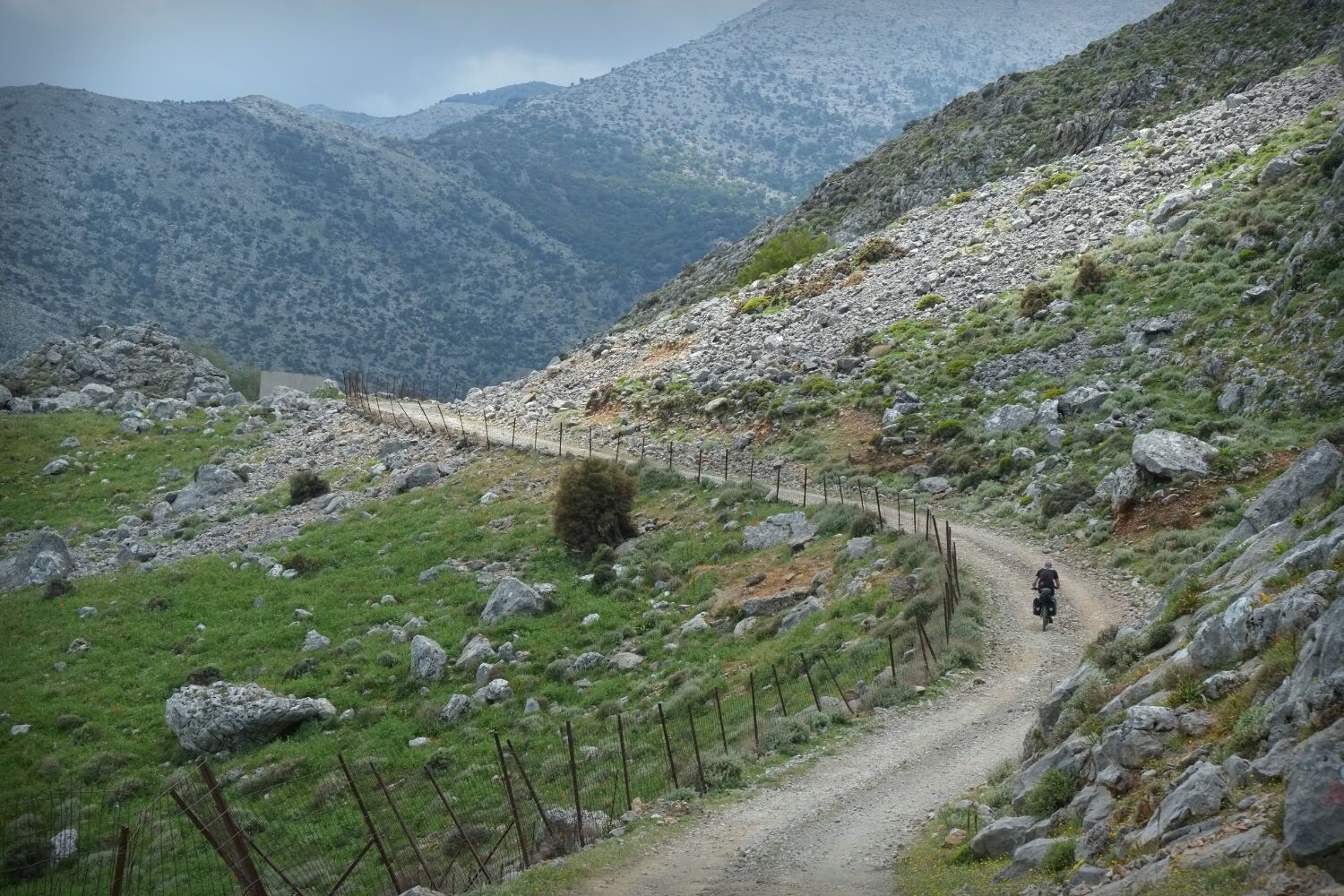 .. where the asphalt ends and the climbing proper begins… steeply … with grades up to around 30% on a rough stony track. 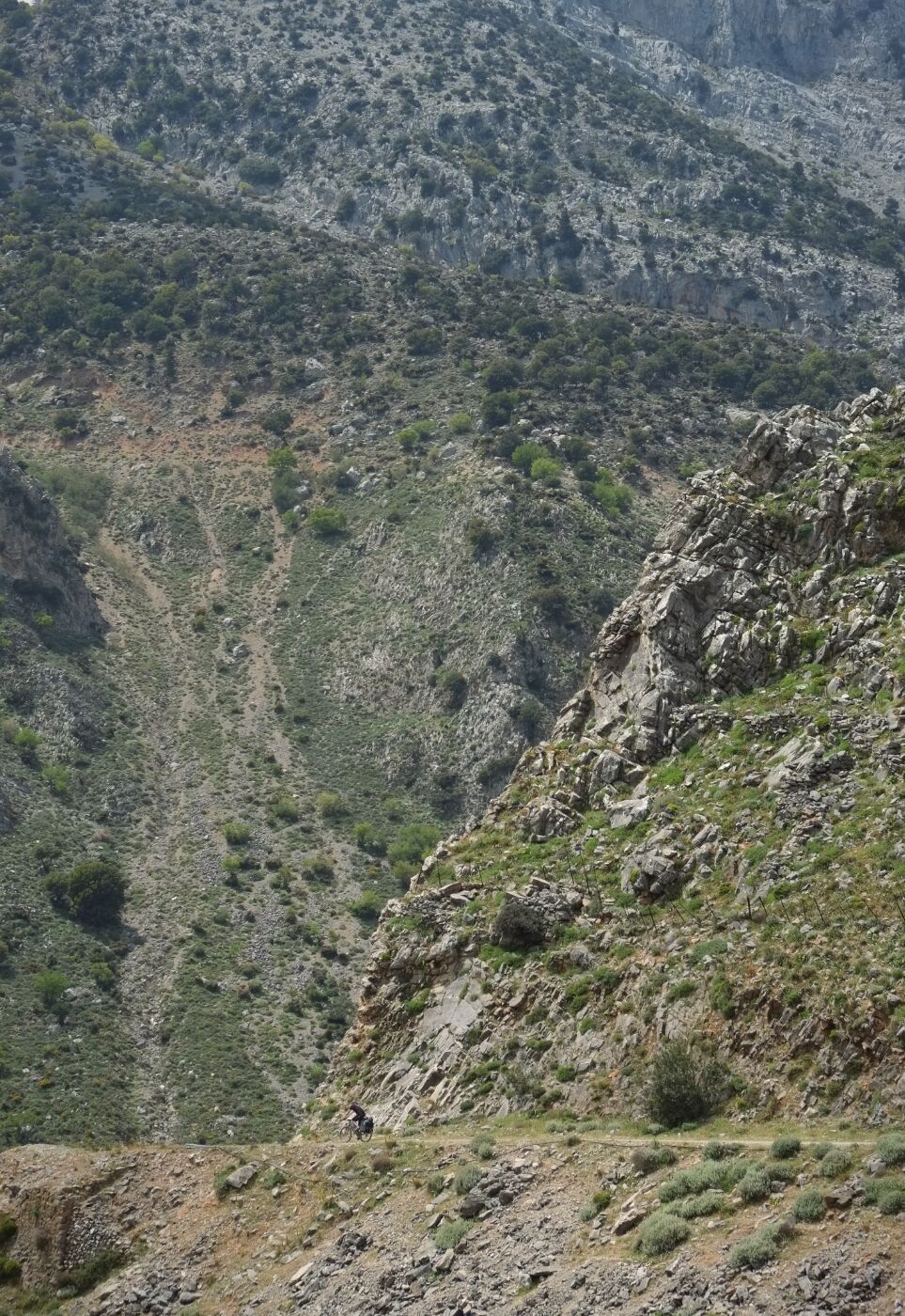 Properly good mountain scenery of the kind that dwarfs a cyclist. 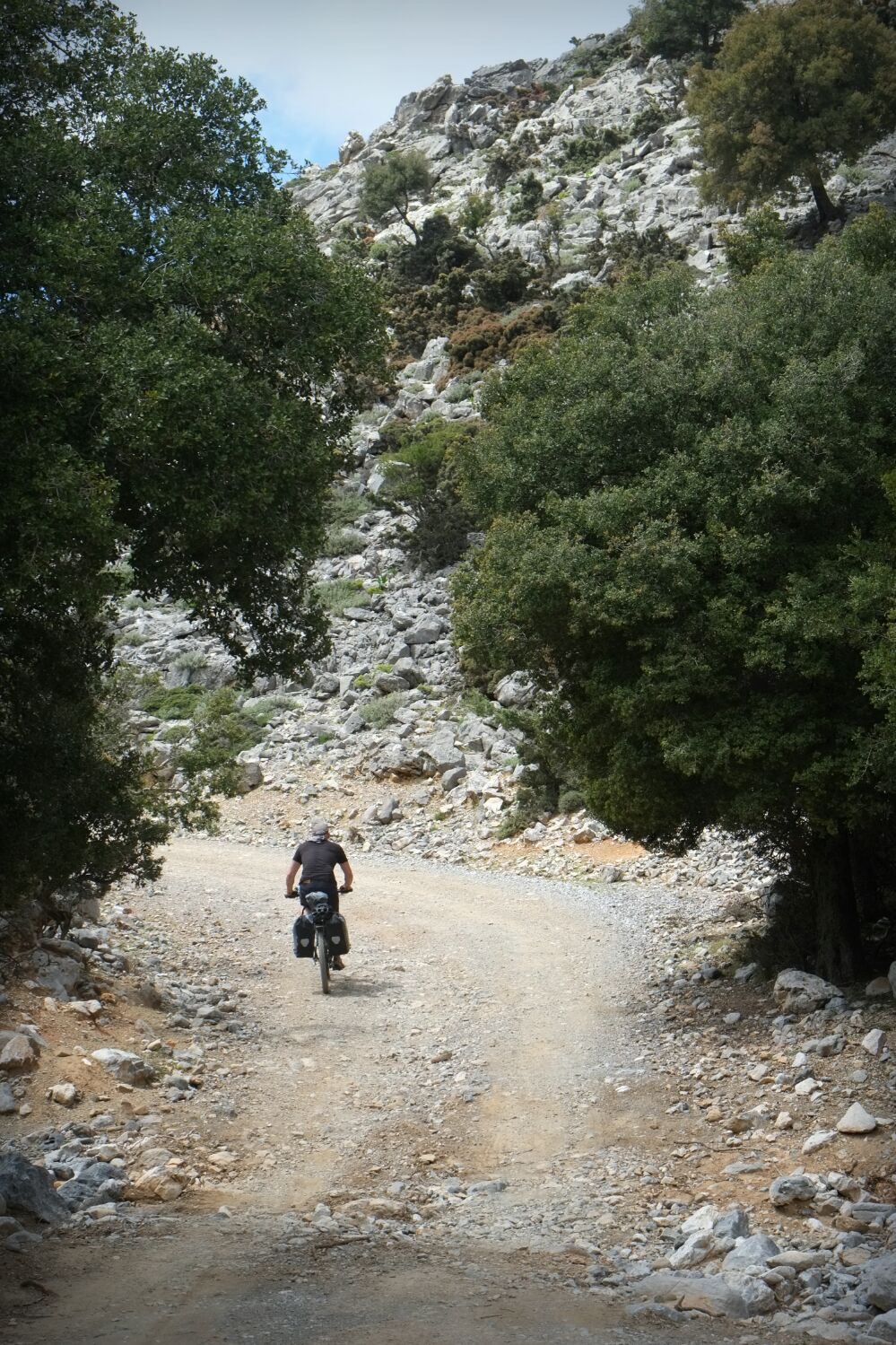 really satisfying riding but one has to be prepared to backtrack from time to time.. we’re using the Greek roads.gr 1:50,000 maps which are very good but even so the network of trails can be tricky to navigate and are not always true to the map.. all good fun. 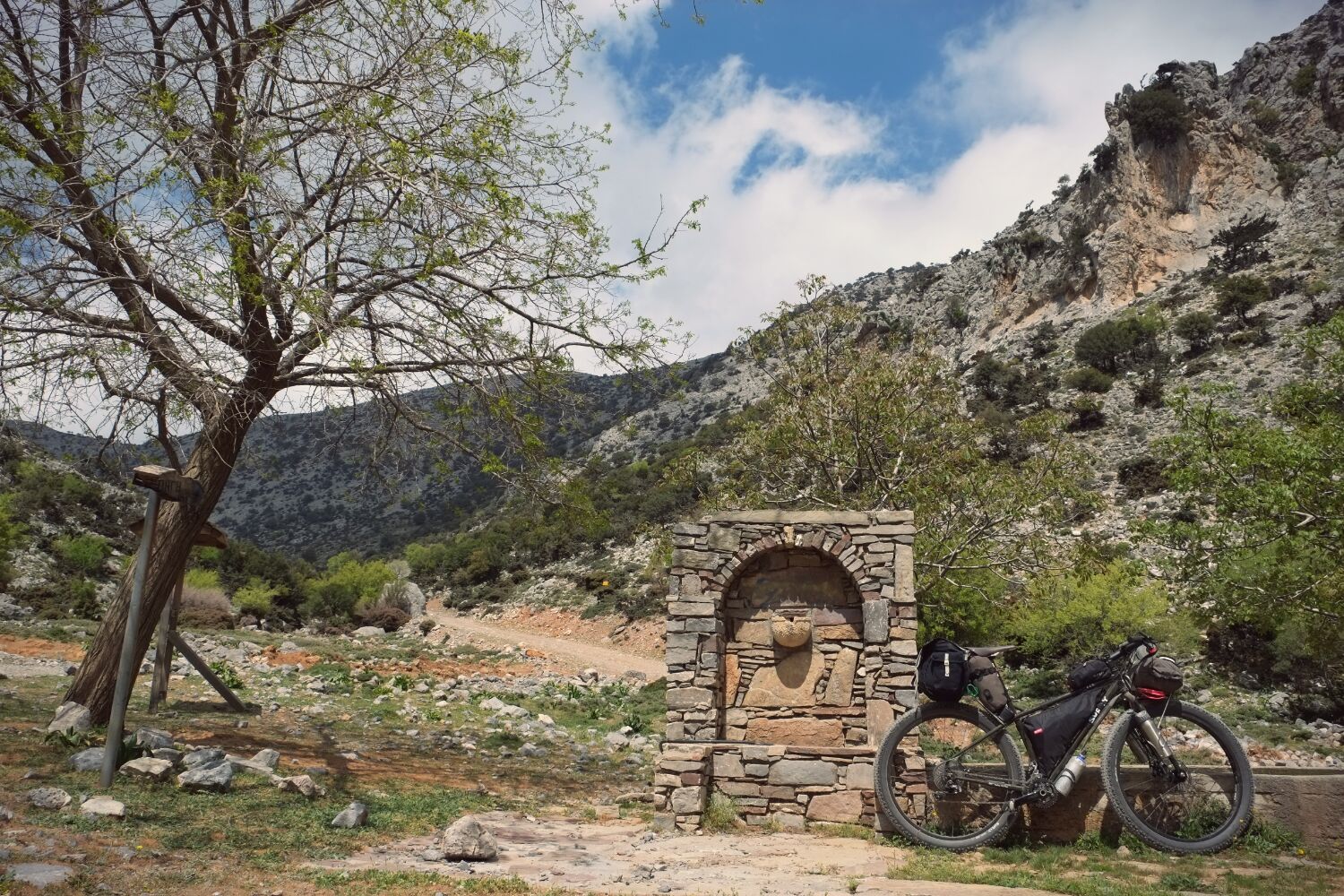 Handily water is not too much of an issue… there are cisterns dotted around the place for the sheep/goats… but do filter or purify the water and you’ll still want a couple of litres on your bike if you come this way. 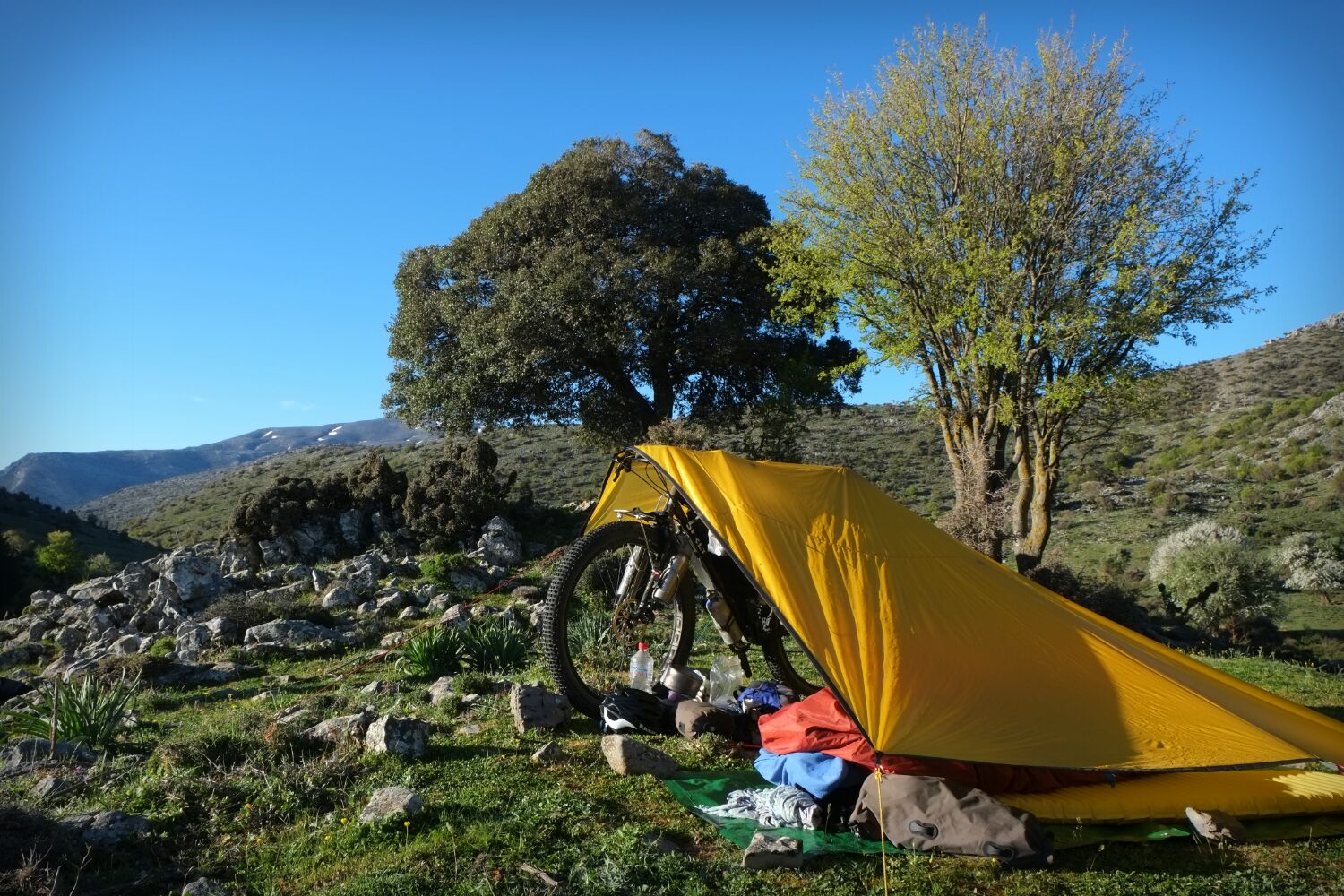 after a full day of climbing we found a terrific little spot for an overnight… sheltered from the wind and with a fine view of the mountains. Technically wild camping here is illegal and the law is enforced around the busier coastal areas… but in the mountains just be discreet, respectful of of the shepherds and leave no trace and you should be fine. The locals are a wonderfully friendly bunch. As an aside the Surly ECR, being so tall, makes a terrific overnight shelter with the addition of a tarp. 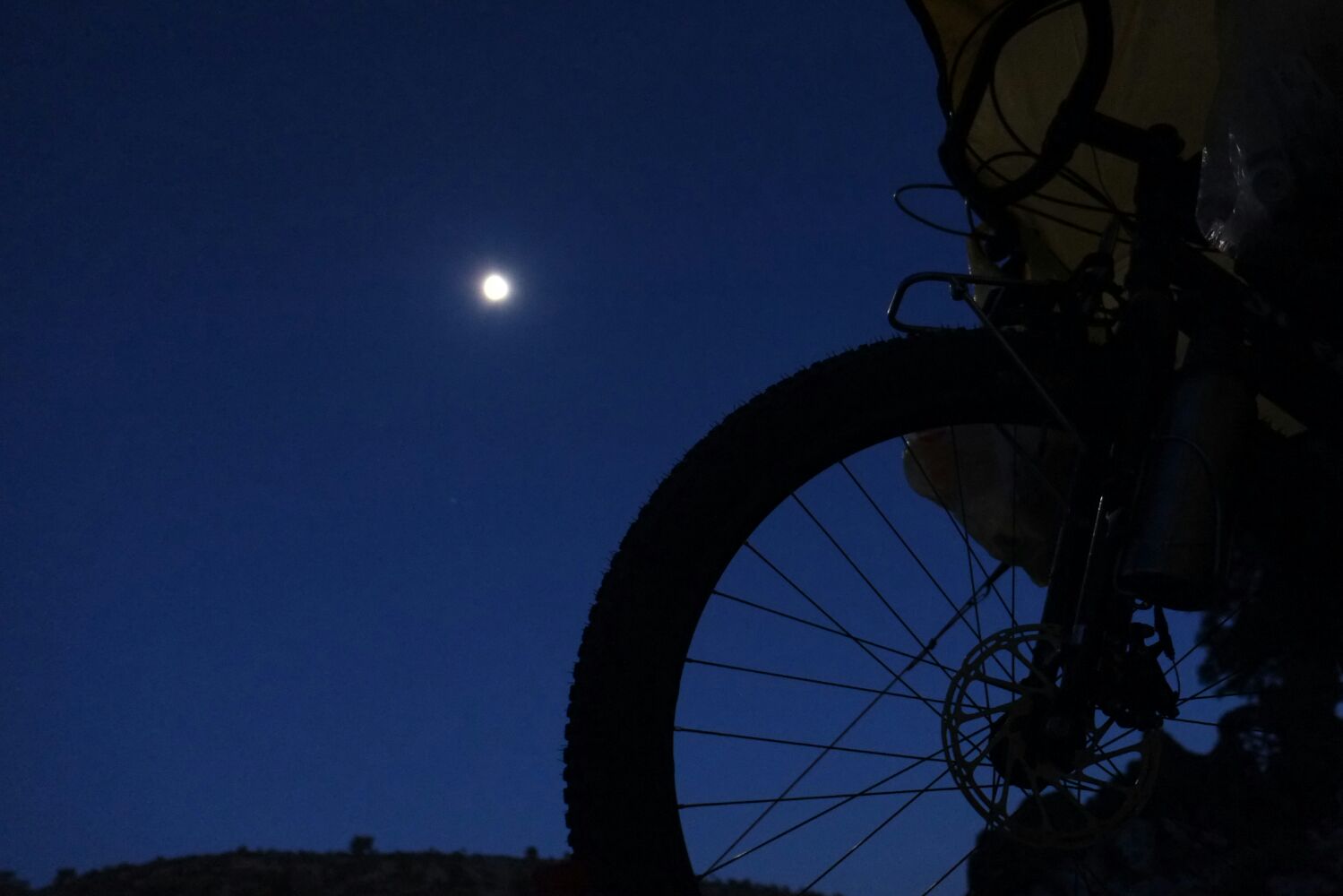 it was a stunning moonlit night, too beautiful for sleeping… it was also really bloody cold hence why I couldn’t be bothered to move from my sleeping bag for a quick snap…. 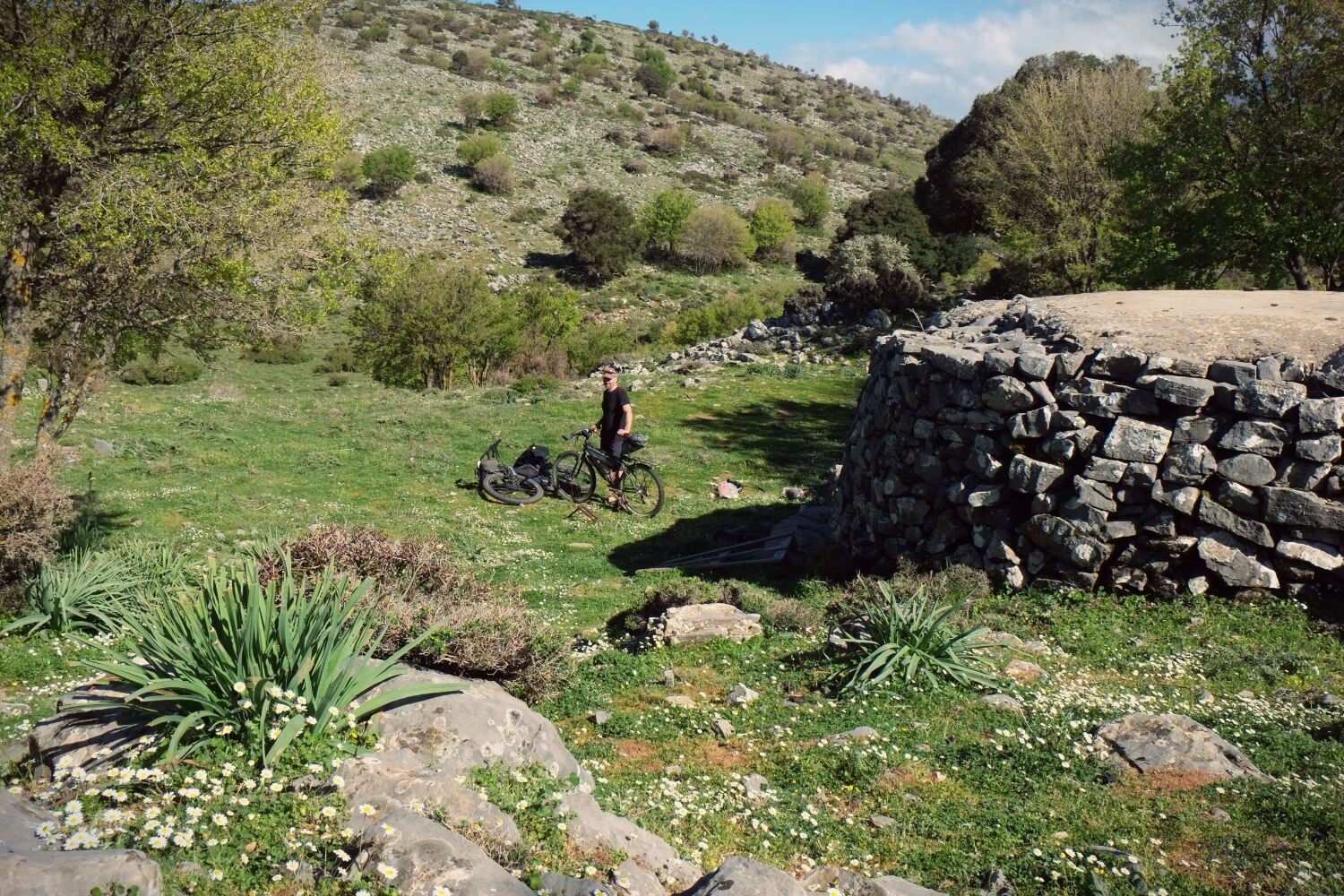 Another view of home for the night, a lovely patch of grass backed by a couple of old stone shepherds huts. It had a soundtrack too… endless bird song backed by the gentle music of the bells on the goats in the hills around. Ace. 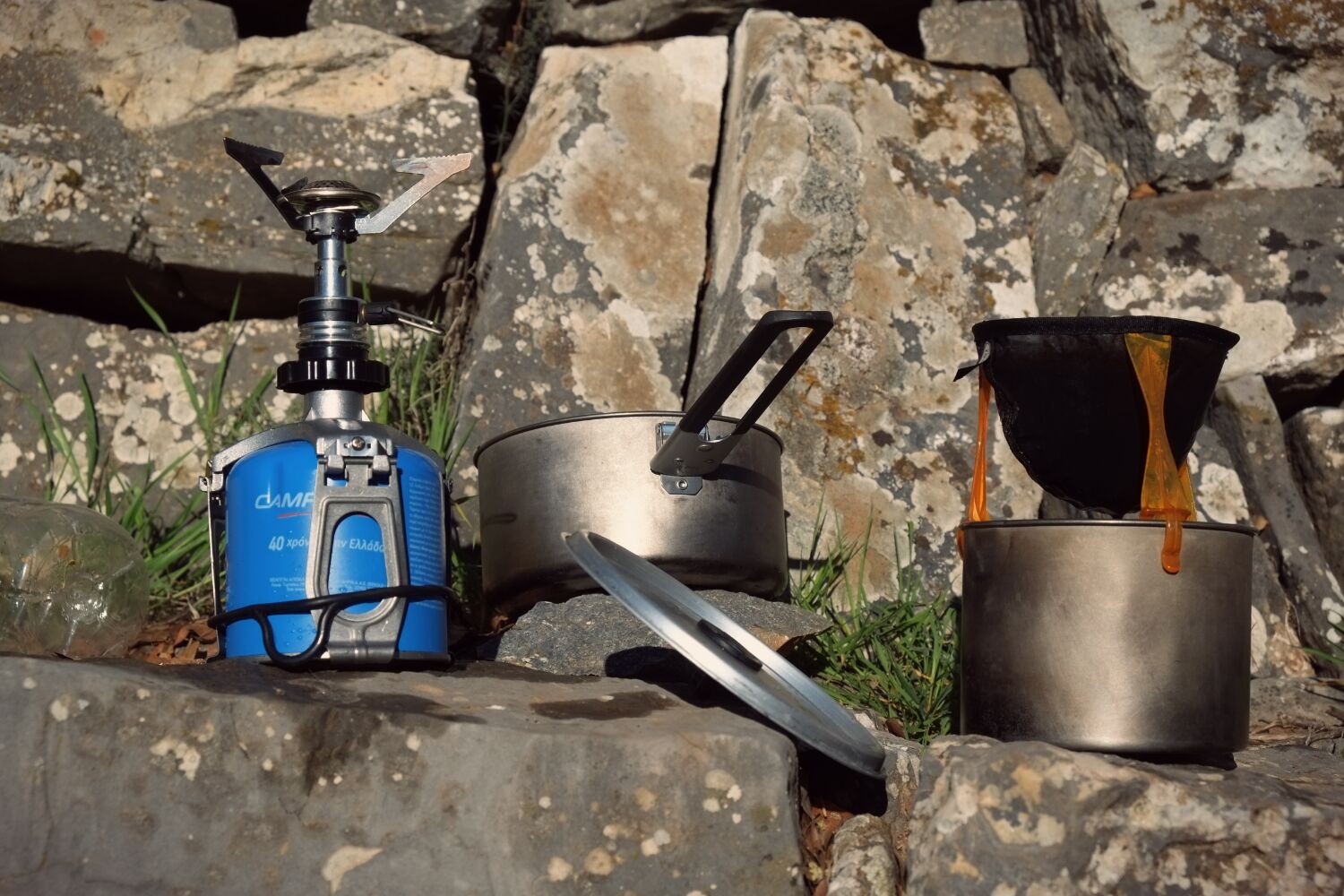 Camp kitchen. as there are two of us I didn’t bother with my little wood burner.. instead a tiny gas stove. Screw type canisters don’t exist in Crete however the puncture type canisters are available all over the place in supermarkets and corner shops. Edelrid make an adapter. 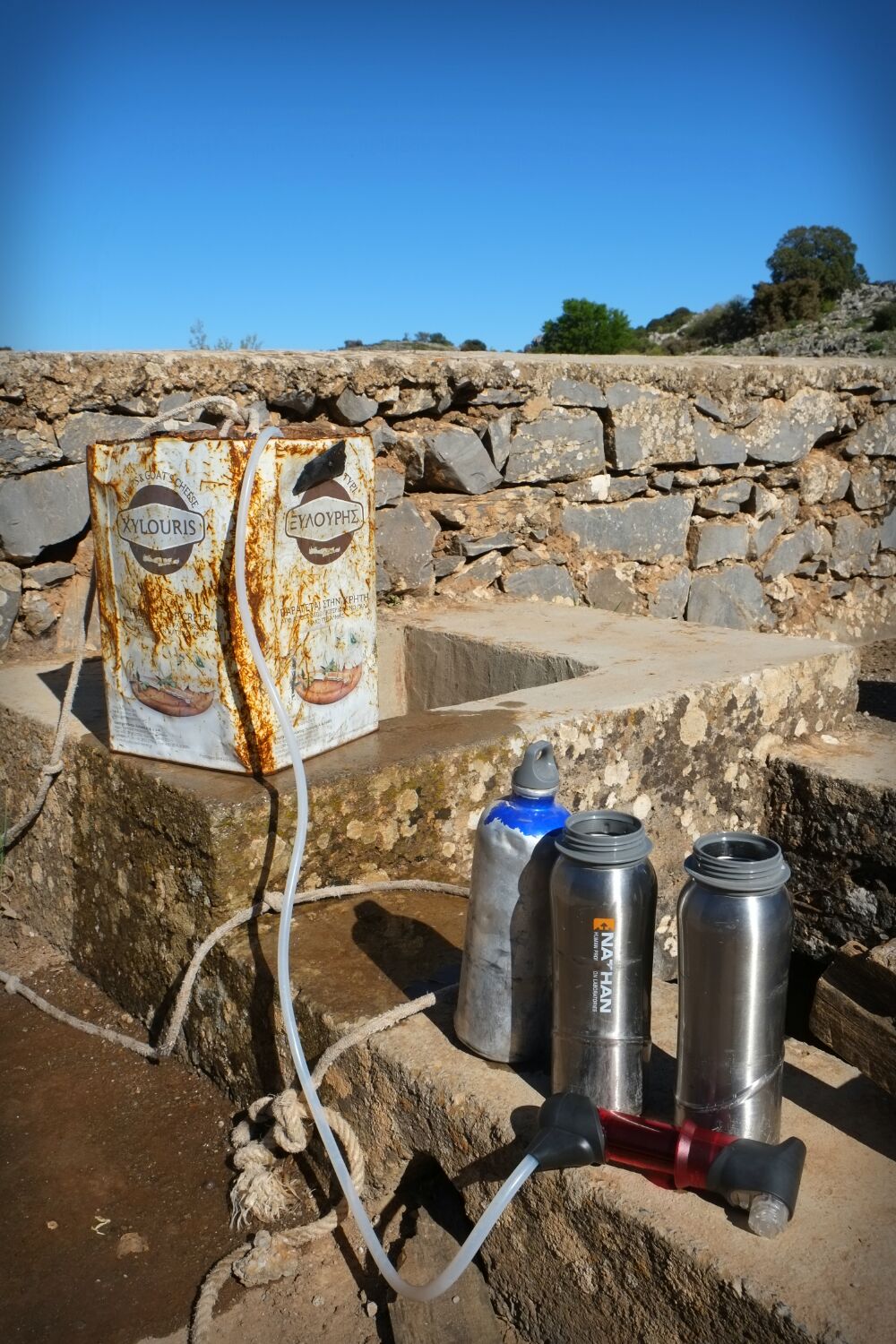 Stocking up with water for another stiff day of climbing… the can is used to pull water from the cistern to fill the livestock troughs adjacent to the cistern. 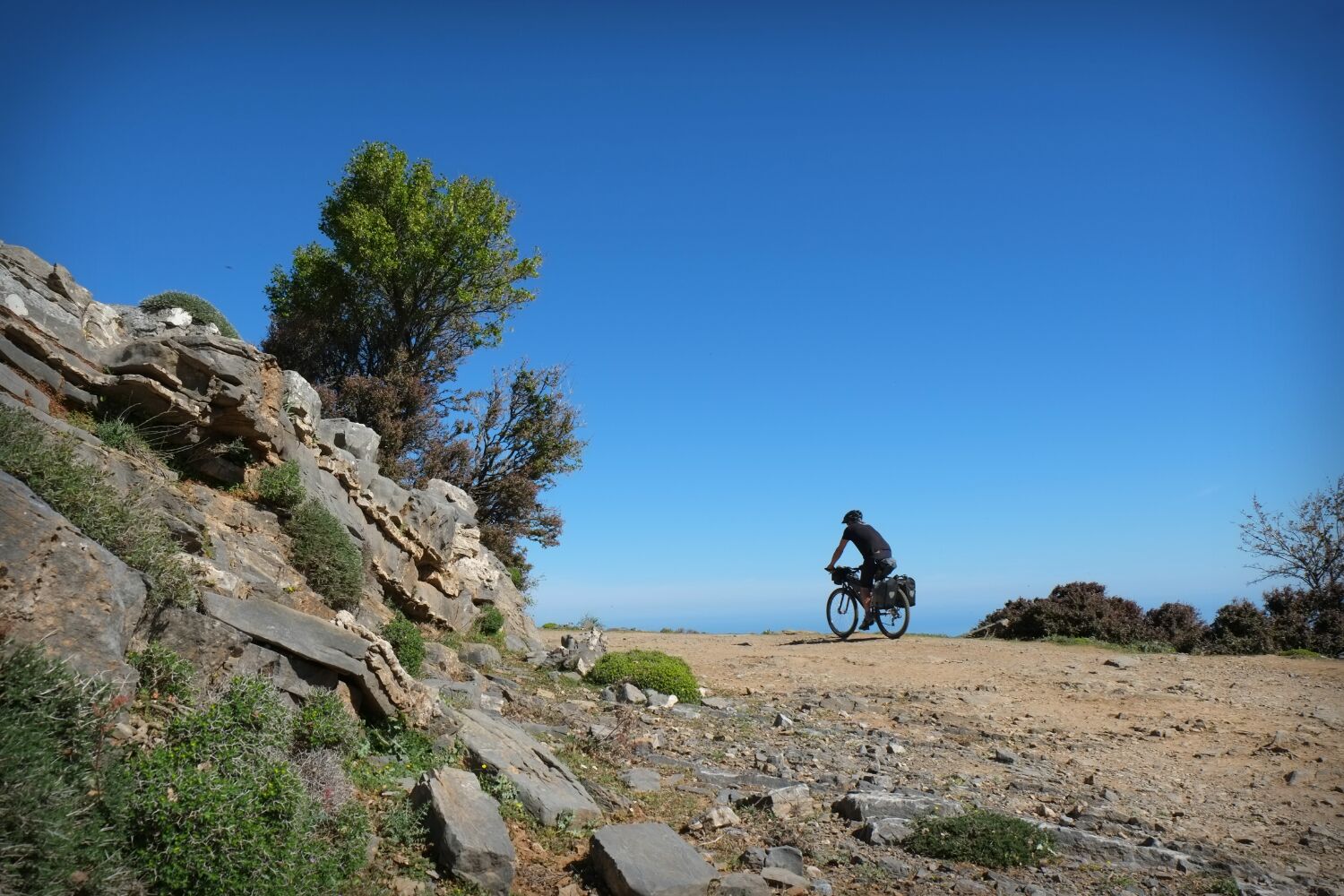 Some booming great views on the second day of the traverse as the track continued to climb, again steeply at times, to the pass at 5300ft.. Im enjoying having a riding buddy to give some context to photos for a change. Ash (Hayle Cycles) is riding a lovely vintage Kona cross country bike.. 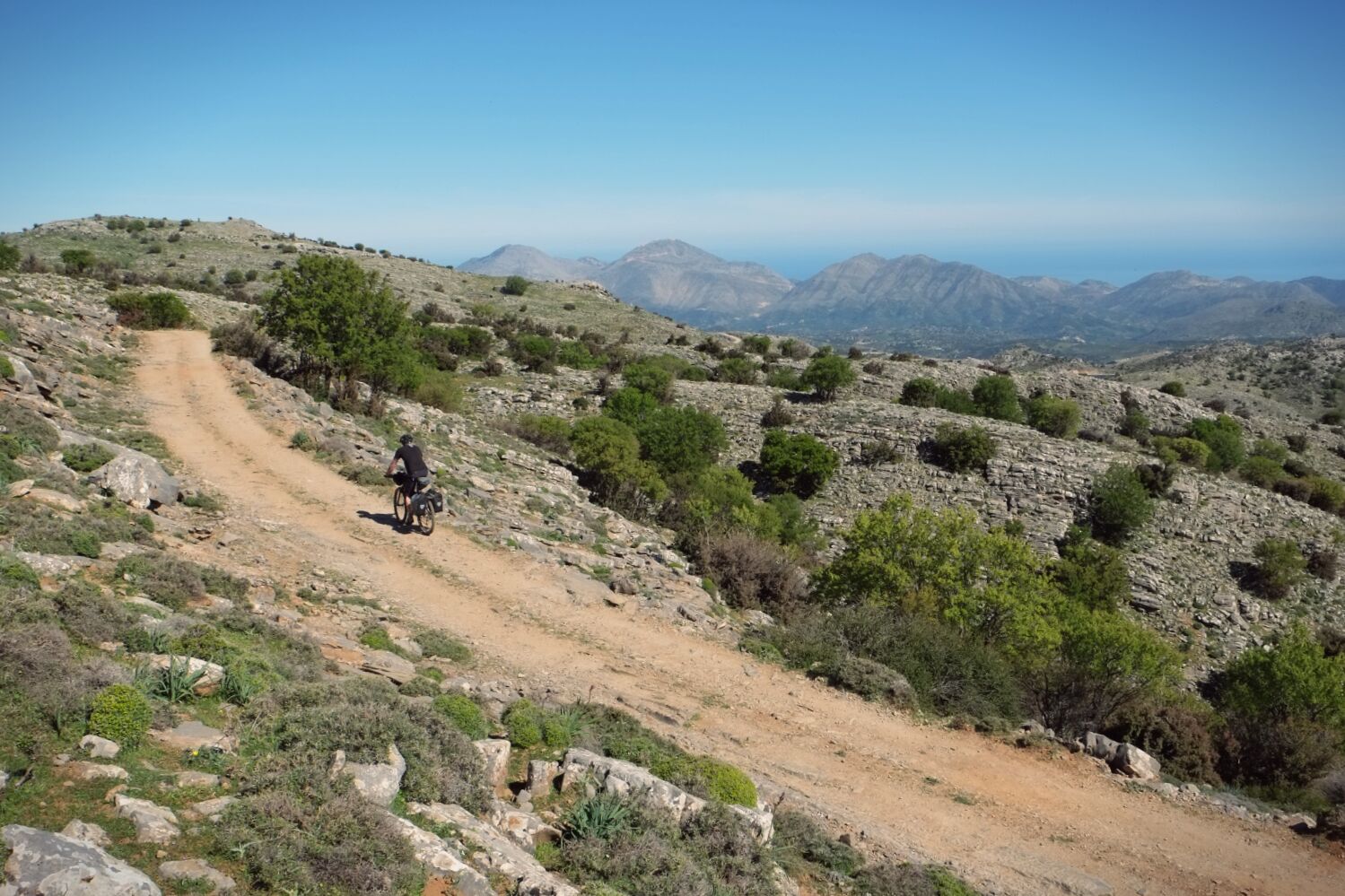 The north coast of the island in the distance.. 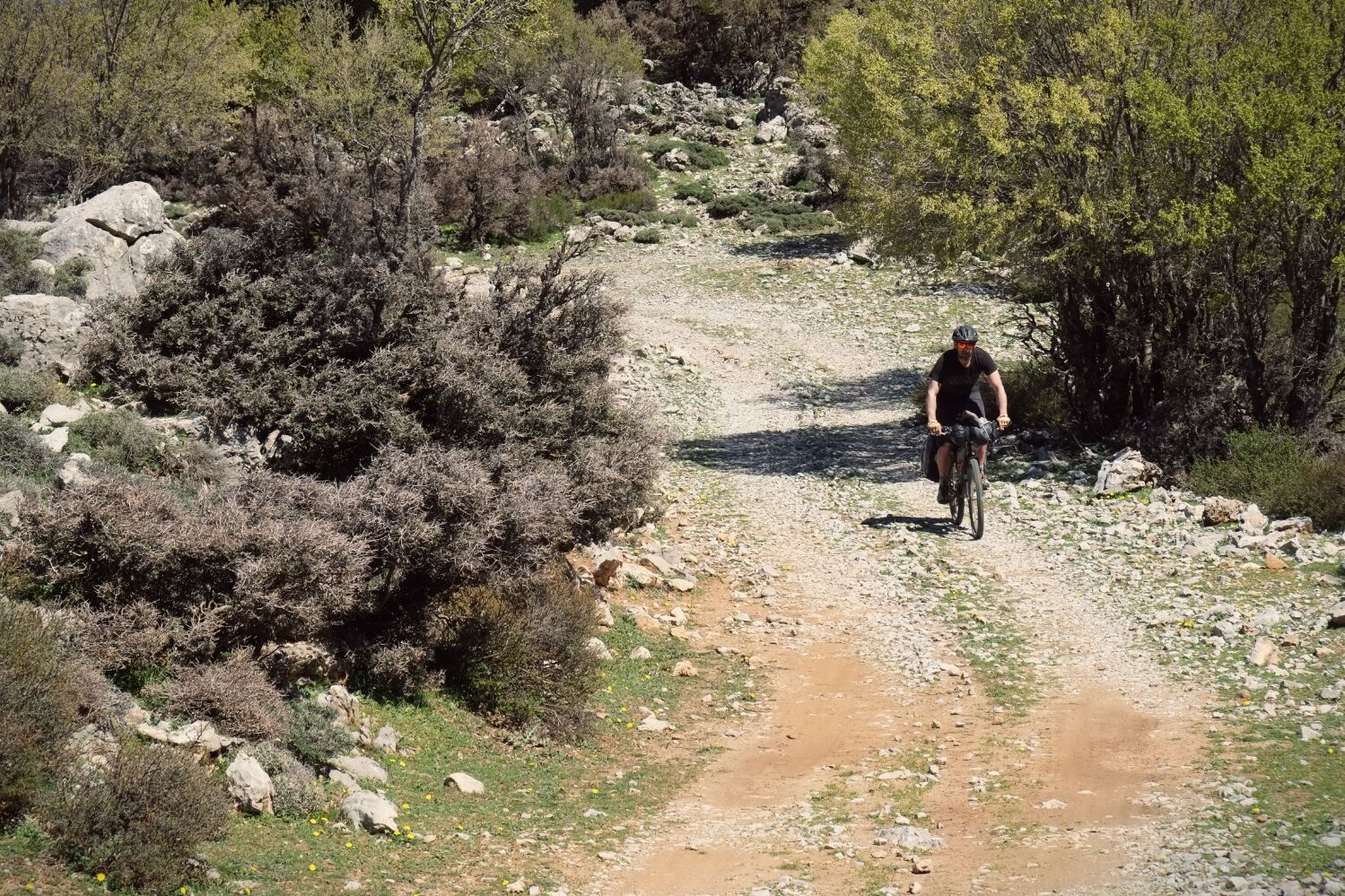 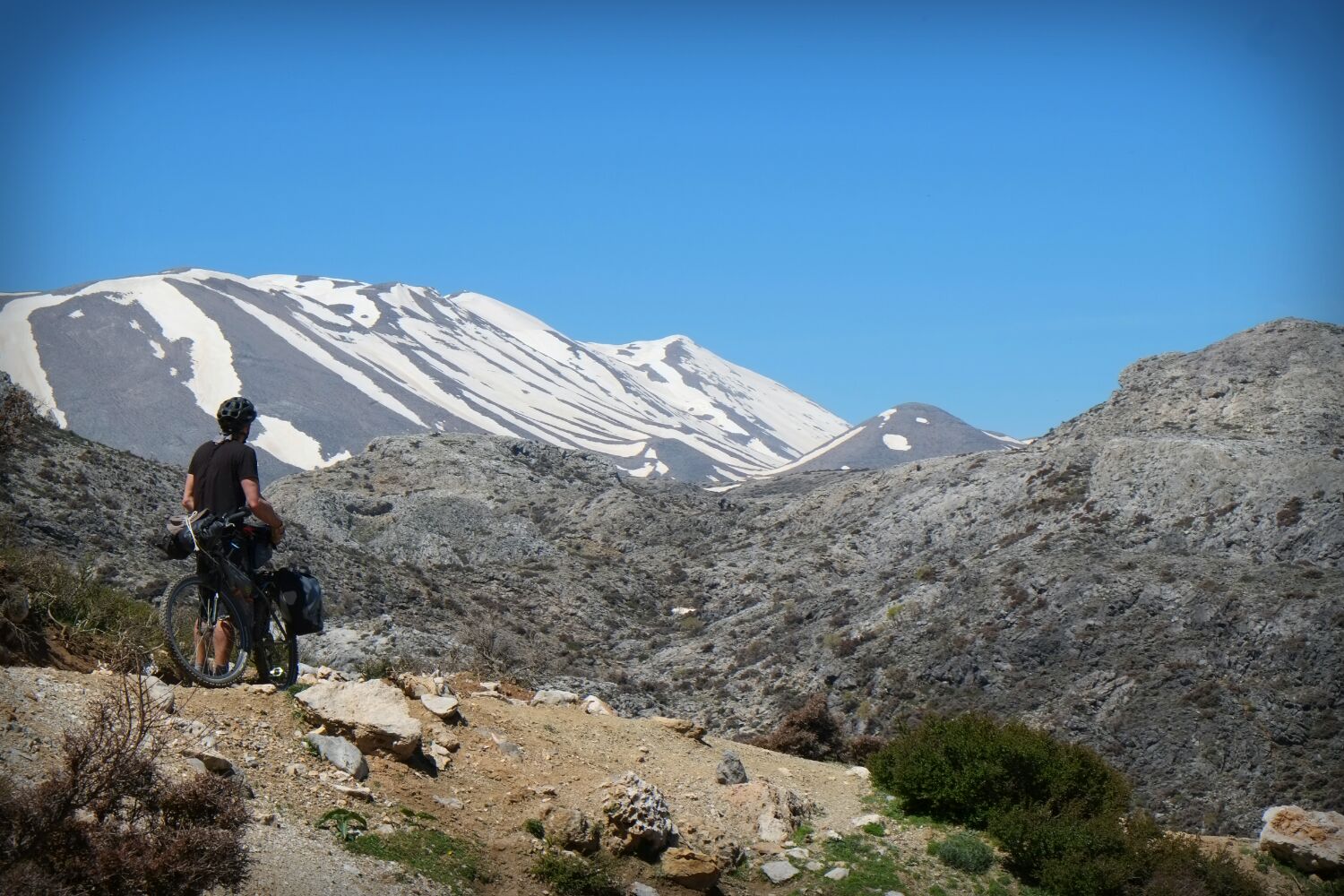 .. but after some very steep climbing and exploring a number of possibilities all the tracks turned out to be dead ends.. the views were fab however. 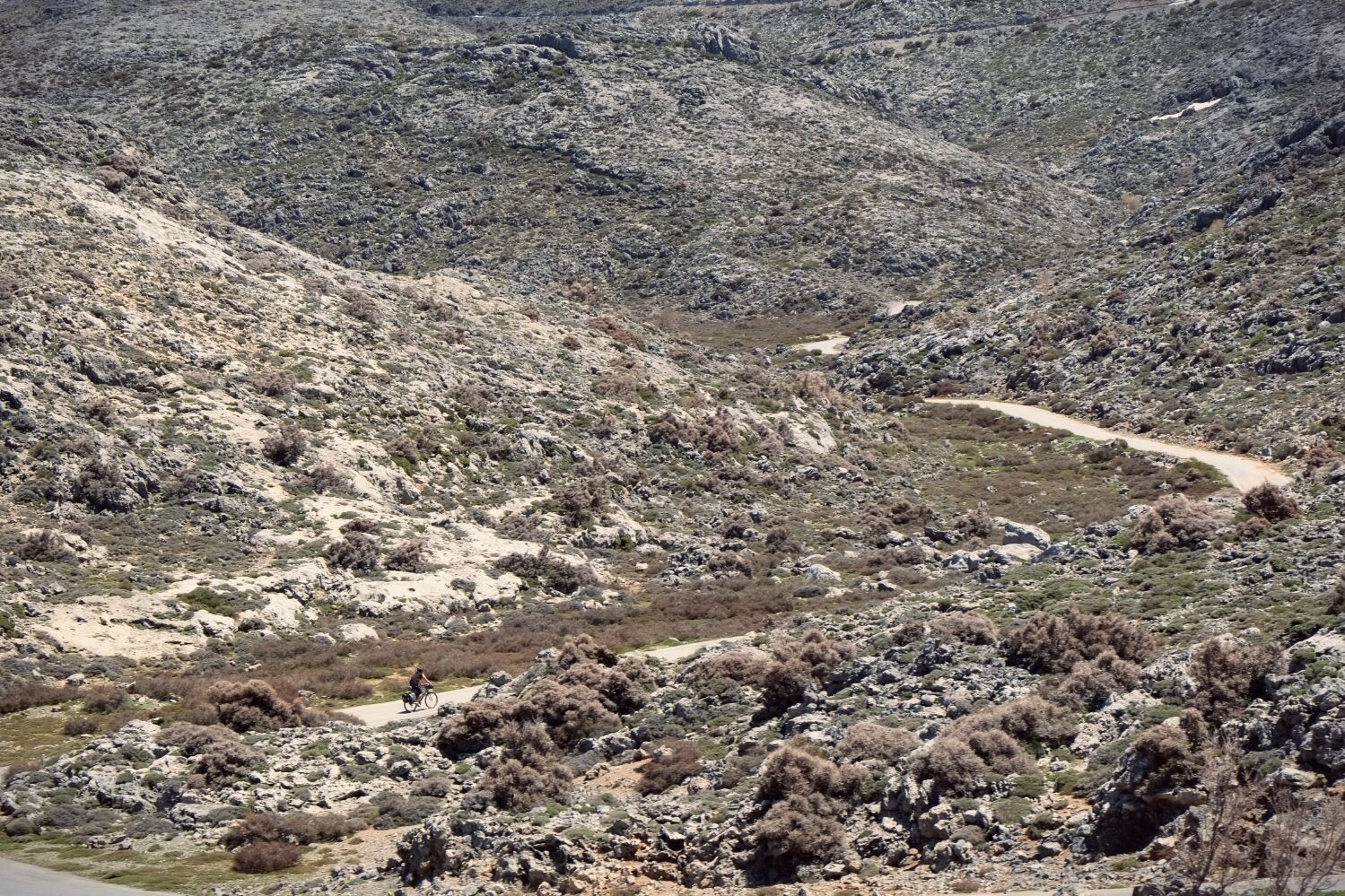 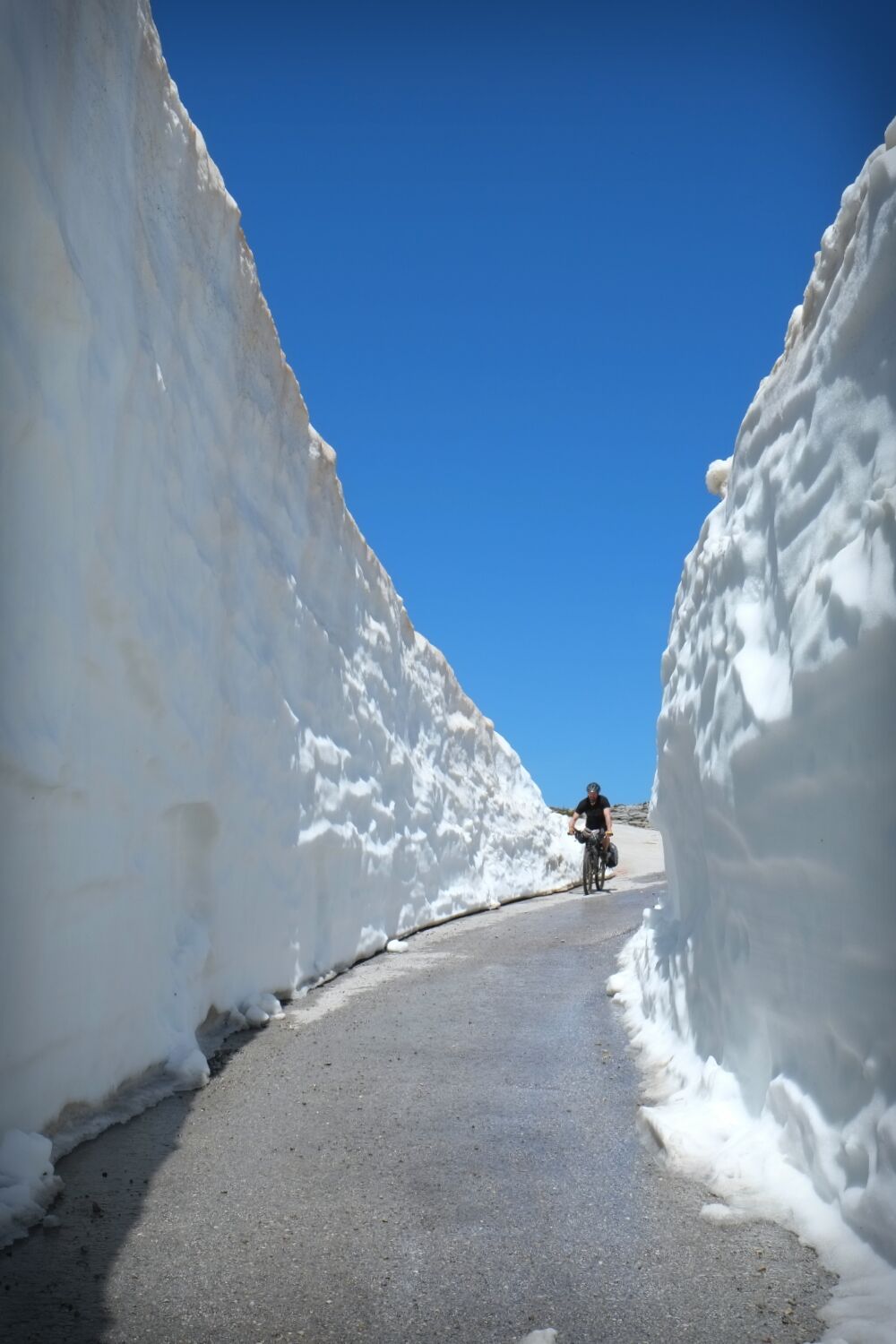 but it was not all bad… this happened. Chilly up there! 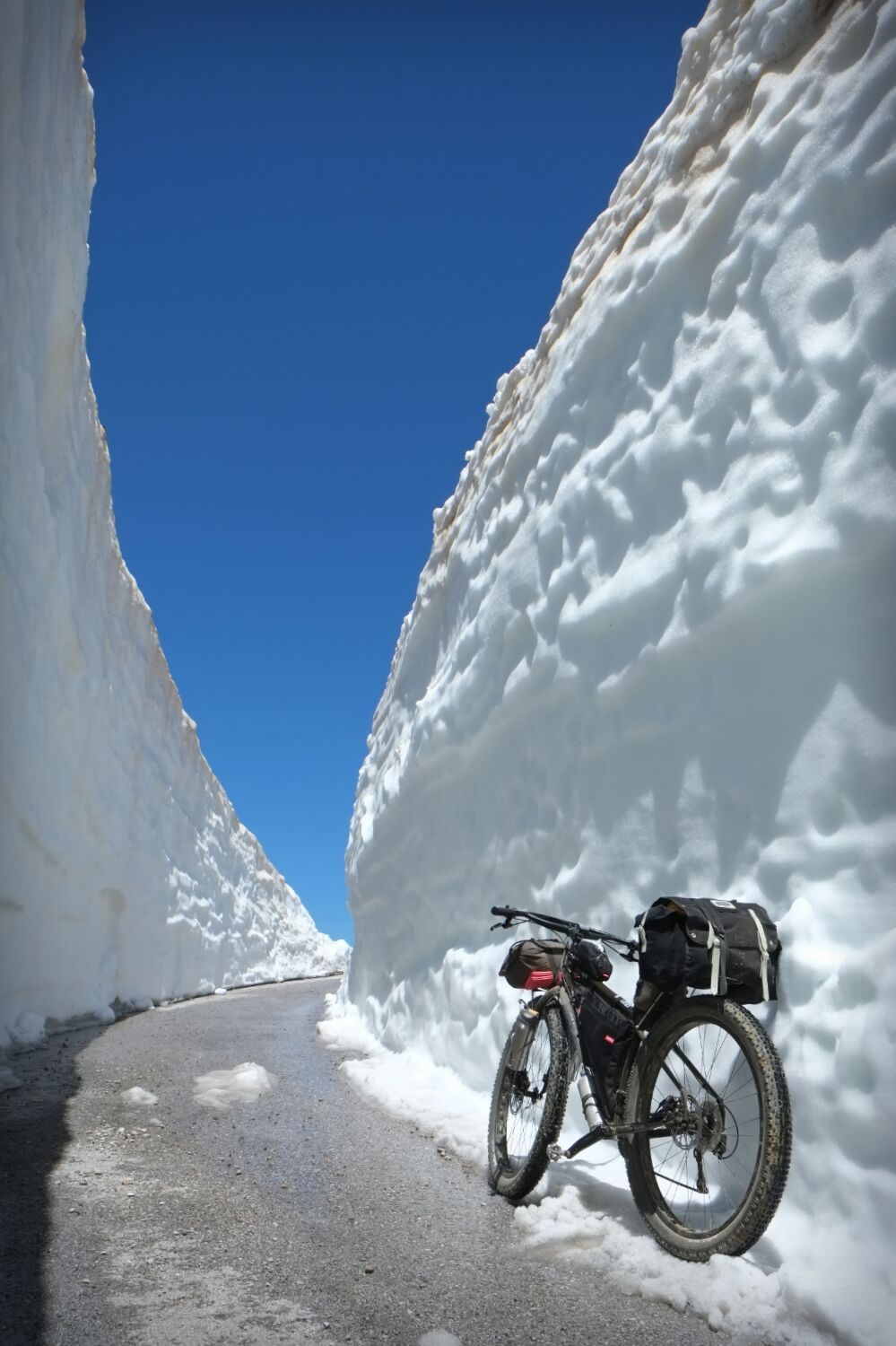 another picture.. just because.. 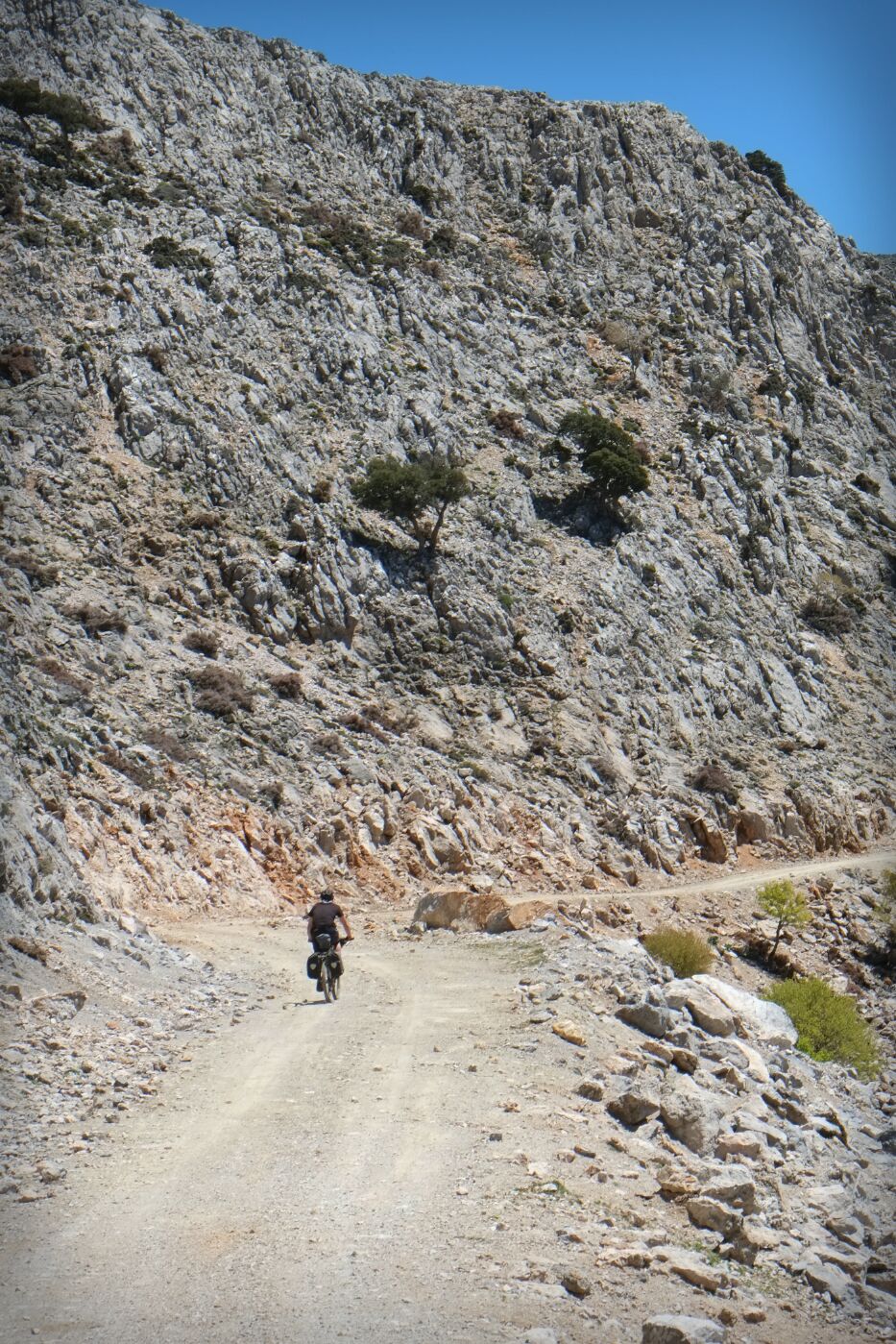 We were very quickly back on dirt however for a long, fast descent along the southern flanks of the range.. 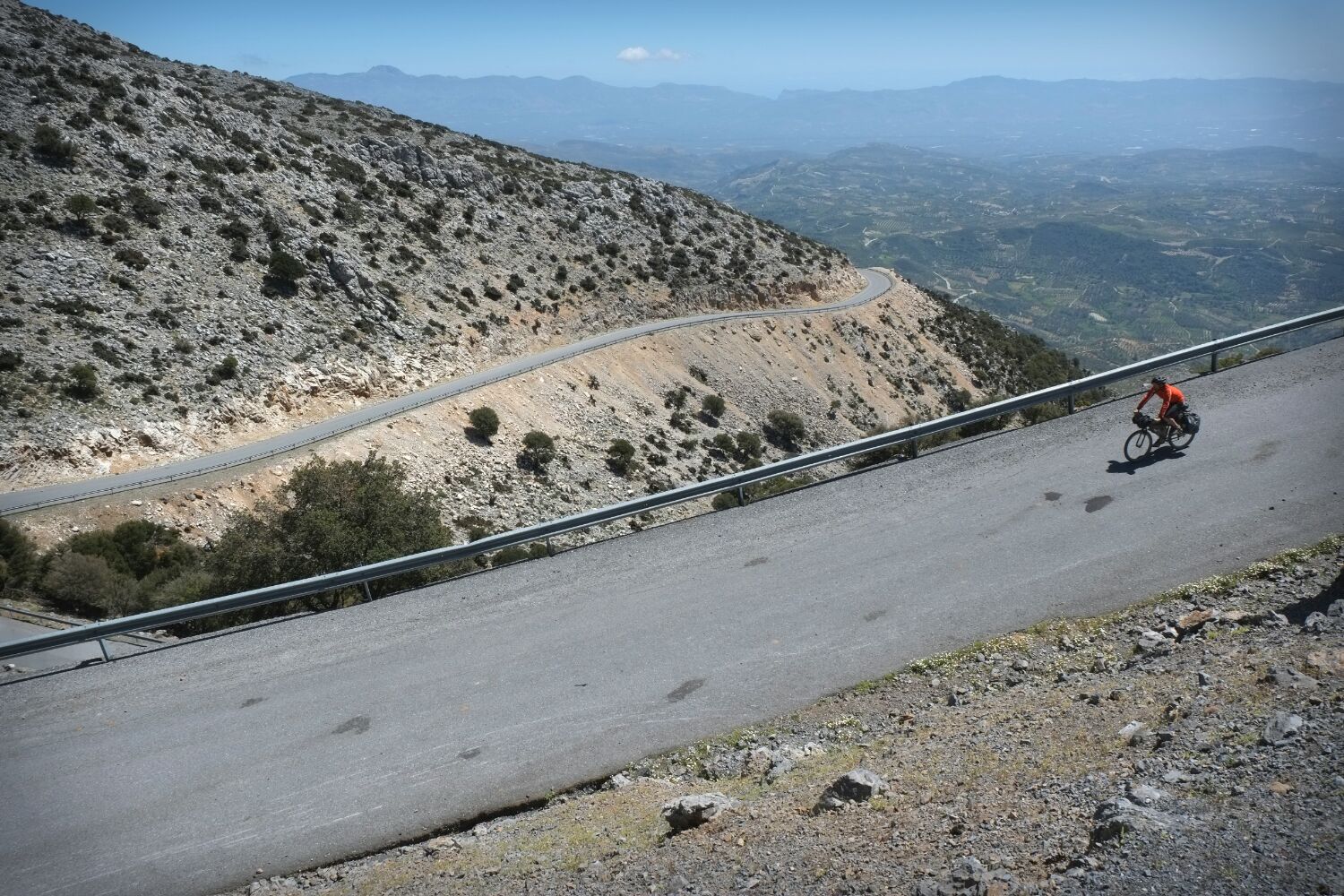 ..then a short section on a wickedly hairpinned stretch of asphalt… 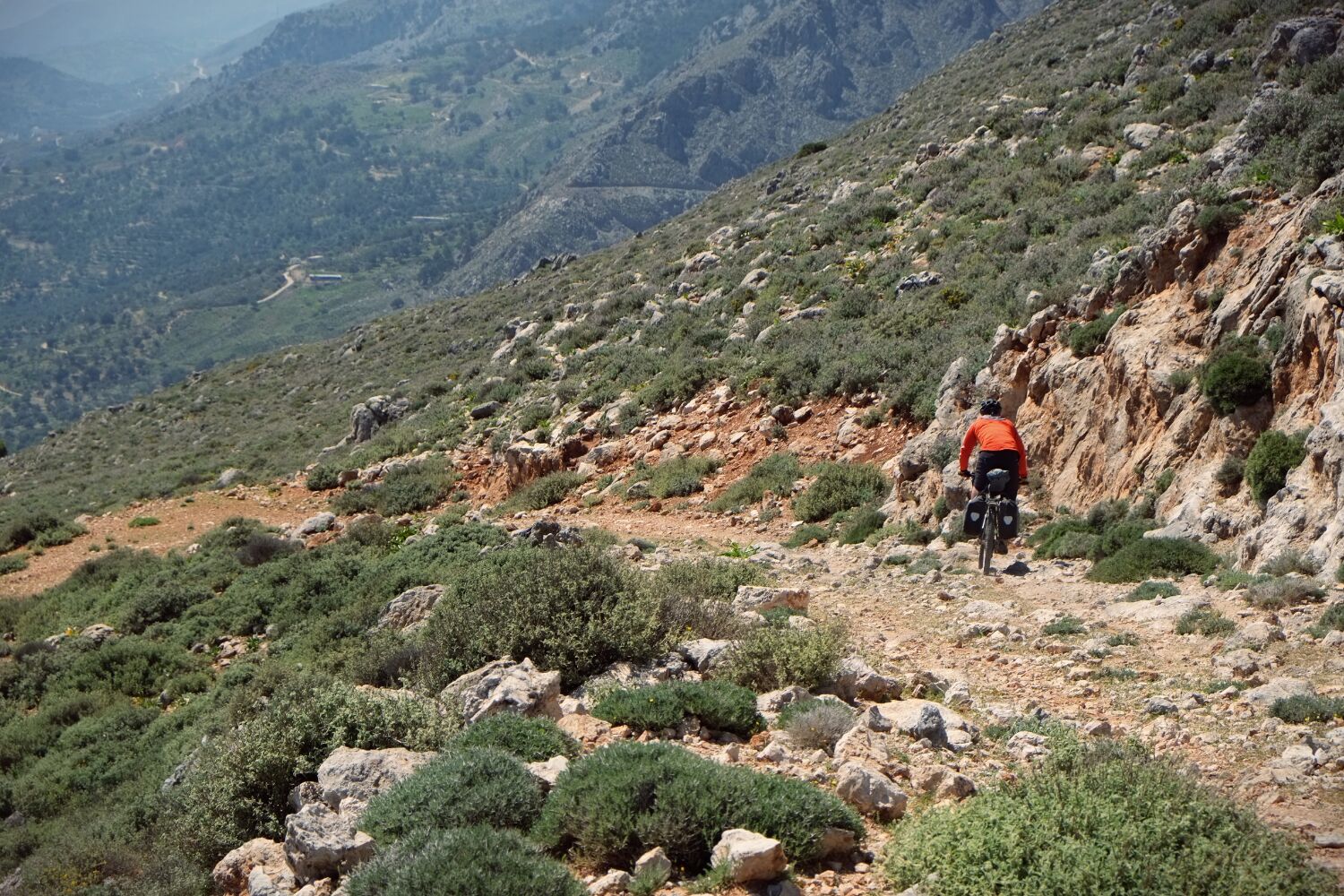 .. before finding a fun rocky trail that traversed the mountainside for a couple of km before a final plummet to the village of Zaros below.

On arrival in Zaros it turned out the village was full.. Mayday bank holiday weekend combined with some other goings on… as always however the local folk came to our rescue and a room was found in a brand new house extension with some great plumbing… hot, powerful shower :-)

From here I think we shall traverse west around the massif for a couple of days, making the route up as we go based on what looks interesting, before dropping down to the south coast for a bit…