hey look at this… OK it´s not really a banana, it´s a plantain but flippin´heck if it was a banana it would be a cyclists wet dream, in my case that is from an eating point of view but depending on what you’re like you may have other things in mind… i won´t go there. Big isn´t it…… 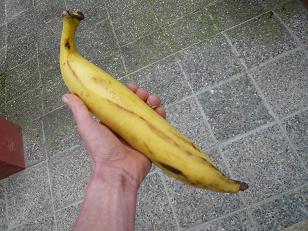 OK, other stuff… i’m still feeling thoroughly wasted today. Yesterday I was running on adrenalin, today I just have the combination of jetlag, fatigue and altitude (Quito is at almost 10,000ft) to deal with… i really can’t face riding a bike just yet so have decided to stick around for an extra day… it’s a bummer because the quiet Sunday traffic would have been nice for riding out of town, emotionally i just want to get going too…. Quito really is just another big city with a lot of tourists so not particularly friendly to the single traveller, i feel much more at home in small or wild places. Logically I have nothing to lose by sticking around, I have the racing cyclist’s nagging conscience that says I have been off my bike too long but the reality is that on a trip like this I need to be rested before I start and the extra day of adaptation to the altitude will be handy before getting on my bike.
I’ll be beginning my journey on Monday by heading south out of Quito on the Pan Americana. Mainly because I can´t wait to check out the giant volcanoes of Cotopaxi and Chimborazo. They are a whole order of magnitude bigger than the volcanoes I climbed and hiked all over in Indonesia so I guess I´m pretty excited. whether or not I´ll try and get my bike all the way up to the Cotopaxi refuge remains to be seen – it´s kind of early in the trip from an acclimatisation point of view to be going straight up to well over 4000m… after all Quito is only at 2850m….

I must confess as well I briefly felt slightly unnerved last night… having been reminded of the problem they have here in Ecuador of highway banditry…. and dogs… not sure which I´m more scared of. I’d already rationalised the risks away before arriving.. logically a bloke on a bike is more of a curiosity than a target and plenty of other folk have cycled round here. However chatting in a bookshop last night an English expat of 20 years I happened to mention I had my bike with me… he stared at me like I had suddenly grown horns or something, said something about stupidity and muttered “better watch yourself” as I left. Ah well nothing like being scared to make you feel alive… nothing ventured, nothing gained and all that…… The reality is that as a gringo, probably much wealthier than the local poulation and probably driving a nice car, he would be a much more obvious target than me and would do well to be careful I guess…… well, that’s what I’m telling myself! Heck, I’ve survived some very hairy situations in the past so if the worst happens then so long as I avoid getting shot then it’ll be just one more story for the pub on my return :o). Reality is that the highlands where I plan on going are supposed to be reasonably friendly, I have no intention of going down into the lowlands where apparently (I´ve been told) the risks are higher. I´m dead excited…

OK, now a local recommendation.. if you find yourself in Quito then the Ecuadorian potato soup at cafe papaya is to die for. Really thick and spicy, loaded with cheese and chunks of avocado. Top stuff. I met a couple of Americans in there travelling with all their white-water kayak gear.. including the boats…. & I thought lugging a bike around at times was hassle! I have to say they were a proper stereotypical pair of Northern Californian ´dudes´… this was actually a good thing from a conversation point of view mainly because they hate George Bush and are in tune with their ´gaia´if that makes sense (and if it doesn´t then tough luck).
OK, that´s it for now. I´m going to go and start sorting my gear out. I may leave tomorrow after all… I just can´t wait to get going.
Hasta luego….