I´m not sure where to start really, or even if I have the energy having spent a thoroughly agreeable {oh, ok, it was muy fantastico…} morning being oiled and rubbed, pulled and pushed and so on by a very nice latina girl… I so needed it…. (the massage that is). I told her I was a cyclist so she gave my lower half a darn good going over before moving onto the rest of me. I wish I´d thought to shave actually, I didn´t know she was going to do that to my face :o) Well worth $25.

OK, back to yesterday then… it felt great rolling out of Latacunga under clear skies in the early morning cool, the snow capped peaks of Illinizi, El Corazon and Cotopaxi keeping me company with the cone of Tungurahua spewing it´s ash cloud on the horizon. I had good legs and a tailwind for the first couple of hours yesterday too, I often wonder what the locals think when a guy on a bike goes past like a train at 40km/hr … I´ve not seen any ´cyclists´in Ecuador… very much a poor man´s necessity it seems. 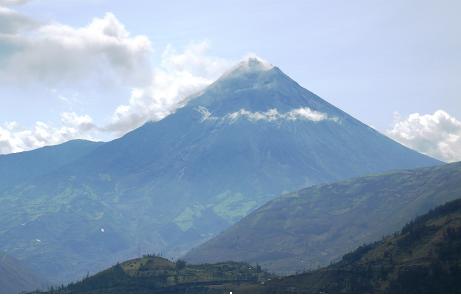 Getting around Ambato was pretty ugly, it´s a big town with the usual collection of shitty ´burbs to negotiate on ugly roads… but still managed to have some fun with it racing some truck drivers up the long and steep climbs… they were in their crawler gears… as was I so we spent some time yelling at each other up the slopes… Quite interesting though to see all the market garden type enterprises around the town… the smell of coriander was thick in the air at one point.

Leaving Ambato behind was great, also waved bye-bye to the Pan American for a while now which is good news. Small roads and sub-tropical countryside formed the backdrop for the next couple of hours of very pleasant, if hot, cycling. I didn´t even mind the few extra km detour thanks to a landslide near Pelileo. Just beyond Pelileo (incidentally this is the jeans centre of Ecuador… the main drag was all jeans for sale..) the road was closed again for surfacing but the chap with the flag waved me through with a smile and I had a good few km of road all to myself. this was nice ´cos it was all downhill on a new surface… I cruised on down to the cheers of the road crew! Thinking about it, everyone on the road yesterday was in good spirits… I can´t ever recall having had so many waves. 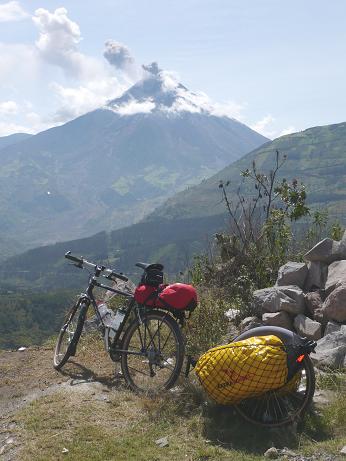 Beyond Pelileo then was all downhill for the final 25km to Baños… bit of a bummer because I have to go back up tomorrow (or the day after, we´ll see…). The views of Tungurahua though were stunning though…. the pics aren´t great as it was midday and very contrasty light but I´ll get better when I leave here in the early morning… assuming it´s not cloudy as it is now. She is really doing her stuff at the moment and a it seems a big eruption is expected any minute… check the national paper below.. it´s been on CNN for Latin America too. The whole area is on alert right now… there was a terrific explosion at 6 this morning that rattled all the windows and doors in my guesthouse… all rather exciting! Just as an aside it´s quite interesting to see all the signs for the evacuation routes painted on the buildings in town. 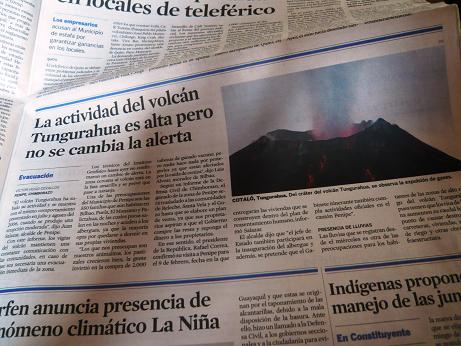 The final few km into Baños were on dirt, the road is regularly destroyed by the volcano so it seems the locals just keep a few bulldozers handy for such occasions. When I arrived here the girl that was at the guesthouse laughed at me when I showed up on the bike… I had no idea why until I caught sight of myself in a mirror… wearing a solid crust of volcanic dust, welded to my face by a 90km of accumulated sweat and sunblock…! It was more of a scrape than a shower to get clean… I´ve decided not to show you that photo unless you ask nicely. I have to wear a lot of sunblock at the moment, Im using an immune supressant to control the eczema on my face and it makes me much more sensitive to UV. I imagine the dust makes a bloody good sunblock too, I´ll collect another coating of it for sure as I leave town.

It´s pretty warm down here, I measured 29 degs C in the shade yesterday afternoon… beats the english winter for sure. The downside is that I´m now 1000m lower than where I want to be next… and when I leave I have to get all that back in the first 30km or so… Sadly the direct road to Riobamba really is out of the question, I checked in the town office here and also rode past the sign… or what was left of it 3/4 buried by debris from the volcano. Bummer. It means that Riobamba is about 100km away and mostly uphill. I think I´ll take it easy and break the journey if I feel as tired as I did this morning… I arrived a bit dehydrated and hungry yesterday… a situation that steak, beans, rice, bananas, water and a few cold beers didn´t do an awful lot to rectify… the beers were soooo good though, never has a cold one been so welcome!

So, what else… well Baños is a very laid back little town set in a deep, green valley complete with gushing river, it´s all down hill from here to the jungle. I´ve been for a spin in the mountains around to loosen up my legs (before the massage) and I suspect I will be spending the rest of the day in the rather funky little cafe round the corner. I have no real desire to go rafting or anything right now… I´ve done it before and I get my fill of adventure just riding my bike here…. besides, riding here is hard enough work as it is.

OK, that´ll do for now… I´m off for a tropical smoothie. Wouldn´t mind another rub actually but that would be a bit indulgent…. you can paypal me the funds however if you like… it is my birthday soon…. :o)

p.s gawd it would be so easy to stay here forever… I fear if I do not leave tomorrow I never will… the burritos, the beer, the girls… ahem!