ah, where do I start…. I left you a few days ago in laid-back Latacunga (ace town, my favourite in Ecuador I think) so I guess it makes sense to start the day after…. On the road to Zumbahua…. I felt reasonable that morning as I pedalled across the bridge out of town heading west with Laguna Quilotoa in my sights… The only fly in my bike flavoured ointment being the climb to get over the western cordillera at around 4400-4500m… what I didn’t expect, given my map only shows altitude every 1000m or so, was that I would have to cross two such passes. This was a bit of a bugger really, folk who are used to taking the bus everywhere have no idea just how nasty a long climb at altitude can be on a bike… especially given that once climbing I realised I was still pretty weak from being sick. Climbing here I think is harder than the Himalaya, the altitudes are less and surfaces usually better but the roads are much steeper…. 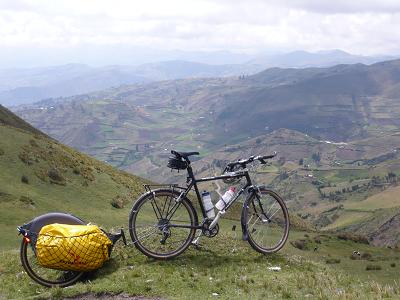 (climbing up from Latacunga) 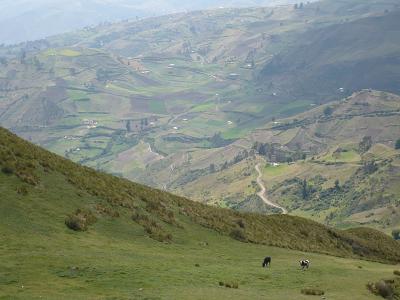 After 40km of continuous climbing  I came across a police checkpoint on the empty plateau… the lonely copper sat up there with his truck, hut and orange cones (yep, not just a British phenomenen) said “ah, it’s only one hour to Zumbahua…” I was a bit dubious so asked him hopefully if it was mostly downhill, “sort of uppy downy” (or near enough in Spanish anyway) was his reply. So off I went with a smile while trying to ignore my sore legs. I had to deal with a bit more hard climbing that seemed to never end before the road dropped all the way back down to around 3500m from 4500… and then climbed back up to 4100m…. arrrgh, I honestly don’t know how I did it, feeling quite ill again by now… willpower and stubborness (aka stupidity) I guess, it was a day for truly suffering (still an excellent day tho… like mountaineering in that respect). Made it to Zumbahua in a rather shameful 7hrs (5.5hrs riding, the rest dozing, eat etc etc) for the 70-something km. 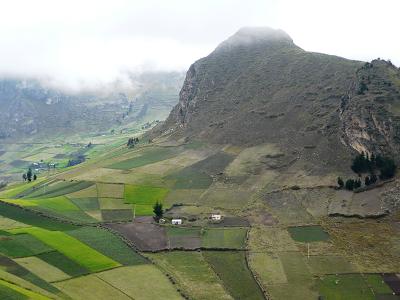 Zumbahua on a Friday afternoon was most excellent,  I like these kind of places… you could not imagine a more desolate one-street town! Bit like Igherm where I was stranded by weather in the Anti-Atlas. Very much wild-west feel with a mix of old wooden buildings and tatty perpetually half-finished concrete block ‘erections’! Dust was blowing in the streets and there were just one or two folk hanging around doing nothing… Brilliant. The setting was fantastic, the village hugs a steep and green mountainside at about 3500m altitude with peaks all around. 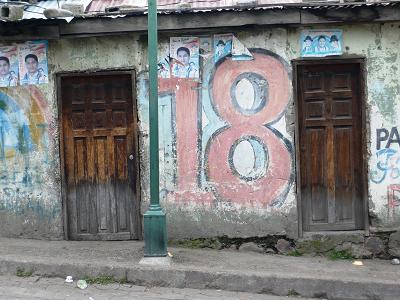 Found a place to stay, a wonky old wooden building but I had a bed and a window so that’s all I needed really. Was checked in by possibly the most mature ten-year old (I’m guessing) girl I have ever met (she saw me arrive on the bike and came running round the corner after me, all smiles)… all business though I did catch her playing with friends in the street outside later! The kids do grow up so fast here, no choice I suppose. The only ‘problem’ that afternoon was the apparent lack of edible food in town! Post-ride snack was a couple of cups of hot, greasy chips (once again chips=french fries!) drenched in salt from a woman sitting on a wall with a gas burner and a bag of potatoes.. they were ace, followed by a can of tuna I had, some crackers, yogurt and dried fruit. That was around 4pm, I had to go to bed after that, after such a hard day every muscle in my body was aching, even the ones that seem to have nothing to do with riding a bike and especially the shoulder I injured last summer. Stayed in my sleeping bag ’till around 7pm then went out in search of more food.. the windswept “plaza” was empty save for a woman and her cart with a burner selling fried corn (I think… tasted good tho) and more chips. I wandered to the shop in search of icecream (this is the great thing about Ecuador, no matter how remote and flyblown a place you end up in, somebody will have  a dusty and scratched freezer full of icecream!) It was perfect, chocolate and vanilla, the evening got a little surreal then… at the back of the shop surrounded by empty beer bottles were three friends I’d bumped into before. Of all the places….. ready made entertainment. 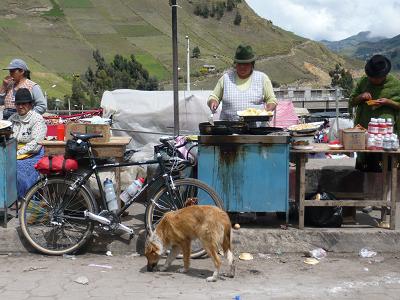 Overnight I had a chance to appreciate the transformation of a sleepy town into a crazy, chaotic bustle of trade… when I crawled into my sleeping bag at 8pm (I know, exciting life I lead….!) the plaza was deserted… Saturday though is market day and from 11pm to 6am outside my room was a hive of activity (not much sleep for me!), when I got up the town had been transformed into a fantastic local market packed with folk from the surrounding farms and villages. Had some bread for brekkie, normally I can handle a lot of local food early in the morning but I think because my stomach was still a bit tender the smells from the steaming vats of sheeps heads and god knows what else were genuinely stomach turning… though as I write now I could quite fancy something meaty to chew on….. 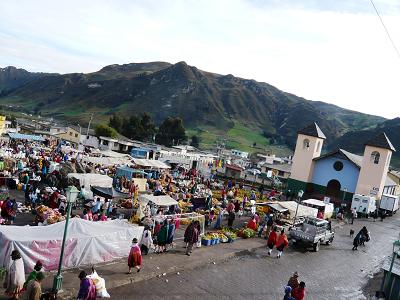 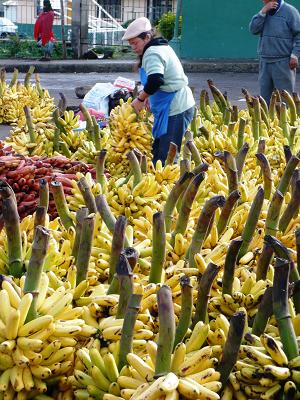 Saturday then I cycled up to the lake, Laguna Quilotoa at 3900m. The crater lake is stunning, in the flesh (water? & sulphurous at that) it is breathtakingly beautiful. The only downer having to run the gauntlet of 6 sets of kids throwing water at everything that went past (it’s the start of Carnival week)… I managed to avoid the first 5 groups with a stealthy approach and then my superior (ahem!) sprint.. The 6th lot however soaked me fair and square! I was quite impressed with their homemade water cannon from a big length of metal pipe and an internal plunger, some serious firepower! 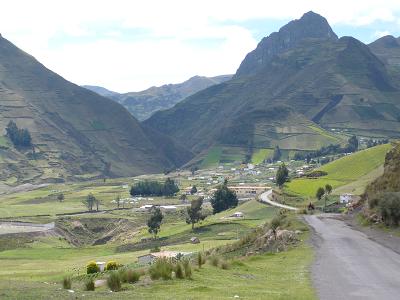 (down the road to Zumbahua) 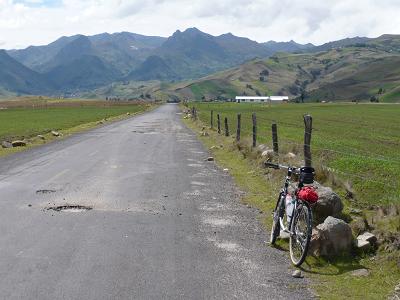 Despite the difficulty I am loving the mountain roads here. Aside from the views sometimes on the plateaus it is hard to believe you are at nearly 15000ft because the landscape in some places is so soft and rounded with every square inch possible cultivated by the campesiños, even the impossibly steep slopes exhibit a patchwork of small fields. Quite unlike the areas of the Peruvian Andes I have been through. It is a very poor area, the mountains are dotted with the most basic of huts imaginable that just look like piles of old grass dotting the mountainsides. Poignant also are the little white crosses, often with flowers on, that are present on nearly every bend. The roads are dangerous, especially in poor weather and at night with no markings or indications of where the road ends and the cliff starts….The worst bends will have a whole cluster of crosses, all in white with the names of loved ones that died and messages from those left behind. Quite sad… 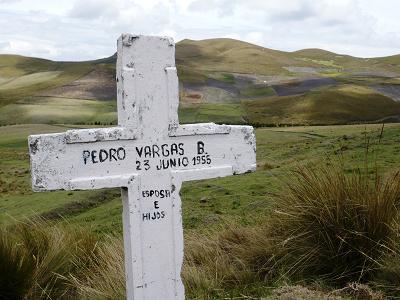 The dogs out there are real buggers, I can handle up to 3 in one go but enroute to Zumbahua had the worst encounter yet on this trip… 4 really nasty hounds. I couldn’t outrun them uphill so I was off the bike and defending myself with stones and stick as best I could but they circled me. One managed to get in behind before I could whirl round, he didn’t quite get me… rather he collected a mouthful of high velocity boot from me but I collected a deep claw wound on the back of my leg. I cleaned it up OK in Zumbahua, no sign of infection or anything, just made a bit of a mess in my shoe with the blood (lucky I had my black socks on :o) They gave up after that with a few bulls-eyes with stones from me. I never expected to get this much target practice here. Next time I’ll bring one of those little ultrasonic gadgets, I did think about it but I figured the dogs couldn’t be worse than Morocco, there I faced up to 10 in one go but at the slightest appearance of throwing a rock they scarper…! Oh well, just another of those occupational hazards of riding here and if you are reading this and planning a trip don’t by any means let them put you off, just pack a few rocks, a decent 1st aid kit (well you would anyway wouldn’t you….) and a Rabies jab just in case.. :0) 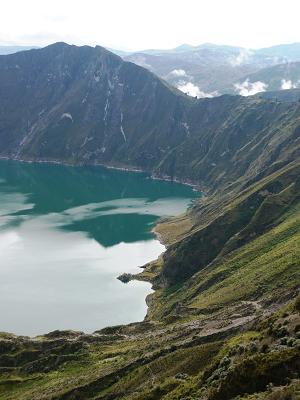 (pics just can’t do this justice)

I have no regrets about being sick for a few days, I have to admit lounging around in Latacunga for a few days doing bugger all was a highly agreeable state of affairs. It’s not something I seem to have time to do at home…. I try hard at work sometimes but my periods of idleness are forever being  interrupted there by well meaning folk with work for me to do…. The locals in Latacunga are great to practice Spanish with and if you are lucky, like I was, you will get collared by a bunch of college girls looking for English practice for an hour or two, and videoing it for their coursework, and if they think you are really nice they´ll buy you a big multicoloured lollipop afterwards…… I only know this because I must be really really nice :o)

What other news… ? Well I also decided to ditch my camping gear, I wasn’t sure how easy it was going to be here without a tent so I brought some real lightweight gear “just in case”… I would have used it on Cotopaxi I think but now I just want to get to Colombia I won’t be bothering (I expect to ride across the border on Tusday evening). The Tiana in Latacunga has links to a local organisation working to improve the schools and so on in the villages around here, so I left tent, stove and waterfilter behind. I expect it will sell at some point to someone heading down to Sangay for example for some trekking, and the $$$ can go to one of the schools. It only weighed around 3kg total but it’s 3kg less I have to lug across all those mountain passes…. and the weight saved means I have indulged in a pair of jeans to wear in the evenings (such luxury!) and to make the most of the life once I get to Cali which has something of a reputation… :o)

Oh yes, I also have a bit of a black eye tonight… I’d like to be able to say it was an injury sustained while fending off armed bandits with my cycle pump but sadly this has to be one of the silliest cycling injuries possible…. I poked my eye on my bar end while leaning down to fiddle with the computer sensor… good eh! I won’t tell that story in the pub back home….