I’m in San Rafael today having ridden approx 235km from Malargue.. 160km yesterday and a brief 75 today… so as usual here are my ramblings.. enjoy.. but first the last pic I took in Malargüe on my way to a big juicy steak.. ;-) 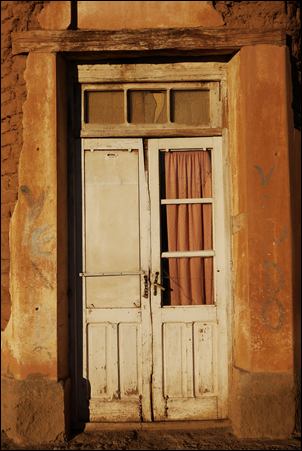 9 February
Left Malargüe this morning at 9am not entirely sure where I was going to stop that night…. 50km north El Sosneado was marked on the map and for that first 50km my body and mind was really struggling to get into gear despite the relatively flat (slight upwards incline) and easy riding… I’d pretty much made up my mind that if El Sosneado actually turned out to be a place I’d stop for a coffee and think about the road ahead… maybe even stopping there for the night if possible…. from El Sosneado the roads heads north east across the pampa towards San Rafael.. a further 134km of nothing away.
El Sosneado turned out to be a bridge and a gas station… there was a shop where I bought some orange juice and sat in the sun with my map debating whether or not I was really up for a 184km day to San Rafael…. I wasn’t, instead I decided to head to El Nihuil, a short sidestep off the road to San Rafael but still 160km away, lol. El Nihuel sits at the southern end of the Cañon Atuel on the shores of a vast artificial lake… it’s something of a resort area for Mendoza residents so figured there’d be food, a place to camp and so on…. and that is where I am as I write this, sat by the shores of that lake having had another marathon day on the bike, this one though I enjoyed far more than that day crossing from Las Lajas to Chos Malal. 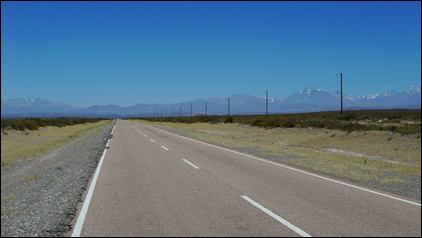 back down the road to El Sosneado

The stretch from El Sosneado was quite something, heading away from the wall of the Andes the road stretched ahead of me, dead straight, for the next 90km to the turn for El Nihuel… with no significant climbing, just a continuous series of mostly gentle ups and downs I made pretty good progress…. ’till the wind came up, hehe. So, after the trials of the past couple of weeks with the continuous north westerlies hindering my progress.. the moment I head east looking forward to the possibility of a tailwind.. what happens…. I get a north easterly. Brilliant. Must have collected some bad karma somewhere along the way.. 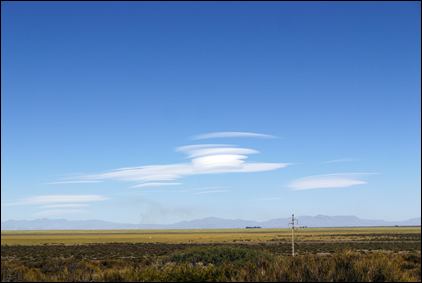 lots & lots of bugger all

It’s been a hot, tiring ride, the monotony of the pampas wasn’t too bad… for a while I could marvel at the sense of vastness… and then admire the odd ramshackle windmill standing alongside the occasional and equally ramshackle farmstead.. and 113km from Malargüe I passed a salt pan shimmering in the sun.. and that was about it aside from one or two examples of the generic dessicated flat snake endemic to desert highways around the world :-) I did have a brief celebrity moment when a chap in his car waved as he went by then pulled in about a km ahead so he could video me flying past with the mountains in the background :-) I wish I could say I pulled a fab wheelie as I went past but with 20kg of gear onboard and another 6kg of water I couldn;t quite manage it. He had to make do with a silly grin and “Hola!”. 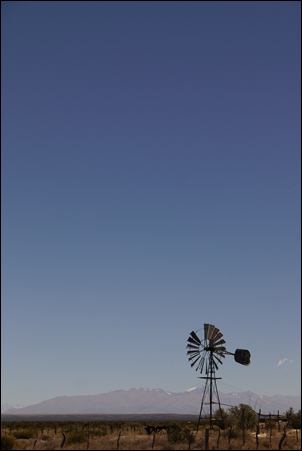 The turn for El Nihuil sported a gas pump and a shop where I gratefully collapsed in a chair for a while with an ice cold ‘gaseosa’ bought from the lady living there who was awfully nice despite me dripping sweat all over her counter… At this point I had just 22km to go to El Nihuel or just 54km to San Rafael… I did consider keeping going that way but decided the canyon and lake would be worth a look. That last 22km stretch wasn’t much fun gently uphill and directly into the freshening wind, such a cruel way to end a long day when your legs are tired and stomach can’t handle any more food… hehe. Looking back at the day it was a satisfying rather than fun one, I’d rather not have many like that – bit dull, but as a way to feel the scale of the countryside and gain a sense of covering big distances on the bike it was perfect. 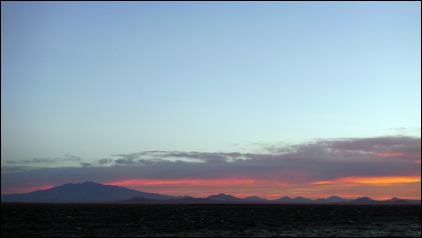 am no fan of sunset pics & this one is just rubbish, but it serves to show the view from my tent :-)

So here I am, this is a truly stunning spot to recover from a long day and ideal in that I don’t have to go anywhere or do anything… there is shop right here with everything I need (makes a change, hehe) including cold beer.. my tent is on the lake front.. the water is much warmer than those lakes down south and I’ve been for a swim…well, sort of a swim – more of a dive in and an exhausted bob around in the waves. Ideal. The view south is stunning, mountains and what look similar to those small volcanic cones I passed a few days ago on that difficult day to Bardas Blancas. The wind is howling here tonight, shockingly I’m feeling a tiny bit smug… my little wedge shaped tent is a darn sight more aerodynamic than the great flappy things the other campers have (but not much more immune to the dust flying around..) though having said that they are a really nice & friendly bunch and great company for the evening :-)
As for the canyon, well apparently it’s 79km of very hilly ripio to San Rafael that way.. so I will leave it until the morning to see how my legs feels before making a decision on that one or whether to backtrack back to the highway, either way it’ll be 70-80km for the day but one vastly easier, wind permitting… than the other :-)
10th February
got up relatively late this morning (for me) at 8.30am, crawled out of my tent to see whitecaps racing across the lake in completely the wrong direction.. i.e from the north east… ho hum.
I felt pretty good this morning, well recovered from yesterdays efforts – it took a couple of weeks but I seem to be properly adapted to daily high mileages now and recovering well overnight… feeling strong now :-).. it’s always like this when touring, not something normal training at home can give you. Anyway, I digress.. I didn’t get on my bike ’till 10am, packing up was a leisurely faff rather than a focussed affair, nice knowing I only had between 75 and 80km to go.
I rode out into the village of El Nihuil to a junction where a right turn would take me along the Canyon or a left turn would take me back out to the highway… the legs felt fine but it was the head that let me down, after weeks out in the wilderness with high winds, high mountains and rough roads all I could think about was shady sidewalk cafes and juicy steaks… so I turned left :-) looking back  I think it was a good decision, unlikely the canyon was any more spectacular than the terrain I’ve already covered and with the fresh NE wind it would have been something of a wind tunnel I reckon… 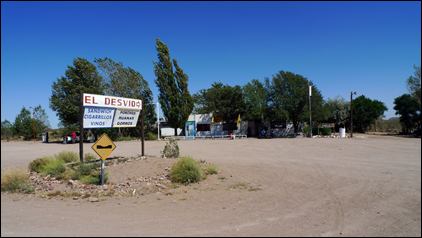 that gas station... please note the angle of the trees in the wind :-)

The first 20km back to the gas station at the junction was slow, something of a warm up for the legs, and at the junction I had to fight an irrational compulsion to turn left back to Malargue just so I could enjoy a tailwind for a change… but after stopping for a coffee and packet of biscuits I came to life and really enjoyed the remaining 50km to San Rafael. The wind was much fresher than yesterday, I was lucky, it would have been a bit of a grovel I think with this much of a headwind. Anyway, I put my head down and time-trialled all the way to town… not always looking where I was going I managed to run over an enormous hairy spider the size of my hand just sitting on the edge of the road… my front tire sported a damp hairy patch for a short while…
There was just one climb at about 30km to go followed by a lovely steep, hairpinned descent down to the valley floor… and a complete change of scenery. After weeks of parched desert and pampas to arrive amongst lush tree lined roads and vineyards with birdsong was truly food for the soul… though with a very slightly bitter taste, I’m back in civilisation and thus ‘normal’ again rather than enjoying the romance of long distance bicycle travel in wild places.. still, plenty more of that to come. 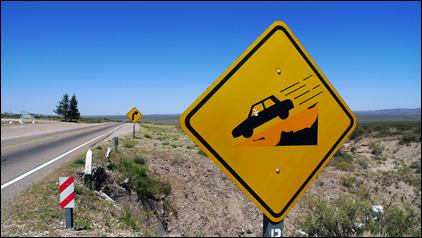 very few road signs populate the outback highways... these ones are my favourite :-)

So that’s it really, I’m only 200km from Mendoza but not due there until Sunday so I may as well start winding down now. The plan is to leave there on the 20th for leg 2 up to Salta or Jujuy in the far north before tackling the Bolivian Altiplano… can’t wait :-) 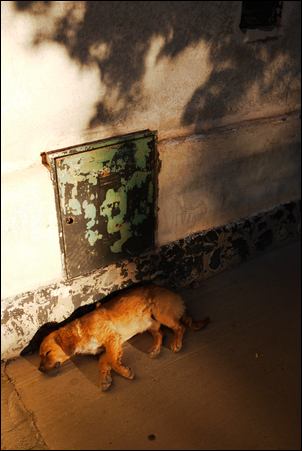 Siesta is such a great concept