A few remaining bits and bobs of street photography from Ayacucho. I finally left early on Sunday morning to arrive a day and half, and three collectivos/buses later in Cusco. I hadn’t planned to visit Cusco again but thanks to bronchitis and the time spent trying to recover it felt like the only place to head to. From Ayacucho buses seemed to mostly go to Lima.. or Cusco, direct or with various vias depending on whether or not you’re lugging a bicycle. Honestly, when it’s not being ridden a bicycle can be a pain in the arse. 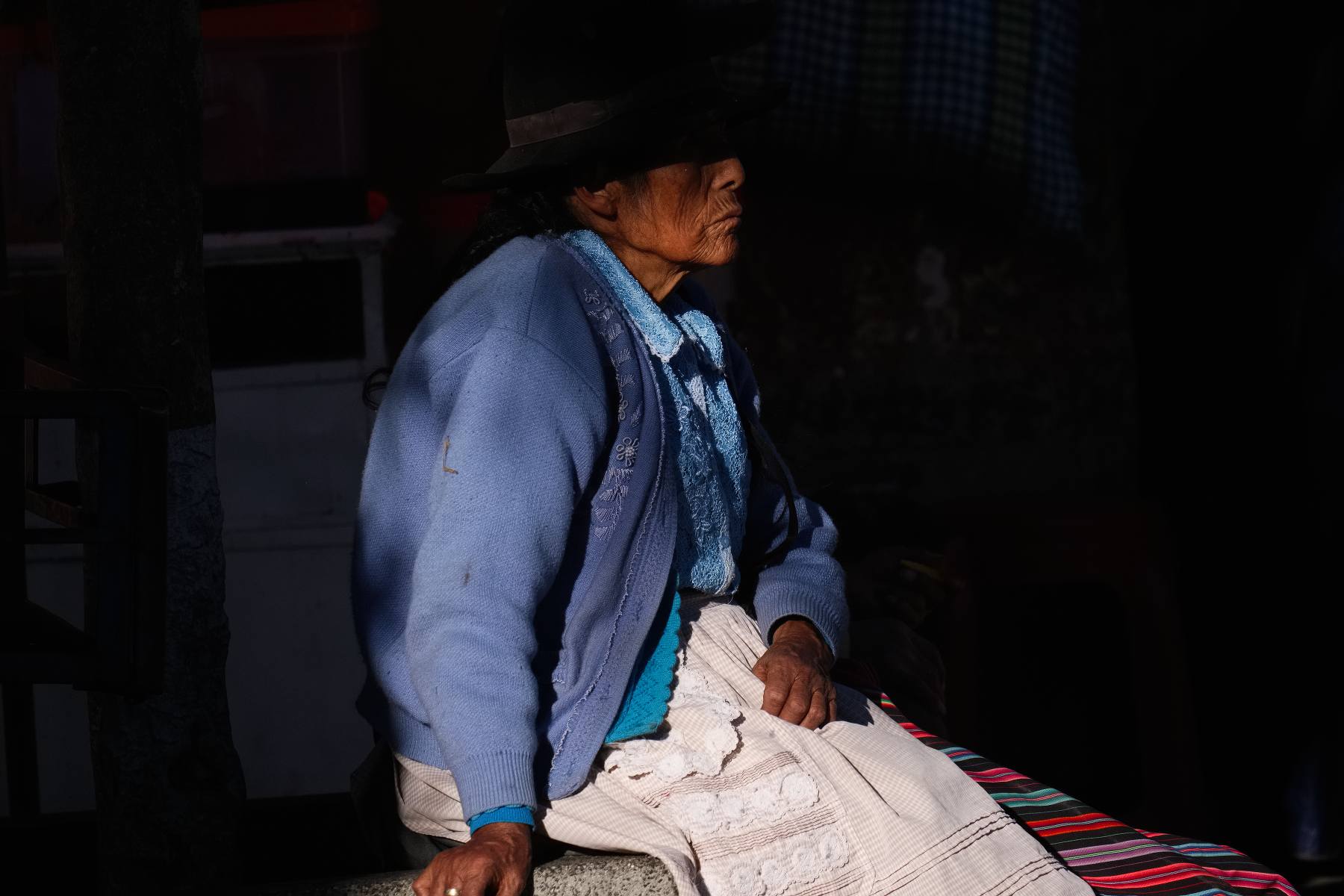 Ayacucho.. I left town with some very special memories thanks to my hosts. It’s not as breathtakingly beautiful a city as Arequipa – it doesn’t have a perfect volcano as a backdrop after all – but it grew on me immensely and I would not turn down the opportunity to visit again.

As a cyclist bus rides are depressing at the best of times, bus rides when morale is low, the buses are overcrowded, and the cabin is filled with the smell of burning tyres from hurtling around the mountain hairpins at white knuckle speeds are really not much fun at all. Five hours from Ayacucho to Andahualyas, followed by a further four hours from Andahualyas to Abancay, arriving after dark, and distinctly grubby from being roped in to shift enormous sacks of potatoes, at least my body weight, up and down off the roof of the bus on a number of occasions. I didn’t really mind that part, I prefer ‘interactive travel’. It had been market day in Andahuaylas I think and folk were returning to their villages with unsold wares. The large net of live guinea pigs tied to the roof, along with the potatoes and my bike, were not particularly enjoying the ride either judging by the squeaks coming through the thin metal roof. With a 5.30am start in mind, to catch a Cusco-bound bus, for the following day, I spent an uncomfortable night in a pad near the bus station in Abancay. Uncomfortable in part thanks to a truly disgusting lunch during the brief stop in Andahualyas bus station. Cold, greasy rice that could easily have been a few days old, topped with a few lumps of what was apparently pork but bore a much closer resemblance to the fragments you find on the highway after a truck tyre has exploded. They could easily have been older than the rice. I filled myself up with icecream in the end. 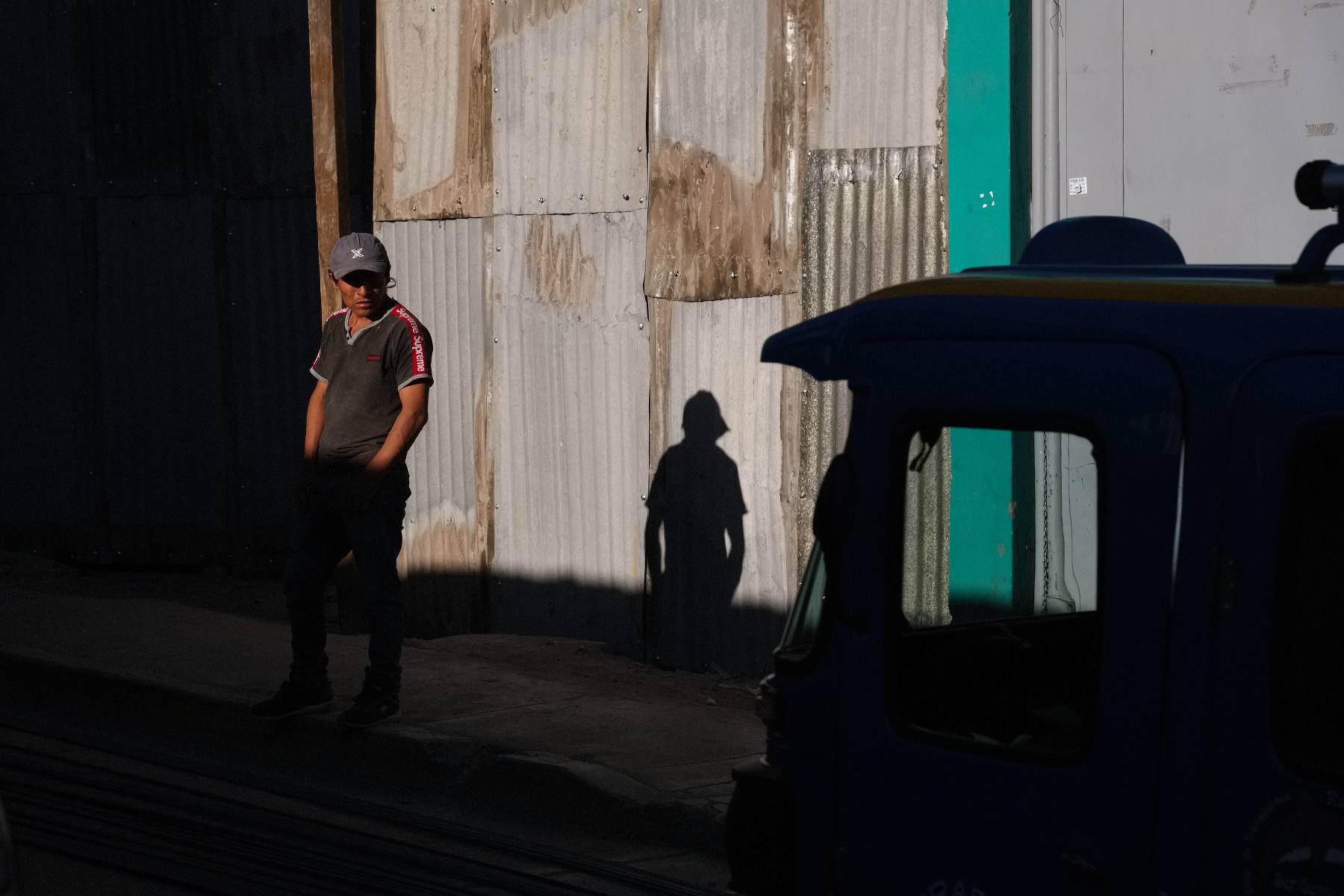 Cusco has been something of a shock. I knew it would be but I don’t think I was quite prepared for the reality. I’ve been lucky enough to stop in here three times over the last twenty years; I originally came to know the place as a quiet, friendly highland town, with a little bit of low key tourism, one bar and a peaceful plaza with small local businesses under the arches. Nine years ago I stopped in again. The transformation was breathtaking with the tourist boom well under way. It still felt a bit like Peru however. This time around, with ten happy hours seemingly happening on pretty much every street, western franchises such as McDonalds, The North Face, KFC, and so on occupying the prime real estate in the plaza, and tourists seemingly outnumbering locals in the center, perhaps something like 100:1, it really doesn’t feel much like Peru at all. It is still a beautiful city, and the combined Inca and Spanish architecture is still breathtaking, but it is much harder to get under the skin of the place and engage with the locals properly, understandably so. Underneath it all though the local folk are still genuine Peruano and it’s become something for me to try and tease a smile, if not a laugh, out of the some of the continuous stream of street vendors that approach in the hope of making a sale – whether it’s a massage, a mass-produced painting, or a joint. It must be soul destroying at times dealing with hundreds of unsmiling tourists every day, and I have nowhere else to be so why not, it’s certainly introduced a few highlights into my day as people suddenly open up, smile, and begin talking. Then it feels like Peru again. 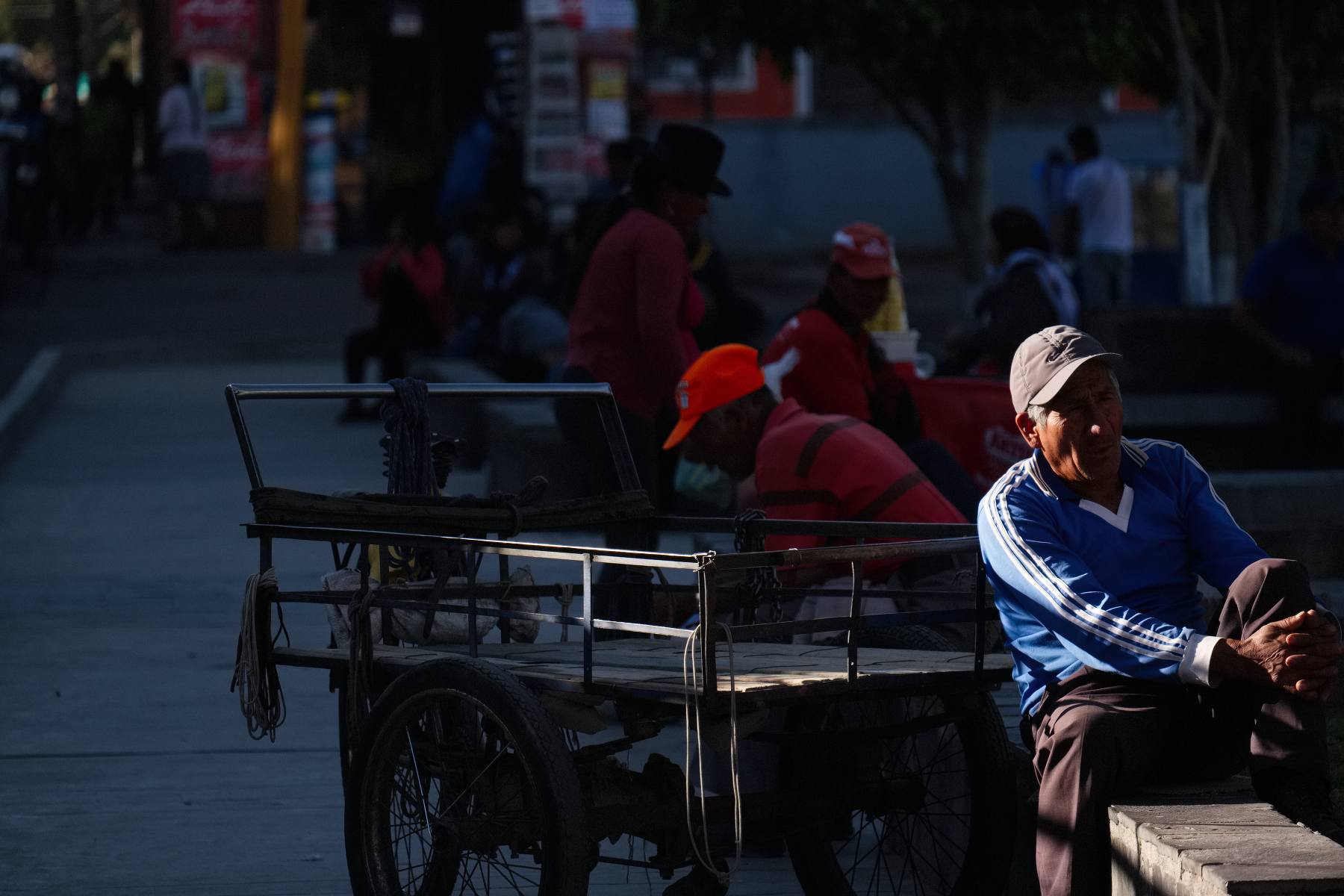 As for riding. I still feel in something of a state of limbo. I came to Cusco because it gives me many more options than Ayacucho. From here, depending on what happens, I can ride towards Bolivia, get a bus to Arequipa, Puno, Bolivia, wherever. It also has a lot of good coffee and cake. I legged it up the hill to Sacsayhuaman this afternoon. I didn’t feel a particular imperative to visit again but at an altitude of 3700m I wanted to put my lungs under a little bit of stress after sitting on my arse, eating icecream, in Ayacucho for two weeks. Still a bit blocked with an aggravating cough at times. The other obstacle I’m facing is a touch of depression. Riding a bike has been my way to manage depression over the years. Not being able to ride my bike always has a detrimental affect, so that combined with this annoying state of limbo is making it hard to get my shit together and take any kind of positive action beyond putting off any kind of positive action. I had thought to leave town on Friday, start riding, see how I get on.. and if the chest is too rough turn around and come up with a plan B. I’m here because I love the mountains and the high places, and I don’t really want to let that go…

Anyway enough of that, introspection and self-absorbed rambling never makes for a good read. So here are a few more snaps. 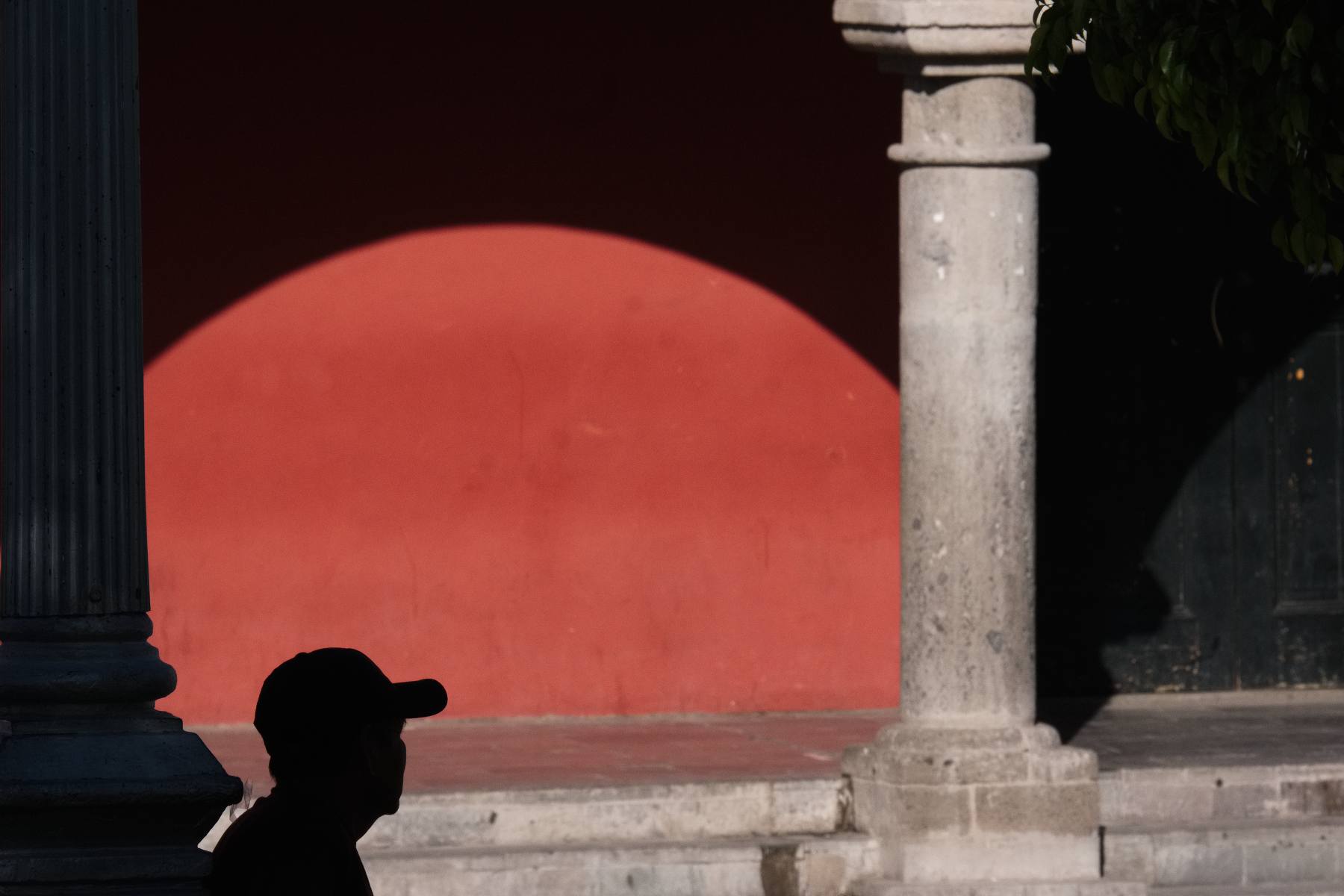 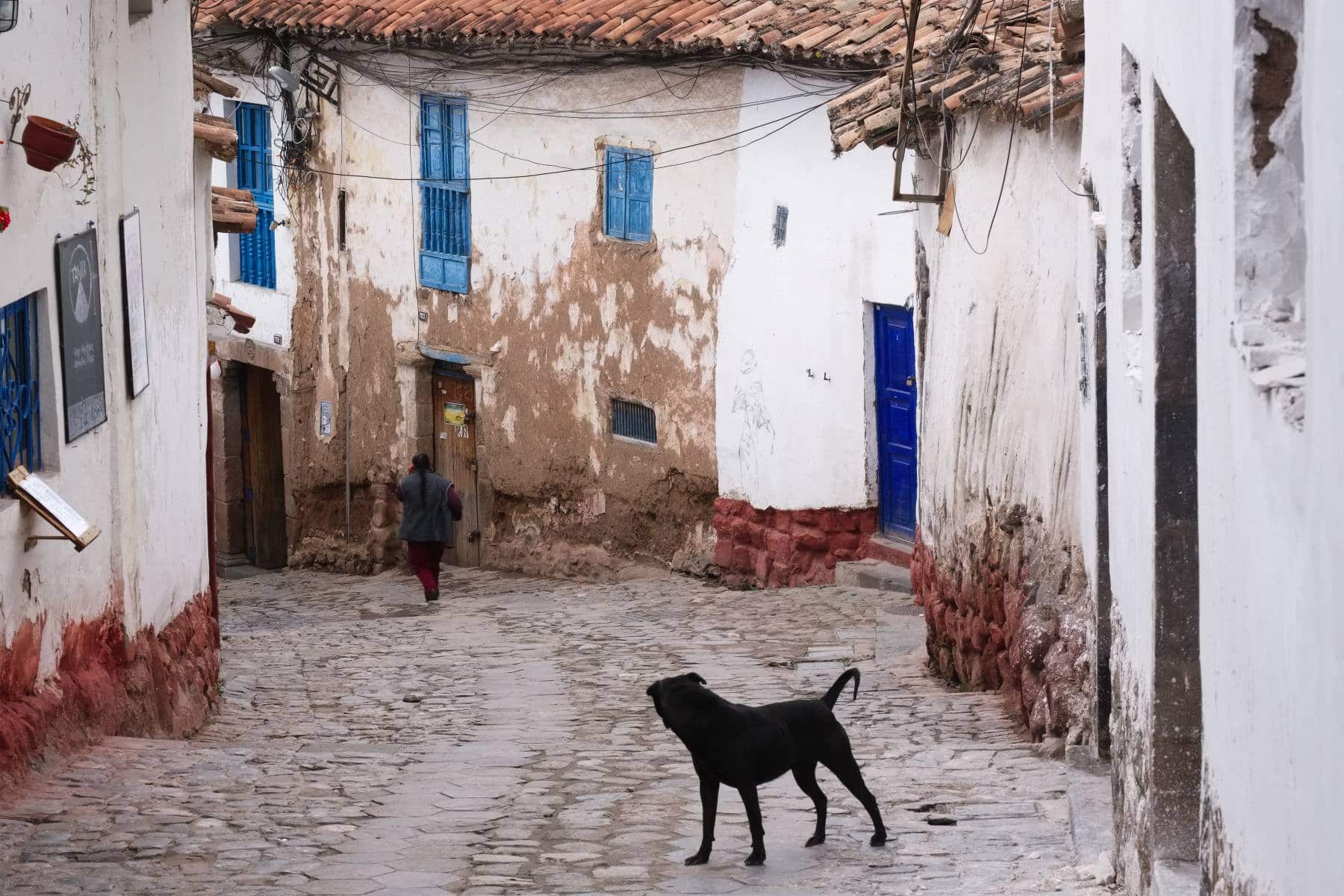 Cusco. I’ve not been able to find any kind of groove here with regard to street photography. I think it’s the nature of the place… busy with tourists, stuffed with souvenir shops and so on, it’s not an environment in which I feel particularly at home at the moment. The light has been crap too thanks to the weather being largely cold and wet since I arrived. 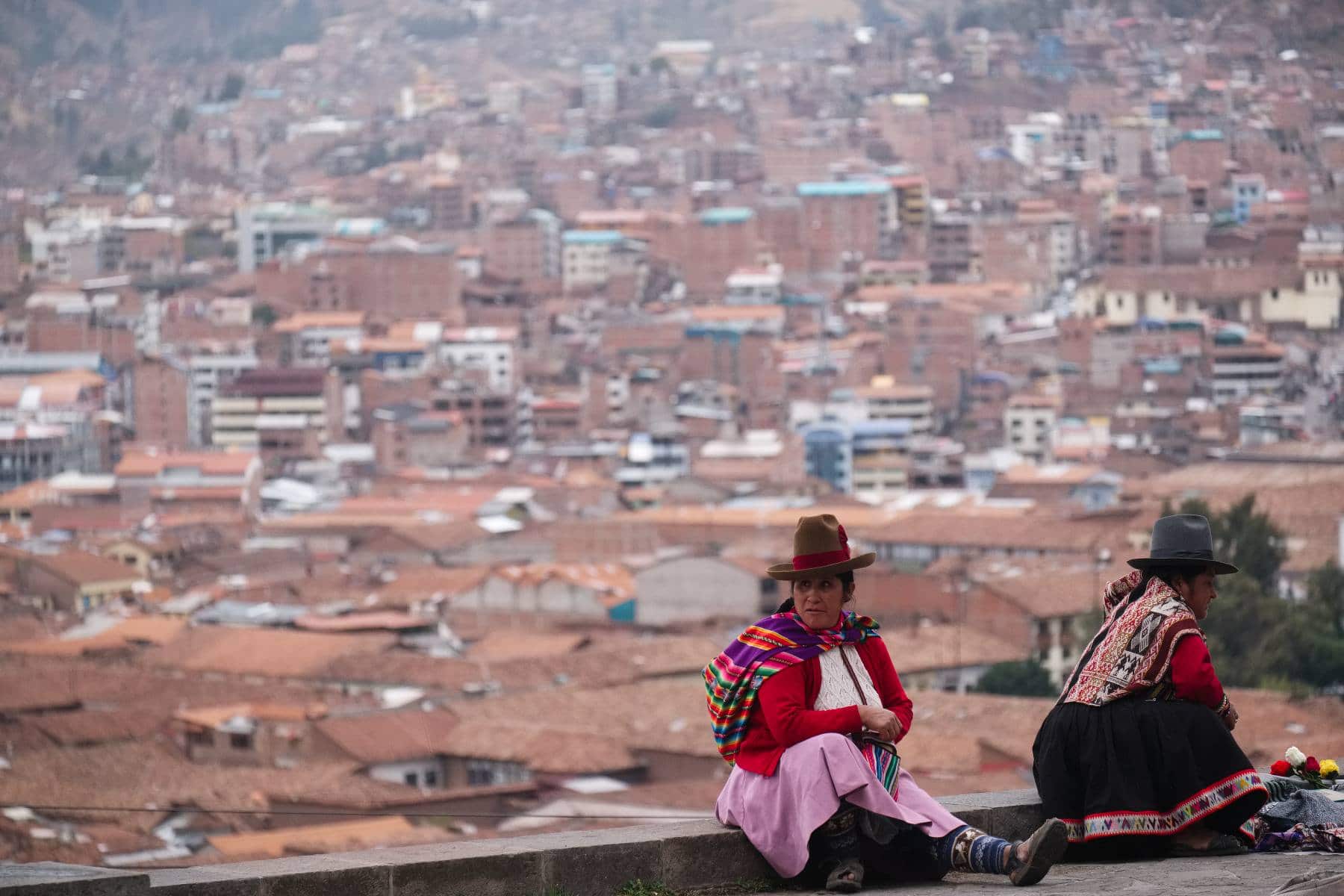 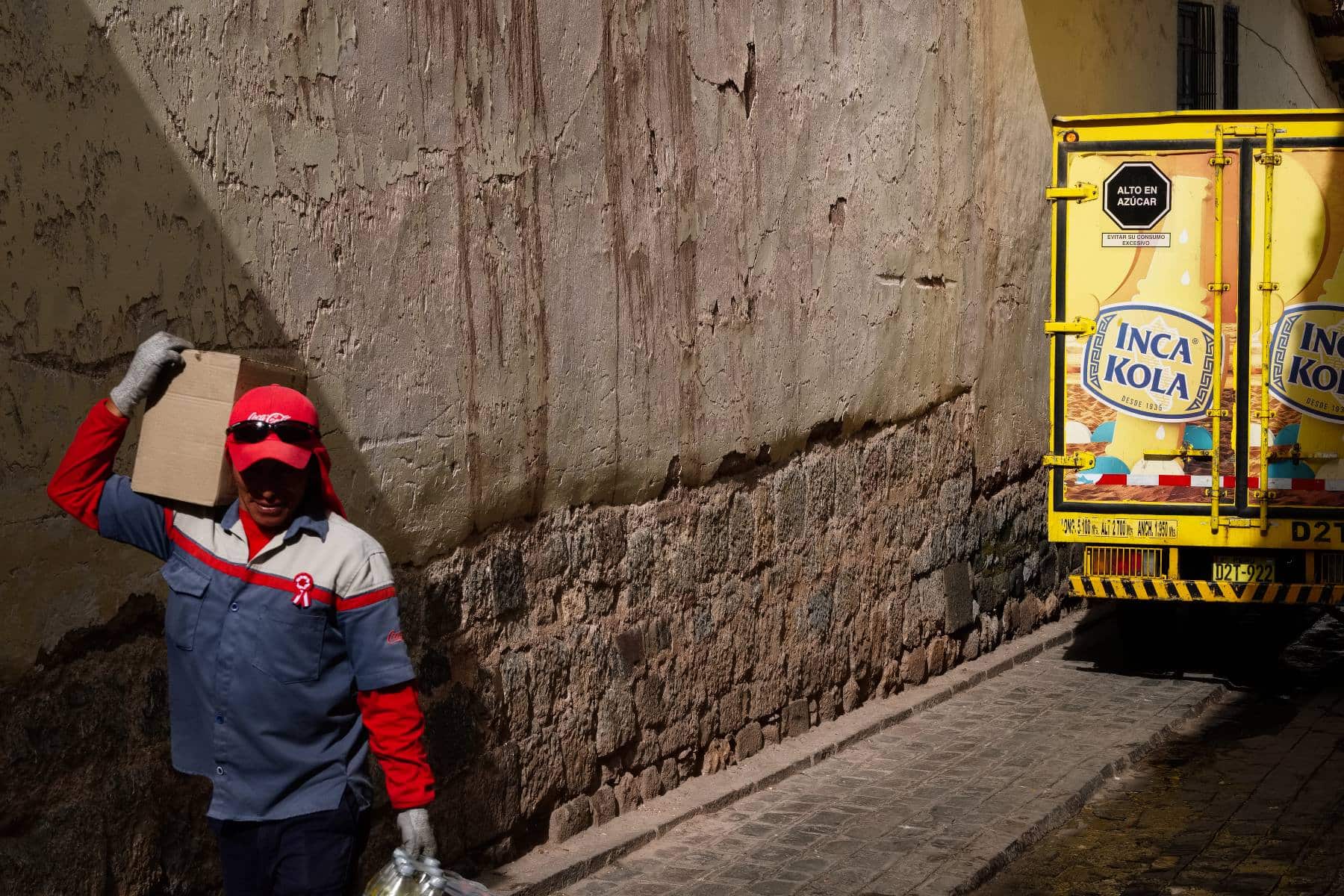 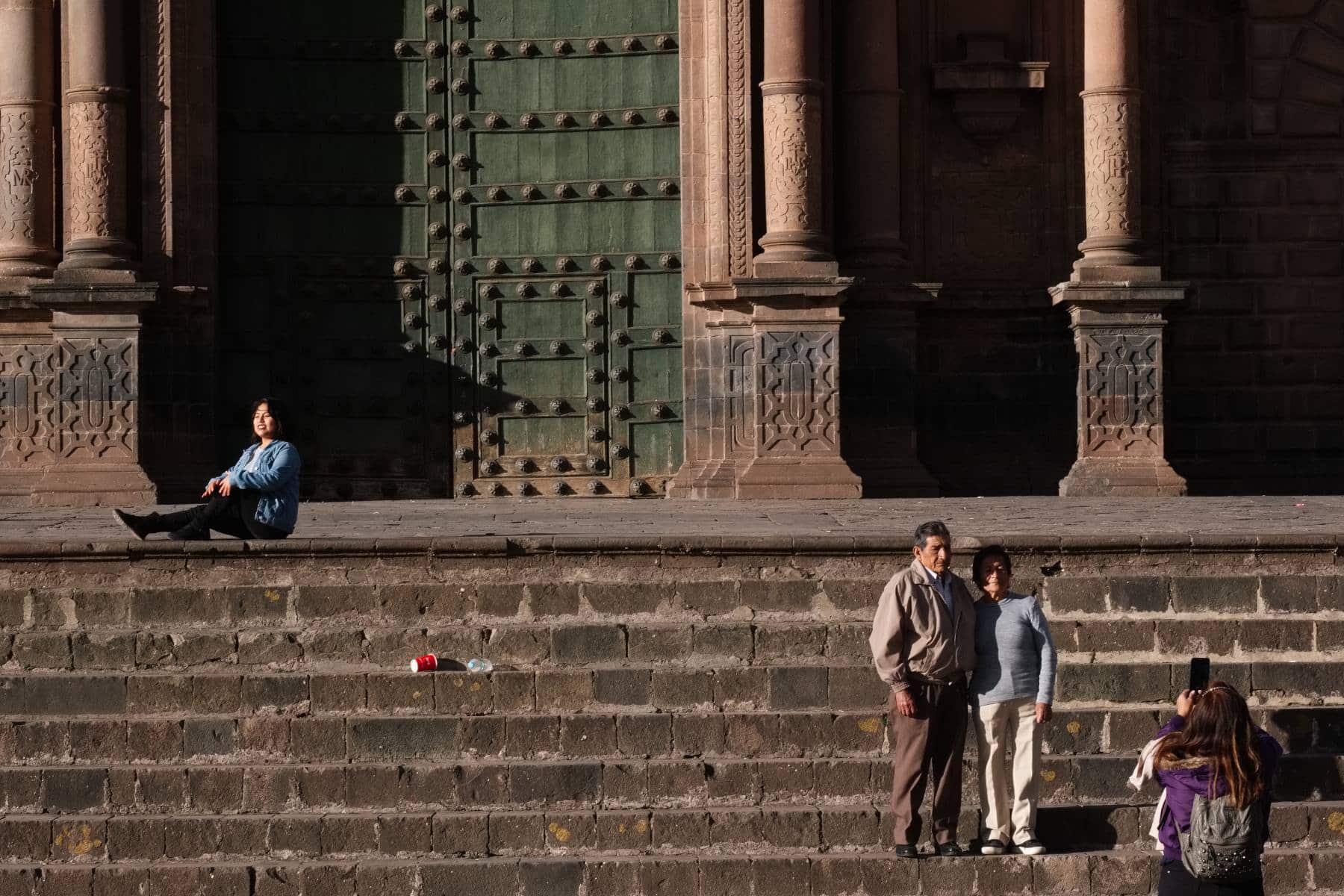 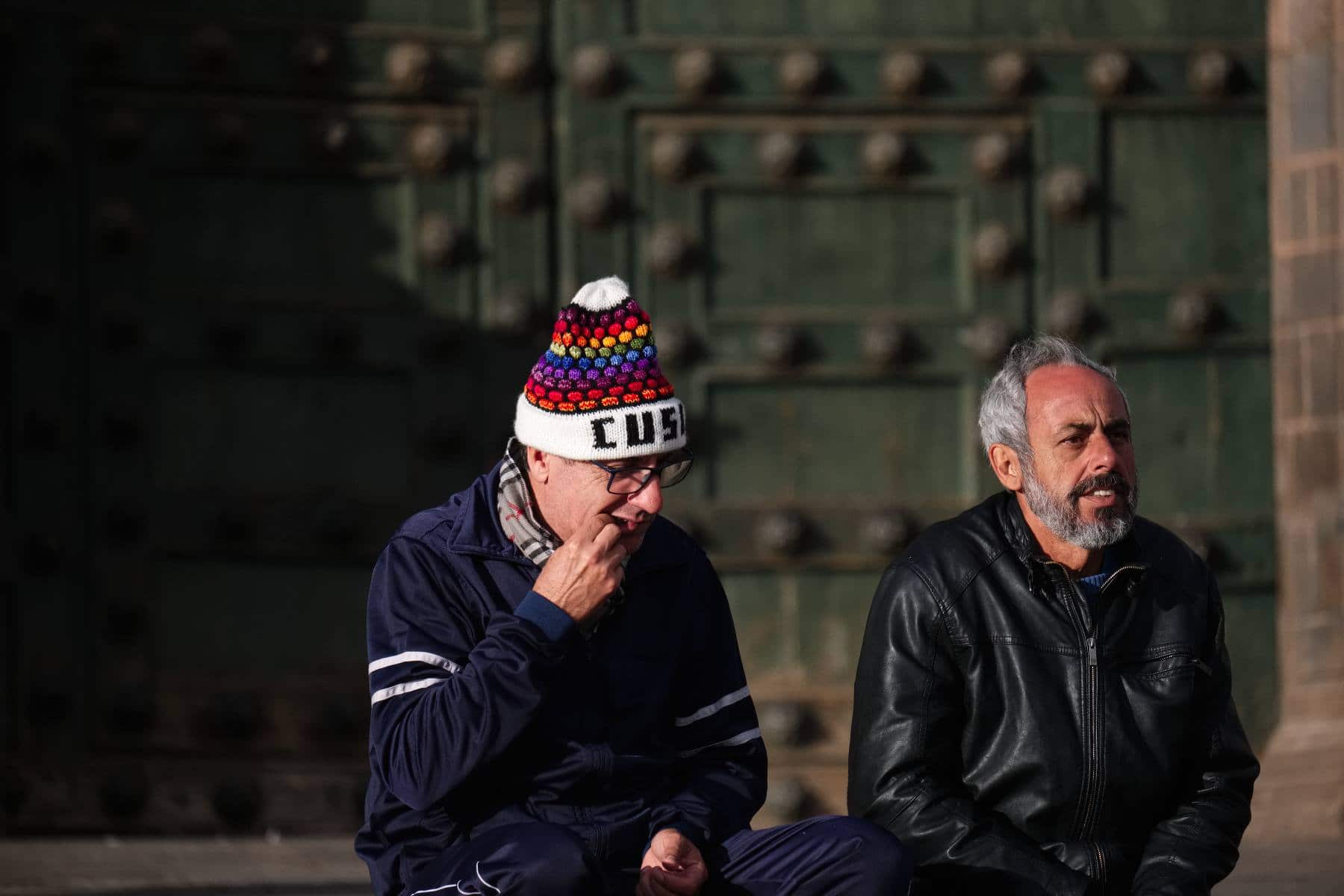 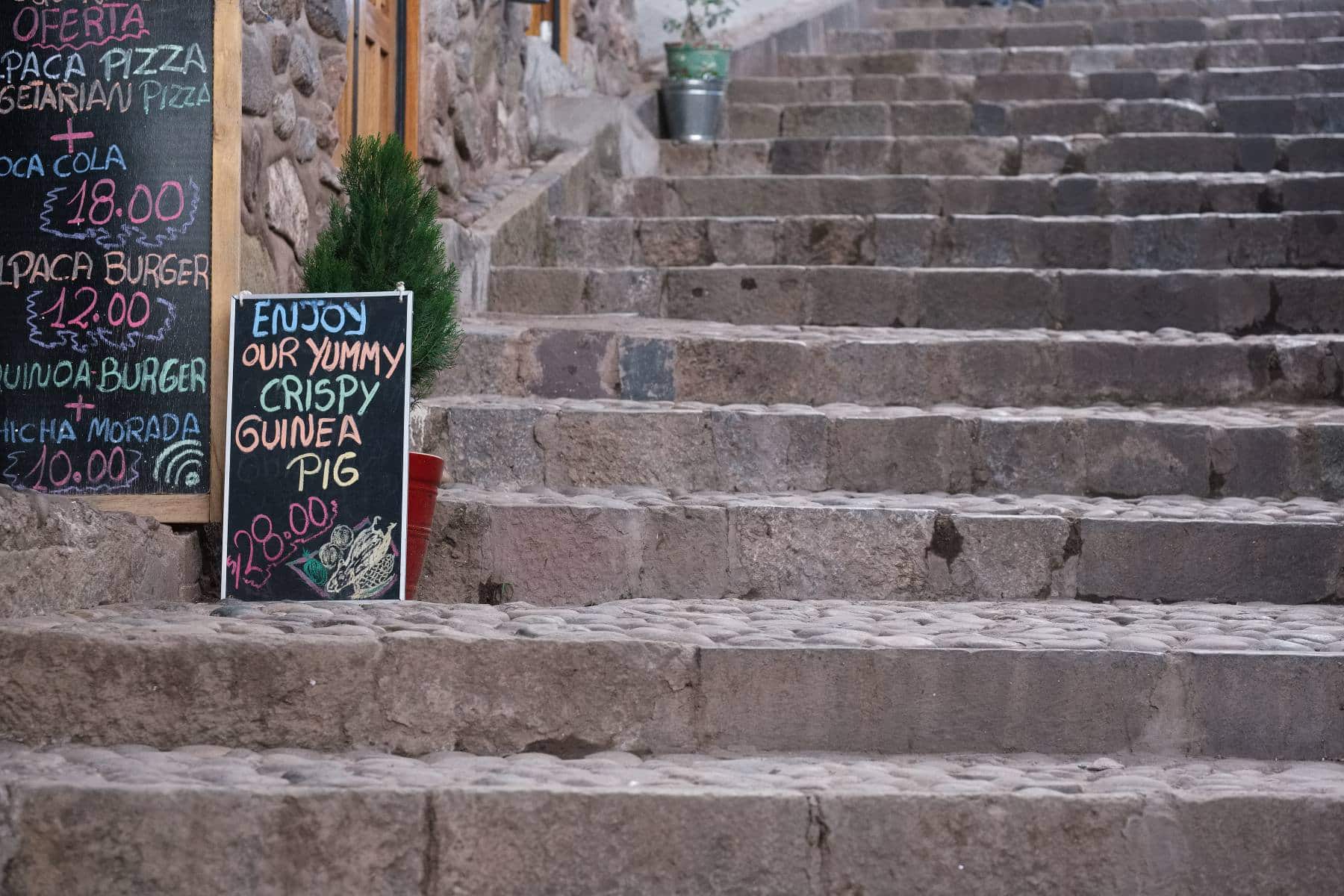 Indeed. A picture for documentary purposes..  it’s not something I would really go out of my way to eat. I had veggie enchiladas this evening, taking advantage of the wide variety of grub on offer. It makes a nice change from the usual “chicken bits soup” and “scrap of something with rice” that seems to be the standard fare in the mountain villages.

8 thoughts on “Bits and bobs, and other stuff”