hehe, I think I may have stacked up some bad backpacker karma with my comments below about the generic backpacker… the night before I left Cafayate the place I stayed filled up with new folk and was no longer quite so “muy tranquilo” as when I arrived…  was like sleeping with a bunch of asthmatic horses.. mind you they were probably equally as suspicious of the skinny idiot with the strange tan lines and funny shoes… ;-) 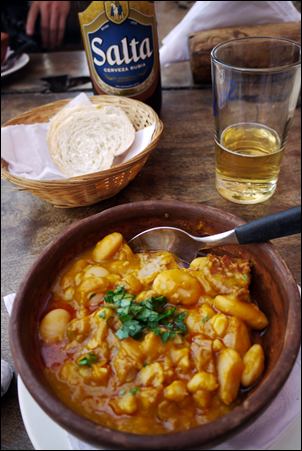 this is locro, a local stew of corn, beans and meat… not bad :-)

So it was with significant sleep debt that I rolled out of Cafayate on Monday morning having filled my panniers with good bread and my stomach with poor coffee. Whether or not I’ve had decent sleep I always feel crap when I get back on my bike after more than a day off  so the first 50km or so of riding were hard going with aching eyes and furrowed brow… it  may also have been something to do with the wind tunnel effect of the Quebrada de Cafayate (see here: http://en.wikipedia.org/wiki/Cafayate) .. this is the easier, surfaced route to Salta, I had planned to go via Cachi but in the end when decision time came I couldn’t be bothered being tired and all..  As for the wind.. well  I met a Dutch cyclist coming the other way, we chatted a while and I allowed myself a little mention of the wind and he said “ah yes, I had recently become aware of a little breeze pushing me along“…  :-)  A car also came past with an enormous cheer, luckily on a slightly downhill stretch so I could at least look fast.. hehe. It was the French guys I’d enjoyed talking to in Cafayate the day before :-) 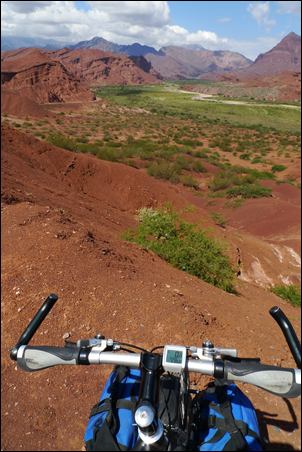 The quebrada itself is a very beautiful place, but from a cycling perspective no more beautiful than many other places. It enjoys special status as a tourist destination thanks to it’s proximity to Salta and Cafayate. Some of it’s sights are truly spectacular.. others are pushing it a bit in terms of turning a very average rock into a special ‘attraction’… 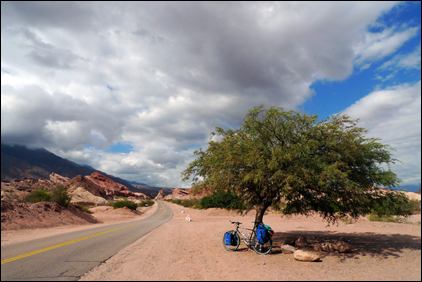 I ate cake under this tree.. but I was still slow after 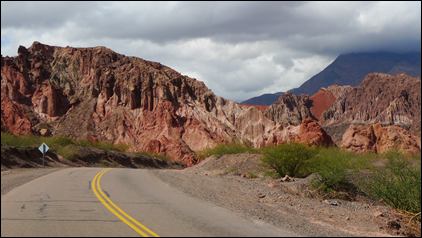 road through the quebrada 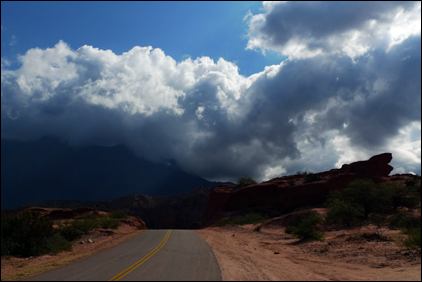 portent of wetter roads to come… 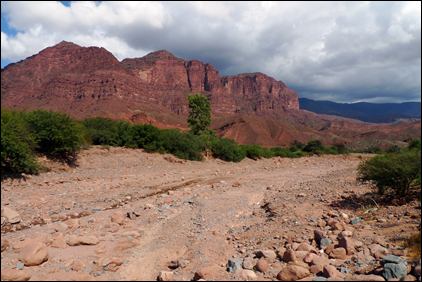 one of the last of the dry riverbeds.. 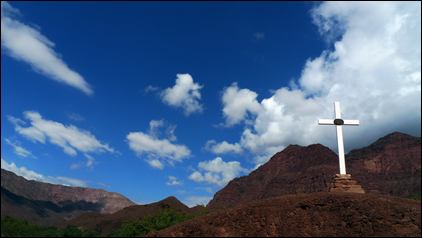 can’t think of a title beyond the obvious…

I only felt better after meeting a couple of excellent chaps from Buenos Aires making a cycle tour of the Salta region at a small cafe where I stopped for empanadas and water.. 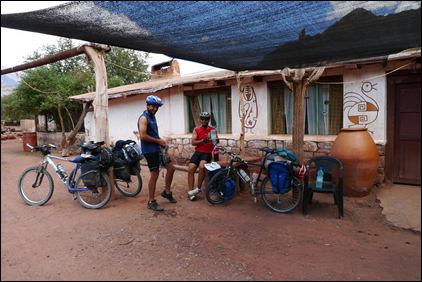 We talked about the usual things that cyclists will talk about… bikes, gear, weight, bike parts, food and women for example, not necessarily in that order. Further down the road I also bumped into 5 cyclists from Colombia heading south.. this was great, aside from being a bunch of total characters it was nice to be able to say that I had cycled in their country two years ago and that in my opinion “Colombia es el mejor país“… (Argentina también para mis amigos Argentinos ;-) I enjoy the on-road encounters very much, it is very much like being part of a global collective and always a reminder that no matter how cool I might think I am  (I don’t really…. much, ahem) there are always folk out there on bicycles that are much cooler… see the photo below and judge for yourself, I must get a flag on a  stick and an embroidered bag for my handlebars. 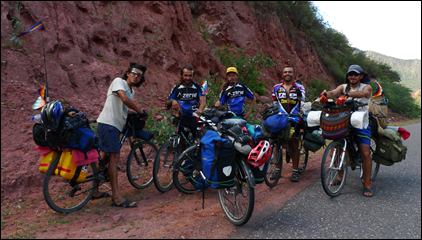 all the way from Colombia

These chaps were from Armenia in the Zona Cafateria part of Colombia. I always liked the idea of naming part of a country for it’s produce. 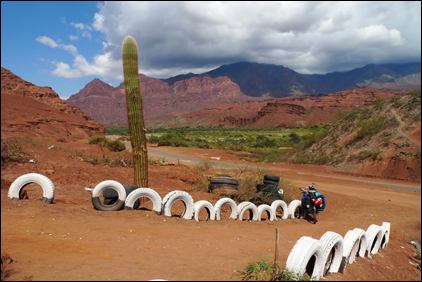 another road side shrine and a phallic cactus…

But I digress… back to the ride out of Cafayate… This day was very much one of transitions.  In particular my transition out of the desert… after weeks in a harsh, waterless environment the transition to a lush, sub-tropical zone was a matter of just a few kilometres as I headed north  east from the quebrada.. the change was remarkable as dust and rock was replaced by thick, green undergrowth, fields of tobacco and stands of palm trees. The the air became thick with humidty and my jersey perpetually heavy with sweat. The locals I spoke with also no longer talked of summer and winter, or the hot and cold seasons as they did further south… now they talked of the wet and the dry. 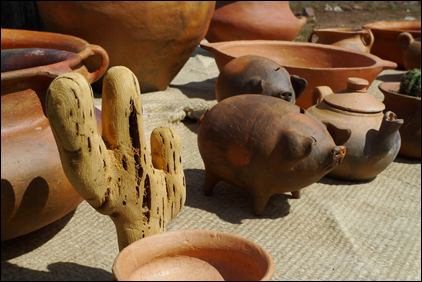 I also briefly noticed, or thought I did, a transtion in my Spanish proficiency from doing ‘just OK’ to finally getting to grips properly with the all the tenses and conjugations.. that was based on a long and happy conversation with a lady I bought cake from just outside the village of La Viña… and even later on managing to keep up with another Argentine chap and his Colombian girlfriend.. but this morning I was spoken to by a teenage chap with a thick head (I mean my thick head, I don’t know how he was feeling) and buggered if I could make head or tail of what he was saying.. so confidence dented somewhat there… but on reflection I can barely understand the average teenager back home anyway…. 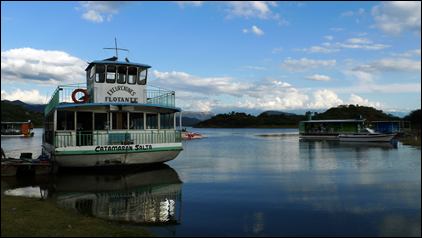 I stopped after 135km for the day on the pretty-but-sadly-spoiled-by-litter lake-shore near the pueblo of Coronel Moldes. Pitched my tent on the grass there for the princely sum of 5 pesos and promptly collapsed in a  heap. There had been a lot of climbing into wind in the form of cruel false flats that suck the life out of your legs, I’d been on the road for 8hrs though only 6.5hrs of that was actual riding. The Argentine guys showed up about 2hrs later and we had a pleasant evening involving just a small amount of beer, I think because we may have been too tired to walk more than once the 50 yards or so to the scruffy little kiosko by the lake, and a large amount of mickey-taking out of the single ciclista Inglés… I was outnumbered :-) 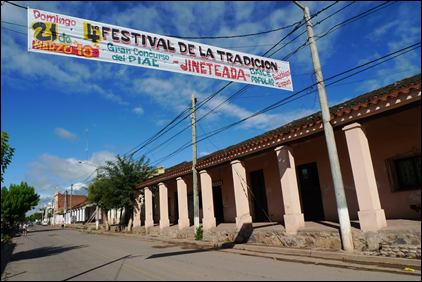 That I was now in a damp part of the country was reinforced by the torrential overnight rain.. at first it was just very hot and humid in my tent as I tried to decide whether I would prefer a cool night outside with mosquitos or steamy night in without… the decision was made for me when the heavens opened and I sealed my tent down hard. It hammered all night, I must admit I enjoyed it – my tent is tiny but it very weatherproof and it also washed away the last traces of a faint aroma of canine pee the fly-sheet had acquired overnight back in Santa Maria….

The rain stopped about 8am, just in time to brew a large pot of coffee and sort out breakfast. With only 65km or so to Salta the morning was characterised by significant faffing with wet gear before I said my farewells and rolled back up the hill to the main road at 10am. 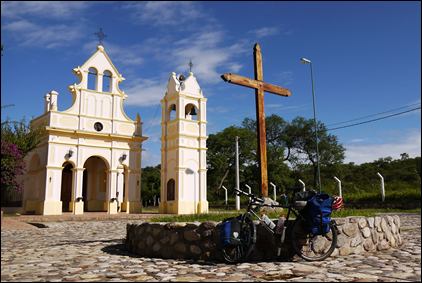 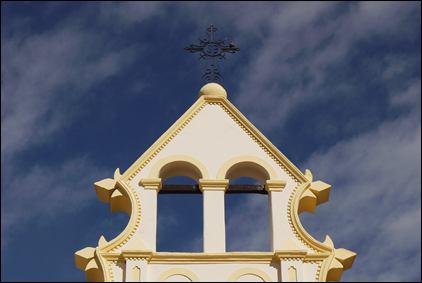 I hadn’t appreciated just how much rain fell overnight… until I came to the first flood.. the water rushing across the road was deep enough to cover my hubs.. I charged through the 100 metre flood, feet underwater and with an impressive bow-wave from my front panniers hoping that I wouldn’t come across any significant potholes hidden by the muddy red water… I didn’t find any though I was completely swamped a number of times by trucks pushing through in the opposite direction… perversely once I was soaked I found this all rather good fun. It was a scene repeated 7 or 8 times on the way into Salta… which is where I am now. 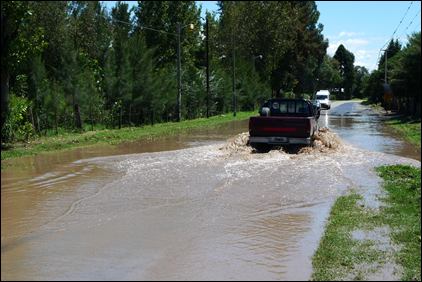 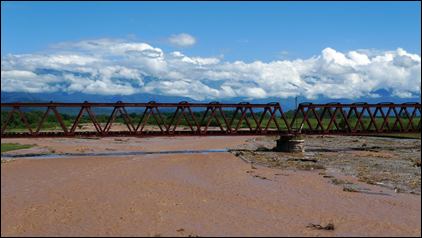 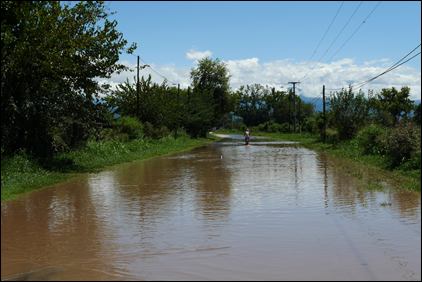 Tomorrow is going to be bike cleaning and servicing day… I also need to find someone who can repair my cycling shoes… the outsole is detaching from the carbon sole plate and they’re in generally tatty condition… once I’ve got my chores out the way and am happy my bike and gear are ready for the next leg then I’ll go and enjoy Salta… if the city is as good as the beer that bears it’s name then I think I’l be very happy :-)