Despite my words of a couple of days ago I do have reason to remember Santiago… not because I have come down with a dose of bronchitis, no doubt contracted courtesy of Iberia recycled cabin air but rather because of the fantastic hospitality shown me by my hosts yesterday as I was invited to share in a lazy afternoon of fried fish and beer before giving me a ride to the bus station with my boxed bike to catch the overnight bus to Villarrica. Thanks guys :-) 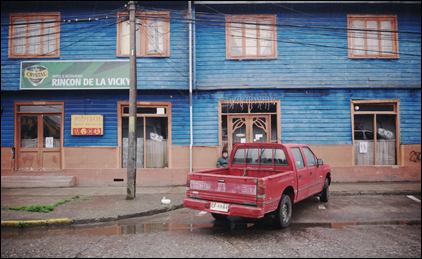 So I have time to write but not much to write about while in the grip of the lurgy… no riding for me for a day or two which rather sucks. It is pissing with rain down here today and rather cooler than Santiago which makes sense given I’m something like 800km further south. There is a big smoking volcano towering over the town.. it is hiding in the clouds today but I saw it back in January from across the border in Argentina, that day cycling up to Lago Alumine. Villarrica itself is an OK place, a gently delapidated town of faded pastels on the shore of one of the numerous lakes in the region. Being Sunday it has an especially mellow, almost melancholy air to it with the few folk out and about huddled down into their collars against the rain and the faint sound of hymns wafting up from the church on the lake shore.