Some cities have a character that I pick up on instantly, other cities have a character that takes a day or two to become apparent… and some just fail to make an impression. Mendoza was in that latter category and so it seems is Santiago. That is not to say they are not nice places they just failed to strike a chord within me. Santiago is pleasant enough but really is just a big city with all that entails … like heavy traffic. There are few nice old colonial buildings around but it lacks a defining character.. well, during daylight hours at least, later I shall investigate the night-time  scene.. ;-) Still, as a place to get my shit together and rest up after the flight from the UK it’s fine and it really did deserve a look. I found a bed and some new friends for a couple of nights at a terrific little hostel near the university. 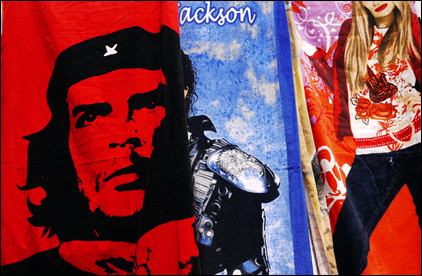 I wonder what Che would have thought.. mild amusement perhaps at seeing his face, next to Michael Jackson, on a beachtowel at the market..

The journey over here was OK..ish, I escaped Cornwall just in time before much of the county was shut down by floods. It seems a world away now as I sit here in 26 degs and sunshine. The only hiccup was an indicated engine fault on the Airbus A340 out of Madrid so we had to return for an investigation. Happily it turned out to be an instrumentation fault but I could have done without the extra couple of hours wedged in that seat on what is already a very long overnight flight. I am feeling somewhat buggered as I write. One very cool thing did happen on the flight and that was on the approach to Santiago over the high Andes in Argentina just north of Aconcagua.. we passed right overhead the little pueblo of Barreal and the dirt track Mark and I rode north from Uspallata to get there. On the ground it was a pretty brutal day, from the air the terrain looked simply epic. That original post is here.
My bike made it over here in one piece too.. the Nomad is so tough that I am starting to think of it as immune to baggage handlers.. which of course is tempting fate so naturally I do not think that at all. I built it up this morning figuring that if anything was bust then Santiago would be the best place to fix it. As it happened although the box was somewhat crushed my bike was fine… except for the pedals. Nothing to do with the flight but when packing it up in the UK I typically paid attention to every component except the pedals.. just tossed them in the box without a second thought. Very dim of me. The bearings on the right hand pedal were feeling pretty ropey with some play present. Bit of a pain but rather than hope for the best this afternoon became a mission to find a bike shop with SPD pedals. Successfully I might add, there is a whole string of bike shops along Avenida San Diego a few blocks south of the University of Chile.. which of course will be of no interest to anyone reading this unless you’re stuck here and in need of a bike shop. ;-)

I’m getting out of here tomorrow night, the bike has to go back in it’s box.. typically the more developed a country is the harder it gets to take a bike on public transport.. Ecuador, Bolivia, India etc – no problem but here I’ve been advised it’ll only go on the bus in it’s box. You see I have no desire to waste time cycling out of the city, instead I decided I’m taking the bus a few hours south to Villarrica on northern edge of  the lake district where it gets really interesting with, unsurprisingly, lakes and volcanoes in abundance. Ideal surroundings for easing myself back into the touring routine :-) 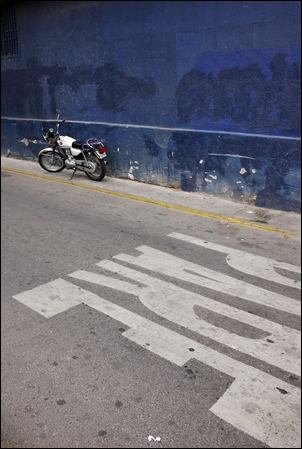 p.s Iberias charges for the bike were sort of reasonable. Most airlines charge these days so 50 euros for a trip halfway round the world was not unexpected. Although it still bugs me that me plus all my gear and my bike is still lighter than many of the ‘larger’ folk to be found wedged uncomfortably into a airplane seat… and that is ignoring their typical  mountain of wheeled suitcases. Arguing the case never seems to work. Oh well, beer calls ;-)