“And as he drove on, the rain clouds dragged down the sky after him for, though he did not know it, Rob McKenna was a Rain God. All he knew was that his working days were miserable and he had a succession of lousy holidays. All the clouds knew was that they loved him and wanted to be near him, to cherish him and water him.”

Rain. I always think of Rob McKenna and the Hitchhikers Guide to the Galaxy as I watch the spray coming from my front wheel.. however I am not miserable about rain as Rob was. There are many good things about riding in the rain like not needing to plaster ones-self in sunscreen and… umm…. well anyway, you don’t need sunscreen. 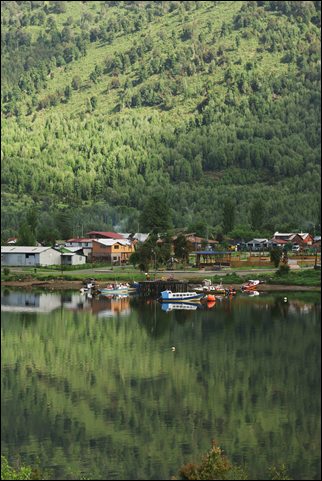 …”never known a night like it..” the weather was wild with gale-force southerly winds and torrential rain during my second evening in Puyuhuapi. Handily my camping pitch came with access to a friendly little house with a very yellow dining room where, for a dinner of meat and bean stew, I sat at a rough-hewn bench and watched a very 1970’s pair of crooners in wedding attire – bearded man in white suit, lady, sadly not bearded, in wedding dress – singing some awful routine on telly. All I could think was how nicely the generally blue shade of the TV screen contrasted with the rough yellow painted panelling of the room :-) It was a rough night, very pleased I brought my Mountain Equipment tent rather than the flyweight Force Ten. 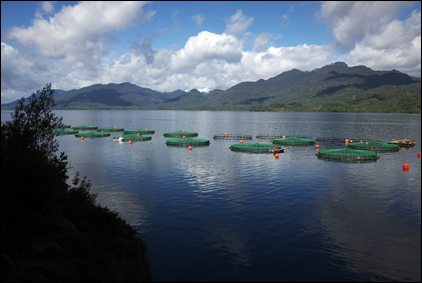 The storm blew itself out overnight and I pedalled out of town on a perfectly still morning. For about 30km the rough track wound its way along the shores of the fjord before heading up towards the climb of the day. It was one of those days when raingear is on and off all day… but mostly on. 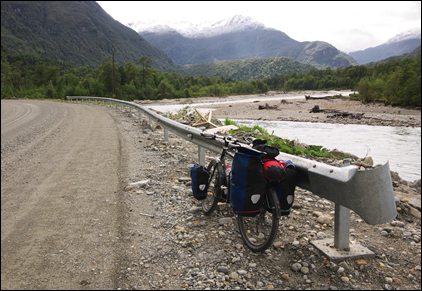 along the road somewhere

The climb to the pass itself was a very loose, rutted affair – quite hard going but quite beautiful as the track switchbacked it’s way upwards through the dripping rainforest, past waterfalls and all the time in view of hanging glaciers and snow covered peaks amongst the swirling clouds. 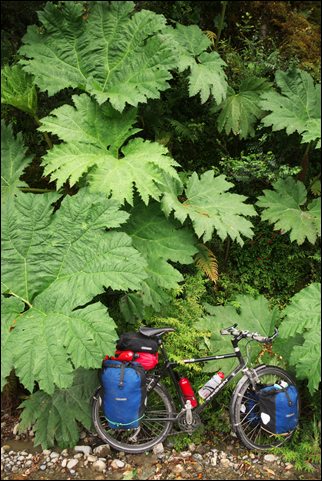 some of that giant rhubarby stuff. Edible I have been told... mmm, would it go with tuna and rice?

As I climbed the rain got heavier and eventually turned to wet snow, it was pretty miserable up on the pass itself.. icy cold, wet and windy. 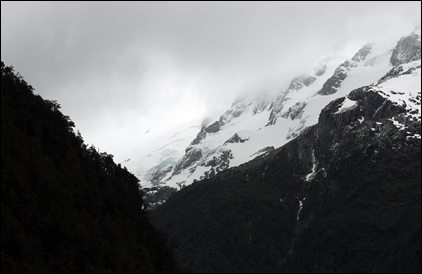 The descent was welcome, quite fun on a very steep, loose and rocky surface but sadly it didn’t escape the rain… which got heavier and heavier for a while before suddenly giving way to bright, blustery sunshine. The river valley in which I was riding which had been dark, cold and depressing was all of a sudden sparkling with greens, yellows and blues :-) 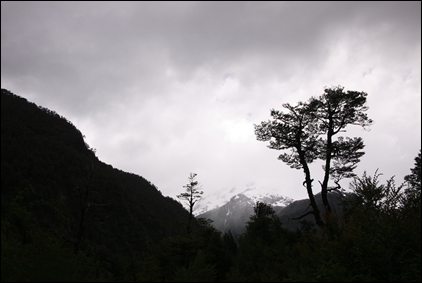 I’d met a German couple cycling in the rain, they were knackered and I was thinking of calling it a day after 90km anyway so I waited for them to catch up on a bridge near where I’d spotted some camping potential in the trees. There was a wicked little beach alongside the rather wild looking river that would have made a fantastically picturesque camping spot but being fully exposed to the strong winds and rain squalls it made sense to take to the shelter of the trees instead. The spot was on private land near a characterful old wooden house with chickens in the garden and a small vegetable plot.. no-one was home so, as it was raining again, we decided to pitch tents anyway and wait to see if anyone showed up. 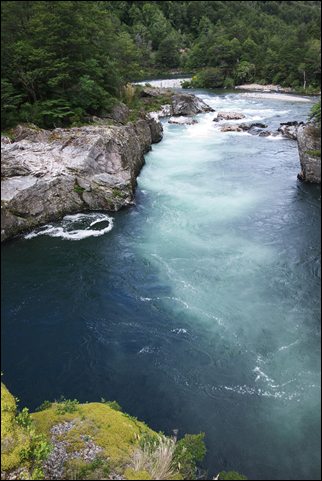 the rivers hereabouts are a wonderful shade of blue

We had just got a fire going to dry out socks and so on when an inscrutable old chap in  frayed tweed coat and flat cap turned up with a machete in one hand and an axe in the other… mmm, could not tell at all what he was thinking as I said hello… he muttered something incomprehensible and turned & stomped up to the house. “Ooops” I thought but 5 minutes later he came back with a wheelbarrow full of logs for our fire :-) 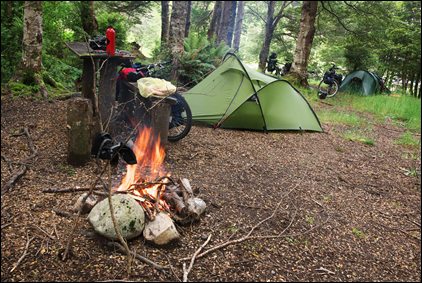 smoking socks for dinner... you know like explorers of old would eat their boot leather.. we have coolmax. sophistication.

Another wet night, it was still lashing down and only 2 or 3 degs C at breakfast. My new friends decided to have a pre-ride cigarette so I left them rolling damp papers as I pedalled off for the short climb up to the miniature little pueblo of Villa Amengual. Tried to buy bread there in the village shop.. but failed, bought chocolate biscuits instead. 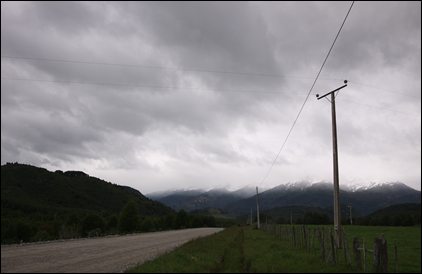 a particularly bleak stretch of carretera

Had already decided to do a short day of just 65km or so to the village of Manihuales leaving just another 80 or 90km or so to Coyhaique the following day. It rained the whole way but at least the wind was at my back much of the way. As I pedalled I watched snow moving in curtains across the peaks around me.. despite the cold in my feet and the rain it was quite atmospheric.. until one muddy stretch of about 30km of one of the most miserably awful bits of road I’ve seen outside of Bolivia.. with a couple of Argentine exceptions. That is not a complaint by the way, just a statement of fact.. muddy, gritty, rocky, heavily potholed and corrugated.. there was no respite.. but the final 20km into Manihuales turned out to be asphalted.. and with a generally downhill trend. Magic. Arrived in time for a late lunch of pork rib and potatoes at a cafe on the highway. 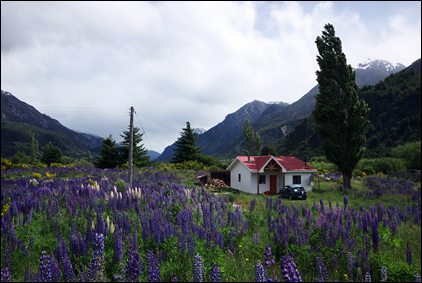 Manihuales itself is a small and friendly village running along the Carretera for about 500m. It felt special when I arrived… nestled among high mountain peaks with their attendant bad weather all around the village itself seemed to have its own little ray of sunshine bringing out the colours in the wildflowers. To the east and west the wall of the mountains with tops shrouded in swirling cloud and snow, to the north and south just the darkness of heavy weather. I took a room for the night, an opportunity to dry out a wet tent and get the damp out of everything else. 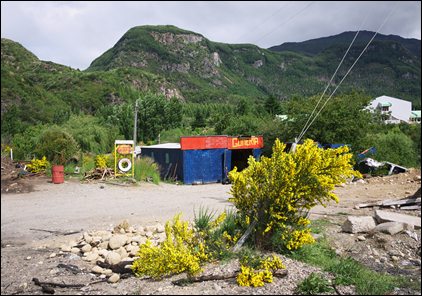 I stayed in a room with delightfully uneven and creaky wooden floors above a cafe where, when I wheeled my bike around the back, the man of the house was gutting the biggest salmon I have ever seen… twice the size of the wild salmon generally seen back in the UK. The fishing is good around here… 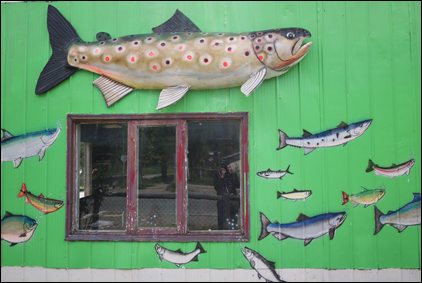 the owner of this place clearly likes his fish...

Leaving Manihuales after a slightly weird breakfast of coffee and a very pink but very tasty slab of cheesecake I had half an hour or so to enjoy the fantastic wildflowers in the river valley going south before the weather closed in. Again. 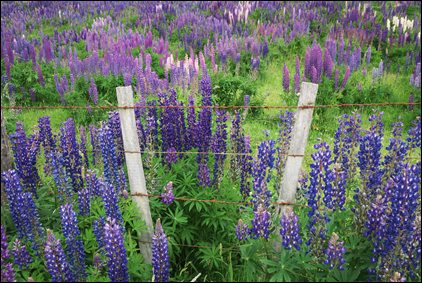 along the road south of Manihuales

It rained with a vengeance so as there was nothing to be seen through the heavy rain and mist I simply put my head down and caned it for Coyhaique.. made the 90 far from flat km in just over 4hrs, and arrived very wet and worn out. It had to be done, as much to keep warm as anything :-) 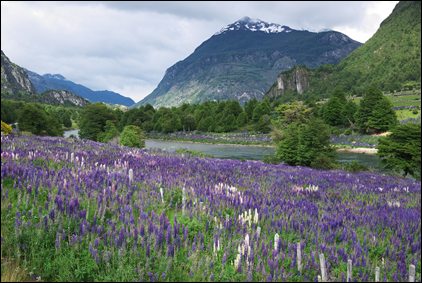 the valley just south of Manihuales

The wind today was from the southwest.. as always seems to be the case when the weather is bad… it makes sense, the cold and stormy southern ocean is down that way. When the weather is fine it comes from the north west. So as far as riding goes… today I had a cross-headwind but it makes little difference in reality, the valleys are so convoluted the wind bounces around all over the place so in one valley there’ll be an arse of a headwind but an hour later you can be racing along with a howling wind at your back. 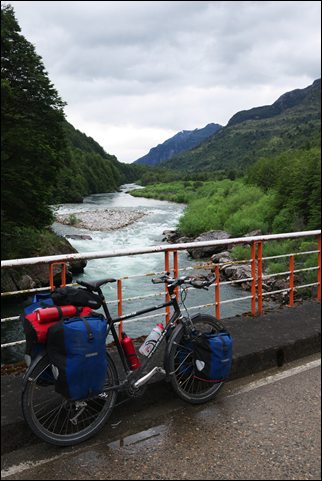 On the road to Coyhaique the only time the wind really mattered.. on the long climb that starts about 15km north of town, I had a tailwind. Most welcome.. I also fell into an area of apparent rainshadow – the peaks and valleys all around disappeared into misty darkness but for the duration of the climb I had hazy sunshine and was able to take raingear off for a while and dry out in the cold wind. 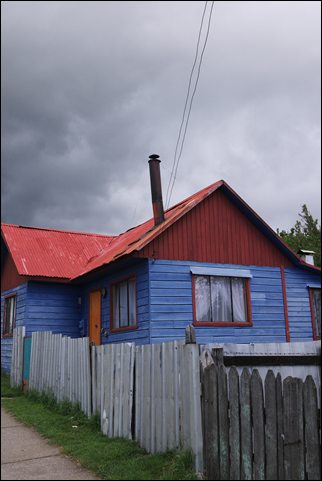 At first glance Coyhaique looks a pleasant little town. I will stop 3 nights or so… the constant rain and wind is not kind to eczema prone skin so I have some healing to do there, and I am looking fwd to a couple of days R&R. I found a very nice little hostel but sadly in this internet age with “backpackers” booking everything in advance should I wish to stay longer I will be kicked out after 3 nights regardless. Humph :-| 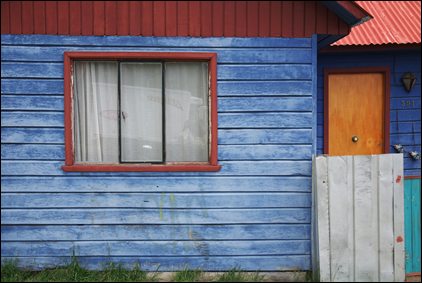 Oh, I just thought of some other good things about rain…particularly heavy rain. It washes days worth of muddy shite out of your cycling shoes and all the waterfalls cascading down the cliffs here are rather beautiful. There you go, always a silver lining :-)

I have also learned something about the Carretera Austral… when someone says to you “oh the forecast is for better weather tomorrow“.. ignore them. They are making it up.