I was hoping the girl in reception would offer me a free night in a 5-star suite for my trouble. She didn’t… must have been fully booked – I cannot imagine any other reason why she would not have wanted a somewhat scruffy but otherwise excellent quality cyclist to stay in her hotel. I thought my hint of “oh I am looking for somewhere to stay the night….. could you perhaps tell me where I can put my tent” might have made a difference but she just pointed at the map and said “oh you can camp down by the lake, it is about 5km…” 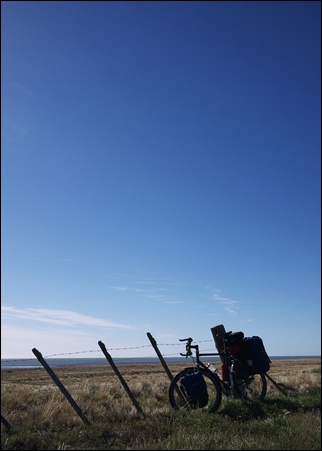 the last of the pampa.. the Atlantic visible in the distance

Hehe, you see I had met a couple of Dutch cyclists on the road out of Rio Grande that morning, they were three days into their 5 month journey north from Ushuaia and had forgotten to return their room key to the reception at the rather nice hosteria they had stayed at 2 nights earlier in Tolhuin… “could you take it back for us please” they said “we had ridden 50km before we realised we still had it“. So I took it down the road with me and delivered it the afternoon I arrived in Tolhuin. 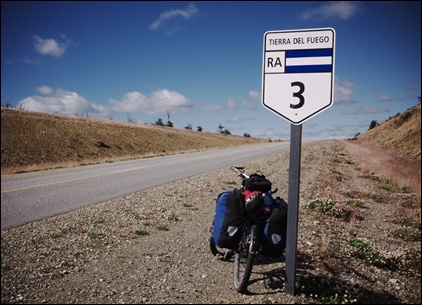 the romance of the open road. A hard but good life.

Much to the bemusement of the motorized visitors I had left Rio Grande with a big hug from Norma, the bubbly girl that runs Club Nautico. She was a star and I think, judging by her guestbook and photos adorning the walls loves cyclists…  I had felt a little bad for her the night before… in the evening a pair of Land Rovers showed up carrying two Welsh couples in their late fifties I guess. They had not been there for 10 minutes before they started complaining, clearly forgetting they were paying just £3/night for hot water, wifi and use of a kitchen… They had metre-square cartoon flavoured stickers on their vehicles that said “The World is Not Enough”. I hated them… ah, that’s too strong.. I disliked them intensely is probably more diplomatic. Used to cruising quietly through countries on my bike, engaging with people and places along the way I found the idea of ripping through in a cloud of dust in a vehicle effectively shouting “look at me” rather distasteful. I suppose it is true… I am just a bike snob. They could have been a little more friendly and easy going at Club Nautico though, I might have liked them then… ;-) 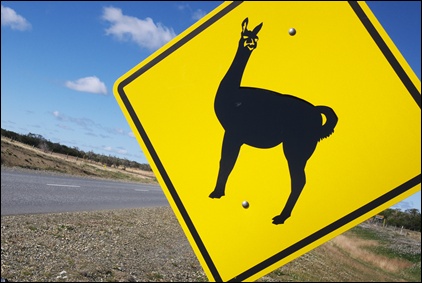 fine facial detail on this guanaco.. but you'd think if going to the trouble they'd have given him a nice smile ;-)

I felt good riding out of town. It was a bitterly cold morning but the sun was shining down from a clear blue sky and I knew that the day would be my last bit of pampa. The first 12km were into wind. They took me over an hour but after that I had at least 50km of cross-tailwind as I cruised south with the gleaming stripe of the Atlantic visible across the pampa to my left. 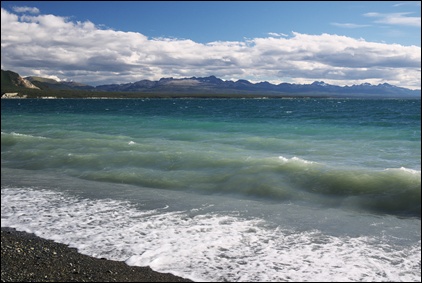 As the day wore on the empty pampa was replaced by a series of low hills covered with stunted trees and on the horizon the peaks of the mountains in the far south of Tierra del Fuego became visible. Hurrah! I ate lunch watching a pair of condors circling lazily over the road that shortly afterwards swung south west into wind approaching Tolhuin. That slowed things down considerably :-| 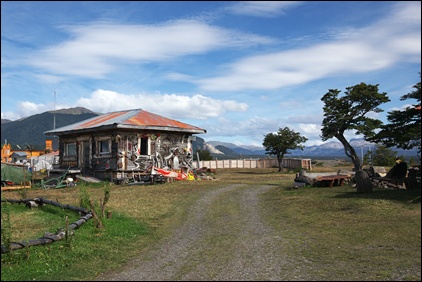 I left the highway and crunched along the dirt road into Tolhuin after 115km. It is not much of a village but it does have a famous bakery that is visited by all and sundry passing on Ruta 3. Having visited it I think it is only famous because it has become known as being famous… the reality is that is very much a regular bakery with a cafeteria attached. The cakes were OK but not spectacular…. The bakery also has a spot where cyclists can camp for free. I chose not to for the simple reason I was having trouble with eczema on my face and in my eyes and I wanted a shower to wash all the dirt and sunblock off. 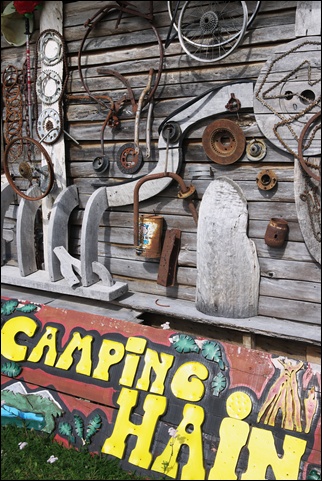 So having ridden a few more km on the aforementioned key quest it was with 125km under my wheels for the day that I rolled into the rather colourful & eccentric ‘Camp Hain’ on the shores of Lago Fagnano, at 98km long it is a significant stretch of water and being oriented east-west the persistent winds ensured a decent size surf on the pebble beach in the afternoons. The location was stunning with snowcapped mountains visible to the west. Stunningly windy too. Handily tent sites have wooden windbreaks.. all heavily bearded with the lichen that covers everything down here. 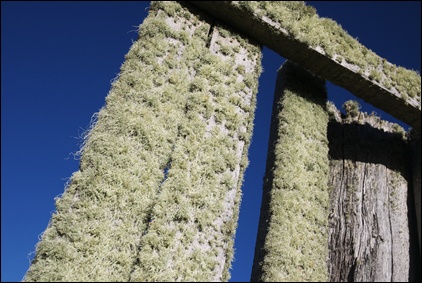 lichen covers everything down here.. dead and alive. Probably would not want to sit still for too long...!

The site itself is a rather eclectic mix of junk and history of travellers who have been coming this way for a number of years. A good place to spend a night, especially given the log cabin with big wood burning stove as a refuge from the biting wind :-) I rather enjoyed the ironic sign in the mouldering bathroom requesting that guests maintain order and cleanliness.. I wondered if that meant polishing the mushrooms growing up through the floor.. 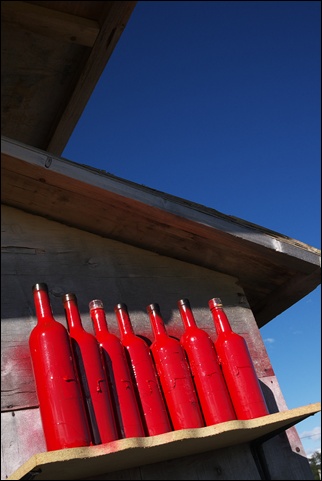 I stayed 2 nights there, partly to give my skin a chance to settle down again and partly because it was just such a mellow place to hang out. I met a very pleasant young English chap there, Joe. Very unassuming and with excellent conversation he was walking from Ushuaia to Uruguay, a journey of some 4000km.. “just something I wanted to do” he said as we chatted over coffee by the fire. No publicity, no website .. just out there doing something cool. That night we made a big fire and grilled some slabs of beef for dinner :-). 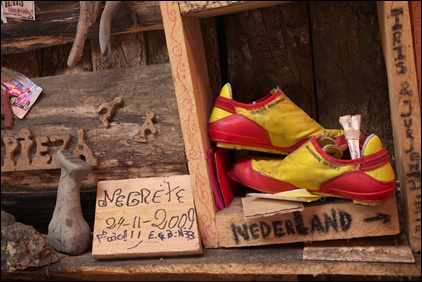 not sure why you would leave your shoes... something of a fundamental bit of kit, I need mine. Instead considered leaving some sacred underpants... you know, 'holey' ones.. <sorry..> 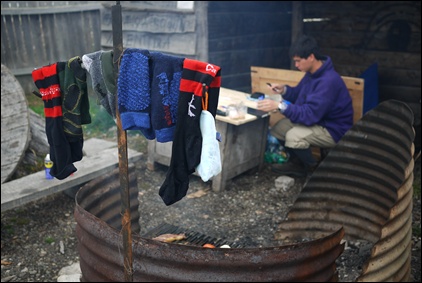 Joe gets into the swing of life as an adventurer by smoking his socks for dinner...

For my final day on the road I was up early. At 6am there was not a breath of wind. “Hurrah” I thought, as the road to Ushuaia heads directly into the prevailing winds. By 7am however I could hear a faint and ghostly whine although could feel nothing… the wind arrived shortly after, by the time I rolled out at 8am the lake was covered with white caps and the surf was building once again. 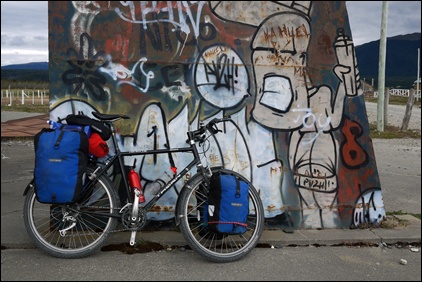 just south of Tolhuin there is an old observatory rusting away..

The first 48km were something of a grind into the wind but then the road arrived at the foot of the final Andean pass.. Paso Garibaldi. Not high at just 400m, still above the treeline, but a wonderful climb with nice views of about 8km on a good road and a nice gradient. It felt good to get into a good climbing rhythm again. Beyond the pass I was very much back in mountainous terrain.. I had missed the mountains while out on the pampa. 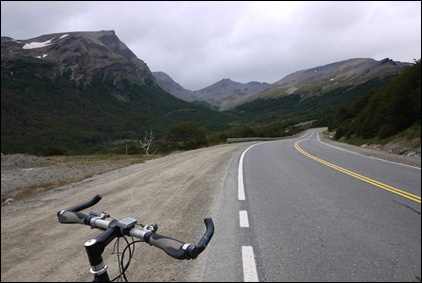 one final mountain to climb... Paso Garibaldi. Why you would name a mountain after those tasty biscuits with currants in is beyond me, you can't even buy them here...

After 100km and with just a few km to go into Ushuaia I met an Argentian chap heading north on his bike. He did not look as if he was just setting out, too ‘well worn’.. “no, I have come from Alaska” he said, “but now I cycle home. It is only another 3000km to Buenos Aires“. Excellent stuff. I had been hearing about this “Argentine guy with 50kg of gear and junk all over his bike” ever since the Carretera.. It was him. True, he was carrying a lot of what some folk would class as junk but I cannot judge another cyclist, suffice to say his bike looked well “lived in” :-) 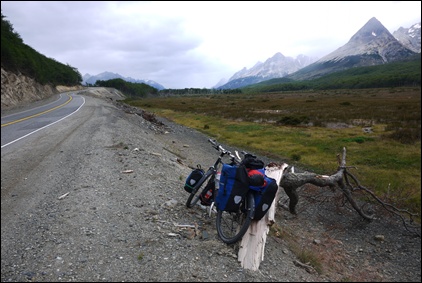 So, Ushuaia. The end of the road for me. The road itself goes a couple more km south-west before running out, and the locals happily charge you $15 to get there, but Ushuaia is the southernmost city in the world. South of here there are a few islands, ending with Cape Horn, itself just a storm-blasted little island.. and beyond that nothing until Antarctica. I am camped at the foot of a ski hill above the city. Nina whom I met on the Carretera was there so on my arrival in a heavy rainstorm I had a ready made drinking partner with which to retreat to a warm bar :-) 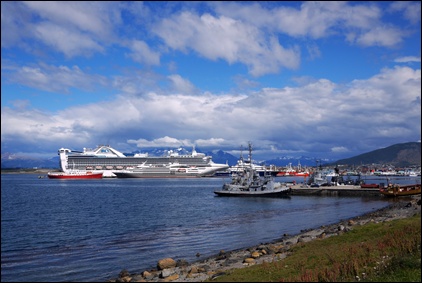 from the road into Ushuaia... scruffy tugs, a few black fast patrol boats belonging to the Argentine Navy and cruise ships..

Ushuaia at first glance is a nice city. Very heavily touristed for both the location itself and as a jumping off point for Antarctica, but in a way that is not brash or in your face. A good place to end a journey. The location is stunning with snowcapped peaks around, a nice waterfront where ancient wooden boats mix it with cruise ships and superyachts. The town is blessed with great cafes and bars and the locally brewed beer, Cape Horn, is very good. I know what I shall be doing as I rest my legs over the next few days ;-) 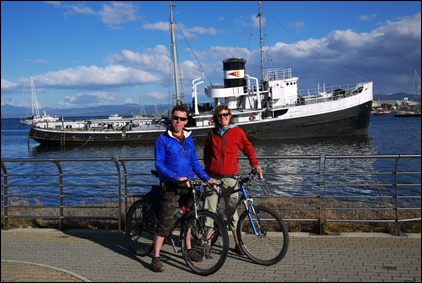 As always at the end of an adventure I feel quite flat and miss the idea of being able to just move on again. I thought about heading to Brazil but I’m tired, a lot of my gear is knackered so I figure best go home, make repairs and ponder what the future holds for me.. both in terms of where to head next and also earning some sort of a living…. For the next few days however I can enjoy this place and get all misty-eyed about the Andes… finally put to rest from Colombia in the north to this, the very southern tip :-) Favourite places… Southern Colombia, Southwest Bolivia, Northern Argentina and the wonderful Carretera Austral… it’s all good however, even the bad bits simply because of all the terrific people I met along the way… if if you’re reading this and you met me then that means you :-) 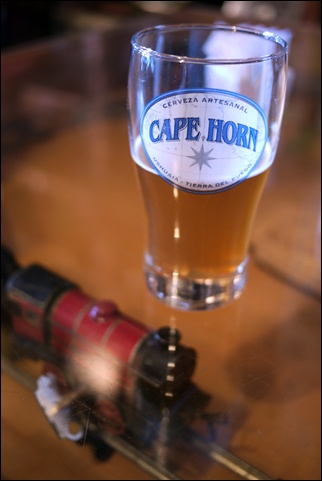 the local brew in a rather cool bar-cum-museum, hence the vintage clockwork model railway 'in' the bar.

Don’t hang up just yet though, I sense much photographic opportunity here in Ushuaia.. and I have a few days in Buenos Aires before heading home… where the usual kayaking, cycling and related fun will continue. In the meantime however I hope you enjoyed coming along for the ride ;-)

p.s. this post almost never happened. My netbook survived many 1000’s of km of ripio only to have me drop it last night after a few beers. Hmmm.  I lost all cursor control… happily it is just the trackpad that is bust, I picked up a mouse for a few $$ this morning and all is good. Phew :-)