It is only 140km from Afyon to Eskişehir but it is very much a journey that needs to be taken slowly over 2 days and savoured.. and it is worth a decent post here… it was a wonderful ride. There are plenty of reasons and opportunities to dawdle from enjoying the fine landscape of the Phygian Valley to the enormous rock carvings and cliff tombs left behind by the Phyrgians after whom the valley is named. The finest of these is at Midas Şehri and dates from something like 550BC… but I am getting ahead of myself.. 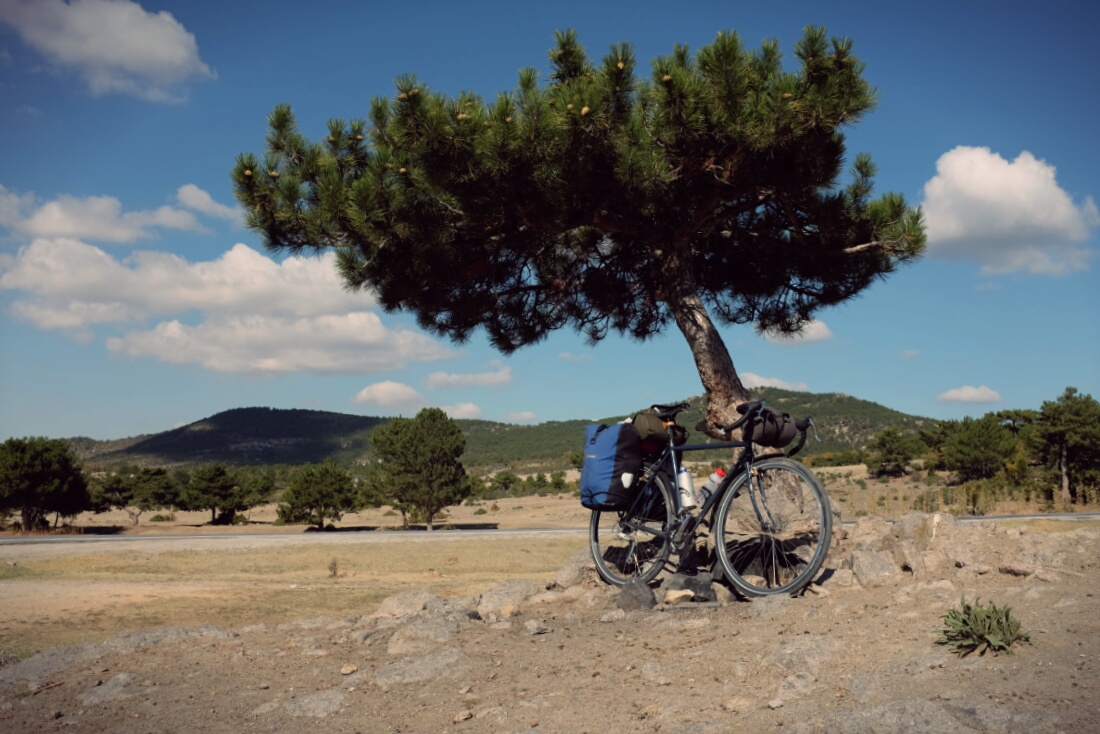 on the road out of Afyon, this one is going in my collection of cool trees worldwide :-)

I am not much of an urban creature so after just a day in Afyon I was looking forward to getting back out into the countryside. Leaving town the quiet road north is pretty flat and featureless for 20km or so but thereafter climbs into mountains thickly forested in fragrant pines and winds its way through rather wonderful scenery with ochre cliffs thrusting up from the carpet of pines and with many springs trickling down the mountainsides. 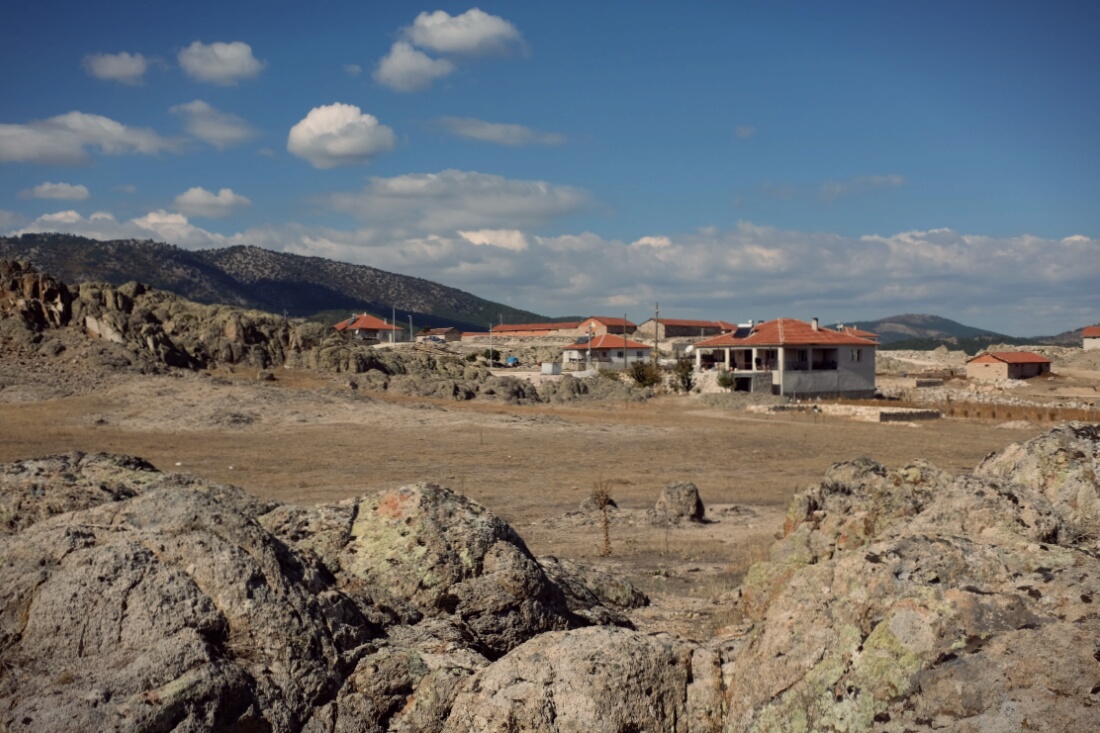 I’m in a bar (it is 10am and Abba is playing, it is ace) and forgot my map so can’t tell you what this village was called.. but it is where I was able to leave the asphalt

At 50km I was able to leave the asphalt and get onto a rather nice dirt track… but was mildly disappointed when the dirt turned to asphalt after just 6km or so.. albeit very quiet and very scenic asphalt. 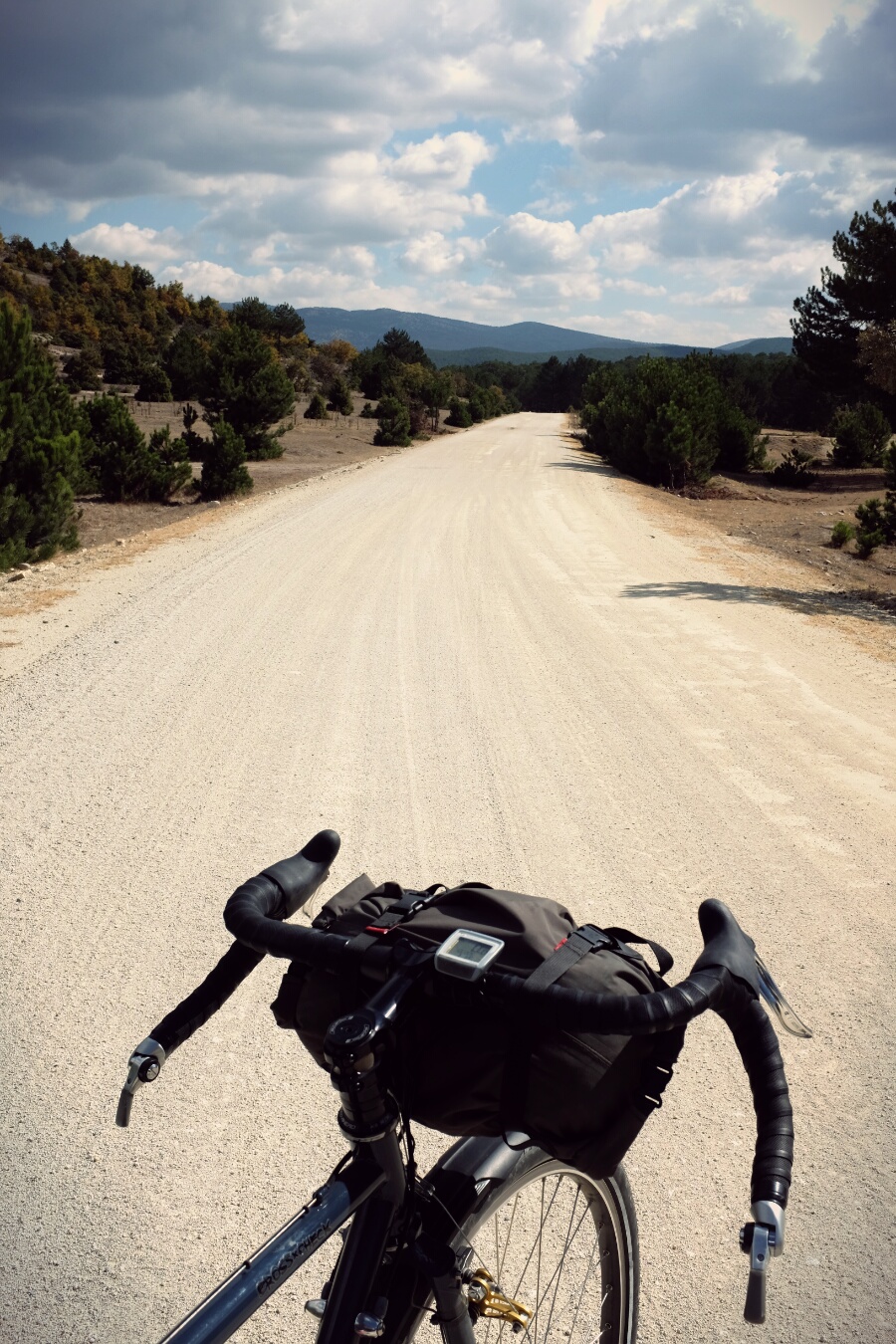 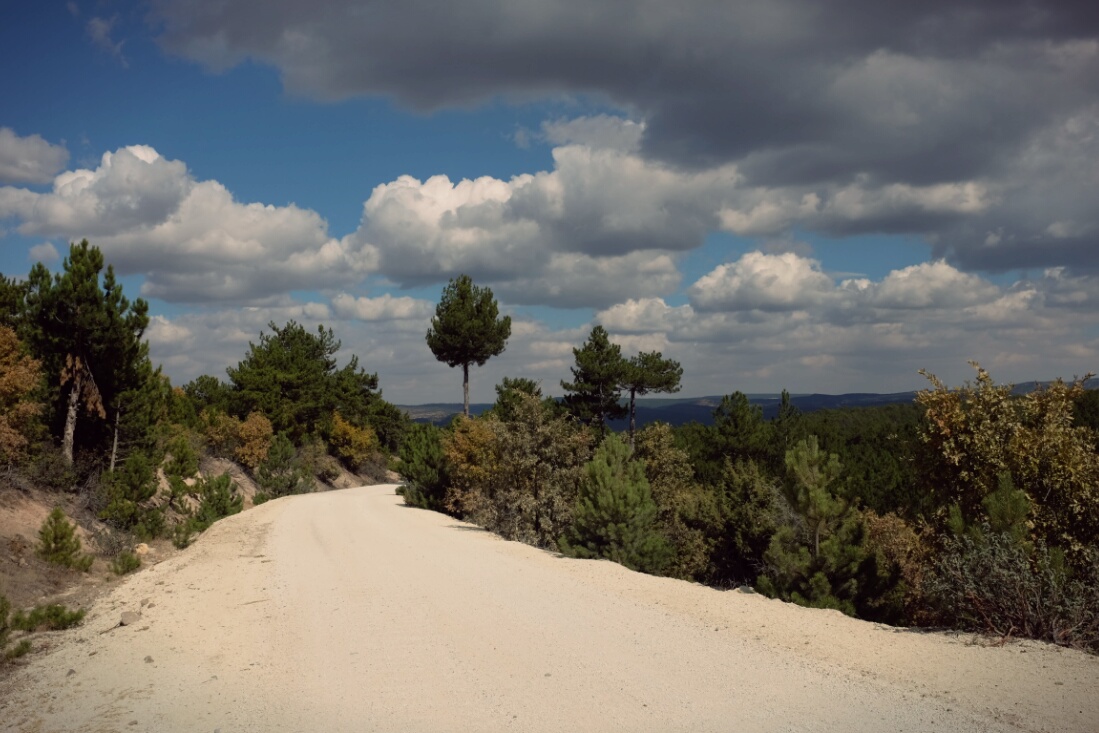 At Midas Şehri I met a local family having a picnic day out. I left my bike with them while I went and clambered alll over the undeniably impressive the rock carvings. They were keen for me to stay and join them for their picnic .. and I was sorely tempted but declined as I did still want to put a few more km in before looking for a spot to camp, so they gave me some apples instead! As it happens I only made it 200m further up the road to join a German couple touring by car that I had met up on the massif for tea in the neighbouring village… 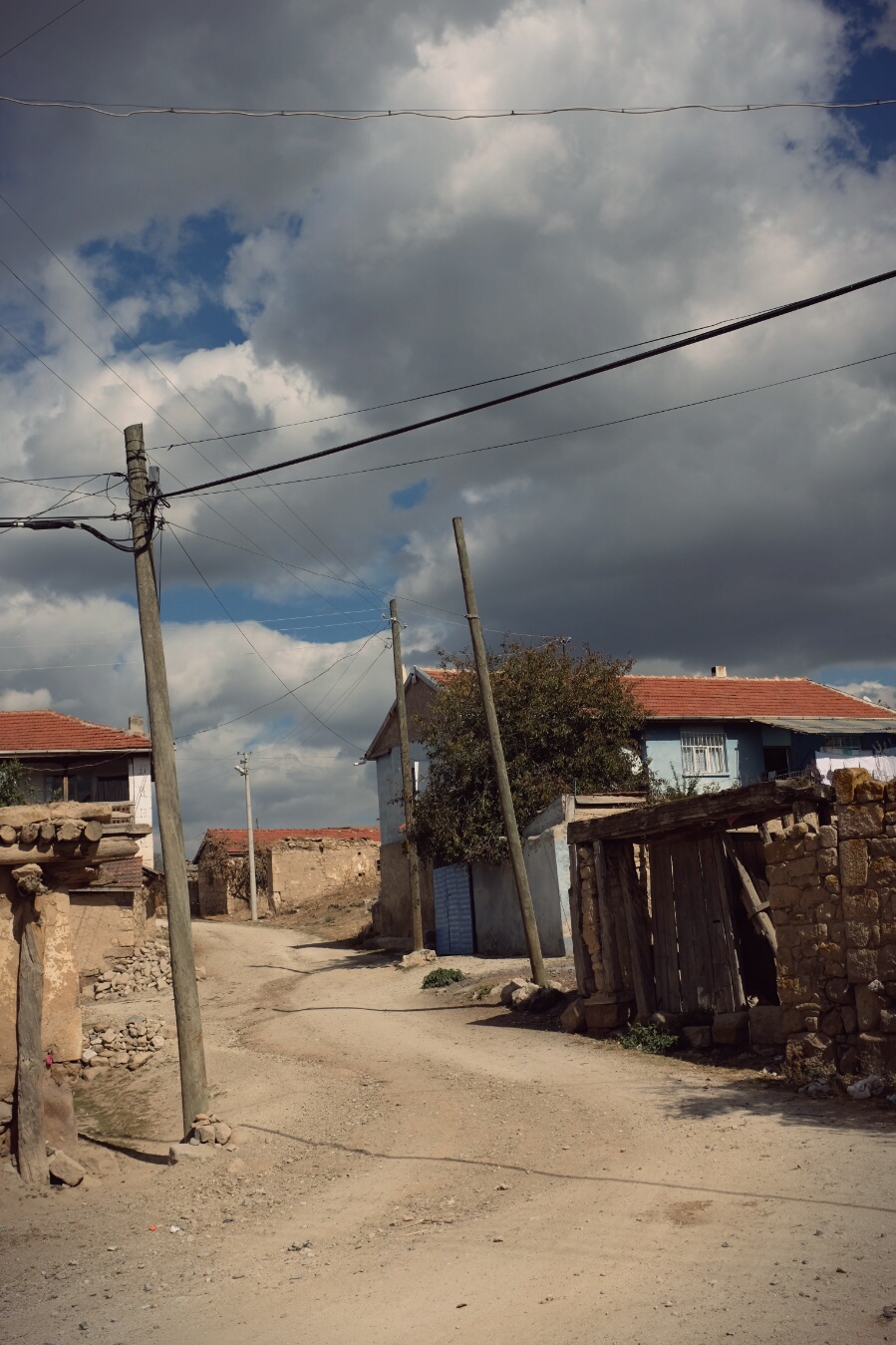 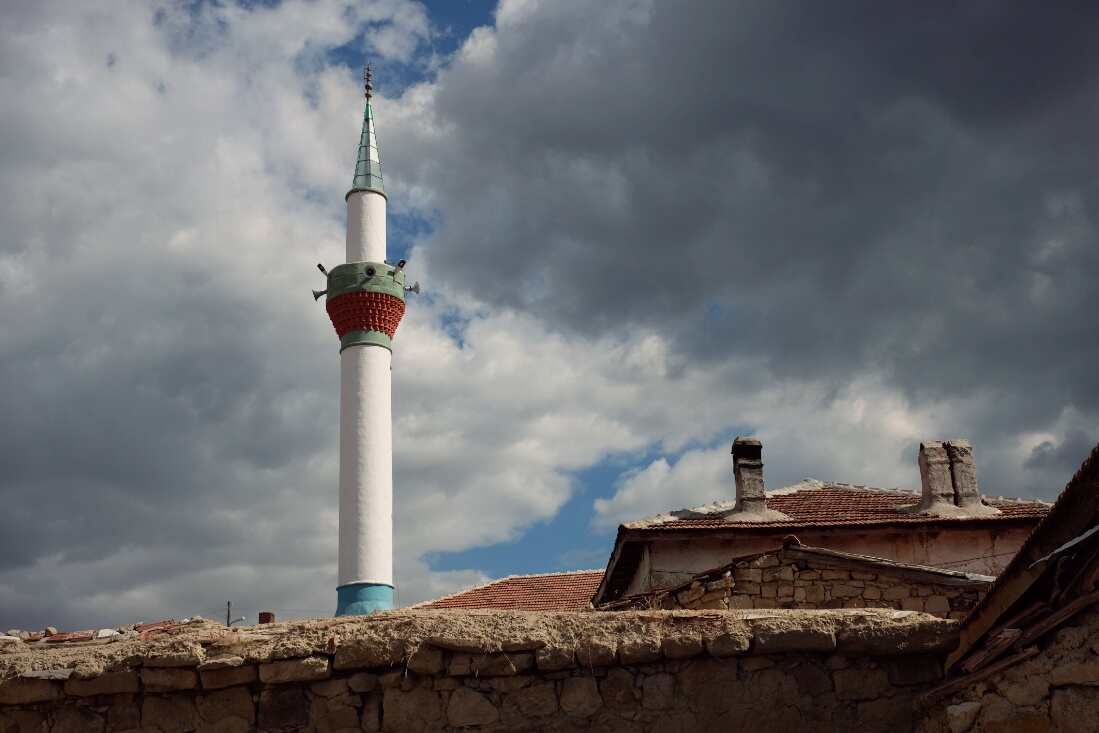 always with a beautifully maintained mosque 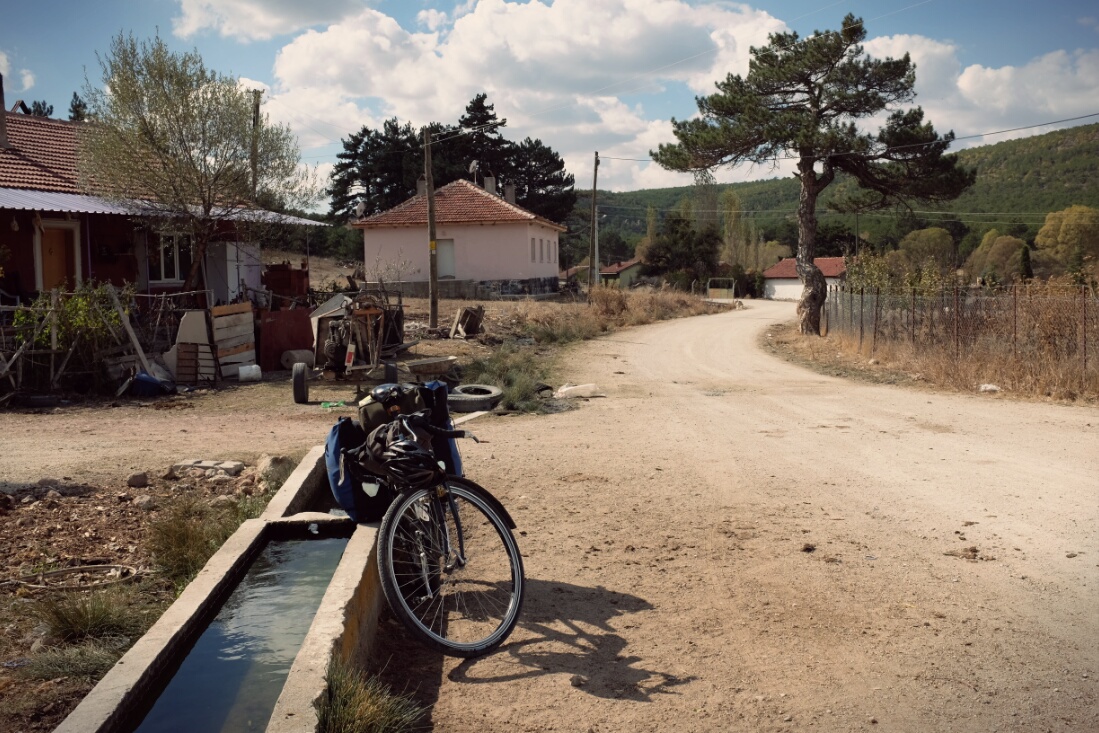 and a handy water supply. I sat here to eat lunch 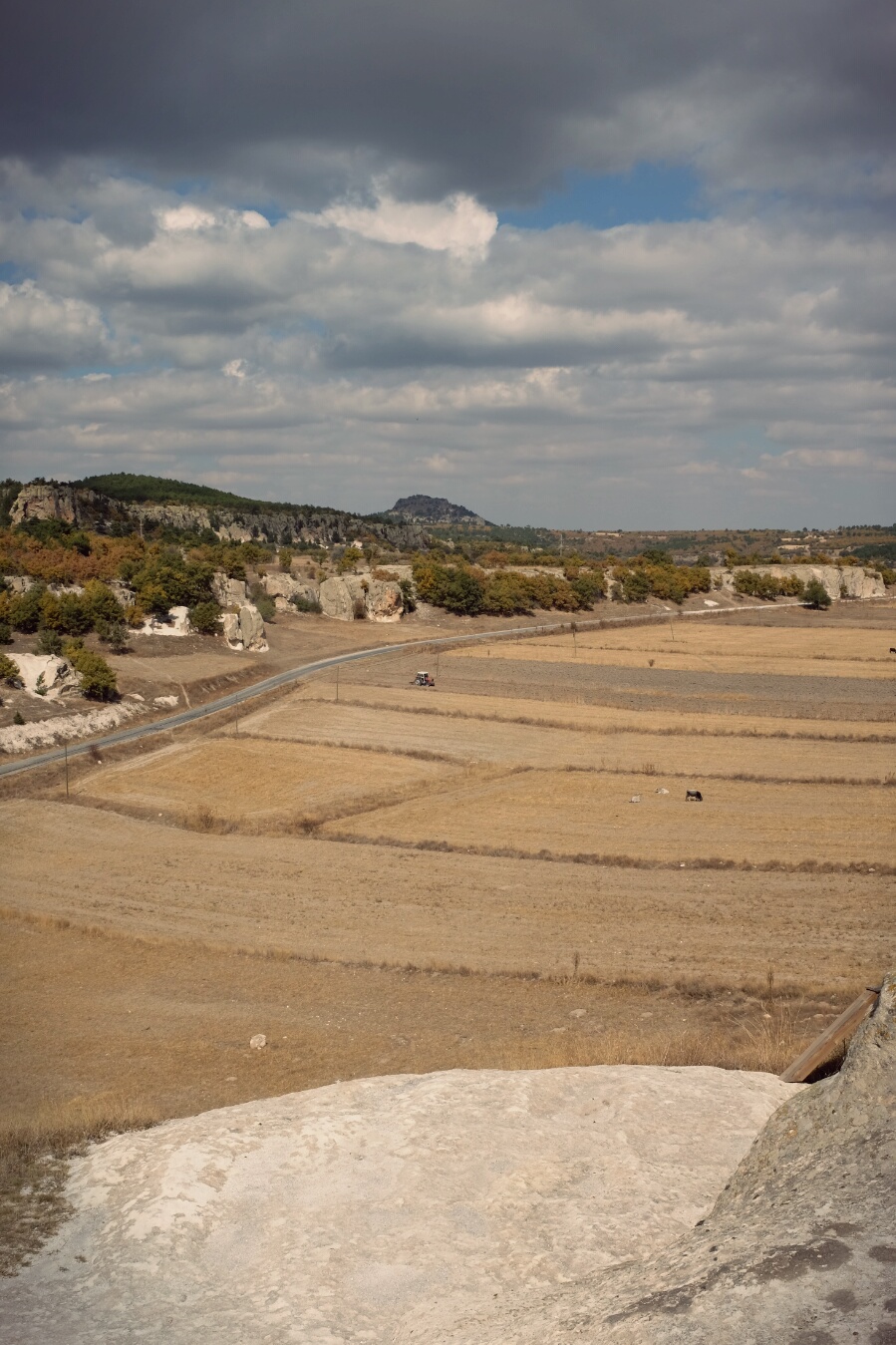 the valley at Midas Şehri 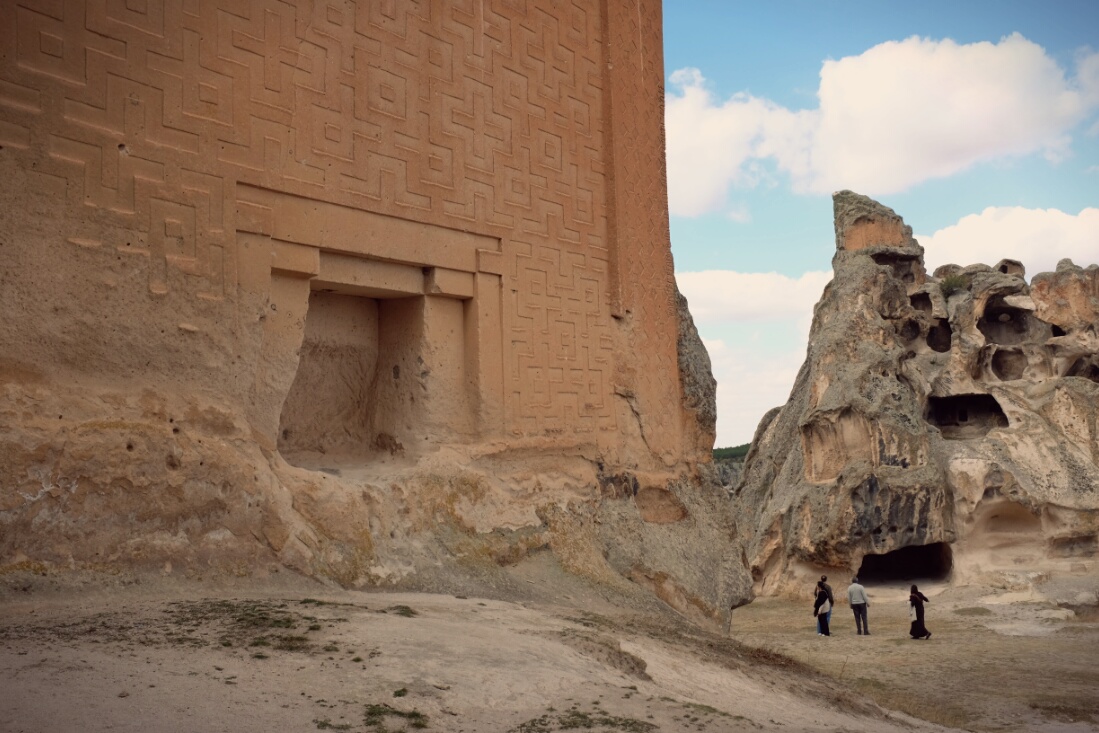 Midas Şehri.. sadly the cloud came up and stayed over the massif 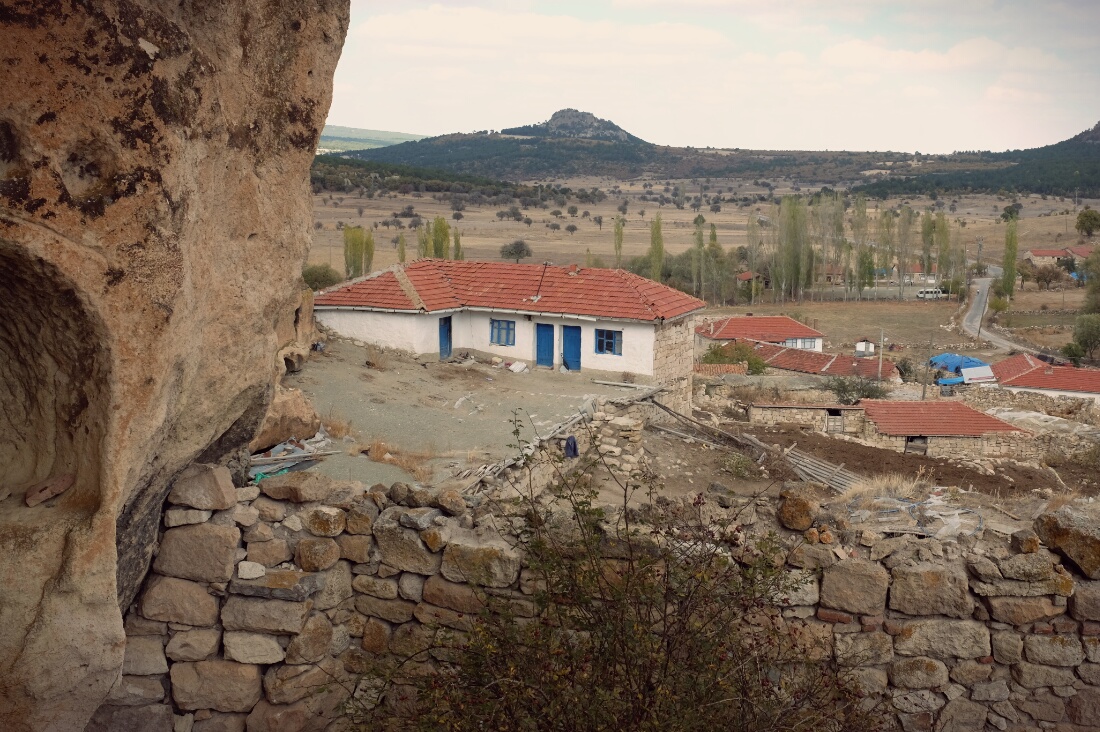 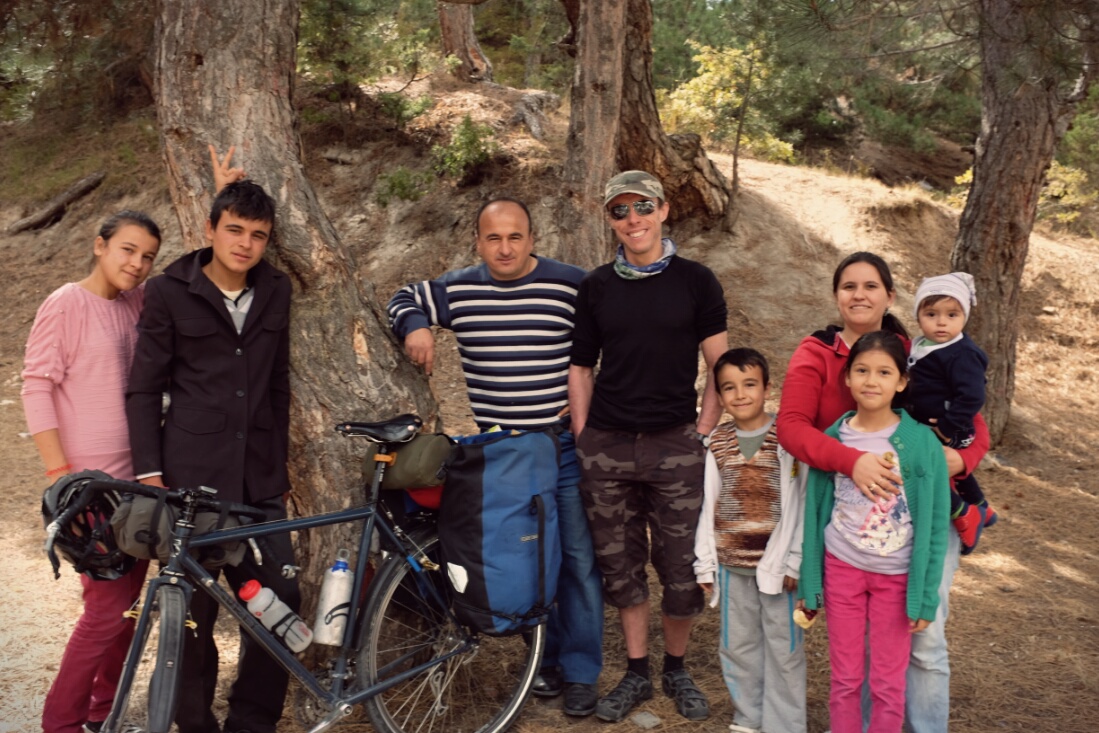 I’d figured on riding only about 80-90km for the day before looking for a camp spot.. and that’s exactly how it worked out… the road was at a high point (there had been a lot of climbing so I was at somewhere around 1500m) in the forest and I could see occasional glimpses of vast, empty plains below and to the north so when I spotted a clearing in the forest well off and below the road a few minutes of rocky downhill ‘off-piste’ brought me to a lovely camp spot. I’d filled my water bag at the previous village so was all set for the evening. I pitched my tent, made a brew and enjoyed the late afternoon sun while listening to the distant music of sheep bells in the mountains, and the occasional faint call of the muezzin from distant villages. 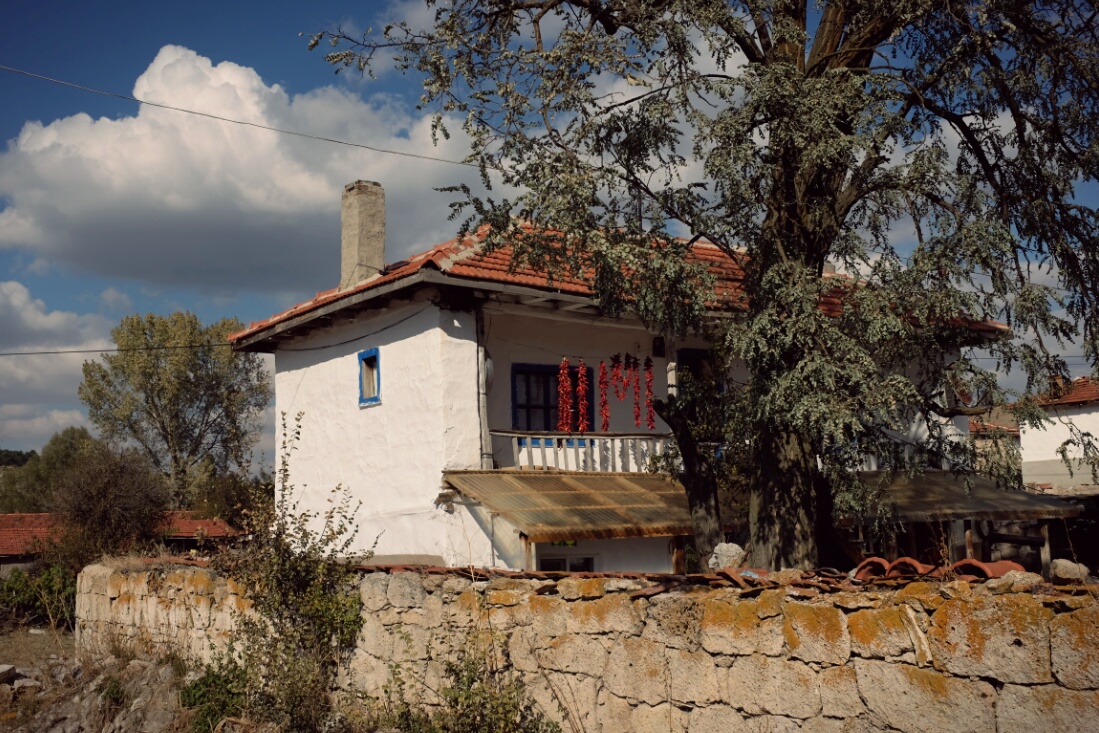 the red things are bundles of chillies drying in the sun 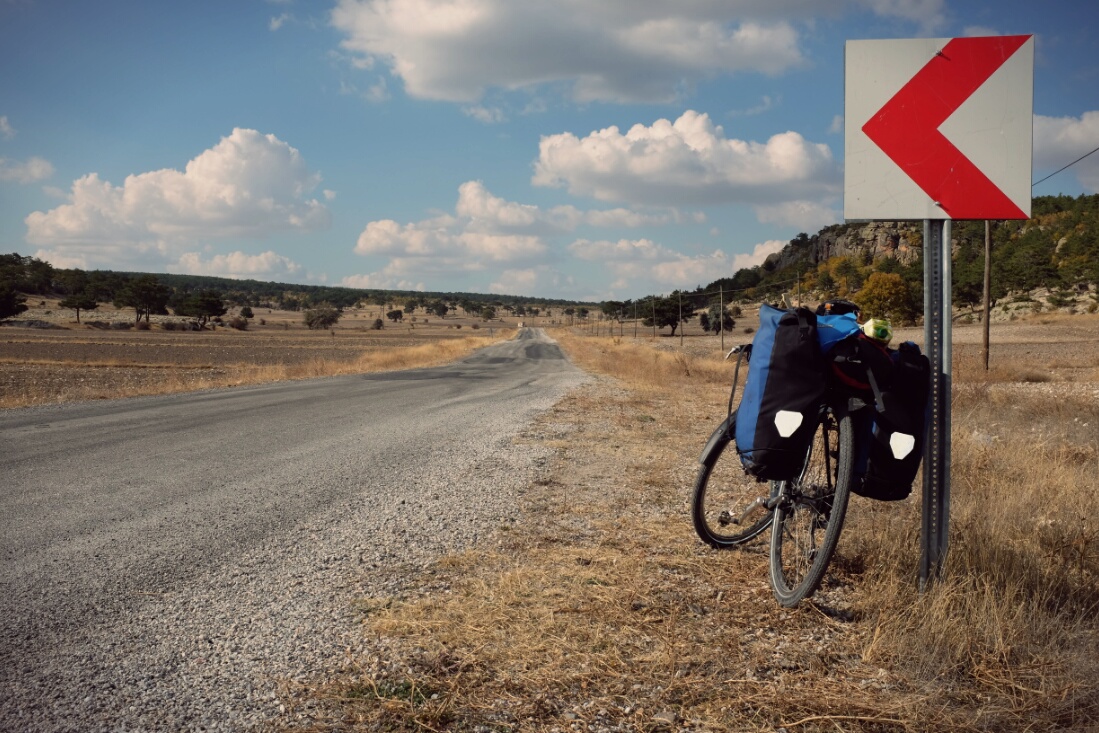 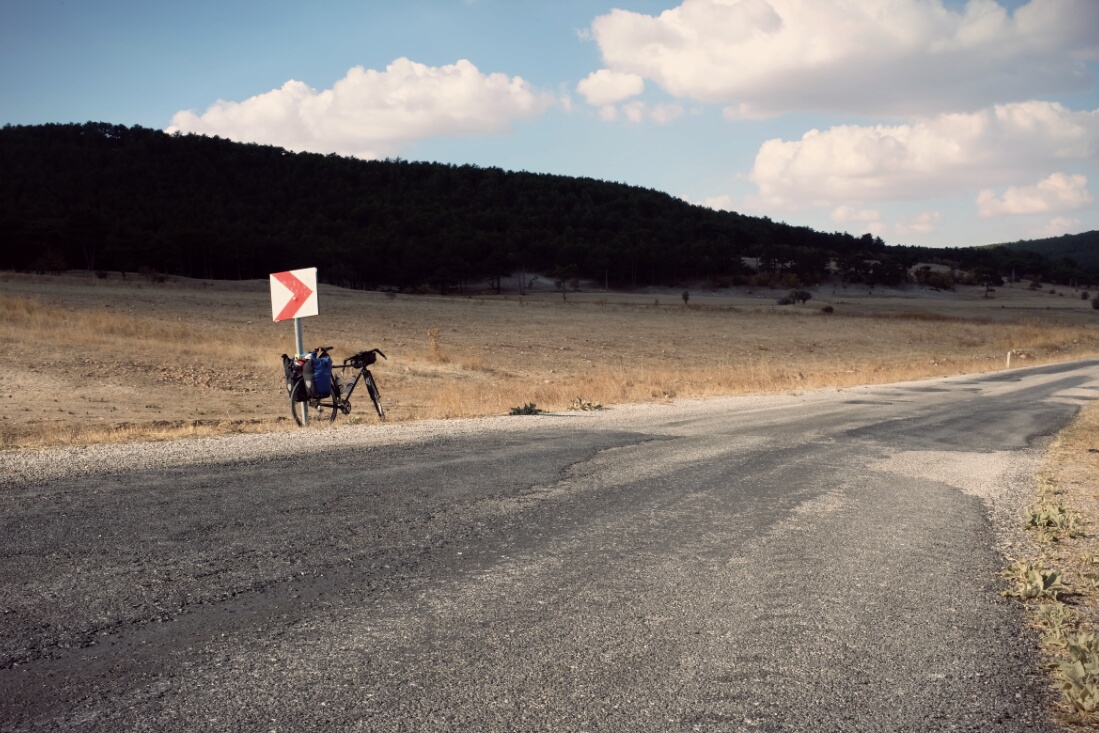 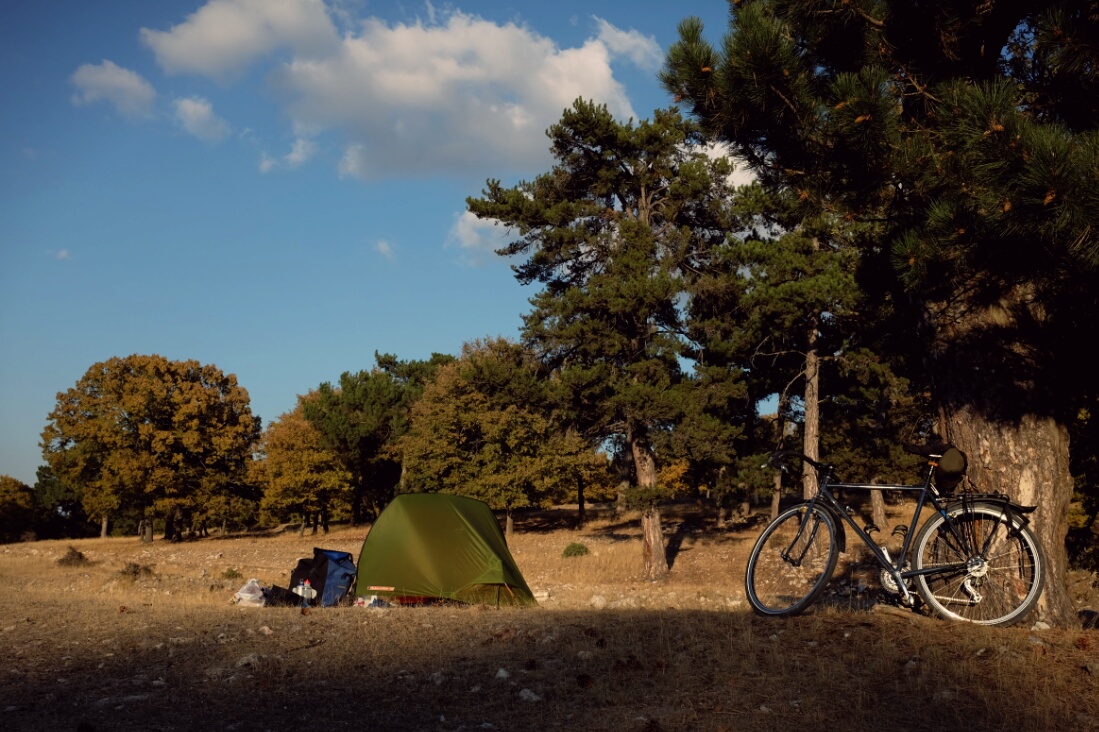 and a wonderful camp spot

It was a cold, very damp night.. with not a breath of wind the dewfall was very heavy and things were equally damp inside the tent from condensation. At breakfast I had visitors.. the first being a couple of old tractors (Fiats if you need to know ;-) with folk in trailers chugging up the valley to work the fields, they came by with a cheery wave.. and the second was a shepherd and his flock. I’d been listening to the distant cacophony of bells very gradually becoming louder… and then all of a sudden to the racket was added the loud rustle of dead leaves as a river of sheep flowed down out of the forest. I just had time to retrieve my tent and sleeping bag from the sunny rocks where I had lain them to dry before they were trampled by hundreds of tiny feet.. :-) 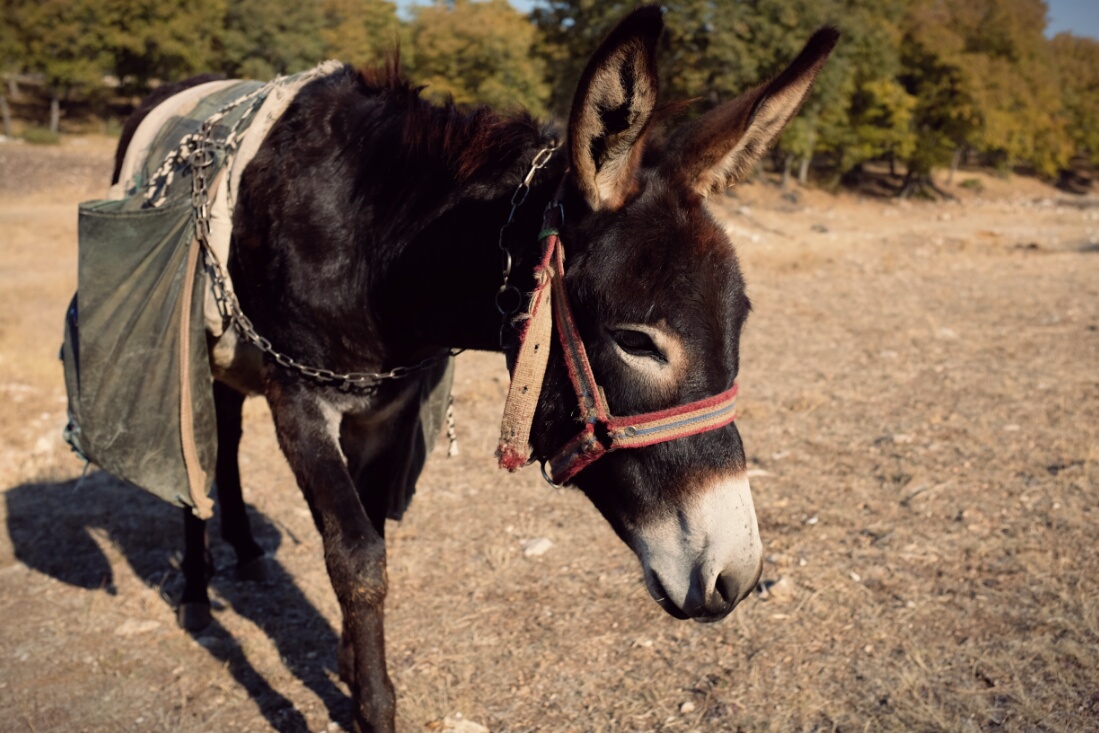 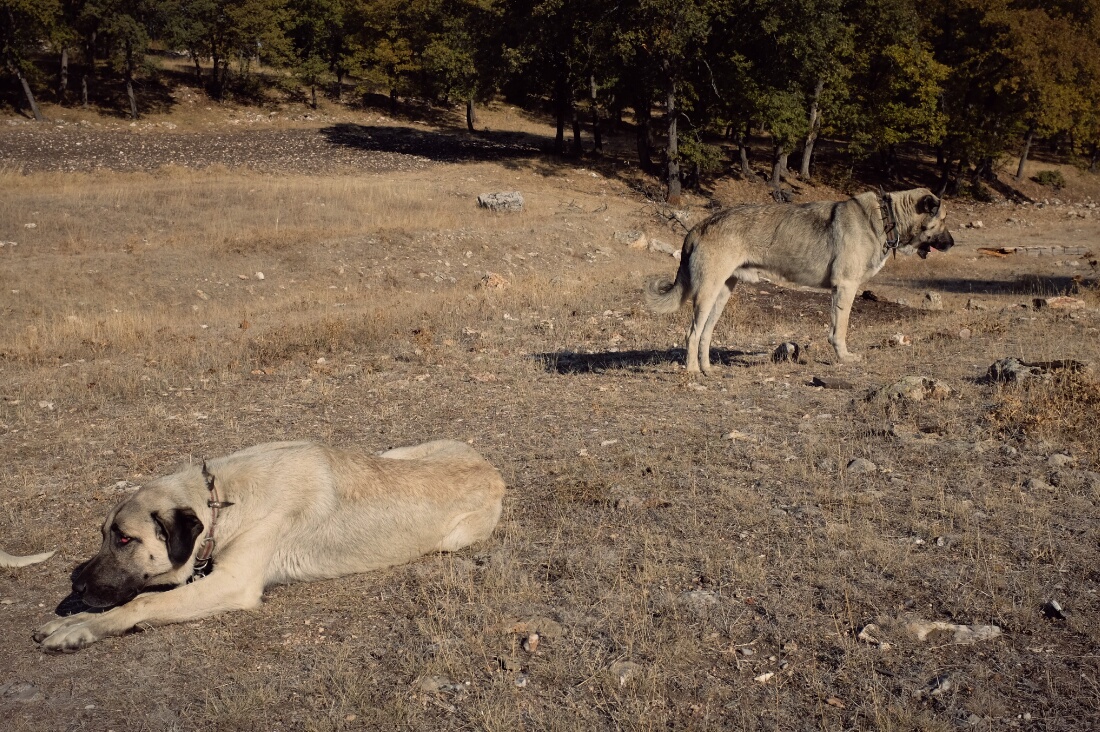 The shepherd was a lovely chap… as you would expect. He came over to say hello, shook my hand, asked the usual questions.. you know.. where are you from, what’s your name.. I told him what I’d been doing on my bike, he thought that was ace, and was also very taken by my little woodburning stove. Honestly wild camping here is brilliant, provided you camp with some respect for both the locals and their land I reckon you are far more likely to be brought tea and bread for breakfast than you are to be told to bugger off :-) However if you do find yourself in need of an icebreaker just get your map out. If my visitor could have had any cause for being annoyed at me for making my camp in his pasture it would have been for distracting his very curious donkey and his enormous sheep dogs, almost as big as the donkey and complete with iron spiked collars as protection from wolves, from the job at hand. They made their camp next to mine and gave his whistles and shouts a stiff ignoring.. I am clearly more interesting than sheep… he had to come back for them :-) 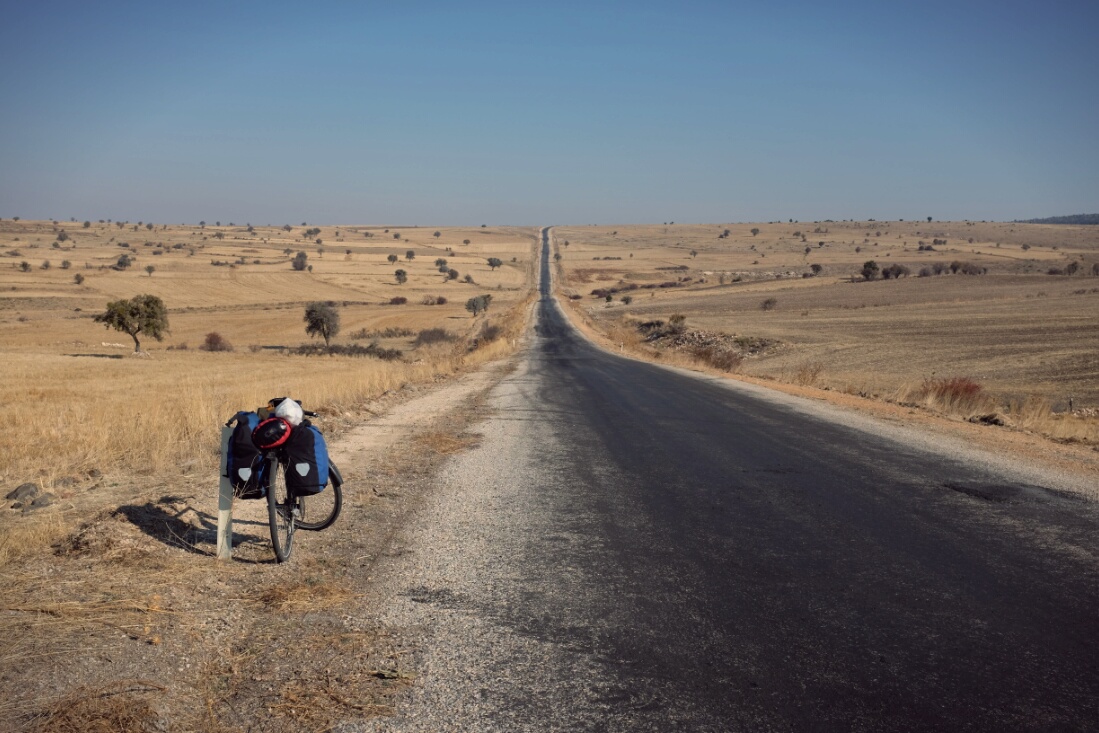 Breakfast was a leisurely affair with just 50km left to ride… I didn’t get on the road until 10am. Only the very last  30 km to Eskişehir itself were relatively dull after the sublime riding do far.. but the final 10 were largely downhill and I was in the city centre, and at the end of the road for this trip in time for lunch :-) 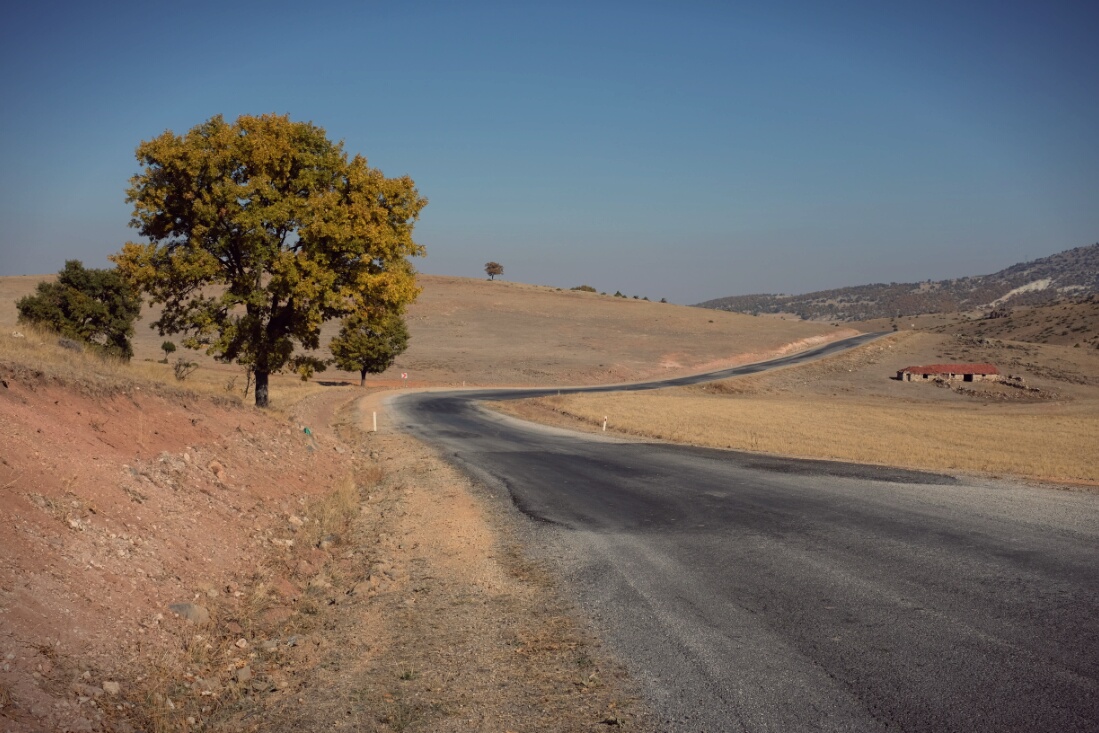 The leaves of the deciduous trees are turning, adding gold and the occasional spot of rust to the wonderfully earth-hued landscape 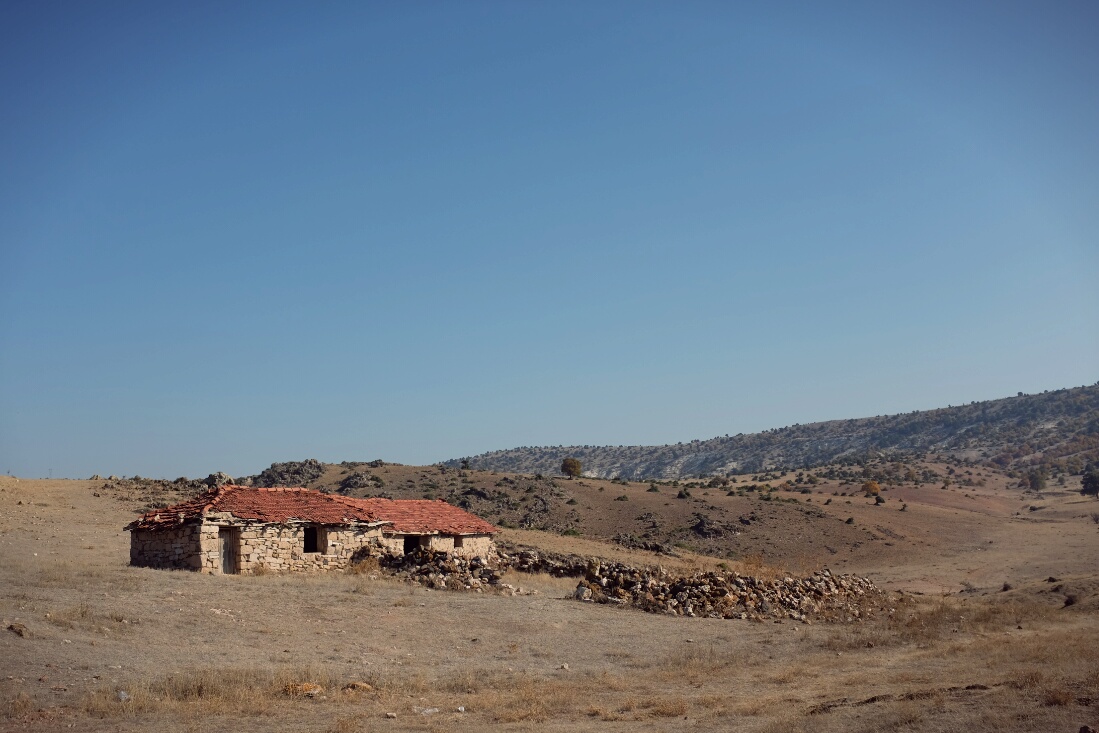 I really did enjoy my last few km in Central Anatolia 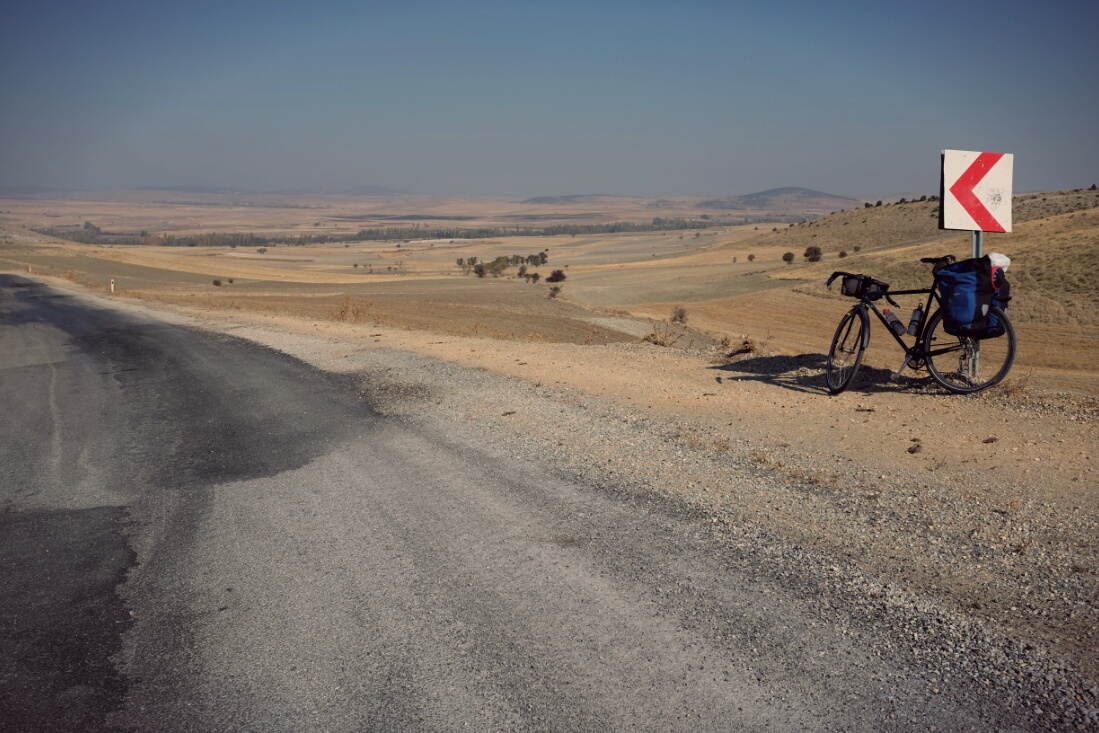 savouring the vastness of the landscape… 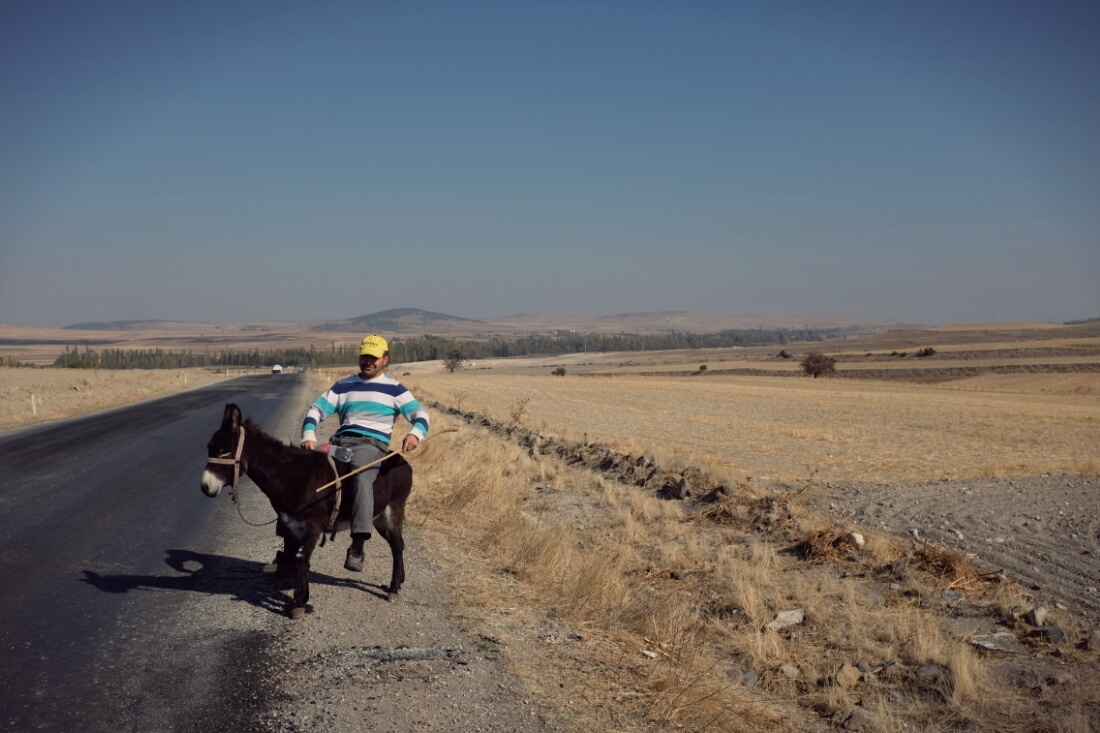 and some final comedy moments :-)

Eskişehir is a nice town… it has 2 universities so you can imagine what it’s like… buzzing with a real happy sort of atmosphere.. such a contrast to the dry plains surrounding it. It even has canals on which you can take a gondola ride. This week is Turkey’s most important religious holiday so everyone was out and about as I arrived, many of the city centre streets appear to be pedestrianized and were absolute mayhem as I threaded my bike through the crowds. 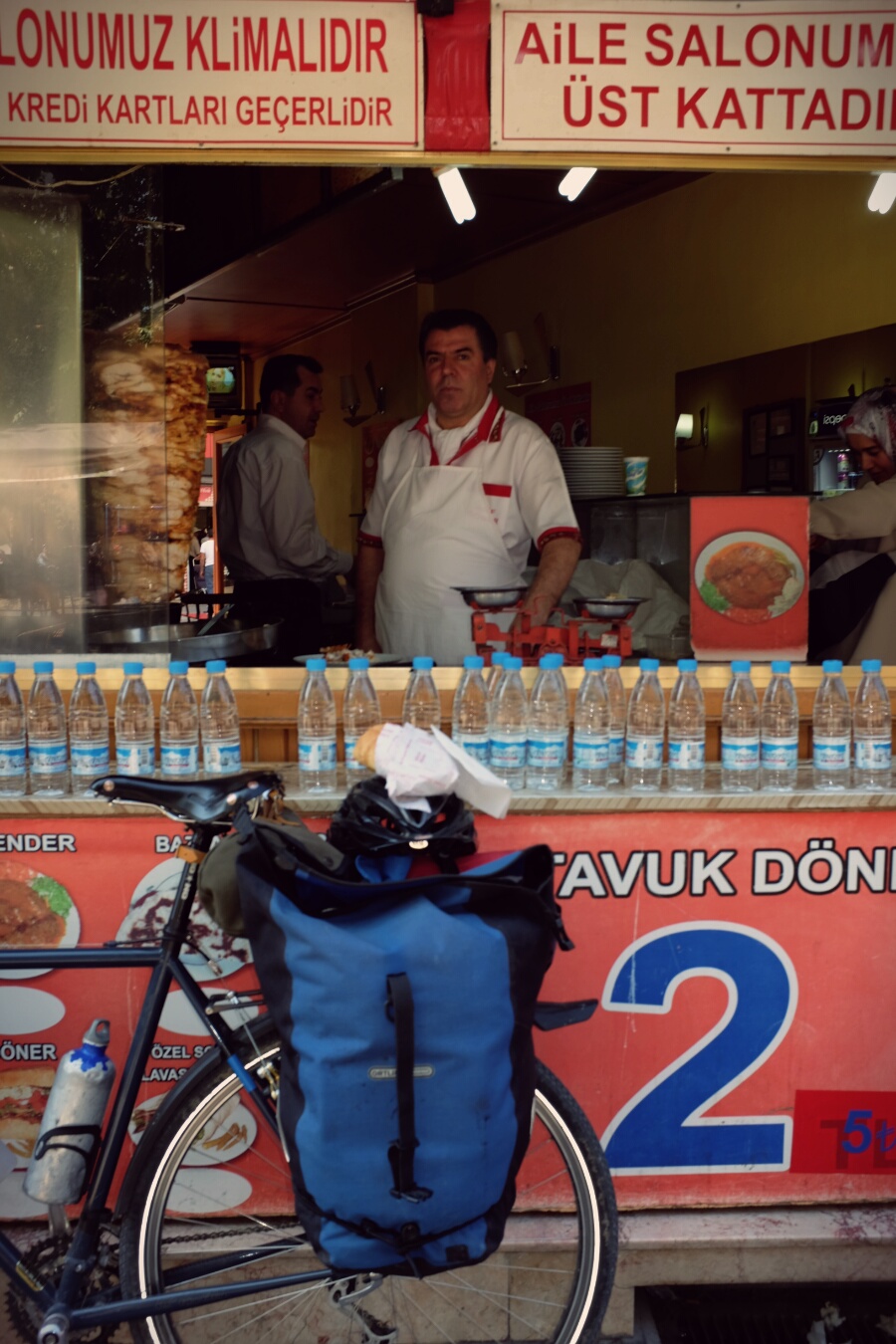 lunch.. despite the expression he was a fun chap.

So… it is the end of the road sadly as far as riding goes on this trip. My hand has been forced a little by the public holiday as buses become fully booked and the ferries across the Sea of Marmara run on a special schedule that isn’t on the IDO website… so rather than risk missing my flight I had to do a little forward planning… a quite unnatural thing… I booked a bus ticket from here to Istanbul for Tuesday.. Wednesday is the day apparently that everyone wants to travel at the end of the holiday… so I have a day to enjoy in Eskişehir and then 2 days in Istanbul.. which is no particular hardship at all :-) 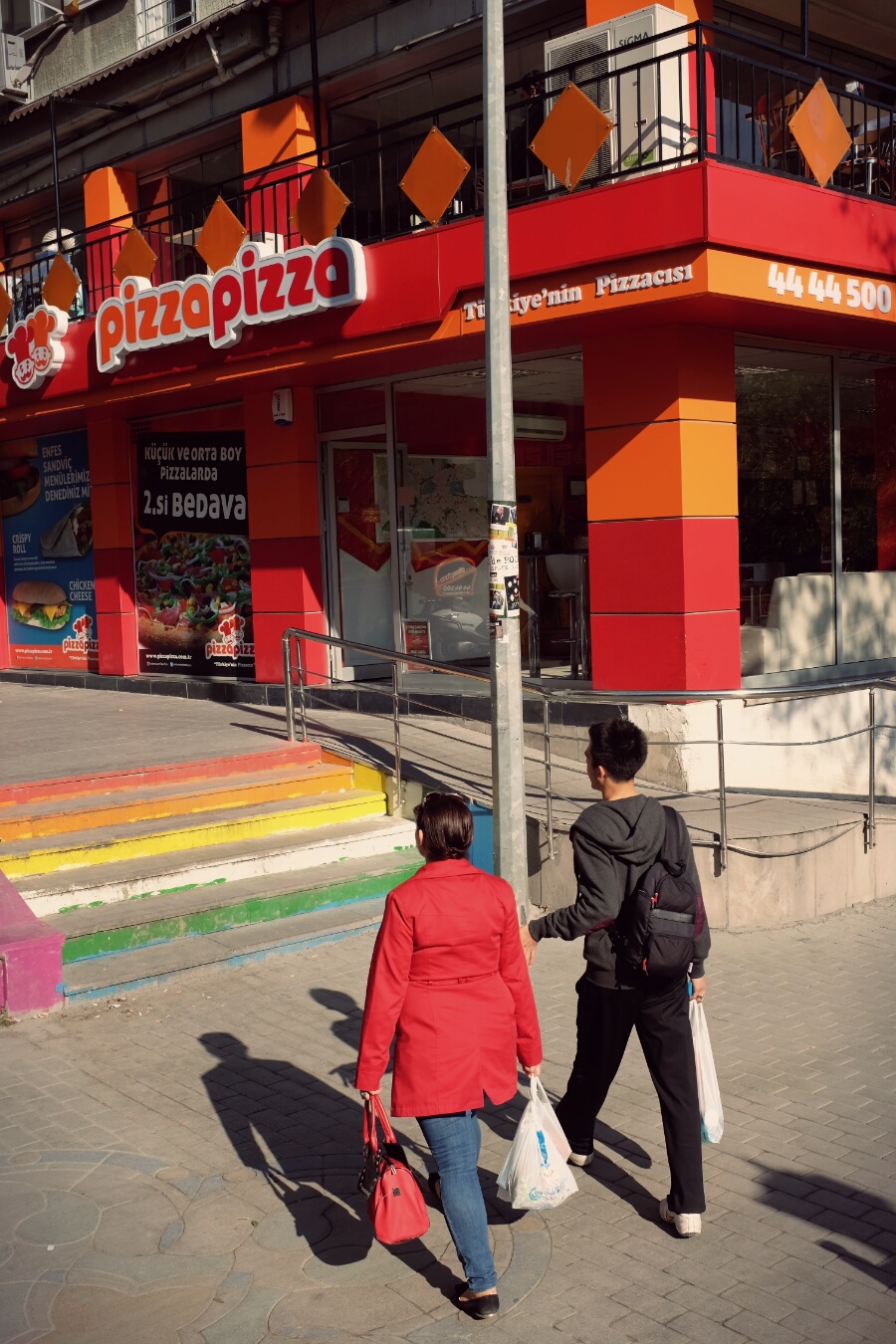 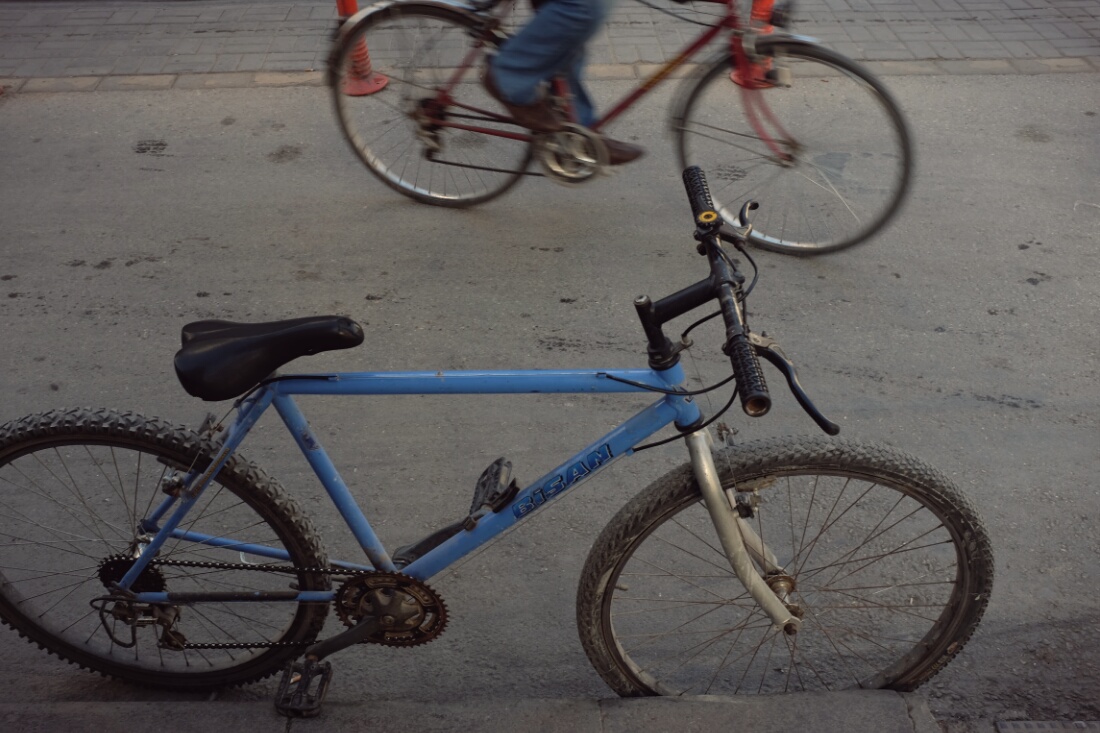 ..with lots of bicycles.. 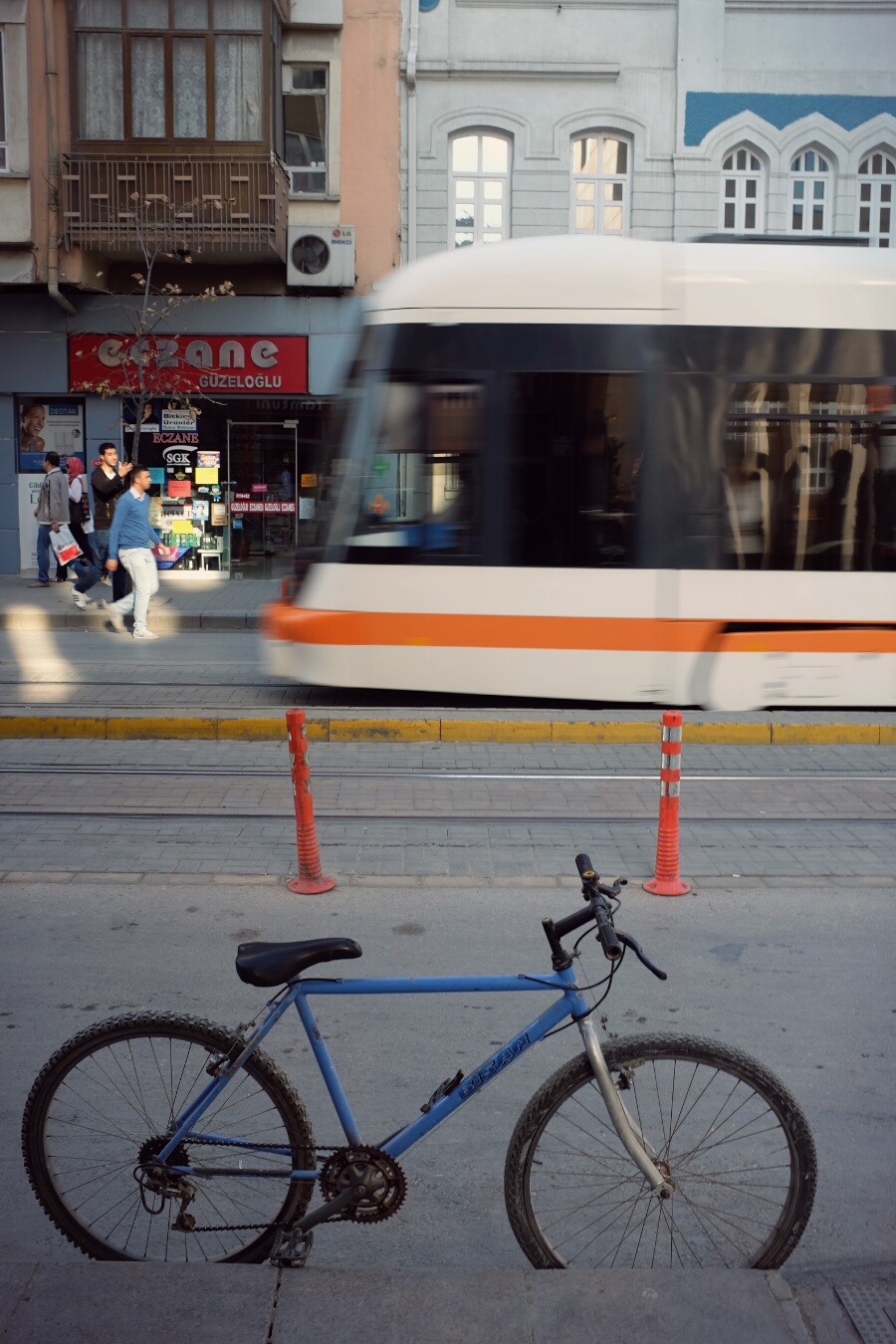 Away from the coast it’s been a great ride, the cycling is easy, food and water doesn’t need to be planned for and the people are the most wonderful of any country I have travelled to date I think.  I might write again from Istanbul, possibly rambling on a bit about how I must come back and ride the far east of the country at some point… my next trip ‘needs’ to get back to something properly wild, woolly and challenging again and I suspect the east may well fulfil that lust. I might also write about how much I will miss the wonderful people of rural Anatolia, and about what a great bike the Surly Cross Check I put together a few weeks ago is for this sort of lightweight, soft adventure on 2 wheels.. it is a very satisfying thing to build a bike and then take it on a long journey..  and my camera too, a Fuji X100s.. with it’s fixed 35mm lens and rangefinder-esque handling it is pretty much the perfect tool for a bike trip.. although it still won’t get me to give up my film rangefinders at home. Or I might just dump a load of street photography… probably the latter on reflection :-)

In the meantime however I have enjoyed somewhat more than a drop of cold beer in the rather excellent bars here… and now the riding is done bought myself a pair of jeans so I can look a little less feral on the streets and in the bars of Eskişehir and Istanbul… not an easy task finding a pair in skinny cyclist size (30×33) ;-) 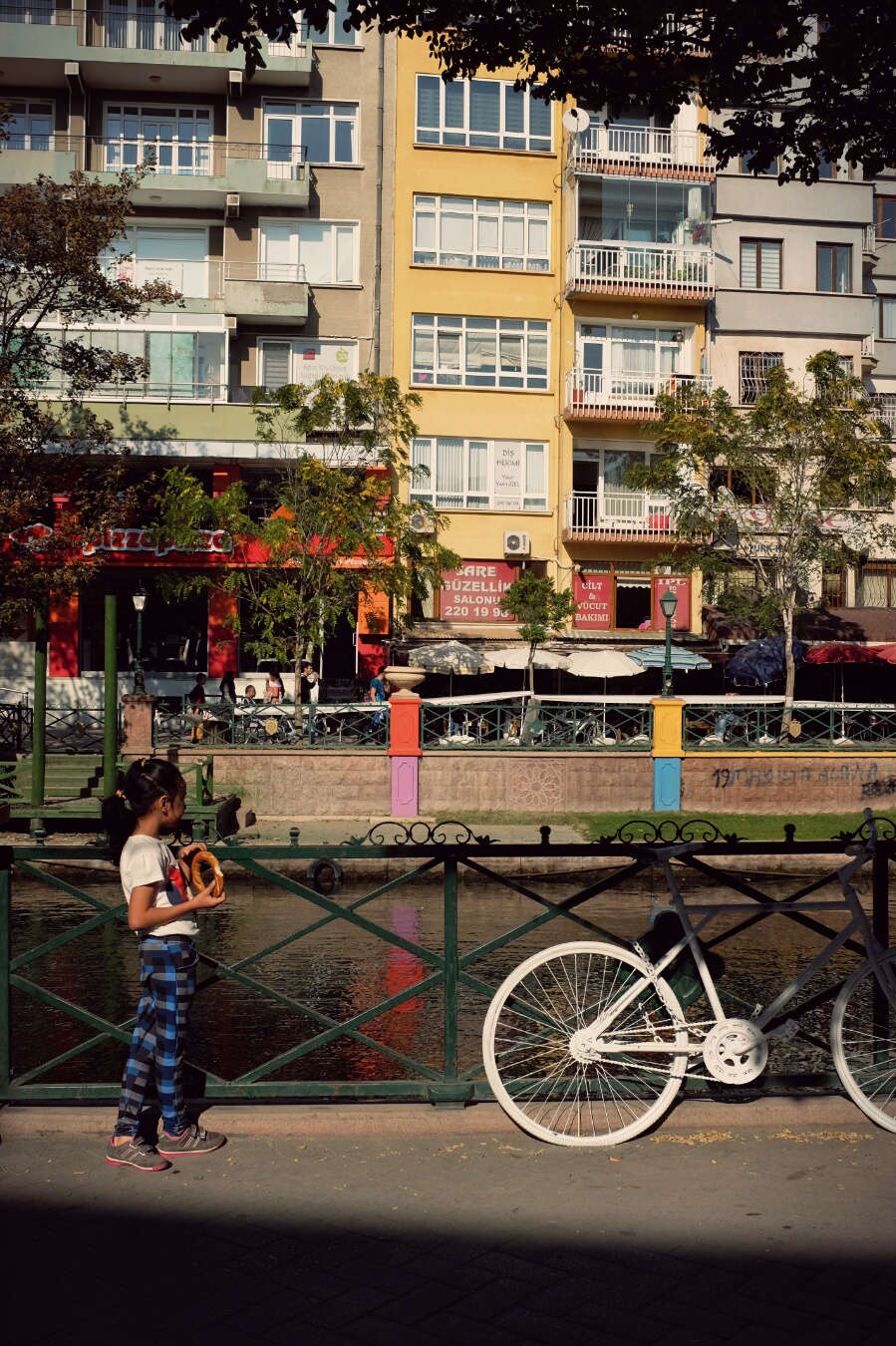 Eskişehir… as cities go.. very pleasant, and a happy vibe to it. 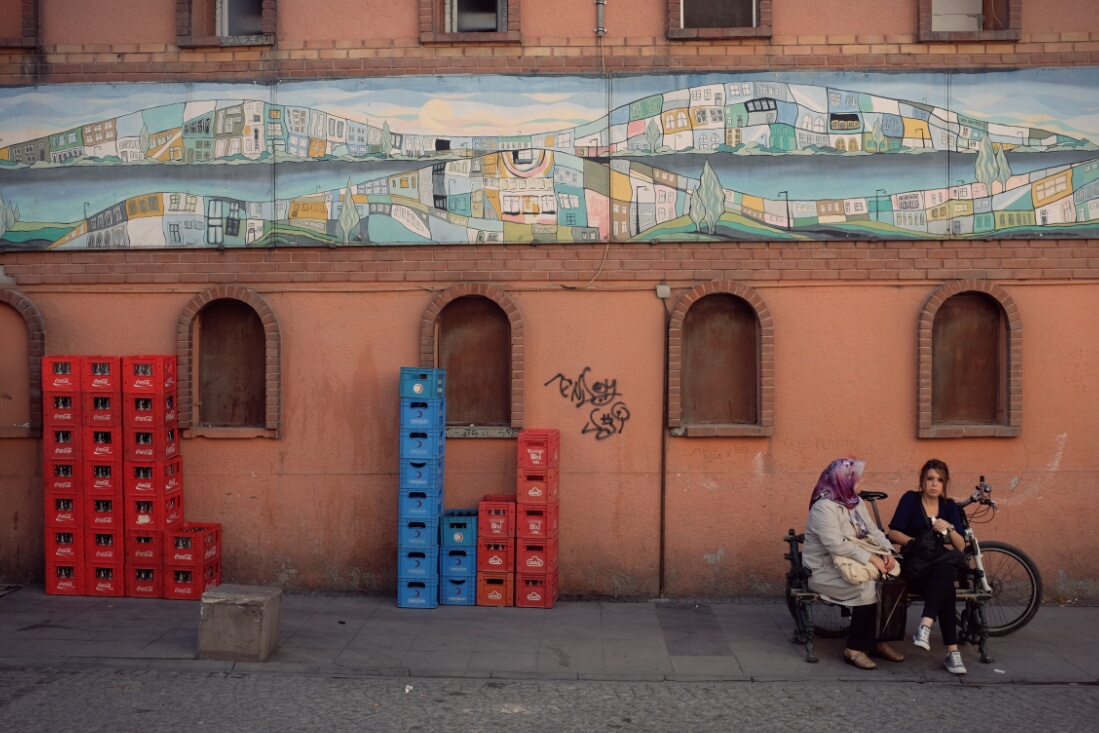 11 thoughts on “Eskişehir… the end of my road”