Haven’t been inspired to write of late.. figured there is no interest for my readers in just hearing about just lots of riding in pouring rain and gale force winds… and kind of busy with work too. Something I have been doing of late however is archiving old slides from past adventures. I can remember most of the cool stuff that happened no matter how long ago.. but this afternoon I came across a slide that brought back a fun albeit tiny little memory from many years ago while riding across Ladakh. I was crossing a high altitude plateau, pretty much dead flat (but ringed by mountains), at an altitude of around 14,000ft. The air was so clear I could see very many km ahead. I’d not seen a soul for a while and the plain was completely devoid of life… until a small black dot appeared on the horizon far ahead.. rather like a distant ship on an ocean. It grew larger ever so slowly until it was close enough to resolve into another cyclist… I can remember my excitement.. and his. He’d cycled all the way from Paris and since the Iraq war was still a very recent memory apparently he had not seen another cyclist since Turkey. I was very envious, I only had 3 weeks to get as far as I could. We shared biscuits.. and water. I suspected I would not have access to water for a couple of days so was carrying 10 litres – having topped up at a river early that morning.. and he’d run out of water earlier that day. The other thing I can remember being amazed at was the sheer amount of clobber on his bike. Over the years I’ve refined my packing list down to a very few Kg relative to what most cyclists seem to carry.. his bike on the other hand.. well, you could just about make out some wheels under all the gear :-) 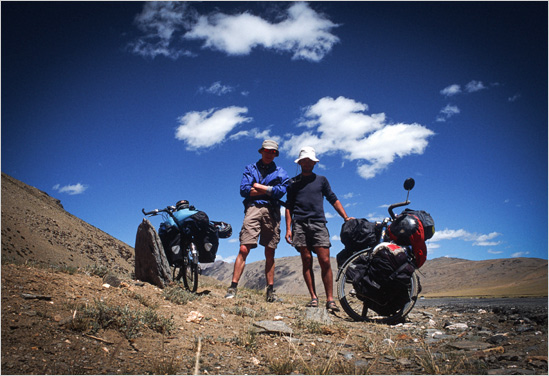 Anyway, looks like, if all goes to plan, I should be back in this part of the world later in the year! Hurrah!

While I’m on.. most of the slides I was archiving today have seen the light of day – either on here, in exhibitions or when I could be bothered to maintain a proper photo website. This one however I came across hasn’t. Not a particularly remarkable photo but I like it simply because of where it is. Yaks grazing in the shadow of the mighty Tien Shan. Want to go back there on my bike too :-) 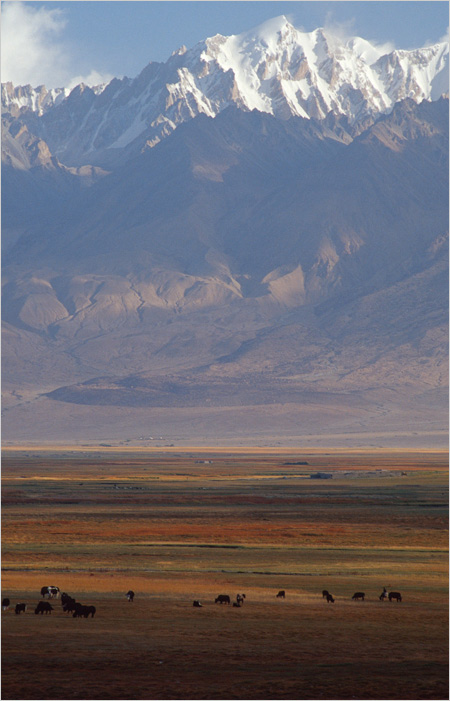