I thought that, for once, I could perhaps make myself useful and scribble a general info flavoured post with info on maps and stuff  – especially given that Crete is such an accessible destination  with some absolutely fantastic riding that doesn’t require a big investment in time, messing with visas and so on. So..on that basis here it is.. 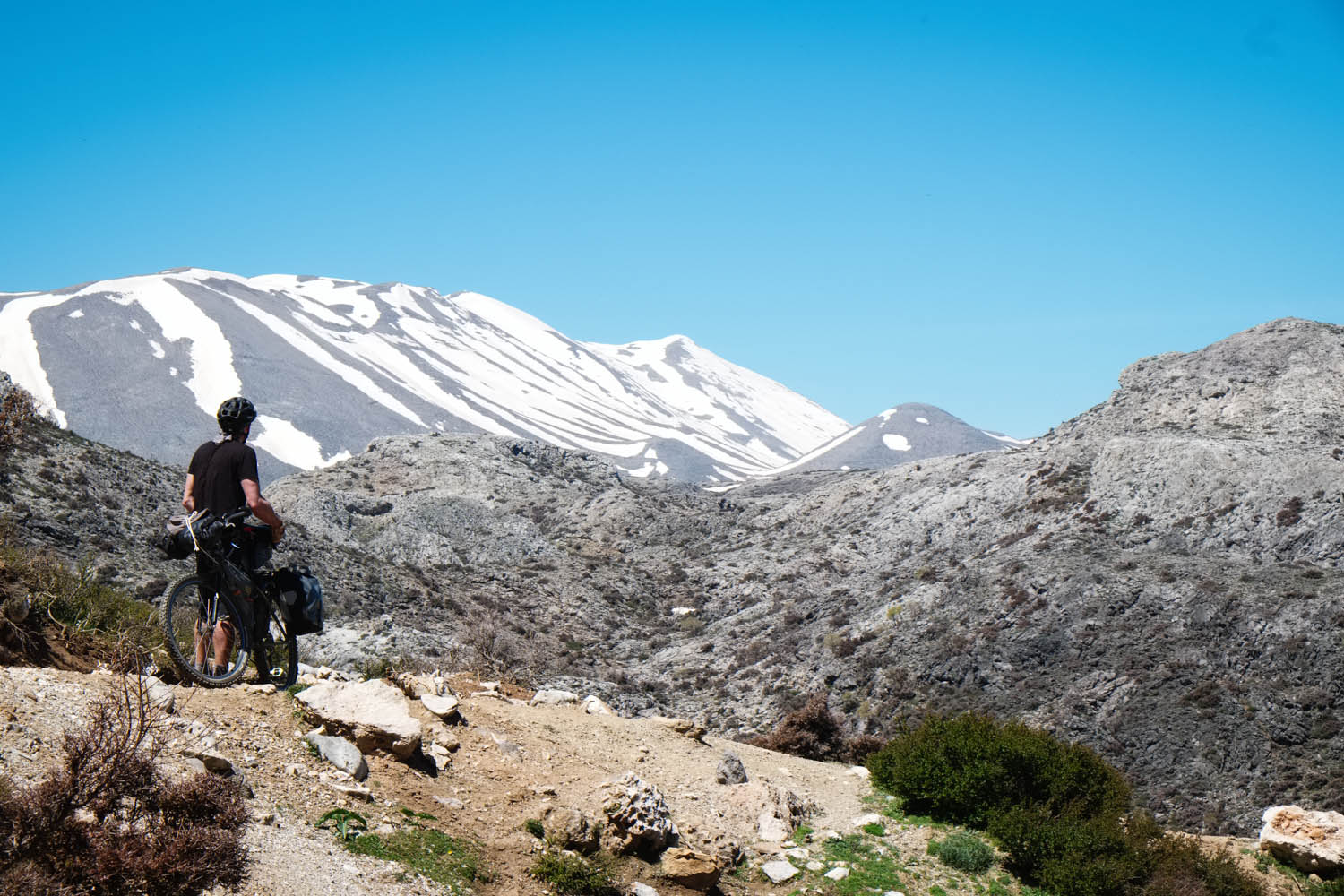 Crete was just ace for trail-riding

Crete is absolutely stuffed with dirt tracks and trails.. some harder to navigate than others but if you have the patience to navigate what is, at times, a complex network (it is well worth it for a traffic-free window into rural Crete) then there are some very good trail maps available. The most commonly available/known appear to be the Anavasi 1:25,000 hiking maps – but you’d need a lot of those for a biking trip. Happily in 2014 a series of very good 1:50,000 topo maps was published by the Greek Nakas Cartography under the ‘Roads’ brand (get them here). I took sheets 402, 404 and 405 (numbers are linked to each individual map) which together cover all the main mountain areas of the island – Lefka Ori, Psiloritis and Lasithi. For a general map of the whole island the Reise 1:140,000 edition is useful. As is the norm for when I go away on two wheels I didn’t do any detail planning, just go with an idea and then just take it day by day. It’s much easier given how many trails there are. 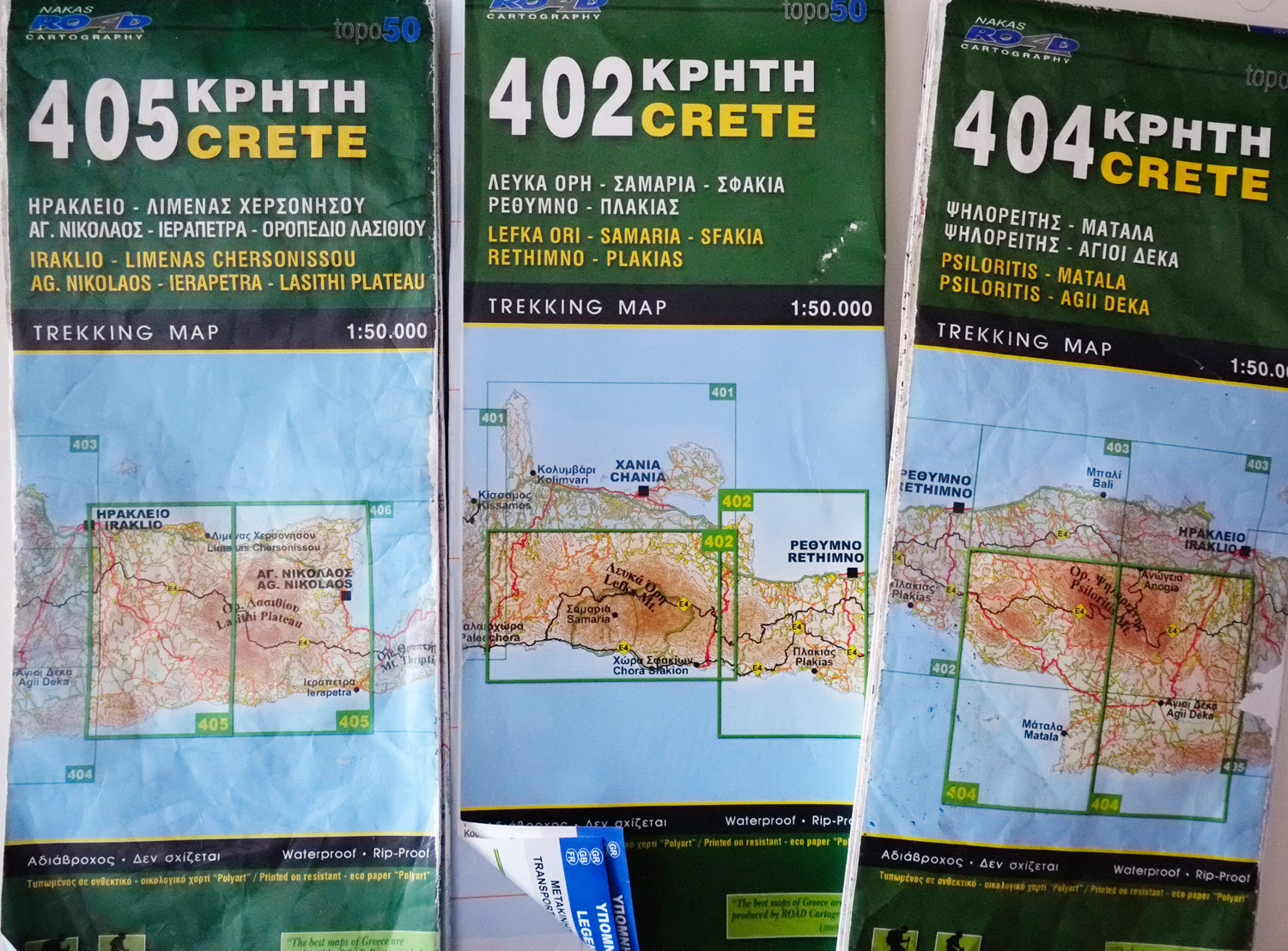 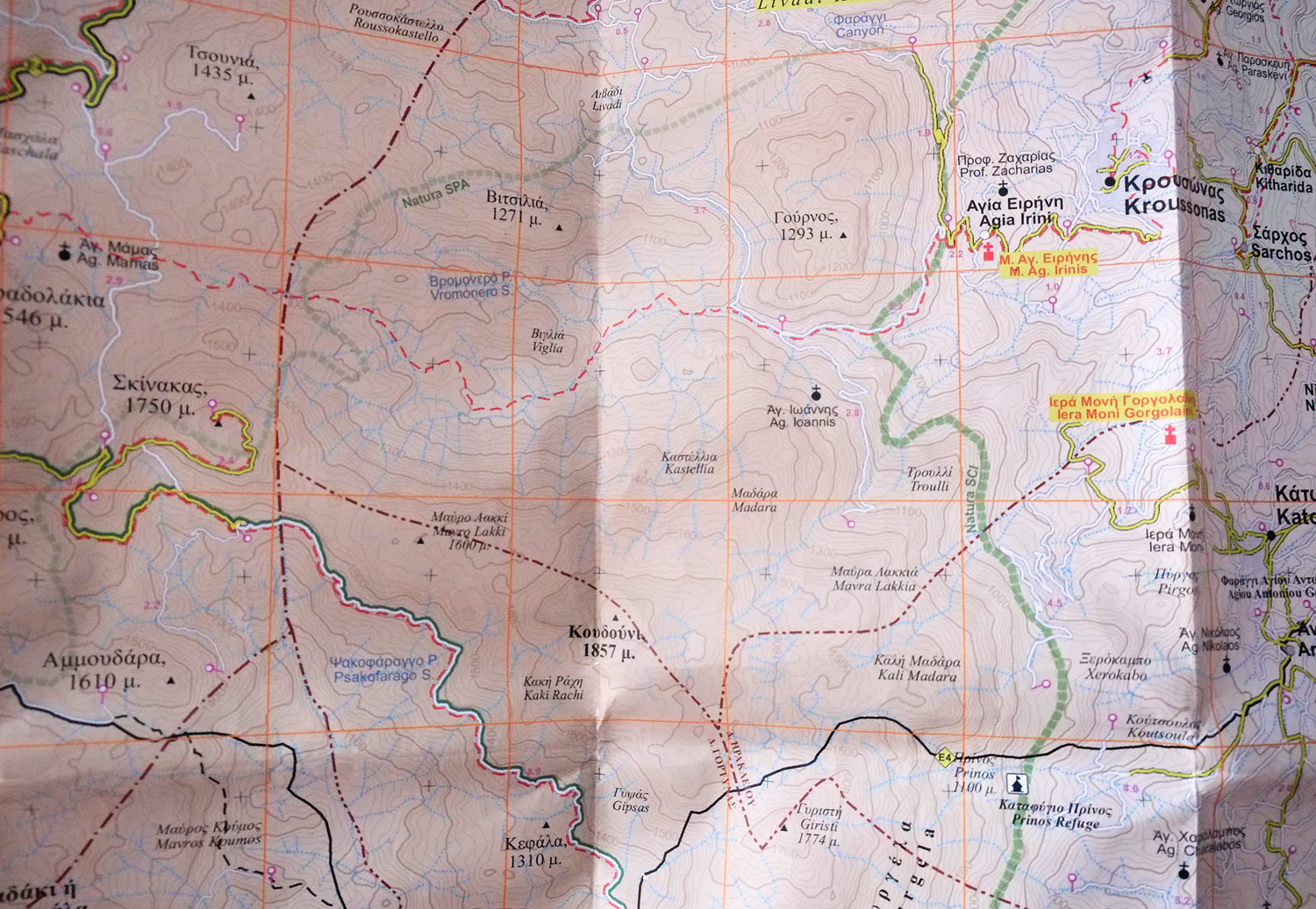 The level of detail is very good, as a rule roads in white are dirt.. but sometimes so are the yellow minor roads, trails and hiking routes are in red and black. The accuracy was very good… but on occasion we found a tiny trail marked on the map would suddenly disappear or just not be there to begin with. Depending on the source of the mapping info it may well be that some trails are so old they’ve just disappeared over time. Be prepared to backtrack from time to time if really exploring. It’s fun. A GPS could be useful for lat/long fixes – the maps do have lat/long info on them. usefully.

The Cicerone hiking guide to Crete was also useful with respect to ideas about what hiking trails might be rideable and so on. Recommended. 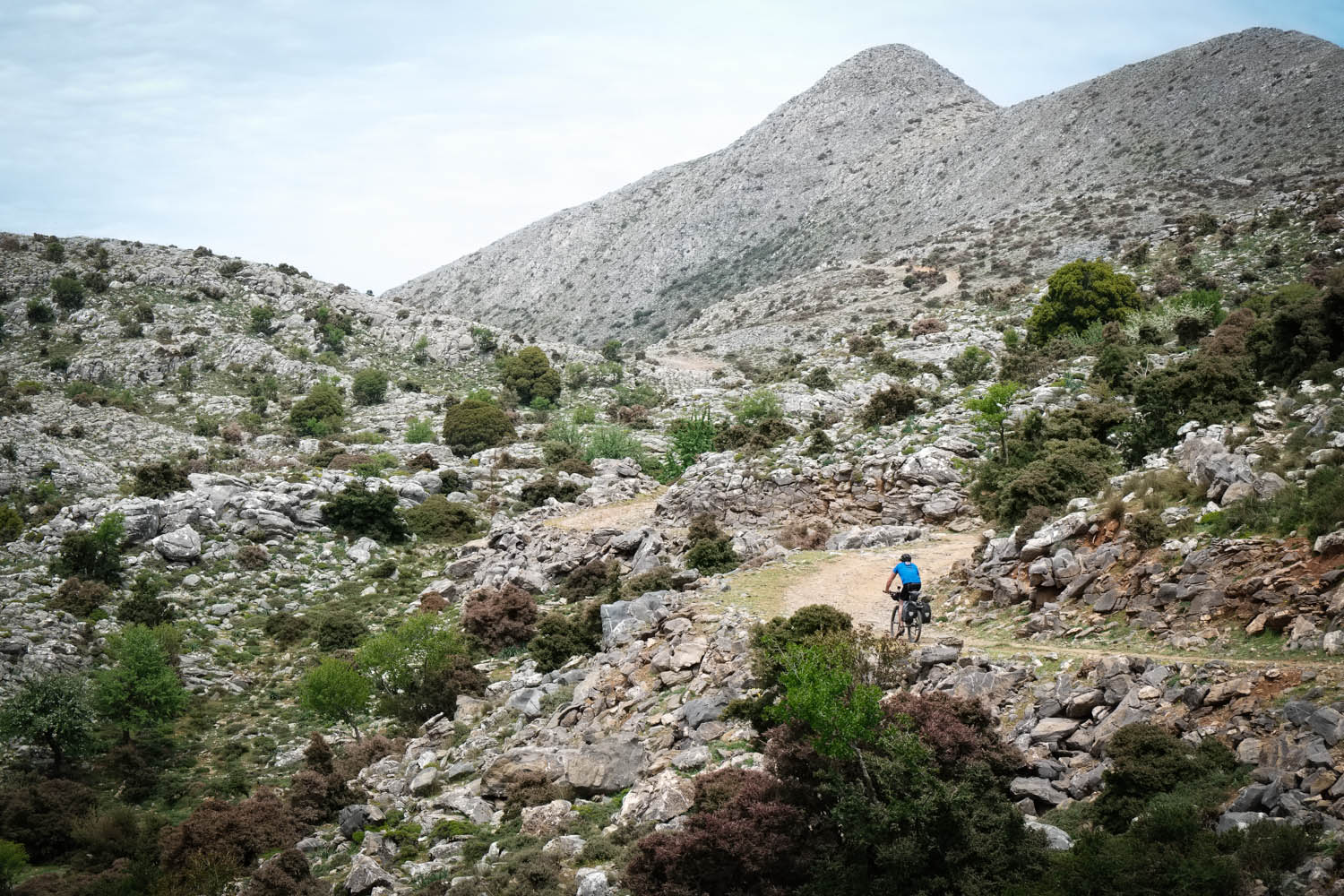 Very easy to find ‘interesting’ ways to reach a given destination

Crete is a really easy place to ride a bike in terms of staying fuelled. There are villages with bakeries all over the place.. and tavernas all over too.. some in quite unexpected spots. You won’t go hungry :-) We did take a small stove – but only for making coffee (essential). It really wasn’t worth the effort of camp cooking, you’re never more than a few hours ride from food and I’m happy with cold food (bread, cheese, fruit, veg etc) when not camping 100% of the time. It keeps gear weight down. 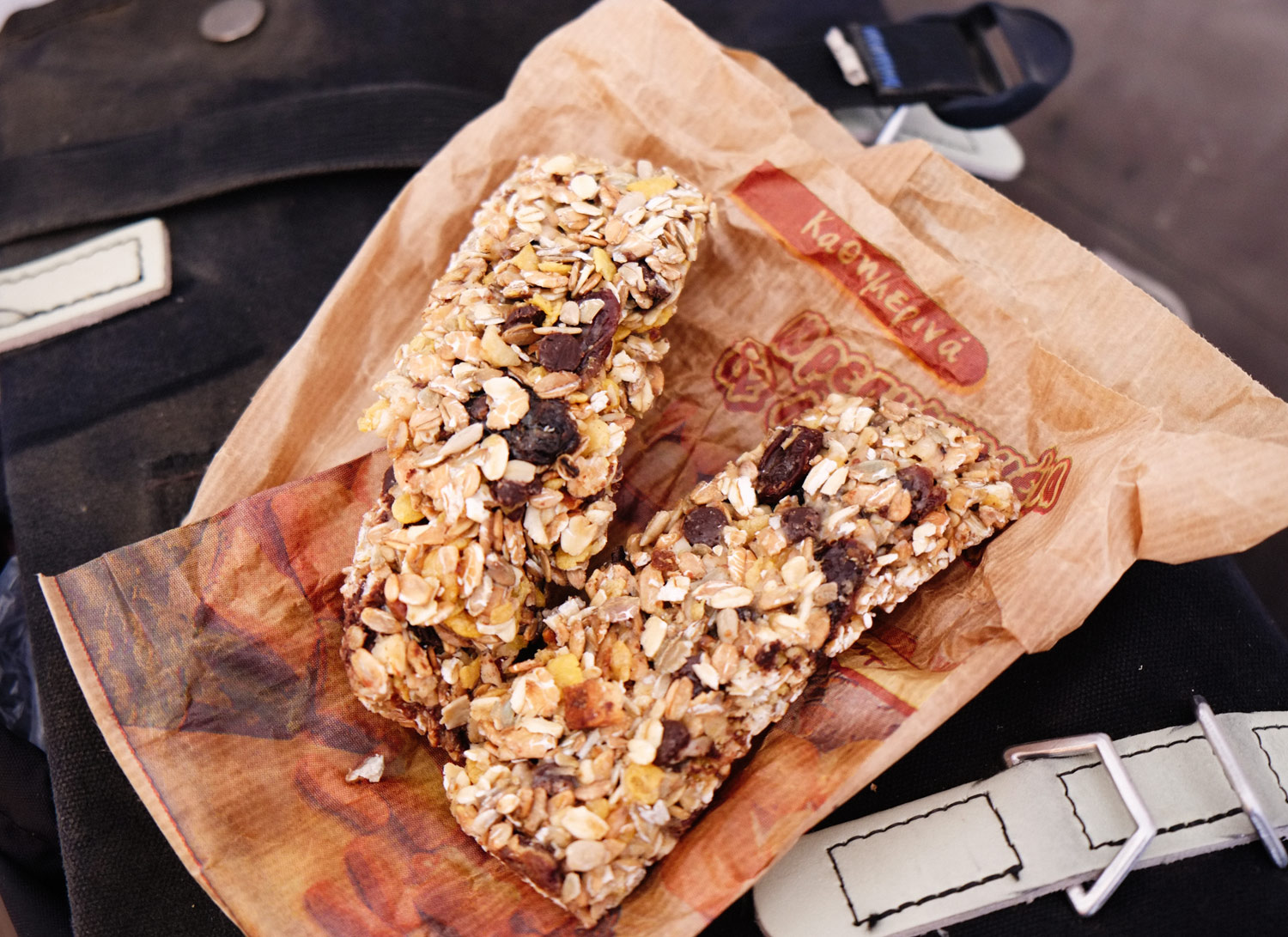 these came from a bakery in Tibaki if memory serves. They were great. Originally there were many more than two.. before I remembered to take a photo… ;-)

Because we were two I left my tiny folding woodburning stove at home and instead took a Coleman F1-lite gas stove – it’s my tinest, lightest gas stove and just the job for this kind of thing. Self-sealing screw-on gas canisters are not available in Crete but puncture type ‘camping gaz’ cartridges are available all over the place in supermarkets. Edelrid make a handy adapter. 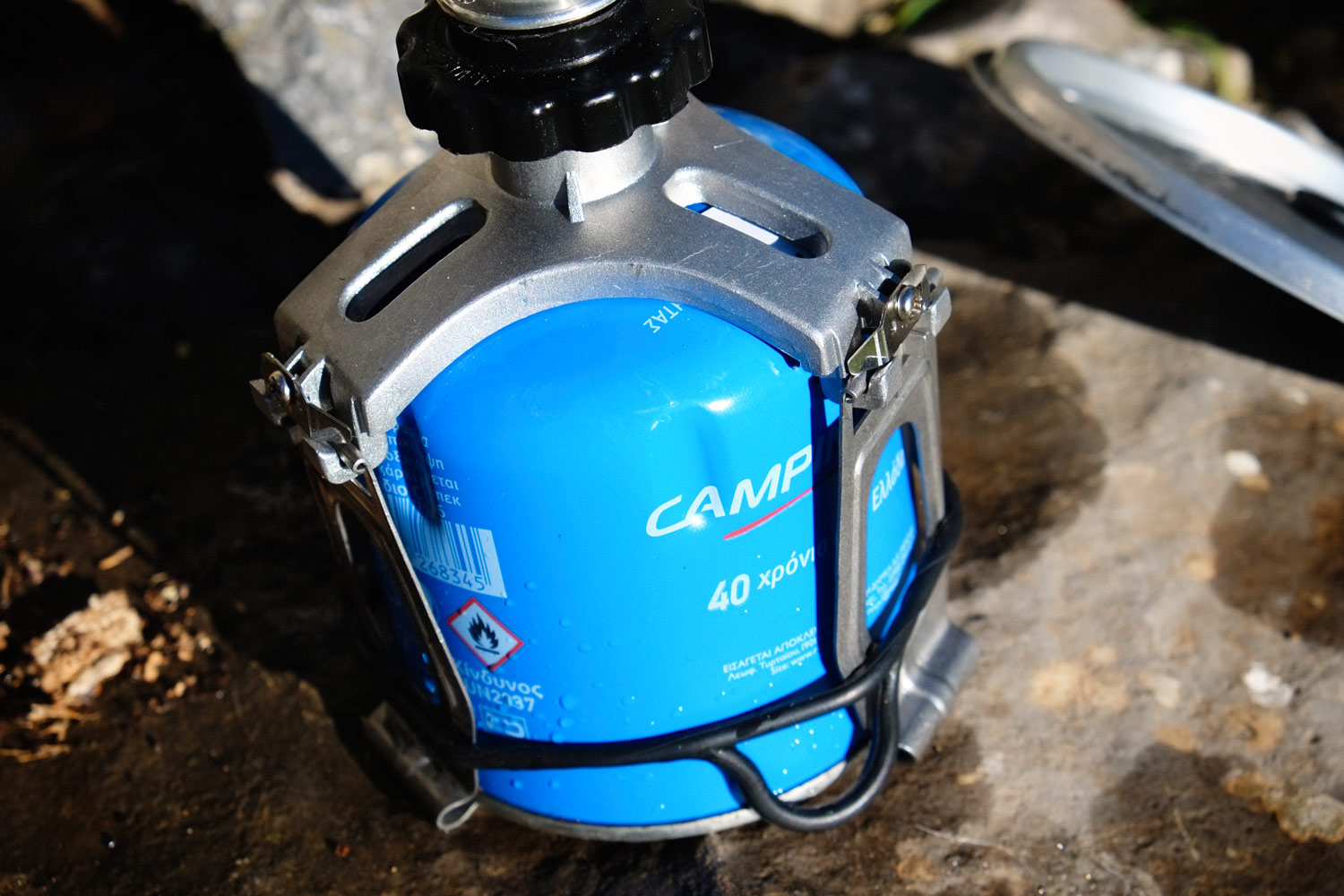 It was unseasonably hot while there but I would still recommend having a couple of litres at least on your bike plus some means of purifying water (I have had a MSR Hyperflow filter for the last 6 years and it is brilliant – very small and light for a filter. I’m wary of UV pen things that can break and rely on batteries). In the mountains there are cisterns/well scattered around for the livestock.. do filter the water. 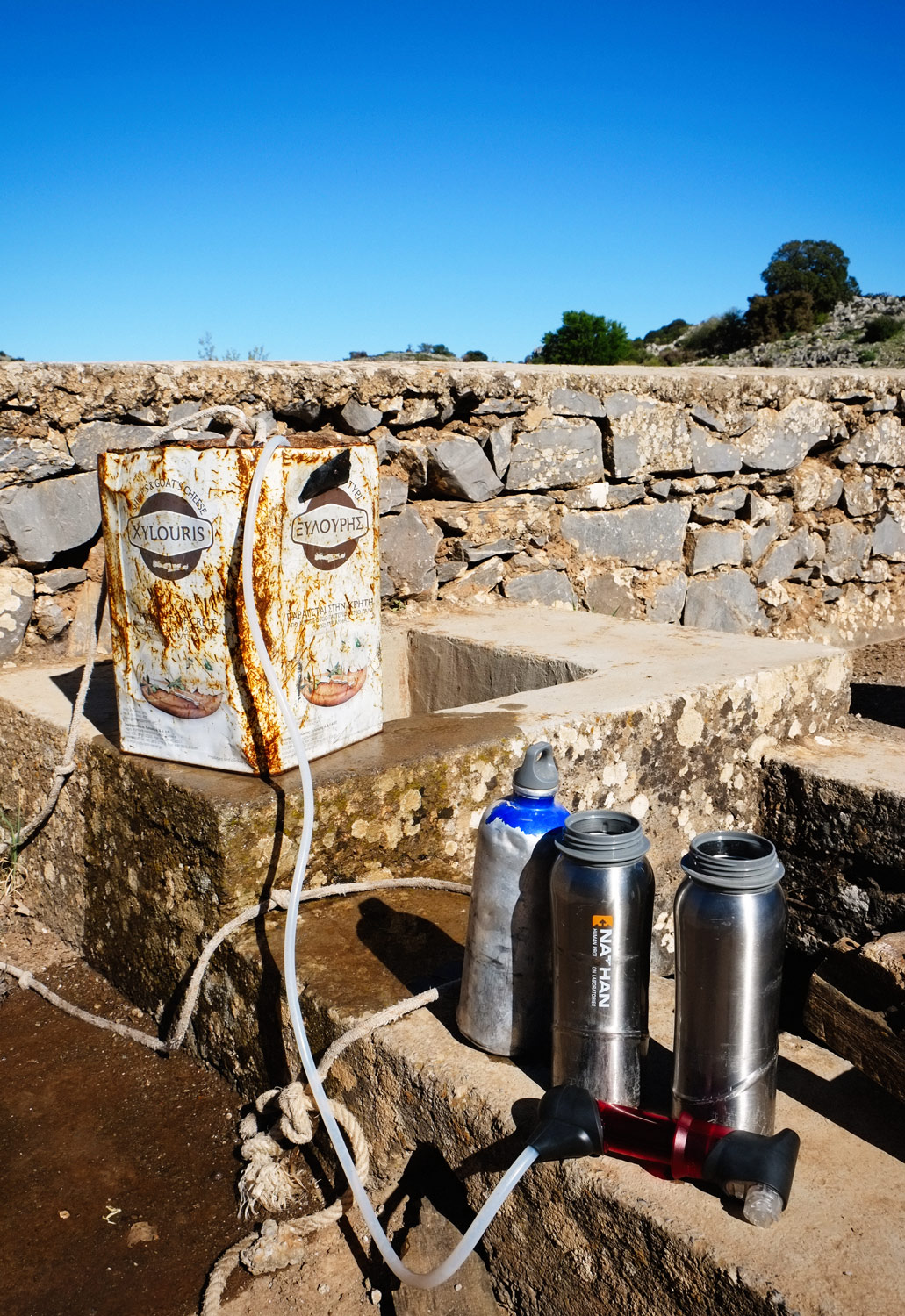 Filtering water from a well

In spring also there are a few little streams and springs as a result of snowmelt but it’s primarily limestone geology so water tends to disappear underground very quickly) . Some may well be dry later in the year. Tap water is drinkable.. drinking bottled water amongst the locals and tourists seems to be a habit rather than necessity unfortunately. I drank the tap water all over unless buying an extra bottle specifically to carry on my bike. The only area where water might have been a problem is the arid south coast.. but there were enough villages and tavernas dotted around that having just 2 or 3 litres on my bike was enough. 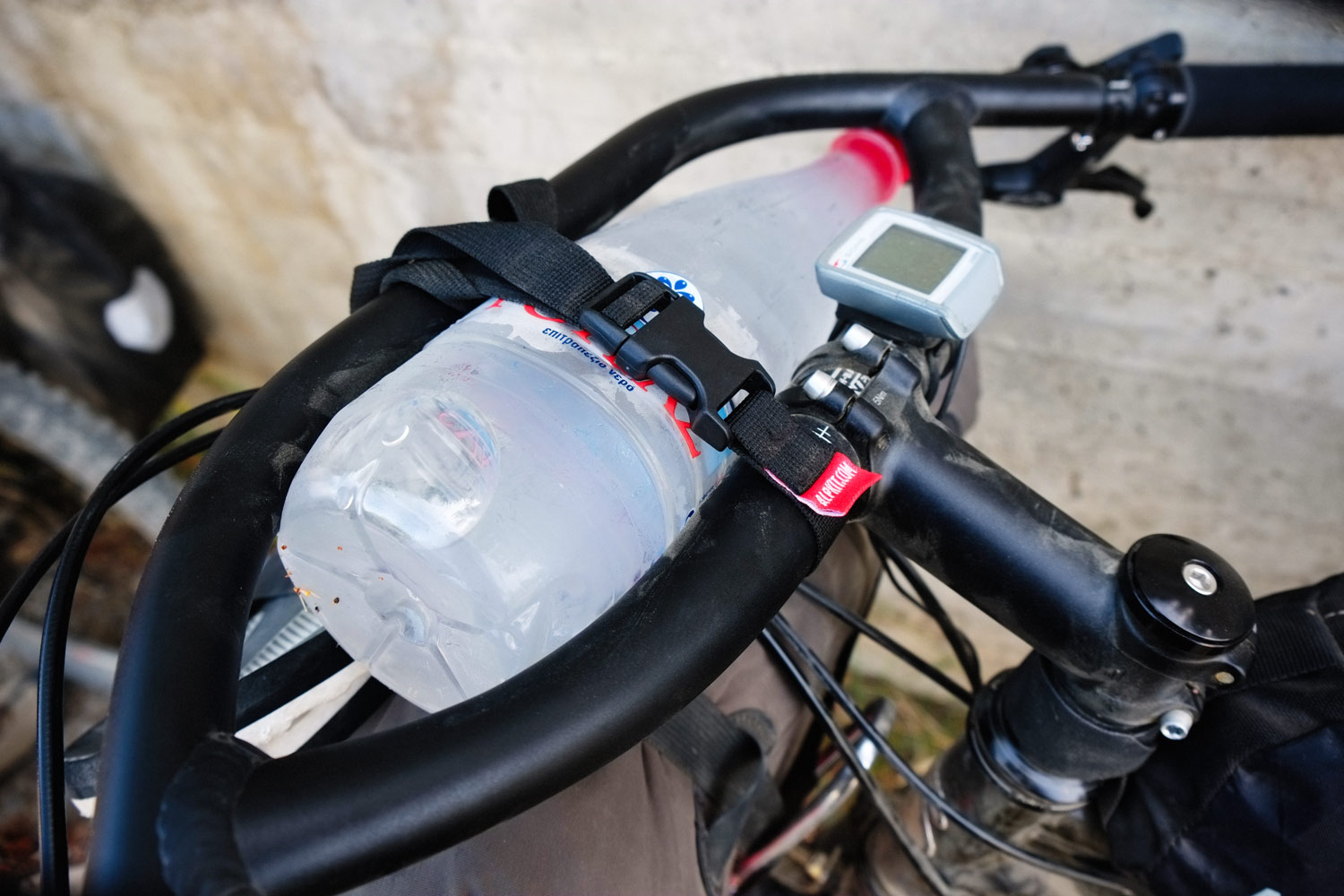 I did take a 4-litre ortlieb water bag but didn’t use it.. a mineral water bottle wedges in to the Jones bar on my ECR quite nicely when wanting some extra water on board.

Strictly speaking wild camping is illegal in Crete.. however.. in mountain areas you won’t have a problem. Just be discrete, respectful of the locals and the land and leave no trace and you’ll be fine. You’re very unlikely be told to bugger off if you’re camped in the mountains .. or on one of the deserted little beaches along the south coast. Just avoid busy areas, resorts.. that kind of thing. When not camping there are rooms all over the place, in the villages you’ll be able to find rooms for rent from local folk for between 15 and 30 euros seems to be the going rate  – just ask at the taverna or shop. 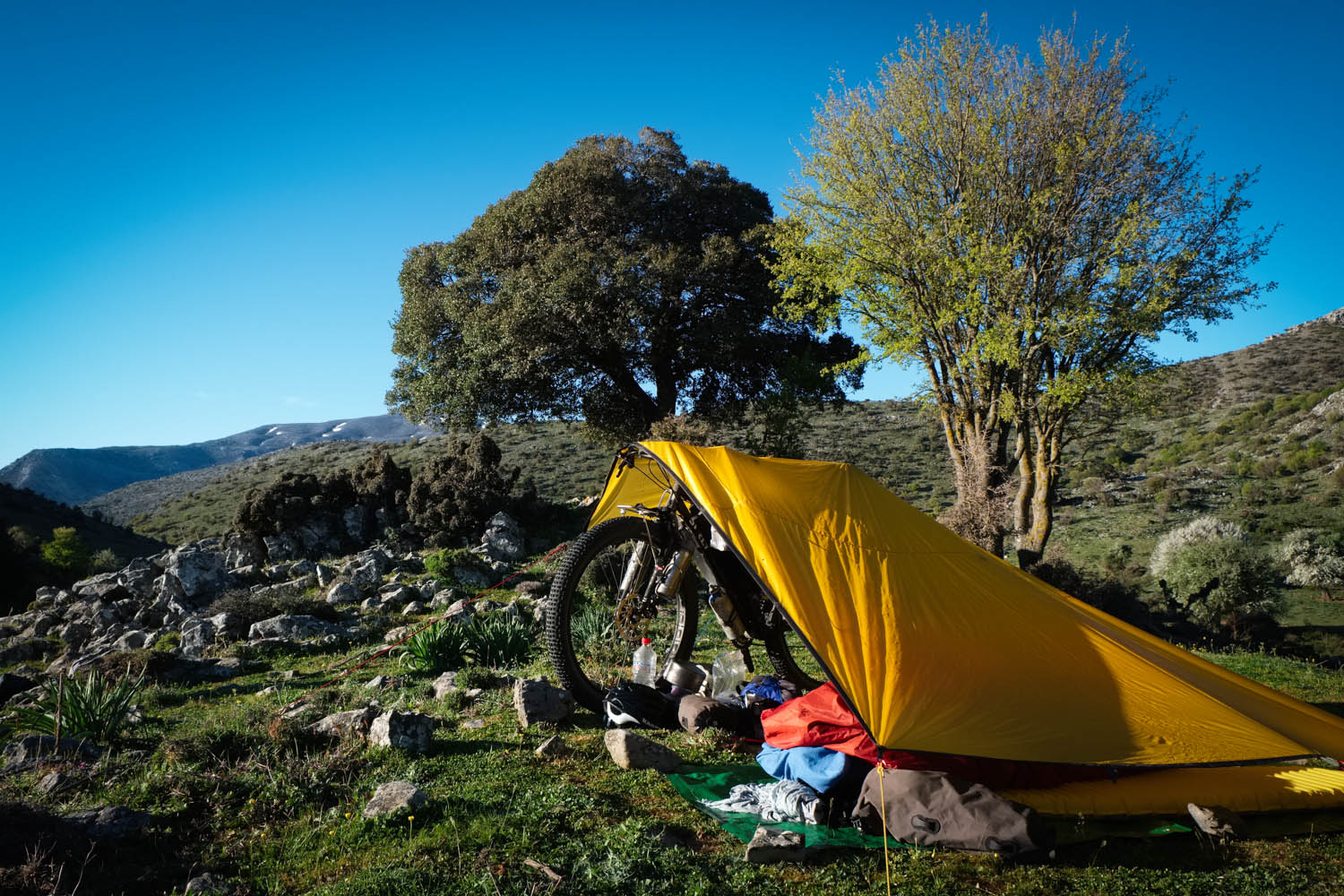 It gets really cold at night in the high mountains.. not unexpectedly.. but it is very easy to find comfy camp spots :-)

I’m sure there was something else I wanted to write.. oh yes, bike shops… if you need spares and stuff there are bike shops in the bigger towns (Chania, Heraklion definitely.. and there is a good one in Tibaki also). Cycling is growing in popularity and you can even find stuff like 29″ tyres and tubes. Handy. Thing is.. even if you’re out in the sticks and have a major mechanical you’re rarely more than a couple of hours by bus/hitching from a major centre. That’s it for now I think, I can add more later as it occurs to me. Hope it’s useful. cheero!